The Chop Shop: Hades’ Boon System Is The Perfect Answer To Replayability

One of the most vital parts to any successful escape attempt in Hades is clever Boon management. With the entire Greek pantheon competing for your affection, it’s often difficult to decide whether you’d rather stay on Dionysus’ good side or benefit from Demeter’s absurdly overpowered Rare Crop buff.

For those unacquainted with Supergiant’s mythological dungeon-crawler, Boons are rewards you get as you progress through the ascending levels of the Underworld. Each Boon corresponds with an Olympian, and each Olympian has their own specific set of buffs. For example, the aforementioned Rare Crop ability improves every other Boon you get for the entire duration of your run, but you can only get it from Demeter. If you’re lucky enough to get Rare Crop, the rarity of all your current abilities will increase by one tier for every room you progress through. Given that there are only four tiers — Common, Rare, Epic, and Heroic — it only takes nine rooms to max out every Boon in your possession, which basically guarantees your victory.

However, that doesn’t necessarily mean that less powerful Boons are without their own merit. For instance, if you’re using the Heart-Seeking Bow and encounter an Aphrodite Boon, you’ll be able to enchant your arrows with the Charm effect, causing pierced enemies to turn on each other instead of attempting to batter Zagreus (that’s you!). Meanwhile a Zeus Boon might cause chain lightning to erupt from your boots as you dash, or jolt any enemies stupid enough to make contact with you. 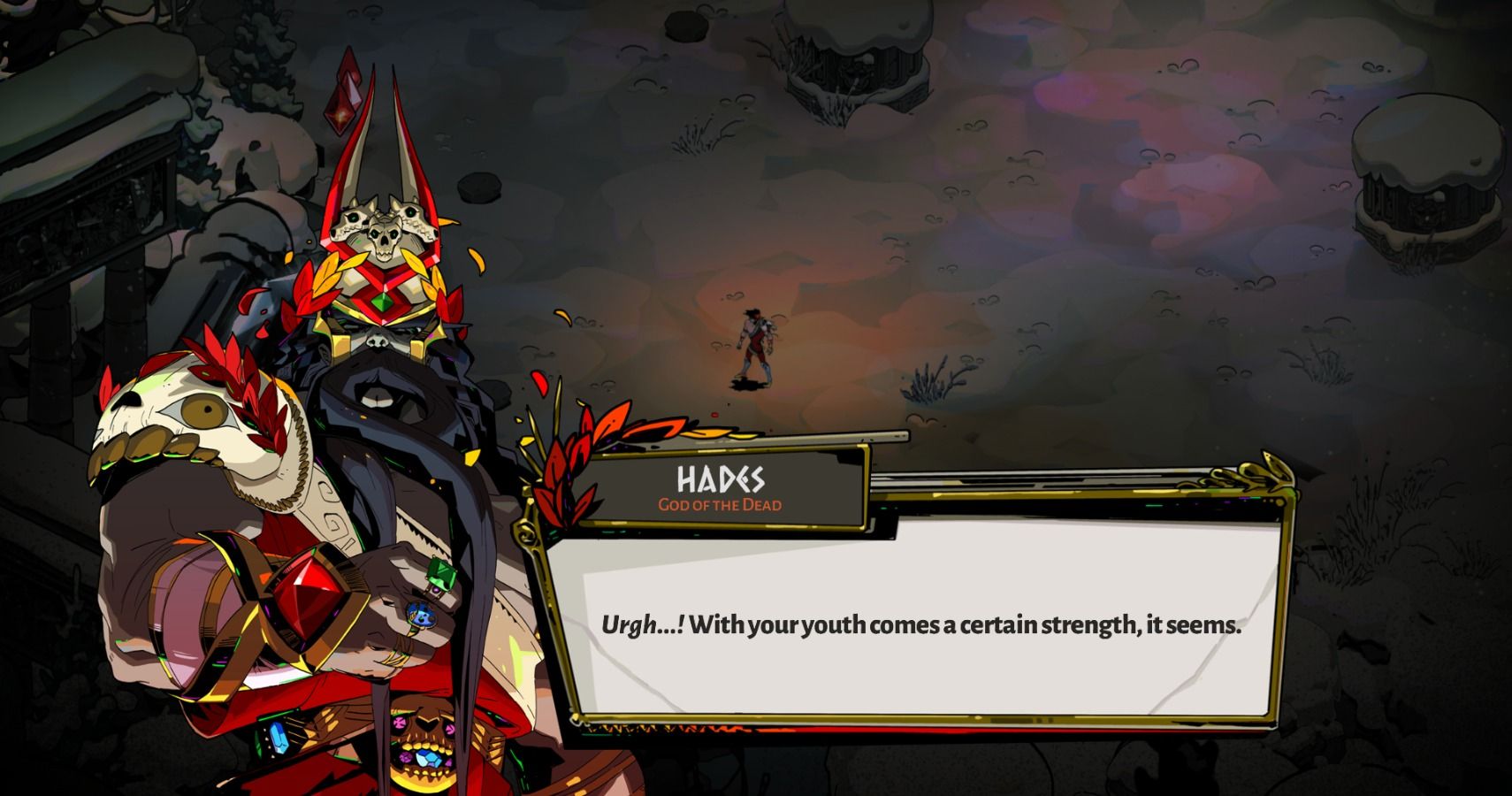 These Boons aren’t permanent — every time you die, or successfully escape and die anyway by getting stung by a bee or something, you’re reborn in the Pool of Styx in the House of Hades. At this point you’ll be able to chat to the other Chthonic Gods who reside here, including your eternally grumpy dad — Hades himself.

It’s important to note that no Boon-givers live here. They’re all hanging out on Mt. Olympus, and the reason they help you in Tartarus, Asphodel, and Elysium is so you can make your way up to them — they are your long lost aunties and uncles, after all. As a result of that, however, your only contact with the Olympians is via Boon-based conversations, meaning that you can only develop your relationship with some of the most significant characters in Greek mythology by actively replaying the same game over and over again.

But this isn’t quite as repetitive as you might think — given that Hades is a roguelike, its level design is procedurally-generated, meaning that every single run is unique. The first room in Tartarus could have a Boon, or perhaps it will have a Daedalus Hammer allowing you to temporarily upgrade your weapon. The second room will never look the same as it did in the previous run, and will likely feature totally different enemies — as will the rest of the 69 chambers between you and your dad, who is always waiting to shrug off his cape, do a big bicep tense, and try to impale you with a bident that makes Poseidon’s trident look like an old fork. 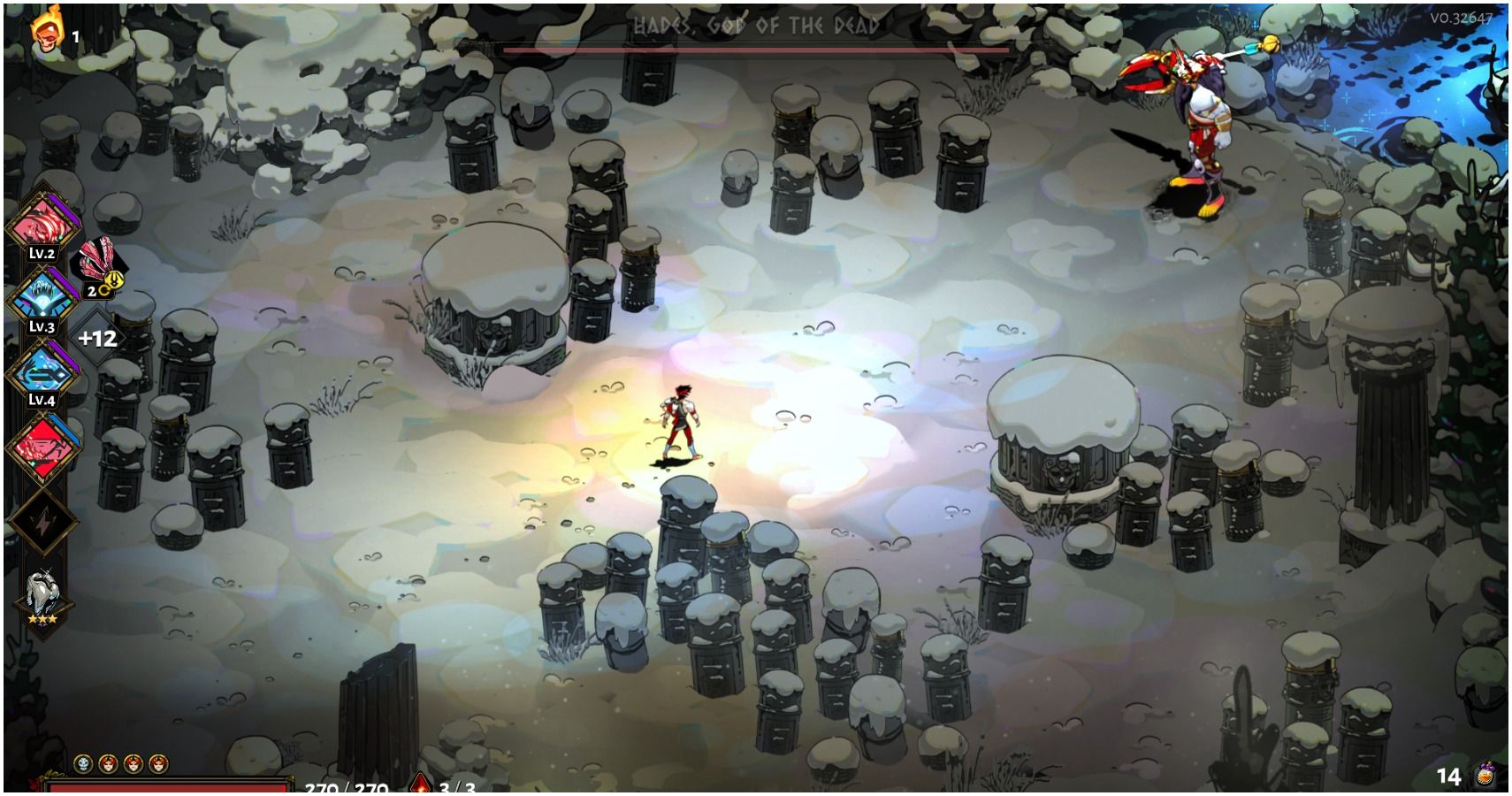 That’s usually the time you go for another untimely bath in the Pool of Styx. But the first thing you do when you emerge — aside from enduring a quip from Hypnos, the ever-slumbering God of Sleep — is speak to everyone in the House, choose whichever weapon you reckon is best, and barge straight out the gates of Hell all over again, ready for another crack at having a pint in a pub above ground.

You can get pretty unlucky from the get-go. I usually hope my first reward is a Daedalus Hammer, which makes your weapon about 50 times better regardless of which randomly-generated upgrade it offers. Most of the time, though, it’s a Boon from one of the nine Olympians who aid Zagreus’ each and every escape attempt. Certain Boons go better with certain weapons — if I’m using the Twin Fists of Malphon, for example, I’ll want Poseidon’s rupture damage — but you can usually make something work. Most of the time. At least one in ten times.

The best thing about this is that there’s rarely any Boon you’re disappointed by. I know a lot of people who swear by Ares, but I reckon his Doom damage is rubbish for anyone who plays aggressively. However, if I haven’t seen Ares in ten runs — which is approximately five hours of game time — I’ll leg it straight through whichever door leads to him to have a little catch up. I might even give him some Nectar as a present, because you can do that with the Gods in Hades. In fact, if you give someone enough, you can eventually offer them Ambrosia instead. I’m only on Ambrosia terms with Megaera the Fury right now, but if I came across one of the lads for the first time in ages, I’d probably let them neck a bottle of it just to make sure we’re still pals. 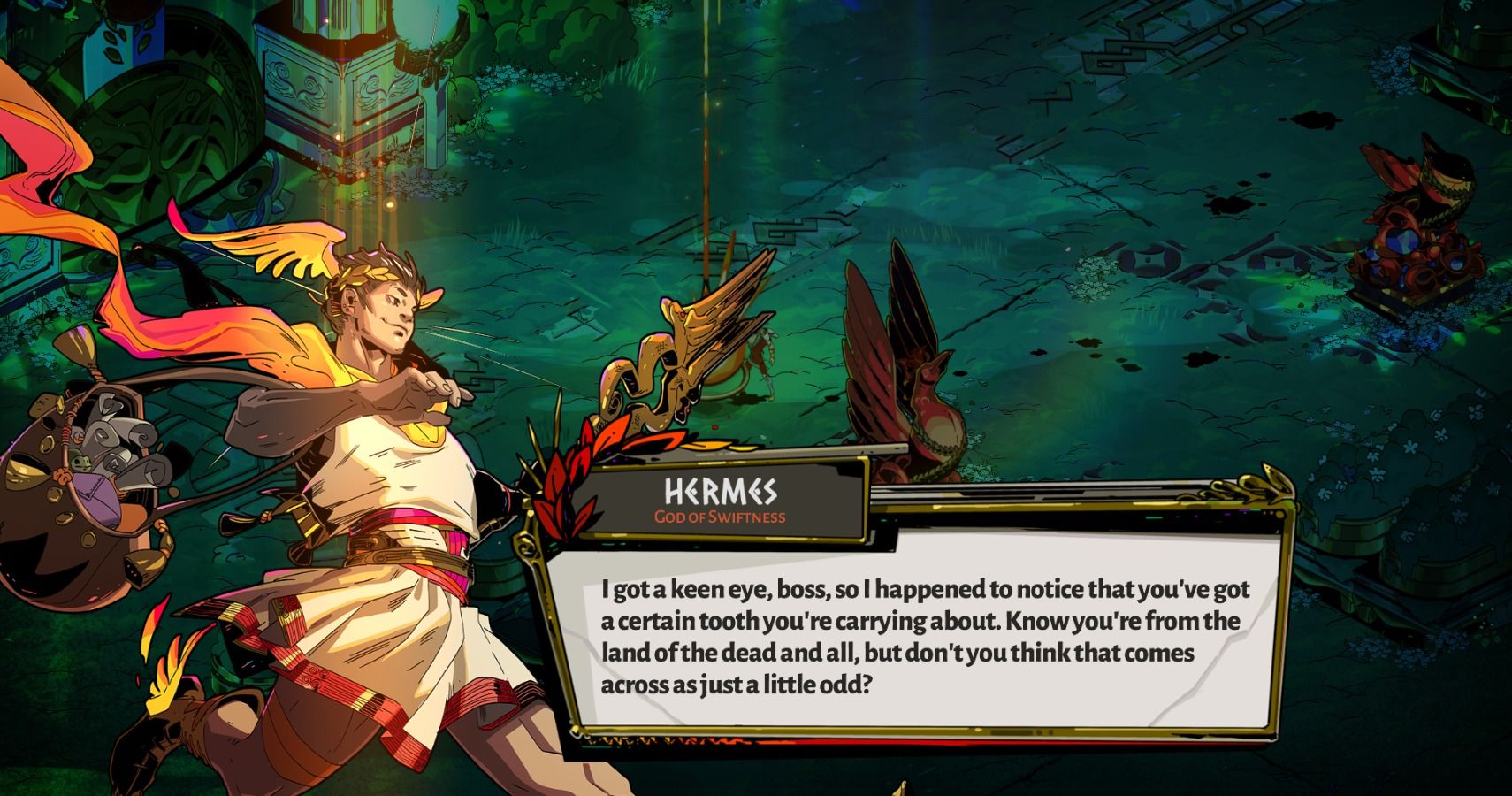 It’s a perfect blend, really — Boons are powerful buffs, but they’re so radically different to one another that they can easily make or break a run. But even the broken runs are worth seeing through because Boons also have exclusive significance to the narrative, allowing you to speak with people who are impossible to communicate with otherwise.

The very best thing about Boons, though, is the rare occasion when two Gods decide to hang out in the same room. Each of them is convinced that they’re your favourite, and so you’ve got a choice: Aphrodite or Zeus? Artemis or Athena? Dionysus, God of Wine and Ritual Madness, or Ares, God of War? Whoever you choose is usually absolutely chuffed with you, but the loser always starts huffing and puffing and tries to summon loads of bad guys to kill you. Most of these encounters are pretty tough — especially in Elysium, where some of the enemies have two lives for some reason, despite clearly living in the Underworld because they’re already dead.

After you beat everyone up and the God you defied comes out of their little sulk, they’ll apologize and give you a Boon, too. So you get double the reward and, if you’re lucky, you might even benefit from a duo Boon. This means that if you’re currently running a build that uses Boons from more than one God, one of them might go to the other, “How about we work together to give Zag an extra special Boon?” Admittedly, some duo Boons are poisonously bad and just not worth using, but sometimes, if you’re lucky, you might net yourself an absolute game-changer. 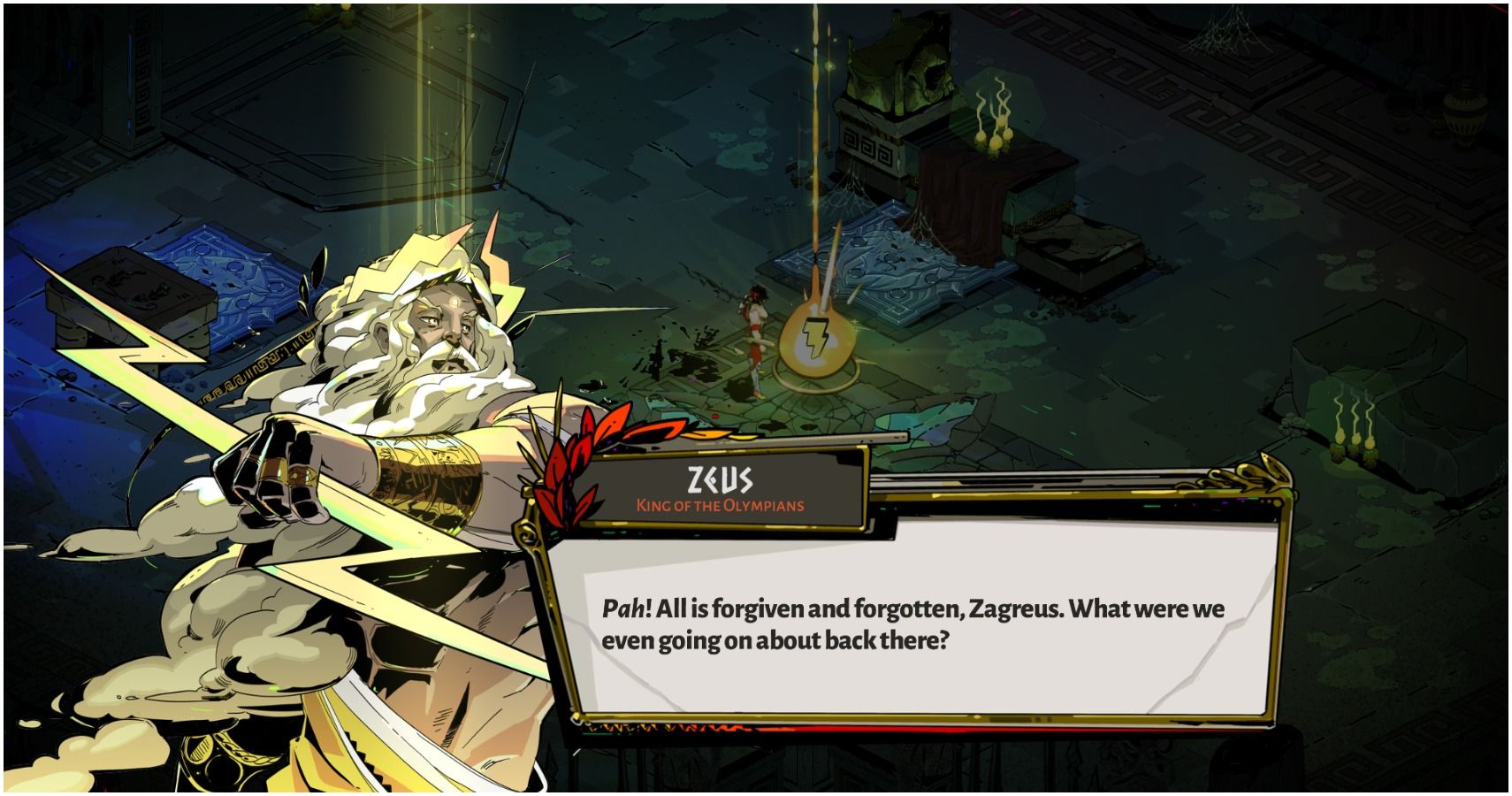 There are two things that make Hades’ Boons perfect for a game that is almost entirely defined by replayability: The fact that they are unique, randomly-generated, and only usable until the end of your run, and the fact that they serve as the sole connection between you and the characters you are so desperately trying to reach. There are still so many other builds to try, and so many other jokes to hear from Hades’ perpetually drunk surfer bro version of Dionysus.

It’s a seamlessly weaved combination of combat potential and narrative investment, and the predominant reason as to why you can play through Hades 100 times and still feel as if you’ve got 1,000 more runs left to do.

Which reminds me, it’s time to successfully escape the Underworld for the 21st time. And although the tantalizingly fresh air of life above its infernal depths is an attractive prospect, I’ll probably end up “accidentally” falling back down so I can escape for a 22nd.