Nobody Wanted BioShock 2, But It Became A Modern Classic

I remember when BioShock 2 was announced. The original game had only been released a couple of years earlier, and the overriding feeling from most was "Why?" The first BioShock told a perfectly formed, self-contained story, and that first trip into Rapture was unforgettable. Surely returning there wouldn't have as much impact—especially so soon. Andrew Ryan's undersea dystopia was still fresh in people's minds. Also, the discovery of the place, beginning with that first bathysphere descent, was a big part of Rapture's appeal. It was exciting because it was filled with mysteries. Who built this weird place? And what happened to it?

BioShock 2 launched for the Xbox 360, PS3, and PC in February, 2010, and people were ready to dismiss it. But those who gave it a chance found a confident, imaginative, and intelligent sequel that was the equal of the original—and even improved on it. New developer 2K Marin could have easily churned out a lazy rehash to make a quick buck. But instead it put a lot of love, effort, and care into using Rapture to tell a very different story—while also staying true to that distinctive BioShock feel. You honestly couldn't ask for a better follow-up, and the sequel that nobody wanted is now widely regarded as a modern classic.

The first BioShock was set in the aftermath of a civil war, and the city was appropriately wrecked by the conflict. But in the sequel, which is set 10 years later, the place is a ruin. The freezing water of the Atlantic Ocean has all but reclaimed the abandoned city, with some districts being completely flooded, and others rotting away in the brine. This was a bleak setting the first time around, but now it's totally dilapidated—which makes it an even more effective horror setting. It's still identifiably Rapture, with its classy Art Deco luxury, but an altogether grimmer, darker, and more hopeless take on those familiar green-tinged, murky corridors. 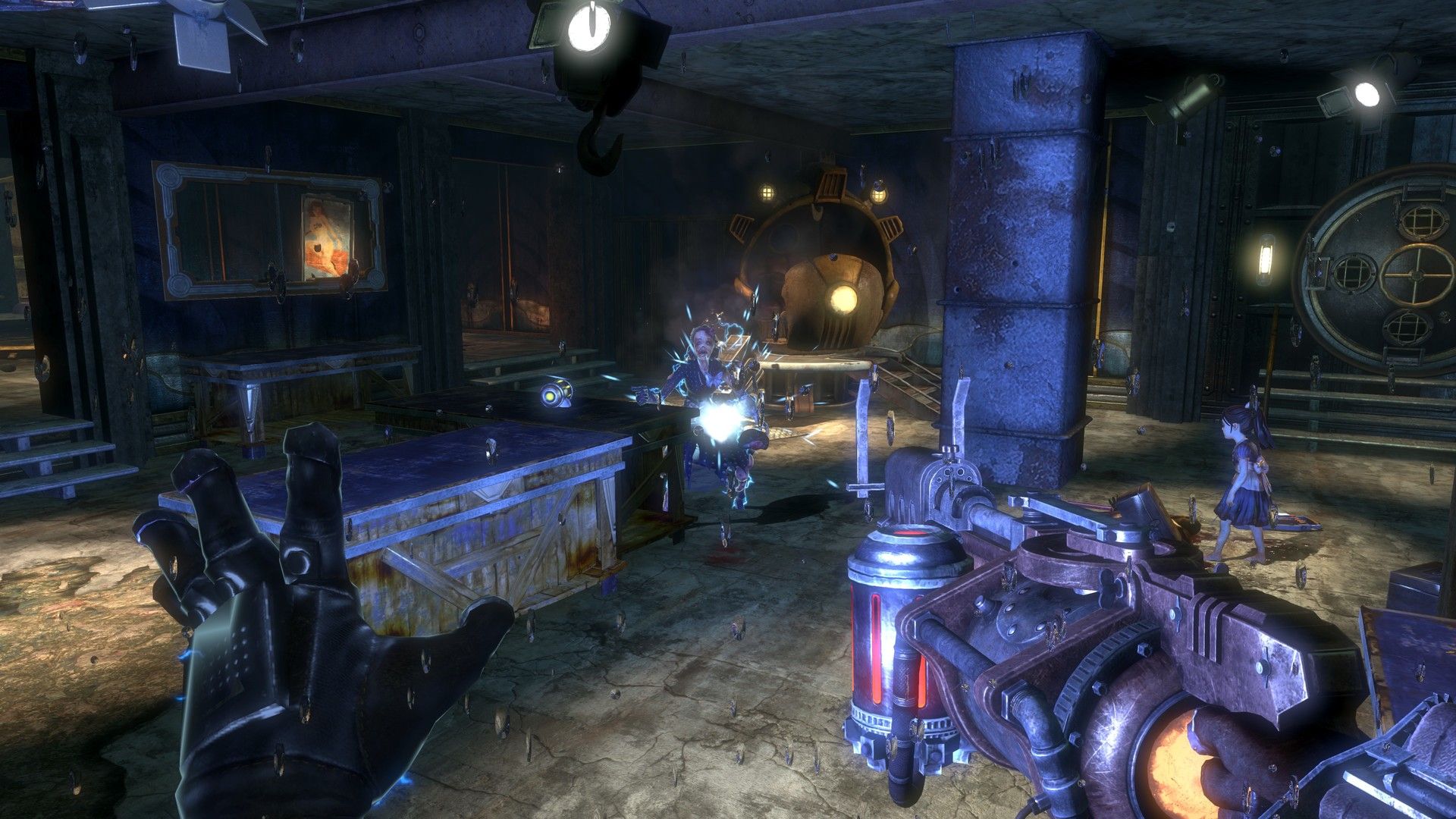 Further separating BioShock 2 from the original is the fact that, this time, you play as an experimental Big Daddy called Subject Delta. You've been betrayed and separated from the Little Sister bonded to you, and are on a mission to reunite with her—a job made difficult by new villain Sofia Lamb's army of Splicers, and other horrors, including a new addition to Rapture's bizarre ecology: the terrifying Big Sister. While Andrew Ryan was a worshipper of the self, Lamb believes in the power of the many. She's exactly the kind of charismatic communist Ryan feared would one day infiltrate and take control of his beloved city.

Reflecting your job as a Big Daddy, you occasionally have to protect Little Sisters as they drain ADAM from corpses, which brings waves of Splicers rushing in to take the genetic miracle juice for themselves. Suddenly you're a part of the ecology of Rapture that you witnessed so many times in the first game. It's also a nice showcase for the improved combat. Being able to dual-wield Plasmid powers and weapons simultaneously makes for much faster, more aggressive, and more fluid combat. I just wish you felt more like a Big Daddy, because Delta, despite wearing a heavy diving suit, moves as nimbly as Jack. The controls needed more weight, to make you really feel like one of those lumbering, groaning behemoths.

When it comes to tests of morality, BioShock 2 is far superior to the original game. Your missing 'daughter', Eleanor, looks up to you, and your decisions can dramatically alter what kind of person she becomes over the course of the game. At certain points in the story you're given the choice to kill or spare certain characters, and your actions will shape Eleanor's attitude towards life and death. This is a lot more impactful than choosing whether to kill or spare the Little Sisters in the original game, because the emotional stakes for Subject Delta are infinitely higher. It's not just your own conscience you have to worry about, but hers too. 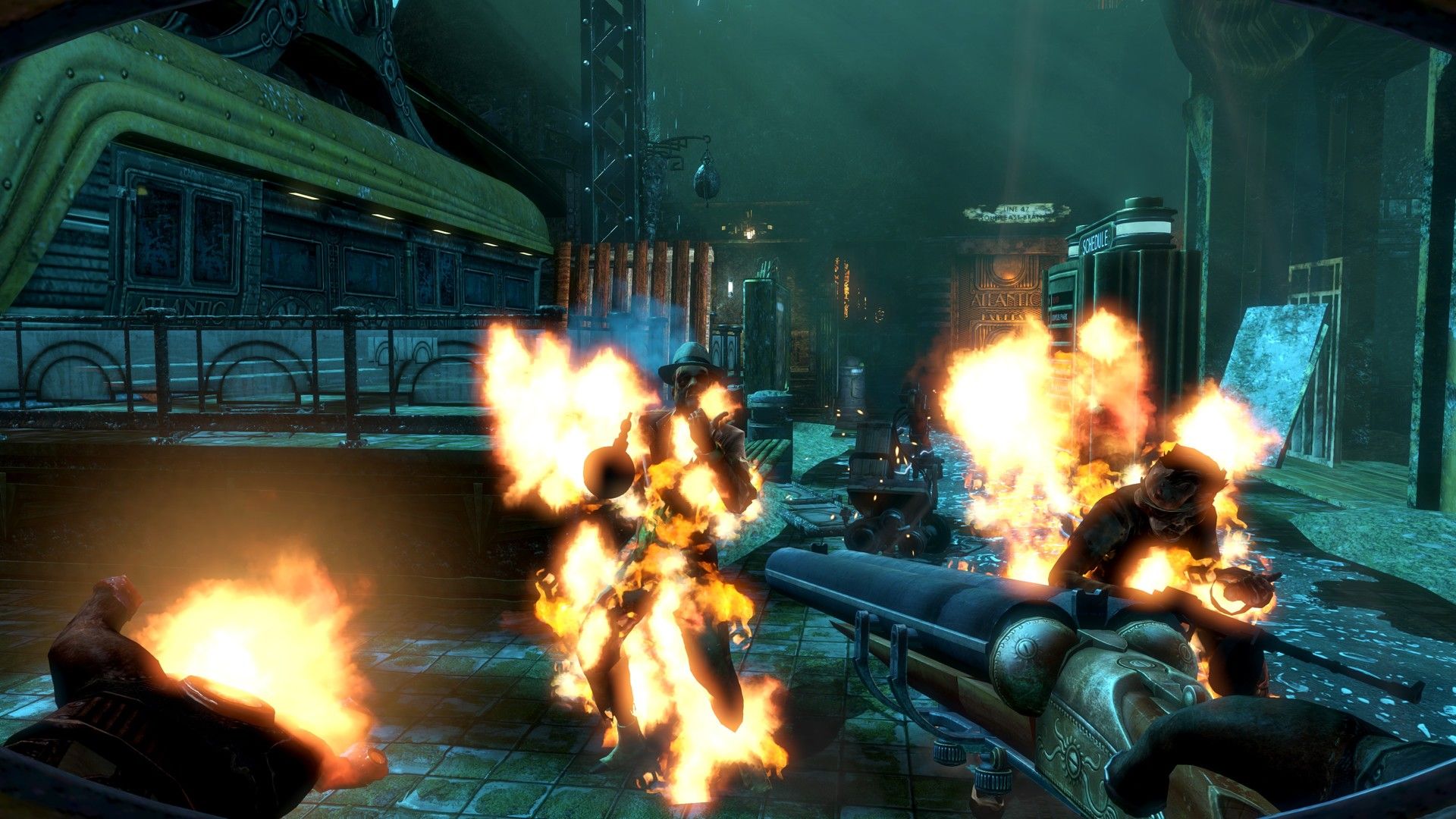 While Rapture doesn't hit as hard as a location in BioShock 2, with most of its mysteries already revealed, the sequel takes us to some interesting places. There's nothing here to rival locations like the magnificent Fort Frolic, but we do get to see another side of Rapture. The first game mainly focused on the lavish playgrounds of the rich and powerful, but BioShock 2 shows us where the working class people—the ones who kept the city running in its glory days—lived and worked. Pauper's Drop, an old maintenance facility that was turned into a slum, is full of emotional stories about the city's regular citizens and their struggles.

BioShock 2 is a better game than BioShock in many ways. It has a more mature, understated approach to morality and the combat is significantly better. It just suffers from revisiting a setting that already thrilled us once before. There are still some big revelations about the city and larger BioShock universe, though—and some brilliantly memorable set-pieces, like seeing the city through the eyes of a Little Sister, the Big Daddies suddenly transformed into glowing, gold-armoured angels. 2K Marin was given an impossible task, but it made its own mark on BioShock, and the result is arguably the best game in the series.