Move Over, Diddy – Donkey Kong Almost Had His Own Racing Game

A sequel to the classic Nintendo 64 game Diddy Kong Racing by the name of Donkey Kong Racing was once going to be a thing. Unfortunately for fans of the former, though, this idea would never actually see the light of day.

Details of Donkey Kong’s eponymous racing game have been all but forgotten and veiled by the mists of time, but as usual, LostMediaWiki has stepped in to save the day by providing all that we know (and probably ever will know) about the game to date. Buckle your seatbelts, kids, and get ready to take a drive down You-Probably-Didn’t-Know-This Boulevard.

The First & Only Appearance

During 2001’s E3 event a teaser trailer was shown, introducing the world to Donkey Kong Racing. The trailer portrayed a string of bonkers-looking scenarios you would expect from a Donkey Kong game, which probably got every kid (and nostalgic adult) in attendance all riled up in anticipation.

The game was being developed by Rare Ltd. (who most recently developed Sea of Thieves), and was supposedly meant to be released the following year for the Nintendo GameCube. But alas, the game’s E3 reveal was destined to be its first and only appearance in any official form. Before we get to the reasons for this, though, here’s a bit more about what we missed out on.

“Let’s Ride” was the game’s catchphrase. Yup, that’s pretty much what you would have been in for – a whole lot of, ahem, riding. Specifically, upon the backs of elephants, wasps, swordfish, rhinos, and a bunch of other animals. Looking at the trailer, you’ll also notice that these creatures have come straight outta the Donkey Kong Country series, featuring appearances from well-known Animal Buddies such as Ellie the Elephant, Enguarde the Swordfish, Zingers the Wasp, and Rambi the Rhino.

Check out the trailer below:

This would differ from the game’s predecessor Diddy Kong Racing – released in 1997 when it became one of the fastest-selling games of all time – in which you ride actual vehicles. Animals themselves were the next logical step, of course.

Apparently, each animal-vehicle would have their own special abilities, colors, and sizes which would affect how you could navigate your way around the game’s different tracks. So big animals like the rhino would be perfect for crashing right through obstacles, while the zippy wasps would presumably allow for easier and faster movement around obstacles.

Return Of The Kongs

As you’ve probably already gathered from the trailer, the game would have let you play as Diddy Kong, Tiny Kong, Kiddy Kong, and Donkey Kong himself. It would be reasonable to assume that other members of the Diddy Kong Racing cast would have also made an appearance, seeing as Taj the Genie also pitched up in the trailer as a playable character. Although not shown in the trailer, both Lanky Kong and Crankey Kong were also playable, as revealed by an internal render for the game.

Seeing as a multiplayer mode was intended, which would allow up to four players to take part, it seems you’d be able to race it out against each other as your favorite Kong. You’d also be able to upgrade your chosen steed to “true thoroughbred” status by picking up fruit and various other prizes for them along the way. 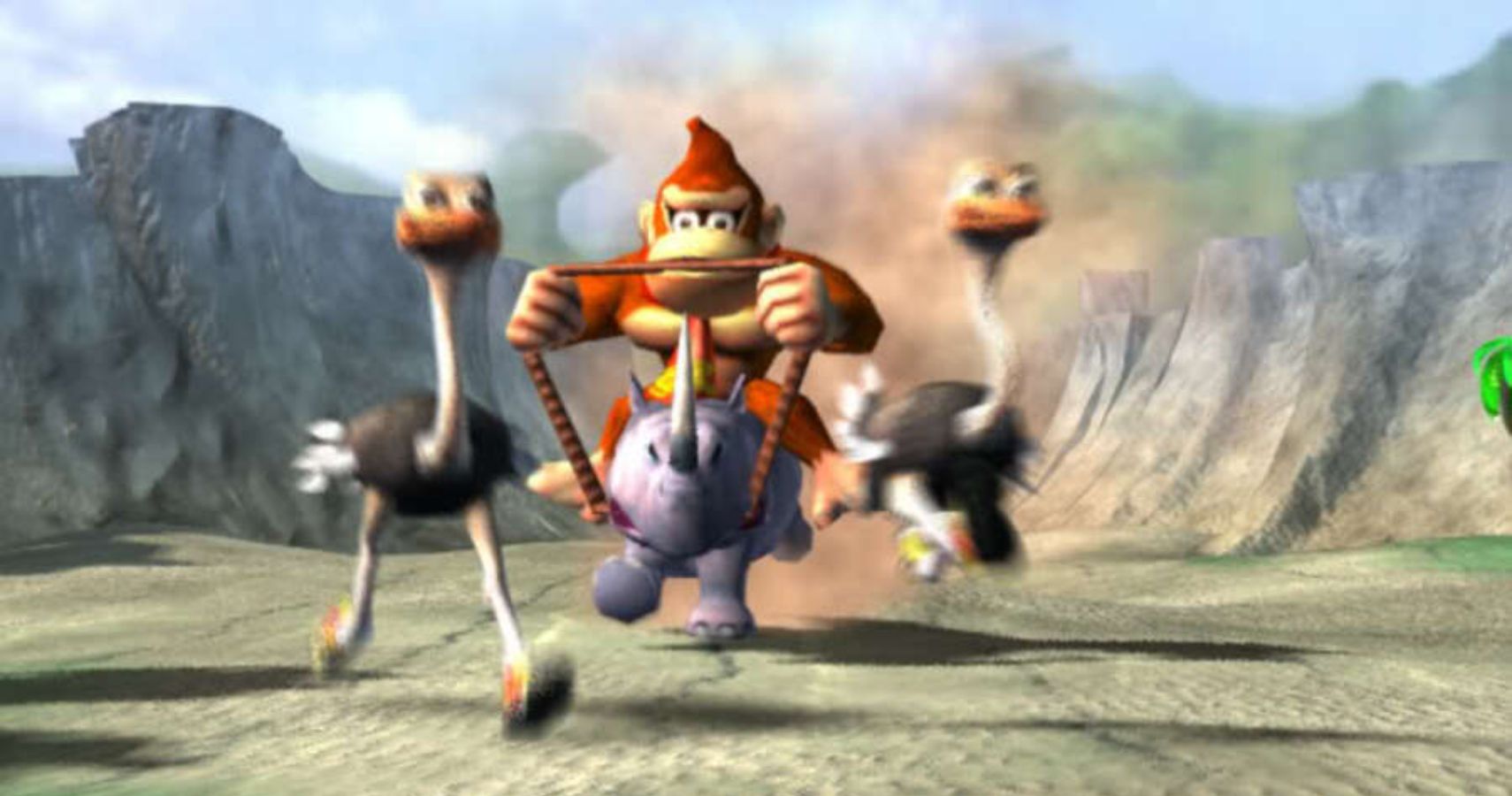 So why was this little charmer canned? Predictably, it was because of a money thing. Specifically, a lack of funding from Nintendo for Rare Ltd.’s project. Rare was also acquired by Microsoft in 2002 for a cool $375 million and subsequently lost the Donkey Kong IP. But weirdly enough, in 2004 Rare confirmed that it still hadn’t completely forgotten about Donkey Kong Racing. There was a bit of fine print, though:

It’s not called Donkey Kong Racing anymore, it’s not on the GameCube anymore, and by this point, I’d imagine so little of the original art and code remains that it’s barely the same game anymore, but yes it’s still coming out in some form.

This replacement game eventually took on the name of Sabreman Stampede, but in 2005 that ended up getting cancelled too.

Unfortunately, it seems as though the universe was dead set against this game ever becoming a thing, which, considering the big shoes it had to fill after Diddy’s game, is perhaps not really that big a loss. Plus, the Donkey Kong series didn’t exactly die out at this point; it still had a long road of success ahead of it.

Still, rest in peace, Donkey Kong Racing. We’re sad we didn’t get to ride with you.