Mass Effect Has Me Feeling Guilty About Virtual Love Triangles

Commander Shepard is such a slut. Not intentionally so, but my version of the galactic saviour accidentally found herself in an awkward love triangle amidst the Normandy when she should have been focused on putting a stop to Saren’s evil plans. But there’s always time to relax between stopping evil hypnotic bugs on Feros and navigating the obnoxious corridors of Noveria – even if it means leading on Liara T’Soni and Kaidan Alenko until the duo confronted me for being such a hussy.

I had no idea this was a thing, I’d just been picking the friendlier dialogue choices for both characters even if it ended up fostering a romantic connection. Now, the two of them were asking me to choose between them, and I was too scared to ask if I could ‘have both of them’ if it completely ruined both of my potential paths to operatic space love. Kaidan was obviously the saltier of the two, almost making my attraction for other women seem like a dirty little secret since I wasn’t falling victim to his milquetoast heterosexuality. I set the record straight, even if my Shepard was anything but.

My heart was with Liara, so I told him exactly that, so he grumpily resigned to being a close friend to the galaxy’s grooviest pansexual spectre and went back to doing whatever he does outside my room whenever we aren’t on missions. He’s still a lovely guy, and it was totally my fault for leading him on, but I didn’t expect this whole situation to make me feel so guilty in reality. I had just had a chat with the Council about saving the galaxy, so the last thing I needed was for two members of my crew to confront me about feelings and shit. I almost left him to die on Virmire so I could rid the bridge of any potential cringe, but I left that honour for renown space racist Ashley Williams. 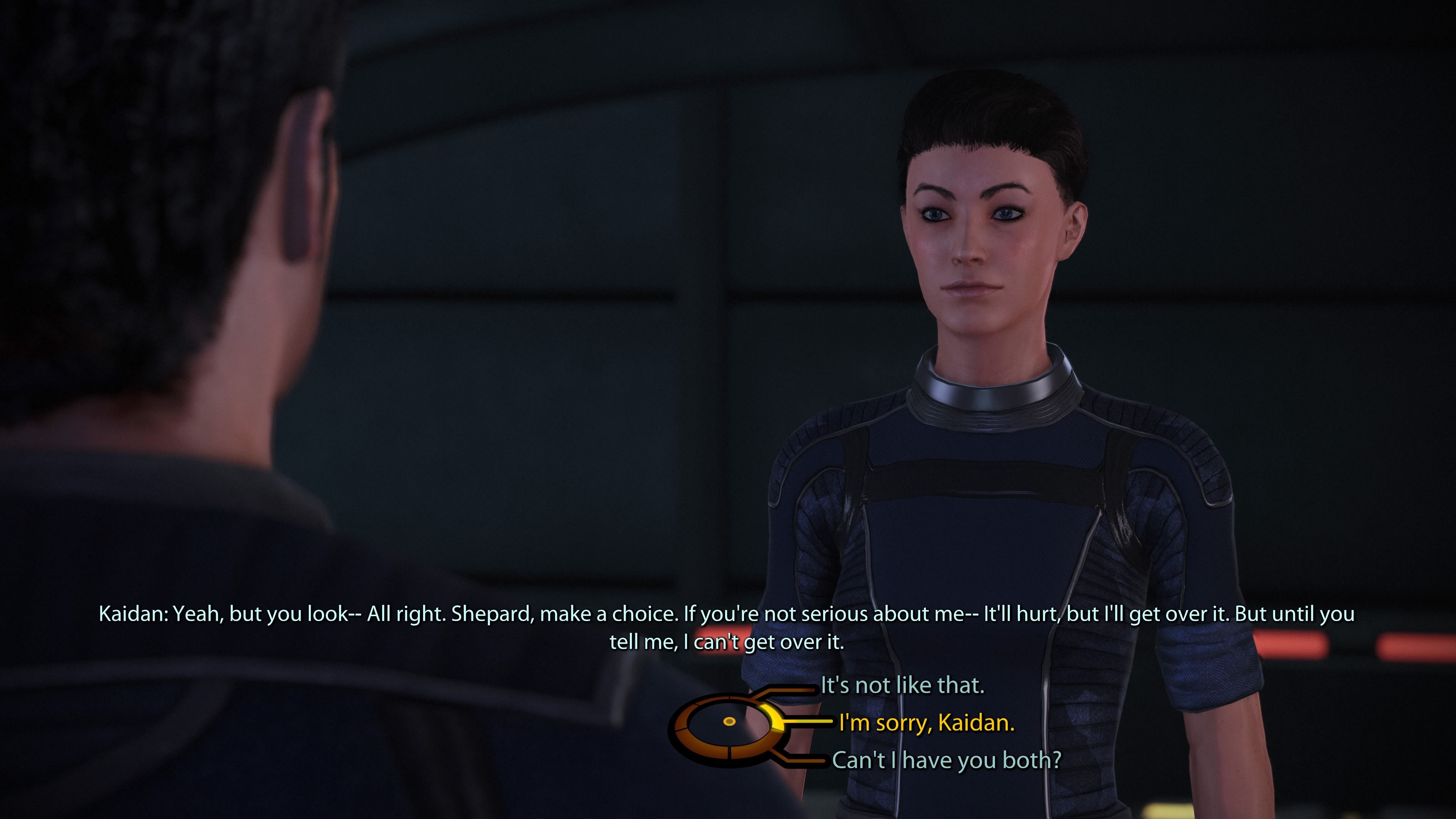 So I fumbled my way through the conversation like I would in the real world, hoping no feelings were hurt beyond repair as I tried to cling onto the real relationship I wanted to pursue. Liara isn’t hugely familiar with the process of human emotions, so she seems content with my honest commitment to our relationship before retiring to the medical bay. Kaidan is less convinced, his voice awash with contempt as I tell him there’s nothing between us, the biotic failing to hide his contempt beneath a guarantee that he will deal with this like a professional. It’s okay for him to be upset, I screwed him over, and all because I didn’t want to risk hurting his feelings in the first place. Saren isn’t the only one being devastated in the first Mass Effect if you’re in my shoes it seems.

Much of the romantic dialogue in Mass Effect feels outdated and stilted, deeper relationships forming seemingly out of nowhere purely because BioWare wanted you to feel that much closer to your crewmates. I was 13 when I first played the series back in 2007, so I couldn’t see the lacking depth in conversations that developed into romance far sooner than they should have. I only had a handful of chats with Liara before I was being offered the blue alien booty, and compared to later entries in the series this character development feels almost juvenile. 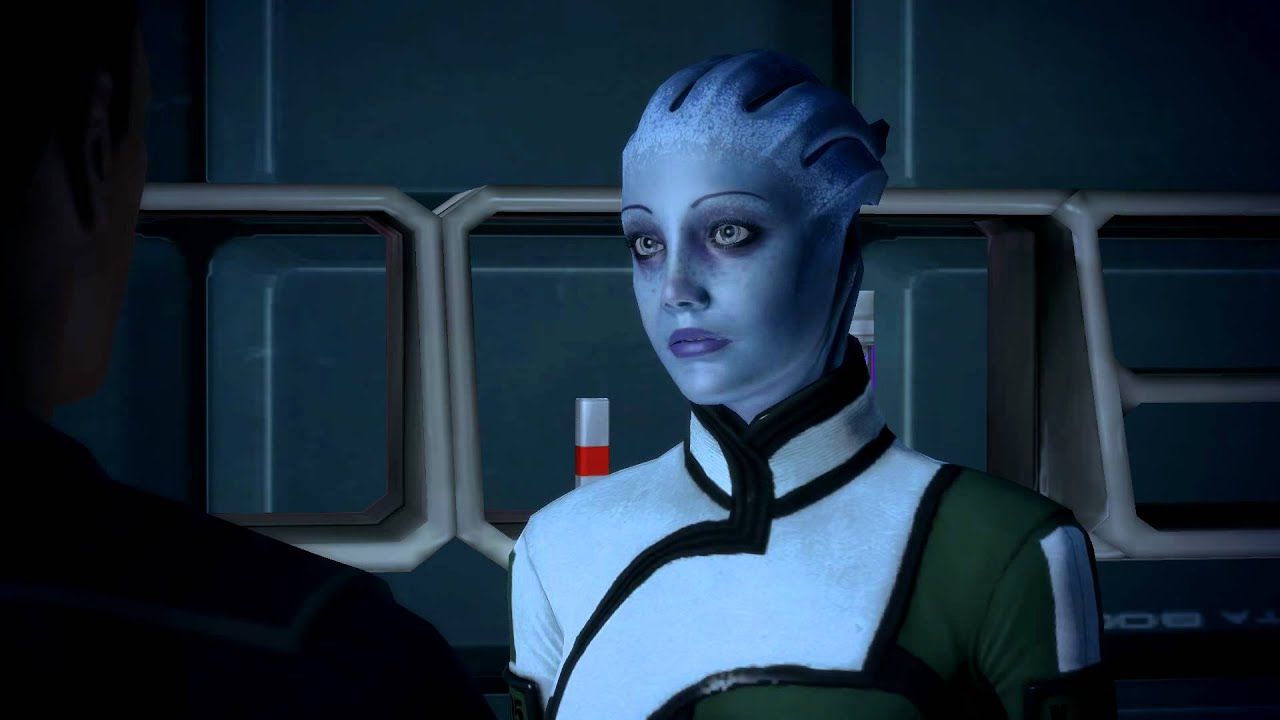 Liara’s background and the stories she has to tell are downright fascinating, and it feels cheapened somewhat when the final destination before our potential death at the hands of Sovereign is a sudden fling. I’d rather talk, cuddle, and confide in one another and if such a connection resulted in sex – so be it. However, Mass Effect was released in an era when games remained a solidly heteronomative venture, so sex felt like the natural conclusion to such a path. Liara, I’m really sorry about your dead mother being hypnotised by an unstoppable alien force, but we need to smash before it’s too late. The sequels would make these relationships feel far more substantial, with the first game going through some teething problems it would inevitably supersede as it grew into something truly memorable.

But even today, its depiction of awkward galactic love triangles felt unexpectedly relatable. I’d never encountered it in previous playthroughs, or simply couldn’t remember it, and it was an encounter that caught me completely off guard. It held the same level of drama as trying desperately not to kill Wrex on Virmire over the Genophage, only I was potentially more worried about the potential outcome. As I play through the trilogy for the first time in almost a decade, I hope encounters like this continue to surface, since personal human trauma can be equally as impactful as saving the universe if it’s told with the right level of conviction.

I’m really sorry, Kaidan, but I didn’t leave you to die on Virmire though so it could have been a whole lot worse. Broken hearts can heal but you’d have a harder time walking away from a nuclear explosion. This love triangle was incredibly awkward, but it also had me invested to an absurd degree, so I’m going to keep this style of play as I move forward. I’ll report back if anything else ridiculous happens as I move forward. Fingers crossed I don’t break anymore hearts…