If you’re playing through the Mass Effect trilogy for the first time, you will notice a drastic change after the first game. I could be pithy and say ‘you’ll notice the games get good’, but I’m sure a lot of folk would argue the exact opposite. Regardless of where you fall in that divide – I actually like all three but do feel the first is the weakest – you will notice a lot of changes. The icy, minimalist art direction switches to a blorange tone, with much more densely packed settings. The focus switches from uncharted worlds to alien architecture, and the Normandy feels like a much bigger part of your story, with loyalty missions and tasks to complete for your crew. Then the big one; it ceases being an RPG with shooter elements and becomes a shooter with RPG elements. That means the armour system changes, and with it, we miss out on Wrex’s bubblegum armour.

In Mass Effect 2 and Mass Effect 3, your crew has a standard set of armour. They will unlock a new aesthetic after you complete their loyalty mission, and they may even have a third with a DLC pack, but for the most part, you get what you get. There is some logic to this – it means that each squadmate has a look specifically designed for them. Miranda, Thane, and Samara in Mass Effect 2, plus Liara in Mass Effect 3… it’s hard to imagine that any old armour you find lying around could rival these. Still, it’s in changes like these that the RPG nature of the game melts away, and that means fewer opportunities to personalise your crew.

The first Mass Effect has a pretty weighty equipment system, and it’s not even that complex – it was just designed in 2007 in a way that even back then, wasn’t cutting edge. You pick up weapons and gear all the time, but then have to decide whether to reduce them down to gel – somehow – or add them to the menu then go through each item one by one, for all five squadmates and for Shepard themselves, to decide what gear you’re giving them. Plus, with different armour weights and certain sets not being transferable across species, it’s easy to simply not bother. On the lower difficulties, you can get away with just upgrading your main gun once in a while and using your powers, so maybe you haven’t bothered. You absolutely should bother though, because otherwise, you miss out on Wrex in his bubblegum armour.

There are only so many different designs in Mass Effect – Shepard alone actually gets far more customisation abilities and different sets to try out in Mass Effect 2 than the whole squad in the first game. Ashley arrives in the game in a white outfit with a pink trim, and for some reason, this design is later repurposed for Wrex. Just look at him! 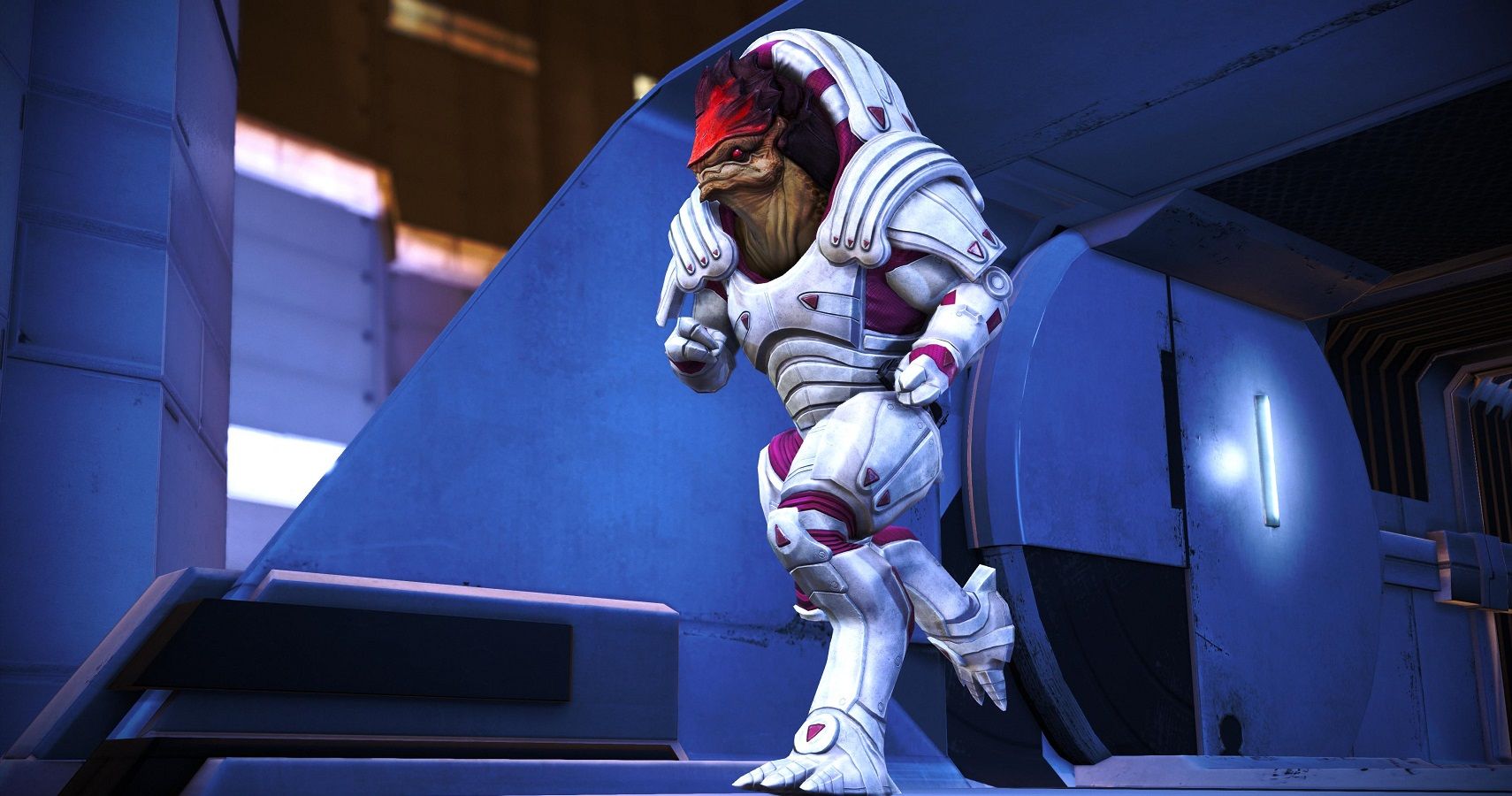 This is so ridiculously out of character for Wrex, and if I had to praise the first Mass Effect for one thing it does better than the rest, it’s this. Not just putting Wrex in the daft outfit, but in giving us far greater control. While we still get choices in the two follow ups, it feels like a lot of the path is laid out, with our choices merely being how to walk it. Wrex arrives in a gorgeous and thematically interesting red armour plating, and the two sequels would have just kept him in this, because it’s how they want him to look – hell, the third game does. However, the first game doesn’t try to assume direct control of Shepard or your playthrough, and that means you can put Wrex in adorable bubblegum armour if you want to. I love the sequels much more, but I’ll never get that chance again, and that’s what makes the first worth sticking with.