As I sat staring down at my Nintendo Switch screen, my eyes glazing over as I gazed straight through the screen, I had a single prevailing thought: “This game isn’t very good.” It was early on in Heaven’s Vault, and I was tasked with deciphering yet another piece of ancient text with absolutely zero context clues. The text in question is a series of squiggly lines and dashes, and I’ll be damned if it’s supposed to be any kind of language I should be able to interpret. So I made some guesses and just continued on with the game.

But then, slowly, things started clicking into place. I would still, often, have absolutely no idea what a new word meant when presented to me, but I would have better indications to guide my guesses. Lines that appeared to fall from above represented light, and horizontal, wavy lines were a clear indication of water. Slowly I started making the correct guesses, and almost impossibly, I felt like I was genuinely uncovering and translating a long-lost language. Of course, I’m not, and the game is doing more than enough to guide my hand through the process, but for a while, the satisfaction was strong. 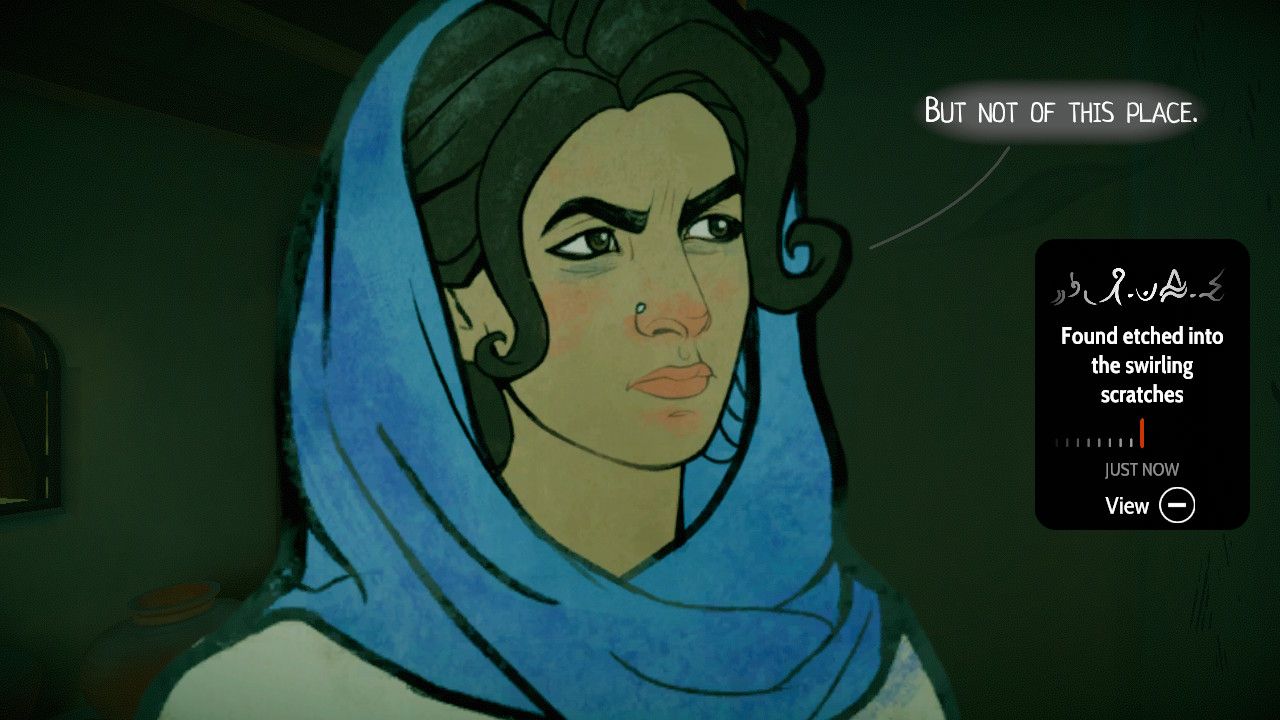 Heaven’s Vault is a game about archaeology set in space, which is a setting that shouldn’t work, but everything manages to be tied together just tidily enough. You take the role of Aliya, a young archaeologist, and she is quickly swept up in a brand new mystery. A respected Professor has gone missing, there are secrets hidden deep within the Nebula, and it is up to her and a new robotic companion named Six to uncover the truth, and follow a breadcrumb trail left by those that came before.

Heaven’s Vault certainly isn’t an action game and there’s no combat. Instead you will explore settlements on new planets, converse with the locals (usually about how much they hate visitors like you), and translate the Ancient language into something that you can more easily understand, and it’s this process of translation that really drives the game forward. As I mentioned, early on this game feels obtuse and frustrating. Slowly, though, you are able to interpret the most basic symbols and words, and you’re able to string them together into long, complex sentences. You transform from someone staring at a foreign language, to someone who is able to read it. It’s the equivalent of living in a country where the dominant language is not your mother tongue, and finally understanding enough of that language to read the menus in restaurants.

When you encounter a new word for the first time you’ll be given around four choices on what that word can be, and you will be slotting words in left and right with no real indication of whether any of them could be correct – this is the point where the game is most frustrating, as you’re making choices, but whether or not any of those choices are good or correct is beyond you. Then, eventually, you’ll receive a confirmation that a word you attempted to translate earlier is correct, and another, and another, until you can finally piece together the sentences you find without struggling. 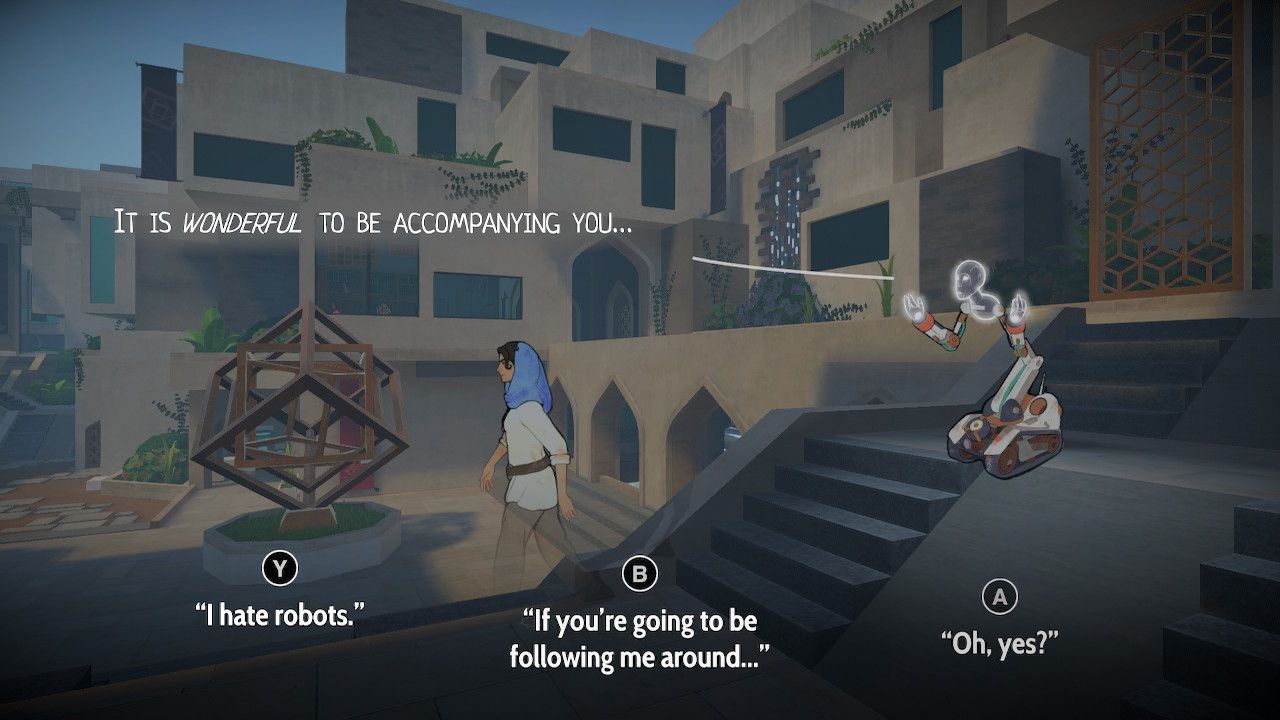 This slow but steady sense of progression is excellent, and is exactly what will carry you through most of the time you play Heaven’s Vault. While there is a storyline surrounding the missing professor, buried ancient civilizations, and more, it’s not what you’ll be playing the game for. Similarly, exploring a planet which has a proud tradition of selling slaves for labour sounds like it could be interesting, but outside of a couple of conversations with slaves and their traders, it makes no impact on the larger world Heaven’s Vault is trying to build. While a fairly unique Middle-eastern-inspired sci-fi landscape has been created here, it doesn’t feel congruous with the gameplay at hand. Sadly, I never grew to care about Aliya, or Six, or any of the other characters, I just wanted to translate the text.

But so quickly even the translation efforts go from this mysterious thing you’re uncovering, to something far more rote. Before I knew it I had transitioned from staring at the symbols which make up each word and trying to interpret their meaning from their shape, and I had moved on to slotting in whichever of the four words the game presented to me in a way that makes sense. As long as the theorised translation made sense in English, then it was probably correct, and I discovered that very quickly. Your translations will either be confirmed or proven wrong once you find the same word in other inscriptions, slowly giving you enough context clues to identify each inscription you come across – but this also means there isn’t actually anything to lose or risk when you make your translations. You can just fill the words in with whatever you think might be closest, and eventually, you’ll be proven wrong or right. Attempt the translation enough times, and you are pretty much guaranteed to be correct. 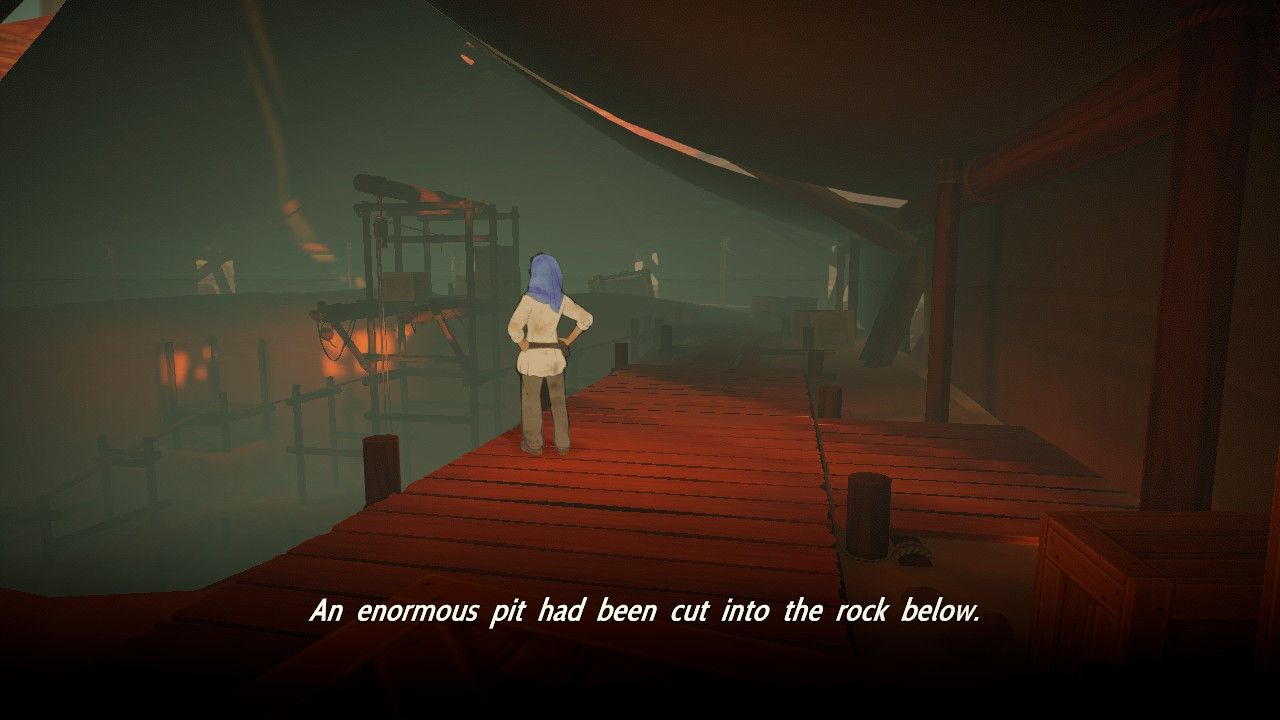 This realisation sucked so much of the fun out of Heaven’s Vault, and it was devastating. At first I really liked the 2D hand-drawn characters moving around the 3D world, and then that became typical and at times stilted. I liked the subtle musical cues and the very rare instance where a voice actor would speak up for Aliya, but that only served to highlight how deathly silent the rest of the game was. The planets you explore are barely a handful of rooms in each instance, and while all of the characters you meet and talk to are well written, they’re not charming or memorable. The two truly redeeming features Heaven’s Vault has are the very unique and initially engaging translation mechanic, and the admittedly beautiful art direction. But once you’ve played enough of the game for those two aspects to become standard, there’s not much left.

Heaven’s Vault is a game that was made with love and passion, that much is clear. This is a fascinatingly unique concept for a game, and the Ancient text must have taken a team months upon months of planning and work to put in place, but that doesn’t necessarily translate into a fun or engaging experience when stretched out into hours of vague and unsatisfying puzzling.

Next: Atelier Ryza 2: Lost Legends & the Secret Fairy Review: A Legend All Its Own 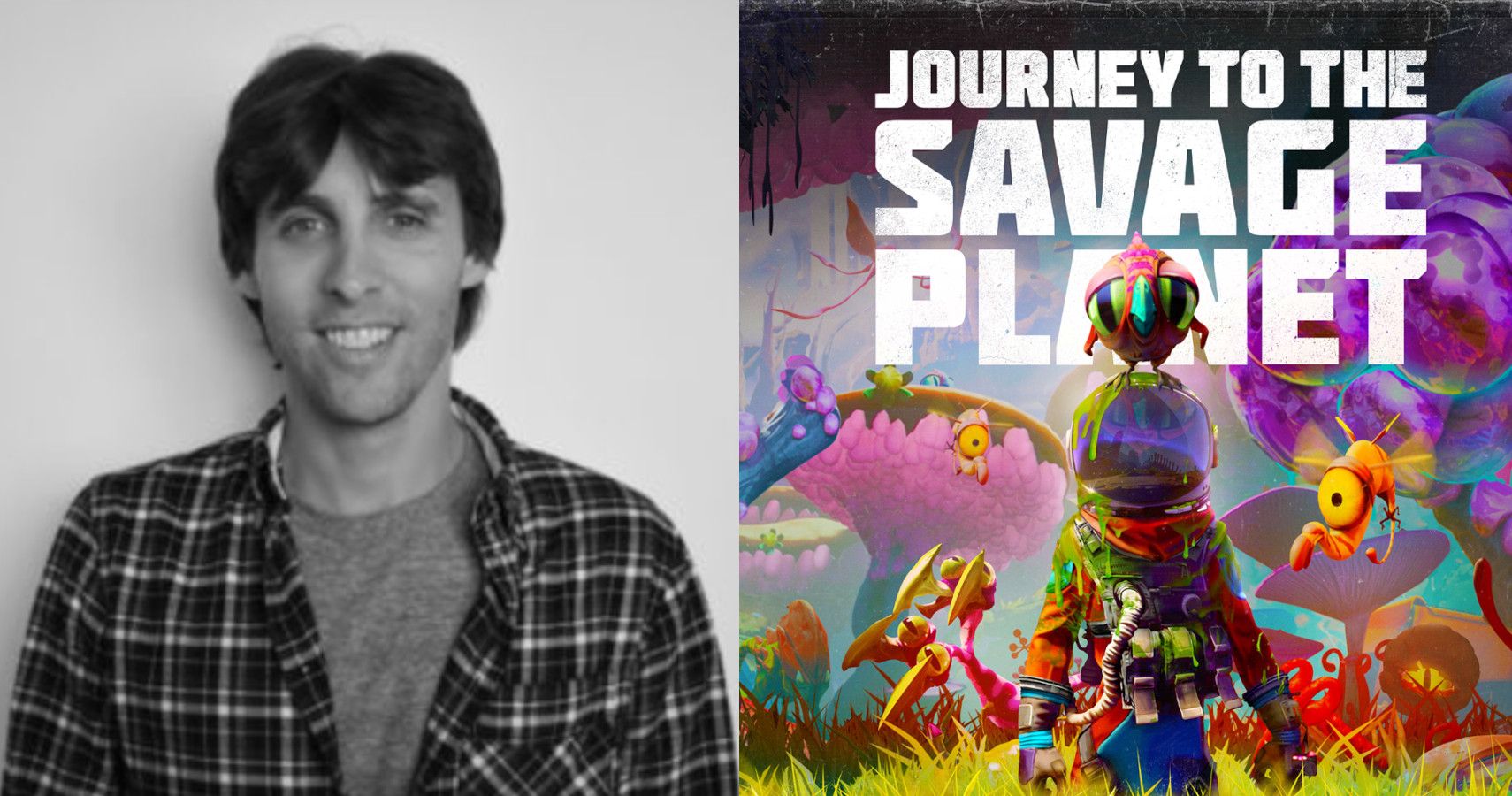