Ghostwire Tokyo Review: I Ain’t Afraid Of No Yokai

Walking the neon-drenched streets of Ghostwire: Tokyo is strangely hypnotic. Japan’s capital is known for being occupied by millions of people, all going about their business as if on autopilot, spurred forward by the desire to live their lives to the fullest. Each person you pass has a story to tell and trauma to explore, hidden away in a society that often deems such vulnerabilities a weakness to be ashamed of instead of embraced.

So they keep them hidden away, with death being their one and only confidant. To discover these secrets feels like a privilege, and it’s also where Tango Gameworks’ supernatural shooter comes alive, providing the appropriate freedom to uncover distinct anecdotes in the aftermath of death. When all of these occupants are taken away and only their spectres remain, it becomes so much easier to piece their individual stories together.

I find myself pilfering through mobile phone messages and discarded leaflets to figure out why hundreds of thousands of people have vanished without a trace, leaving central Tokyo as a playground for spiritual visitors and occult terrorists intent on bringing this city to its knees. I’ve never played a game like Ghostwire: Tokyo before, and while it is hamstrung by a handful of notable shortcomings, the mere act of making this city my own and slowly bringing it back to life is one of the most memorable gaming experiences I’ve had in quite some time. One day a cabal of evildoers march into Tokyo with myriad supernatural forces standing beside them, wiping out thousands of innocent people in an instant. Only their clothes and dwindling spirits are left behind, Shibuya and its surrounding prefectures now awash with crashed cars, abandoned animals, and signs of life that were snatched away in a matter of moments. You play as Akito, a young man who is spared the same fate when inhabited by a spirit known as KK. To stay alive you must work together, both to save your ill sister – who is somehow wrapped up in all of this drama – and discover the true nature behind KK’s past and why he’s so determined to track down those responsible for this attack.

Ghostwire’s central narrative isn’t especially strong. It has the foundations to tell a personal story, but so much of its character development feels rushed or poorly implemented. Akito’s backstory is criminally slight, with only a handful of flashbacks helping us sympathise with his situation and nothing else. He’s a spectre for us to inhabit, while KK and his group of vigilante investigators aren’t much better. I wanted to care, but far too often I’d be thrown from one story revelation to the next where I was expected to be shocked or wowed by certain plot twists that ultimately meant nothing. He was a random corpse on the road who KK decided to possess, but somehow he is also central to the machinations behind Tokyo’s downfall? Even for a game as far-fetched as this one it feels poorly thought out. Tokyo is the game’s strongest character. Tango Gameworks has created a vision of the capital that is phenomenally lifelike. You will walk across tight alleyways populated by local businesses and vending machines before emerging onto a crossing dominated by the shadows of foreboding skyscrapers dotted throughout the twilight landscape. Each street is a visual marvel, brought to life by a permanent rainfall and ray-traced reflections that ensure each and every source of light bounces off one another to create a colourful radiance that never grows tiresome. Ghostwire: Tokyo is hauntingly beautiful, constantly drawing me away from the action to take screenshots or linger on details across convenience stores or to stare out across the horizon, curious that a city so loud had now fallen silent.

Exploring Tokyo is also a delight. While I wouldn’t describe this open world as sprawling, it is densely packed and filled with optional activities that pulled me away from the main quest. The city begins shrouded in mist, an impossible obstacle filled with unspeakable horrors that prevent Akito from pushing forward. To eliminate this blight you must purify Torii Gates, which are essentially Ghostwire’s version of a Horizon Tallneck or Ubisoft Tower. Doing so will clear the surrounding environment and unveil a number of optional quests and collectibles, furthering the breadcrumb trail of progression I was all too happy to follow. 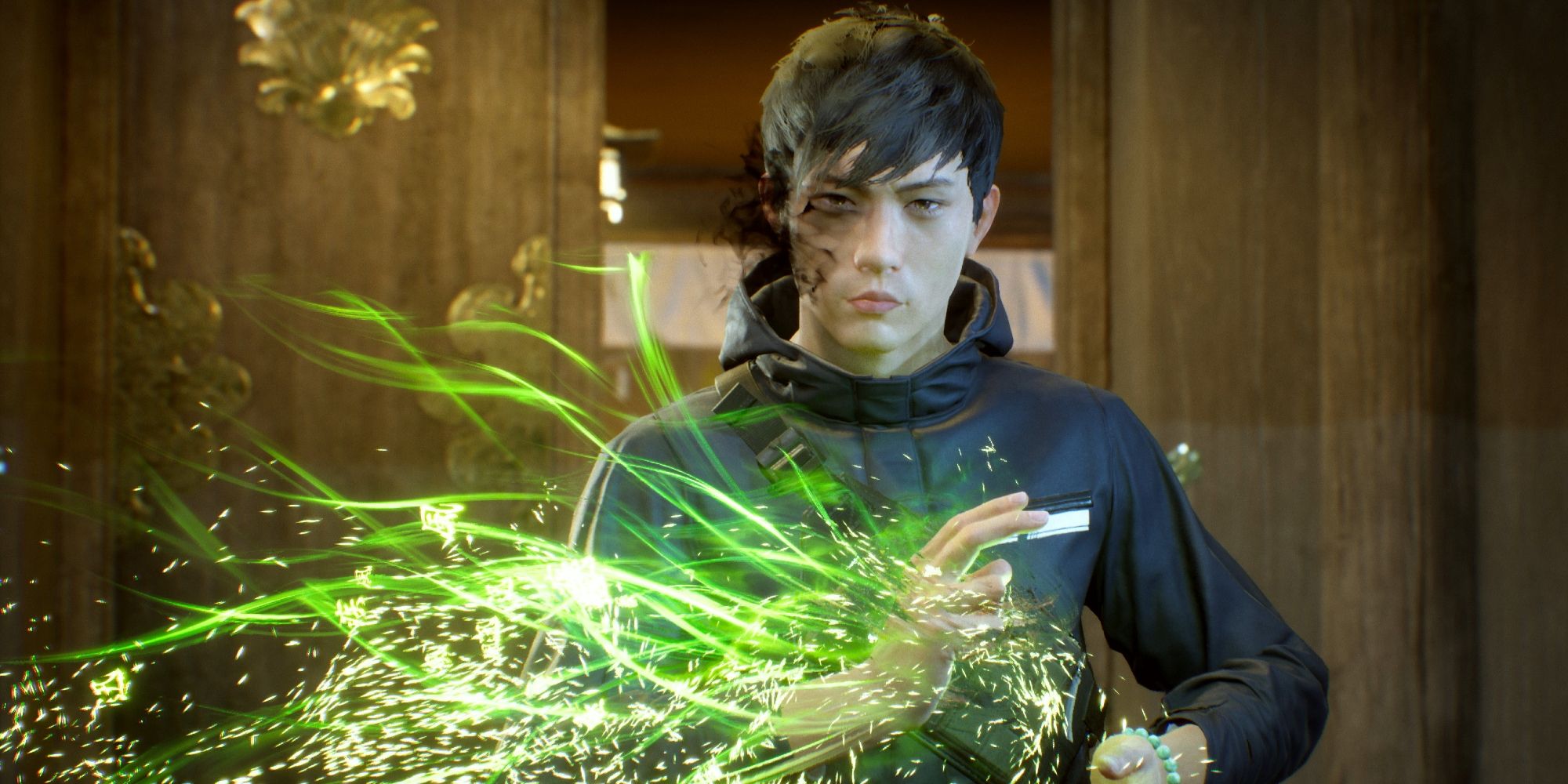 Side activities normally involve helping a spirit move onto the afterlife, conversing with their remaining energy about doubts or insecurities keeping them shackled to the mortal realm. Certain stories are knowingly silly, such as a man stuck in a public bathroom without toilet paper, while others are more poignant. One quest had me reuniting a late mother with her daughter, helping them share one last moment together before it all faded to black. Moments like this are peppered through Ghostwire: Tokyo and are well worth uncovering, since they offer the emotional payoff I was desperate to see from the main story but it never offered up.

Exploration is only one part of the paranormal pie however, since much of your time will be spent duking it out with supernatural baddies using a selection of elemental powers. Ghostwire: Tokyo is a shooter without any guns in sight, with Akito instead twisting his fingers into a selection of different Jutsu-esque poses to throw forth wind, fire, water, and pure spiritual energy to dispatch those who stand in his way. It feels incredible, each attack imbued with a sharp weight that tears through enemies like paper. When enough damage is dealt, you can pull an opponent’s core directly from their body, turning them into little more than ethereal pellets of energy as they float upward into the ether. It never gets old. A comprehensive upgrade system also makes it feel like Akito is growing stronger, showing tangible progress as he abandons the meek millennial attitude we saw in the opening hours. Becoming a faster and more capable warrior as the city itself expands to match your repertoire is incredible. So it’s a shame that the main questline and side activities often feel at odds with one another. I would spend hours uncovering secrets and completing optional missions only to remember that Akito also has a job he’s been kept alive to do, but it never feels urgent or even important. I can just ignore it until I’m ready, and this lack of immediacy also made the world gradually less interesting to explore as the moon-lit sky surrendered to a crimson sunrise as the final hour approached. I got to a point where I sighed and said to myself: “Well, guess I should actually do the story missions.”

This outlook is a problem, and it’s a shame all of Ghostwire’s disparate elements don’t always come together. But when they do it’s marvellous. Finding yourself in abandoned apartments that begin to bend reality before your very eyes is visual perfection, imbued with a larger than life approach to level design that stands out against the realistic streets awaiting outside. I lost count of how many times I stumbled into new locales only to have my jaw hit the floor, unable to comprehend the familiar scenery now blending seamlessly with the occult, turning an environment that once felt safe into something unknowingly hostile. It isn’t scary, it’s unsettling in a way that festers beneath your skin and refuses to subside. The flaws I mentioned fade into nothing when these instances hit hard, because there’s nothing out there quite like them. Psychological thrills that blend our modern world with occult monsters and local legends from across history, melding them into a singular whole that blew my mind time and time again. The Evil Within and its sequel had similar sequences that made every step we took a doubtful foray into the unknown, but here it feels infinitely more stylish, like Tango Gameworks’ is able to leave behind its survival horror legacy and craft something entirely new. Combat, exploration, stealth, and sequences like this combine to create one of the most distinct shooters in recent memory.

Ghostwire: Tokyo is a shooter unlike anything I’ve ever played before. Its depiction of Japan is frighteningly lifelike in its execution, begging for us to explore its abandoned streets and dimly lit alleyways in search of wayward spirits that all have stories to tell. Whether you’re bounding across rooftops or doing battle in construction sites, it is constantly surprising in ways that few games in recent memory have managed to. It is fresh, exciting, and a demonstration of what a major studio is capable of when they’re given the freedom to tackle a new universe without compromise. It isn’t perfect, but it’s so different, and that should be more than enough for people to take notice.

A review copy was provided by Bethesda for the purposes of this review.