The first Zombies DLC is here free for Call of Duty: Black Ops Cold War. Firebase Z takes us to the luscious forests of Vietnam juxtaposed with the unholy stench of the undead as they swarm a confined village with an unfortunate link to a cold, mechanical outpost not too far away. The zombies in the facility are, as to be expected, donning Omega uniform, but when you’re knee-deep in guts and gore, gunning down the risen in their homes? No, they’re just everyday, ordinary Vietnamese, or horrifically burned which is… unsettling. It’s a little different from the Nazis we were slaughtering only a day prior in Die Maschine.

There’s a sense of beauty layered into the otherwise harrowing atmosphere of the ruined village, with the alluring architecture of the brick-laid buildings and the sublime mountainscape encompassing the sprawling town. It feels Vietnamese to a T, and it feels like a leap up from the days of old where the distant  landscapes were shrouded in fog or made up of haphazard skyboxes put together with limitations of hardware pulling them down.

So, it’s a treat to look at – stare too long, however, and the zombies will be nibbling at your heels – but how does it play? Quick Revive is, as it used to be, available right off the bat, but there’s a certain level of anxiety from the get-go that’s unusual for Zombies. If an item looks too good to be true, it might not be your luck that’s spawned it, but rather a Mimic – those Margwa-looking monstrosities. Some drops are, rather frighteningly, potential boss fights, and that certainly makes looting an anxious affair. 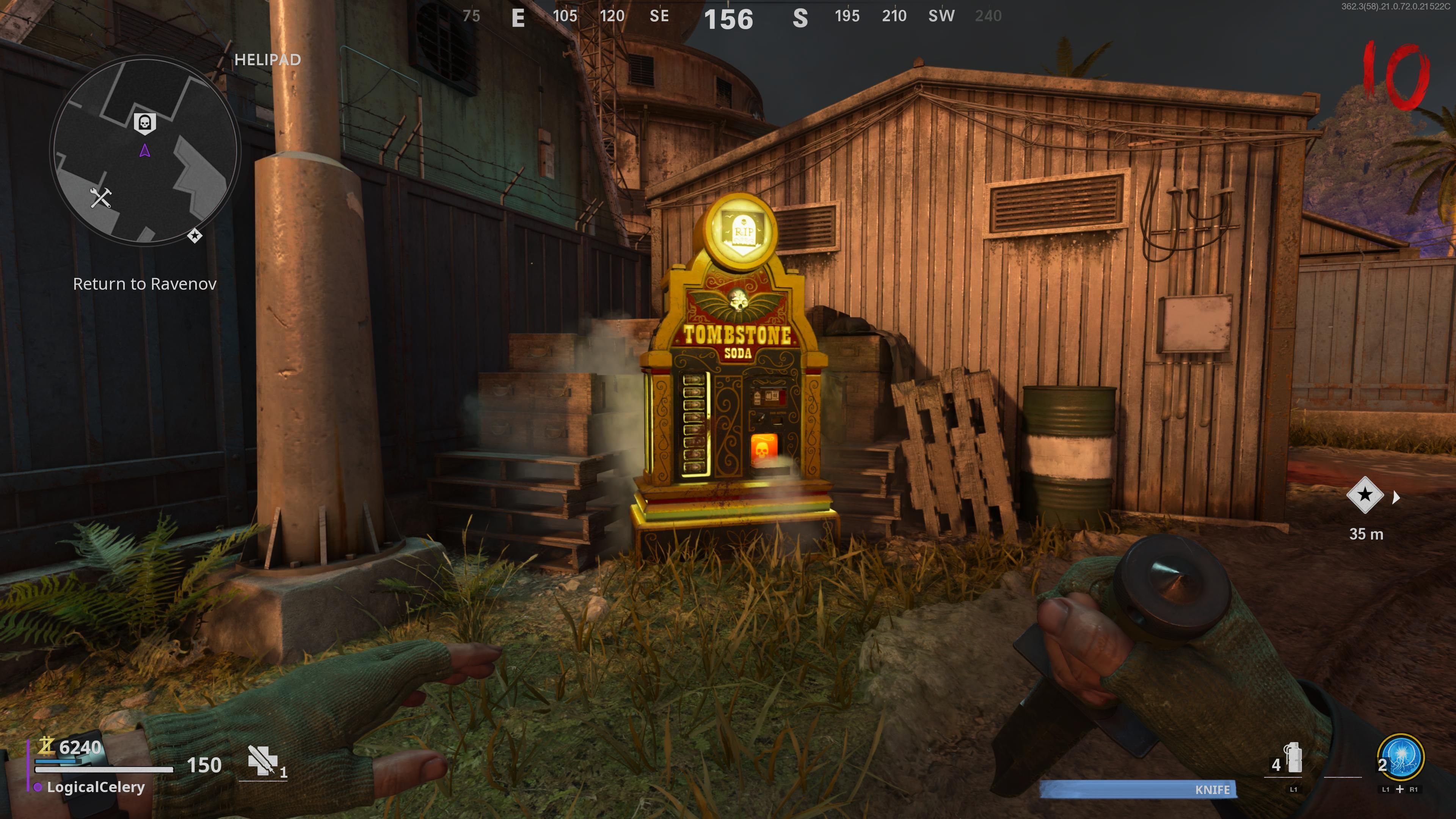 One door and a teleporter away and you have the sparkly new perk right in the cusp of your hands. Tombstone’s redesign is a treasure, with golden rims, an emphasized bird of prey, and a retro jukebox feel that screams 80s. That’s not counting the fantastic revamped jingle that gives Deadshot’s overhaul a run for its money. As for how its plays – it’s simple. You go down and you become a powerful ghost that can gun down the undead and revive yourself like you would a teammate.

For solo players, Tombstone is a nice way to save your self revive kit early on, so you don’t have to run around like a headless chicken fighting off the horde to revive yourself late rounds. It’s not useless like it was in Black Ops 2, and the upgrades only make it all the more of a must-grab. Hopefully, Treyarch can bring that level of revamping to other less-than-desirable perks of old.

As for the out of teleporter space, it’s a circle created around a crashed helicopter. The locations within the maps of Die Maschine and Firebase Z seem to be crafted around training and I for one cannot get enough of that design philosophy, as it makes for fantastic late-round run and gunning as opposed to the cramped corridors of Verruckt or the tight-squeeze of most of Tranzit. Being able to grab a horde of zombies and keep them on your trail – training them – only to turn around and wipe them out is the best part of Call of Duty Zombies. With maps designed around that aspect? It’s even more fun.

Once you arrive, there are three objectives – three Aether Reactors. These work a touch like those found in Origins or Revelations in that they power local areas. However, after you power all of them in Firebase Z, the entire map gets power, unlocking Pack-a-Punch and more. You pay 500 points, but unlike those other maps, two more objectives unlock, and you must kill zombies in the vicinity to power those objectives but zombies will work to damage them as you do so. It feels a little over-the-top whereas the beauty was in the simplicity for maps such as Origins, as the difficulty from having to defend numerous points isn’t too grave, as zombies don’t do that much damage to them. Still, it’s a nice change of pace from the lever pulling of Die Maschine, as variety is also a beaut.

Jump pads on top of that are a fantastic addition. With power on at various stations, you can link these pads and leap from area to area which can be a wondrous clutch when the zombie horde gets a little too close and crams you into a corner. They don’t seem to kill you as the posters showed much like the teleporter which is utterly simple in execution – no points to use, no turning it on, no grabbing items to go through, just use it.

Every so often, points will get attacked – points that you can reach pretty quickly with the jump pads – and it’ll be up to you to stand and hold the line, not unlike the games that inspired Zombies. These stand-offs are a fun addition that breaks the monotony of running around in circles, slaying the undead, as it pushes you to go to areas you might have otherwise avoided in such high rounds, and the incentive is the neat little power drop rewards of max ammo and carpenter (max armor). They start out with the score streak stations – where you can buy score streaks with points – but if the zombies push on and do in fact destroy those points, doling out enough damage, then they’ll swiftly move onto the Aether Reactors, and you likely want to keep the power on, so you’ll be pushed to defend them. This appears to be the replacement for dog rounds. 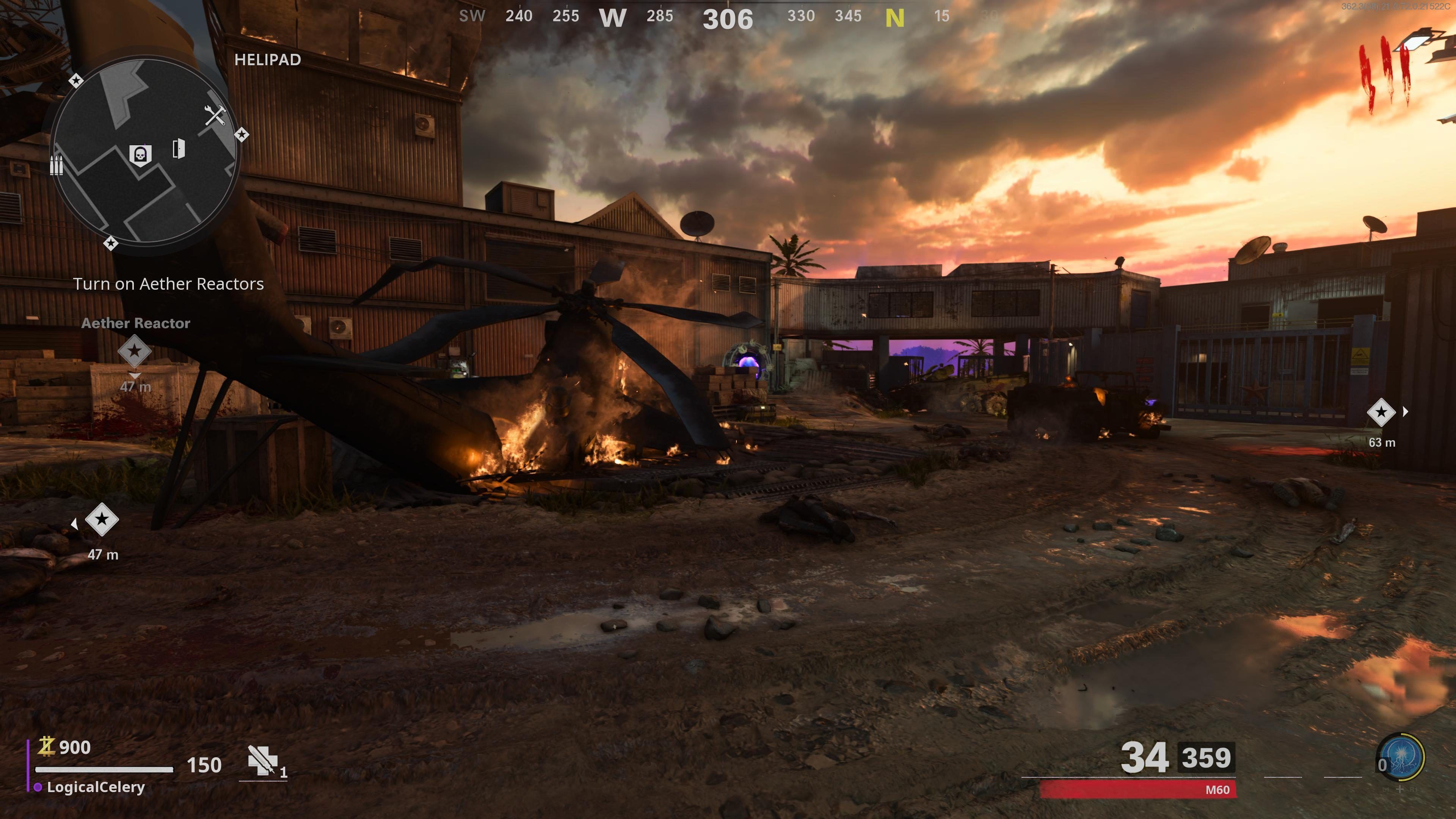 With all three activated, the pack-a-punch is readily available right at the start in the opening village next to Ravenov – it’s simple, but sometimes a map benefits from simplicity, and Firebase Z is a prime example. Right by it? The Wunderfizz which, admittedly, does feel a little too easy to get a hold of. Rather than having to run the gauntlet of the map for every perk, you could simply train by this machine to get points for those you need, whereas Die Maschine balanced it by having it unlock late rounds or in the Dark Aether.

However, something that is improved from Die Maschine is the location of the trials. Rather than sticking the trials machine in a dark corridor that, when you run into, traps you from all sides, with zombies spawning out of two barricaded entry points on the one end and through three doorways on the other, it’s right outside the teleporter in the open by a key training spot. It’s much more intuitive to use and airs more on fair than it does cruel rather than becoming a little too easy to access like the Wunderfizz.

The RAI K-84… now this was a fun weapon to get for this first impressions piece. The box left and moved a good ten times, but when I finally got it, phew – it’s worth the struggle. Given the name, which is essentially the Ray-K, it plays a lot like a Ray Gun meets AK. Fitting. Enemies disintegrate when the bullet hits their exposed nightmarish flesh, and it holds a nicely balanced 30 bullets per mag, so you can really fire off at a crowd and tear them apart. Pack-a-punched, it’s even more fun with the added power. It’s, in essence, the Ray Gun Mark II in a similar way to the D.I.E. being a slightly more fun Thundergun. What’s more? It shreds those pesky Mimics. 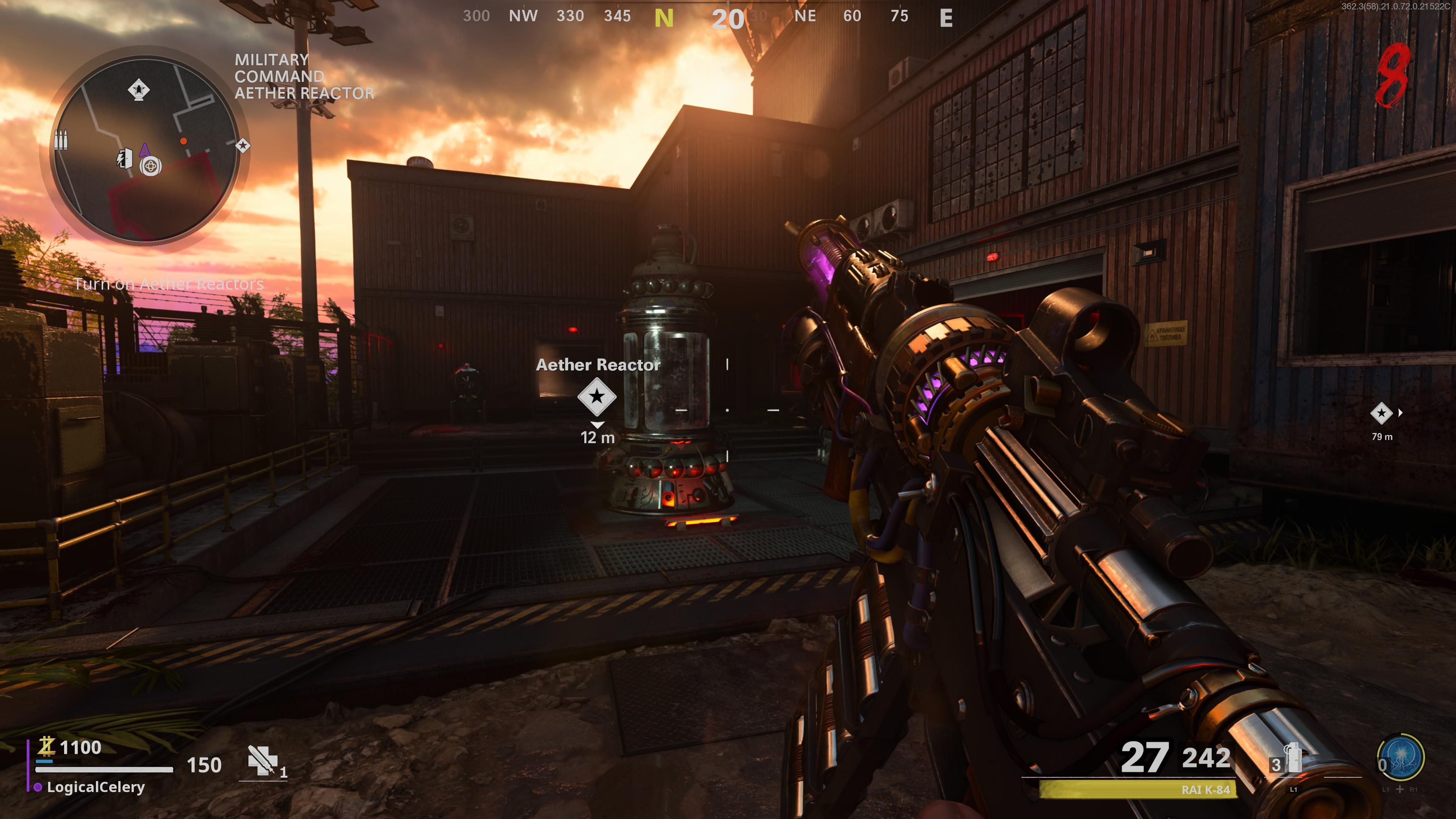 Unfortunately, the Easter Egg doesn’t launch until tomorrow, so there’s not much to say on that front, but given Ravenov – who feels like Dempsey meets Nikolai – and the Omega scientist hiding, being an all-around prick from the comfort of the comms pop-up, then it’ll likely be a hoot, especially with Samantha Maxis centre-fold, playing the damsel in distress. Hopefully, she’s more than just a Princess Peach, though. For now, we have the Mimics and Manglers – those Panzer-like foes that aren’t too tough to take down and are a helluva lot fairer than the Megatons but spawn a lot more often. But come the easter egg? We’ll be facing off against a giant Lovecraftian laser-beam spouting nightmare.

Firebase Z brings Call of Duty: Black Ops Cold War Zombies to its roots, especially in the number of wonderfully open spaces to train zombies. It feels like a map that could have been made in the original Black Ops 1 and 2, albeit with all the modern shine and polish of Cold War. It improves on Die Maschine in nearly every aspect, acting the same way that Ascension did to Kino Der Toten, or Die Rise to Tranzit, and what’s better, it’s all-new. It’s not an old map, it’s a fresh idea, and proves that Zombies isn’t dead, and it won’t be any time soon.

Next: Save The Queen Questline And New Battle Content Arrive In Final Fantasy XIV Online Patch 5.45 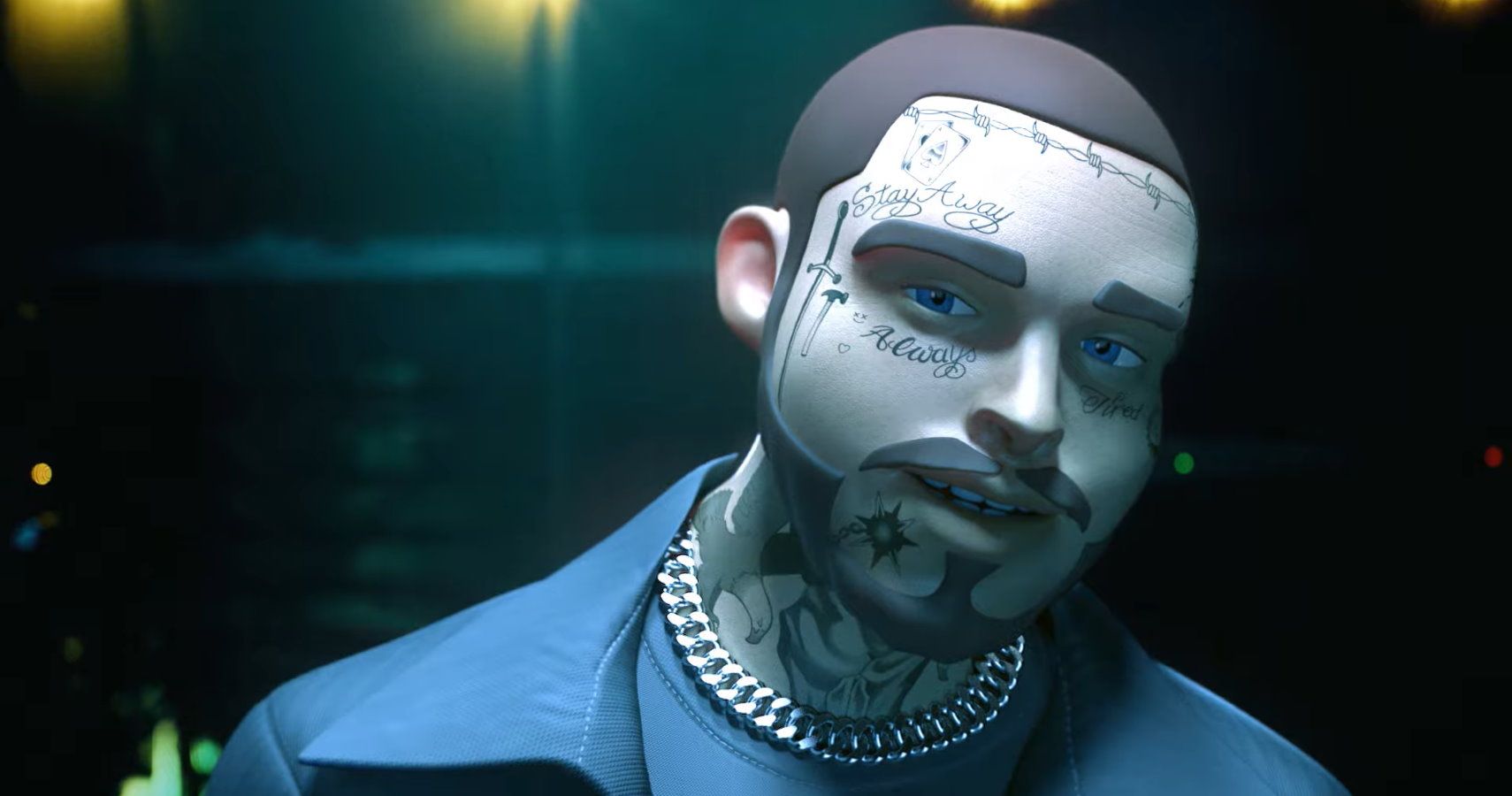