In April 2019, a fire started in Paris’ Notre-Dame cathedral. It engulfed the spire and the wooden roof, weakened the stone vault, and endangered the western towers’ massive bells.

The damage to the cathedral was and remains extensive, but French President Emmanuel Macron immediately swore that it would be rebuilt.

Following the fire, I saw more than a few articles pop up suggesting that the much-maligned 2014 video game Assassin’s Creed Unity could provide a way forward. Didn’t Ubisoft have some incredibly detailed 3D models of the cathedral lying around? Couldn’t architects, historians, and artisans make use of these boons?

Ubisoft made a donation of €500,000 to the restoration effort and made Unity free on PC for a week. But the company never said it was handing over its plans or models. When asked by The Guardian, a Ubisoft spokesperson said that the company wasn’t involved in the reconstruction, but said, “We would be more than happy to lend our expertise in any way that we can to help with these efforts.”

So basically, “Sure, if they ask us.” Experts also quashed the rumor — in French and in English.

Still, the fantasy has persisted. There’s a beautiful narrative to it! Assassin’s Creed Unity was derided when it came out for its bugs, its poor optimization, its microtransactions, its companion app, its controversy over a lack of women character models in co-op. Unity’s poor reception was blamed for weak sales of Assassin’s Creed Syndicate the following year. Wouldn’t it be poetic, then, for the game to bring something beautiful into this world, and help restore Notre-Dame?

Why it wouldn’t work

Caroline Miousse was a senior level artist on Unity at developer Ubisoft Montreal, and she spent two years working on the game’s rendition of Notre-Dame. In interviews on Ubisoft’s blog and with Destructoid, she discussed the ways in which the team tweaked the cathedral to give the player greater mobility.

“We added things like cables and incense across the second level of Notre Dame so players would be able to move around easier when they’re above the ground,” Miousse told UbiBlog. There are also windows that swing open on the upper levels of the cathedral. Gilt panels on the balustrades of the tribune and along the nave guide the player’s movements.

Mobility is key in Assassin’s Creed, so Unity’s departures from real life didn’t stop at Notre-Dame. In an interview with The Verge, art director Mohamed Gambouz explained that the developers needed to smooth out the pointy medieval rooftops of 18th-century Paris so as not to break the player’s parkour flow.

Game designers also have to work with technical restrictions. For example, each tympanum above Notre-Dame’s main doors is full of intricate sculptures depicting biblical scenes. Rather than being rendered with all these sculptures as 3D objects, the tympana in Unity are flat. The designers elected to create gorgeous textures that give them the appearance of being sculpted. It’s an optimization technique that looks great and doesn’t compromise immersion — unless you get really close and swing the camera around to break the illusion. (But only a jerk capturing footage for some kind of YouTube video would do a thing like that.)

The Eiffel Tower is the best example of how French monuments can get bound up in copyright. The tower itself is well out of copyright — it was completed in 1889. But the lights that play across it at night were installed in 1989. They’re still under copyright, so the visual of the illuminated Eiffel Tower can’t be used in commercial works without a license.

Notre-Dame is in a similar situation. It’s owned by the French state, not by the Catholic Church, and it’s a designated historic monument, to boot, one that’s continually being restored. Much of the cathedral is under a patchwork of copyright restrictions.

In the UbiBlog interview, Miousse singled out Notre-Dame’s great organ: “It’s just so huge and beautiful… and copyrighted. We couldn’t reproduce it exactly, but we could still try to nail the feeling you get when you see it.”

The rose windows are similarly affected by copyright — although I surmise that technical limitations also led the designers here. The art in Unity’s rose windows is different from that of the real Notre-Dame, and the images are reused throughout the windows’ panes. Again, this makes sense: The look and feel of the stained glass is preserved, and you’re only going to notice the art is different if you’re actively looking for it. 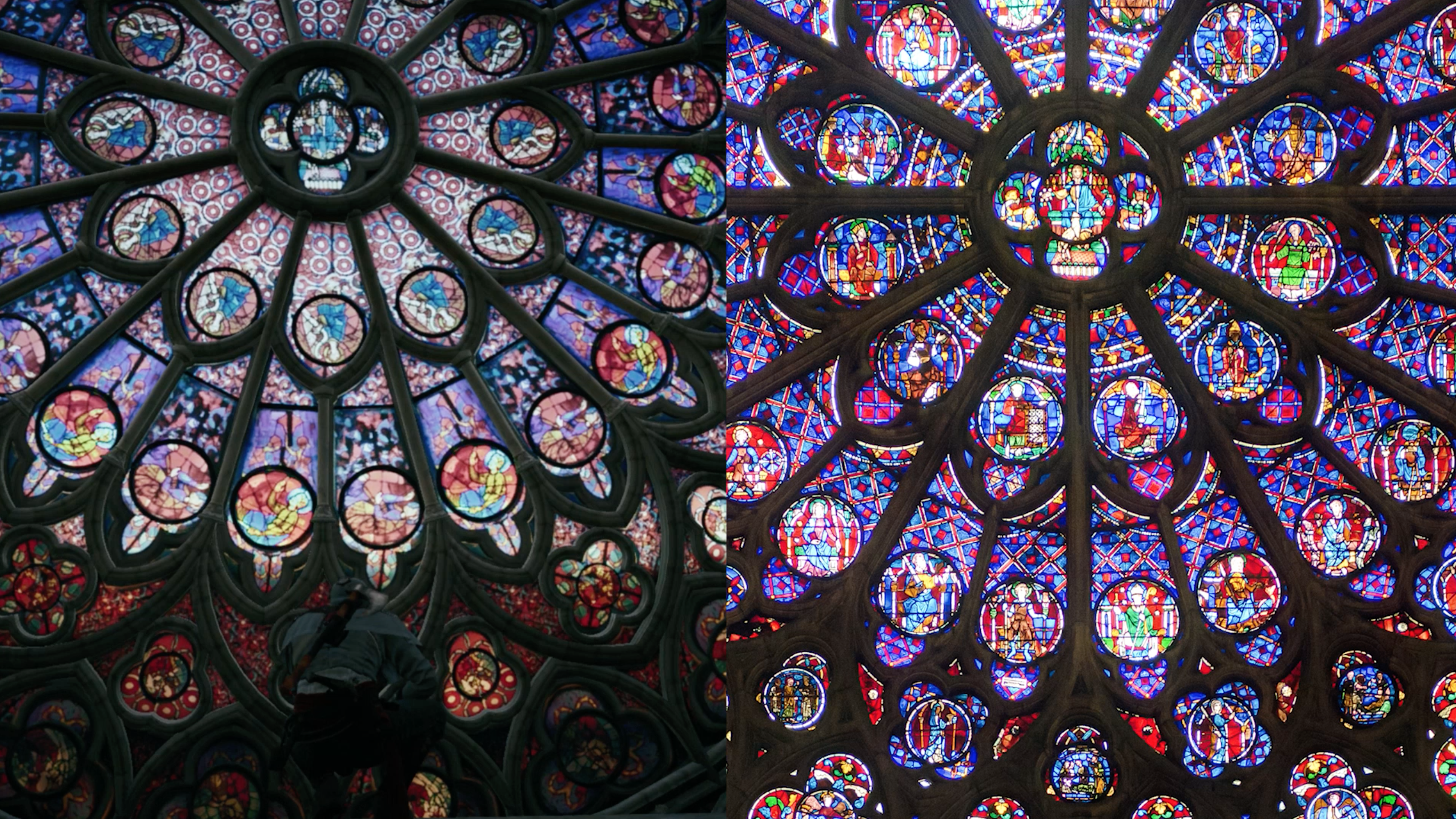 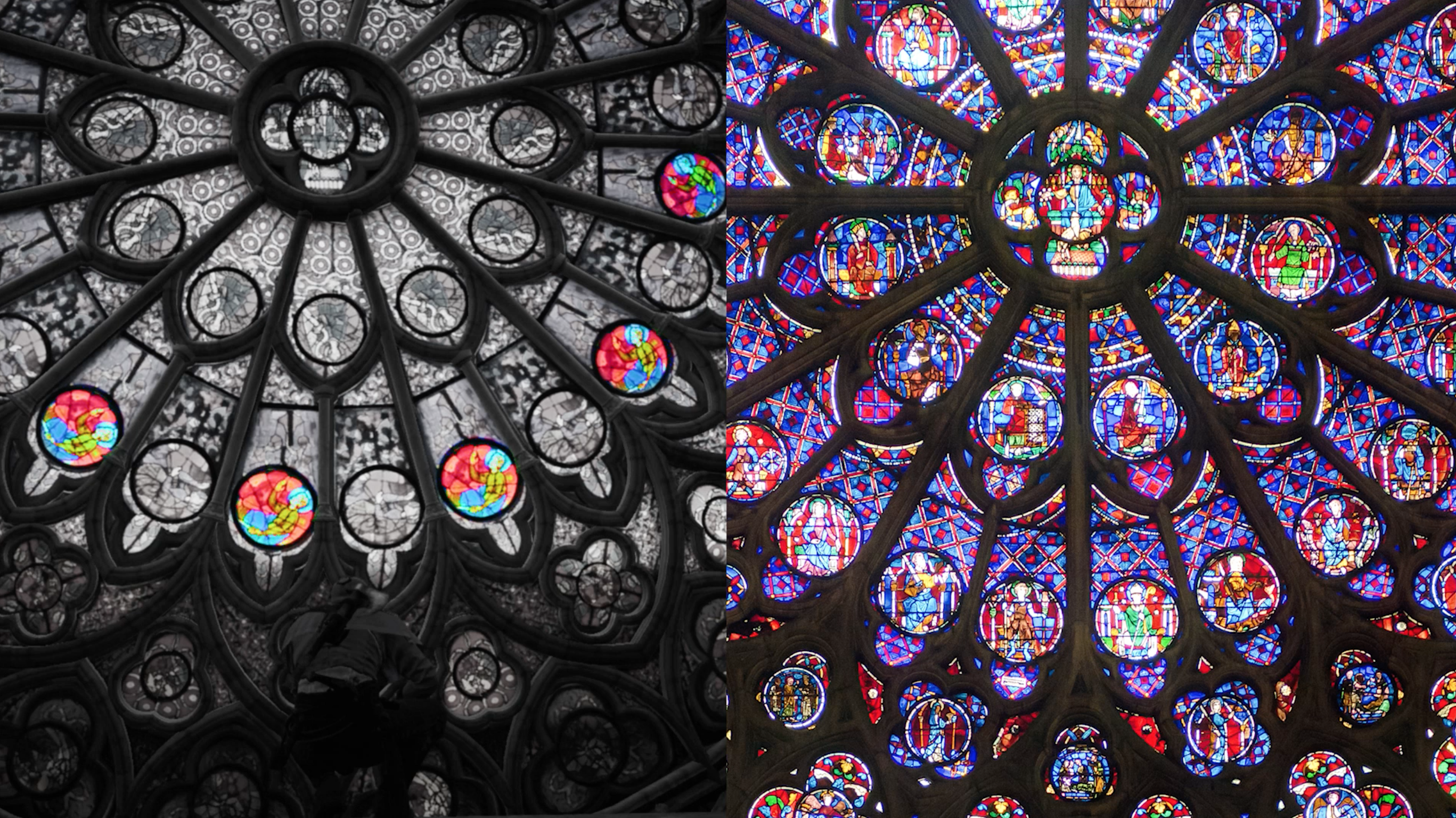 For Miousse, the copyright restrictions were a chance to get creative. “It gave me the opportunity to create something new from a starting point that people know and understand. It was a very interesting challenge and I had a lot of fun with it,” she told UbiBlog.

Between the copyright issues and the alterations made for technical and gameplay considerations, it’s pretty clear that the Notre-Dame that was modeled for Unity isn’t accurate enough to help real-life researchers restoring the damaged cathedral.

Those changes made the cathedral better for the game, but even if they hadn’t been made, it’s still super unlikely that Ubisoft’s work would be relevant here. As Cédric Gachaud told Le Monde, “[The game’s designers are] looking for a coherent visual … we’re looking for millimetric precision.” His company, Life3D, was working on 3D models of Notre-Dame before the fire.

But aren’t there scans, or diagrams, or something behind those coherent visuals in Assassin’s Creed Unity? Ubisoft declined to comment for this story, but from the research I’ve done, it seems that the development team worked mainly off of photographs and old blueprints.

“You really have to take a bunch of pictures of everything and put them all together like a puzzle,” Miousse told UbiBlog. She said she used “tons of books” and spoke to Ubisoft’s resident art historian, Maxime Durand. At Destructoid, Brett Makedonski described her putting the cathedral together “brick by brick.”

The “millimetric” 3D models that do exist come from academia. One famous model of Notre-Dame was created by art historian Andrew Tallon. Tallon spent years laser-scanning the cathedral, gathering data and high-resolution images. And he wasn’t alone: Not long before before the cathedral caught fire, art historian Stephan Albrecht and his team had been scanning the transept, and making their own models.

Both Tallon’s and Albrecht’s data is being used in the reconstruction, and the cathedral is still being scanned and photographed to this very day.

All this work is required because no model is perfect. Laser-scanned data still needs to be composited into a model, and that model needs to be opened by different researchers on different computers, all seeking different information.

And even with the most detailed, most perfect scans, the cathedral will still need expert woodworkers, stonemasons, and other artisans to physically restore it. The data is just the beginning.

Changes we see, changes we don’t

It would be a mistake to think of Notre-Dame as a static object, encased in amber.

The Notre-Dame that existed during the French Revolution would be unrecognizable to us today. The original gargoyles were removed around 1726. The nave’s stained glass was replaced with white glass — to better illuminate the interior — in the 1750s. In the 1770s, a huge chunk was taken out of the central tympanum on the western facade so that it would be easier to carry things in and out during processions, according to historian Jennifer Feltman, assistant professor of medieval art and architecture at the University of Alabama. And once the revolution got going properly, the cathedral was stripped of ornamentation, statues, and the like. The rows of biblical kings were torn down and beheaded, and weren’t found again until the 1970s.

None of this appears in Assassin’s Creed Unity, which is set during the revolution. True to history, though, in the game’s fiction, the cathedral is being used as a sort of storage facility after being seized from the Catholic Church.

There are other changes to Unity’s Notre-Dame, if you’re looking for them. The Red Door, a medieval entry on the northern facade, is missing. And the sacristy on the cathedral’s southern side is similarly gone. 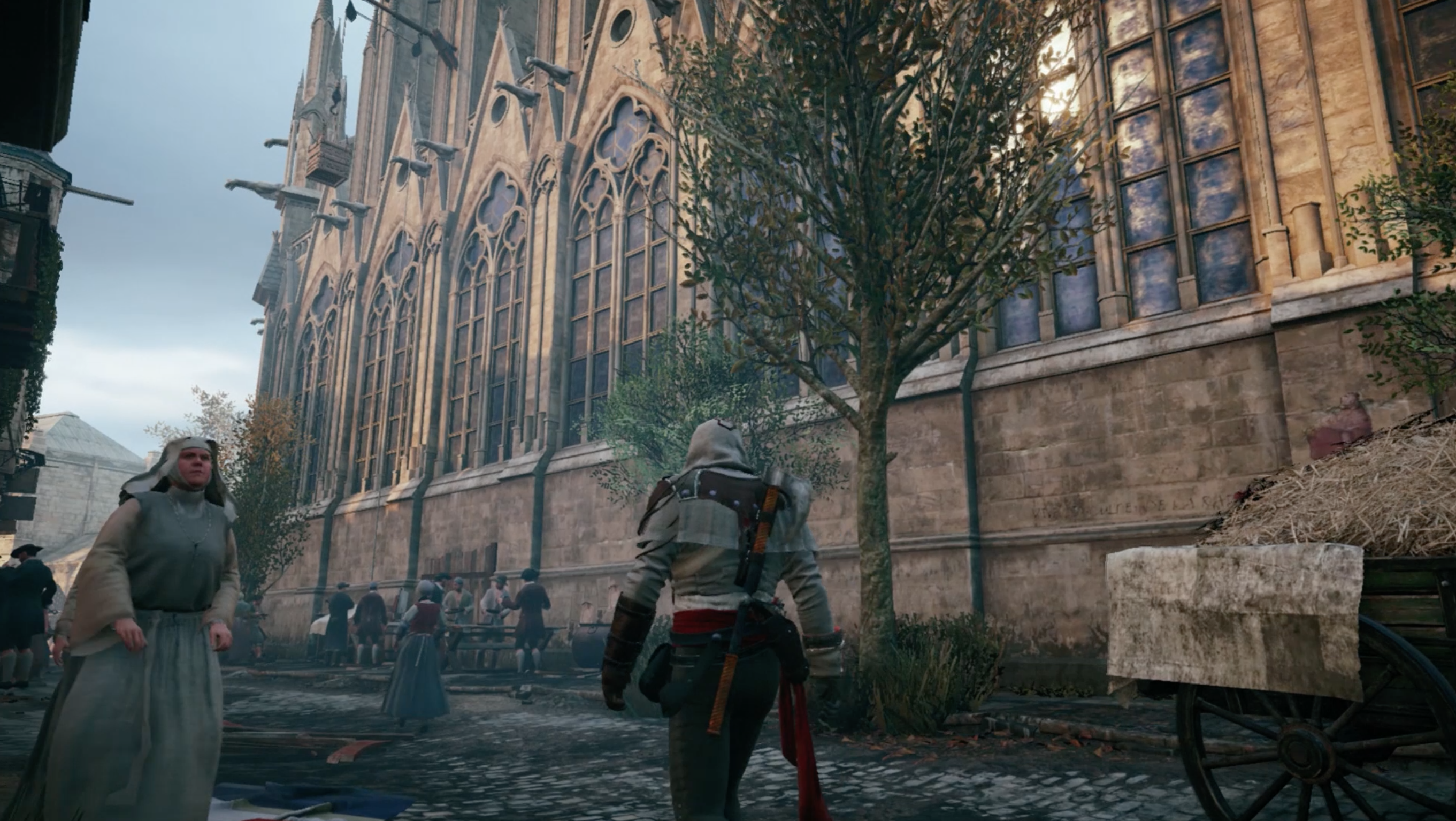 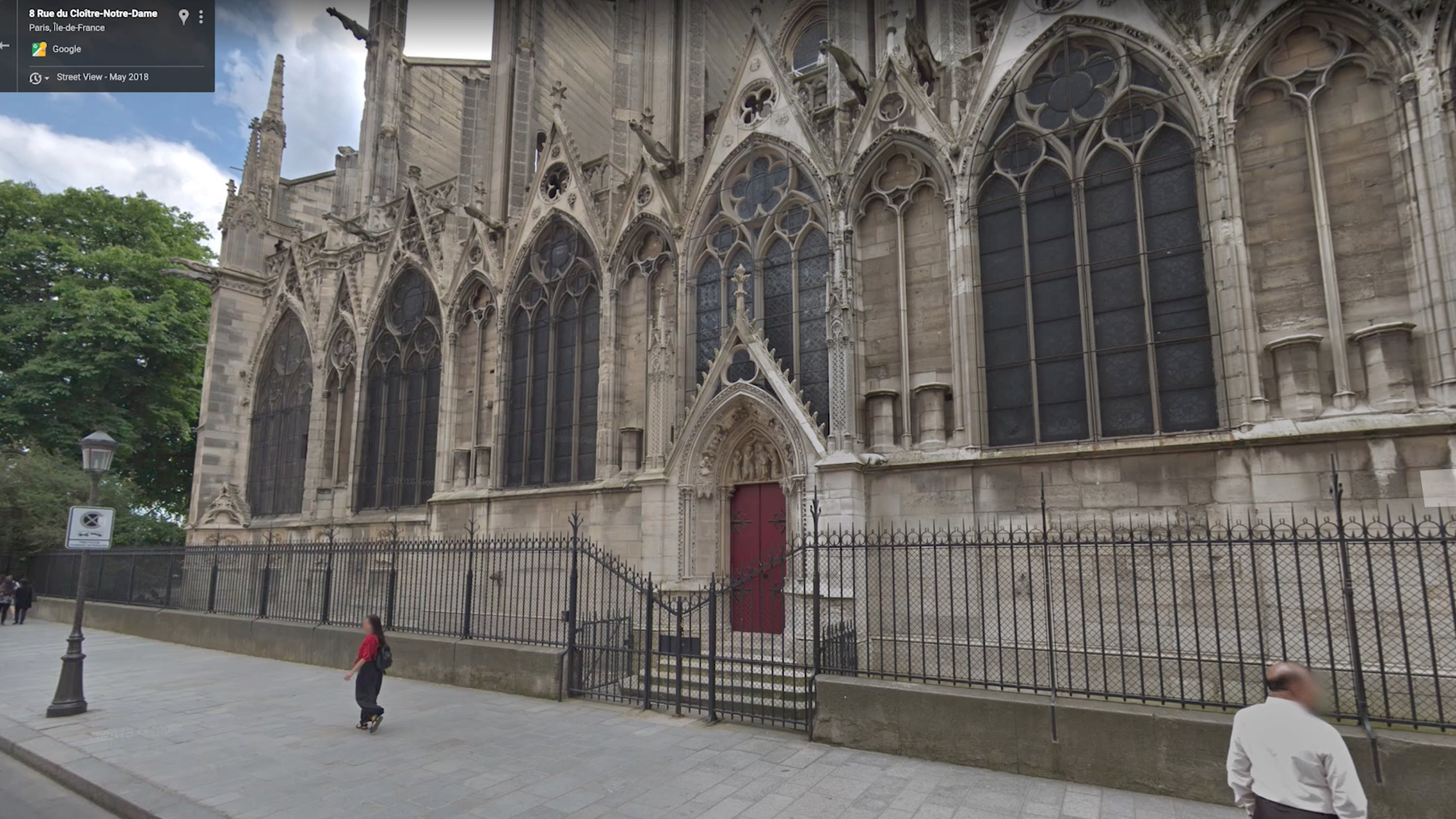 Miousse made another major, anachronistic change to the in-game Notre-Dame: She included the spire.

Notre-Dame’s original spire was built from wood, and by the time the revolution rolled around, it was decrepit. After numerous attempts to figure out what was going wrong, it was finally torn down in the 1790s — likely within the time frame when Unity takes place.

There would be no spire on Notre-Dame until architects Jean-Baptiste Lassus and Eugène Viollet-le-Duc undertook a restoration in the mid-19th century. Viollet-le-Duc is considered the father of the modern concept of building restoration. He wanted to preserve the cathedral’s medieval heritage, but to do that, he needed to modernize it. He added lead rain gutters and gargoyle rain spouts, essentially arguing, Hey, if they’d had this technology in 1200, they would’ve done it too.

Viollet-le-Duc’s new spire was 59 feet taller than the original, and made of wood coated in lead. Metal statues of apostles trailed from its base. This was the spire that burned in 2019, and it’s also the one that appears in Assassin’s Creed Unity — a game that is set some 70 years before the spire existed.

The spire of Notre-Dame, as seen in Assassin’s Creed Unity.
Image: Ubisoft Montreal/Ubisoft via Polygon

“The spire is one of the big, immediately noticeable changes,” Miousse told UbiBlog. “You see [Notre-Dame] and can recognize it immediately, and part of that is due to the massive spire.” Had the cathedral’s roof been historically accurate in Unity — i.e., spireless — players would have missed out on the experience of seeing and climbing a monument they recognize.

The real spire was at the heart of a bit of controversy after the fire. President Macron wondered if it might not be better to replace it with contemporary architecture, and launched a contest for a redesign. There were proposals for a glass spire, a roof garden, or a simple beam of light. As with most things, a lot of people got mad, and the French Senate passed a bill telling the restoration team to put the cathedral back like they found it.

And so, this medieval cathedral is being restored with the spire that everyone knows: the one from the 1800s.

Because the emotion of Notre-Dame is there. The game barely asks you to suspend disbelief — it feels true.

That emotional reality is what the team behind Unity was going for. “I can re-create every single little detail of Notre Dame, but I also want to talk to people who have been there so I can know what it’s supposed to feel like,” Miousse told UbiBlog. She added, “I needed to keep the feeling and the emotions, while making sure it was still recognizable.”

It’s a fascinating parlor trick — a litmus test for our own relationship with Paris, with the cathedral. The Red Door and the sacristy might not factor into the Notre-Dame of our imagination, but the spire does.

When I was capturing footage of Unity for this video, I marveled at the way the stained glass bounces splotches of colorful light onto the walls and onto my character. The texture of the marble is beautiful. The developers took care to make sure the skyline that you can make out through the stained glass windows matches the one you’ll see when you step outside the cathedral.

Unity’s Notre-Dame doesn’t need to be a one-to-one re-creation of the real thing. That’s a totally unnecessary burden to put on a video game. We have scientists, academics, and researchers for that.

But there’s real value in the way this virtual Notre-Dame makes us feel. It sparks curiosity, familiarity, and wonder. It does what it needs to do.