NPCs in Assassin's Creed games are usually just window dressing. They're people-shaped decorations designed to make these historical settings—whether it's the cobbled streets of Victorian London or the narrow waterways of Renaissance Venice—feel alive. Some wander the streets aimlessly, while others can be seen going about their daily lives, baking bread, lounging in parks, or praying to their gods. They don't have as much individual personality as, say, Grand Theft Auto's quirky, chatty pedestrians, but the illusion is effective enough. Cities feel appropriately bustling, and people will react to you realistically.

Start a fight and they'll flee in terror. Climb a building and they'll wonder out loud what you're doing. Basic stuff, but enough to make these settings feel dynamic and alive, rather than just static movie sets. However, the one thing NPCs can't do is affect your life in any meaningful way. They can shout and scream and curse all they want, but you never actually have to worry about them. Unless you're playing Assassin's Creed Odyssey, that is. The citizens of Classical Greece are an altogether different breed of NPC. They're brave, aggressive, and fearless to a ridiculous degree, often taking the law into their own hands.

I first realised this when I saw a sparkling treasure chest in a temple. Being in a public place, rather than an enemy fort or bandit camp, interacting with it counted as stealing. I looked around for guards or anyone else who might have objected to me helping myself, but the only other person in the temple was a priestess praying to a statue of Apollo. So I stole from the chest, expecting no retribution, only to find myself on the receiving end of a flurry of punches. The priestess was so incensed by my brazen theft (rightfully so, honestly) that she disregarded the fact I was heavily armed and decided I needed a savage beatdown. 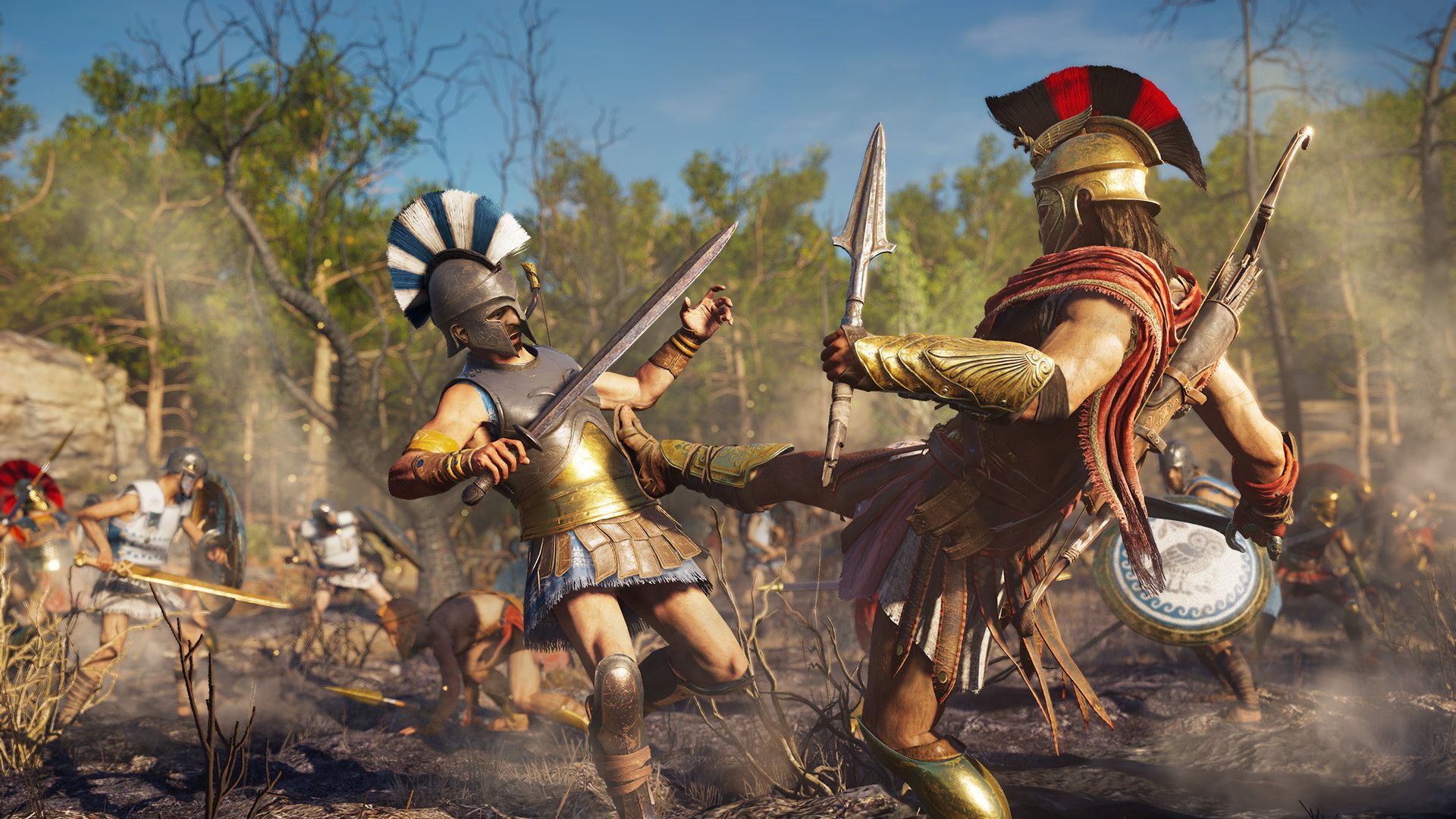 This is why I love the NPCs in Assassin's Creed Odyssey. No longer are they just there to make the world look busy—they're passionate little defenders of justice, turning on you if they see you fighting a soldier, killing someone, thieving a horse, or otherwise playing fast and loose with the law. They can even grab makeshift weapons if there are any lying nearby, which I discovered the hard way when some old guy in a toga picked up a broom and gave me a solid thrashing with it. It's preposterous, but it's brilliant. This is exactly the kind of absurd, systems-driven nonsense I love to see in an open world game.

Brilliantly, this can even work in your favour—usually by accident. Say you're fighting a group of bandits in a crowded area, and an enemy hits a passing civilian while he's taking a swing at you. The NPC they hit will sometimes grab a weapon and turn on their attacker, becoming a temporary ally in the battle. It doesn't make sense for these lowly farmers, merchants, and other regular citizens suddenly taking up arms and fighting huge, armoured, terrifying-looking mercenaries and bandits, but it's fun, and that's all that really matters. You can create some wonderful chaos by picking fights in busy urban sprawls like Athens and Korinth.

I don't think Assassin's Creed Odyssey gets enough credit for these simulation elements. I mean, it's hardly Deus Ex, but you can still have a lot of fun messing with the AI and taking advantage of its quirks. I once accidentally cleared out an entire pirate camp by using my upgraded Spartan Kick to boot a bear that was attacking me away. The dazed beast rolled off a cliff, where the camp happened to be, and I watched with delight as it woke up and killed the pirates for me. You can also make fast work of legendary animals by getting a bounty on your head, then luring any mercenaries pursuing you to their dens to fight them for you. 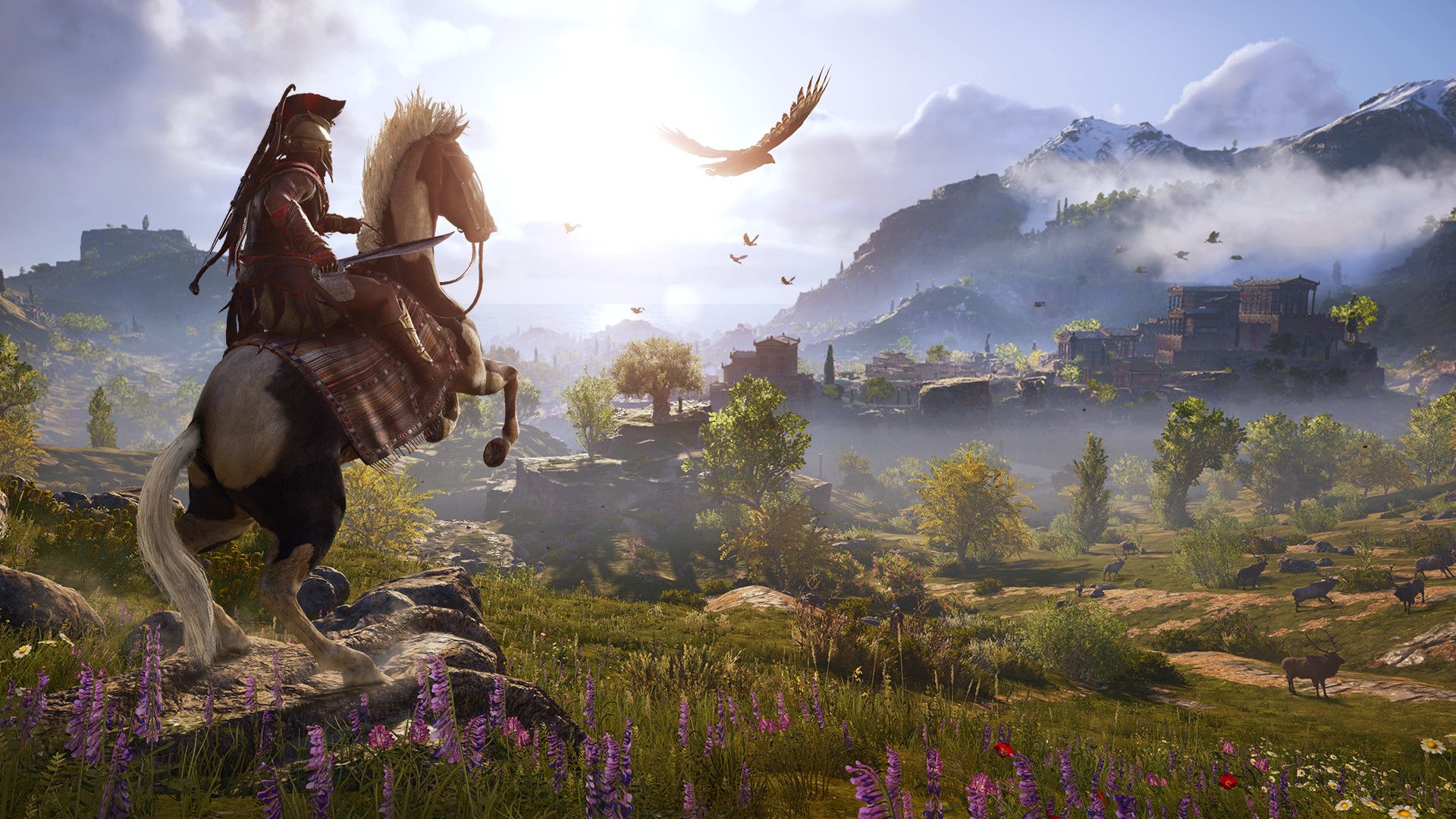 Admittedly, sometimes the game's fighty pedestrians can be annoying. Once, while infiltrating a villa in the heart of Athens, a civilian wandering along a nearby street saw me stealth-killing a guard. Furious, he rushed in to beat me to a pulp, alerting the other guards in the villa and forcing me to finish the mission violently. But as frustrating as that was at the time, it was still a memorable moment. I don't mind if the simulation occasionally conspires against me, because that's the price you pay for inhabiting a systems-driven world. The rules have to apply to everyone, even if it means screwing up your carefully planned infiltration.

Odyssey's aggressive citizens are pretty divisive. Some people find them immersion-breaking and disruptive. Others, myself included, love the extra layer of unpredictable mayhem they bring to the world. The fact this system was removed entirely from the next game, Assassin's Creed Valhalla, suggests that Ubisoft perhaps didn't have much faith in it either. But for me, it's just one of many reasons that Odyssey is the best Assassin's Creed. It's also made me think twice about stealing from public places in the game, just in case a passing civilian happens to see me and decides to send me to Hades with a broom.