Britain’s maternity mortality scandal: New mums in UK are THREE times more likely to die than those in Norway… and out of eight prosperous European nations, only Slovakia has worse maternal death rates, study shows

Mothers in the UK are over three times more likely to die during pregnancy or within a year of giving birth than in Norway, a study reveals.

A comparison of eight high-income European countries found only Slovakia had worse rates of maternal deaths.

Analysis of more than two million UK births showed heart disease and suicide were the leading causes of death among new mothers, suggesting that rising obesity and mental health issues are to blame.

Yet in more than half of cases in Britain, doctors are failing to record links to maternity on death certificates, obscuring the full scale of the crisis, the researchers suggest.

Half of the UK deaths occurred in the 12 months following birth, pointing to shortcomings in postnatal care.

It follows a report last week that the number of women who died up to six weeks after having a baby has leapt by a quarter in five years.

Some 229 mothers died alongside 27 of their babies between 2018 and 2020, with many of the deaths ‘avoidable’. A further 289 women died between six weeks and a year later. 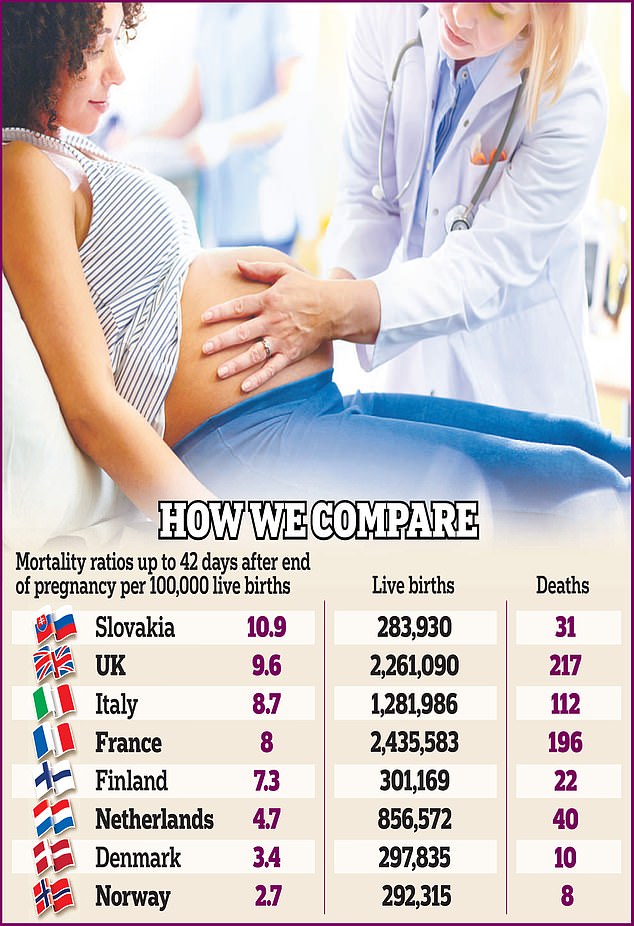 The latest findings come from an international team of researchers, including Oxford University academics, who examined data on millions of live births across Denmark, Finland, France, Italy, the Netherlands, Norway, Slovakia and the UK.

Only the UK and France held data on so-called late maternal deaths – those up to 12 months after giving birth.

Heart disease and suicide were the leading causes of death, with blood clots also ranking highly among UK mothers.

Youngest and oldest mothers were at particular risk, along with those born abroad or from ethnic minority backgrounds.

The findings, published in the BMJ, suggest rising obesity levels are taking their toll, with experts warning it has become one of the most commonly occurring risk factors in obstetric practice.

Some 21.3 per cent of the antenatal population are obese and just 47.3 per cent have a body mass index (BMI) within the normal range, according to the Royal College of Obstetricians and Gynaecologists.

Pregnant women who are obese are at greater risk of pregnancy-related complications compared with women of normal BMI, including pre-eclampsia and gestational diabetes.

Researchers said the high level of cardiovascular deaths – which can be linked to diabetes and high blood pressure – partly explained why risk was higher in older women.

They also called for more to be done to tackle mental health issues, with serious conditions including psychosis known to increase in pregnancy. 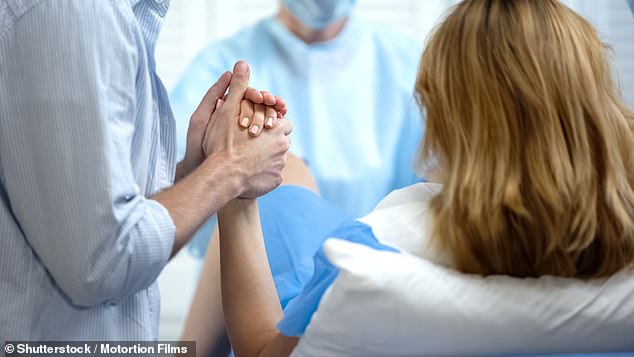 Half of the UK deaths occurred in the 12 months following birth, pointing to shortcomings in postnatal care (stock image)

Professor Andrew Shennan, of King’s College London, said it was vital deaths were properly monitored so they could shape policy.

He added: ‘All countries should have a dedicated surveillance system. [This] will allow strategies and policy makers to direct efforts appropriately.’

Sara Ledger, from childbirth charity Baby Lifeline, said: ‘This research is yet another reminder that there needs to be a focus on improving maternal health.

A Department of Health spokesman said: ‘We have already invested £127million into the maternity system to boost the workforce and improve care.

‘NHS England has published guidance to reduce disparities and improve maternity outcomes, supported by £6.8million of investment – alongside commissioning specialist networks run by midwives and experts so women can access care for chronic medical problems around pregnancy.’

Sally Ashton-May, director of midwifery policy and practice at the Royal College of Midwives, said: ‘It is deeply concerning that the number of maternal deaths in the UK is going in the wrong direction, and every number represents a family missing a partner, a mother, a daughter.

‘We already know how to address the issue – more midwives, better training for specialist support – what we need now is the Government commitment to make the change we so desperately need to see.

‘The RCM has been telling successive governments, in England, Wales, Scotland and Northern Ireland, what they need to do for years.

‘By their inaction, their lack of investment in maternity services, they are failing women and failing staff who are desperate to deliver the safest possible care and deeply frustrated that they cannot.

‘This must change and quickly to support women and to stop this tragic upward trend in preventable deaths.’