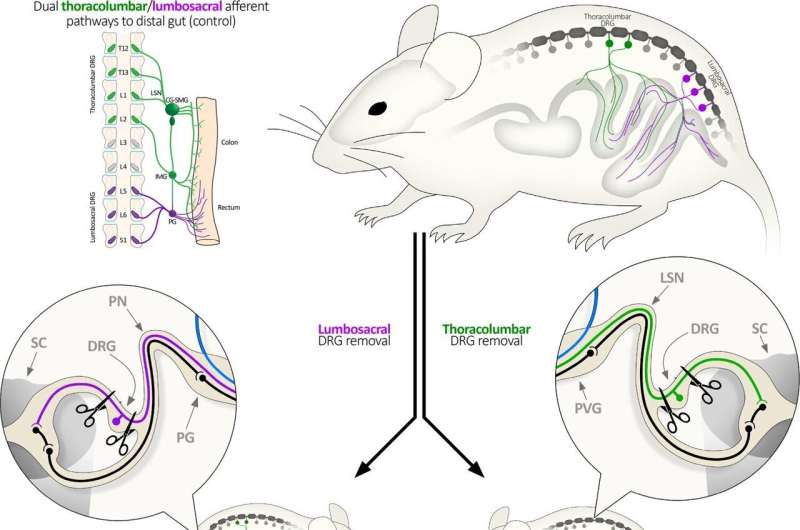 Surgically removing specific populations of sensory nerves that communicate between internal organs, such as the bladder and gut, and the brain, can silence pain responses, without impacting other functions in the body, new Flinders University research has found.

The authors say the process, tested in mice, could be used for long-term pain relief, eliminating the need for regular consumption of conventional and highly addictive opiate-derived pain medications that have a large number of side-effects.

“Many people experience chronic visceral pain but there are limited treatment options available as it is notoriously difficult to treat,” says study senior author Professor Nick Spencer, a Matthew Flinders Professor in the College of Medicine and Public Health.

“Unlike the pain that occurs when we strain a muscle or break a bone for example, visceral pain is related to our internal organs and occurs in response to many conditions, such as inflammation, irritable bowel syndrome, bladder cystitis, endometriosis or abdominal cancers.

“Generally, the main form of treatment is opiate pain medications including codeine and oxycodone, but these are highly addictive and cause a number of detrimental side effects on the body.”

Understanding how abdominal organs communicate via nerves with the brain is of major interest to medical science and recent research has begun to show this connection plays a key role in health and disease.

However, identifying which sensory nerve pathway, or pathways, communicate pain sensations from the gut to the brain has been limited by a lack of techniques to determine precisely which populations of sensory neurons detect pain from the gut wall.

Now, in a study published in Communications Biology, a Flinders University team has revealed a new microsurgical technique whereby specific populations of dorsal root ganglia (DRG) can be removed from mice without interfering with other sensory or motor nerves.

“As DRG transmit sensory signals from the peripheral to the central nervous system, using this microsurgical approach we were able to abolish pain responses from certain regions in the large intestine by removing specific populations of DRG,” says Professor Spencer.

“This led to the selective loss of distinct populations of sensory nerve endings within visceral organs, allowing for the long-term silencing of pain signals, while not interfering with other functions in the body, even months after the surgical procedure.”

The authors say the technique outlined provides a major pathway for scientific discovery and reveals details about the exact route pain signals are traveling in the body.

“Because of the similarity in sensory processing and pain signaling between different species, our next step will be to demonstrate the success of this approach in larger animals,” says Professor Spencer.

“While this technique has not yet been performed in humans, a similar approach is already used in humans with the intention of blocking pain signals from reaching the brain. This new study is another significant step in our understanding of how the gut and brain communicate and the important role this has across a number of medical conditions.”