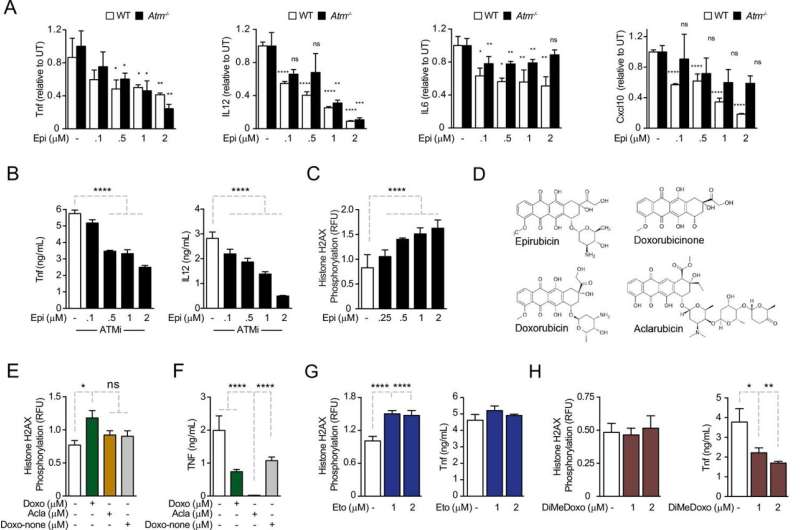 The body’s extreme response to infection, a condition called sepsis, kills 11 million people every year. This is because to survive a serious infection it is not enough to get rid of the infectious agent, which is currently done with relative effectiveness; it is also necessary to limit the damage these and the immune response cause to the organs. The Innate Immunity and Inflammation research group at the IGC focuses on this second aspect, which is still not a part of the therapeutic intervention on sepsis.

The solution could be a class of drugs commonly used to treat cancer: anthracyclines. In the past, the team demonstrated that these drugs prevent organ failure in mice with sepsis without affecting the infectious agent’s burden. This discovery inspired a clinical trial in Germany that is evaluating if the use of anthracyclines improves the course of sepsis and reduces the patients’ risk of death. But to take full advantage of these drugs, we need to understand how they confer tolerance to infection.

To explore this, researchers tested different anthracyclines in immune system cells of mice. The results were surprising: these anticancer drugs limited the levels of pro-inflammatory mediators produced by the cells when administered in low doses. This effect was maintained when researchers treated mice with sepsis with these drugs.

The next challenge was to understand how these drugs control inflammation. “We discovered that anthracyclines control relevant inflammatory genes in the immune system cells,” explains Ana Neves-Costa, a researcher at the IGC and co-author of the study. By forming a complex with the cell’s DNA, these drugs avoid the binding of factors that drive the expression of these genes. In result, cells produce less inflammatory molecules.

“This new mechanism is particularly important because it lacks the side effects caused by administering high doses of these compounds in chemotherapy,” the researcher adds.

“With this work we found a possible new solution to treat diseases caused by exaggerated inflammation, such as sepsis and rheumatoid arthritis, more effectively,” explains Luís Moita, doctor by training and principal investigator at the IGC leading the study.

“Given that these drugs are already approved for use in the clinics, repurposing these for new treatments will be much easier than starting from scratch,” he adds. It is also likely that the regulation of gene expression and the limitation of inflammation described in this study, which were previously unrecognized, contribute to the effectiveness of anthracyclines in cancer treatment.

The research is published in the journal eLife.