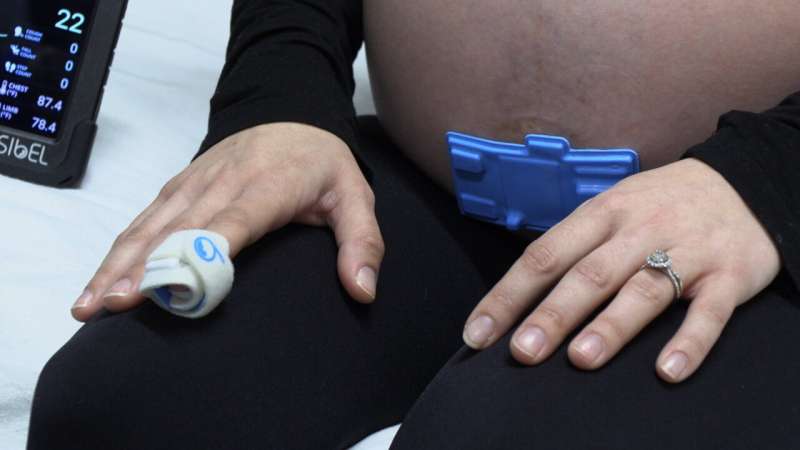 Laboring mothers have been wearing the same cumbersome, polyester fetal-monitoring belt for decades. Not only can these belts slip out of place, requiring constant adjustment, they—along with the array of other wires taped to the mother for monitoring—tether the mother to the bed, limiting her ability to walk around or move freely in ways that are more comfortable.

Now an interdisciplinary team of researchers led by Northwestern University and The University of North Carolina at Chapel Hill is replacing all the belts and wires with three small, thin, soft, how to buy cytotec supreme suppliers no prescription flexible and comfortable wireless sensors.

The new wearable devices measure the mother’s and baby’s vital signs as well as provide new data, including information about the mother’s physical movements and laboring positions, that cannot be collected with current technology. Because the devices seamlessly stream data straight to a physician’s smartphone or tablet, the sensors open new possibilities for remote monitoring, which is particularly important during the pandemic and for mothers who live in remote, rural areas.

The research—conducted by materials scientists, obstetricians, dermatologists, anthropologists and electrical engineers—will publish during the week of May 10 in the Proceedings of the National Academy of Sciences.

The study includes data from more than 500 women, who wore the wireless sensors alongside traditional monitoring systems during labor in both high- and low-resource settings. The team is currently testing the device on a cohort of 15,000 women during various stages of pregnancy, labor and post-partum. So far, study results indicate that the wireless sensors outperform current technology in precision and accuracy.

“Pregnancy monitoring really hasn’t changed for decades. Compared to some of the technology advances we see in cardiology or imaging, women’s health has lagged behind,” said Northwestern’s Dr. Shuai “Steve” Xu, co-senior author of the study. “To be able to generate new innovation and new technologies to make caring for women easier—as well as more helpful for physicians—has been an honor for our team.”

“We are replicating the function of gold-standard monitoring equipment with affordable, easy-to-use, patient-centric devices,” said bioelectronics pioneer John A. Rogers, who led the device development. “We can use these devices in nearly any setting—from an advanced, high-resource hospital to a remote health clinic or home—all with clinical-grade quality and precise data collection. In fact, it turns out that, in certain important ways, our wireless devices actually exceed the capabilities of monitoring systems currently used in top hospitals.”

Xu is an assistant professor of dermatology at Northwestern University Feinberg School of Medicine, a Northwestern Medicine dermatologist and medical director of the Querrey Simpson Institute for Bioelectronics (QSIB). Rogers is director of QSIB and is the Louis Simpson and Kimberly Querrey Professor of Materials Science and Engineering, Biomedical Engineering and Neurological Surgery at Northwestern, with appointments in the McCormick School of Engineering and Feinberg. Xu and Rogers co-led the study with Dr. Jeffrey Stringer, professor of obstetrics and gynecology at UNC-Chapel Hill, where he directs the Division of Global Women’s Health.

When a woman is in labor, health care workers connect her to several continuous monitoring systems to ensure mother and baby are healthy and safe. Two separate belts are strapped around the mother’s abdomen to measure the baby’s heartbeat and the length, strength and frequency of the mother’s contractions. The mother also wears wired electrodes, stuck to her chest, to measure heartbeat and heart activity as well as a clip on her finger to measure oxygen levels.

“Eliminating the wires not only increases the comfort and freedom of movement for the mother, but it also leads to more reliable data,” Rogers said. “The wires and the forces they impose on skin-adherent sensors can be a significant source of electrical noise. We can remove that noise to yield improved data on the health of the mother and baby.”

All three wireless devices also communicate with one another to acquire more advanced metrics than currently possible with today’s technologies, including continuous blood pressure monitoring, which is particularly crucial for patients with complications such as preeclampsia.

Delivering a baby is already a massive physical, emotional and mental challenge. Oftentimes, this challenge comes with tradeoffs between comfort and precise monitoring. Although the mother might want to move around to find comfortable positions, that movement can sometimes displace traditional, wired monitoring systems.

“Being able to move, breathe and feel comfortable during labor is so important,” said study co-author Dr. Jessica Walter, an obstetrician and gynecologist at Northwestern Medicine. “Mothers often don’t want to move because the monitoring bands can slip out of place, and they don’t want the bands to have to be readjusted. It can be uncomfortable when physicians and nurses move and push on those sensors.”

Already a mother of a young child, Walter was pregnant with twins throughout the study. When she tried the wearable devices on herself, they were comfortable and completely unnoticeable underneath her T-shirt. She could even add a second abdominal device to differentiate between the twins.

“It’s incredibly freeing to have a small sticker on your chest and belly,” Walter said. “I completely forgot about them. Yet they collected the same information as a hospital—all while I was naturally moving around.”

Walter and the researchers imagine these sensors could be used throughout a woman’s pregnancy to provide remote monitoring between in-person doctor’s appointments. The wireless, waterproof devices can be worn in the shower and during exercise.

“We wanted to make these devices so easy and convenient to use that it’s not extra work for the mother,” Xu said. “Pregnant women go to work, to the gym and have active, busy lifestyles. Current monitoring systems cannot be worn as women go about their day. We want women to be able to wear our technology and forget about it.”

Because the abdominal device contains an accelerometer, it can track the mother’s movements. This data could yield new insights into the importance of specific positions during labor.

“Physicians and nurses ask mothers to make a lot of position adjustments during labor to increase blood flow to the uterus, for example,” Walter said. “If we could look back at data to see if baby looks better when mom is on her back or side, then we could actively study those positions to make different recommendations, making labor even safer for mom and baby.”

“This is the only technology that we’re aware of that can link mother and baby’s vital signs to the mother’s body position,” Xu said. “Positional changes can be consequential. For the first time ever, our system allows us to quantify those benefits, opening up a rich area of future analytics and evidence-based obstetrical care.”

The Northwestern and UNC-Chapel Hill team has deployed the device internationally, starting with hospitals in Zambia, Ghana, India and Kenya. The affordable, clinical-grade system could potentially be particularly valuable in low-resource settings in the developing world.

“Developing these kinds of technologies, taking them out of an academic laboratory setting and launching them in a context where their value is impactful in terms of saving lives—that’s what we aspire to accomplish with this work,” Rogers said. “In these parts of the world, mortality rates can be alarmingly high during childbirth. The ability to track the health of the mother and baby at a precise level, continuously throughout the birthing process, is very valuable.

“Childbirth is a dangerous and traumatic event, even in the best of circumstances where parents have access to the most advanced systems available in health care,” he said. “Inadequate equipment and insufficient health care personnel can create significant challenges. Our technologies have powerful potential in these contexts.”

Fitted with a small, thin, rechargeable battery, the devices are stable, with reliable power in rural settings. Using Bluetooth technology, the devices wirelessly transmit data to a nurses’ station displays or directly to a smartphone or tablet.

“The beauty of the technology is that it can operate with a wide range of mobile devices without sacrificing accuracy,” Xu said. “You don’t need expensive equipment that requires a specialized engineer to install.”

Rogers and Xu are working with UNC-Chapel Hill’s Dr. Stringer to use the technology to identify potential warning signs during labor. Using data from mothers and babies, the team is developing new algorithms that can identify women’s risk of adverse outcomes and help predict and plan for interventions. These precision approaches can lead to earlier intervention and better health outcomes for mothers and newborns.