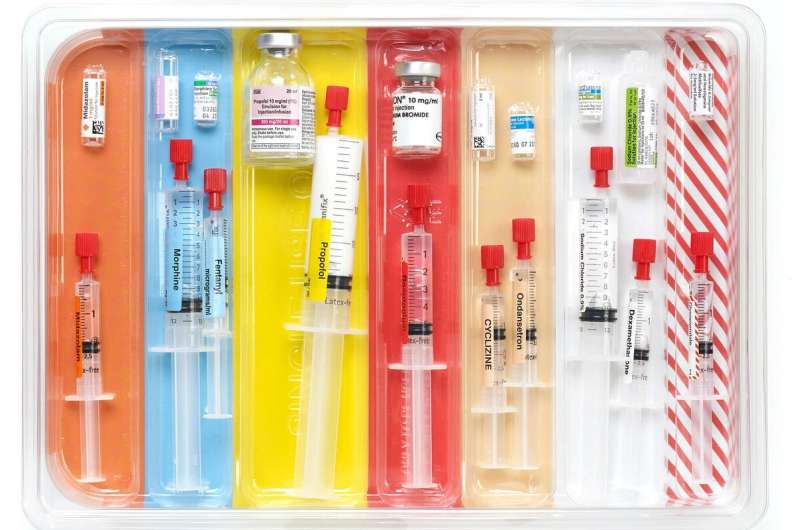 A simple change in the use of syringe trays could help reduce errors in complex clinical environments. This is the finding of research carried out by a team at the University of Derby.

The University was approached by UVAMED, a health care innovation company based in Leicestershire. The company had produced Rainbow Trays—color-coded compartmentalized syringe trays—and wanted to have their effectiveness evaluated.

Drugs used for anesthesia and sedation are prepared and administered in complex clinical environments and distracting conditions, which can lead to human error. Data suggests that drug-related errors—such as accidental syringe swaps—occur in 1 in 133 anesthetic administrations.

Based in realistic clinical skills suite environments at the University of Derby and a local NHS Trust hospital, the team used state-of-the-art eye-tracking technology, among other techniques, to test the trays’ effectiveness. The team worked with consultant anesthetists to design the tasks, including medical condition scenarios.

The results, plavix your period which have been published in the British Journal of Anesthesia, revealed that using the Rainbow Trays improved efficiency measured by search time for trays with errors and search time for trays with no errors—the trays helped make it quicker for users to make the correct choice first time. The eye-tracking data also demonstrated more efficient searching of the color-coded compartmentalized trays—it was much easier for the Operating Department Practitioners and anesthetists to make a decision without having to study the trays in as much detail.

Frances Maratos, professor of psychology and affective science at the University of Derby, says, “Our results are promising with respect to improving patient safety. For example, the organization of color-coded trays may facilitate secondary checks from theater staff such as Operating Department Practitioners, as an additional safety layer, with the aim of preventing drug errors in high-pressured environments such as operating theaters.”

Bev Fawdington, director of UVAMED, says, “This study provides clear evidence that a standardized system such as Rainbow Trays can reduce cognitive load and the risk of medication error during administration. These results—delivered on a project conducted almost entirely during the COVID pandemic—illustrate the ingenuity, tenacity and dedication of the research team and NHS participants. They show that standardizing the presentation of anesthetic drugs can improve both clinicians’ well-being and patient outcomes.”