Ion channels are proteins embedded in the cell membrane which control the bidirectional movement of charged species called ions across the impermeable cell membrane. Ion channels are highly selective and can be grouped according to their structure, either as members of the voltage-gated or ligand-gated ion channel families. 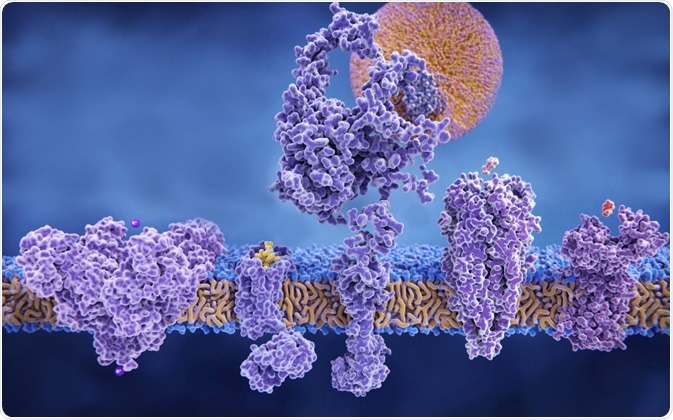 The transport of ions is essential to maintain electrophysiological balance on either side of the membrane, called osmotic balance, which is needed for signals to be transduced from their chemical (ion) form to a cellular response.

Signal transduction is affected by the opening and closing of ion channels in a co-ordinated manner. This generates a change in the voltage or membrane potential across the cell membrane, which can be propagated across many cell membranes. This mechanism is referred to as an action potential. It occurs across neurons, for example, in order to transmit information from the nervous system to the muscles in the body.

Electrochemical gradients underpin the generation of action potentials. This is an amalgamation of two types of gradients: (1) a chemical or concentration gradient, biamp nexium and (2) a charge gradient. Gradient refers to a difference in the concentration of a substance (ion or charge) between two environments that are separated by a barrier.

In the context of a cell, the extracellular fluid and intracellular cytosol are regarded as such environments. Ions will passively move from an area of high to low concentration (i.e. down their gradient).

Eventually, this charge difference, called the electric potential difference, reaches a point at which the electrical force that pulls ions up against their concentration gradient is balanced with the force that drives them down. At this point, there is no net movement and the cell is at equilibrium. This is explained here:

The action potential is comprised of four phases: resting, depolarization, repolarization and hyperpolarization. The generation of these phases occurs via the transient opening and closing of the ion channels in a selective, co-ordinated and controlled manner.

This state is referred to as the resting membrane potential and is the dominant of all action potential states. Sodium (Na+) and potassium (K+) govern the resting state in the following manner:

To maintain a net negative resting potential, the cell depends on the activity of a protein called the sodium-potassium pump, which uses energy to simultaneously pump K+ back into the cell and Na+ out. The ratio of movement is 3Na+ out for every 2K+ in.

Note that the gated sodium and potassium channels are closed in this state and are distinct from the leakage channels. These channels are gated by voltage.

A release of neurotransmitters across a synaptic junction, causes Na+ channels on the postsynaptic (recipient) neuron membrane to open so that Na+ ions flow from the extracellular environment into this downstream neuron.

This stimulation must reach a threshold (~-55mV) for an action potential to result. The net effect is the raising of the membrane potential. This is termed depolarisation, as the cell interior becomes more positive. The increased membrane potential can trigger neighbouring Na+ channels to open in a domino-like manner, so that the effect spreads across the neuron towards the axon terminus.

This phase is restorative, moving towards re-establishing the membrane potential. Here, the voltage-gated sodium channels are inactivated, stopping Na+ influx.

Simultaneously, voltage-gated K+ channels open. Since there is a higher concentration of k+ inside the cell, K+ exits or effluxes the cell. This is associated with a decrease in membrane potential towards the resting, more negative state, due to the loss of charged K+ inside the neuron.

The effect of the prolonged activation of the voltage-gated K+ channel results in further efflux of K+, and a concurrent decrease in membrane potential, surpassing the resting state value as the loss of K+ results in the loss of positive charge.

The increase in negativity of the cell is referred to as hyperpolarisation. Closure of the voltage-gated K+ channel enables the sodium-potassium pump to re-establish the resting state potential (~70 mV and –75 mV).

The sequence of events is illustrated below: 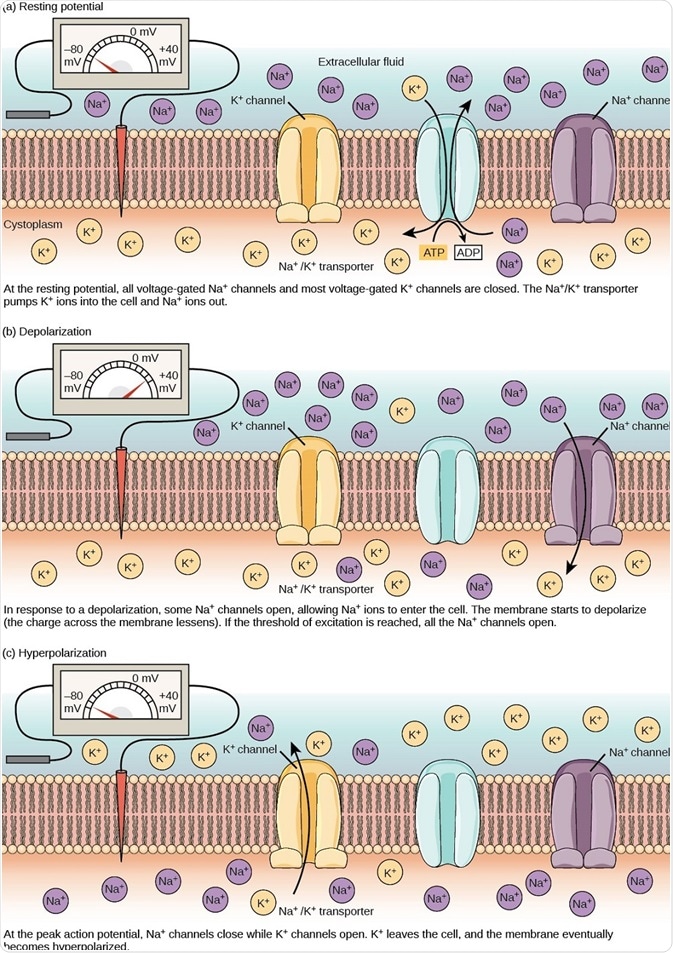 Figure 2. The (a) resting membrane potential is a result of different concentrations of Na+ and K+ ions inside and outside the cell. A nerve impulse causes Na+ to enter the cell, resulting in (b) depolarization. At the peak action potential, K+ channels open and the cell becomes (c) hyperpolarized. (Image and caption are taken from "How neurons communicate: Figure 2," by OpenStax College, Biology).

The action of ion pumps is essential in the role of signal transduction. Their speed and selectivity ensure the co-ordinated and timely movements of ions to establish an action potential. The result is the successful propagation of a signal transduction, necessary for the operation of the nervous system.

Hidaya is a science communications enthusiast who has recently graduated and is embarking on a career in the science and medical copywriting. She has a B.Sc. in Biochemistry from The University of Manchester. She is passionate about writing and is particularly interested in microbiology, immunology, and biochemistry.