It took my husband Mike and I three and a half years to have our baby girl, Imogen.

We went through three miscarriages and two rounds of fertility treatment before we were able to bring her home safely.

I was apprehensive about Imogen’s birth, as any new mother during Covid was, and when she was placed on my chest for the first time, I remember feeling overwhelming relief. She was here and she was safe.

We had been on such a journey to have her, and it was incredible to finally relax into being parents, and enjoy a little bit of relative normality.

Little did we know that that would last a grand total of 10 weeks.

In November 2020, when Imogen was just eight weeks old, we noticed that her right eye had a milky white glow in certain lights. She also had a squint.

Although I had a vague memory of a white glow being a sign of something sinister, I pushed it to the back of my mind – you never want to believe it could be the worst-case scenario.

But after noticing the glow, side-effects of bupropion we spent a lot of time googling, to try and put our minds at ease. However, our searches kept bringing up ‘Retinoblastoma’ – eye cancer. So, we decided to make a doctor’s appointment ASAP.

Two weeks later, we were referred to Noah’s Ark Children’s Hospital, in Cardiff, half an hour from our home in Barry.

Going into the appointment, I was relatively calm as we had been reassured by our GP who suggested it could be something like a cataract. It wasn’t until the consultant asked if I was OK that I realised I maybe shouldn’t be. 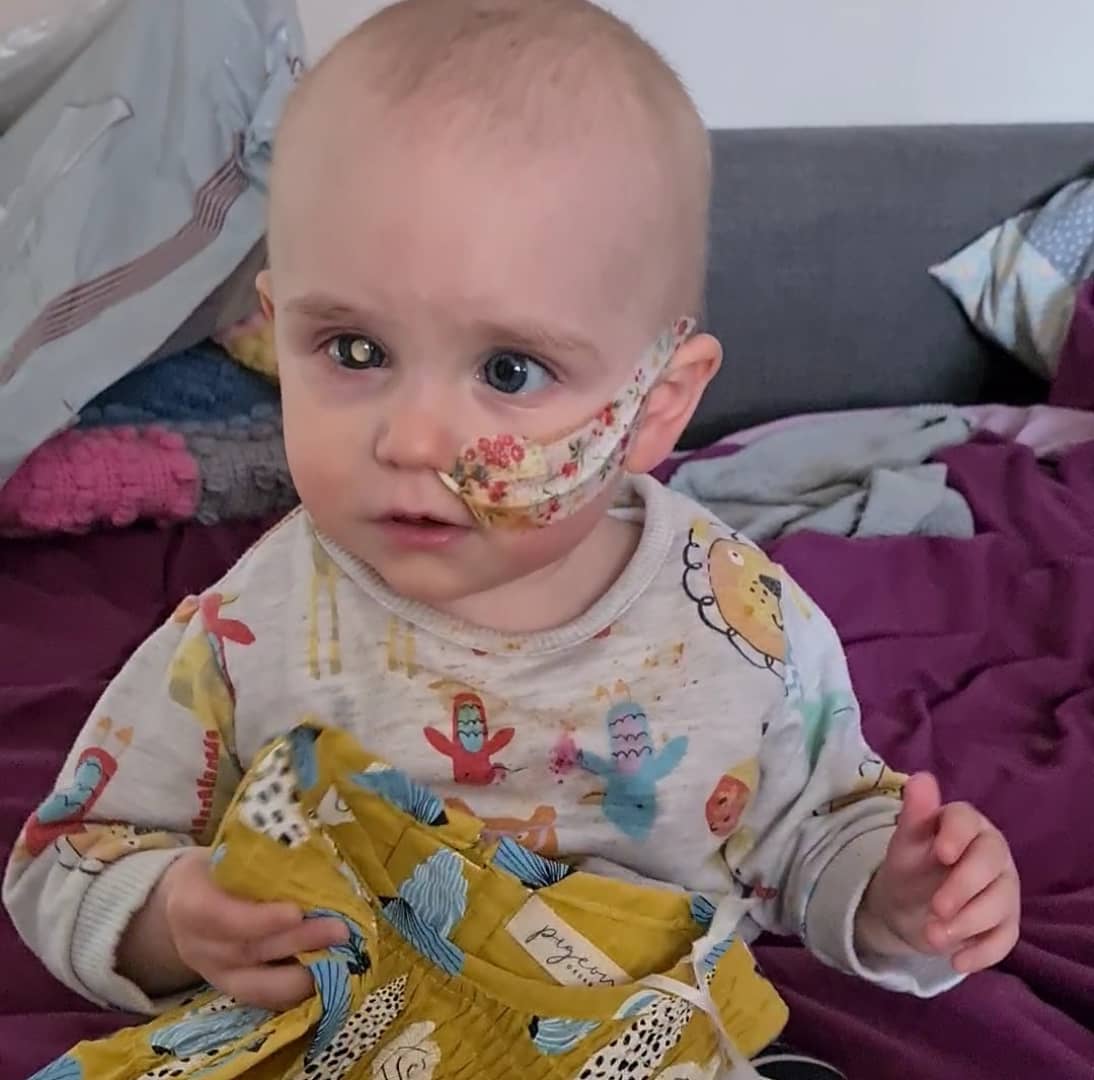 Imogen was given multiple eye exams, including an ultrasound – which showed multiple masses. I tried not to cry as I looked at the images of the scan. The Covid rules had meant Mike had to wait in the car but the consultant said that he would ‘break the rules’ and asked him to come in, to hear what he had to say.

We were told that Imogen had ‘bilateral retinoblastoma’ – cancer in both of her eyes.

I felt like my heart had physically broken hearing this news and the rest of the appointment was a complete blur, as were the days that followed. We somehow stumbled through the week between her initial diagnosis and her specialist appointment.

I turned 30, we put up the Christmas tree in the hope that Imogen could see the lights, and we held our daughter wondering whether this would be the only Christmas we would get to spend with her.

Within a week of Imogen’s initial diagnosis, we travelled to see the specialist team at Birmingham Women’s and Children’s Hospital. It was here we learned that Imogen had multiple tumours in both her eyes and that her right retina had detached, due to that tumour growing so aggressively. We were told this meant she could only see light in this eye, something she lost not long afterwards.

In December 2020, Imogen began systemic chemotherapy, having laser treatment in Birmingham, followed by chemotherapy in Cardiff every three weeks. Fortunately, we found out from a bone marrow biopsy that the cancer hadn’t spread to any other parts of her body.

But unfortunately, she tested positive for MRSA in January. This meant she had to be in isolation for all of her subsequent hospital appointments, as it is a very contagious infection. And to make matters even worse, this was all at the height of the pandemic. Due to the Covid ‘one-parent rule’, my husband, Mike, often had to wait in a hospital car park, or hotel across the road, while I attended Imogen’s appointments alone.

It was hard. As I was breastfeeding Imogen, I was the one who attended everything, all while Mike was left out of meeting her treatment team, unable to ask questions, and not able to support his partner and daughter.

I had to entertain and keep calm our young baby, often while she was fasting for hours or hooked up to her central line for days, all while trying to absorb and relay the information the doctors and nurses were telling me. It was overwhelming and despite the doctors and nurses being incredibly supportive, there were moments when I felt I was at breaking point, and couldn’t properly support Imogen in every way she needed.

Our family also had to watch from the side-lines, unable to provide the practical support needed to allow us to solely focus on Imogen. She was immunosuppressed and so, our family was forced to go months without seeing her, as the risk of her catching  Covid  - or even a common cold – was too high.

Mike’s parents live nearby and were able to drop food parcels on our doorstep and wave at Imogen through the window, which was a real lifesaver. My parents are further away so we video called them regularly, due to lockdown travel limitations.

Not being able to see anyone made things a lot more difficult and it’s hard to think about how different it could have been if  Covid wasn’t an issue, and we had been able to get practical help from friends and family.

We were however, extremely grateful for the messages and virtual support from family and friends who rallied round in any way they could. Many people fundraised for the charities which were supporting us (namely, LATCH Wales and The Childhood Eye Cancer Trust). We also had over 40 people donate blood when Imogen needed a post chemotherapy blood transfusion. We called it the #TeamImmy initiative, and tried to raise awareness of retinoblastoma and the importance of blood donations for cancer treatment through our social media.

By February 2021, Imogen had just completed her fourth round of systemic chemotherapy. She was relatively stable by this point and we were just learning the ropes of tube feeding, as a supplement to her breastfeeding.

Mike and I were due to get married in April 2020 but it had been cancelled due to the national lockdown. We had rescheduled it for February 2021, before Imgoen had been born or diagnosed, and we decided to go ahead with it, despite everything we were going through.

We weren’t allowed to have any guests and were only allowed our two witnesses there with us, our close friends and neighbours Dan and Kate.

But it was made extra special being able to have Imogen there with us.

After our long journey to have Imogen, her diagnosis and treatment, and being unable to have our family with us due to Covid, having Imogen between us as we said our vows meant everything. We are a team, and to us, that’s exactly what our marriage means.

We just didn’t expect that we would end up spending the second half of our wedding day back in hospital.

Imogen hadn’t been very well the morning of the wedding. She was struggling with diarrhoea and vomiting, and we were concerned she may have picked up an infection – which could be extremely dangerous as she was immunocompromised. She spent most of the morning just wanting a cuddle, and was obviously feeling rubbish.

We got married  at 1pm and by 4pm we ended up back at hospital.

We phoned the nurses, who advised it was best to bring her in to be checked over. As they knew we were getting married that day, they told us to bring her in afterwards – as long as she was still eating and drinking (which she was), and didn’t have a temperature (which she didn’t).

As the rest of the patients in daybeds had gone home for the day, we were both allowed into the hospital – as opposed to the one parent rule – and walked in still wearing our wedding clothes.

The staff greeted us with decorations and cake, doing their best to ensure we were still able to celebrate our wedding. Imogen and I stayed two nights in the ‘Honeymoon suite’ – or just room 9 as it’s normally known – while Mike returned home.

It wasn’t how we pictured our wedding day, but we were just grateful that Imogen was getting the care she needed.

At this point, Imogen was five months into her treatment, and was continuing to have laser treatment and chemotherapy. It’s heartbreaking to see your seven-month-old child go through such an ordeal and I would have done anything to swap places with her.

By June, despite six rounds of systemic chemotherapy, laser treatment, cryotherapy (freeze treatment) and the radioactive plaque, it was evident that her retina wasn’t going to attach on its own.

Although her left eye was responding well to treatment, we were running out of treatment options to save her right eye. The decision was taken to try Intravitreal Chemotherapy – IVC – (chemotherapy injections directly into her right eye). Although initially there seemed to be no change to her tumours, in August 2021 a few months after her third round of IVC, her consultant amazingly found that her tumours had finally started to respond to her multiple treatments.

We were used to having the  rug ripped out from  underneath us, but October brought more  positive news: the retina  in her right eye had spontaneously reattached itself! I promptly burst into tears of disbelief and relief – our girl finally had a run of good luck.

Imogen is currently attending Birmingham Women’s and Children’s Hospital every four weeks for eye exams under anaesthetic (EUA’s), alongside laser treatment. She will need to continue her regular trips up to Birmingham for the foreseeable future to monitor her eyes for new tumour growth, or potential activity in her current tumours.

Imogen is now 14 months old. She has been our light throughout this whole period. Despite everything she’s had to go through, she is such a happy,  mischievous and determined little girl.

Watching her thrive and defy her cancer on a daily basis makes us so proud, and gives us the strength we need to keep putting one foot in front of the other.

We are constantly celebrating all that Imogen has overcome; celebrating how incredibly strong she is; and celebrating the fact that, due to her fast diagnosis and incredible treatment, we are still able to have our beautiful, happy girl here with us.

In the future, we hope Imogen is proud of everything she has overcome. We want her to be able to hold her head high and understand just how brave she is for battling something most adults would struggle to cope with.

For any parents out there reading this: if you spot a white glow in your child’s eye in a certain light, or in a flash photograph, or notice a squint, It is always worth getting it checked out by a professional.

It could be absolutely nothing, but we are thankful everyday that we got Imogen’s eyes looked at. Her fast referral may well have saved her life, and for that we will be forever grateful.

For more information on the signs of retinoblastoma, please visit chect.org.uk.

In this exciting new series from Metro.co.uk, What It Feels Like… not only shares one person’s moving story, but also the details and emotions entwined within it, to allow readers a true insight into their life changing experience.