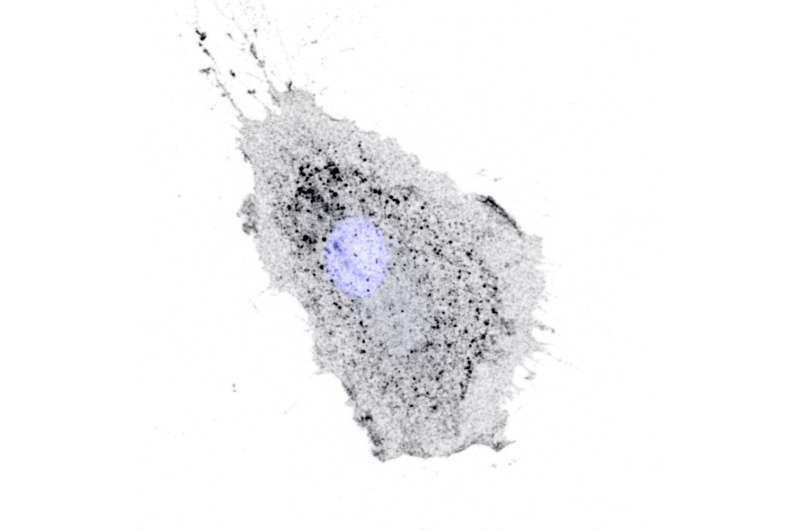 A protein involved in making cells move offers a clue to how certain types of cancer metastasize and develop into secondary tumors, according to new research from the University of Warwick.

Scientists from Warwick Medical School have demonstrated for the first time that levels of this protein can increase and decrease the movement of a cell, including cancer cells—suggesting that they could play a role in the spread of tumors.

The study is published today (21 July) in the Journal of Cell Biology and was funded by the Medical Research Council, part of UK Research and Innovation.

The researchers are investigating a tiny cell component called an Intracellular nanovesicle (INV) which acts like a courier within a cell by transporting cargo to where it is needed. When a cell moves, the INV moves a particle called an integrin from the cell’s surface to ‘unstick it’ from the surface it is attached to. It then recycles and replaces the integrin to stick it to a new surface.

INVs have a protein called Tumor Protein D54, increased levels of which have been associated with certain types of breast cancer and often a poor prognosis for the patient. These patients tend to have more metastases, where tumor cells spread to other parts of the body.

To investigate TPD54’s role in cell movement, how bontril works the Warwick team observed cells migrating on a surface coated with fibronectin, a type of extra-cellular matrix, using a live cell microscope. They then reduced or increased the expression of the protein TPD54 to mimic the expression in a cancer cell, observing how the cell migrates more or less depending upon the levels of TPD54.

They also conducted the same experiment using ovarian cancer cells inside a 3-D mesh rich in fibronectin, a more accurate representation of how a cell would behave inside a tumor. When they depleted the levels of the TPD54 protein, the scientists could see that the cells migrated less.

Lead author Professor Stephen Royle, of Warwick Medical School at the University of Warwick, said that “there are circumstances where you don’t want cells to move around, such as in cancer. We show in this paper that if you decrease the levels of the TPD54 protein then cells move less, and if you increase the levels they move more. It offers an explanation for why cancer cells that have overexpression of this protein tend to be more metastatic and spread.

“The name Tumor Protein D54 comes from the fact that it is overexpressed in cancer but not a lot is known about it at the molecular level. We have found how this protein attaches to INVs inside cells and controls what cells normally do.”

Despite its name, Tumor Protein D54 is involved in a number of normal processes of a cell, and is also involved in the immune response, wound healing, and other functions. The research suggests that TDP54 would not be an ideal target for a cancer intervention due to its role in these normal functions of the cell, but it does give scientists a better understanding of how integrin trafficking is altered in cancer.

Professor Royle adds that “this protein is actually a healthy protein. It’s needed for these INVs to move around, to move other cargoes, and perform other functions besides migration. It’s one of the most highly expressed proteins in normal cells which indicates that it’s probably doing something important. We think it has something to do with this army of INV couriers working within a cell.

“But in cancer, we’ve suddenly got lots of couriers trafficking lots of integrins, and so we get more movement of cells and that’s not good. If you’ve got cancer cells, you don’t want them to migrate.”

The Warwick group discovered INVs in 2019, having previously been overlooked. At around 30 nanometres across, they were so small that the team had to use a combination of electron microscopy and the Warwick Open Source Microscope, a super-resolution light microscope built at the University of Warwick, to observe them.

Professor Royle adds that “they were hiding in plain sight—you can go back to micrographs from the fifties and can see that they were there, it’s just we didn’t have the tools to find them.