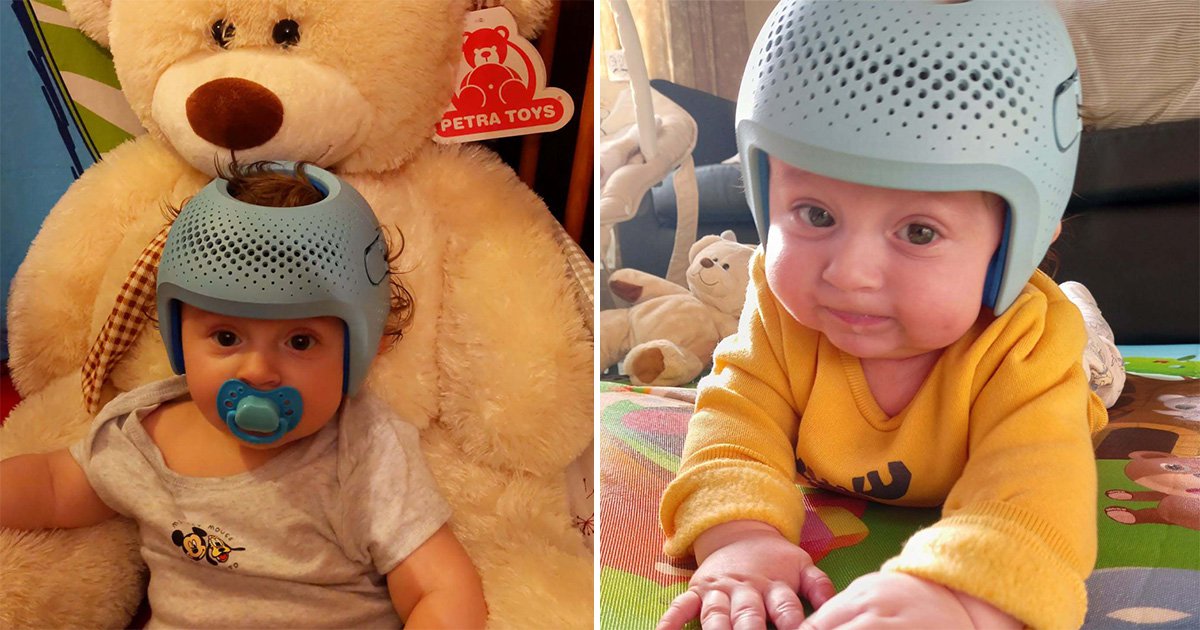 When he was two months old,  David and Eva noticed something was wrong with their baby son Sebby.

The parents saw that Sebby’s head was flattened at the back on one side, causing his forehead to move forward and his ears to be unaligned.

Two-month-old Sebby was soon diagnosed with severe deformational plagiocephaly – also known as flat head syndrome – a condition that affects around one in five babies.

It’s not typically a cause for concern, as it doesn’t have any effect on the brain, and the head shape and will often improve by itself over time.

However, as Sebby got older his condition became more visible and David and Eva started to worry about the psychological effects it might have on their son in later life.

As a result, the family sought private treatment and an initial assessment showed Sebby’s condition to be in the ‘red zone’, meaning his condition is fairly severe.

The baby was then given a helmet to wear 23 hours a day – a treatment that costs around £2,500 and can take two to five months to work.

Ideally, buy advair au no prescription it needs to be on full-time before the age of nine months – when the skull becomes stronger and more difficult to mould.

The family know that the helmet might not fully resolve the problem, but they hope it will be a big improvement.

David, 38, said: ‘We’re responsible parents and don’t feel that the right thing is to “wait and see” as we already know in our case.

‘Yes, it will improve by a bit but still remains in the red zone – which is not reversible and stays visible for the rest of our life.

‘That could have a huge psychological impact on quality of the life.’

Sebby, now seven months, has fully embraced his new look – although has started to be more aware of it.

‘He has quite long hair at the moment so sometimes it can get quite sweaty and we have to remove it a lot, but he wears it most of the day,’ David adds.

‘Every day is a different day but we obviously have to remove it when he is having a bath and when his hair is drying out.

‘At the beginning he was completely okay but as he is growing and, at nearly seven months old, he is just more aware of his surroundings and more aware of the helmet.

‘For example, sometimes when we play he might touch and scratch the helmet instead of his head. He can sometimes become quite panicked or be a little bit nervous about it, so we remove it for a bit and then put it back.’

David and Eva have now set up a fundraising page to continue with Sebby’s treatment – stressing that every penny counts as they continue to search for the ‘light at the end of the tunnel.’

Their donation page can be found here.