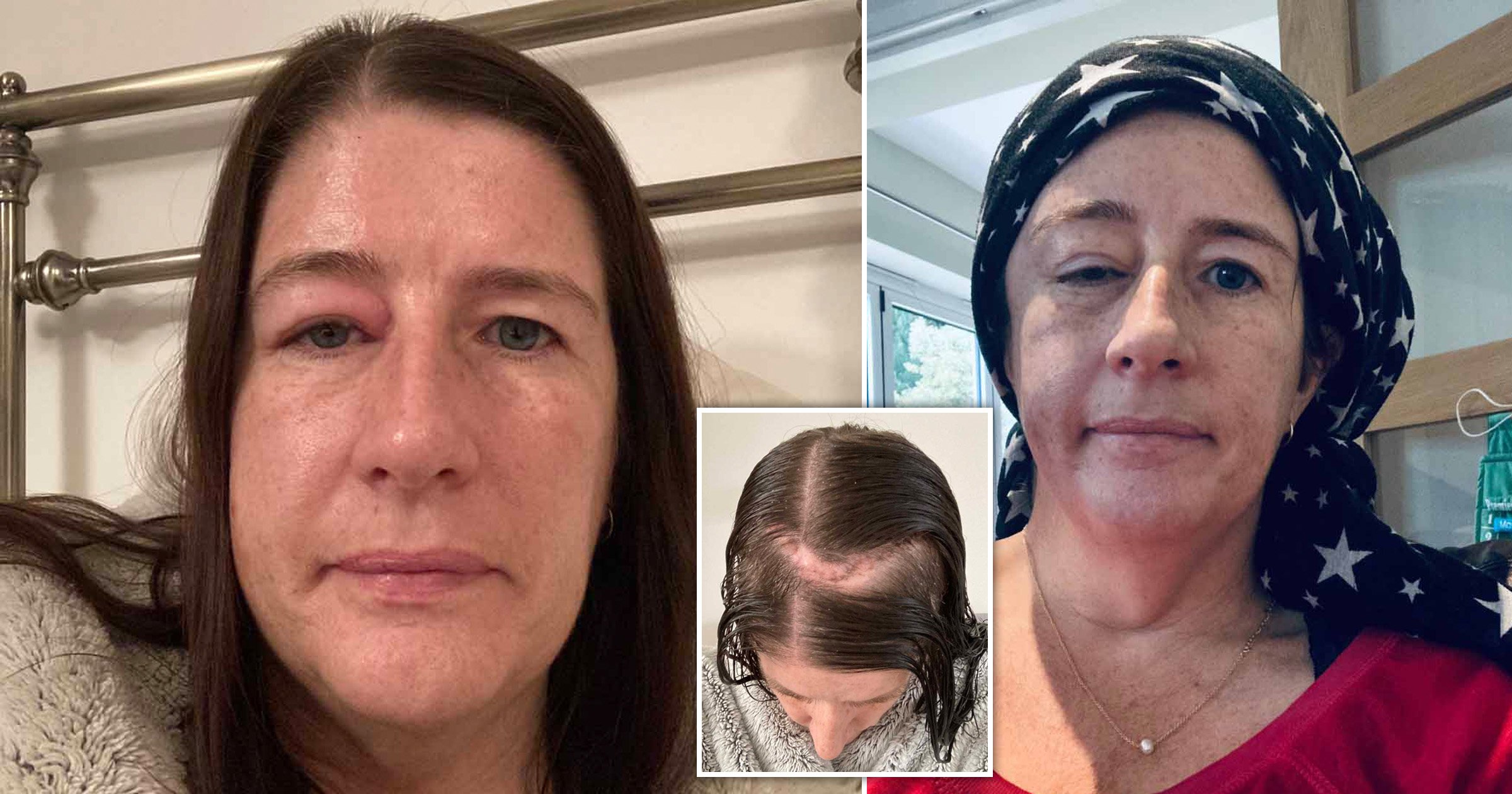 When Kirsty Drury noticed her right was bloodshot and a touch swollen, she assumed it was just conjunctivitis and that she was in need of eye drops.

But when the 45-year-old programme delivery manager for Transport for London went to the doctor, she was told that very same day that she in fact had a brain tumour growing into her skull.

Kirsty, who has four children and lives in Tring, Hertfordshire, with her husband, said: ‘When I was first told I had a brain tumour, I thought it meant I was going to die.

‘When you walk into the doctor’s surgery with suspected conjunctivitis and walk out with a brain tumour, you can’t be blamed for thinking the worst.

‘I feel so lucky to be here and to show that there is life after a brain tumour diagnosis.’

She said: ‘I thought I had an eye infection and went to get eye drops from the pharmacist, allied technologies singapore who suggested I see a doctor, so I booked a GP appointment.

‘It seemed a bit drastic as I was sure it was just conjunctivitis, but I thought it was best to follow the advice.’

Kirsty’s doctor immediately referred her to an eye hospital in Buckinghamshire.

She said: ‘I was sent for a CT scan at the hospital and later that same day, I was taken into a room to discuss the results.

‘I had no idea what was coming. The reality of my condition was a total shock.’

The scan revealed she had spheno-orbital meningioma – a brain tumour that commonly grows inward, indenting and causing pressure on the brain or spinal cord.

Kirsty said: ‘I didn’t want to know how big the tumour was, but it was slowly growing into my skull and into the chewing muscles of my mouth.

‘Doctors told me that 80% of meningiomas are benign, but there would be no way of knowing for sure until I had surgery.

‘I honestly thought I was going to die.’

Kirsty was referred to a neurosurgeon, who recommended an operation to remove the mass.

She said: ‘I had a very bleak mindset about it. There were statistics about how less than 12 per cent of people with brain tumours survive for five years after diagnosis.

Kirsty’s surgery consultation was booked for December 2019, with a plan to operate by March but, when the pandemic hit, her procedure was postponed.

‘I had to sit tight, which was actually a relief because I was terrified of having the surgery,’ she said.

‘It wasn’t until September that I started ringing up again, asking when my surgery would be.

‘Although I was coping pretty well and running regularly was helping to distract me, my mental health wasn’t great, because I was convinced that I was going to have a bad outcome – that I’d find out my tumour was growing faster than expected or that it was cancer.

A full year later, Kirsty had surgery to remove most of her tumour. One positive is that that operation confirmed the tumour wasn’t cancerous – but recovery has still been tough.

Kirsty said: ‘I returned to work this February and I have been slowly recovering at my own pace.

‘There are certain side effects from the procedure. I struggle a bit with my memory recall and at work I find that I need to read over things a few times to make sure I remember.

‘I have a slight dent in the side of my head and a scar along the top of my head but other than that, I feel incredibly lucky.’

Kirsty now has an MRI scan every six months to see if the remainder of the tumour has begun to grow again, as it couldn’t all be removed, but she no longer has to take any medication.

She continued: ‘Funding for charities like Brain Tumour Research is so important, because there’s still so much that we don’t know.

‘In my case, my doctors and I are unsure what we can do to stop my tumour from growing back.

‘But I’m just so glad I went to the doctor when I thought I simply had an eye infection.

‘I’m horrified to think of what could have happened if the tumour had been left to eat away at my skull and face.

‘Now I feel like I’ve got my life back.’

Hugh Adams, head of stakeholder relations at Brain Tumour Research, is delighted that Kirsty is speaking out about the charity.

He said: ‘We first came across Kirsty on social media after she shared important information about brain tumours from London Underground’s ‘All on the Board’ during International Brain Tumour Awareness Week.

‘We’re very excited to have her support and look forward to working with her to help raise more awareness of brain tumours in the future.’