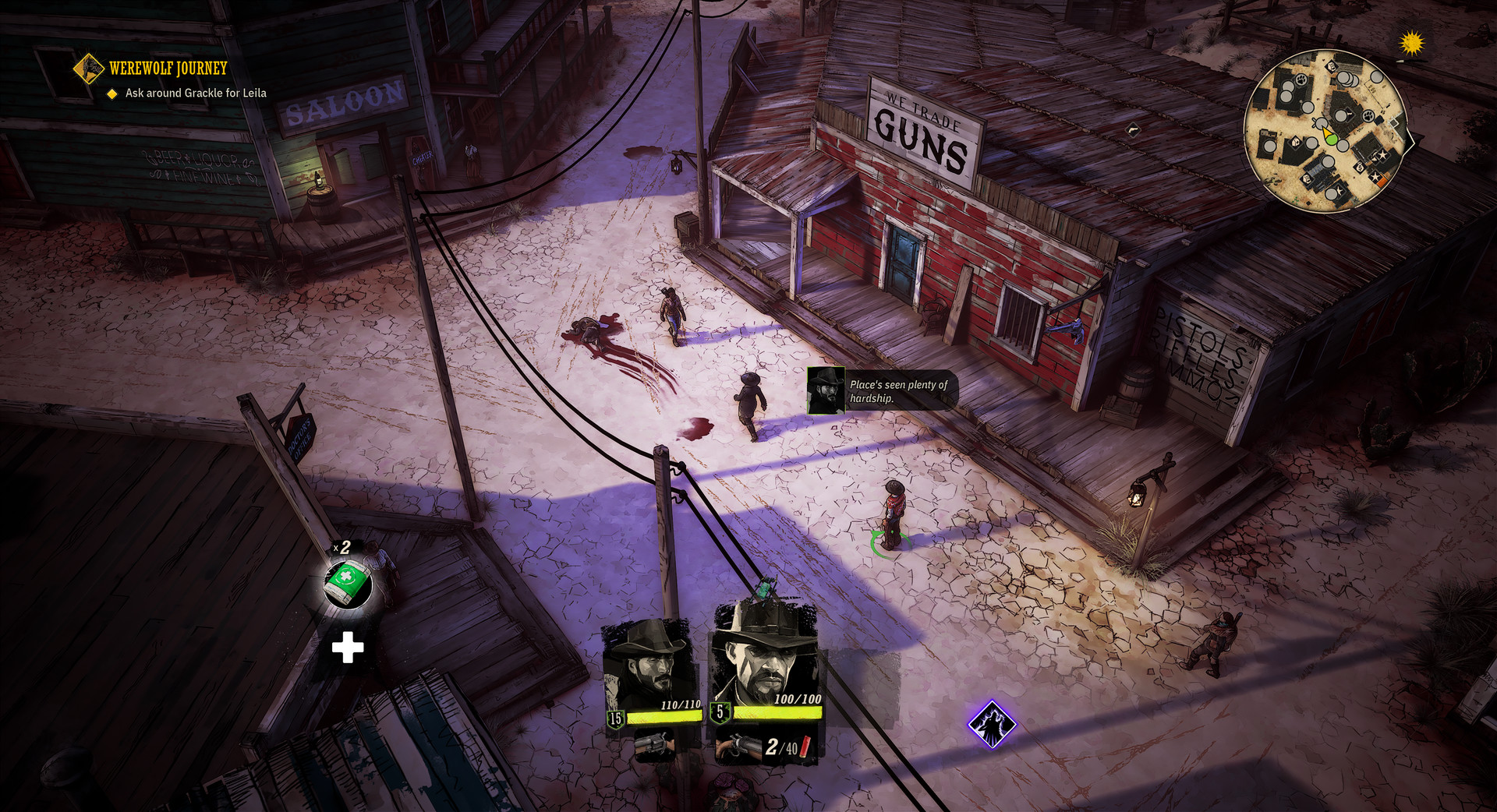 An immersive sim from the founder of Dishonored and Deathloop developer Arkane takes a trip to the extremely Wild Wild West.

Like walking simulators, immersive sims belong to a genre that’s sold short by its meaningless name. Games like Looking Glass Studios’ Thief, System Shock, and Deus Ex, or more recently Arkane’s Dishonored 2 and Prey don’t really need a separate designation as while they do all emphasis freedom and experimentation in their gameplay they’re still all very different experiences. That’s certainly true of Weird West, the first game from new studio WolfEye, started by one of Arkane’s original founders.

All of the above games use a first person viewpoint but the most eye catching difference when you start playing Weird West is that it’s viewed from a top-down perspective. It’s also set in a version of the Wild West that has a considerably larger population of werewolves, zombies, and wraiths than is traditionally portrayed.

You start the game playing a bounty hunter wrenched out of retirement when someone kills her son and leaves a fiery brand on her neck. Grabbing her shootin’ irons, she sets off to hunt down those responsible and wreak revenge. Very quickly you discover that this is no ordinary case, with whispers of a 4,000-year-old immortal, cannibalism, and shape-shifting sirens to go with the usual outlaws, sheriffs, and dusty one horse towns.

Walking around its map, distances are measured in days and hours, with the day and night cycle deciding whether you arrive in town to find the shops closed and have to break in through an unsecured window or loiter until morning to do your trading. The only 24-hour service is the sheriff and his bounty board, where you can agree to take down outlaws in return for cash rewards.

Bounties mean hiking across the map to a deserted town or disused mine to stalk your target. Stealth is vital, especially in the early days when you have minimal access to guns, ammo, and special abilities. Using long grass to conceal yourself, and avoiding vision cones on the mini map, you creep about, quietly choking out guards and dumping their snoozing carcasses in bushes to avoid raising the alarm.

If you played Dishonored you’ll already be familiar with the save scumming that’s absolutely encouraged in these games. Save and quick save are bolstered by frequent auto saves to give you a range of possibilities if you make a mistake, either by getting discovered too soon or accidentally killing someone you’d rather have kept alive. In Weird West it’s perfectly possible to shoot key characters, and once dead they never come back, their plotlines and quests lost forever.

It’s a key tenet of the genre, which believes strongly in player freedom and consequential actions. Take down a bandit outlaw and you’ll get a reward, but any surviving henchmen or family members may well start a vendetta against you, waiting in ambush to exact their own bloody retribution for your killing or capture of their friend.

However, this is a feature that works better in theory than in practice. Although all courses of action are open to you, some just prove too difficult; the battles they trigger making you face such overwhelming odds that even after multiple attempts you realise you just can’t follow your convictions and have to settle for the more survivable route. That may well be true to life, but it’s also frustrating in a game that claims to give you unlimited agency.

There are also plenty of moments that feel unfairly scripted rather than a direct consequence of your decisions, for instance when your reputation suffers as a result of committing a crime that was witnessed by nobody. In one section, we wiped out the entire leadership of a cult after discovering their duplicity, only to have to go through with their mission anyway, because that was the only story quest marker available.

More mild frustration springs from the gunplay, which feels more suited to mouse than controller. Aiming using a joystick with the distant third person view feels wobbly and imprecise, especially when fighting numerous opponents. That sense is heightened in the confines of a building, where things get confusing in short order, a sense that’s exacerbated when everything catches fire, as it’s often prone to.

Soon you move on from the bounty hunter role, occupying the body of a Pigman, a grossly disfigured semi-porcine human who’s reviled by all. In the first settlement you try and enter, the marshal runs you out of town and threatens to shoot you on sight if you ever return. It’s an interesting counterpoint to the bounty hunter, who was widely welcomed wherever she travelled.

By the time the closing credits roll, you’ll have taken over the bodies of three more Weird Westerners: a native American, a werewolf, and an Oneirist – a robe-wearing cult member whose sect has visions of a coming apocalypse. Each has a very different perspective on the world and playing from these varying viewpoints is one of the highlights of the game.

That said, it’s the things each character has in common that undermine the experience. In each case when you start in a new body you’ll have to sweep the cash together to buy a horse. You can live without one, but it makes travelling far more arduous and drawn out than it needs to be, so it’s really non-negotiable, as is acquiring new weapons and powering up your special abilities.

Perks, unlocked by finding special golden playing cards, are common to all characters, but special abilities are discrete, so you’ll start each new role seriously underpowered as well as horse-less. A few bounties and selling off junk, including weapons and clothing, in towns eventually lets you overcome those early hurdles, but doing that five times in a row provides a steadily reducing sense of fun.

That sameness unfortunately also applies to the gameplay loop, which involves travelling to a location, creeping about taking out guards, shooting the rest, searching for a special thing, and taking it back to the person who asked for it. That repetition is even more noticeable because of the game’s cookie cutter locations. The same buildings are recycled across every town, and underground mines and temples all have identical architectural and geological features.

In Dishonored, the architecture was a major part of the game and its sense of immersion. Getting from A to B meant working your way through vents, or across rooftops, or taking possession of a rat or fish to enter through an otherwise inaccessible drainpipe or waterway. In Weird West every building is accessible by door or window. It can’t help feeling a bit one note.

That’s not at all to say it’s a bad game, in fact quite the reverse, it’s interesting and ambitious, its plot drip-fed to maintain the mystery, the continual body swapping left unexplained until the very closing scene. It’s unfortunate that its lofty aspirations are undermined by the gameplay and its awkward camera, which keeps you a long way away from its portmanteau cast, never really letting you get to know any of them.

Stupid name aside, the immersive sim genre is always inspiringly different, and distinctly under-populated, so any new attempt, especially one bringing further innovation, is a welcome addition. Weird West is a well made and deeply idiosyncratic game, but some of its more aggravating design choices hold it back from the greatness of its stablemates. It’s still an excellent calling card though and a promising start for WolfEye Studios.

In Short: Despite some of the same minds behind Dishonored being involved, this top-down immersive doesn’t live up to its soaring ambitions and often struggles to entertain.

Pros: Five characters to play as, each with a very distinct view of the world. A plot that keeps you guessing right to the end and a sense that many actions you choose have long term consequences.

Cons: The gameplay loop lacks variety, the distant top-down perspective prevents any real sense of immersion, and having to start practically from scratch for each new character only serves to underline the repetition.