VR games don’t tend to receive much hype – the entry point is still rather pricey for most gamers, meaning its best titles simply don’t reach the large audiences that they might deserve.

TheGamer’s Lead News Editor George Foster and Evergreen Editor Ryan Bamsey took on three VR games for the Meta Quest 2 at EGX 2022 in London. The end result was two editors sitting on the ground with thumping headaches thanks to the intrinsic, nausea-inducing effects that VR tends to bring, the way they tried to play them consecutively, and the fact that the convention hall was cloyingly warm. Nevertheless, they stuck out as very memorable experiences. 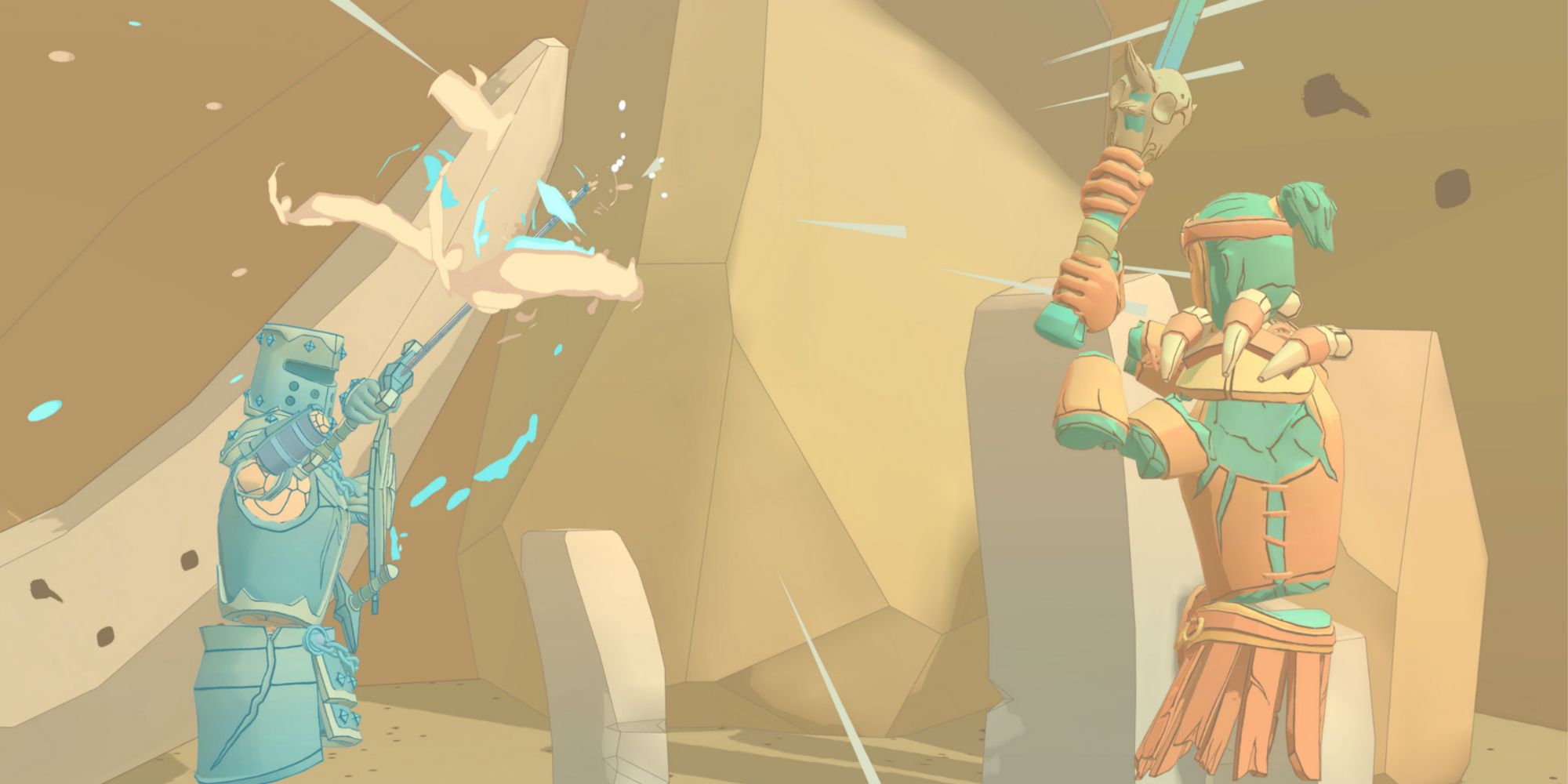 Ryan Bamsey: This is the game I was most excited to try out. Broken Edge is a class-based dueling simulator from Trebuchet that revolves around swordplay – the aim of the game is to break your opponent’s blade and strike their body, and each class has a different sword and a different set of tactics to use. I sprung for the Duelist, slated as one of the beginner classes with a style closer to fencing – I’ve always wanted to try my hand at fencing, and VR’s ability to satisfy a fantasy was fantastic.

The controls feel great and responsive, and the menu buttons being floating candles that you slice in half is a neat detail to look out for. Overall, I’d say this is the game that got me most interested in finally springing for some PC-compatible VR gear myself. I’m not just saying that because I beat George 3-0 when we played, and that’s definitely not just because he chose the hardest class. That would be inaccurate. I’m simply a natural swordfighter.

George Foster: I’ll concede defeat here, Ryan did completely kick my ass. Let’s give me some credit here for going for the Samurai, the hardest class in the game. The devs told me that I was supposed to be posing after each strike, but that clearly didn’t get through to me as I didn’t even hit Ryan once.

As a first-person sword fighter, Broken Edge wasn’t anything too unique, but by the sheer fact that I found the Samurai impossible to use while Ryan seemed to fly away with the Duelist, it does seem like the classes do give it a unique edge over more basic titles, and its pastel art style made it easy on the eyes. 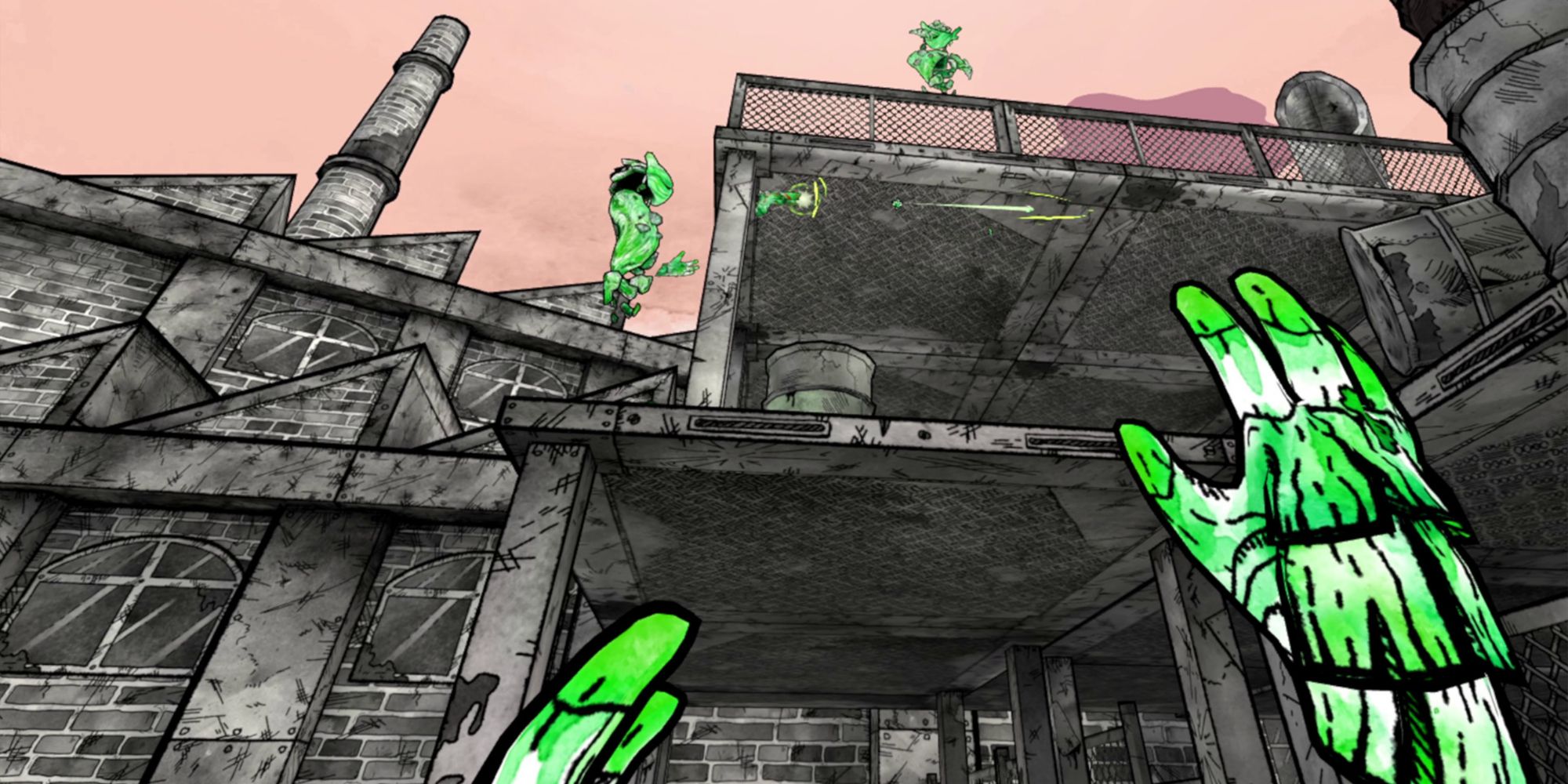 RB: Swept quickly from swordplay to time loop puzzles, We Are One from Flat Head Studio was the trippiest experience of the day. In this game, you must record actions in the bodies of various clones, interacting with yourself in a repeating time loop to solve puzzles. These invariably involve shooting objects and enemies, and with each loop lasting only 30 seconds, you need to think fast.

There’s something incredibly humbling about seeing your past self flaccidly throw important items at you, only for them to fall out of your reach. I looked back up at the weakling with the awful throwing arm, and he just shrugged. How dare 30-second past Ryan do that?!

We Are One makes you rely on yourself in a way that no other game does, and the result is that the failures feel crushing (especially when you can hear a certain colleague snickering behind you), but the successes are glorious.

GF: Out of the three that we played, We Are One was easily the most exciting for me, which surprised me considering my love of fighting games like Broken Edge – I guess losing to Ryan really knocked it down a few notches for me.

I’m not massive on puzzle games, but teleporting to a lower part of the level and then catching a gun that my past self had thrown over the edge was such an “aha!” moment that really showcased what virtual reality is capable of. 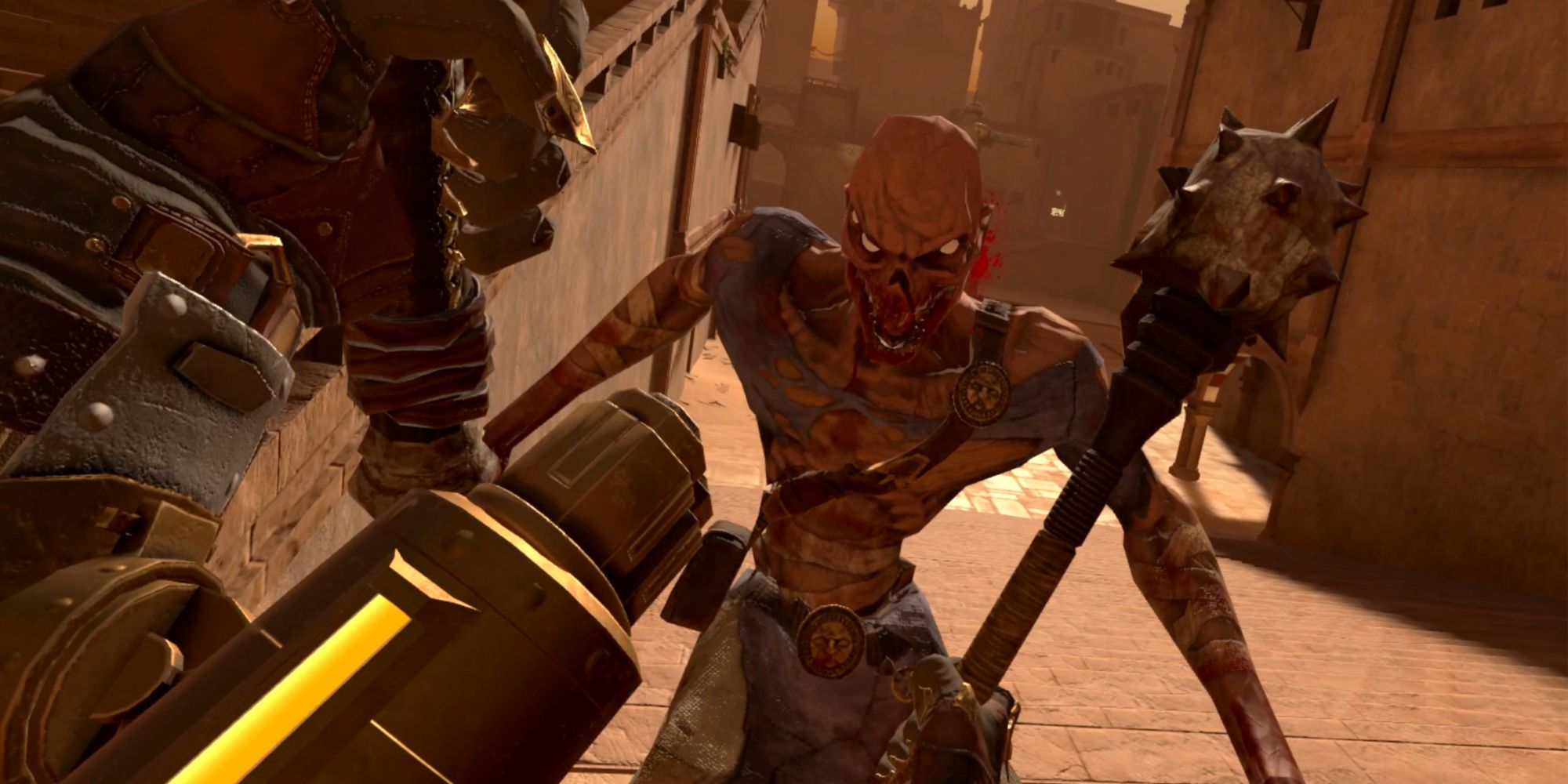 RB: Slightly worse for wear, we finally made our way over to the Everslaught Invasion booth. Very quickly, we knew we were in for an intense experience. Swordplay, gunplay, grappling hooks, enemy hordes – there’s a lot to learn if you want to get good at this one, and the short time we had allotted was, unfortunately, a bit too short. Being well-acquainted with action games in VR would have helped, but that wasn’t the case – I found the specific motions tied to some of the game’s important actions, such as healing and reloading, very difficult to use.

That said, I did come away extremely impressed. Everslaught’s weapon physics are stellar. The mace is a heavy, slow weapon, while the sword deals more damage when used to slice instead of bonk. The speed of your swing scales to the weapon you’re holding, and the gun attached to your left arm feels very natural to use. A huge amount of thought has obviously been put into this aspect.

Fighting back-to-back with another human being in VR games is an exhilarating experience and something I’m itching to get back to. When I took the helmet off, though, I felt exhausted. The fact that I’d just played three very different VR games within an hour definitely contributed, but Everslaught especially is a workout. There’s something in me that really wants to grab this game and replace Beat Saber as my main mode of gamified exercise.

GF: This is unfortunately the VR game that I have the least to say about, simply because after five minutes with it I felt like someone had chucked my brain in a washing machine and then punched me in the stomach. I guess two VR games do not a virtual reality expert make, because I didn’t even make it out of the tutorial before weakly taking my headset off and going for a sit-down.

I’ll echo Ryan’s thoughts and say that I was pretty impressed with everything that Everslaught Invasion had going on. It was one of the few full motion games at EGX and was ambitious with its combination of movement abilities like dashing and grapple hooks, alongside its sword combat.

Although admittedly, most of my nausea came from my inexperience with VR, it does feel like Everslaught might be a bit too fast-paced and ambitious for its own good, as I had a few of the same control problems as Ryan, just with a bit more dizziness mixed in.

You can wishlist Broken Edge on Steam, it has a slated release date of Autumn this year, We Are One is also on Steam and has a playable demo, and Everslaught will be coming to the Meta Quest in early 2023.