Mario + Rabbids Sparks of Hope's release date was revealed at yesterday's Nintendo Direct, having previously leaked ahead of the stream. That's in-keeping with the game's initial reveal last year, which also leaked a few hours ahead of time. The game arrives in October, and I'm sure it will be fine, if the last game is anything to go by. It has always struck me as a strange idea. It's a team up between Nintendo and Ubisoft, using Nintendo's best loved mascot and some fluff Ubisoft found down the sofa, in a completely new genre for both series, with gameplay that doesn't really suit Mario or Rabbids. And yet it all works. Sparks of Hope will also work, probably. Or maybe it won't. That's not really important here. What's important is that we need more games like it.

Mario is one of the most eclectic characters across gaming. While he's known primarily as a platform hero, he's also the star of the biggest selling kart racer of all time, the most popular party variety game in the world, and several of the best loved arcade sports titles. That's before you even get into the likes of Dr. Mario, Picross, and Smash, or the Mario-adjacent spin-offs like Luigi's Mansion, Yoshi's Island, and Captain Toad Treasure Tracker. Nintendo is far less protective of Mario than you might expect, handing over development of a lot of these to third-party studios. That's one ingredient in how Mario + Rabbids came together.

Rabbids themselves are much stranger than Mario. They began life out of necessity – when Rayman had a party game built around him, the developers realised Rayman needed some friends to party with. The Rabbids were invented to fill this void, essentially the Disgruntled Goat and Ku Klux Klam of Rayman. That's where their eccentric, screaming personality comes into it. All of the party games were high on adrenaline, and even the few that didn't need to be were highly chaotic, so it suited the Rabbids. A couple of cursory Rayman party sequels followed, but soon the Rabbids were able to throw off these shackles. 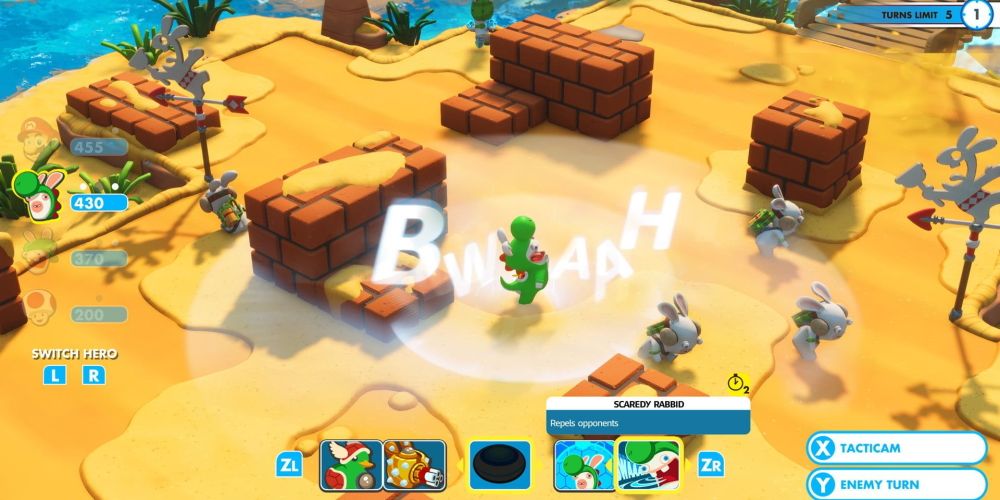 Like Minions off their nuts on cocaine, the shrieking Rabbids leapt out of the one-and-done purpose they were created for as part of the Raving Rabbids series. Party games were still the bread and butter of the creatures, but they were now very clearly their own thing, entirely distinct from Rayman. In fact, as Rayman got his groove back with the likes of Rayman Legends, the Rabbids were nowhere to be seen. Disgruntled Goat had stolen the show. Now a marketable asset in their own right, Rabbids even earned an audience with Mario, leading to Kingdom Battle. Quite why a team-up between a cartoonish platformer known for its party games, and a group of zany party mascots who originated in a platform spin-off led to a turn-based strategy adventure game I have no idea, but like I say, it works.

The ingredients here aren't that rare. Studios don't lend each other their mascots that often, but there are a lot of video game stars that have dabbled across genres. These days, studios pride themselves on emotional, narrative affairs, and it's unlikely we're going to see The Last of Us launch a party spin-off. I'm not even convinced it will launch its multiplayer spin-off, due out in 2020, now with no word on it coming until 2023. But away from the triple-A, games-as-art superstars, there should be a lot of opportunities for studios to work together to create something new. Why can't Pokemon have a side-scroller in the world of Final Fantasy 7? Why can't Leon Kennedy have a mash-up with Castlevania? Why can't Chun-Li team up with Faith in a Mirror's Edge spin-off?

I know I sound like one of those weird NFT shills with no knowledge of how gaming works, but I'm not asking to take my party from Pokemon and blockchain them into Streets of Rage, then cryptocurrency in my Bored Aperith or whatever the bullshit idea is. I don’t even mean like Fortnite, where it’s just skins skins skins and no real attempt to connect with the people inside them. I mean a game like Mario + Rabbids, where one team trusts another with their characters, and a new adventure for both parties is built from the ground up. We're no strangers to IP soup in gaming, with MultiVersus on the horizon, but Mario + Rabbids always felt more like a real partnership than a cheap cash-grab. It’s set the groundwork for future games of this ilk, and with any luck Sparks of Hope will be enough of a success to make people take notice.