Bardin's second unlockable Career is the Ironbreaker. This Career is Warhammer: Vermintide 2's resident tank class, allowing you to soak up blows and protect your party from damage. Ironbreak primarily plays at the front of the party, attacking waves of enemies head-on.

Although Ironbreaker focuses more on defense, the Career has excellent damage as well, making it an overall very strong role for Bardin. Let's take a look at each of the Ironbreaker's abilities, weapons and talents. 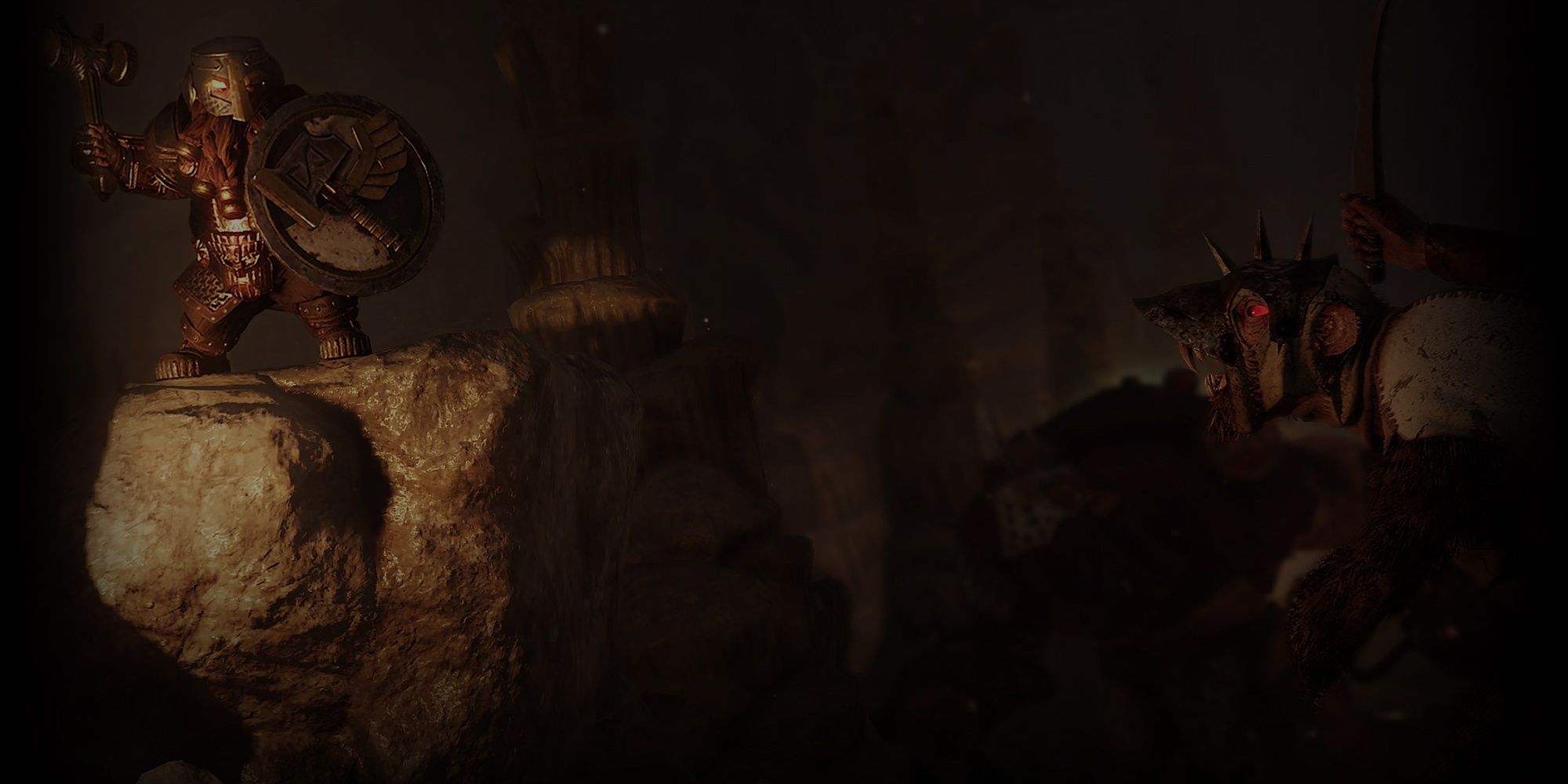 As mentioned above, the Ironbreaker's main goal is to block attacks to protect its team. By staying in front of your team, you will use your high stamina pool to block and parry incoming attacks, while your allies safely attack from behind. To do this effectively, you'll need to prioritize two things: stagger and stamina.

By repeatedly staggering the enemy, you will keep yourself alive for longer. While staggered, the enemy will not be able to attack, and you will also generate temporary health through your level five talent.

Secondly, managing your stamina shields is imperative to playing Ironbreaker. Blocking high-damage special and elite attacks and pushing back waves of enemies will eat up your stamina, so you'll need to know when to swing and when to block. 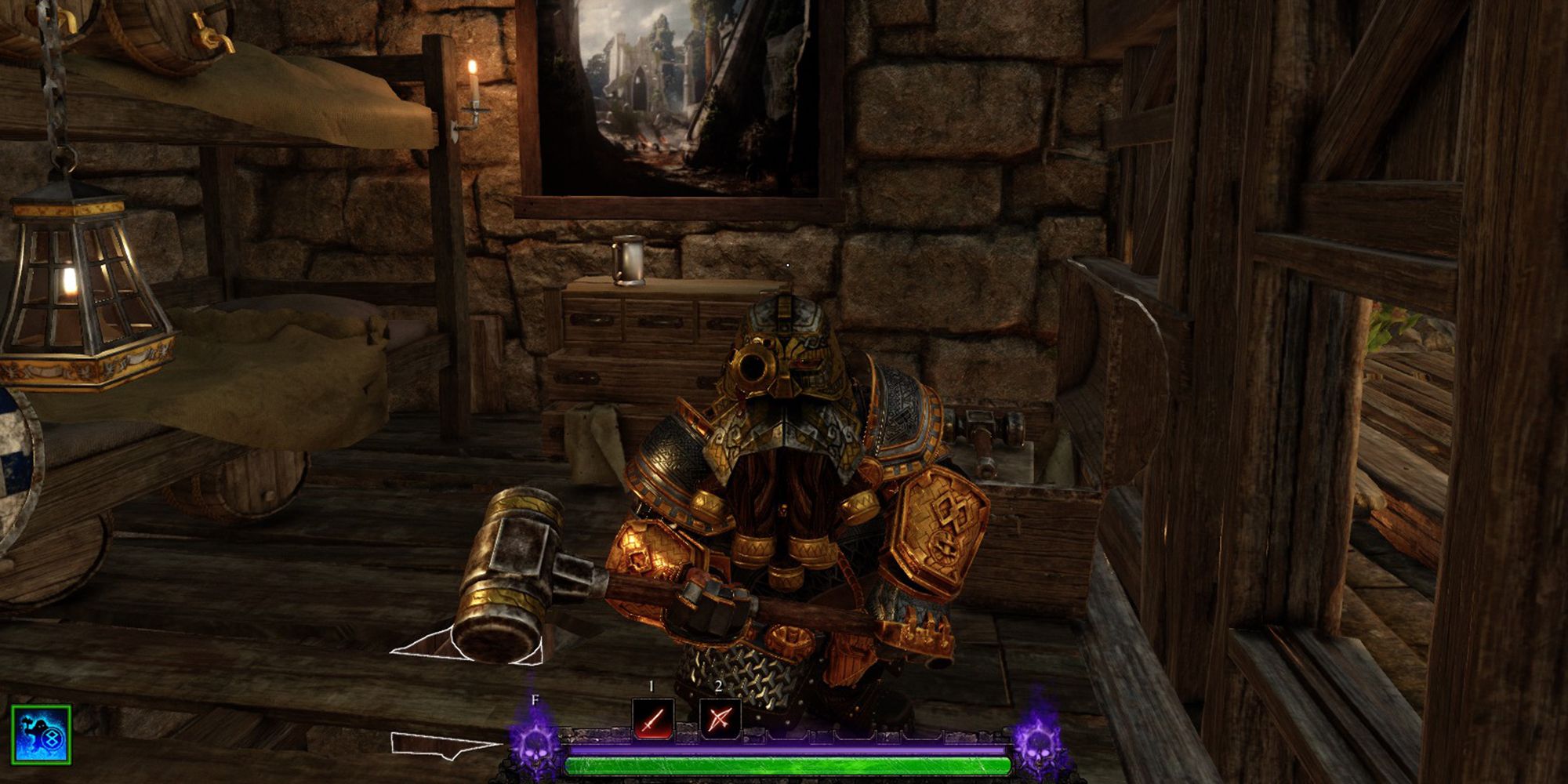 Due to the high staggering power of Bardin's Hammer weapons, these are the best choice for stagger-centric Ironbreaker builds. Paired with the level five talent Rock-Breaker, you can generate high amounts of temporary health while paving your way through enemy hordes.

Axe weapons are also good options, but don't work as well with Rock-Breaker. Grudge-Borne will work better with Axe-type weapons if you prefer this weapon type.

For ranged weapons, Bardin has the following options.

Ironbreaker has access to Drake Fire weapons, namely the Drakefire Pistols and Drakegun. These weapons have unlimited ammo, instead building overheat upon firing. Overheat will deplete over time, or it can be manually vented by pressing the reload button, at the cost of health. These weapons can provide a good ranged option without having to worry about ammo, allowing other allies to get ammo supply drops when they appear.

Although the Ironbreaker is primarily a melee-oriented career, utilizing a ranged weapon to deal with specials can be more beneficial than sitting in front of waves of enemies. Drake Fire weapons are good for this purpose, as they allow you to have an occasional ranged option without needing to watch your ammo supply.

For a more traditional ranged weapon, the Grudge-Raker is an exceptionally powerful shotgun that can one-shot most specials at close-range. 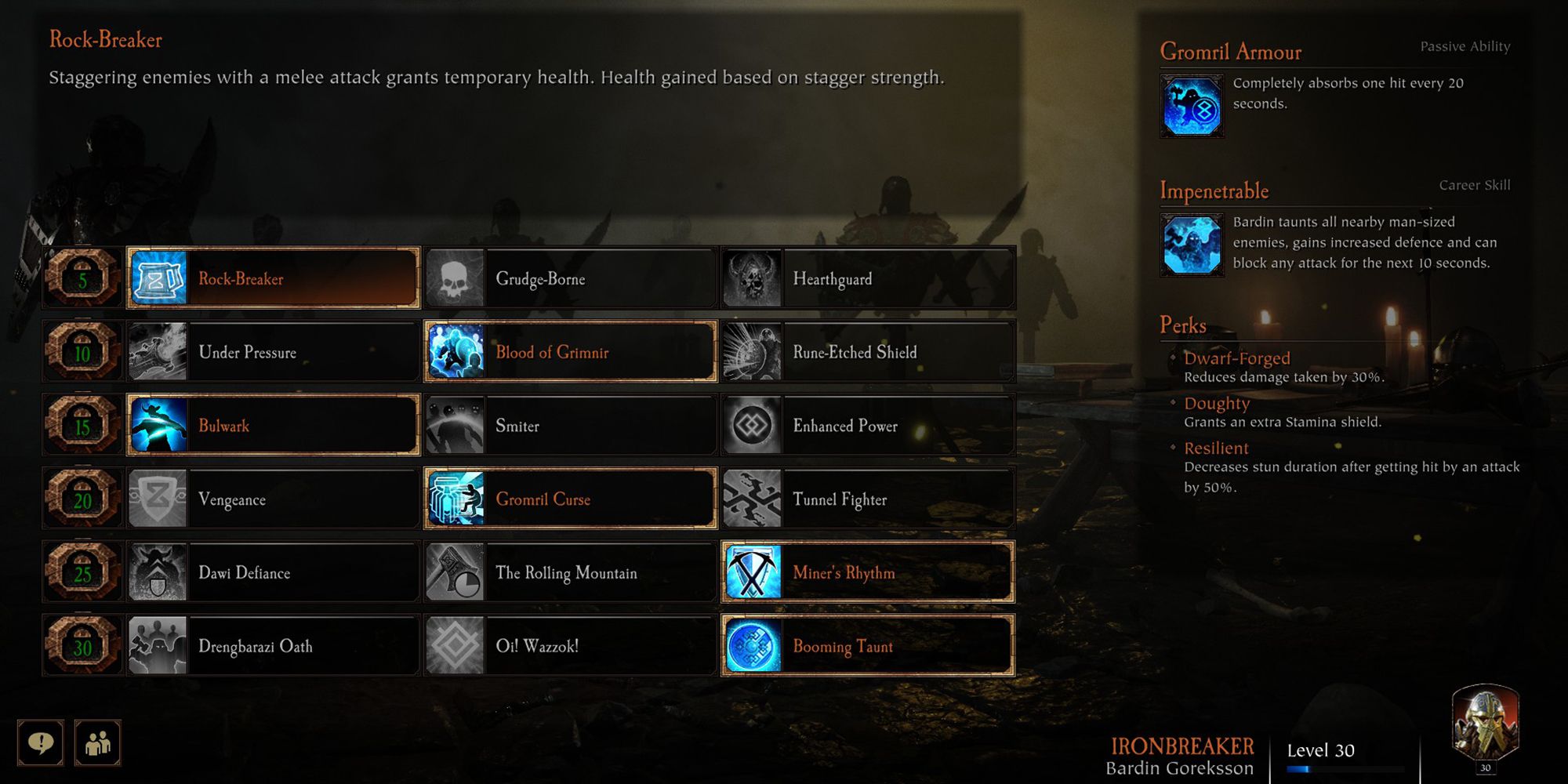 As Ironbreaker, you will want to be staggering enemies as much as possible to reduce the number of attacks they can perform. To that end, Rock-Breaker is highly effective, especially when paired with a high-stagger weapon like the Great Hammer. Normal and charged attacks with this weapon can generate a large amount of temporary health, as long as you are continuously staggering the enemy.

Blood of Grimnir is a powerful buff that gets better the more allies are near you. Ideally, you should be close to your allies in general, making Blood of Grimnir an incredibly strong flat 15% increase to your power.

Meanwhile, Rune-Etched Shield grants all allies up to ten percent increased power, conditional on the fact that you are constantly blocking attacks. This buff is a bit more situational than Blood of Grimnir, making it not as strong in most situations.

Under Pressure can be very strong if you are using a Drakegun or Drakefire pistols, but is useless if you are not.

Bulwark works best when used with high-stagger shield weapons, allowing you to increase the damage your team deals to the enemy. Alternatively, Smiter grants a 20 percent damage increase on the first enemy you hit, letting you kill them faster. Ultimately, whether you choose Bulwark or Smiter depends on the weapon you are using.

Enhanced Power provides a flat power increase that is useful across a variety of scenarios and is especially good in lower-level content where staggering isn't as necessary for survival.

Vengeance provides a very powerful attack speed buff when the Ironbreaker's passive Gromril Armour is removed. If you are able to avoid getting hit every minute or so, your Rising Anger stacks will provide a massive boost to attack speed. However, if you are getting hit more often, this passive becomes much less effective.

Gromril Curse may seem weak at first, but the knockback upon losing Gromril Armour is enough to stagger all types of enemies. This means that, provided Gromril Armour is up, you can stagger a Hookrat or Assassin rat, saving yourself from their ambush.

Tunnel Fighter can be useful if you find yourself being hit more often, but should be used less often in higher-level content as you block attacks manually.

For your level 25 talent, you'll essentially be deciding between The Rolling Mountain and Miner's Rhythm. The Rolling Mountain will allow you to build your Career skill more quicky, but only if you aren't using your stamina to block and push. With this condition, this talent becomes much less attractive.

Miner's Rhythm, on the other hand, plays to the strengths of Ironbreaker, allowing you to regenerate more stamina by weaving charged attacks into your melee rotation. Using a charged attack after every two or three swings will make this talent efficiently restore your stamina, allowing you to block incoming attacks more frequently, which is exactly what Ironbreaker is all about.

Ironbreaker's final talent is a difficult choice, as they are all solid options. Ultimately, the talent you choose here depends on how you want to play Ironbreaker.

Drengbarazi Oath provides a very high damage boost to all nearby allies for the duration of Impenetrable. With this talent, you will be relying more on your allies to clear waves while you block attacks.

Oi! Wazzok! can be incredibly useful in certain situations, as it allows you to force monsters to attack you instead of your allies for the duration of Impenetrable. Paired with the infinite blocking stamina provided by Impenetrable, you can keep the monster focused on you for ten seconds, letting your allies hack away at its back. However, in all other situations, when not fighting a monster, this talent does nothing.

Booming Taunt pairs most well with your goal as Ironbreaker, to taunt hordes of enemies and block their attacks. A simple increase to the radius and duration of Impenetrable is very strong, allowing you to do what you do best for longer.