The Warhammer universe has been a favourite for tactical gamers for decades, with the original tabletop game converting perfectly onto PC and now mobile gaming platforms. Warhammer 40K Tacticus concentrates on small-scale tactical battles, using around five units per battle to try and conquer your foes.

Warhammer 40K Tacticus covers many of the factions found in the expanded sci-fi universe, from the ‘good guy’ Ultramarines and Adepta Sororitas, the Black Legion and Templars, through to the Orks and Xenos. There are more than 40 playable characters, with more being introduced regularly. With both PvP and PvE battles across a wide range of scenarios, it can all be pretty overwhelming. So if you’re new to the game, you’ll find plenty of beginner’s tips and tricks to help you out below. 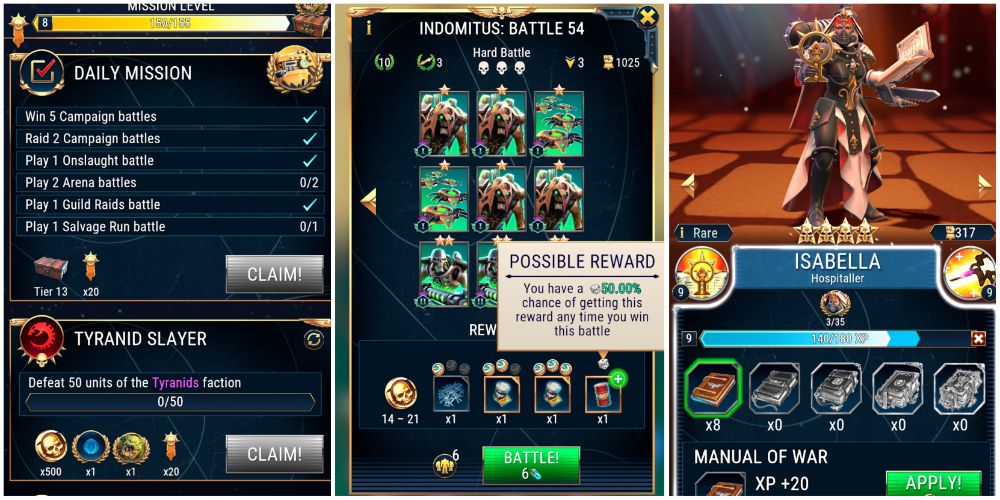 Warhammer 40K Tacticus can seem daunting at first. There are so many menus, stats, and items. But almost everything is clickable, giving you lots of snippets of important information. It’s not only the ‘i’ icons. All items, tokens, skills, stats, and rarity stars are clickable.

For example, if you need a particular item to advance a hero, clicking it will show you where it is available. There will usually be a particular Campaign level you can repeat to get that item. When you go to it, if you click the dice icon before starting the battle; it will show you the percentage chance the item will drop.

Also, the green glow is your friend. After each battle, look for a green circle on the ‘Character’ icon at the bottom of the home screen. This means you’ve found an item you can equip. However, the number can be misleading. It isn’t the number of items you have, but the number of character slots you have equippable items for.

So, if you have one item that can go on four different characters it will show a four, not a one. Luckily, when you go to equip an item, it will show you who it can be equipped to — so choose wisely. You’ll also see it on the ‘+’ icon of the experience bar if you’ve found any War Books. These can be used to level up any of your heroes, so use them carefully. 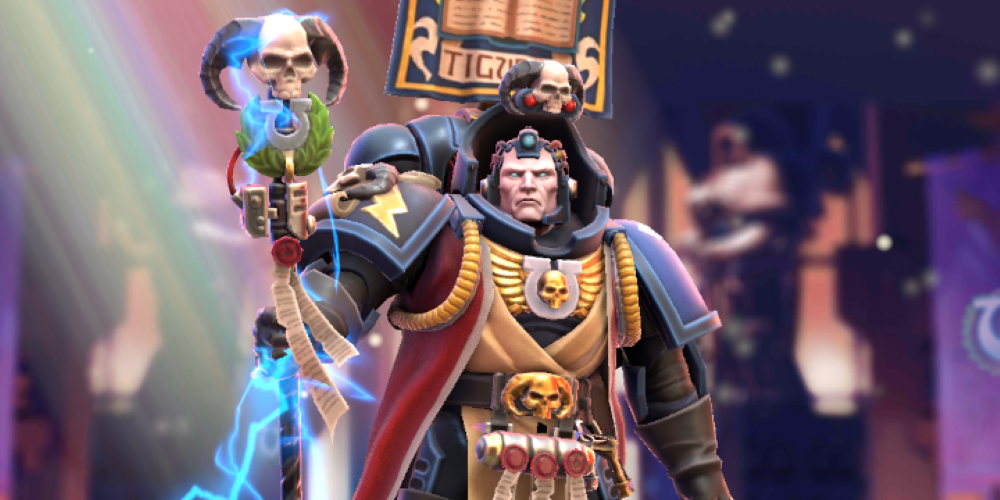 Each character can be improved in three main ways:

Rank Shards and Equipment can be attained from specific Campaign levels (click the shard or item to see which). Shards, Equipment, and Orbs are also found in shops and as battle rewards, as well as randomly in a variety of crates, shops, and battles.

Also, note that many loot crates give higher rewards depending on your level. So, if you have one available and are close to levelling up, go get your level before opening the crate.

Shopping, Guilds, And The Gacha System 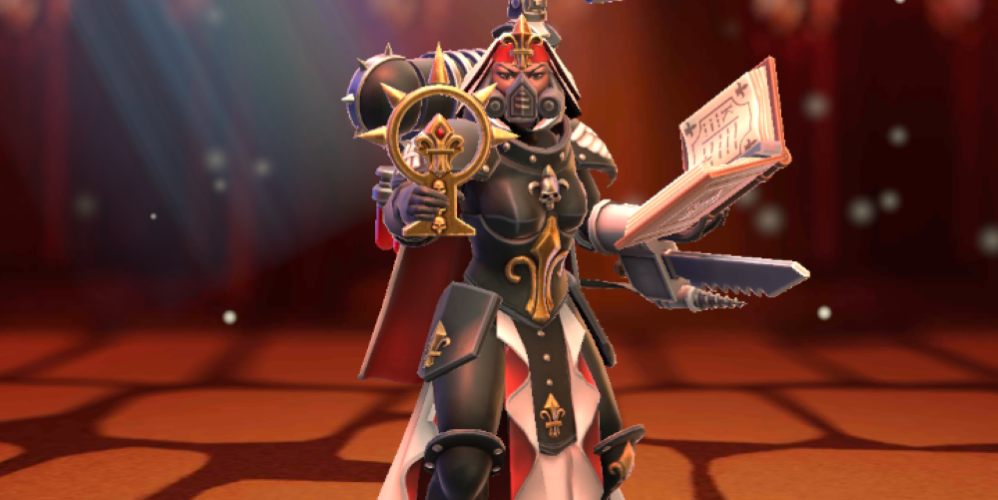 The main gacha system in Warhammer 40K Tacticus is Requisition Drops. You can get a single Requisition Drop by spending either one Requisition Scroll or 300 Blackstones. Each Drop gives random resources, including shards and orbs.

But if you get really lucky, you can get a whole new random Character. This is awesome, as the rarer characters cost up to 500 Character Shards to open — and they’re hard to come by. If you wait until you can do a 10-pull (10 Scrolls, or 3,000 Blackstones), you instead get a guaranteed Character — which is a big deal.

Both Requisition Scrolls and Blackstones are plentiful early on, but soon become rare. So, in those early levels, try to resist the temptation to spend them when you get them and save up for the 10-pulls.

The shop has one free daily item, plus one or more items that cost Coins, the game’s most common currency. You may not need the item now, but these items are always worth picking up as they are bound to be useful later.

Also, you can watch several ads each day to refresh the offering after you’ve bought the items you want (there’s an icon just above the ‘free’ item). You won’t get another free item, but you will get two more items you can buy with Coins.

One of the daily offerings will be ‘X’ number of Requisition Scrolls for ‘X’ amount of Blackstones. The number varies but will work out at 300 Blackstones per scroll. This can be very useful if you’re saving up for a 10-pull and are closer with Scrolls than Blackstones, as it is a direct and fair conversion.

Why Join A Guild?

There are two main reasons to join a Guild in Warhammer 40K Tacticus, alongside the camaraderie of chatting with your fellow players: 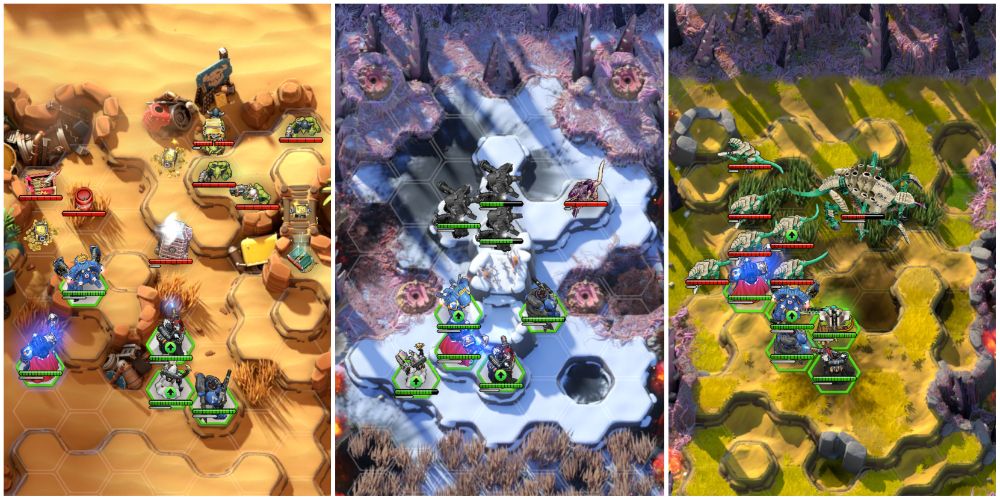 If you want to keep levelling up efficiently, you need to understand the Challenges tab more than any other. To find it, click the ‘home’ button (middle bottom of the screen), then the icon that looks like a scroll on the right of the five icons in the centre of the home screen. Here, you’ll find all your current missions, daily or otherwise, along with the rewards you’ll get for achieving them.

There is always a Daily Mission here, which requires you to do a bit of all the game’s content types: Campaign, Onslaught, and Arena battles, alongside Guild Raids and Salvage Runs. Completing this gives you Mission XP, which helps you level up, alongside a Regular Crate which will improve with your level.

You’ll also have two Daily Missions and possibly a Timed Mission. Keep an eye on timed ones, as once you’ve logged in, a real-time timer will start. If you don’t complete it before it runs out, the opportunity will be gone. The daily missions vary, and if you don’t like the look of them, they can be changed once per day (click the circle just right of the quest's title).