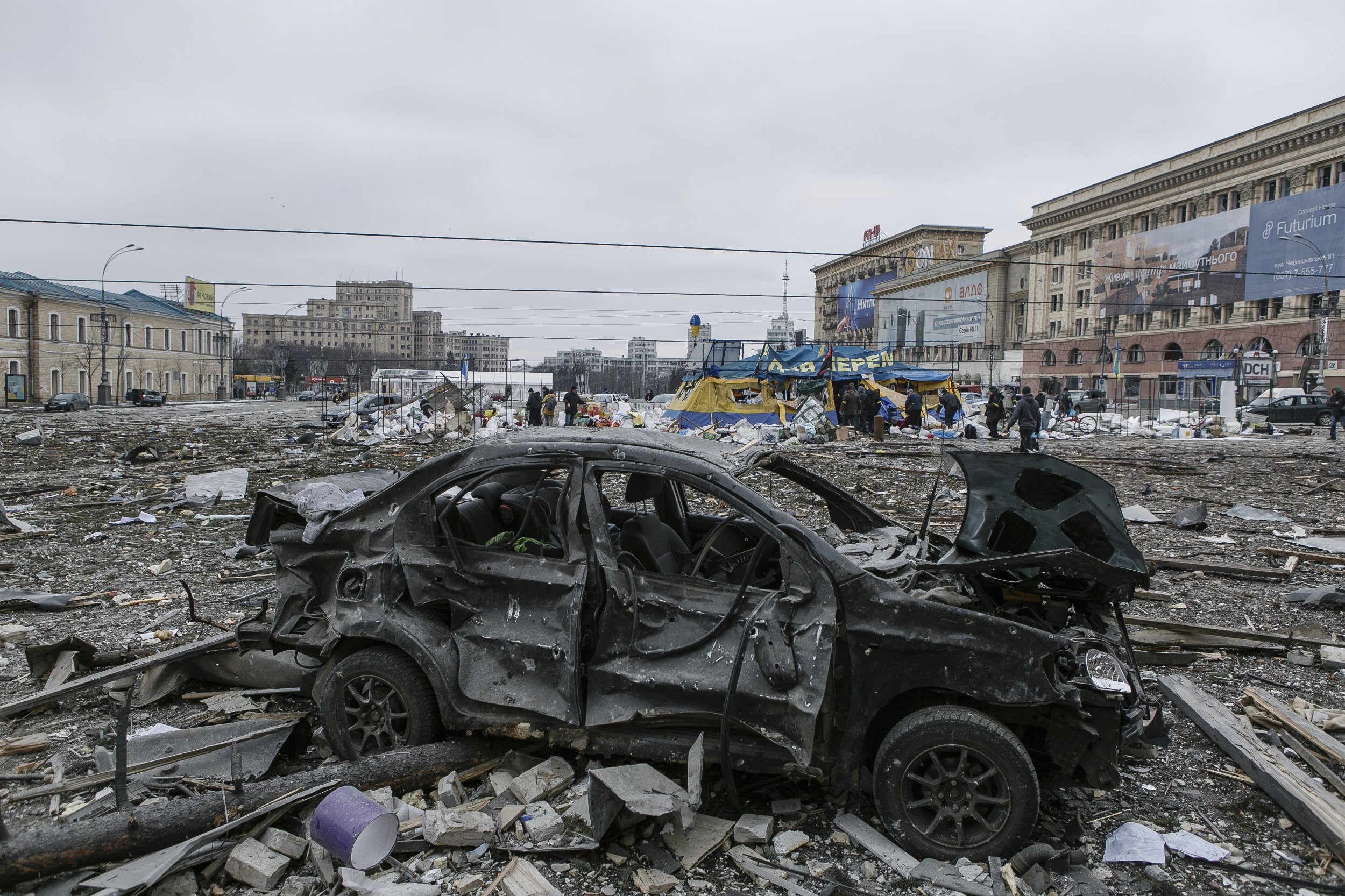 A video game developer in Ukraine describes how ordinary lives have been turned upside down by the war, while insisting that even without military experience he’ll do whatever it takes to help his country.

At a time when hundreds of thousands of Ukrainians have been displaced due to Russian president Vladimir Putin’s attack on their nation, indie developer Oleksandr Molodkin is safe at home in his flat in Kyiv. Although he and his partner – in both senses of the word – Tay Kuznetsova have to stay in the hallway for cover, taking turns to sleep so that someone is always awake and able to react to whatever new twist the Russian invasion of their country brings.

We spoke to Oleksandr (‘Alex’ is fine, he says before there’s a chance to stumble over his name) over Zoom, ostensibly to talk about Puzzles For Clef, the new game from his two-person development studio Weasel Token, who previously released mobile puzzle game Vitrail. As you might imagine though, he was far more preoccupied with the perils of his fellow citizens and extoling the virtues of Ukraine’s already legendary defenders.

Logging into Zoom on Thursday night, the image that was presented, on a surprisingly clear internet connection, is of Molodkin sitting in front of a non-descript wall, a stern countenance upon his thirtysomething face but otherwise looking like any ordinary game developer about to discuss their game. ‘We are fine here,’ he says in reply to the first and most obvious question.

‘We have food and water, even some grocery stores are still open. We have to make sure one of us is awake at night but at the moment [around 10pm Kyiv time] it seems quiet. But you never know what is going to happen,’ he adds.

Kuznetsova at least could have attempted to flee – Molodkin implies that the evacuation trains are more accessible than some Western media suggests – but they have stayed, even though they’ve not yet claimed any weapons from the Ukrainian government. ‘I am not a soldier, I would not be of any use in a battle,’ says Molodkin. ‘But if the situation becomes worse, if the city is invaded, then, yes, I will take up arms to defend my country.’

‘We are very proud of our Ukrainian heroes, but I am not sure I could be one of them,’ he muses. ‘But we have been given no choice and I am certain that we will have victory eventually.’

His rhetoric is remarkably similar to that of other Ukrainians, who the world has been watching on television and YouTube, each apparently possessed of an absolute conviction that Ukraine will eventually be victorious, despite the incredible odds.

Asked whether the refrain Glory to Ukraine! (Slava Ukraini!) is a new invention or an older reference he explains that it dates back to the original Ukrainian War of Independence from the early 20th century. ‘You hear it a lot more now though,’ admits Molodkin.

I am not a soldier, I would not be of any use in a battle – but if the situation becomes worse, then yes, I will take up arms to defend my country.

It becomes clear that he must be watching much of the same news coverage as those in the UK and elsewhere and when asked how he feels about foreign media’s coverage of the conflict he seems generally satisfied. ‘It’s obvious that many do not know Ukraine well but there has been nothing very wrong that I have seen. There is a lot of Russian propaganda but that is aimed at us and their own people.’

‘We are very grateful for everyone that has given their support and I would say that all Ukrainians know of it,’ he says when asked whether the near-universal support around the world is common knowledge. ‘We need your help though. You might not be able to come and fight with us, but you can still help us with weapons and aid.’

Broaching the difficult subject of no-fly zones, Molodkin is pragmatic about the reasons other countries have refused to enforce it. ‘I understand, of course. It could mean war for everyone but if you will not enforce it then send us the planes and the missiles and we will do it ourselves.’

When it comes to Ukrainian President Volodymyr Zelensky, Molodkin is more than happy with his performance. ‘He has been a hero, he has been the leader we need,’ he says while insisting that, while largely unknown to the world before now, he was always a popular figure in Ukraine – despite his unorthodox history. ‘He got 70% of the vote’, says Molodkin. ‘I voted for him.’

‘He was a comedian before, but you could trust him. To be a comedian takes a quick wit and he is very clever, very honest. He has surrounded himself with experienced politicians and they have not fled either.’ he adds. ‘That’s not something you would necessarily expect of all world leaders.’

The subsequent reply of ‘I wouldn’t of mine’ is, for the first time, received with a grunt of amusement, which is strangely reassuring. ‘I think, from a British perspective, the most unusual thing about him is that he’s not constantly lying,’ is the follow-up, which gets a more protracted chortle.

When the conversation turns to Russian protests though, Moldokin is relatively dismissive, even when asked about footage of protestors being dragged away by police. ‘The problem is it is not enough. With a country the size of Russia thousands of protestors is nothing, it needs to be many more for there to be any effect.’

Watching the trailer for Puzzles For Clef reveals a whimsical puzzle adventure with fairytale visuals. It’s not a war simulator or anything close to it, and yet its creators are already caught up in the real thing and unwilling to leave their home or their city despite the very real dangers. Some analysts call Russia’s victory inevitable but it’s clear that most other Ukrainians feel the opposite.

‘We will be victorious, there is no doubt,’ says Moldokin. ‘Our Ukrainian heroes are already having victories and now the whole world is against Russia. We don’t want to fight, I don’t want to fight, but we will. What else can you do? Run and hide and let your country disappear?’

‘If things go well this will end and we will be able to release our game eventually. If not? I do not think the world will forget us now.’

If you want to donate to charities in Ukraine the National Bank of Ukraine has set up a special aid account that can be used from any country.

Alternatively, a separate charity fund allows you to make donations directly to the Ukrainian Army.

Russia-Ukraine war: Everything you need to know

Russia’s invasion of Ukraine has entered its ninth day, with the attacks beginning on February 24.

Since then, Ukraine has suffered widespread damages and loss of life amid Russia’s major bombing campaign.

More than a million people have fled Ukraine to neighbouring countries, amounting to 2% of the entire population.

In a chilling call with French President Emmanuel Macron on Thursday, Russian President Vladimir Putin warned that the ‘worst is yet to come’.

Follow Metro.co.uk’s live blog for rolling coverage of conflict as it happens.