Vengeful Guardian: Moonrider's Asura's Fleet will see you soaring through the air, precariously bouncing from one flying vessel to another. This is a stage that perfectly blends combat with platforming. You will be shuffling along a traitorous railing at one point, and then locking horns with a giant, cybernetic sumo wrestler the next.

But this stage isn't just its inventive platforming section a nice thrilling selection of mid-bosses. It also has some of the best hidden Upgrade Chips in the entire game. But, of course, we can guide you directly to them, so you don't have to worry about missing a thing. 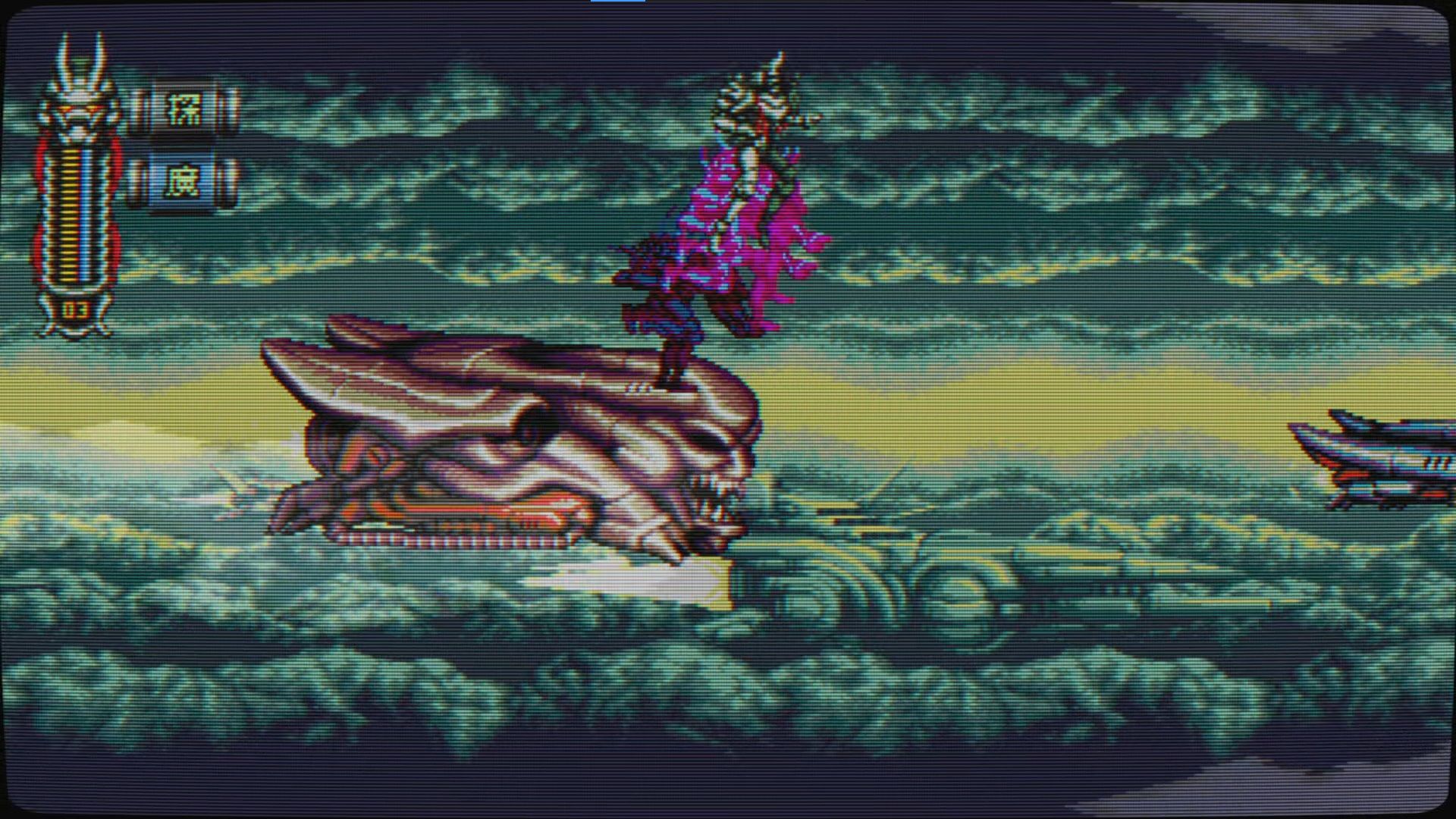 This stage starts off with a little platforming. You will be hopping from ship to ship. Ideally, you want to avoid falling here (duh), but if you do slip up, don't worry, it isn't a big deal; you just lose a small amount of health. Proceed to the right while sprinting; you will be able to make every jump. Eventually, you will climb a rail that is under a giant warship. During this section, you will need to weave through the flames of the boost thrusters. If you time it just right, you shouldn't need to stop. 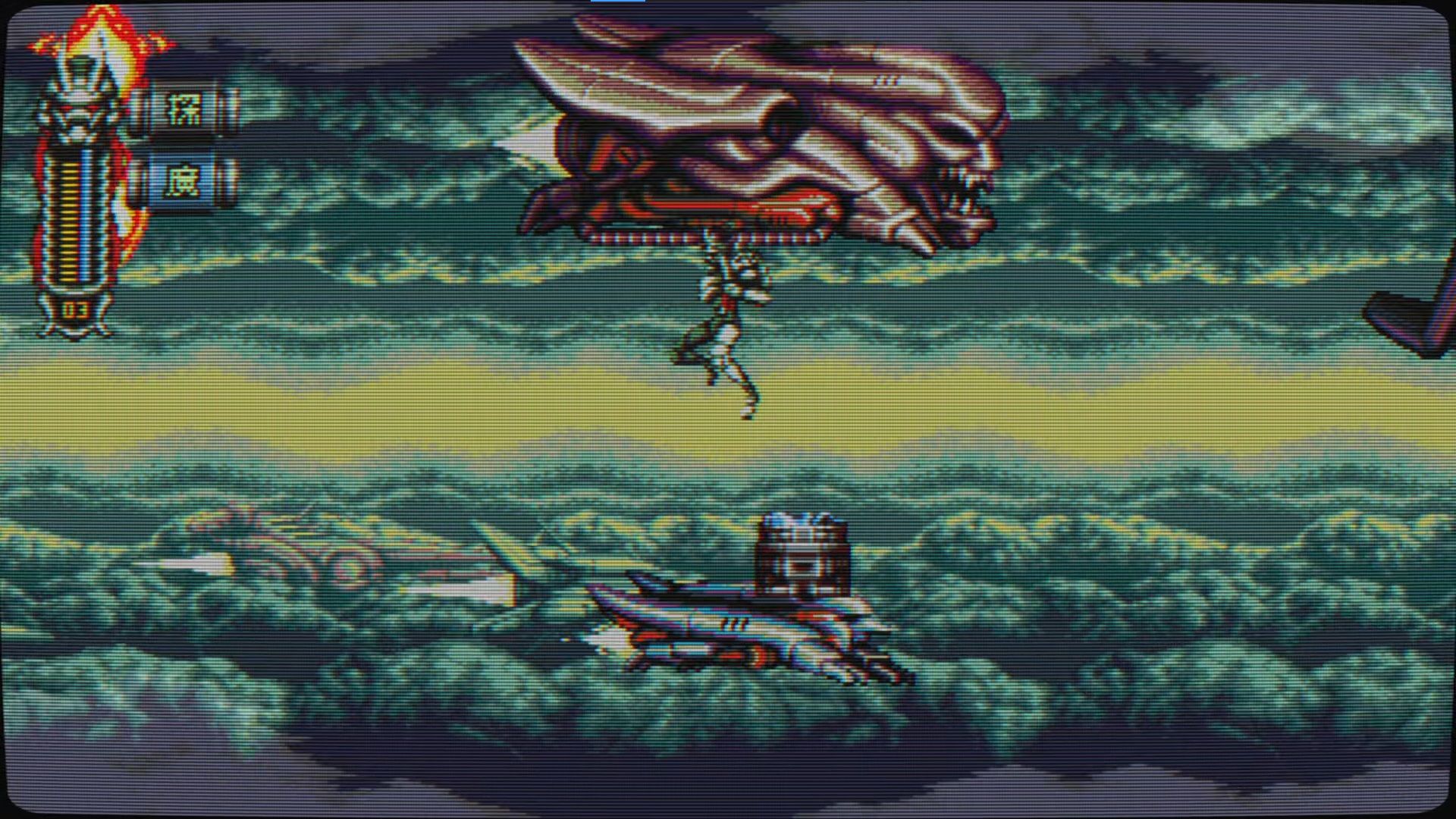 After you hop down from the underside of that warship, the next vehicle you land on is just above the hidden Upgrade Chip. Drop down, and you will be able to claim it for yourself. 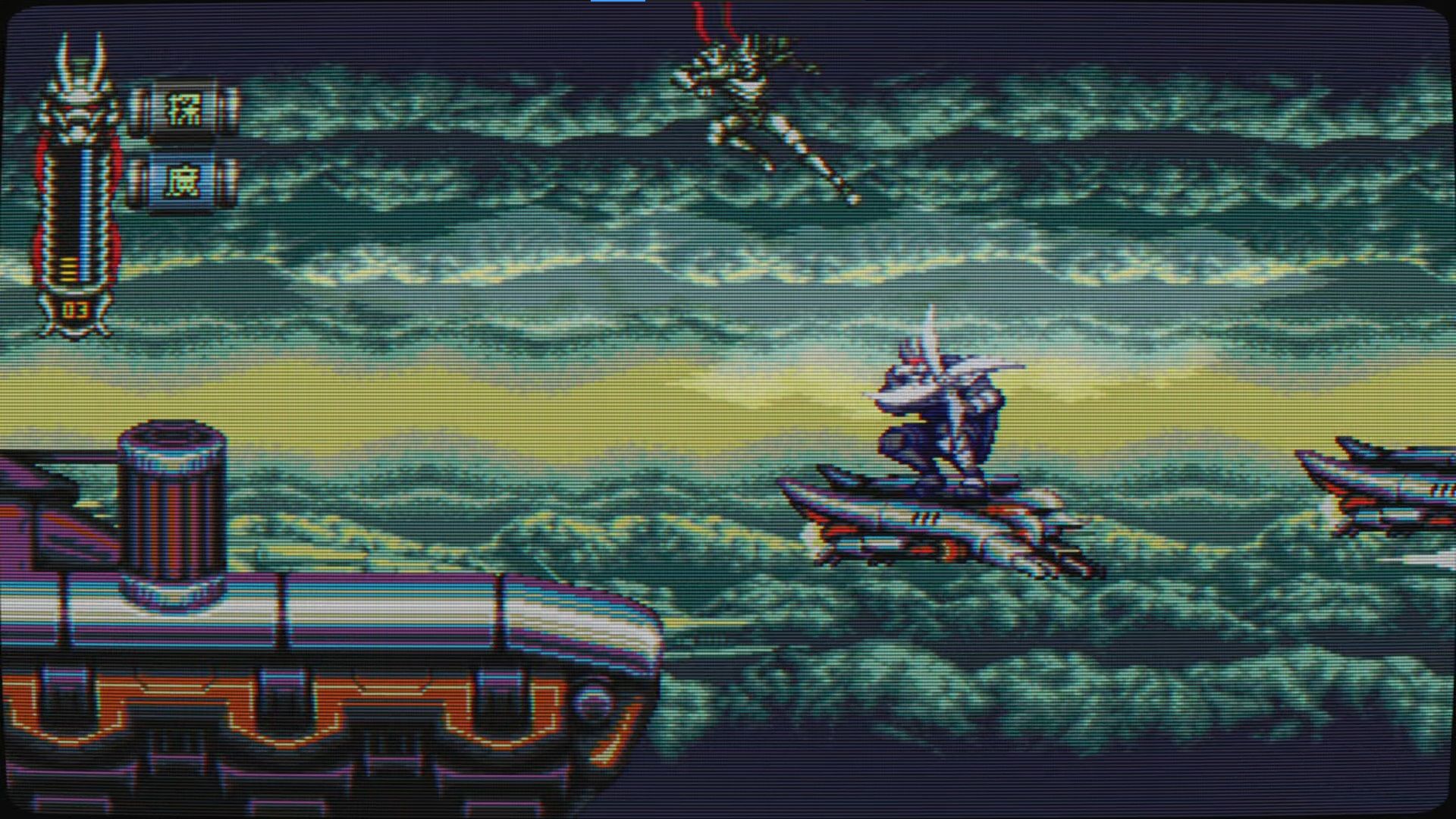 After claiming the Upgrade Chip, climb up the shaft on your right. You will now need to battle through a number of enemies. There is a new type of aerial drone here. This one doesn't shoot, it swoops down. It can be taken out with a single Dive Kick or a few swipes of your sword. You will also need to contend with a Shuriken-Wielding Soldier. Like the Shield Soldiers, these guys are invincible until they attack. They can also be taken out with a single Dive Kick. 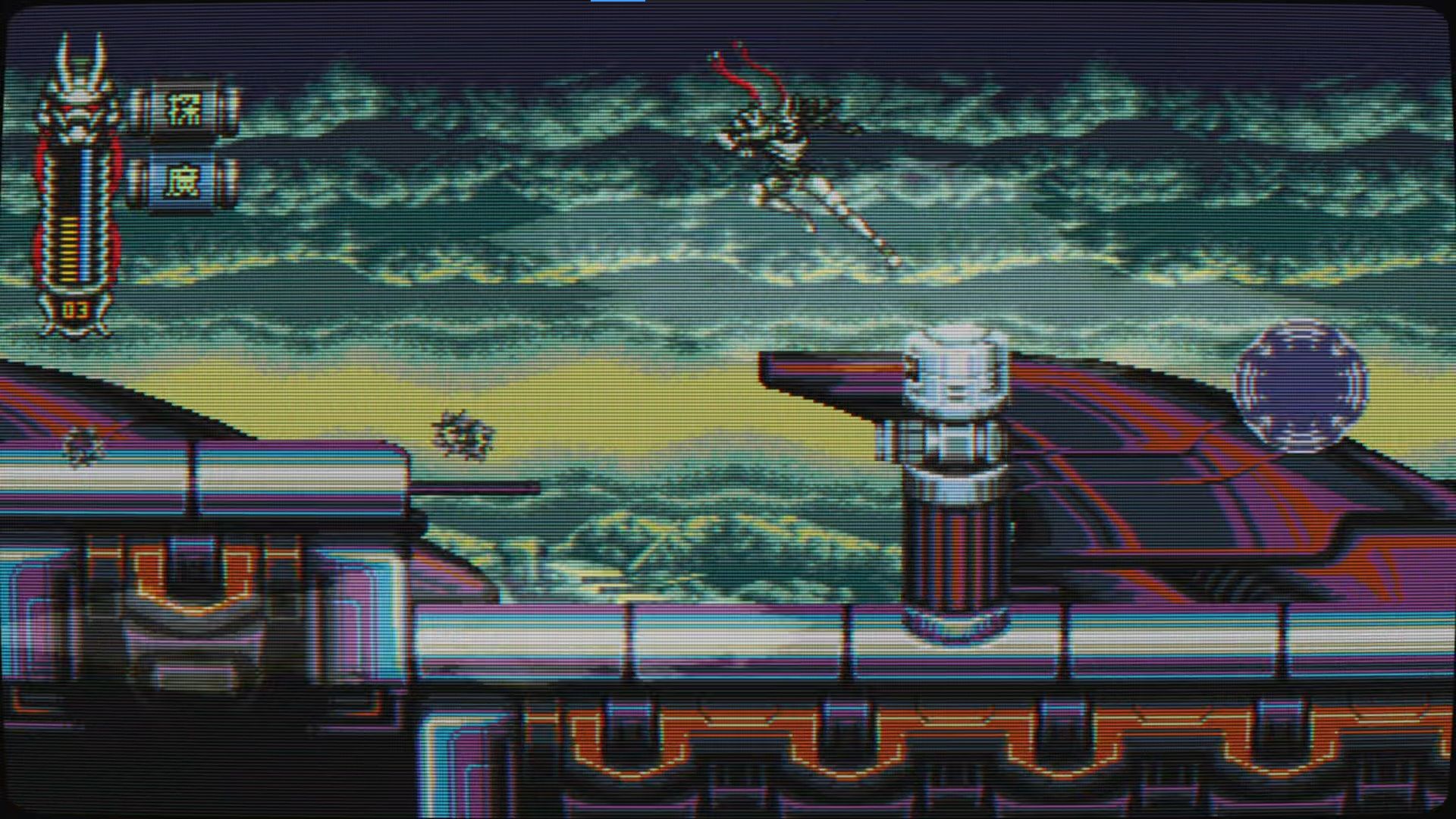 Lastly, there is a Gatling Gun Turret. These suckers are able to turn around, but they can only fire left or right, so a few Dive Kicks will keep you safe while taking them out. Needless to say, you will be doing a lot of Dive Kicking! 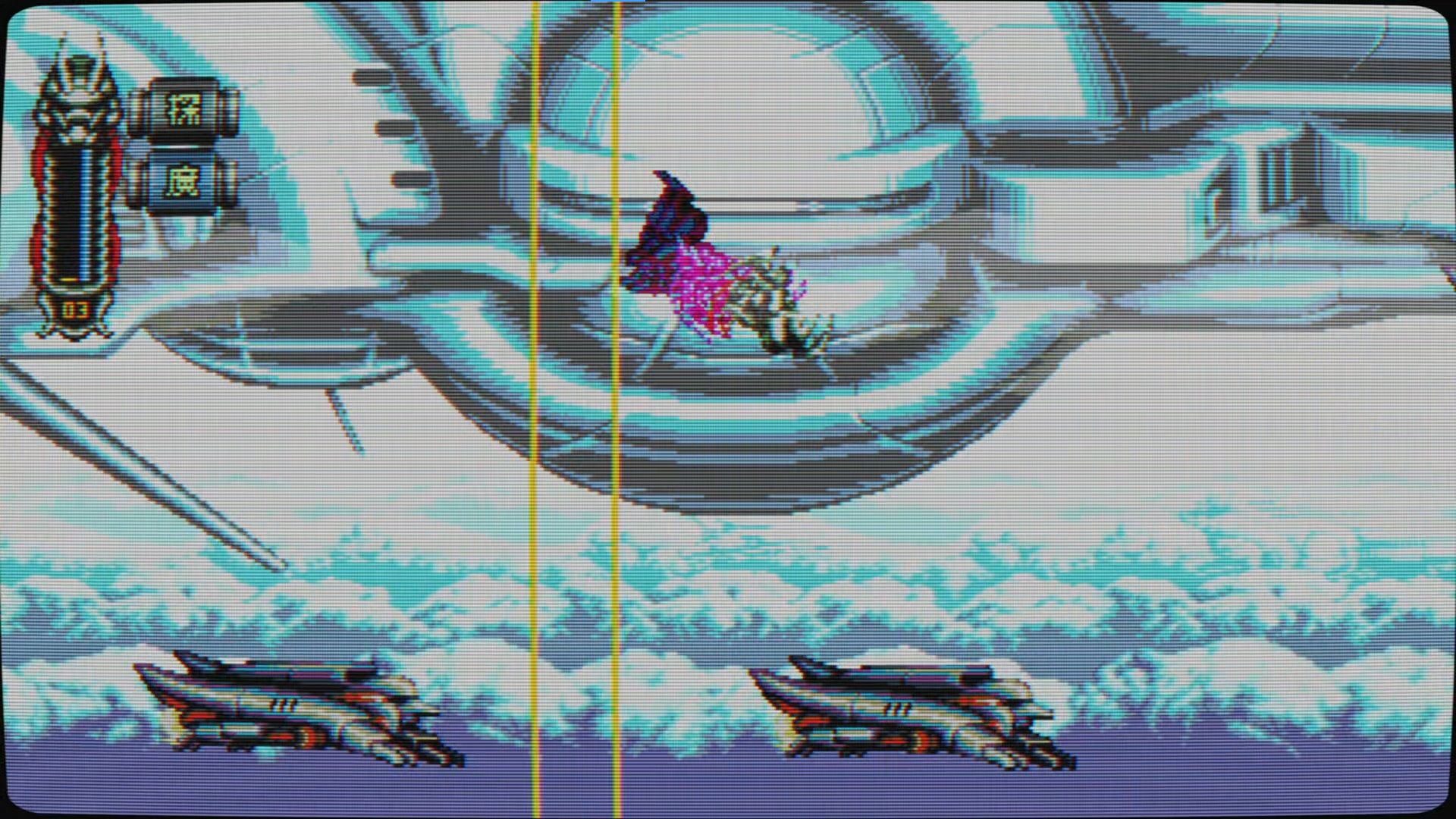 After you work your way through a couple of troops, you will spend some time platforming. Suddenly, a warship will appear in the background and start firing a Death Beam down on you. When this starts happening, don't dawdle. Just sprint to the right. Don't bother to stop and fight enemies, the Death Beam will take care of them. Thankfully, as long as you run to the right, it will never pose a threat to you. 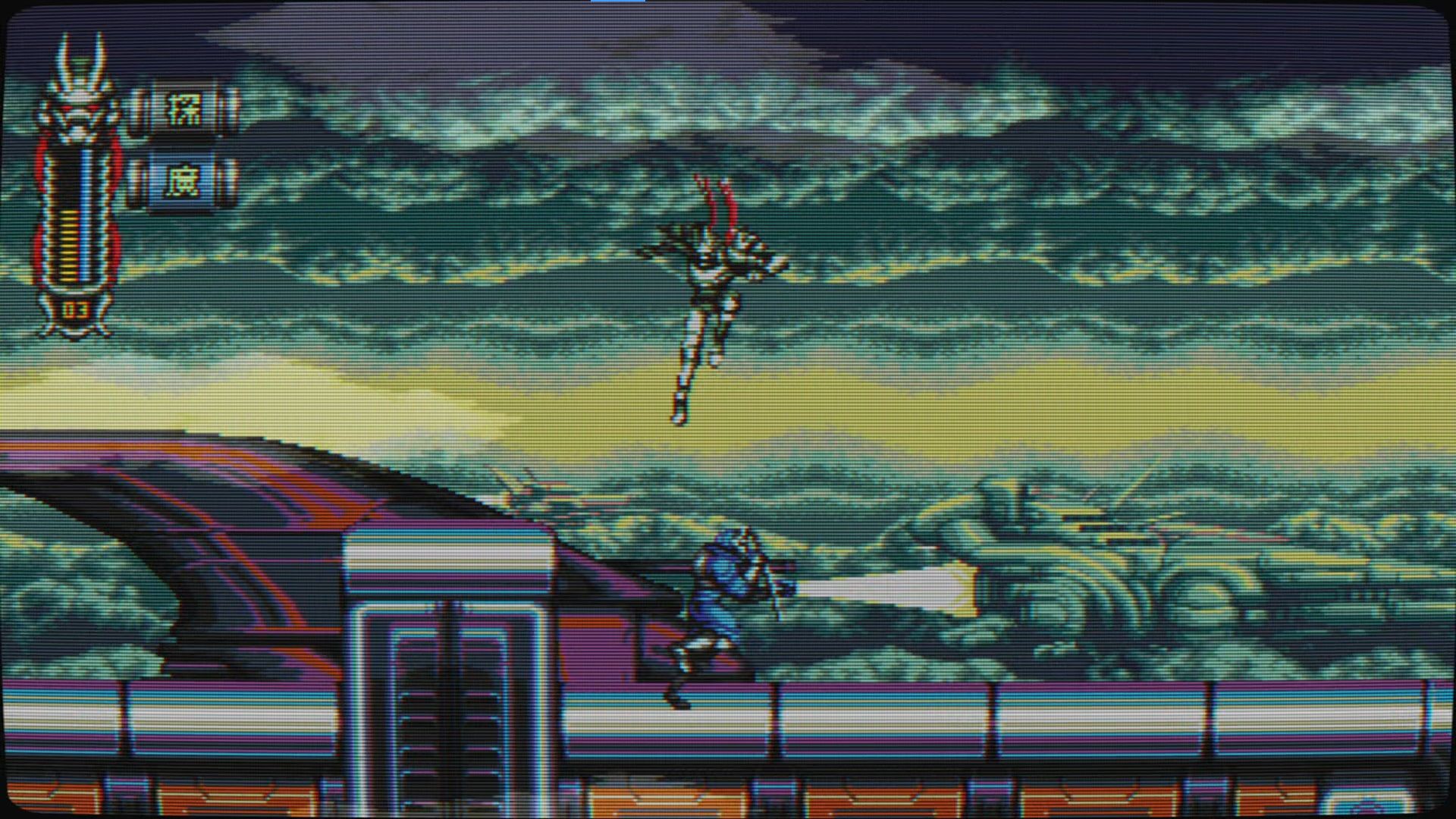 Once you escape the Death Beam, you will be back on the surface of a large ship. Here you will fight against some Ninja. These Ninja can throw kunai at you, have a charging attack, and can teleport. However, they also die to a single Dash Attack, so they can still be taken out quickly if you get on them. 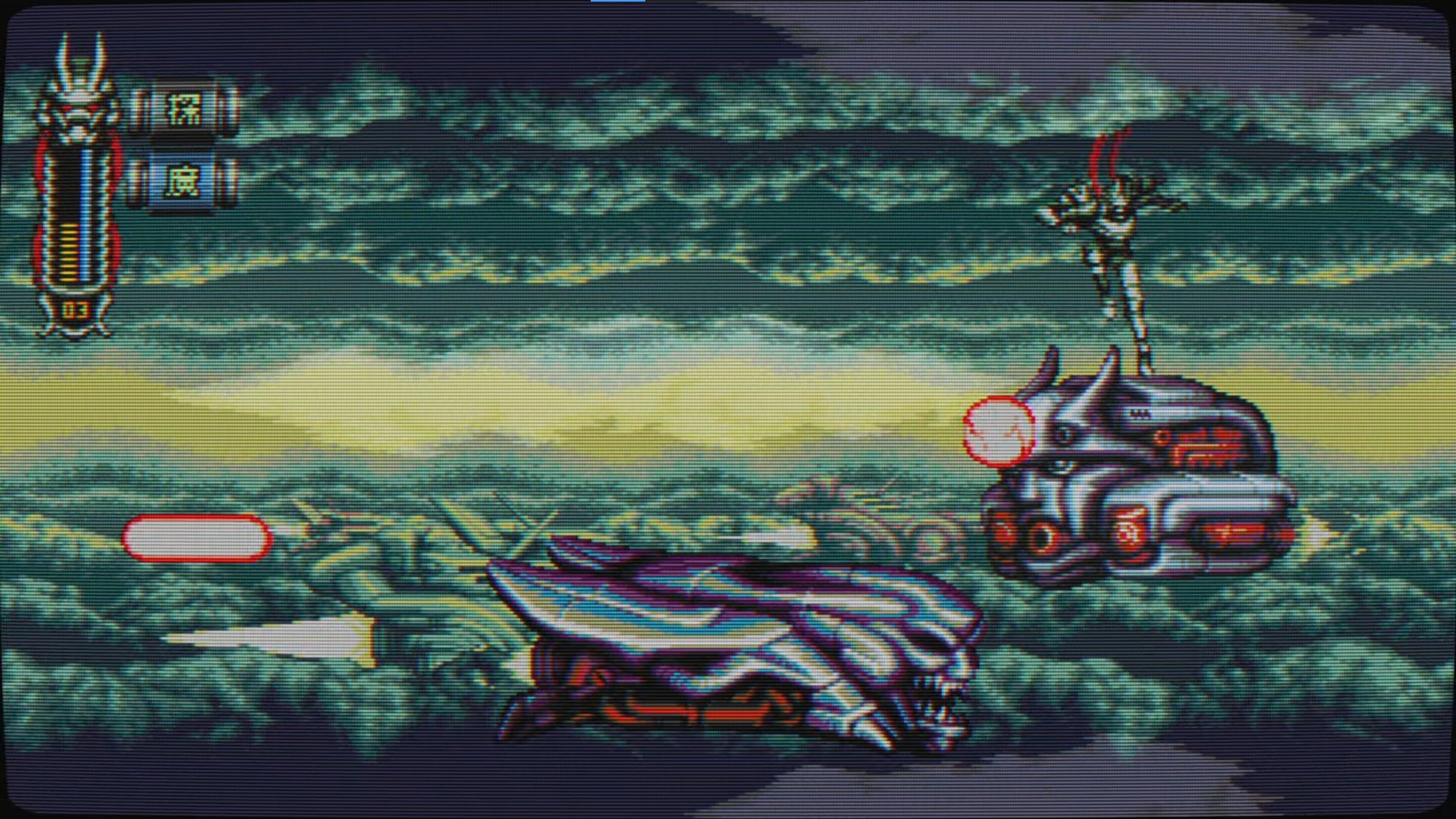 After fighting some Ninja, you will fight a Mini-Boss. This ship fires lasers from its mouth which travel straight across the screen, and lasers from its forehead, which quasi-track. However, if you just pounce on her head, she will rarely (if ever) be able to hit you. Even her tracking laser doesn't quite seem up to the task. After you put this robot down, you will fight a few more Shuriken-Wielding Soldiers and Ninja. You will then jump down a shaft and face the real boss of the level. 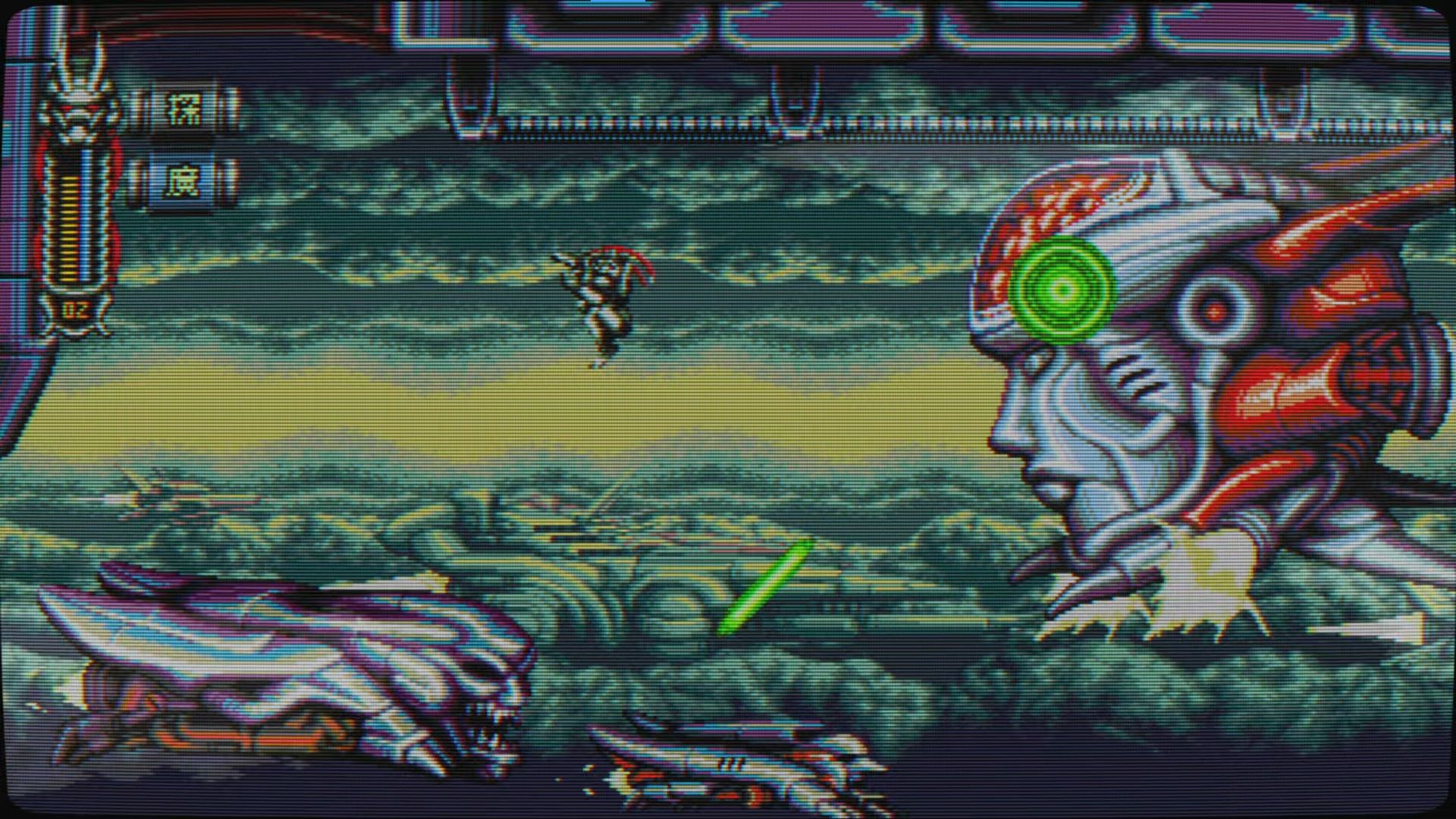 In order to get to this giant, floating head, you are either going to need to approach from the railing up above, or the platform down below. We recommend that you always approach from the rail first. When a green glowing circle appears on her temple, she is going to fire a barrage of projectiles. So drop down to the platform below the second that glowing circle appears. It will be much easier to dodge them all down here. 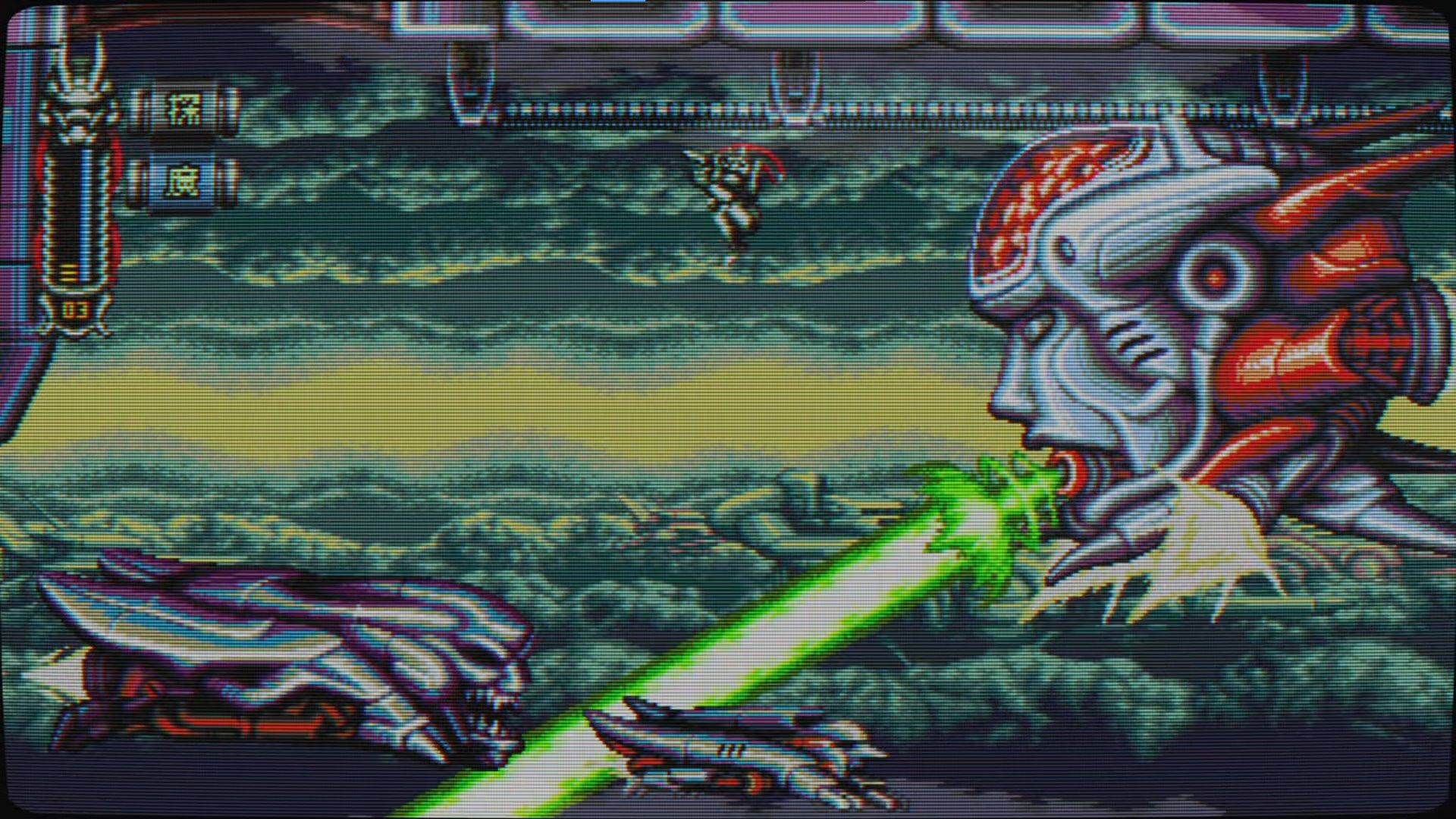 She also has an attack where she fires a laser beam from her mouth. This attack is pretty fast, and it will take out the platforms below. The only place you are safe is when you are clinging to the rail and dangling beside her. This move is why your default position is hanging from the roof. 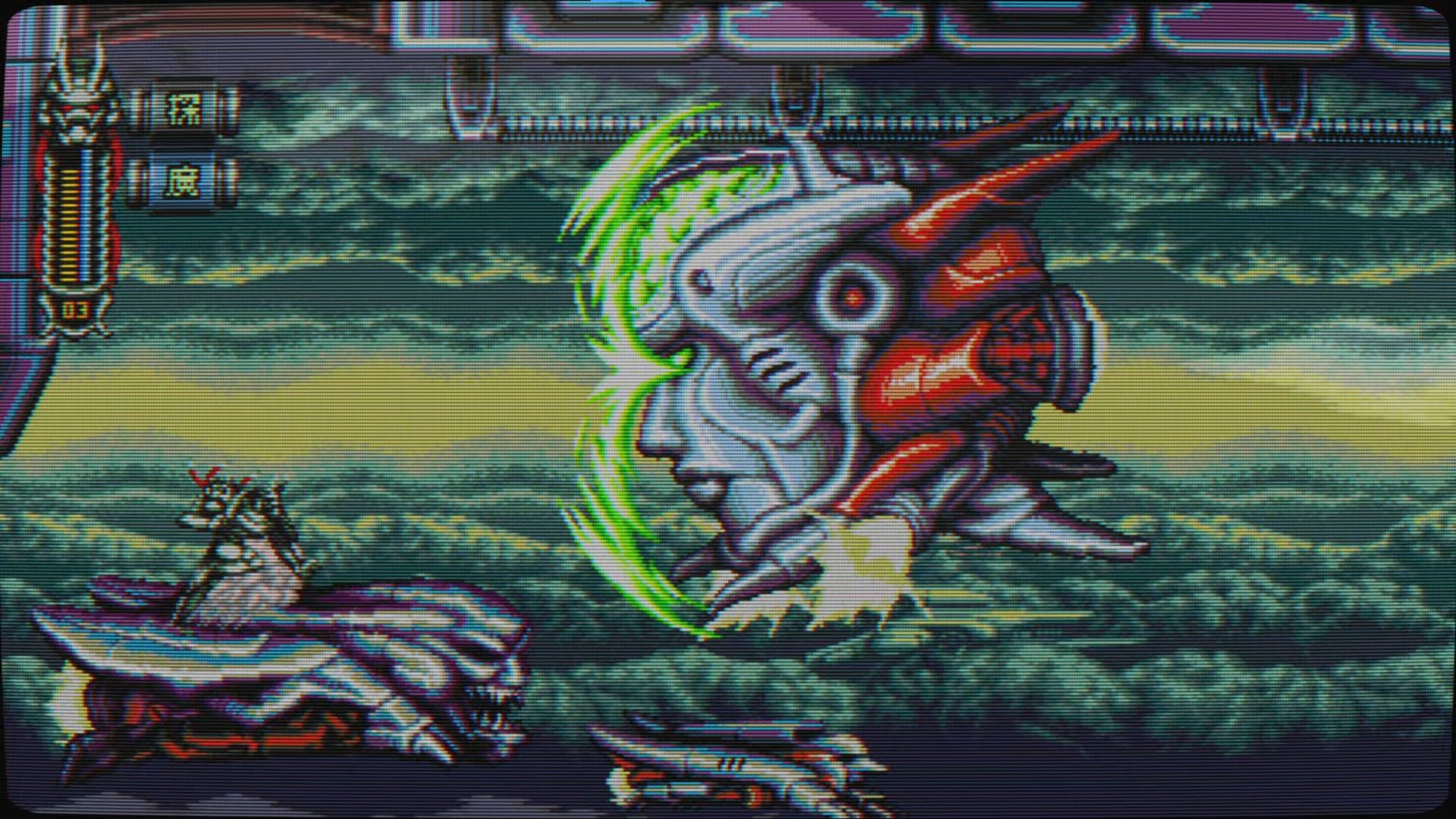 She also has a ramming attack. So, if you see her forehead glow green, retreat to the left side of the stage. If you are on the leftmost platform, you will be completely safe. After she finishes her lunging attack she will be a sitting duck, lay into her while she just hovers there.

The second part of the Asura's Fleet stage will place you on an elevator. One of three things will happen as you ascend… 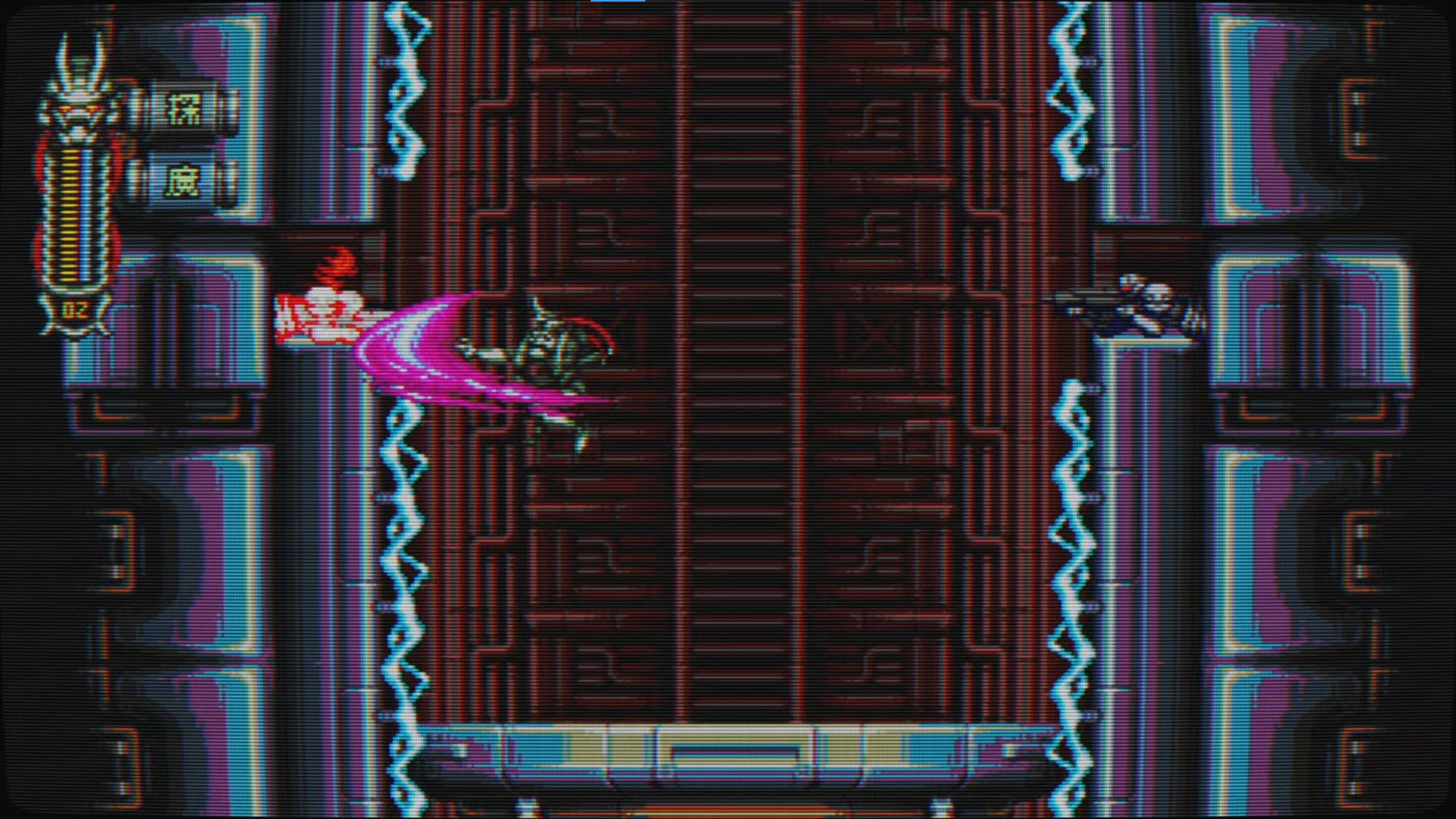 There are a number of Snipers wedged into tiny nooks that will shoot at you once you are aligned with them. However, they can only fire in a straight line in front of them. They also only need to be hit once with a standard attack, so a single jump slash will kill them. Always be proactive about taking these guys out, as they will start to be bunched together once you get higher up. 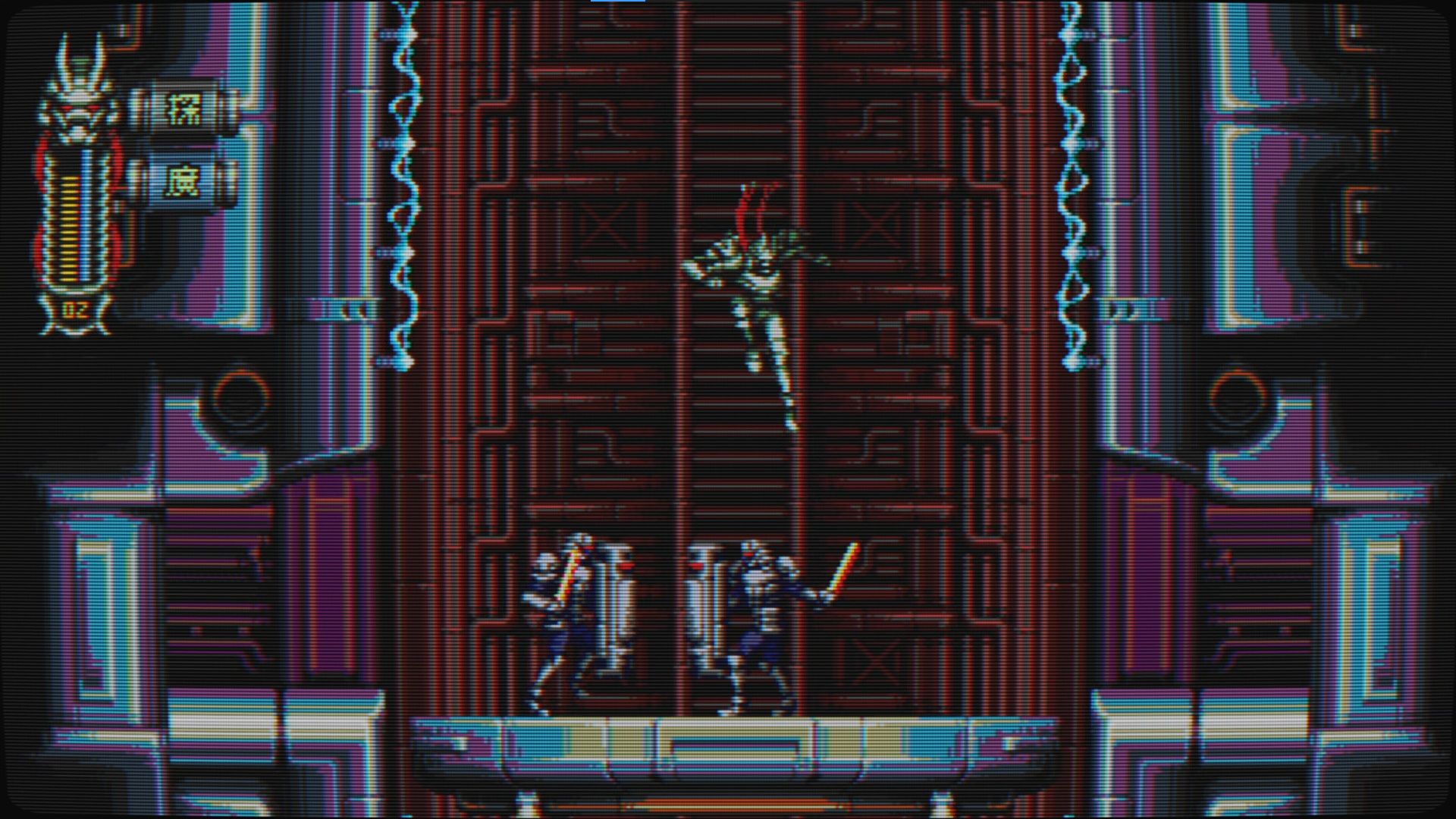 Next, the elevator will stop two times. The first time it will stop to let two Shield Soldiers on, and the second time it will stop to let two Ninja on. With the Shield Soldiers, just jump up, and then dive kick them when they commit to an attack. With the Ninja, perform a Dashing Attack the second they enter the elevator (the first one enters on the left, the second one enters on the right). You should be able to kill both of them before they have a chance to attack. 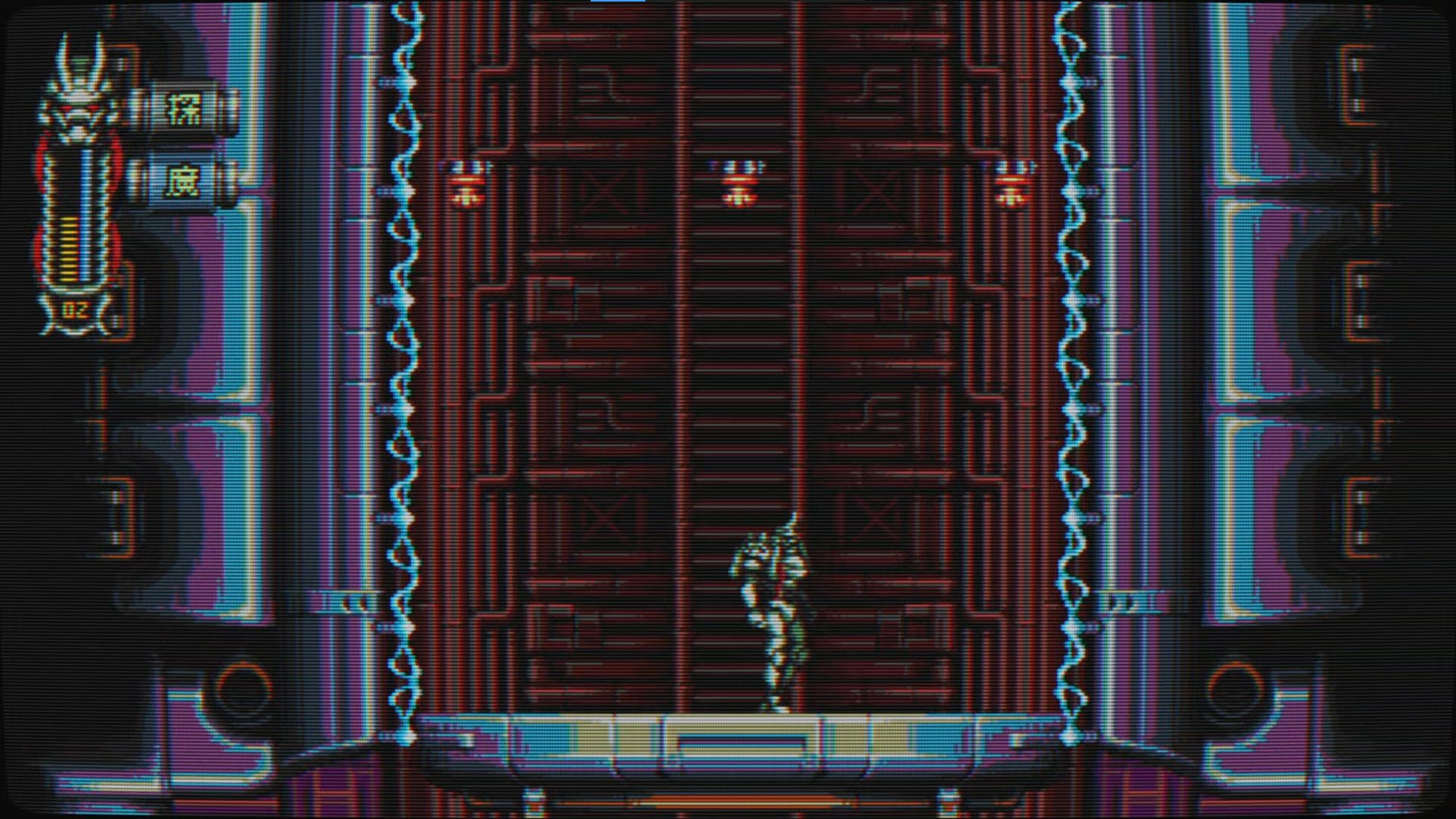 Lastly, bombs will fall from the sky. Not only do you need to position yourself in between them, but you need to jump before they hit the floor so that you don't get hit by the splash damage. 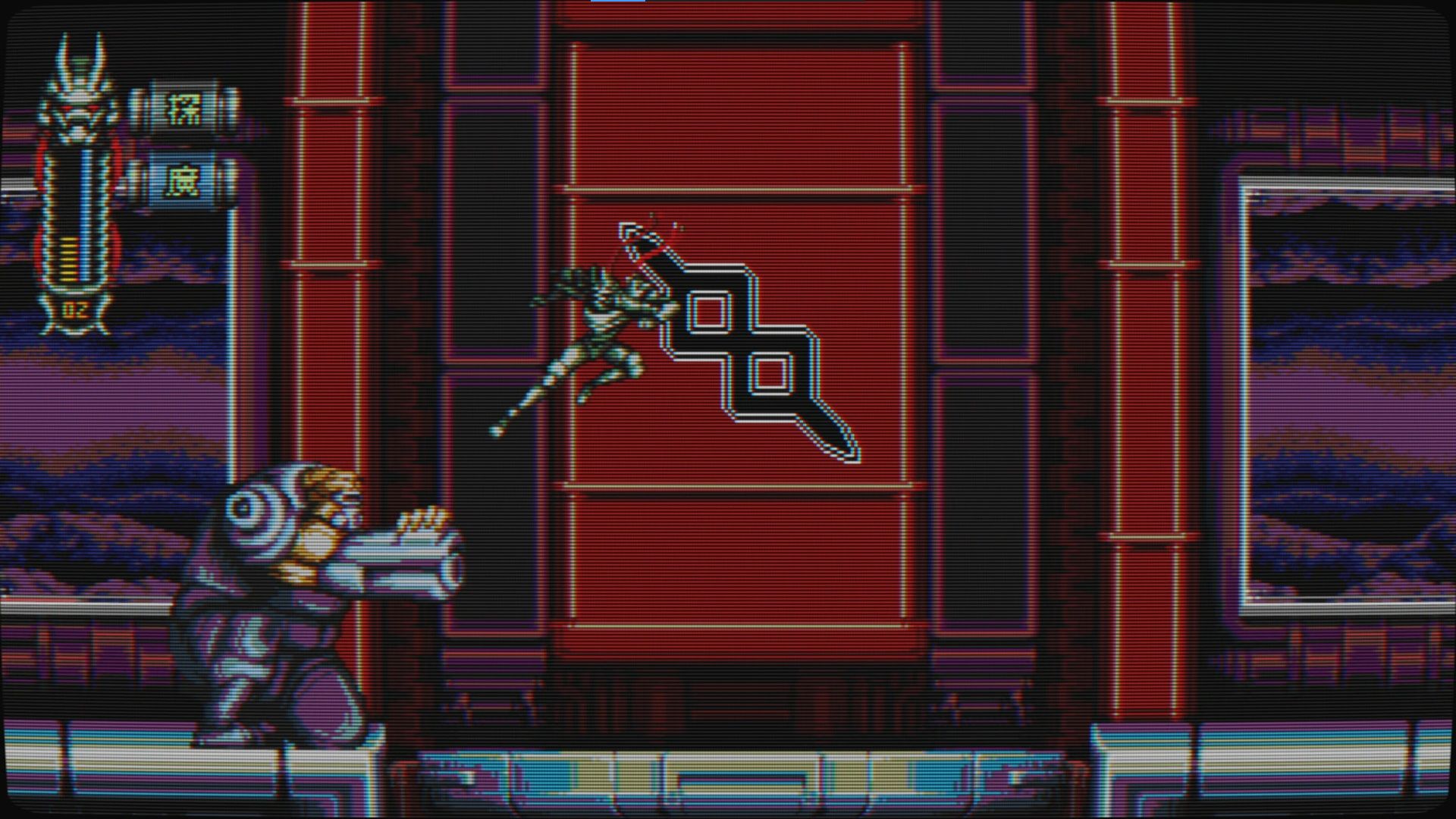 Once you get to your destination, you will have to fight a Sumo Cyborg. He has a bunch of moves. Firstly, he has a charging attack. You will want to hop over that. He also has a projectile attack. When he fires his cannon, jump over it and Dive Kick him a few times. 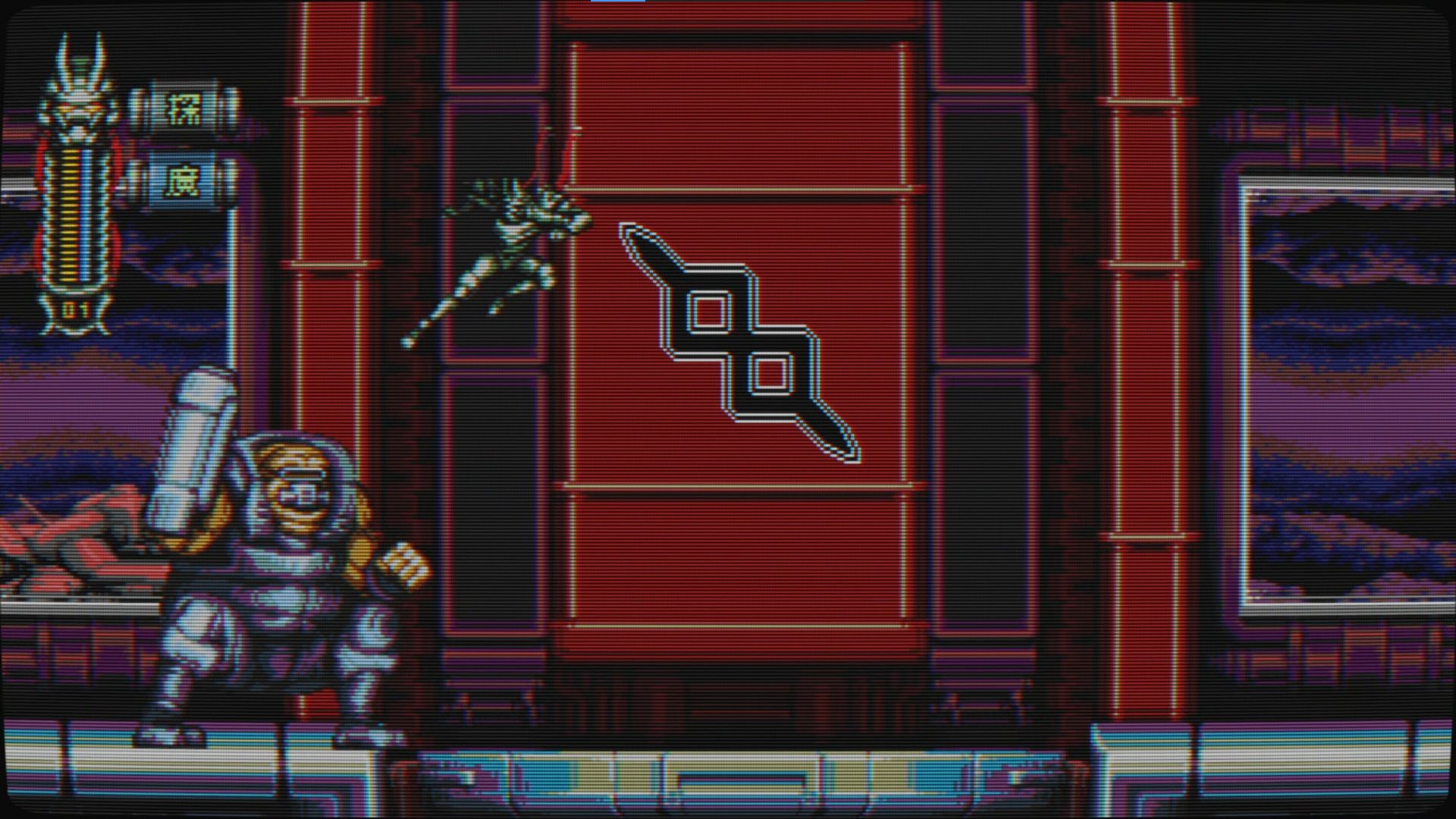 Lastly, he has an attack where he electrifies his body. When he holds his cannon arm up, a bolt of lightning is about to hit him. This is why when you are Dive Kicking him you will be wanting to use your more horizontal version. That way you don't need to be directly overtop of him. You still have time to hit him with one more Dive Kick after he calls down the lightning (before he is fully electrified). However, if you kick him when he is electrified you will take damage. 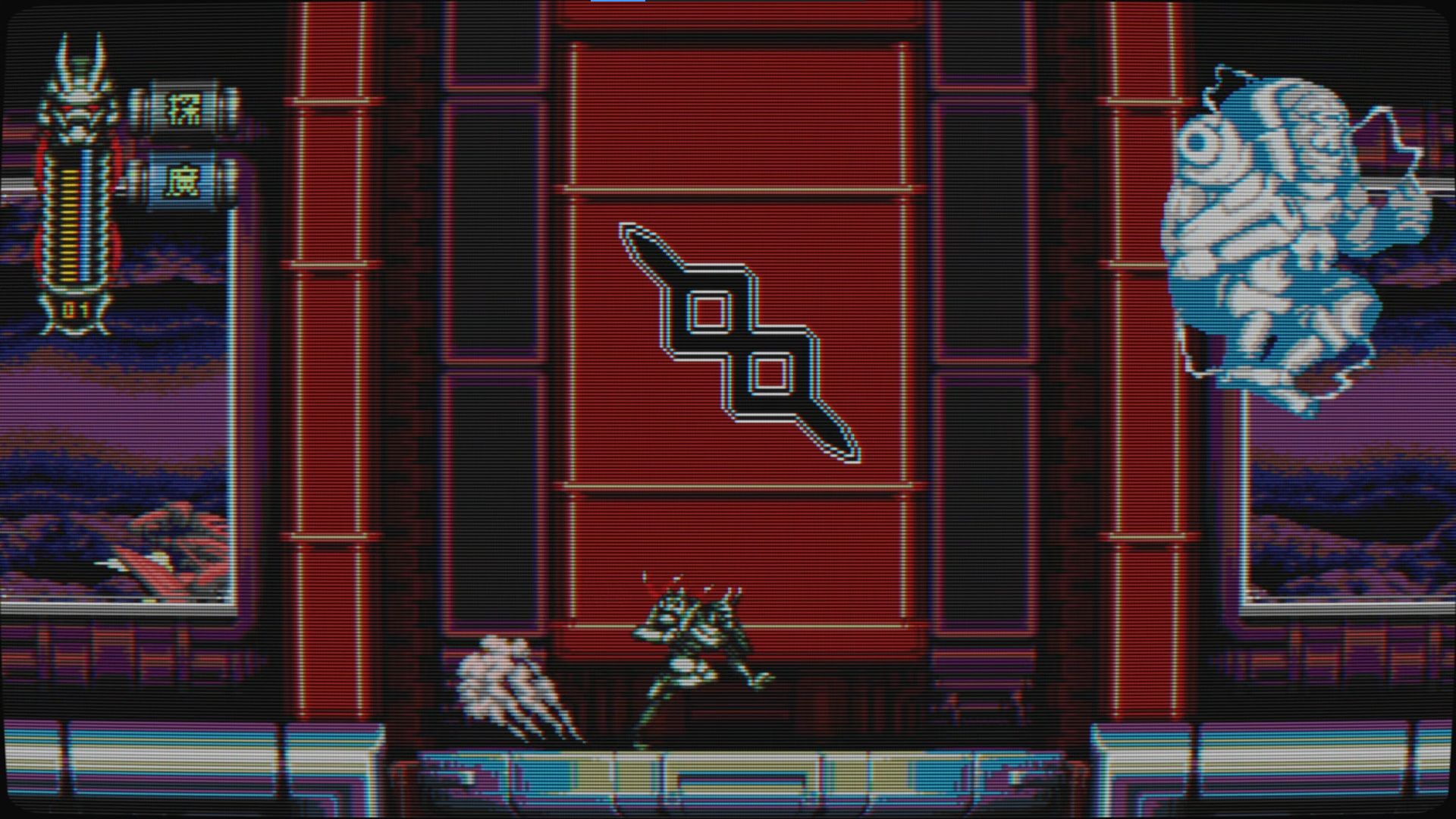 You can use your Dashing Attack to both hop over the ground fireball and land a big attack after the second slam. 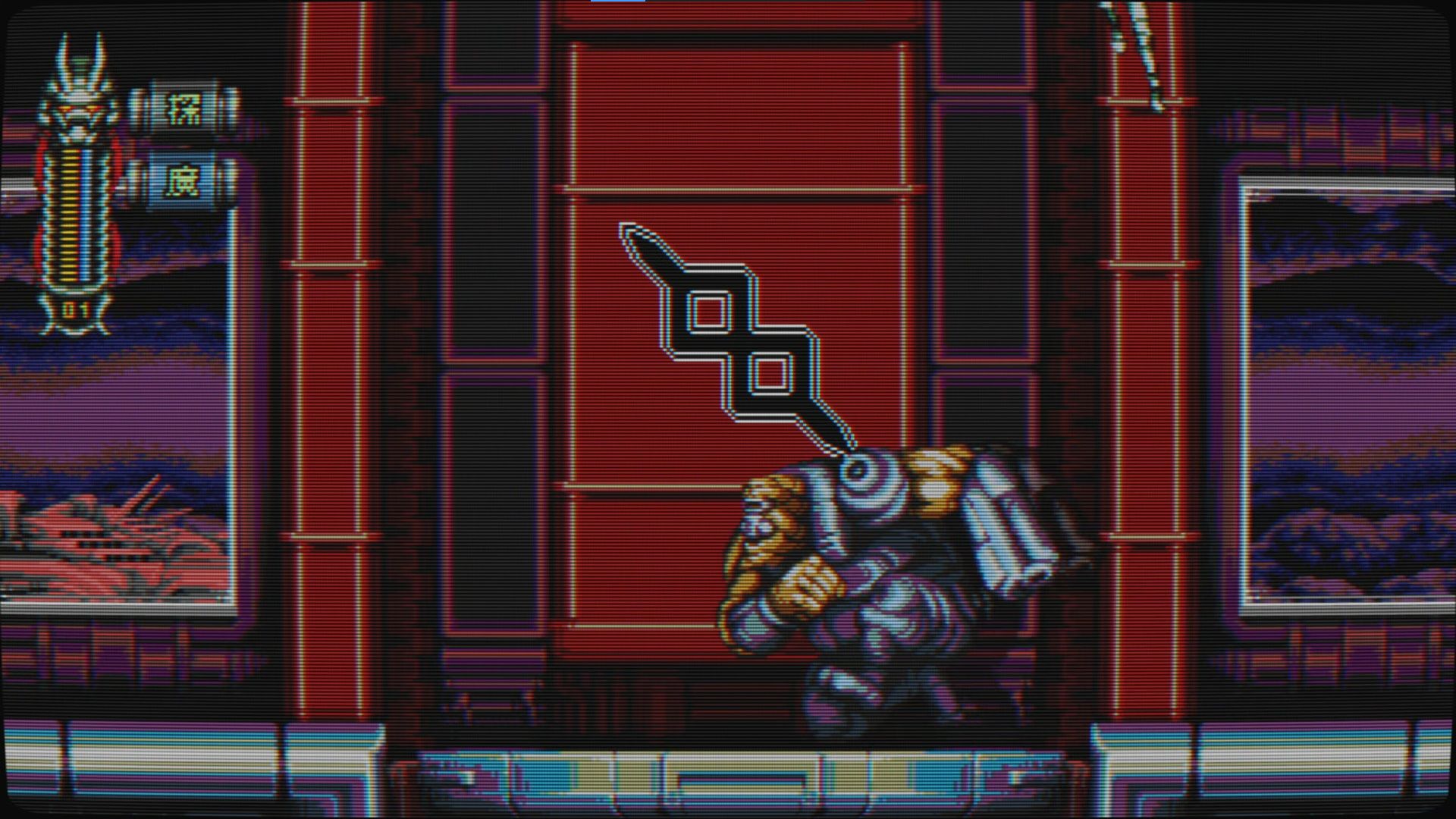 This battle will start with a power-up canister in the center of the stage. You don't have to use this right away. You can let it sit there until you really need it. 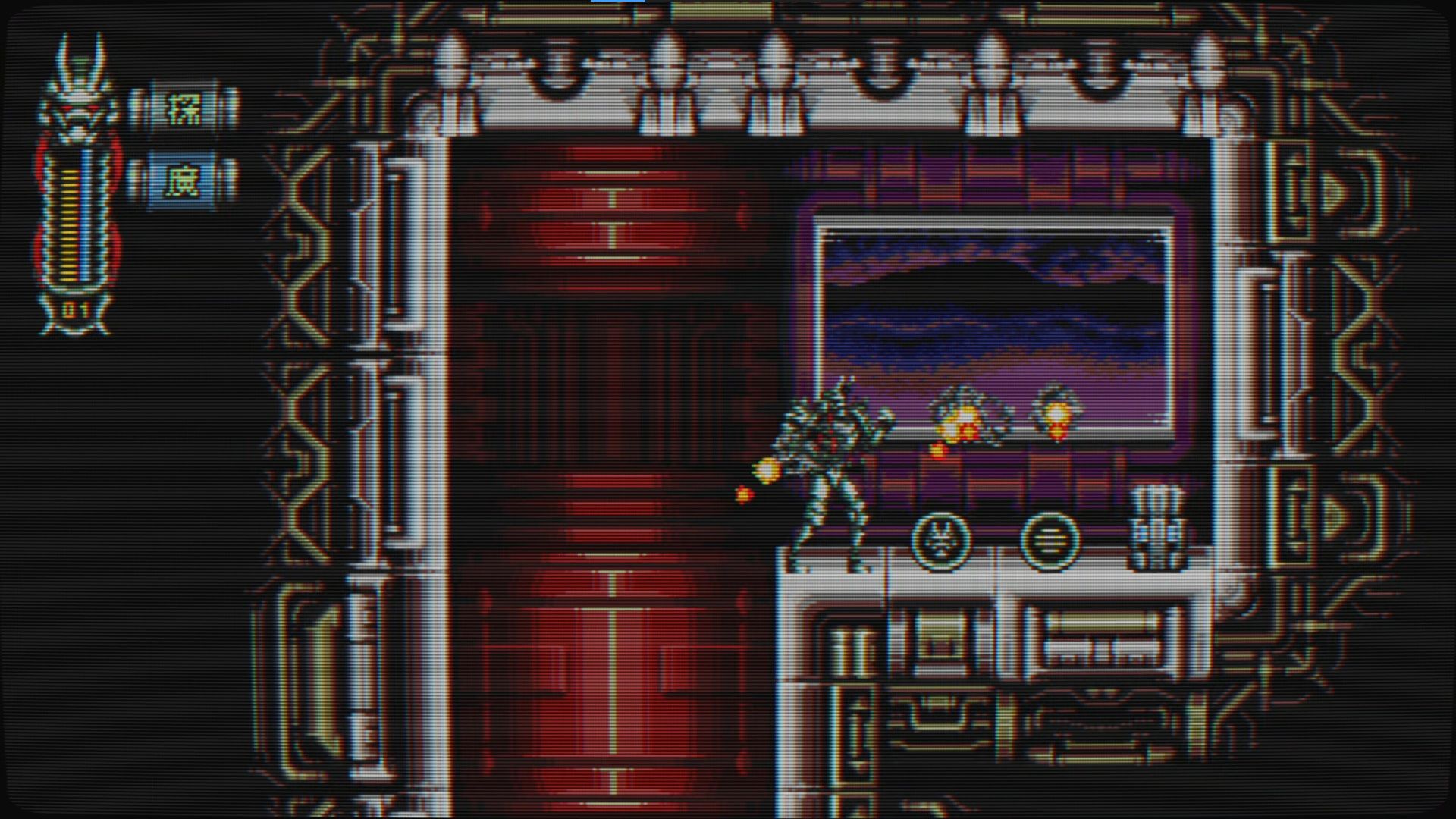 Once you finish off the Mid-Boss, you are going to work your way through the fleet. You will be fighting Shield Soldiers, Shuriken-Wielding Soldiers, and Ninja. For the sake of time, just jump over the Shield Soldiers and Shuriken-Wielding Soldiers (unless you are after the Upgrade Chip) and take the Ninja out with your Dashing Attack. When you get to the shaft on your right, there is an extra life up above. Go get it. 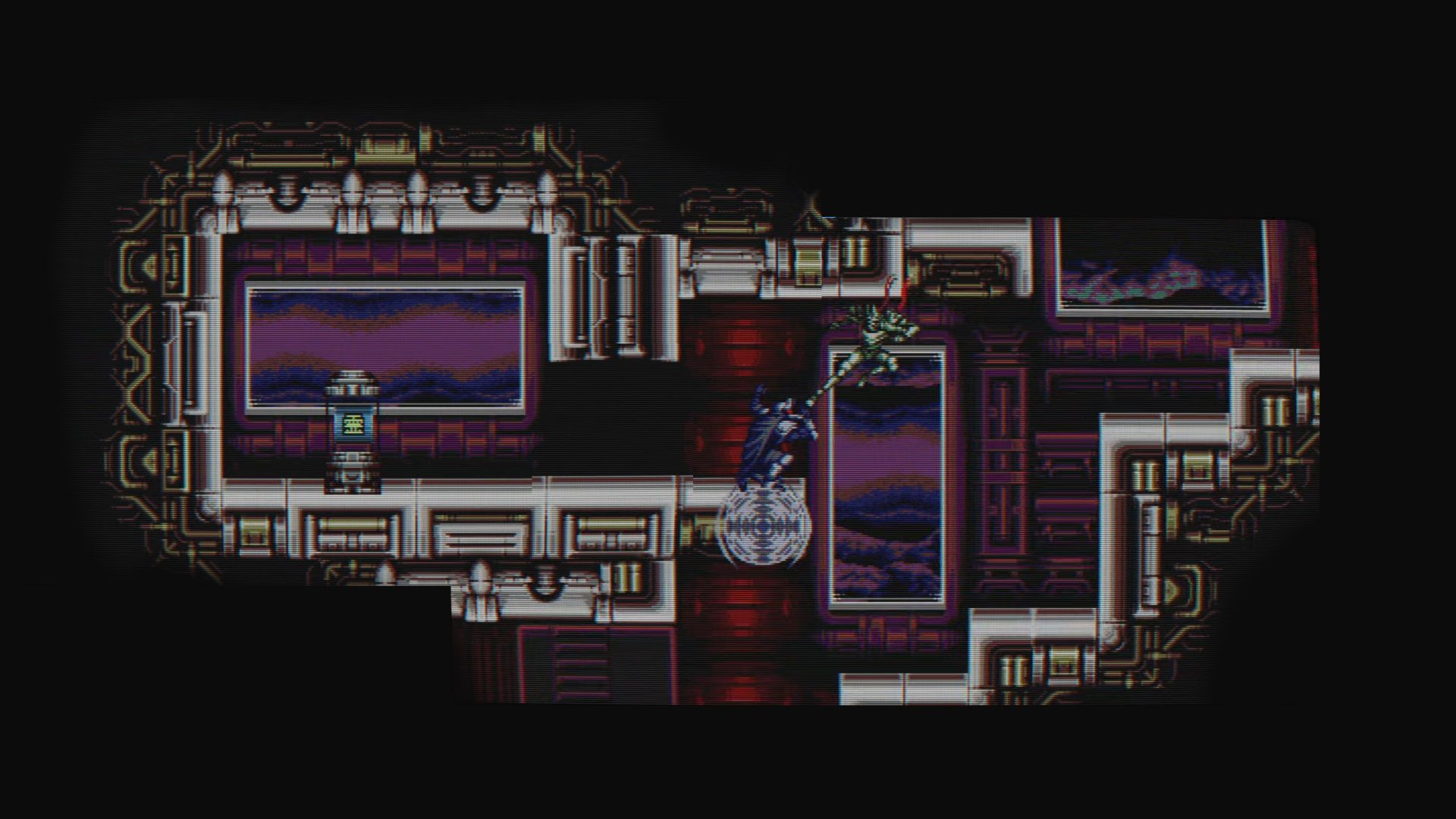 Jumping down the shaft, you will land on some stairs. There will be two Shuriken-Wielding Soldiers to your right. The second one is guarding a hidden room. Kill him and then walk through the wall he is standing in front of. You will obtain the Soul Eater Chip!

The picture above shows you the hidden room, but in the actual game the room will not be visible. 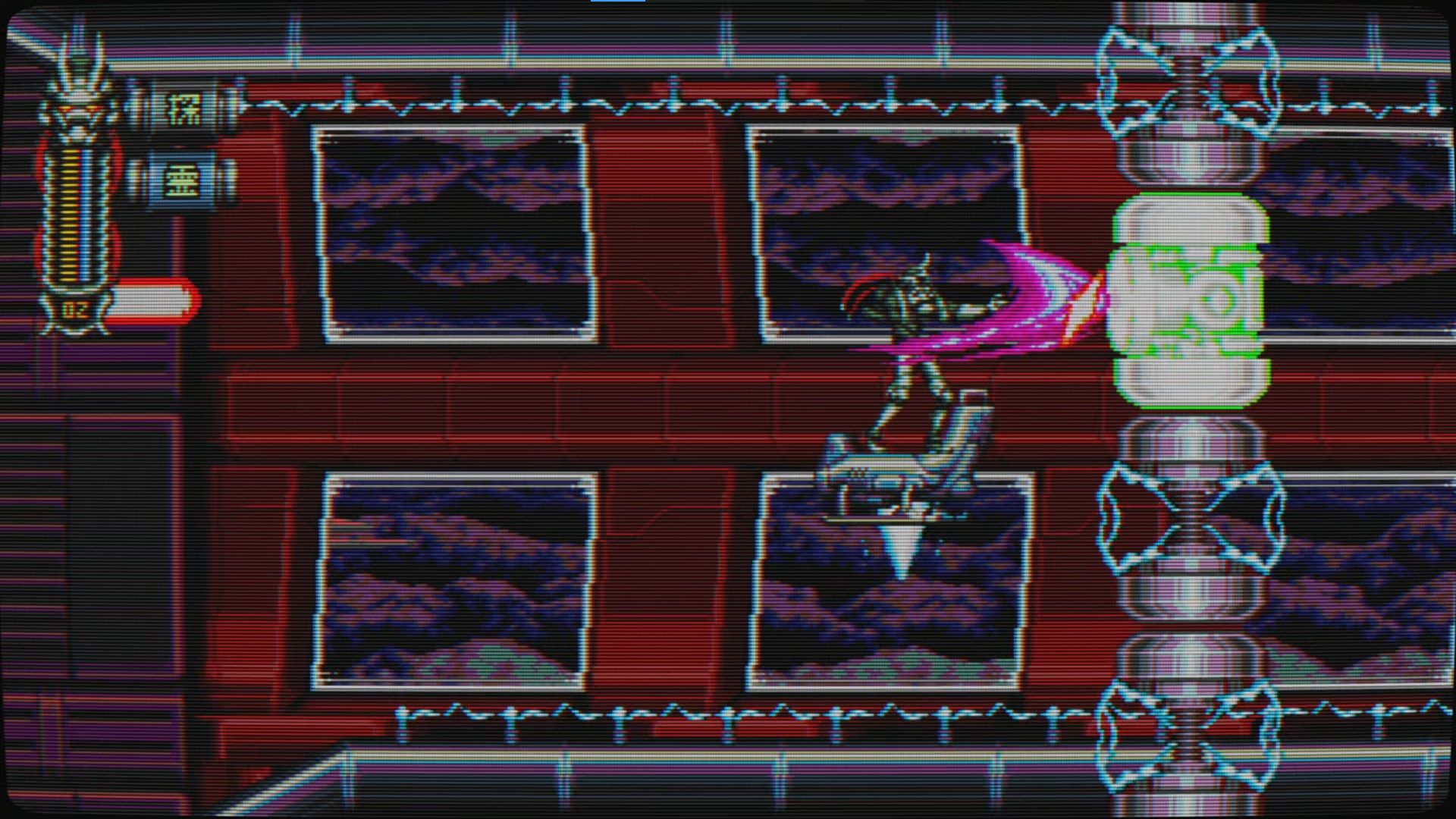 You will battle a few more enemies, and then you will enter into a vehicle section of sorts. Once you are on the hoverbike you lose your Crouching Slash, Dive Kick, and Dash Attack. One of the obstacles you will encounter multiple times is a robotic wall. You need to hit the sensor in the center, but it will also be firing lasers at you. However, it has a pattern; it will alternate between firing a straight shot and an angled shot. So, hover below when it fires straight, and then sit in front of it when it fires the angled shot (while whaling on it with your sword). 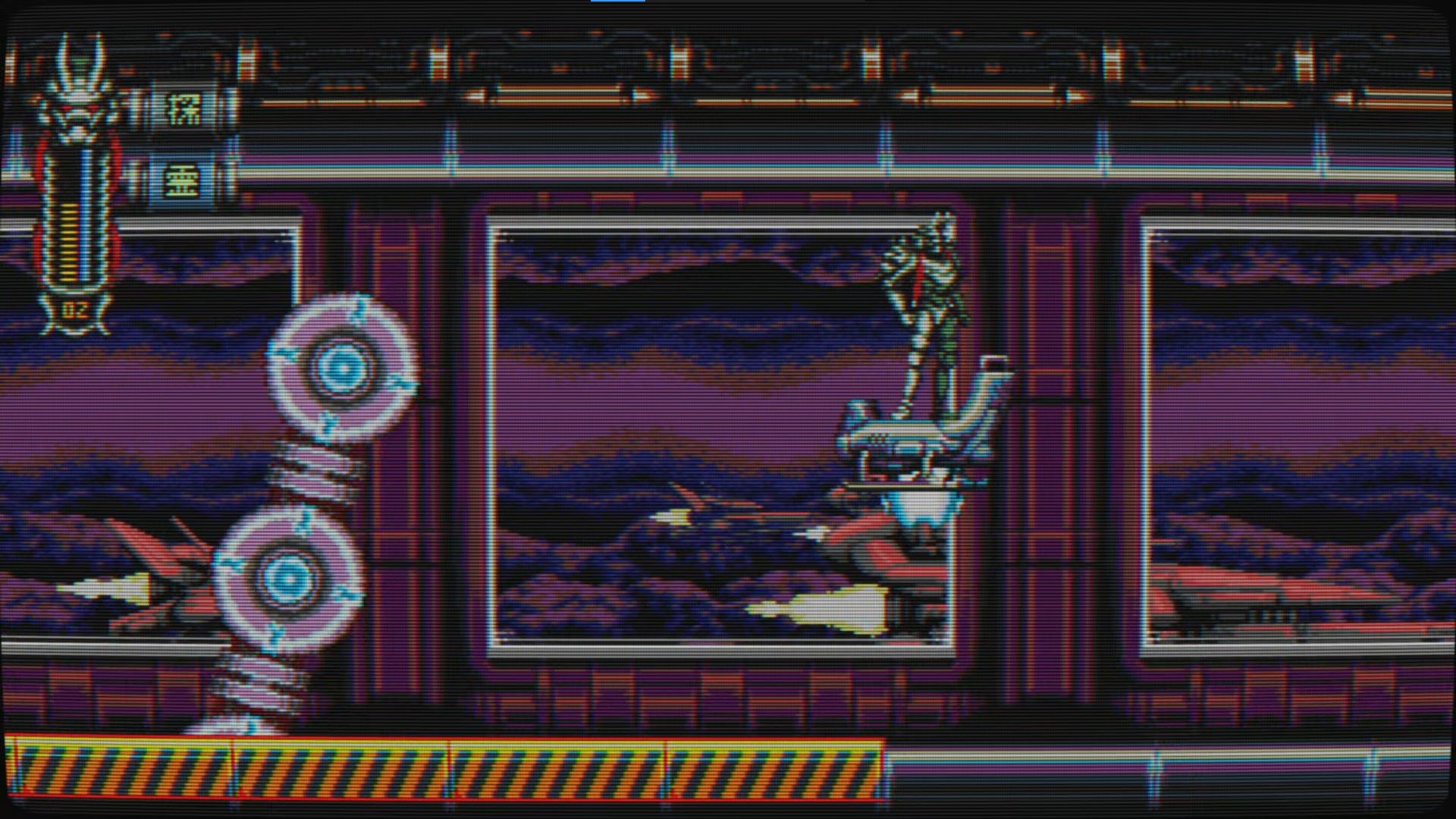 The rest of the stage will be focused on weaving between the different obstacles. There is no real trick to it, but know that you can't push forward any faster, so there is no need to rush. Also, you will have plenty of opportunities to recover health with power-ups. They are floating around. 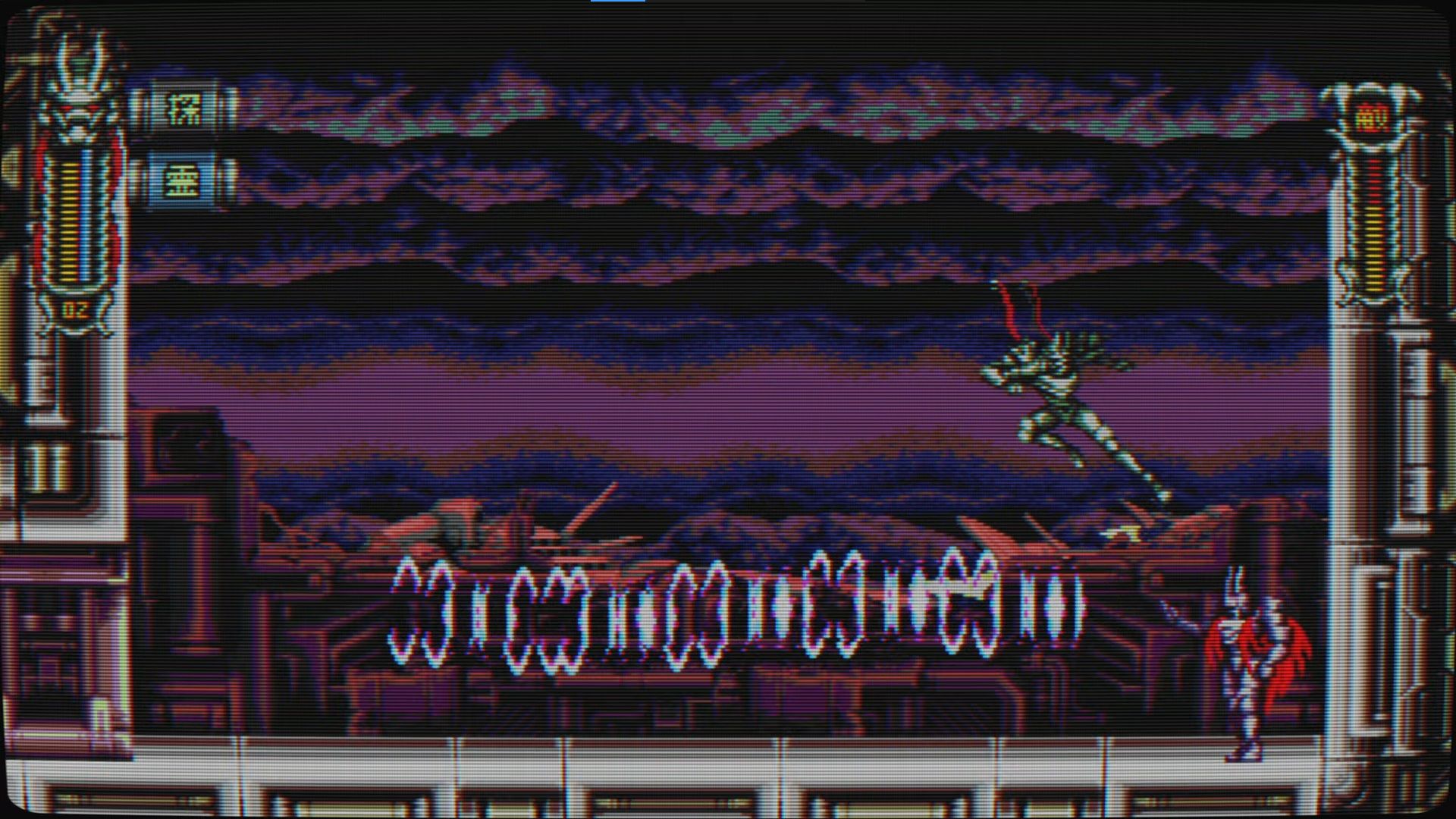 Stormdiver can fly across the screen. In fact, she has dash attacks that she can use while flying, and she has a dash attack she can use while ground. She fires looping cyclones. Like her dash, she can fire these at you on the ground or in the air. Unfortunately for her, none of her attacks hit above her head (well, there is one, but we will get to that). 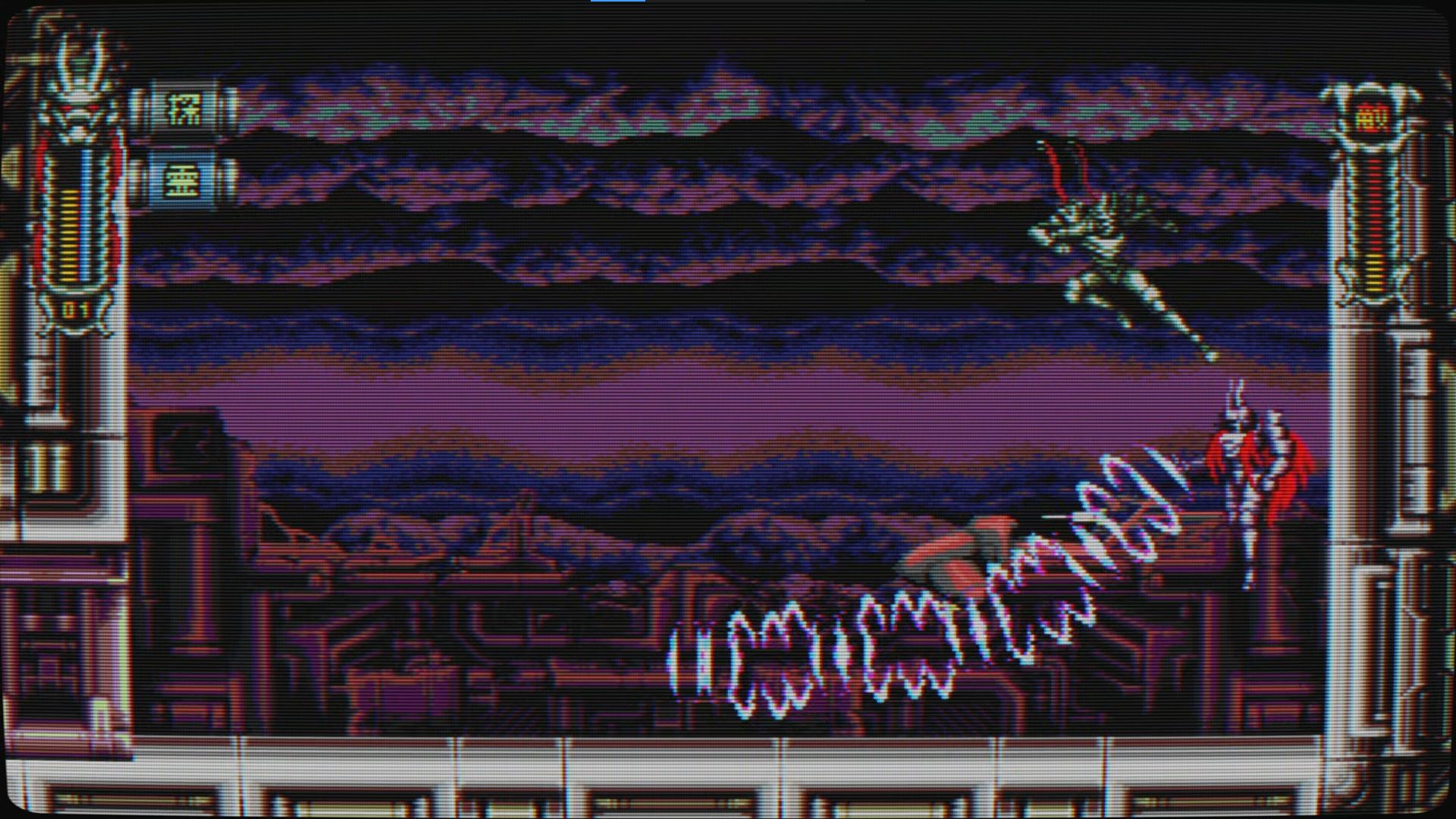 So, just Dive Kick her into oblivion. She doesn't have anything that can hurt you in her first form if you angle your Dive Kicks correctly. Not a single move. However, there is one big caveat. 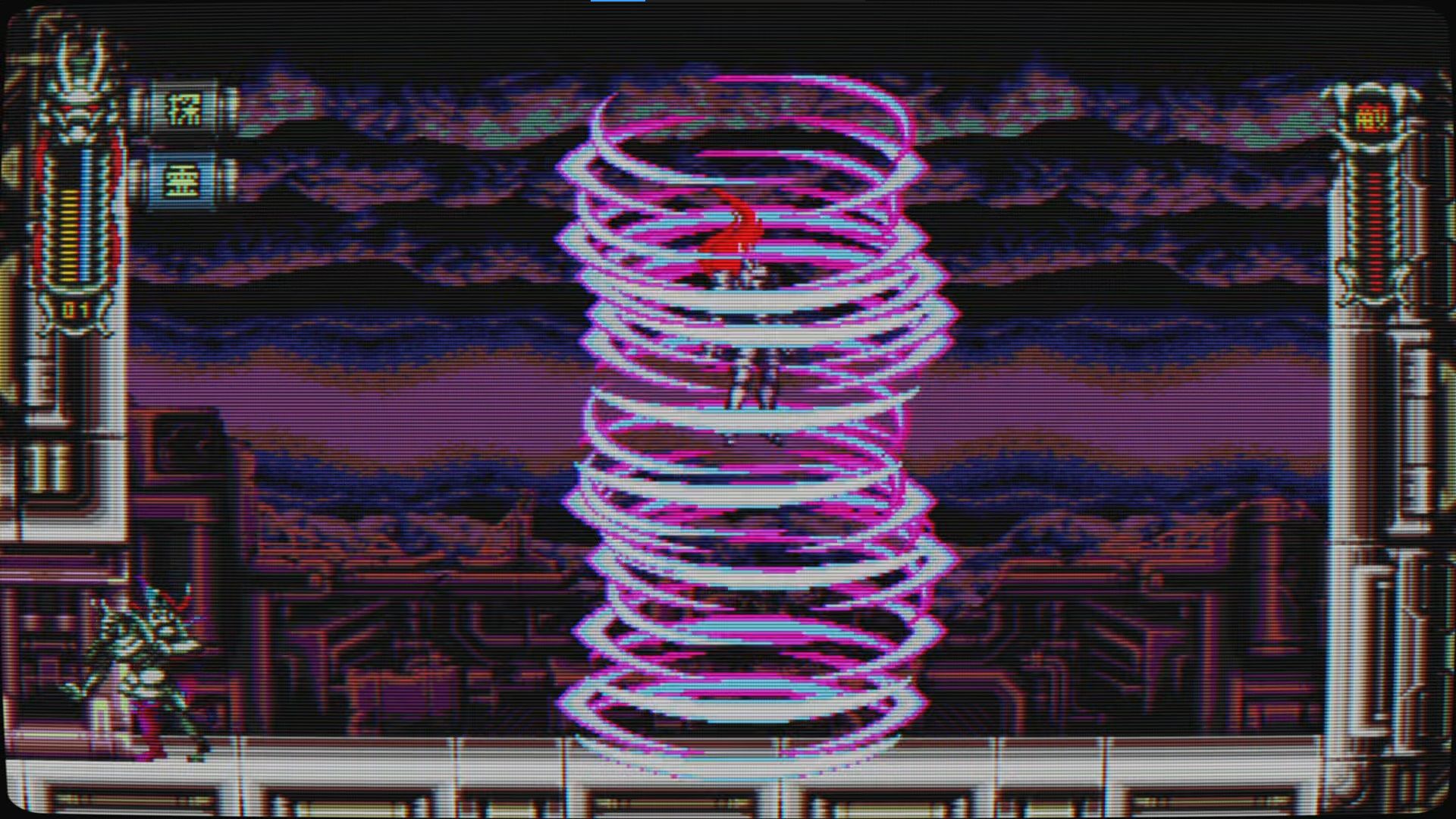 During her second phase, Stormdiver will create a giant cyclone. If you get caught in this attack, you will almost certainly die. It has a vacuum effect, but if you dash away from it, you will be fine. Once it dies down, you can resume Dive Kicking her into oblivion.