Vikings are still definitely in, according to Valheim’s sales volume. After releasing on Steam Early Access last week, the co-operative open-world survival game has risen to the very top of the Steam sales list, which measures total revenue generated for any given game.

Valheim has even beat-out the recently released Nio 2: Complete Edition and older standbys like Xcom 2 and Rust. 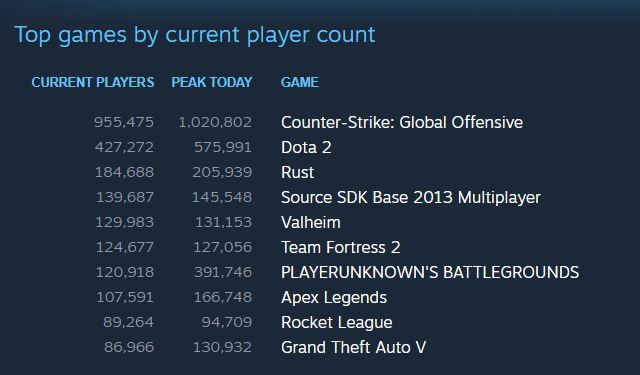 It’s not just dollars that Valheim is generating. The game hit fifth in Steam’s overall concurrent player count today, beating out juggernauts like Team Fortress 2, PUBG, and Rocket League. it’s also climbing on the Twitch viewer list, sitting at 33rd overall with over two million hours of watch time in under a week.

If you haven’t heard of Valheim, it’s an open-world survival game with an emphasis on crafting and a procedurally generated world. You play as a Viking in the realm of Valheim–a sort of purgatory where you can prove yourself worthy to ascend to Valhalla. You’re tasked with slaying Odin’s rivals and bringing order to the land, which will require a healthy amount of exploration, resource gathering, and of course, crafting bigger and better arms and armors.

Incredibly, Valheim manages to pack a lot of game into a tiny package. Just one gigabyte of storage is required to install Valheim thanks to its simplistic art style. The game has very low-res textures and makes creative use of lighting and visual effects to keep the overall file size down. It also randomly generates the game world so there’s no need to maintain a huge map file. Although, we should point out that your save file is fairly large and Valheim will undoubtedly grow larger as more content is added through its early access period.

If you’re looking for an alternative to Assassin’s Creed Valhalla to get your Viking fix, Valheim might be just the game to keep that horned helmet on your head.