V Rising: How To Find And Defeat Meredith The Bright Archer

V Rising bosses interact with the open world in many interesting ways. It is possible to find a boss currently engaged in combat, and even be able to steal a low-health kill if you are very lucky. Meredith The Bright Archer is an enemy that can fall victim to the dangers of her surroundings, and you may find yourself engaging her much earlier than expected.

This guide will help you locate Meredith The Bright Archer, provide the best battle strategies for defeating her, and teach you what rewards you will gain from doing so. 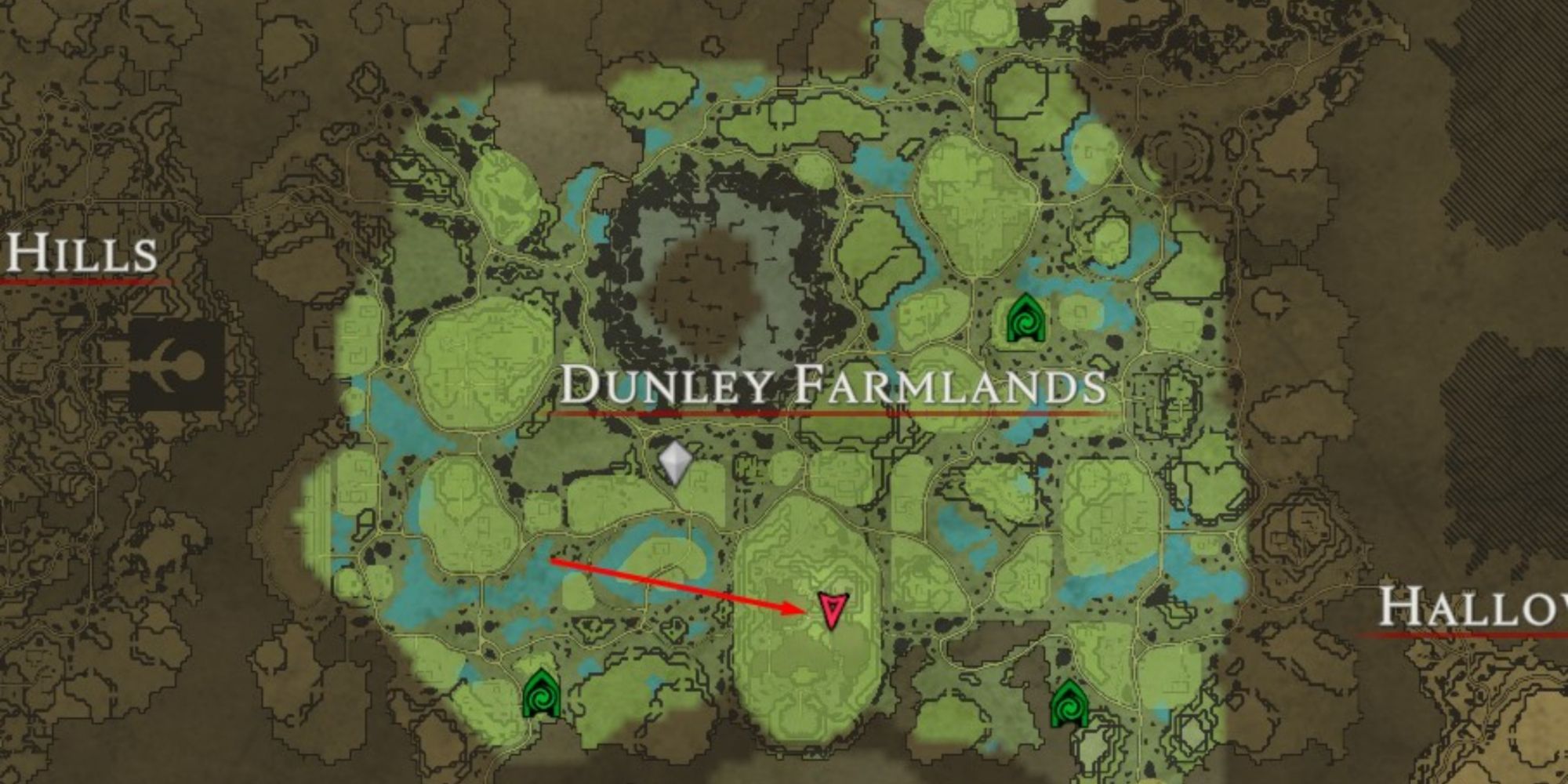 Meredith The Bright Archer can be found patrolling the Haunted Iron Mine in the Southern Dunley Farmlands. She wanders in a pre-determined route inside the Mine itself, and regularly comes into conflict with its many denizens. A combat level 46 Undead Commander also inhabits the Mine, and the two can often be found duking it out. Meredith will typically win, but you may encounter her mid-battle, and can take advantage of her reduced health, or even get a free kill!

While being the best source of Iron Ore in V Rising, The Haunted Iron Mine contains many enemies, varying between your typical Undead packs, and some Militia patrols. These groups will fight each other on sight, so again try to take advantage of this to pick up some free kills, as it may take you a while to clear through the Mine depending on where Meredith currently is. Using your Blood Altar is not really required, she will always be found in the Mine and the route is very linear.

Roughly every 30 seconds, the Mine will erupt, dropping pools of Unholy Fire on the ground in random positions. This will occur during your encounter with Meredith and you should watch out for these, as they hit pretty hard and can lead to you being hit by her abilities.

Scattered throughout the Mine are plenty of Chests and Golden Chests, and it is a great place to farm for a variety of loot, as you progress forwards to Meredith. 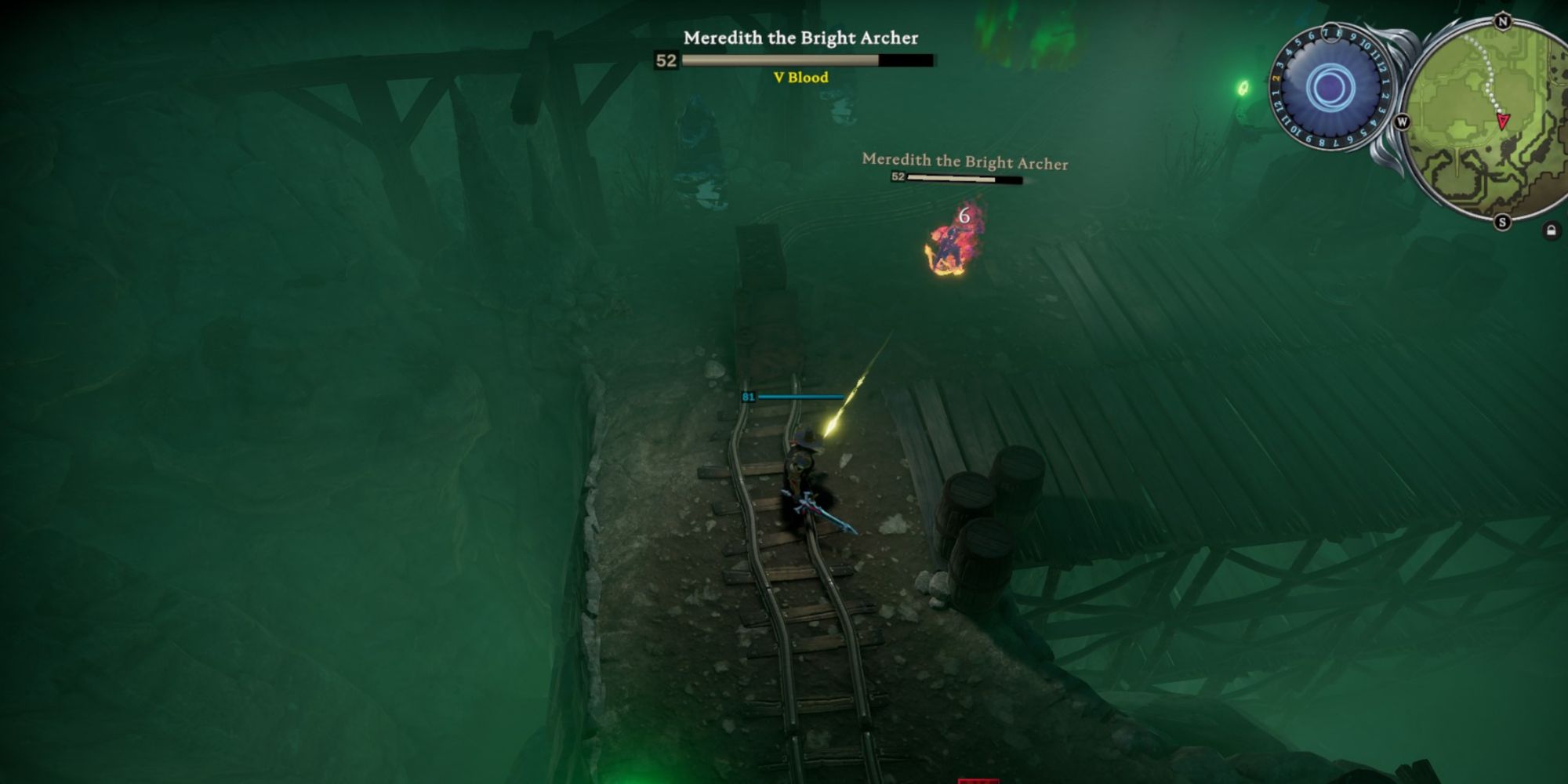 Meredith The Bright Archer is a combat level 52 enemy and has a handful of abilities, some of which can be quite impactful. She is generally considered one of the easiest mid-game bosses, and you can play pretty aggressively against her, especially if she is in combat with the Undead Commander. Her first attack is a simple Arrow Shot, that deals light damage. Circle the boss as you DPS, and you should not be hit by this at all.

Meredith will sometimes empower this Arrow Shot into a Blessed Arrow, which will stun you upon impact. The stun lasts for a lengthy amount of time and can leave you vulnerable to other abilities; try to be vigilant on your positioning so she cannot combo you. The boss will also do a fairly standard AoE Arrow Barrage, dealing damage in a pool on the floor. Easy enough to dodge.

Meredith's best move is to dash repeatedly, performing a melee attack upon each arrival. This ability is very fast and will probably cause you to miss any spells aimed at her previous location. The damage it deals is nothing special, but you will probably want to save your Travel Ability to try and react to this.

Her last spell is to summon two Militia Warriors to aid her. These are not very difficult foes by themselves, but definitely prioritise focusing them down, so you have fewer variables to consider and can focus on killing Meredith. Her moveset is not very strong, and as long as you don't fall victim to her Blessed Arrow stun, you should be totally fine with appropriate gear.

Speaking of which, come equipped with an Iron Weapon, with the Sword being a great option. Use some Merciless or regular Hollowfang for your Armour and a spell combo of Shadowbolt and Chaos Volley. Scholar Blood is always very useful for empowering your magic attacks, and if you want to be really safe, a Holy Resistance Potion will make you take less damage from most of Meredith's attacks. 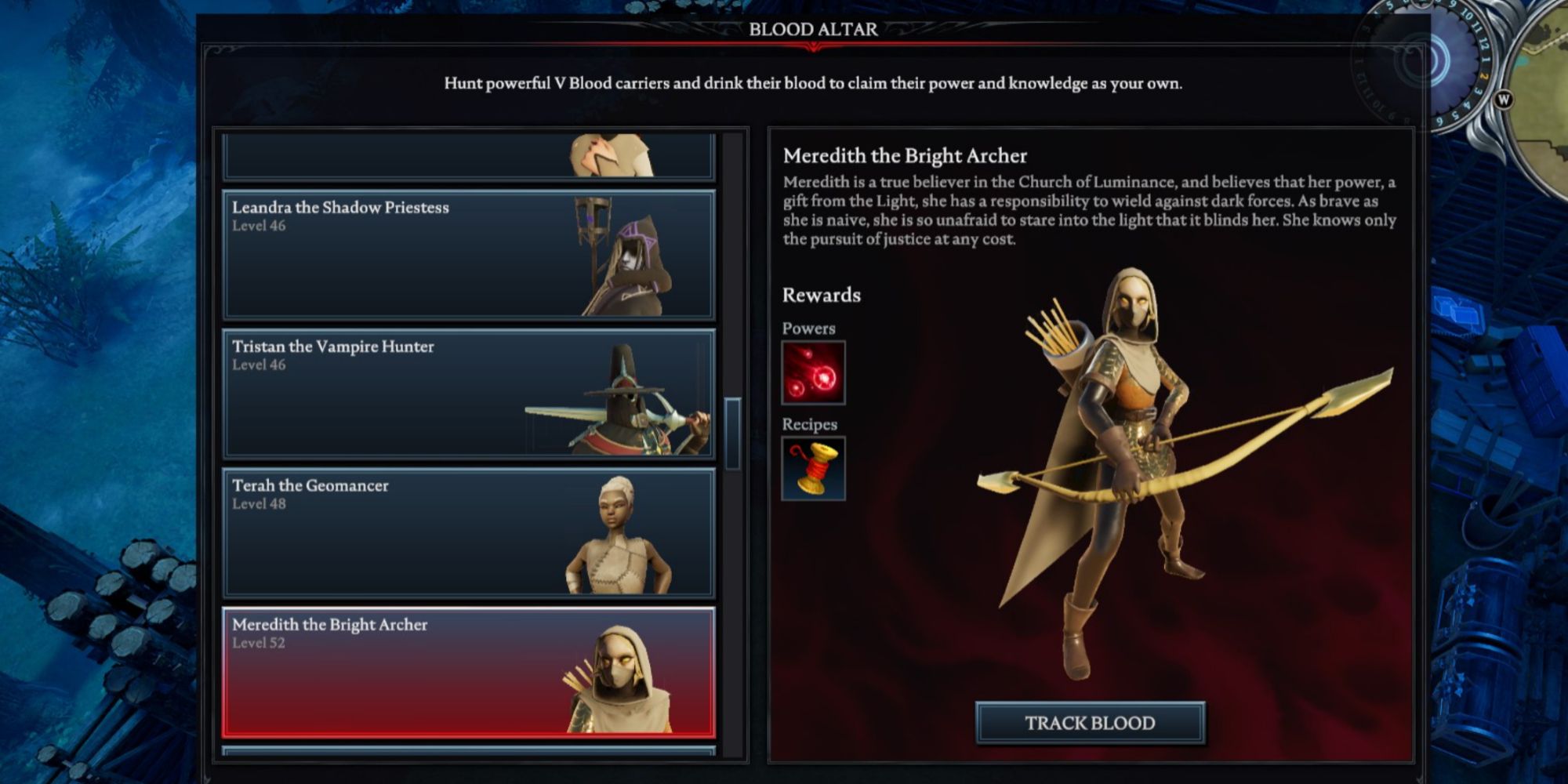 Meredith The Bright Archer only has a couple of rewards, the first being the Sanguine Coil Vampire Power. This will deal low magic damage but heal you for a portion of the damage done on hit. It will also heal an ally if it passes through them, and provide a small portion of that heal onto you. This is a great healing ability, so if you are playing a more supportive build, it can be a really strong option to heal your teammates. The damage is low, so you might not want to run it for optimal damage, but if you are struggling with soloing a boss, it can be a nice alternative.

The other reward you will receive is the Wool Thread recipe. You can farm this pretty easily from most mobs in the Dunley Farmlands, so it is not vital for your progression, but it can be a nice way to get some extra resources. Crafting the Wool Thread will require eight Coarse Thread and 12 Fire Blossom.