In Two Point Hospital, there weren’t any options for decorating outside of the hospital. But with the launch of Two Point Campus, that has all changed. Decorating your campus is an important factor in increasing attractiveness, relationship building, and staying healthy by exercising or joining clubs.

However, how decorating outside can bring benefits, and how some of these decorations can even be used inside the campus as well, is largely unexplained. So, we've come up with some tips to help you get your campus to a high satisfaction rate among students, and gain more money in the long run. 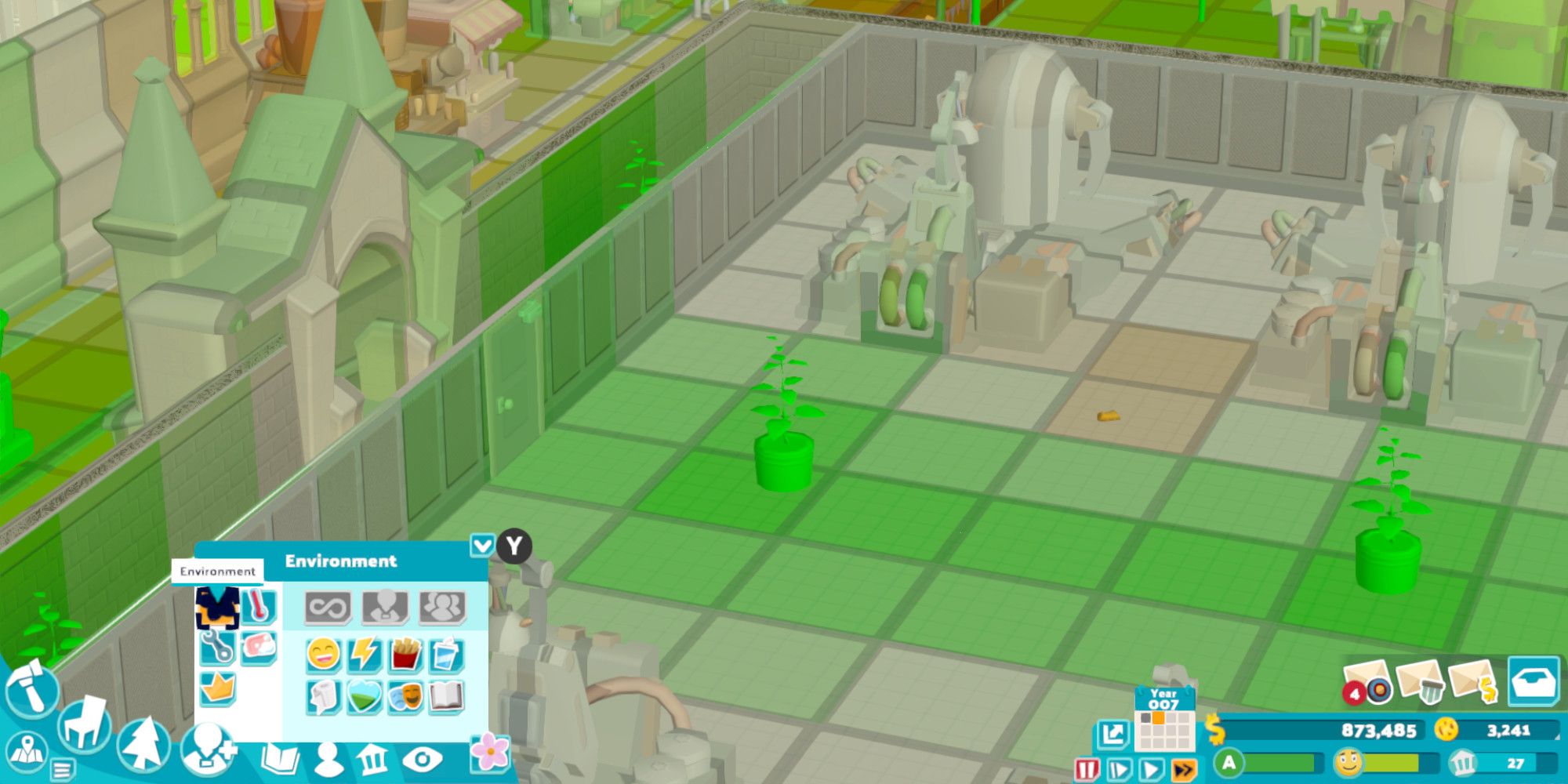 In Two Point Campus, plenty of menu options go unexplained, and are even hidden underneath other menus. One of these allows you to look at different areas, such as hygiene, attractiveness, and temperature in and around the campus.

The reason why it’s so important to use this menu is that it’s great for finding the density of attractiveness. It tells you which areas to improve. This could be alleviating crowding, hiring more janitors to pick up trash, or even increasing room prestige. 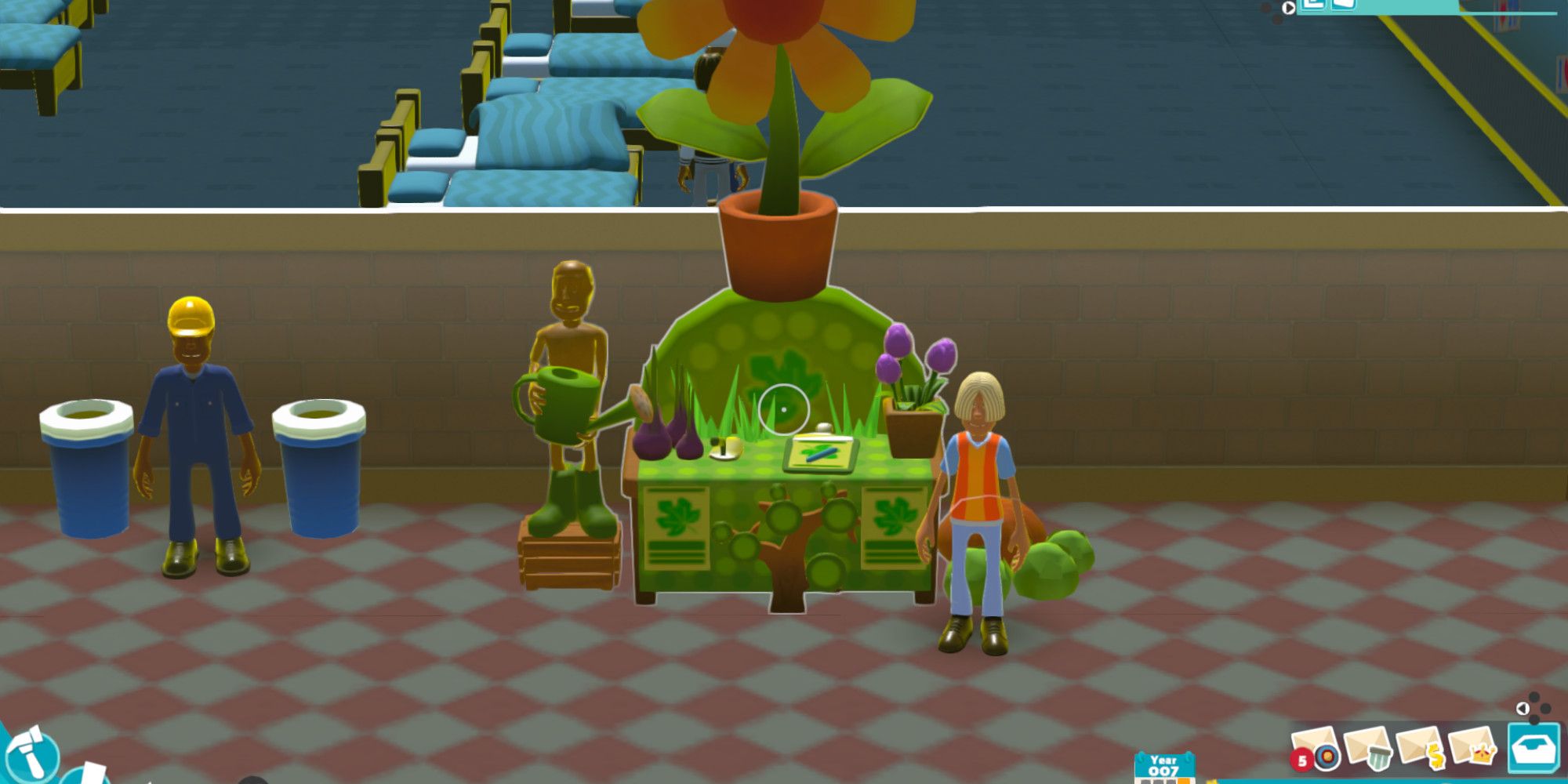 There are a total of five different clubs in the game, with the main ones that people use either being the power napping club, speed walking club, or the book club. Each of these clubs provides a variety of helpful things that can’t be understated in how much they help students.

However, one club that is often overlooked or placed last is the nature club. This is an incredibly helpful club to have, because the students will water plants around the campus and keep it clean. This will help increase your hygiene, and at the same time, keep your attractiveness levels up. 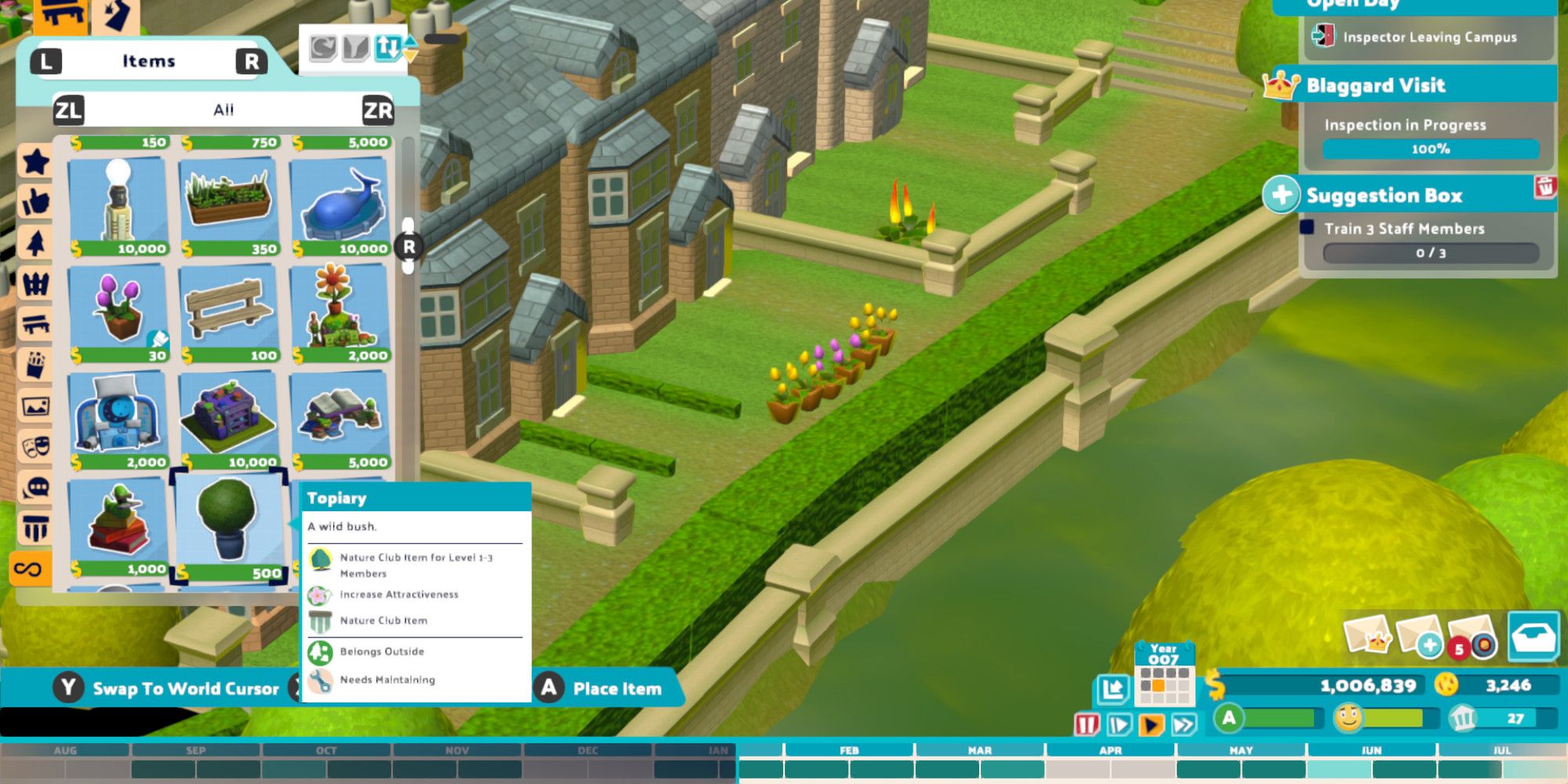 There are plenty of decorations in the game that are waiting to be unlocked with kudosh and placed down inside or around your campus grounds. Many of these come with attributes such as healthiness, food, thirst, attractiveness, and many more.

However, there are also plenty of decorations that have no attributes at all. These usually come in the form of pillars, fences, or other miscellaneous items. There are also a few decorations in the game that can give multiple attributes or do various things, and it's these which are typically better to place around your campus. 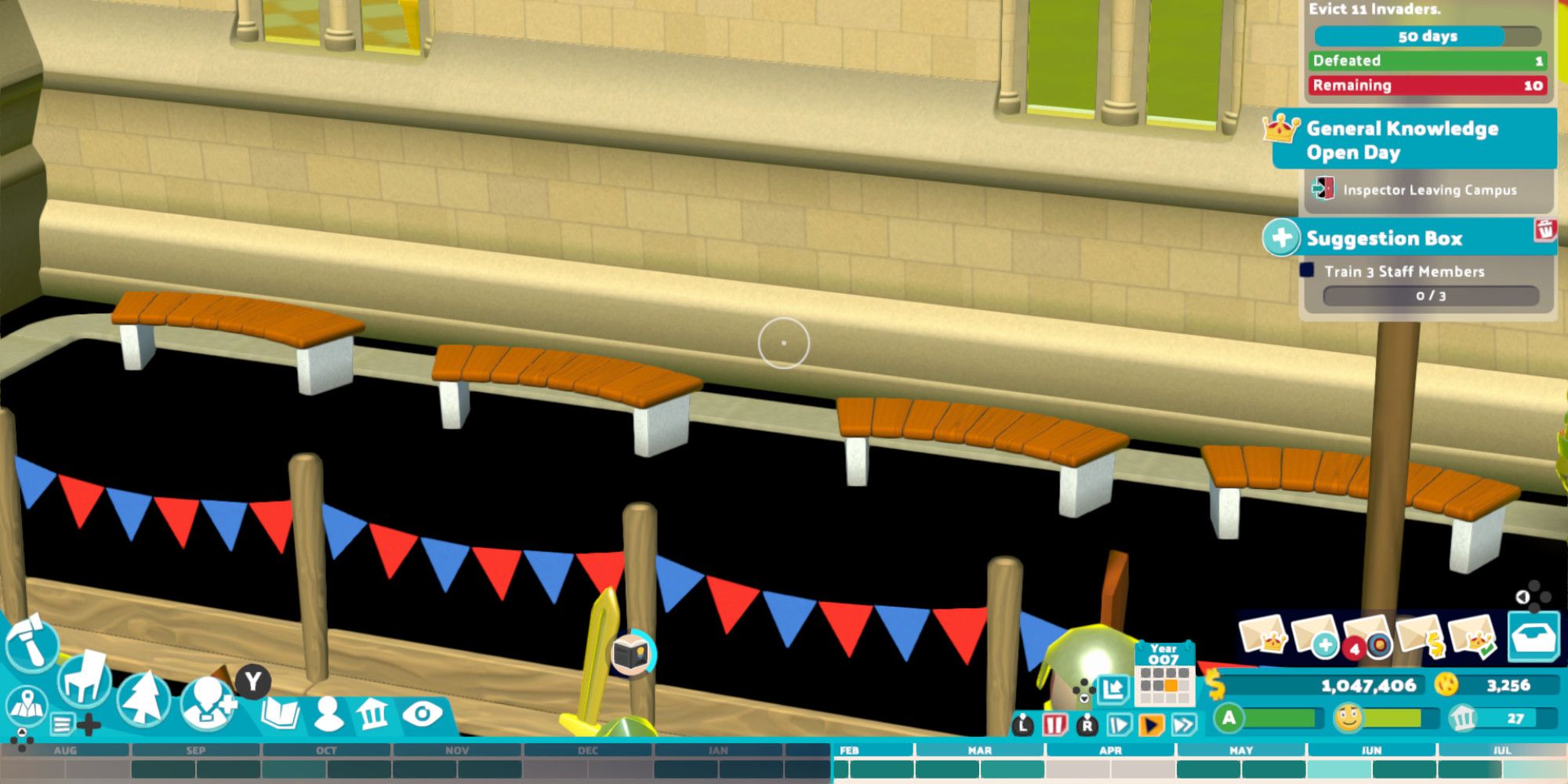 Relationship-related decorations come in many forms, but the main one is the bench — one of the most essential decorations needed around campus. You'll often get mail from students requesting benches, with many supporters backing those requests.

Placing benches helps friendships blossom, leading to relationships being formed that increase the overall campus atmosphere, and your students becoming happier. However, there is another important reason — energy. This is just as important as anything else, and unless your students are sleeping all day, they need some time to rest and sit down on benches. 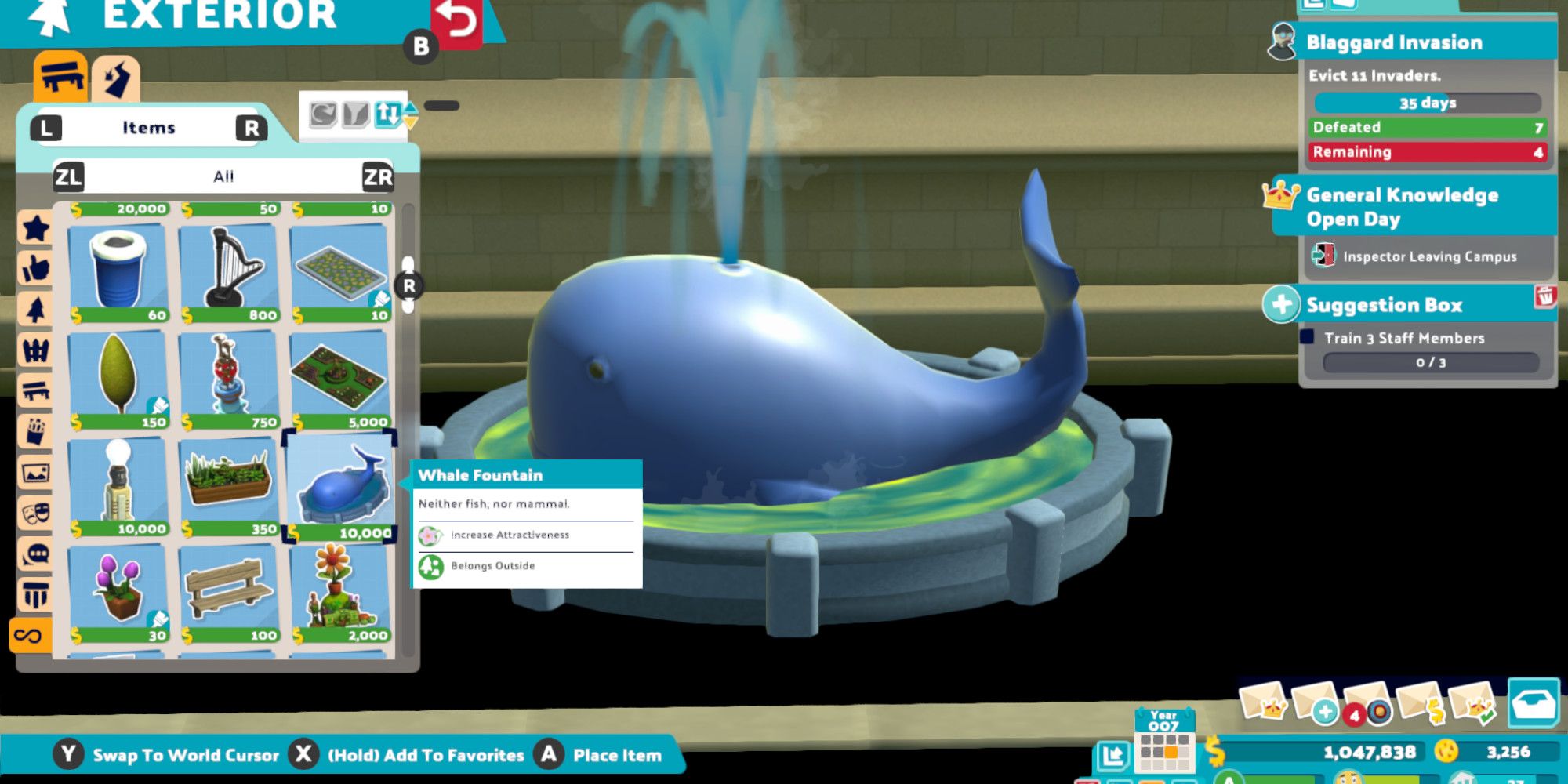 Decorations can vary in price. The cheapest are usually things that add little attraction value and use little space, while the more expensive ones bring a lot of attraction, but use up more space. At least that’s how you'd think the game would make it.

Decorations are typically priced around the same amount, with the only difference being the attraction they bring. Most in the 100 to 500 range will bring the same level of attraction, with some bonuses on top. However, the most expensive ones, at 10,000 plus, are mostly just to show off wealth rather than bringing any benefit. 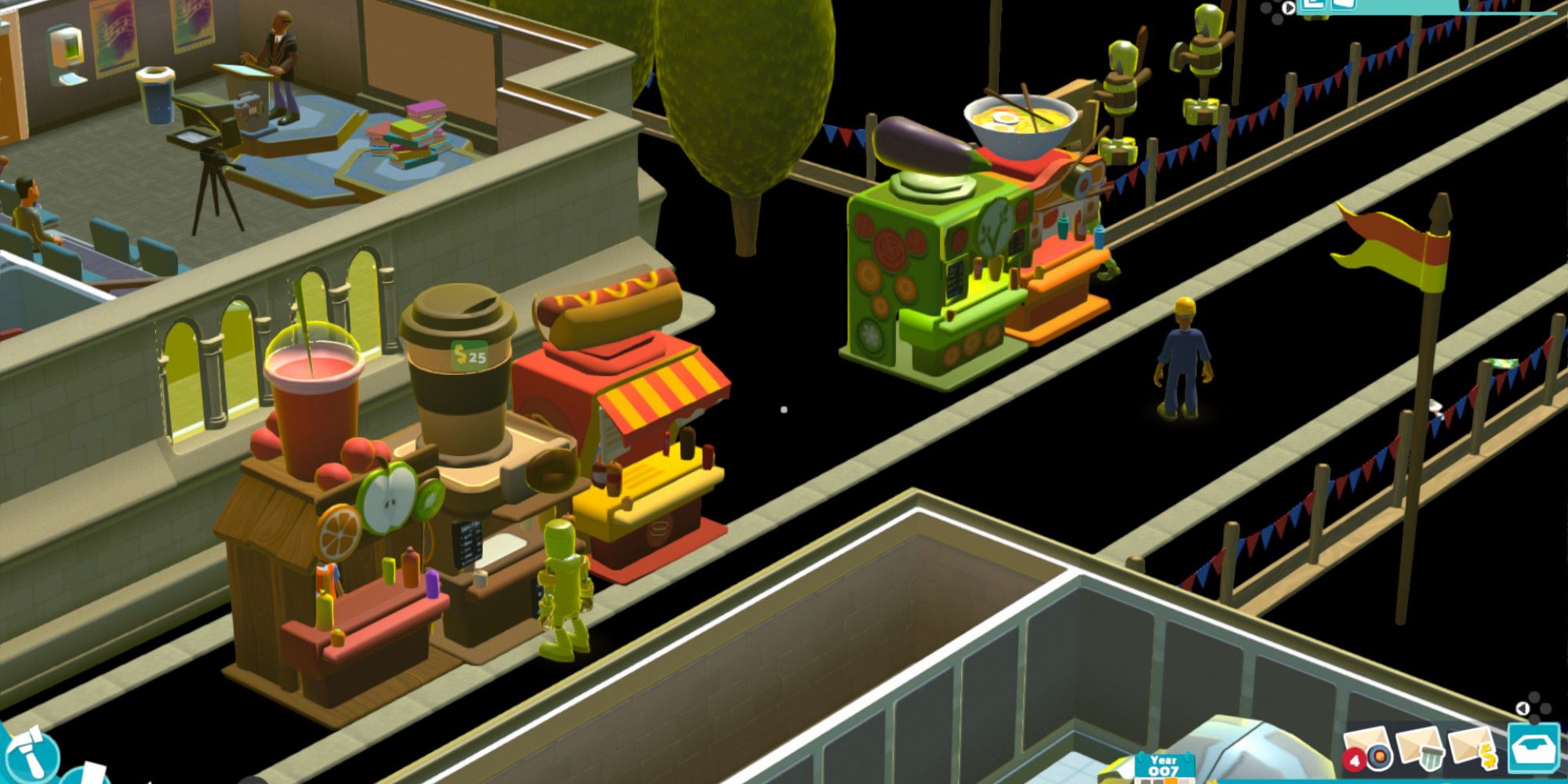 One of the new additions to Two Point Campus is Kiosks. These are food stalls that can be placed inside or outside the campus, and they essentially act as healthier and more profitable alternatives to unhealthy vending machines.

The most optimal way of using kiosks is to place them outside, where student traffic is higher. You can put them inside, but unless you place them in a centralized spot where many people walk, they'll be hugely inefficient. Also, placing them next to vending machines will reduce sales from both, so it’s best to keep vending machines inside and kiosks outside for maximum profits.

4 Keeping Up With Hygiene 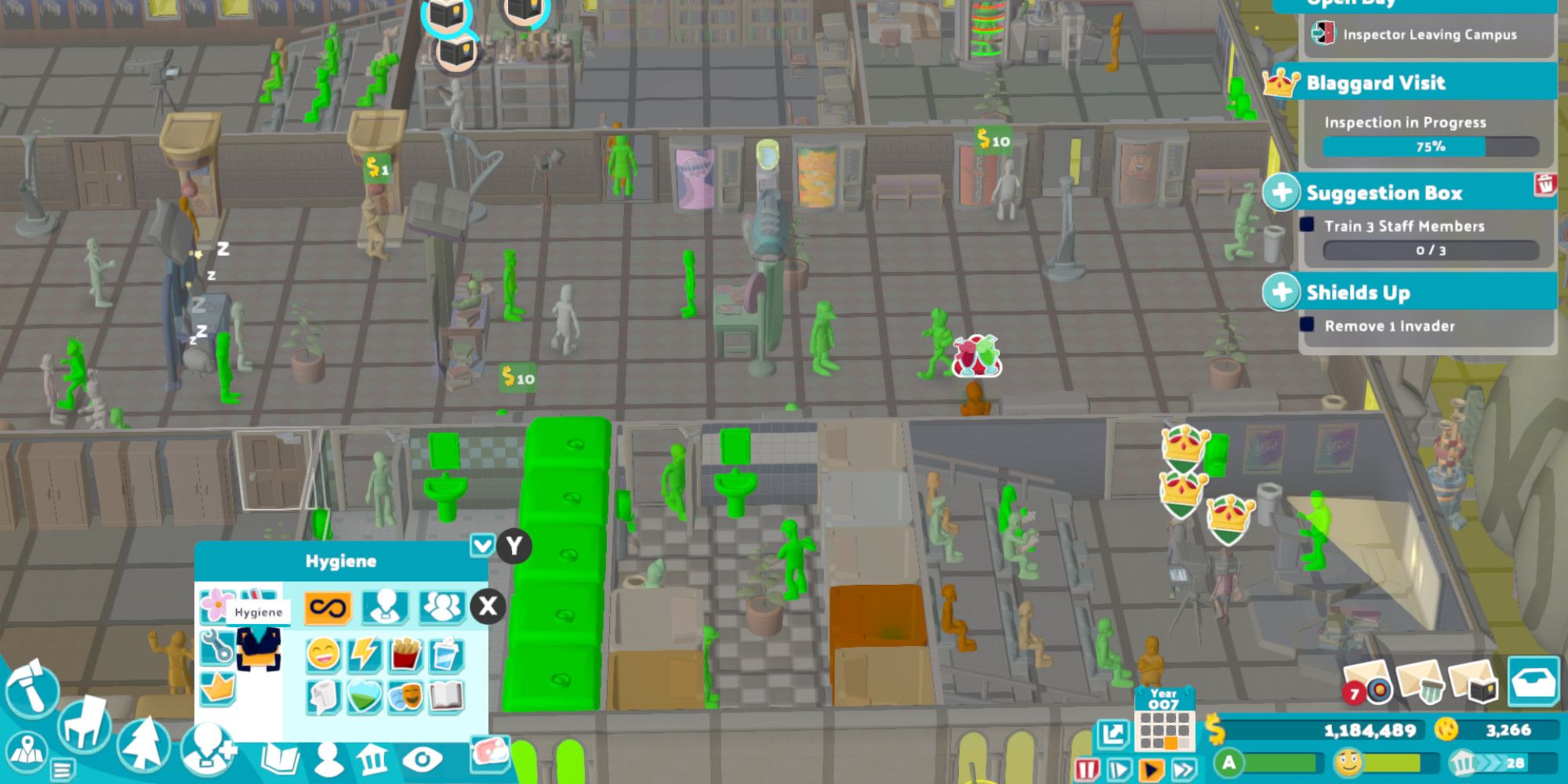 There is a need to always keep hygiene up inside of your campus. The best way to do this is through the inclusion of hygiene-specific decorations, like bins and hand sanitizer. However, that’s not the only thing that matters when keeping up your hygiene.

The most important aspect of hygiene is the spacing of beds in dormitories. Many of you will think to put beds very close together to save room, as space is very scarce. However, placing beds too close together will lower their durability, and cause unhappiness and loss of attractiveness among students. Bins and hand sanitizer should be placed everywhere around the campus, to help keep hygiene up as much as possible. 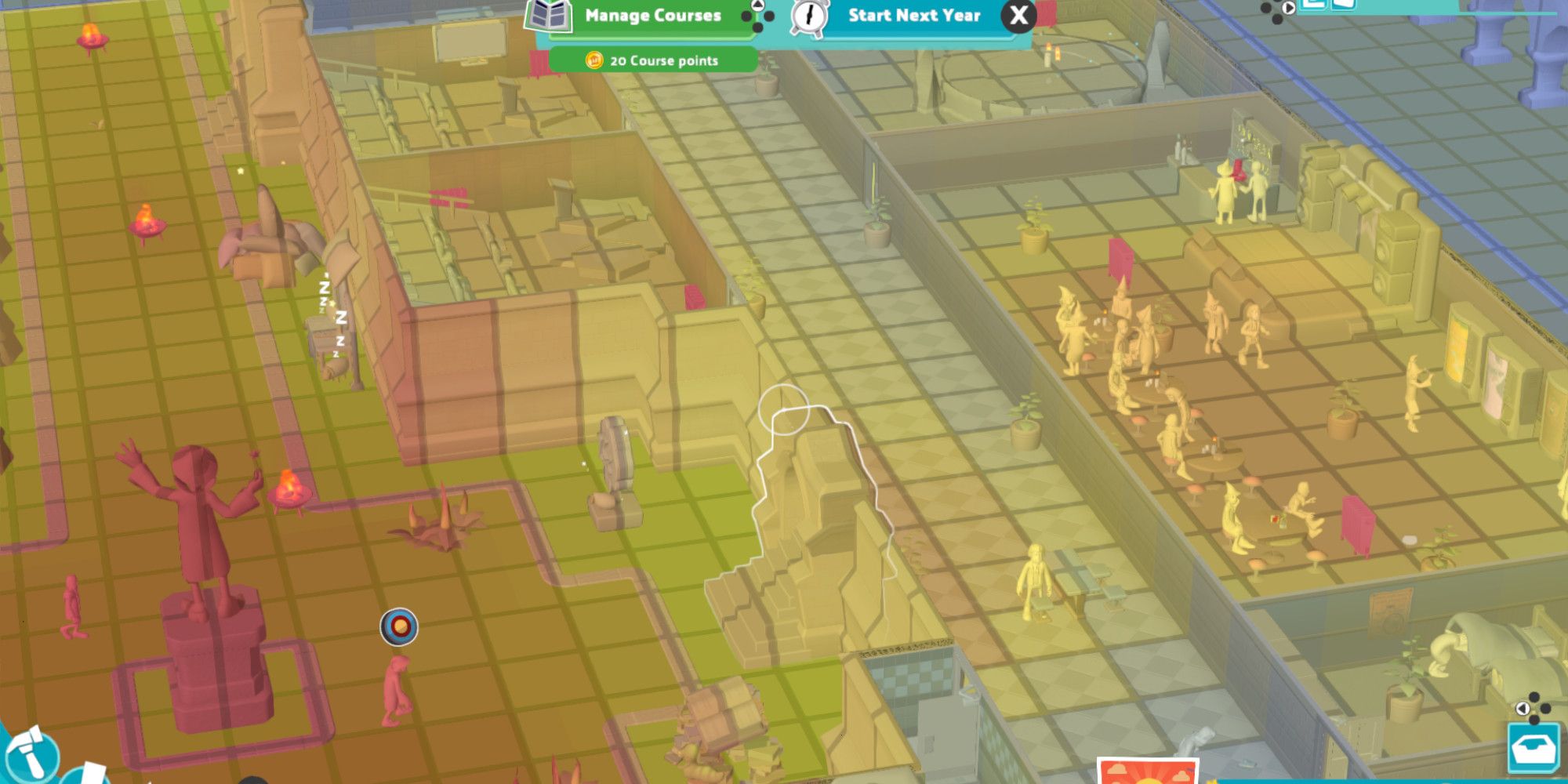 Temperature in Two Point Campus is treated with a ten-foot pole — at least until you reach the fifth and sixth chapters of the campaign. Your students will complain that it’s either too hot or too cold, and you'll require radiators and AC units to raise happiness levels around campus.

When it’s finally introduced, you'll be introduced to basic radiators and AC units. Don't waste your time on these, but instead go into your upgrades and buy the best ones possible. This will save you so much time and money in the long run. It also makes decorating your campus look more reasonable. instead of having to place two or three radiators and AC units in each room. Also, bonfire pits are a great way to heat large areas outdoors. 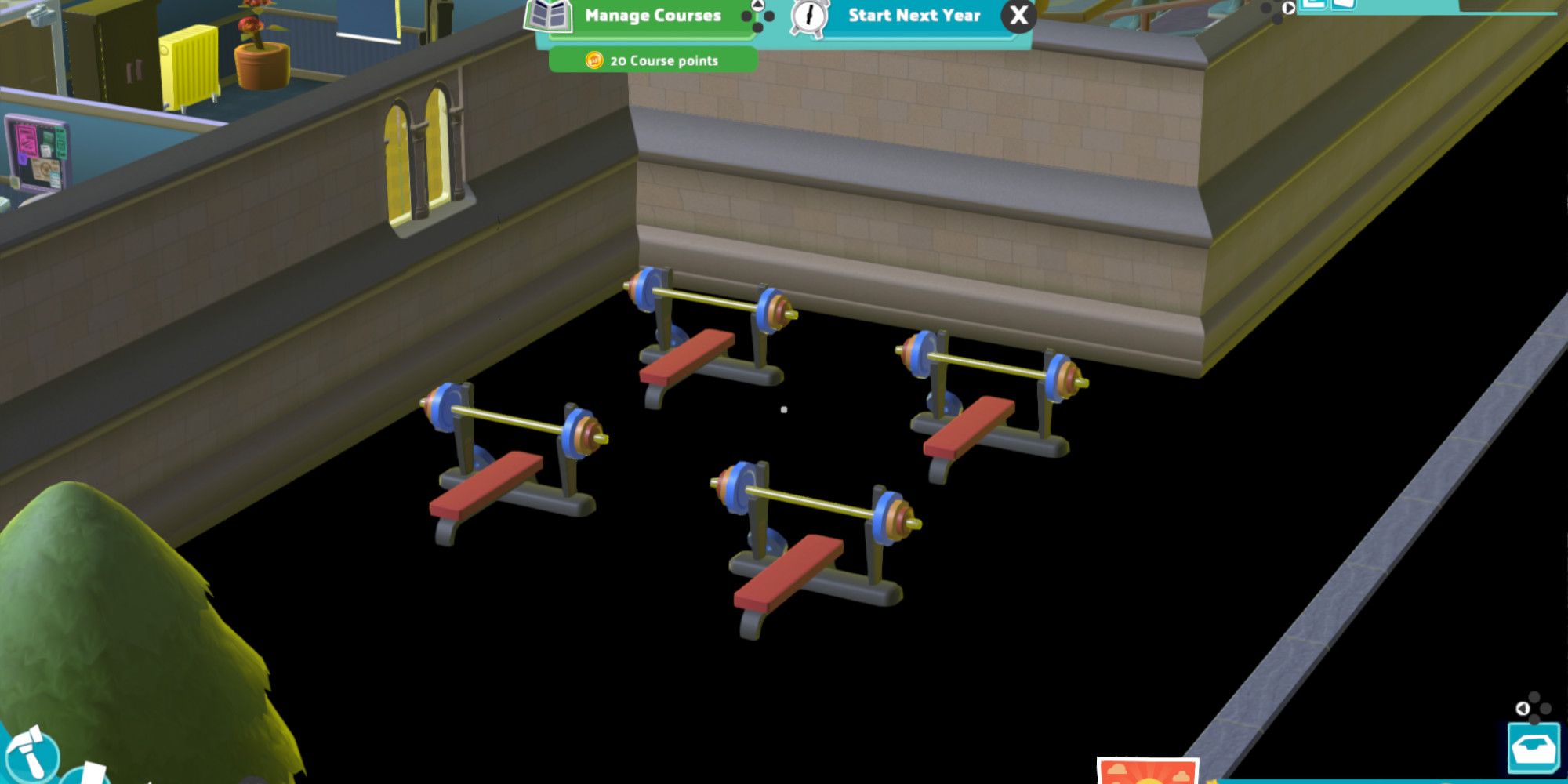 When first playing, there will be decorations with different attributes that you must pay attention to when placing down. Many of these attributes have to deal with attractiveness, hygiene, or something related to food. However, there is one decoration that is often overlooked, and bundled up with kiosks and vending machines.

Healthiness can not be understated when keeping your students happy, and making your campus grounds great to look at and use. It should be absolutely necessary to create fitness areas for your students to exercise. Doing this will make your students healthier with more energy, and they’ll be happier. 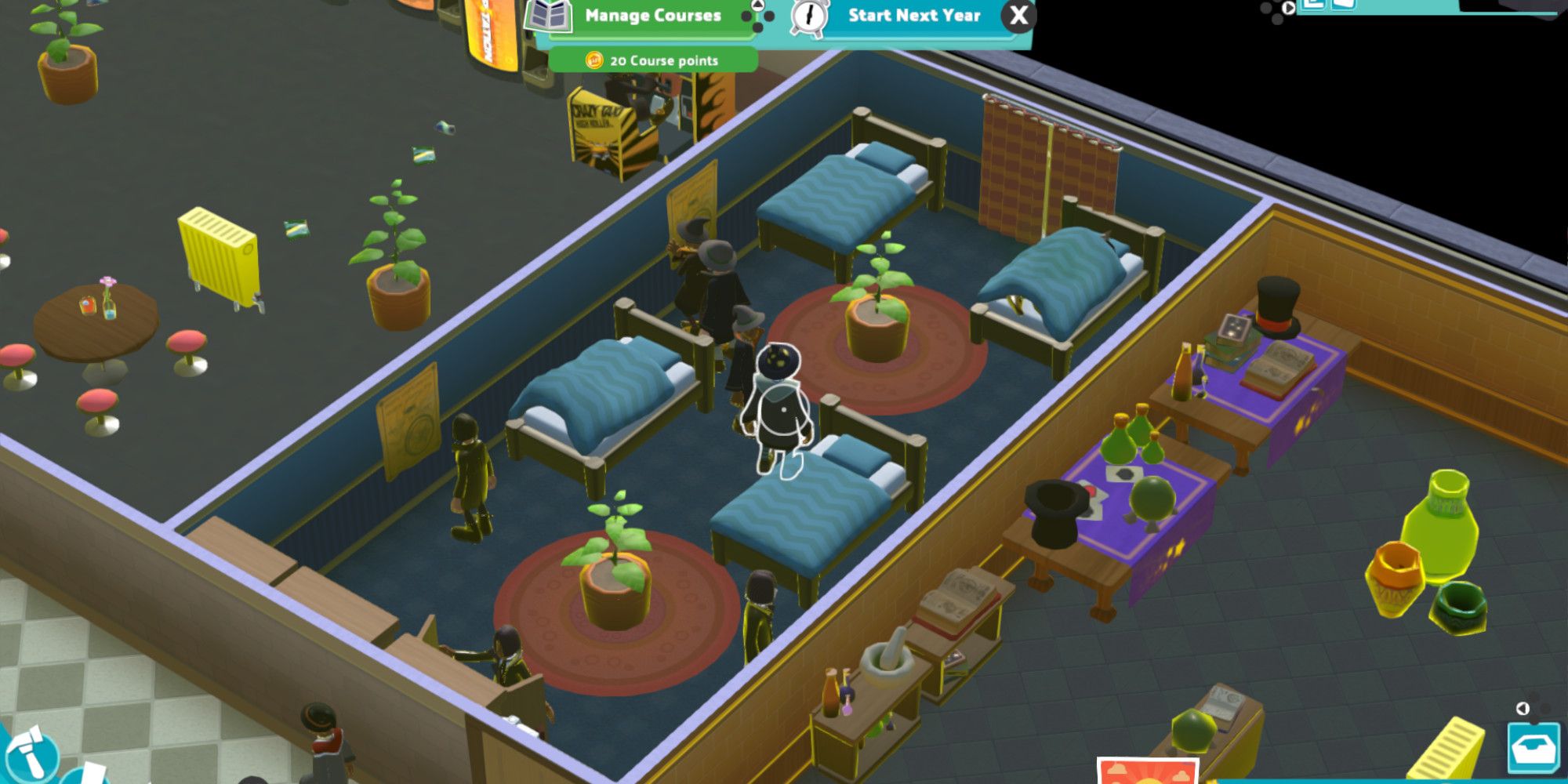 Decorating rooms is a vague subject, but explicitly refers to extra decorations that can go into rooms besides mandatory furniture. This includes things like plants, posters or banners, shelves, tables, and chairs. Among the most overlooked decorations are windows and carpets.

Windows are often sold immediately, due to them becoming invalid objects when setting up rooms, but they provide some valuable bonuses — such as increasing room prestige and attractiveness. Carpets are often misused to fill empty space, but they can also fill used space and be hidden from sight. This leads to your rooms looking good, while increasing attractiveness and prestige.