Are you looking for the best and most cost-effective units for your Total War Warhammer 3 Nurgle campaign? Then look no further than this list! After thoroughly analyzing all 14 Nurgle units in both campaign and custom battles, and on various difficulties, they were compiled into this tier list.

From the S-Tier (superb) to the C-Tier (not recommended), you can use this as a guide when building the perfect army to defeat any stragglers that your plagues haven't already dealt with. And if you do end up in a serious battle, your troops will outlast the enemy and come out on top – if you follow these guidelines, that is. 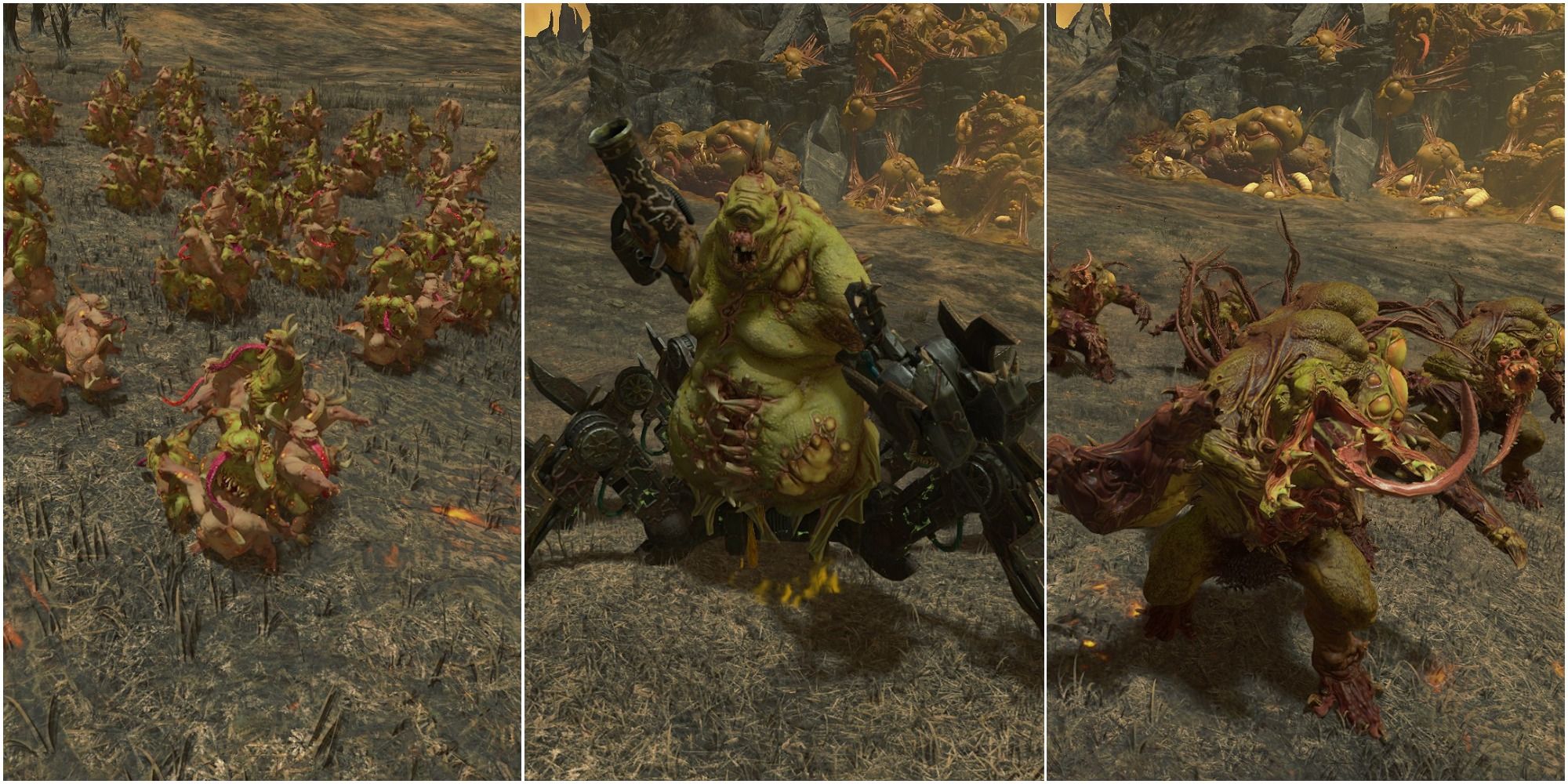 Soul Grinder (Nurgle): the Soul Grinder is normally a tier 5 unit for other Chaos factions, but for Nurgle, you can recruit them with a tier 3 building. This means you can obtain this unit much sooner in the campaign. This is extremely helpful for Nurgle because the Soul Grinder fills an important gap in their roster. It is their only long-range missile unit, with armor-piercing missiles to boot. This means you can use your Soul Grinders to wear down enemies that would otherwise threaten your frontlines, such as elite missile infantry or large units. The Soul Grinder also counts as a siege attacker and can handle itself very well in melee. You should try obtaining this unit as soon as possible.

Nurglings: the goal of Nurgle's army is to reach the enemy, hug them closely, and wait for them to die. For this purpose, a large swarm of Nurglings is exactly what you need. Not only are they cheap, but they are also much tougher than you might think, despite their complete lack of armor. For instance, their Cloud of Flies ability gives them higher melee defense if they are engaged in melee. They also have decent physical resistance and cause fear. All in all, Nurglings are a unit that will surprise you, in a good way.

Spawn of Nurgle: this monster unit is part of the building chain to eventually obtain the Soul Grinder, so you can get it early. The Spawn of Nurgle is unbreakable, has the same Cloud of Flies ability as the Nurglings, and has a large health pool. All in all, this is a good unit to help hold the line, until your plague abilities and attrition do the dirty work for you. 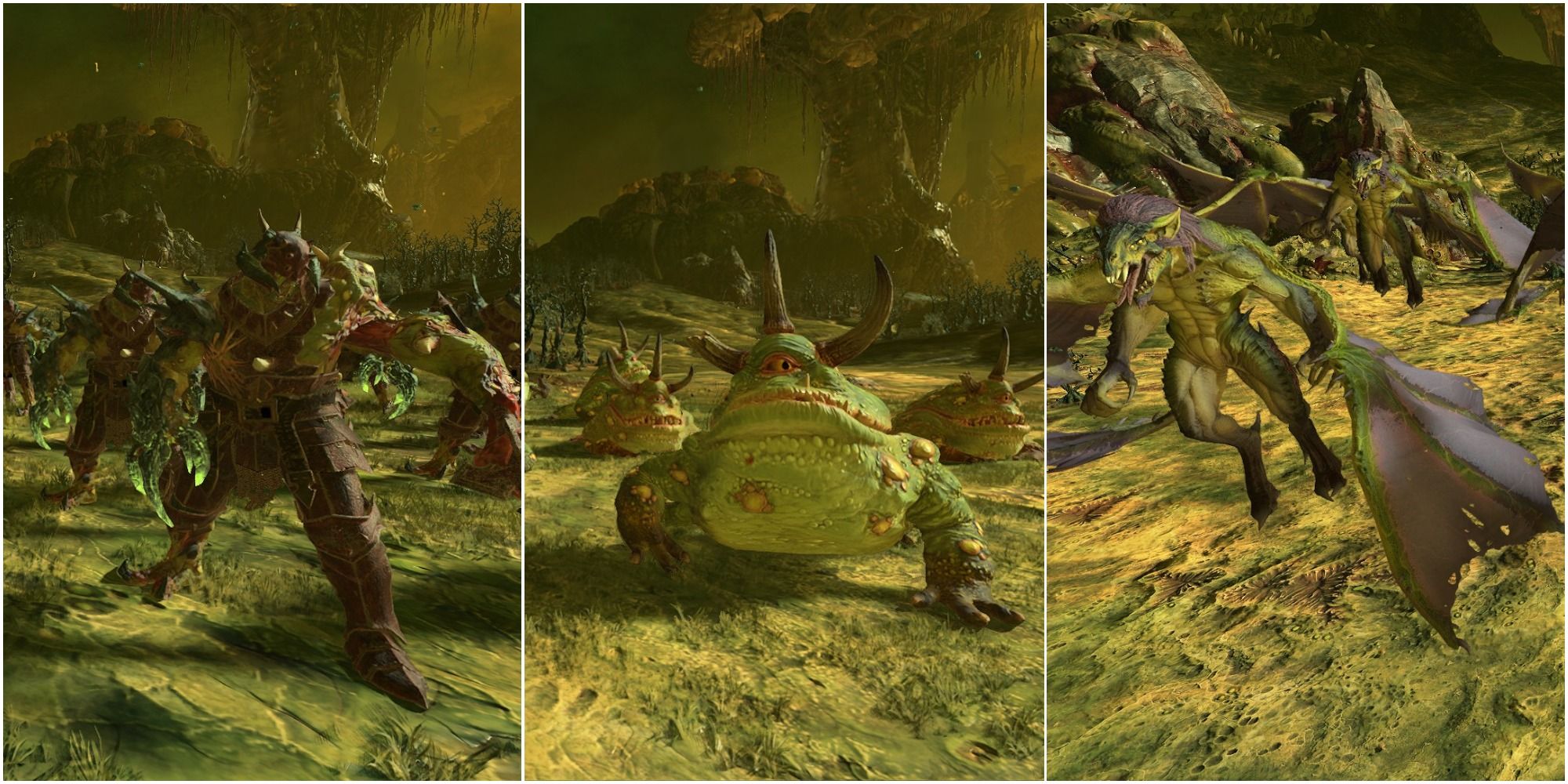 Plaguebearers of Nurgle: these Plaguebearers can be considered an upgrade from Nurglings, although their speed is lower. The question is whether Nurglings need an upgrade at all. Plaguebearers are a bit better than Nurglings at staying alive in a protracted melee. On the other hand, they will have a harder time catching up to enemies due to their lower speed. They are also vulnerable to enemy armies consisting of lots of missile units. Nurglings (and Furies) work better in that case for pure overwhelming tactics.

Forsaken of Nurgle: Like the Spawn of Nurgle, this unit is part of the building chain leading to the Soul Grinder. It has low melee defense, so it should not be used to hold the line. It does have good speed and decent attack and armor, which Nurgle units usually lack. Therefore, it is very useful to have a few of these on hand, to close the gap to threats that your slower units cannot reach.

Chaos Furies (Nurgle): Chaos Furies are very cost-effective and essential for your army. This flying unit is extremely fast, which you'll need because most of your units are slow as toads. The Chaos Furies also have the benefit of attacking with poison damage. All in all, Chaos Furies play a vital role to take out enemy artillery and harass enemy missile units.

Plague Toads of Nurgle: these war beasts are surprisingly good to close the gap to the enemy army. With their magical and poison attacks, they pack a punch. They can also be used to flank or to harass the enemy missile line. Having two of these units on hand gives you more flexibility across the board.

Rot Flies: Rot Flies are one of the best-designed units in the Nurgle roster, and they are also surprisingly effective. Their main benefit is that they deal high armor-piercing damage, which Nurgle's roster is overall lacking in. Rot Flies can be used to harass enemy artillery and missile units, but are also good counters to deal with enemy cavalry or flying units. 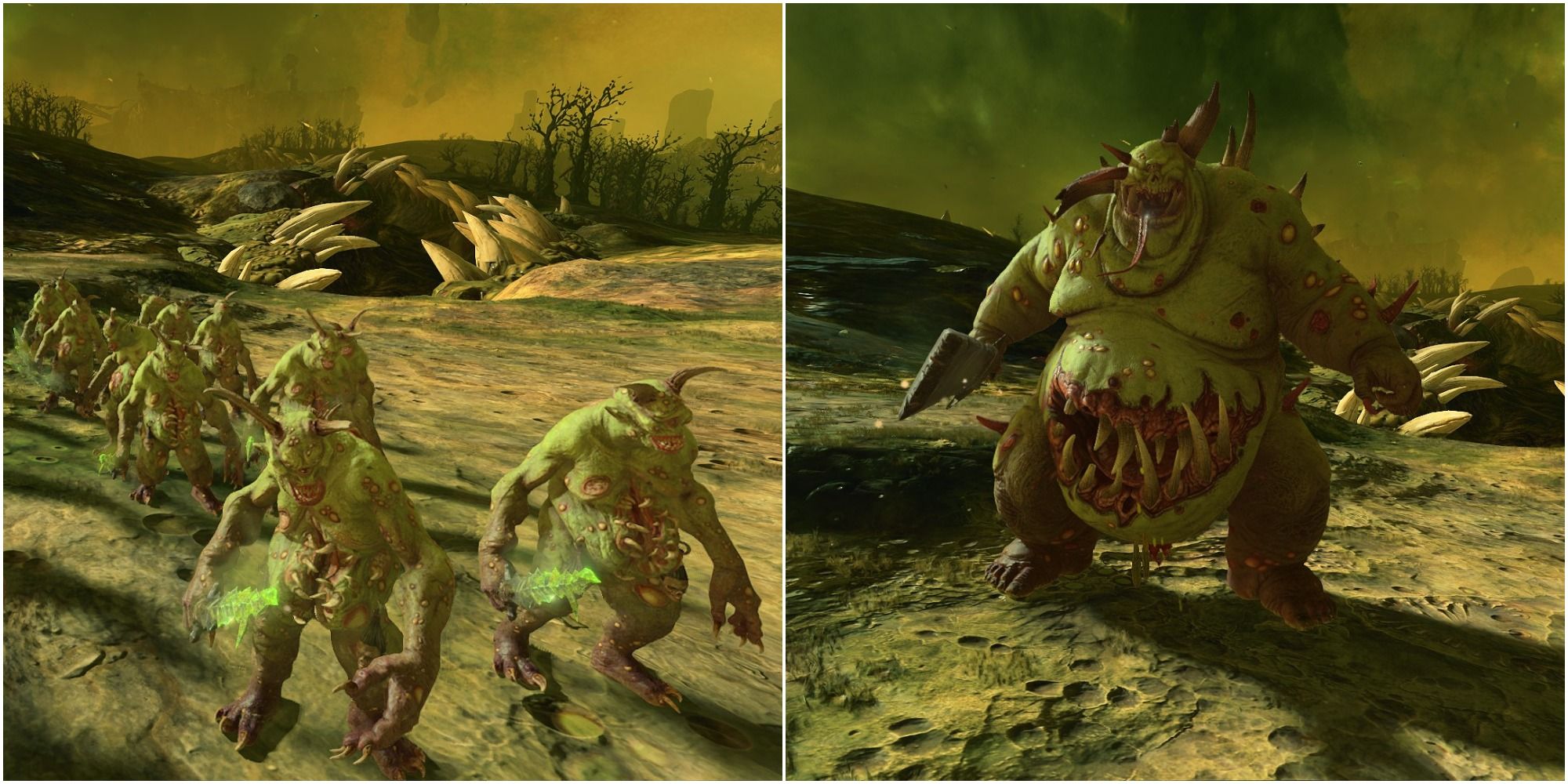 Plague Drones of Nurgle (Death's Heads): this Death's Heads variant of Plague Drones is quite interesting due to their missile attack. Nurgle's army is very lacking in that department, so any unit that comes with a ranged ability is automatically worth consideration. These Death's Heads Plague Drones deal armor-piercing damage and can be a decent counter against large units. If you are pursuing a Nurgle army composition with aerial superiority (meaning various Chaos Furies and Rot Flies), then this unit jumps up to A-Tier. 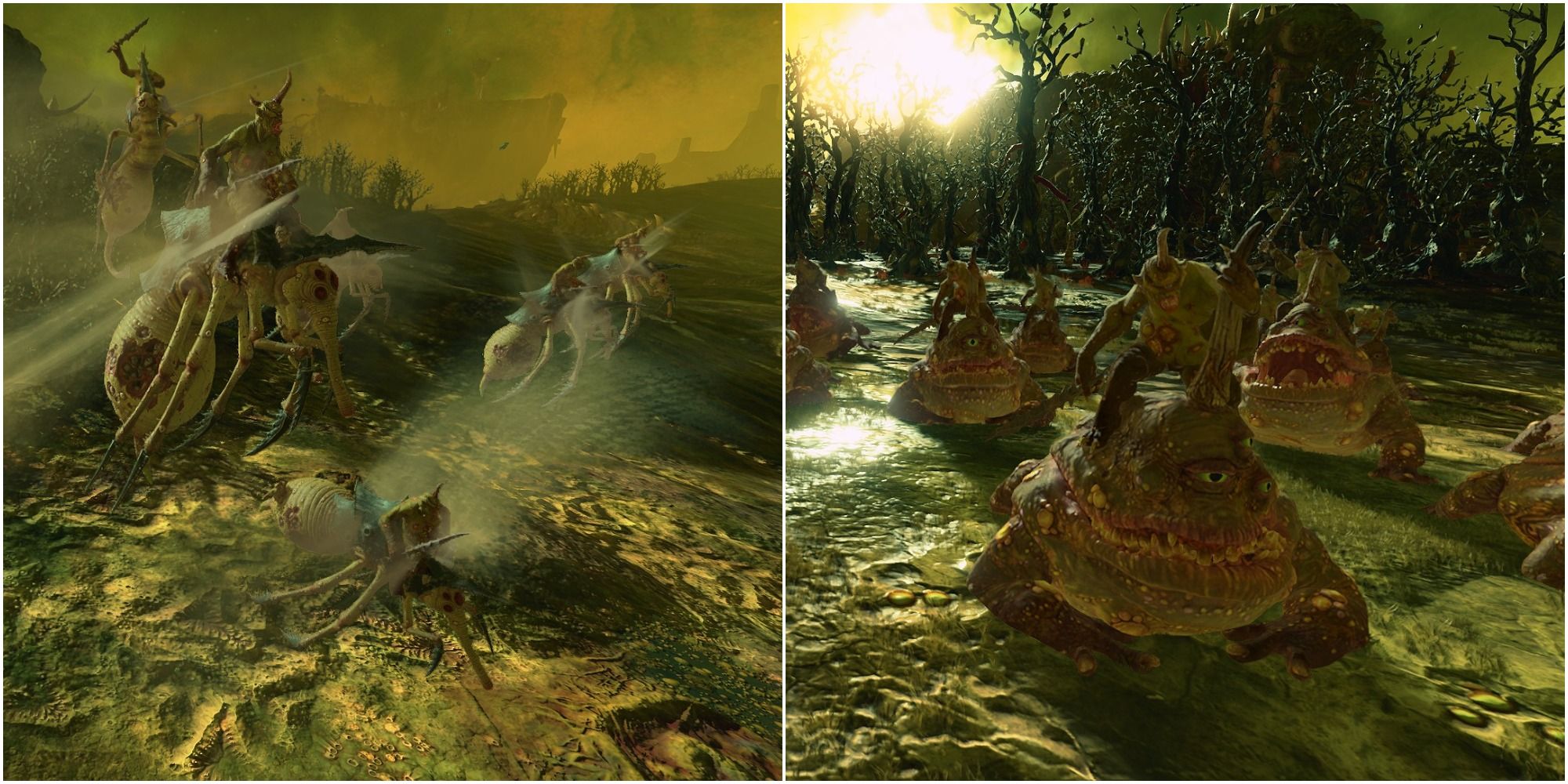 Pox Riders of Nurgle: the Pox Riders are an upgrade from Plague Toads but do not add enough to justify the cost increase. If you are swimming in cash, other upgrades should be considered first. So, there is no reason to include this unit in your army, unless you like their design. But then again, all of Nurgle's units are exceptionally well-designed.

Plague Drones of Nurgle: these Plague Drones are a minor upgrade of the Rot Flies but not as cost-effective. Much like the Pox Riders of Nurgle, there are other upgrades to consider first, or extra armies to raise. If you are still rolling in cash, only then it would make sense to upgrade from Rot Flies to Plague Drones.