While rewatching The Nightmare Before Christmas last night, I was struck by how similar some of the compositions in Henry Selick’s stop-motion film are to the screens you would see in a point-and-click adventure game.

Neither Christmas Town or Halloween Town feel, fully, like a place where you could actually live, but they do feel well-realized enough to be settings in a point-and-click adventure. While mainstream series like Resident Evil and Final Fantasy — which once created striking tableaus through their use of pre-rendered backgrounds and locked camera angles — abandoned fixed perspective decades ago, point-and-click adventure games are still holding down the fort. I’m currently playing Return to Monkey Island and Pentiment and, while those games are, mechanically, very different, they share a commitment to using fixed camera angles to create locations that are memorable, in part, because you only see them from one perspective.

In Monkey Island, the Island of Melee is a series of screens presented from the point of view that will best show off that specific location — you sidescroll along the boardwalk, but the camera switches to a high, wide angle when you get to the town — stitched together to approximate a larger place. In a game like Red Dead Redemption 2, you can travel from Saint Denis to Strawberry without hitting a loading screen, so the whole world has to fit together as a believable, coherent place. But, point-and-click developers, like filmmakers, can carefully compose and select their shots. 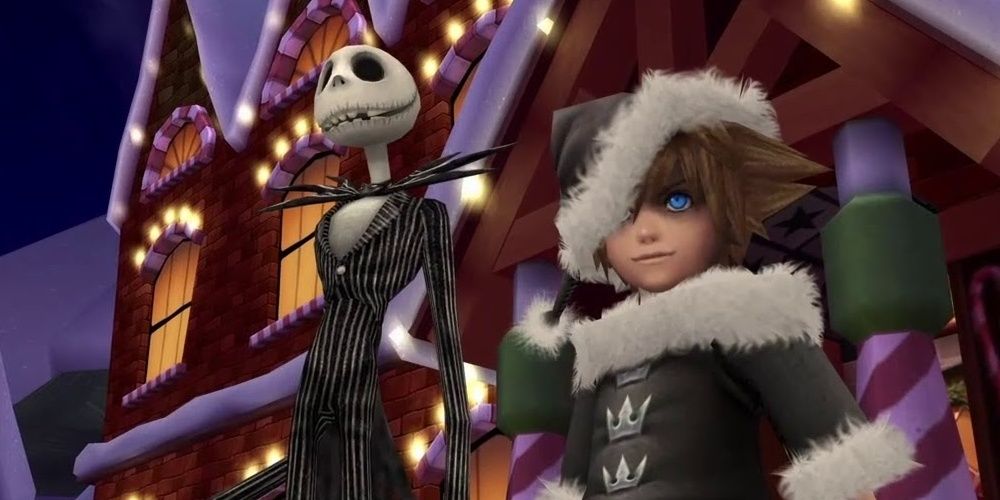 As a result, there are a fair amount of static shots in The Nightmare Before Christmas that could be transplanted into a game with minimal edits. You would need to remove the characters and replace them with the player character and the necessary NPCs. But, otherwise, much of the film can be moved into game form untouched. Plus, Jack and Sally already have iconic designs that wouldn’t need any major changes to fit a point-and-click game.

Beyond aesthetics, the tasks that Jack, Sally, Lock, Shock, and Barrel have to accomplish all could map well to point-and-click mechanics. As in the movie, Sally could want to put a soporific in Dr. Finkelstein’s soup. To do that, she needs to acquire the sleeping drug, then another material which disguises its scent. Then, she could take the ingredients to the kitchen and combine them with the soup. But, all of that would be for naught if she couldn’t convince him to eat it. So, Sally would also need to find or craft a spoon with holes in it, so she could believably fake a bite. Similarly, Sally would later need to make a Santa suit for Jack, and that would require finding a template and collecting all the right fabric. Similarly, Lock, Shock, and Barrel could need to infiltrate Christmas Town and kidnap Santa Claus without being seen. Or, Jack could need to find the proper presents — “proper” being a relative term — to take on his sleigh ride on Christmas Eve.

Of course, the developers could come up with plenty of small tasks to flesh out Halloween Town and Christmas Town beyond the amount we’re able to see in the fairly short film. But, the main thing is that, in keeping with Selick and Burton's stellar work on the film, it would look good. It needs an aesthetic fit for a Pumpkin King. And to achieve that, like Jack in the film, it wouldn't need to change much.