The Dark Pictures Anthology: The Devil In Me: Crew – Scene Walkthrough

After you’ve seen the gruesome prologue chapter of The Dark Pictures Anthology: The Devil in Me, you’re segued into your meet-and-greet with this installment’s collection of five player characters. The introductions come in the form of choppy behind-the-scenes footage for Lonnit Entertainment’s newest true-crime show, giving you a peek into who you’ll be controlling in this mystery.

Since there’s not much to choose from in this scene, we wanted to use it as a chance to introduce you to your characters for this game. We’ll keep it as spoiler-free as possible for you, too — blind playthroughs are usually the best.

This scene is notedly one of the shorter in the game, and it features no choices to be made. It's a fully cinematic scene setting up the lore of the game, but we wanted to include it for completion. 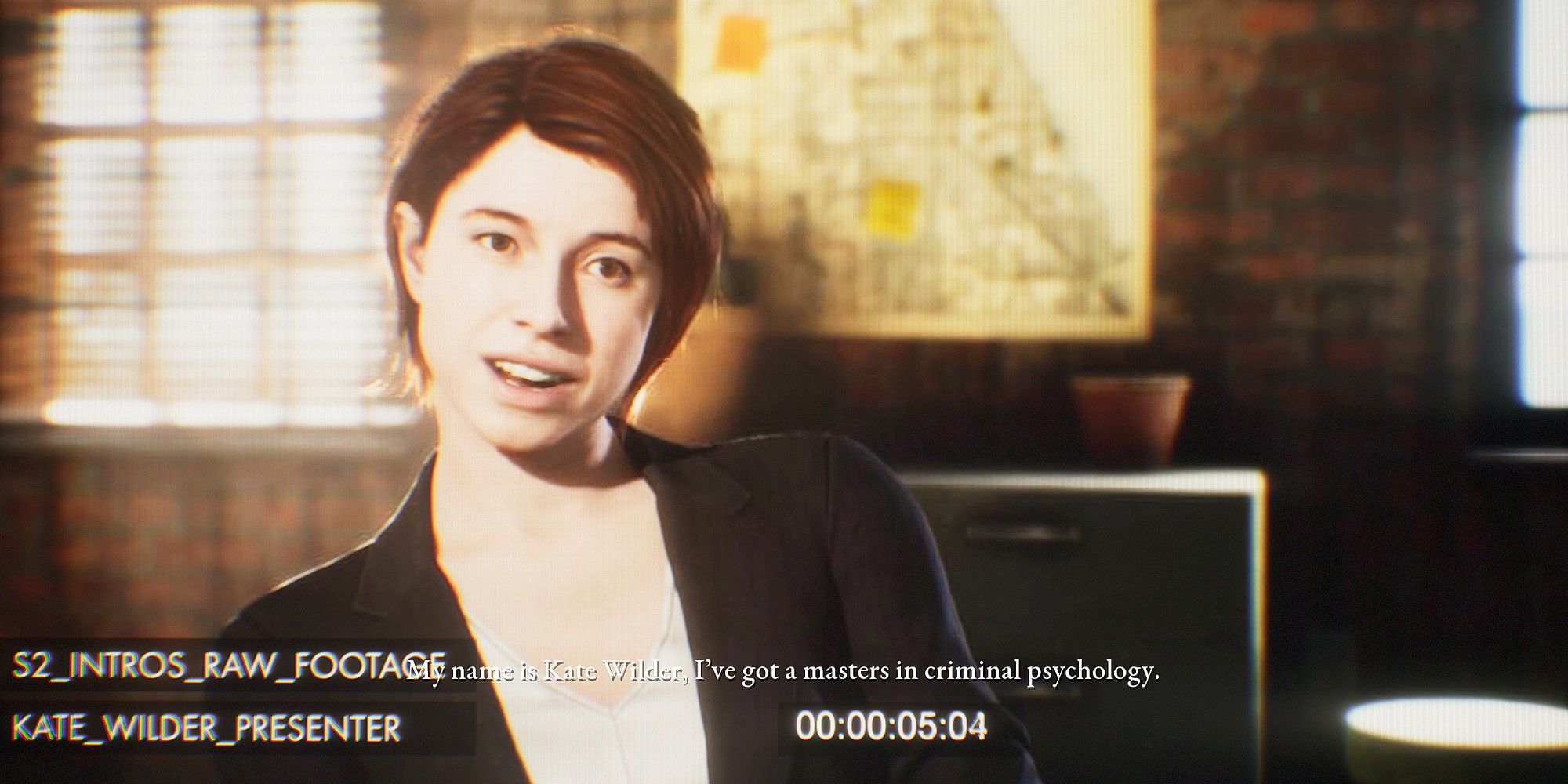 Kate is the first protagonist that you meet in the behind-the-scenes film reel. She’s the young woman with red hair who seems annoyed from the get-go, and her role with Lonnit Entertainment is hosting "Architects of Murder," the show for which they're trying to film another episode at the Murder Castle.

The game describes her to be ambitious, notedly bold, and relatively anxious — not only does she want to survive, but she wants this show to do well. Dry in her deliveries and short in conversation, Kate seems to have a lot riding on this show.

A longtime true crime investigative journalist and on-camera personality, Kate is no stranger to digging into gruesome history. An Easter egg from Little Hope was that Kate’s name is printed on one of the clues you can find — the Old Magazine, describing how Little Hope came to be a ghost town. There’s a television advert in the bottom for “Architects of Murder”, in which she’s looking for the Zodiac Killer in San Francisco. 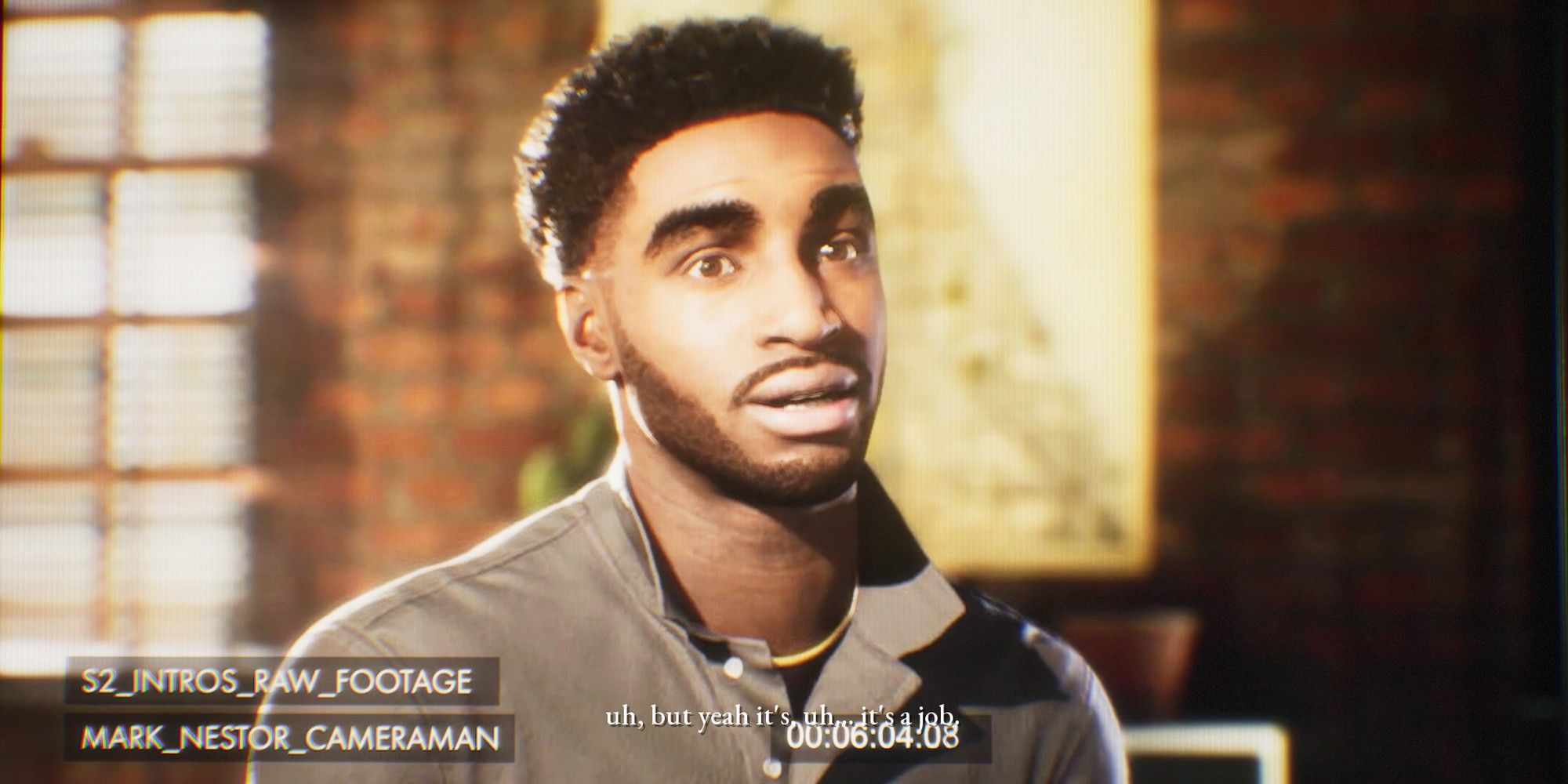 Mark is up next in your roster for this game, the faithful cameraman filming Lonnit Entertainment’s newest venture. While you only play as him in one scene of the game, he’s present in several of them, although he seems to get buried quite often by the bolder personalities in the group. He’s got a degree in photography and sheepishly admits to wanting to work on bigger, better projects.

Sincere in all things and protective of those he loves, Mark seems like a heartwarmingly nice guy. You learn not long after this scene that he’s recently broken up with Kate, which she suggests is due to the immaturity he’s described to struggle with. Worth remembering, he has a severe fear of heights. 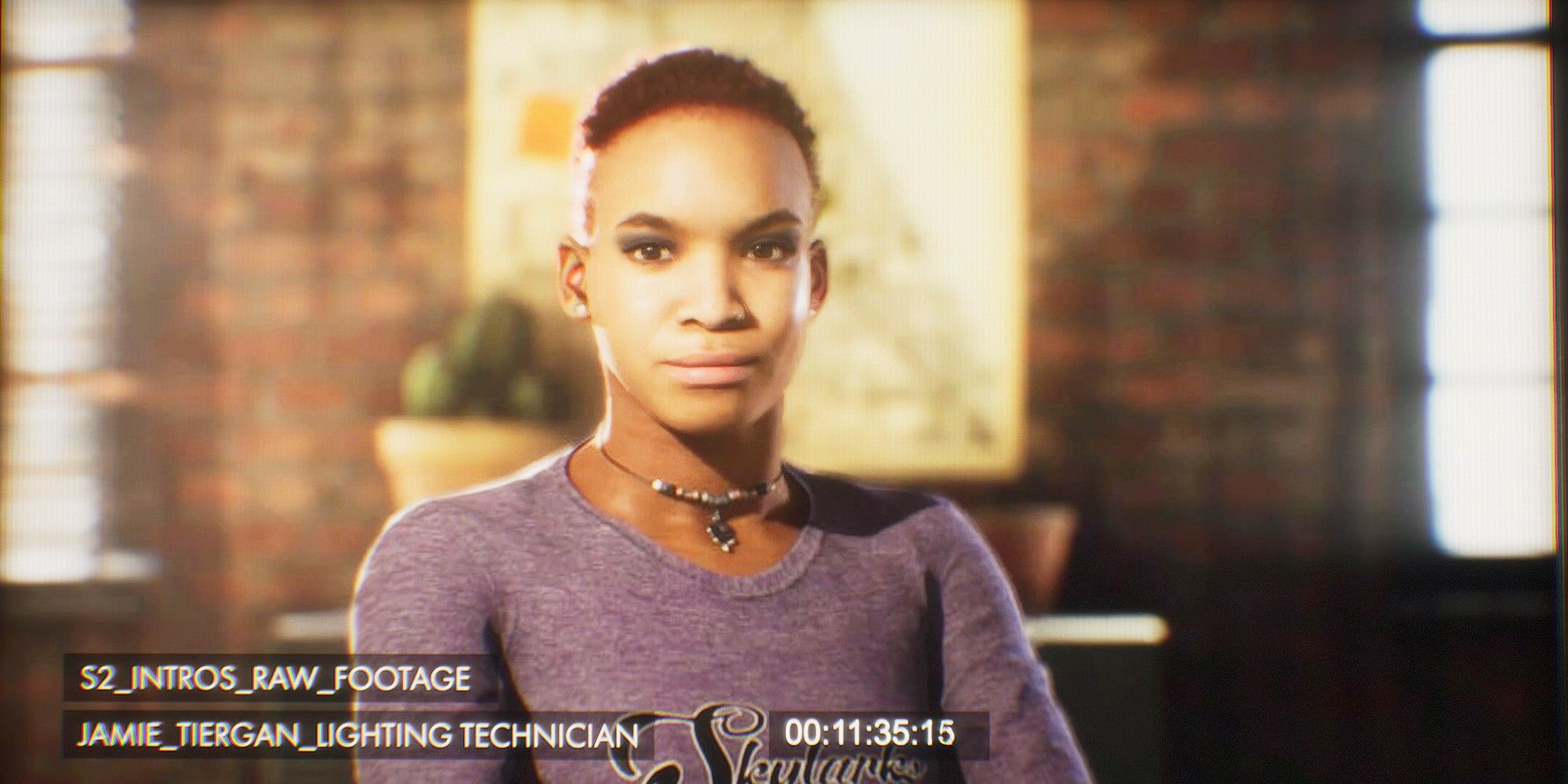 Jamie, the snide, short-haired Black girl, is the key grip for the crew, responsible for rigging all the cameras and lighting for Lonnit Entertainment films. Fans of the Anthology have been excited for her inclusion because she’s Supermassive’s first confirmed LGBT+ character, and if you play the game a certain way, she’s rather interested in Erin, another member of the crew.

You get the idea pretty much as soon as you meet her that Jamie is the snarky one of the group. She’s irritable the very first time you meet her, and the echoes of that follow her throughout the game. She’s described to be bitingly witty, stubborn in all things, and purposely antagonistic. She was seen in the gold-framed picture in House of Ashes, which depicted Charlie burning alive as Jamie watches on in horror. 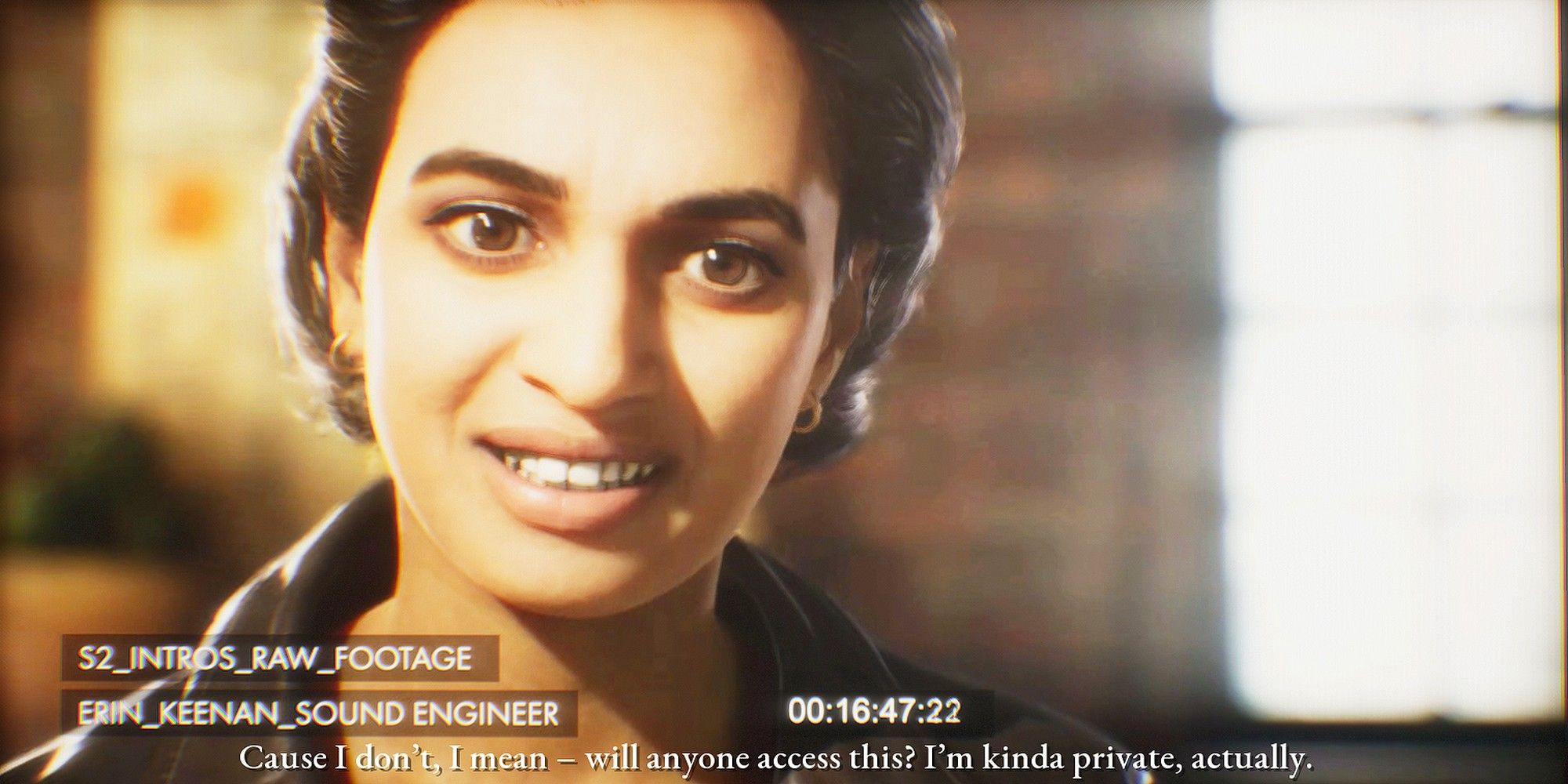 While she’s currently only an intern with Lonnit Entertainment, Erin is using this opportunity to learn more about sound engineering. She’s in her early to mid-20s and is eager to get her foot in the door in the entertainment business. She seems to struggle with viewing herself as a professional as a side-effect of her self-esteem issues, stumbling over her filmed intro with uncertainty in every word.

It lends to the game describing her as timid very well, and you see this bashfulness present itself several times throughout the game. However, Erin is willing to do what needs to be done, diplomatic and amiable in all dealings. One thing you’ll need to watch out for with her is her asthma, for which she has an Albuterol inhaler as one of her items. 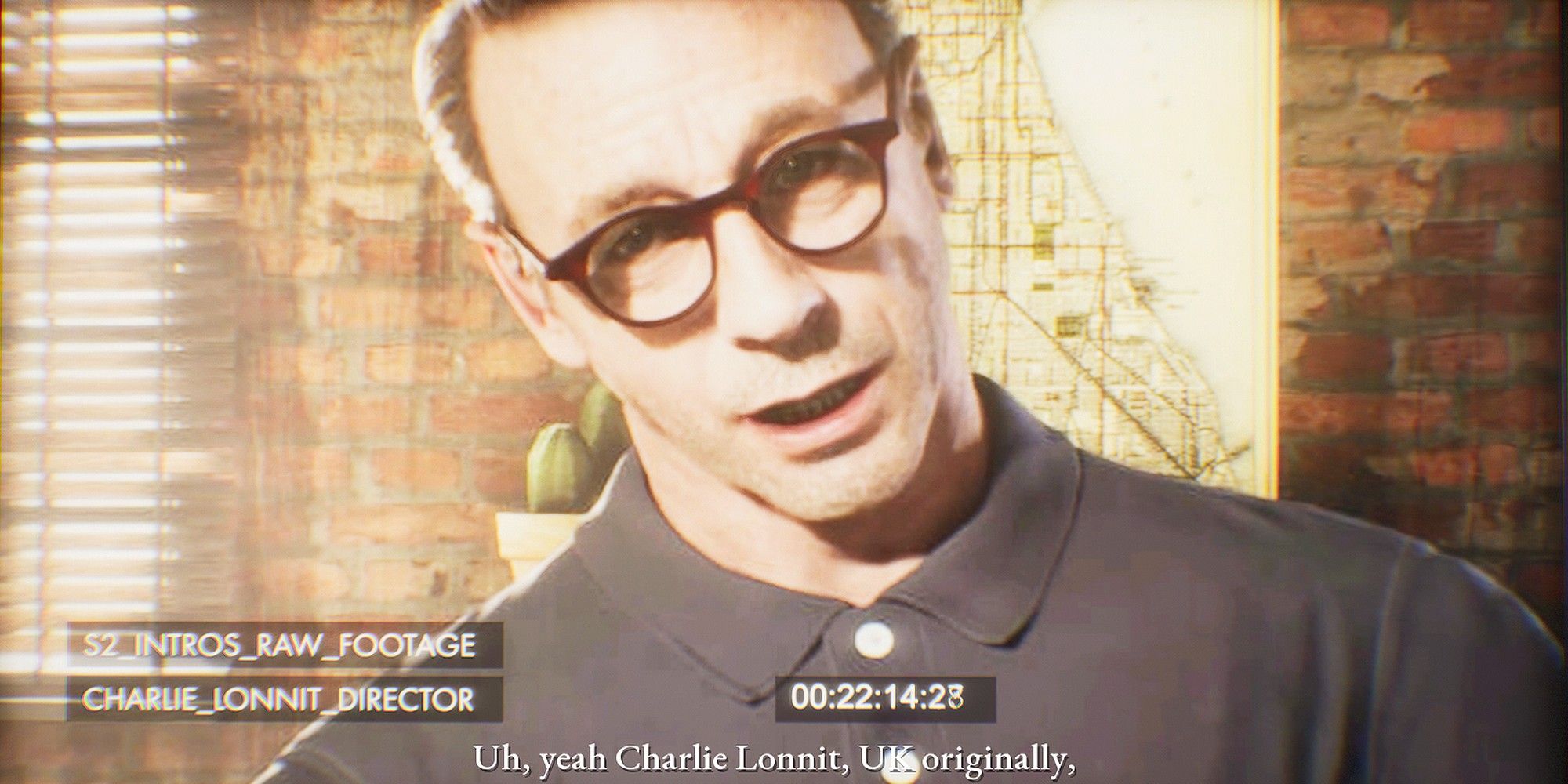 Unquestioningly the strongest personality in the group, Charlie is the founder of Lonnit Entertainment and is currently working in a directorial role on“Architects of Murder.” He’s down on his luck and while he remains obviously proud of his own work, he’s frustrated that it doesn’t seem to be getting the attention he thinks it deserves. At 49, he’s currently the oldest protagonist of a Dark Pictures game.

He’s the one who got the call about going to the Murder Castle, accepting it with almost no prep time and limited description in a desperate bid to keep the company afloat and continue pursuing his dreams. While he can be glaringly cynical and overbearing, it’s pretty clear that Charlie does care a lot about the people he employs, even when they doubt his affection.

Along with Jamie, he was teased in the gold-framed picture in House of Ashes, wherein she watched him burn to death as a preview of this game. Through your decision-making, you may be able to help him avoid this fate.