Marvel’s Spider-Man begins with an assault on Fisk Tower. Spidey fights his way up the skyscraper while taking out dozens of Kingpin’s goons along the way, and when he reaches the top he meets up with a police bomb squad meant to help him detain Fisk. To Spider-Man’s surprise, the cops are working for the Kingpin. Spidey subdues them and calls his police contact, Yuri Watanabe, to let her know that some of her men were on the take. Yuri doesn’t react to this news and corruption within the police force is never addressed again. There were a few bad apples that tried to kill Spider-Man, and that’s all there is to it. From that point forward, the police are only represented as trustworthy allies to Spider-Man, and vice versa, despite the first mission explicitly showing us that they’re not.

I’m far from the first person to point out the copaganda problem in Marvel’s Spider-Man, but while reviewing the PC port I couldn’t but help fixate on these moments, like the crooked bomb squad in Fisk’s tower, and how they inform the kind of person this Spider-Man is. There’s a pervasive neoliberal ideology throughout Marvel’s Spider-Man that’s difficult to ignore and impossible to reconcile, considering Spider-Man’s history as a working class hero. Spider-Man is fiercely loyal to institutions, like the police, and an enforcer of the status quo. Despite experiencing a near-constant stream of evidence of systemic failure, Spider-Man sees crime and villainy as a problem created by individuals – a few bad apples across the Big Apple.

It’s shocking when, shortly after surviving a cop ambush, Spidey almost immediately gets to work repairing high-tech scanners at police stations around NYC. When Batman used similar technology to hunt down the Joker at the end of The Dark Knight, Lucius Fox is so disturbed by the attack on public privacy he threatens to resign. In Marvel’s Spider-Man, Spidey is happy to give the police department – who just tried to kill him – the ability to surveil everyone in the city. The only person who is critical of this is J. Jonah Jameson on his radio show Just The Facts. He calls the system Orwellian and a violation of civil liberties, and it is. Jameson spends the rest of the game doing an Alex Jones impression by screaming conspiracy theories and spewing vitriol about Spider-Man. Every time he speaks the game is reminding us that his perspective isn’t one we should ever consider. 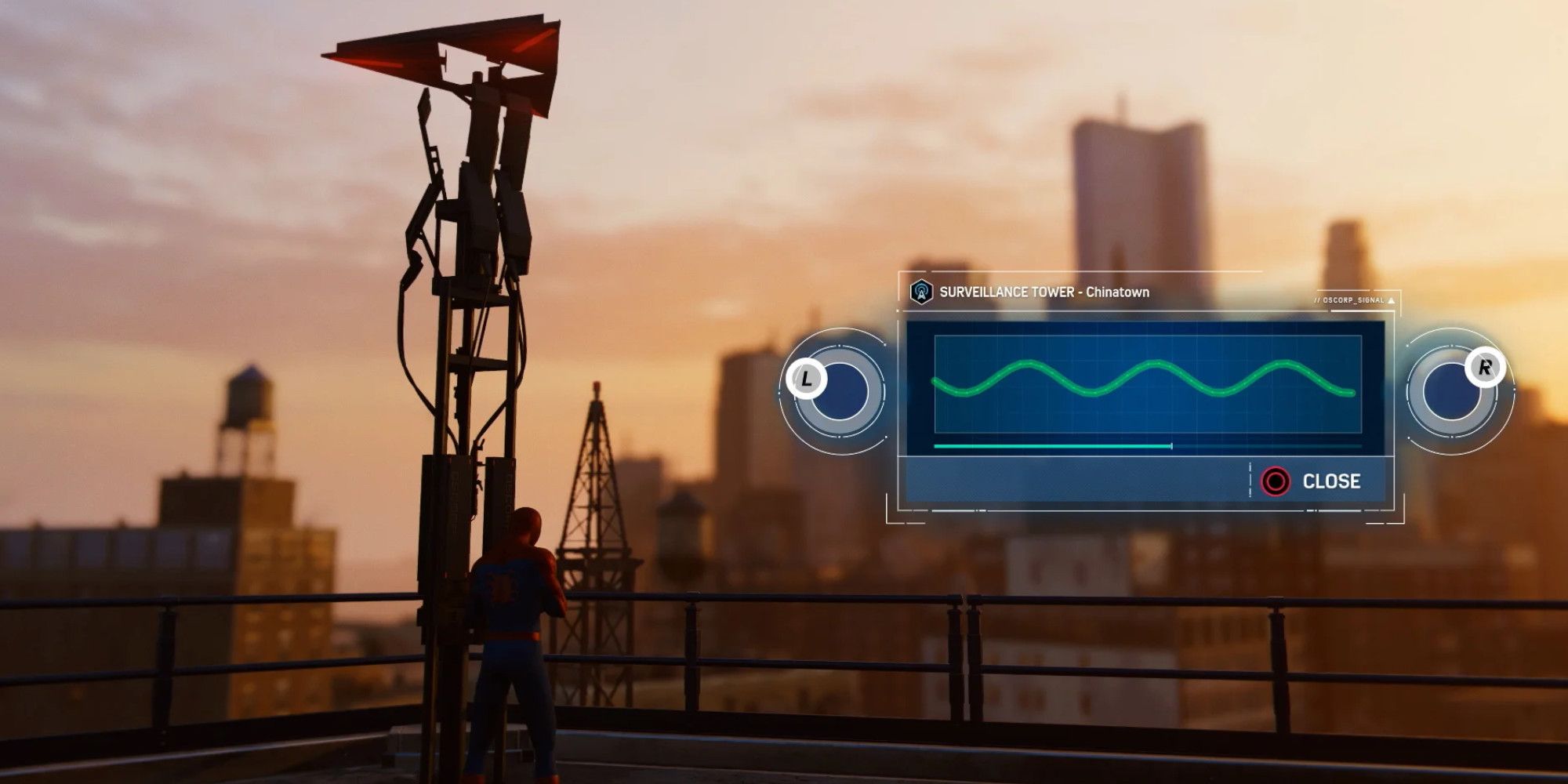 So Spider-Man repairs the police scanners throughout the city. In between fights with supervillains and visits to Aunt May’s homeless shelter, Spidey handles a variety of crimes wherever they might pop up. One of the most common crimes Spider-Man can respond to is drug deals. After beating dealers and buyers to a bloody pulp, Spidey will always make the same remark. “Drugs are probably my most disliked criminal activity. Definitely top five, or bottom five, however that works.” It’s a bizarre thing for him to say, considering the other crimes he can stop are kidnappings, shootouts, truck bombs, armed robberies. There are constant high speed chases that involve people blindly firing bullets out the window, but somehow petty drug deals are Spider-Man’s most disliked criminal activity. You’d think having spent so much of his formative years helping his aunt at her homeless shelter – not to mention becoming homeless himself – that he would have developed a better understanding of systemic problems, but he hasn’t.

This Spider-Man sees crime as nothing more than bad people doing bad things. There’s nothing wrong with the police, there’s just something wrong with bad cops. There’s nothing wrong with the mayor’s office, he just happens to have an evil mayor cooking up secret bioweapons. Martin Li was turned evil by a failed experiment, and his gang of Inner Demons are all corrupted by his negative energy. Doc Ock was turned evil by an unstable technology in his robot arms. These are easy problems to solve. All you have to do is beat up the bad cops, steal the bioweapon, throw Martin Li in jail, and disable the chip on Doc Ock’s neck. For Spider-Man, there is never a bigger picture. None of these problems are rooted in something deeper. When there’s another drug deal five minutes from now, all he has to do is go beat them up too.

No one expects Spider-Man to become a Marxist (it would be nice) but Marvel's Spider-Man casts Peter Parker as nothing more than a super cop. He literally adopts the name Spider-Cop. He shows up at crime scenes, catches the bad guy, and then dumps them into the system, trusting that they’ll be handled and never stopping to consider if anything he does is actually making New York safer. JJJ points this out in another episode of Just The Facts when he explains there were never supervillians before Spider-Man, but of course, JJJ is a kook. There’s an Ubisoft-like quality to the way Marvel’s Spider-Man tiptoes right up the edge of making a point but then drops it, perhaps out of fear of making anyone upset, or perhaps, like Spider-Man, in an effort to maintain the status quo.