We all love the ‘reveal’ trope, right? The detective gathers all the suspects together and recounts what happened before declaring who the murderer is. The suspects sit there stewing in their anxiety, and while some will seem calm and collected, others exude the most hammed-up presentation of fear you’ve ever seen and, at that very moment, you know you’re onto a winner. Films and TV dramas pull these scenes off quite well, but it’s often far less climatic in games. You can’t help but think of L.A. Noire or Ace Attorney, where the suspects usually give themselves away with wide, fearful eyes roving all over the place and other over-the-top guilty tells.

The Centennial Case: A Shijima Story features detective gameplay blended with live-action footage. When it comes to selecting a suspect, you can switch between the characters to view them, and you’ll quickly spot that some look shifty as hell. I thought there was a good chance this would fall into the same pitfall as many other detective games of making it all too obvious who the culprit is, but I was wrong. As it turns out, some innocent people just look guilty sometimes. It’s a good job I’ve never done jury duty.

The plot follows mystery novelist Haruka Kagami as she looks into a 100-year-old murder at the Shijima family estate. In a “shock twist” that murder mystery fans will absolutely see coming a mile away, another murder happens while Kagami is visiting the estate. As it turns out, this family has plenty of skeletons in its closet, especially murders, and it appears as though they’re all connected to the family secret surrounding the Tokijiku, a legendary fruit said to grant eternal youth. As Kagami investigates the Shijima’s past, the player is taken through different time periods to play out various murder mysteries and ultimately solve each one with the aim of slowly piecing together the bigger picture of the Shijima family secret. 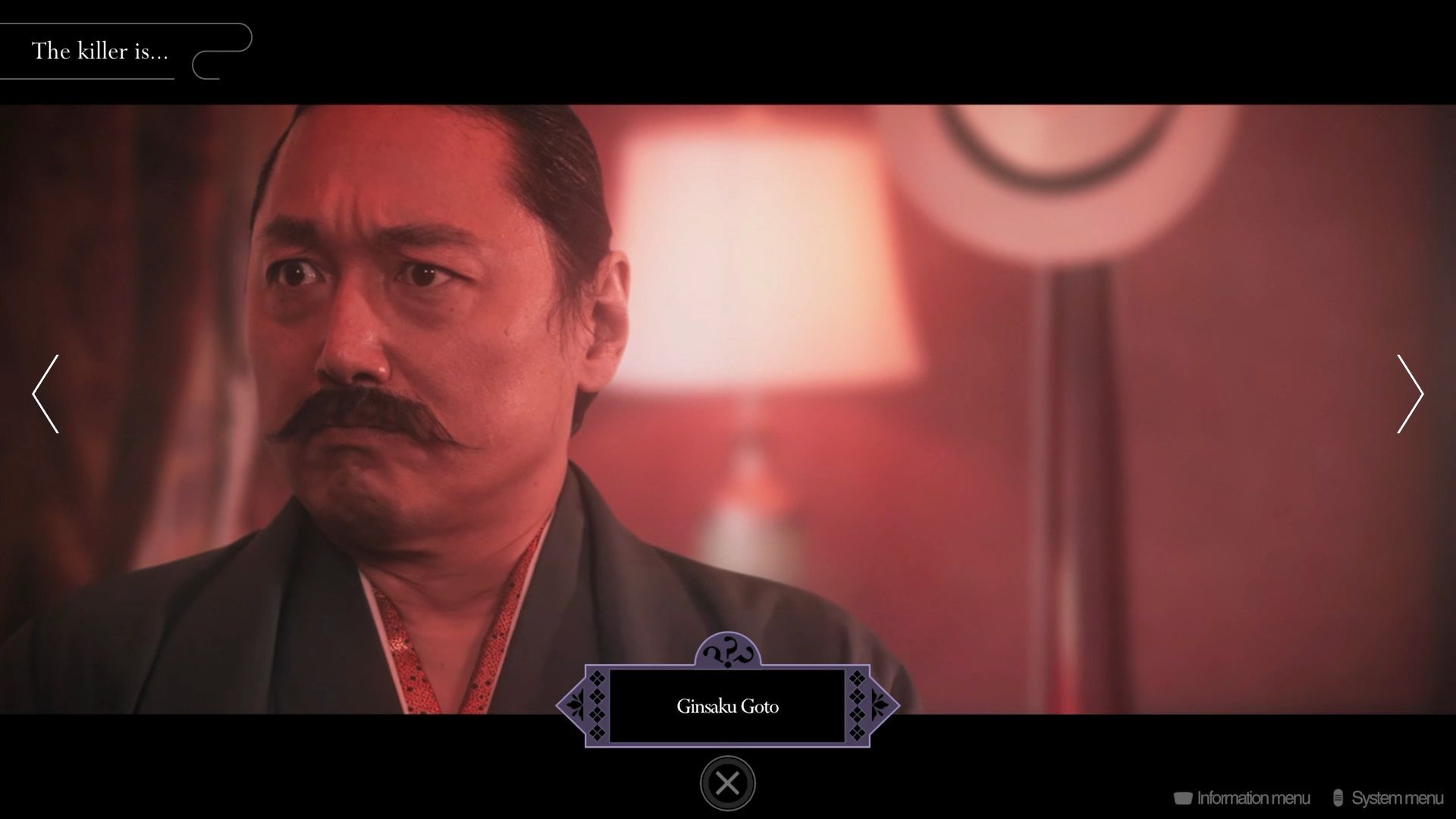 The Centennial Case heavily leans into its two core components — murder mystery and TV drama, and it does them both with a fair helping of cliché and campiness. Almost everything about it is super cheesy, but then all the best murder mystery shows are. It has all the staples of a classic whodunnit, stereotypical characters, misdirection, subtle clues you need to look out for, and the usual conundrums when it comes to alibis, disguises, and of course, grisly and often far-fetched murders. Pair this with the overly dramatic flair common in Japanese dramas — brooding moments, over-acting, and characters swishing their robes around in a theatrical manner — and you’ve got a winning combination.

The cast plays multiple roles across multiple time periods, an interesting choice that I wasn’t completely sold on at first, but it grew on me. I like the concept that Kagami is reading the accounts of past murders and so imagines people she knows in the roles of the characters. Yet at the same time, when you see a young actor with drawn-on forehead wrinkles and a bit of gray dusting on his head, you lose more than a little of your willing suspension of disbelief.

Like most FMV games, you’re going to spend most of your time watching various scenes play out with the odd question thrown in, known as the Incident Phase. As a fan of cheesy dramas, I thoroughly enjoyed this and I think having a supernatural element made it all the more intriguing. The different plot threads and mysteries scattered across the years weave together to create one larger mystery that I failed to fully guess. To give credit where credit is due, you’ve got to appreciate it when a mystery game manages to successfully bamboozle you. 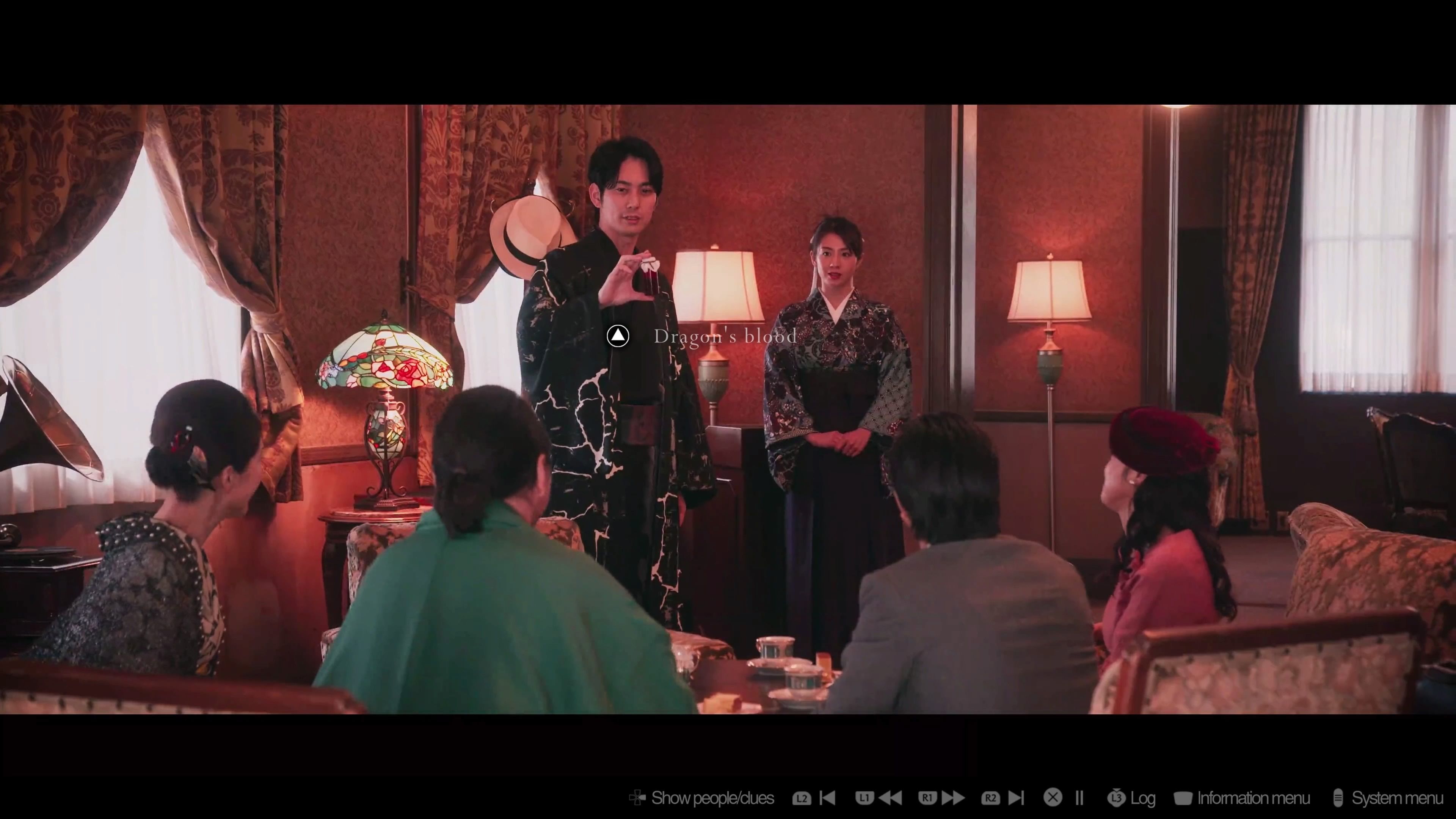 When it came to individual murders, I sometimes struggled to fully piece them together before it came to laying all the clues out. More than once, I correctly guessed the killer but not the exact motive behind it, with more than one having a more unbelievable explanation than what I had initially thought.

The real gameplay comes from the Reasoning Phase, where you pair up clues and mysteries to come up with various hypotheses, before heading into the Solution Phase — that all-important reveal scene where you break it down for the characters and name your killer. But it’s in the actual gameplay where the game shoots itself in the foot as if it’s afraid of being too challenging.

During the Incident Phase, clues appear on-screen as scenes play, and you can react to them to take notes. The thing is, it doesn’t matter if you don’t bother doing this, regardless of whether you hit the prompt or not, because they appear in the Reasoning Phase anyway. So why bother? It seemed rather pointless and I did not waste my time on this.

I loved the Reasoning Phase, which presents a sequence of mysteries — questions that need answering — for you to match various clues to, resulting in multiple hypotheses. Often these included CGI recreations, really basic graphics, yet rather fitting considering they were reminiscent of how evidence is presented in a courtroom. 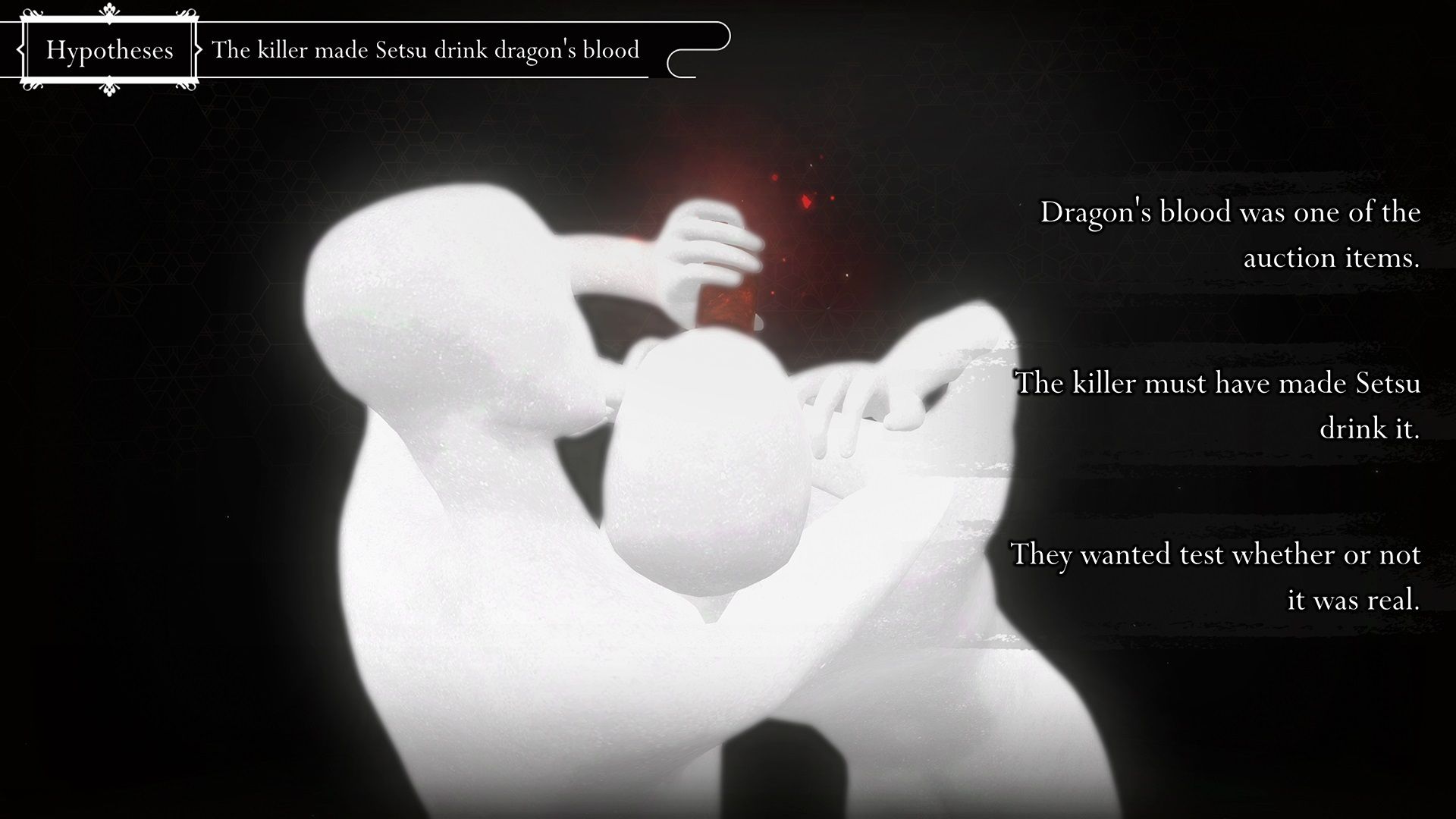 My issue with this phase came when I quickly realised that the clue tiles have patterns that correspond to the edges of each mystery tile, so you don’t even need to bother reading any of them to match them, you can just play pattern snap to solve each one. It’s just too easy. If you want to include that as an optional help setting, great, but at least let the players decide if they want to make an interesting gameplay feature suddenly become redundant.

So far, you could have not bothered to watch any of the scenes or read any of the information and still be well on your way to solving each murder. So what’s next? The Solution Phase. The first part of this has the two protagonists positing hypotheses to try and work out what actually happened. It’s yet another pointless feature: it doesn’t seem to affect anything and you only have to do this for one mystery before you can move on to the best part of the game — the reveal.

This is where it gets good. You have to choose the correct hypotheses in order and sometimes navigate a character’s rebuttal to your version of events. Even if you watched every scene in detail and remembered all the clues, you’ll likely still trip up once or twice as sometimes the characters will shoot down what seems like a perfectly valid explanation, while other times the correct answer presents itself in a deceptive way. It doesn’t matter if you get something wrong, as if you make a mistake, you can just re-try it and just take a penalty on your end score. 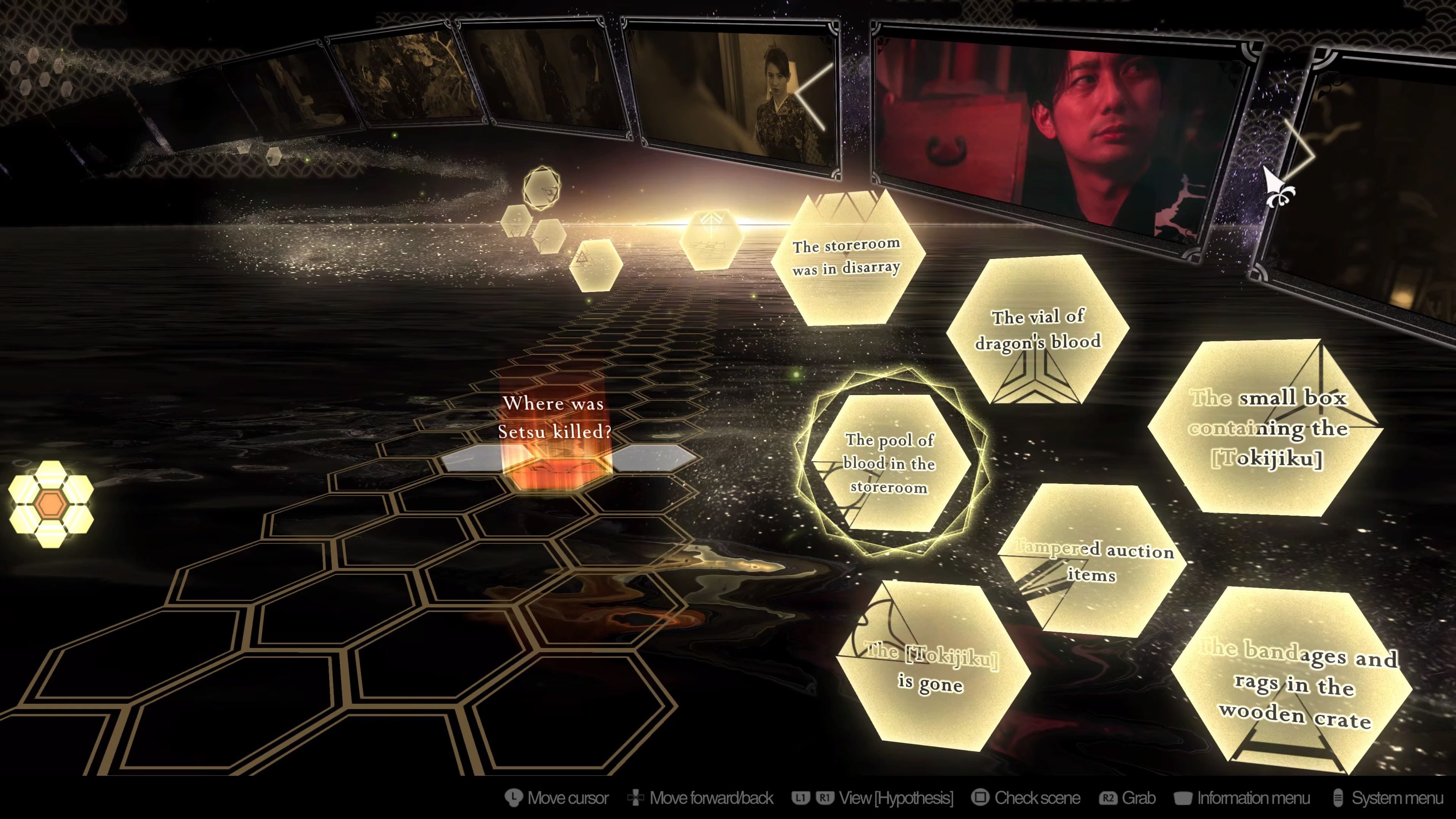 I was pleasantly surprised by just how long the game was and it was all too easy to lose myself as if I were engrossed in a new TV show. Eventually, a prompt would appear to remind me I needed to actually take part in the story, though regrettably, those few throwaway choices you make in most of the game have no impact whatsoever on the story, despite presenting itself as though it might. The dialogue is slightly different, but the scenes play out exactly the same, which feels like a missed opportunity. It would have been better if players could potentially uncover or miss clues based on their choices, making their final case against the killer stronger or weaker as a result.

The Centennial Case: A Shijima Story is a killer combination of murder mystery meets TV drama. While the puzzle-solving aspects tend to come with too much unnecessary guidance to help you along, it’s thoroughly enjoyable to be able to channel your inner Poirot and figure out the events of the crime before dramatically unveiling the murderer to all involved. What the game lacks in a challenge, it makes up for with its exciting plot that ticks all the classic whodunnit tropes that mystery drama fans love to see.

Score: 3.5/5. A review code for PlayStation was provided by Square Enix.