Opera House will mark Peregrine’s (Corone Design) second Kickstarter project, the first being Cabal, launched and successfully funded a decade ago back in 2016. Peregrine is also no stranger to the world of tabletop roleplaying game design, with a long list of premier games on his resume, including the Buffy and Angel RPGs, Serenity, Warhammer, Doctor Who, Leverage, Firefly, Blue Rose, Star Trek, and Vampire the Masquerade, just to name a few.

With multiple new tabletop roleplaying game Kickstarters seemingly being launched daily, seeing one that is truly both unique and interesting is a surprise. Peregrine’s first TTRPG, Cabal, was one of those, wherein its players didn’t roll themselves individual characters, but rather each rolled to help create a “single character,” this character being “an organization with its own secret plan and goals,” which could include “a conspiracy, a corporation, an activist group, an occult society of magicians or even a collection of hidden alien refugees.”

Opera House also distinguishes itself by being highly elegant, in that you roleplay as honored members of the “Royal Grand Opera House, the largest and most prestigious theatre in the city of Pavilion.” You take on roles of people on both sides of the red curtain, from actors, dancers, and musicians, to members of the backstage lighting, sound, and wardrobe crews, and even as the executive Stage Manager.

Gameplay can center on the production and performance of a full-length theatrical event, to numerous behind-the-scenes mystery and drama, such as dealing with spies and saboteurs from rival opera houses, to busting ghosts and other various horrors, to Warehouse 13-ing a variety of on and off-stage cursed props. But that’s just one of the three primary aspects of gameplay in Opera House.

The second Opera House gameplay feature entails playing “a single session, ‘one night only’ mode where events occur in real time during the performance of a show.” That show performance doesn’t have to be an opera, so it could be most any live theater performance. Rocky Horror Picture Show, anyone? 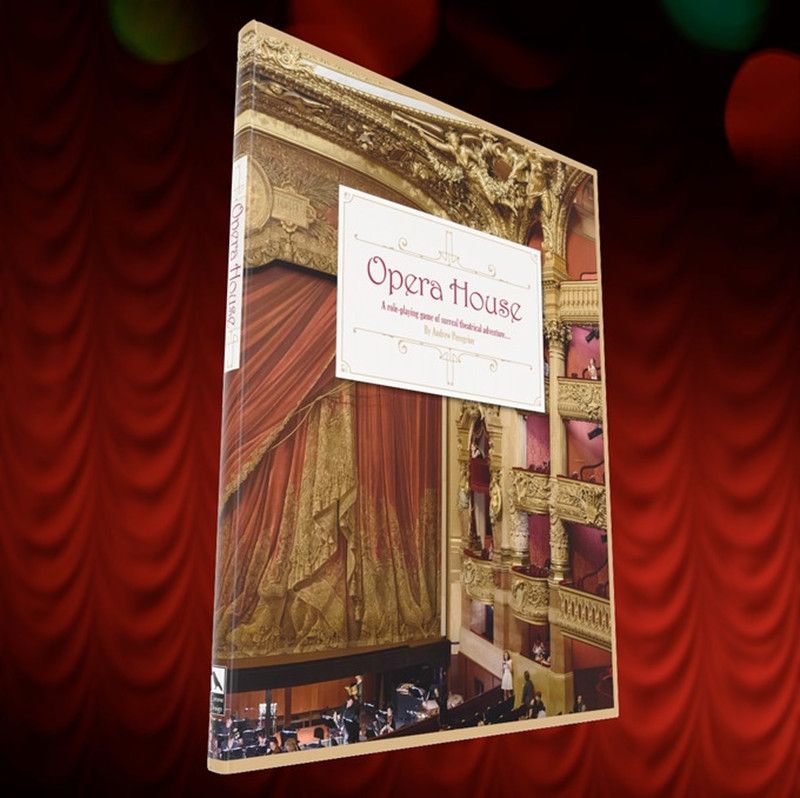 Thirdly, Opera House is a complete theater sourcebook, thoroughly detailing “what each department does in a theatre, and how a show is put together from auditions to the final night.” This info is solidly based on actual real-world facts taken from Peregrine’s real-life day job as a Lighting Technician at the Theatre Royal Haymarket in London.

Opera House has just four reward tiers that range from £1 (about $2) to £40 (about $54). Click over to the Kickstarter page for all the other details.