There have been many music simulation games over the years. Guitar Hero, Rock Band, SingStar. All of them pale in comparison to the marvel that is Trombone Champ. You don’t need any silly plastic peripherals for this one, or even any real musical ability,you just need the will to strive for greatness.

Okay, hyperbole aside, Trombone Champ is ridiculously fun. Shout out to PC Gamer for bringing this game to my attention. It starts with an absurdly over-the-top intro that gives you your goal: become the Trombone Champ.

The videos posted by people online look silly, but nothing prepared me for actually controlling the trombone myself. Watching the avatar – which looks like a tortured Mii, trapped in trombone purgatory – writhe as I shot my mouse up and down trying desperately to hit the notes had me in stitches, even as I was missing all my cues. 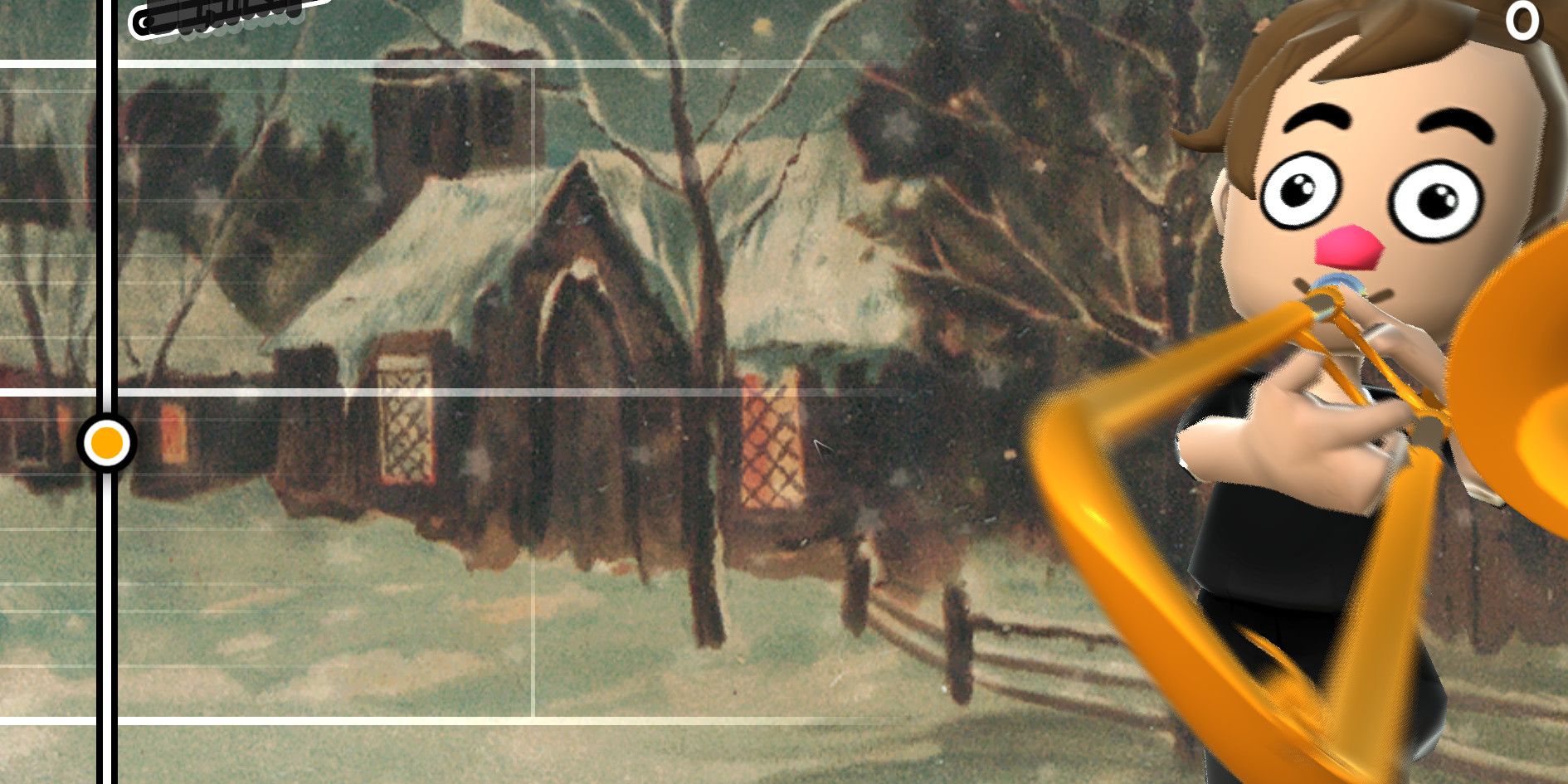 The game starts with a warm-up, but I only managed a B on my first try – a rating I actually think was very generous. The first song has one difficulty star out of ten, but the next immediately jumps to three. They also have stats such as Tears, Spunk (tee hee), Doots, Slides, and, hilariously, Fury.

As I prepared my lips for a rendition of Take Me Out To The Ball Game that would go down in history as one of the greatest, the loading screen told me the uncomfortable fact that two to four spiders – on average – live inside a trombone. Great, now I’m, worried about inhaling one. I’m sure this won’t affect my performance. 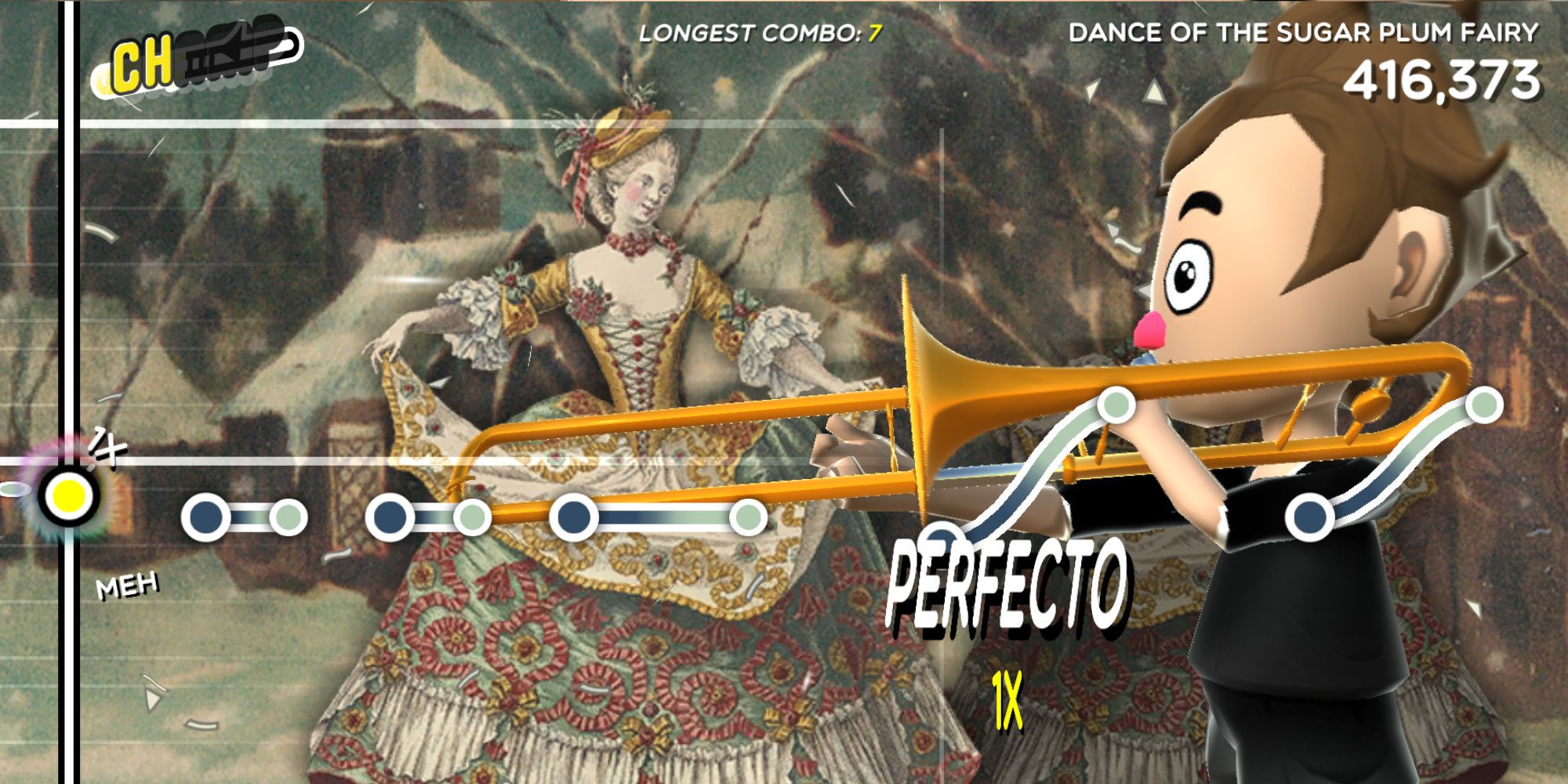 During this song, I managed to hit a couple of perfect notes – I must be a virtuoso – and the screen shook as a baseball smashed into it. It was jarring, but a nice touch that added some atmosphere to the track. The PowerPoint style images in the background – PNGs of horses popping up, ballerina cut-outs bumbling along to songs – also add to the visual texture of the game, and make it feel even more like a bizarre fever dream. It looks weird and cheap but in a self-aware way. It just works.

As I loaded into the next song and was told the first trombone was invented in 20,000,000 BC, I began to suspect the game wasn’t taking me very seriously. At least that should mean there are no spiders in them right? Right? That’s the perfect anecdote for Trombone Champ, though. It doesn’t take you or itself seriously at all. It’s just silly fun. 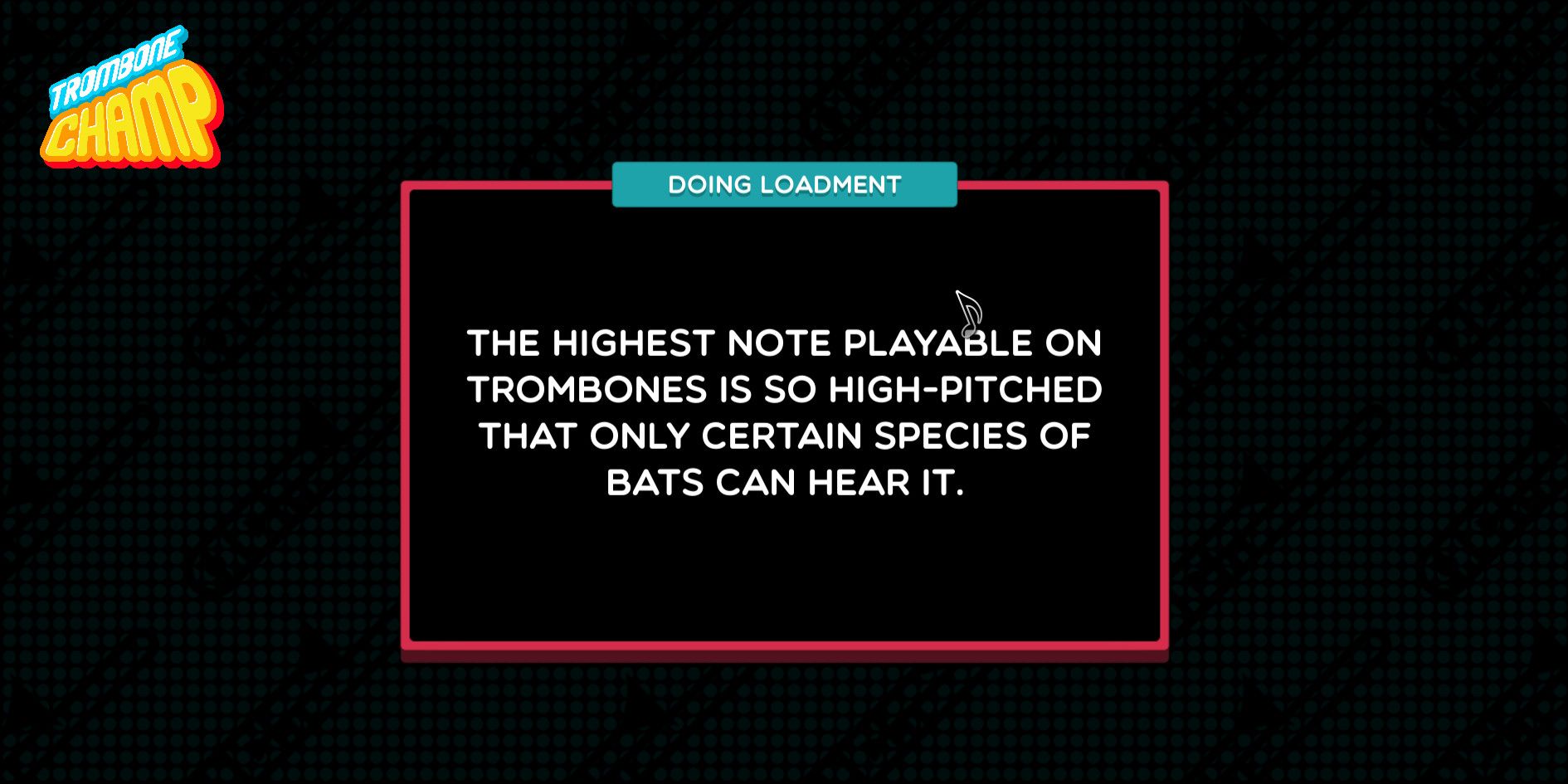 The next song, Mozart’s Eine Kleine, was intended for string instruments, but the developers over at Holy Wow decided to throw in the Trombone and trap drums because why not. It was wild, absolutely wild. All I want to do is play the game, but I have to write this and work for a living.

I decided to drop the tempo to see if I could score higher than a B. I also read the advanced info tab which told me how the game calculates scores and gave me some interesting baboon facts. I still don’t get the game’s obsession with them, but time will tell I suppose. Trombone Champhas a built-in speed meter which you can adjust between songs if you’re not comfortable with the pace. I personally favour the chaos of 100 percent scroll speed, but I did indeed get an A and enter the colourful champ mode when I knocked it down to 60 percent. I managed to do the famous Nutcracker song on full speed and get an A as well though, so I think all the practice is paying off. 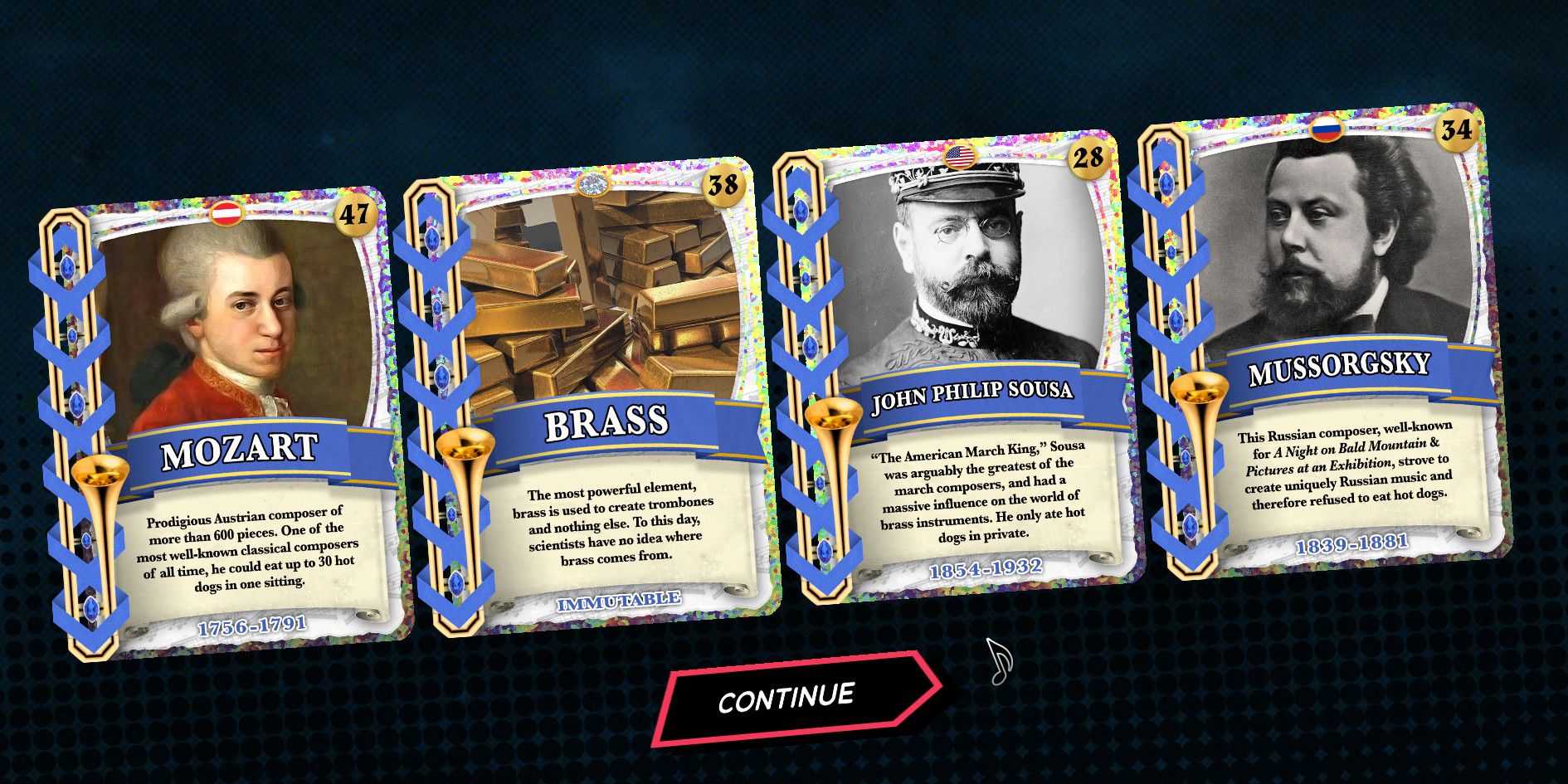 For some reason known only to the developers and God, Trombone Champ also features card collecting. These cards have what I assume to be made-up hot dog-related facts about a bunch of famous composers and trombone players from throughout history. One even states scientists have no idea where brass comes from. You buy cards with toots you get for playing songs, and you scrap them to make turds, which you use to build other cards. Like I said, I don’t get it, but I do feel happy chemicals in my brain when the hip-hop horns blare as I open another pack.

Trombone Champ isn’t just good, it's great. It’s a showstopper, literally. My housemate passed by as I was playing and stared, mouth agape before asking, “what the fuck are you doing to that poor Mii?” He then nudged me off my seat to have a go himself. That’s the kind of game this is, one you’ve got to play for yourself. It’s out now on Steam for just £11.99. Give it a go, I promise you won’t be disappointed.