Steelrising: How To Beat The Treasurer Of Les Invalides

And so we are onto the next Titan Steelrising has to throw at us. This time out, we are dealing with The Treasurer Of Les Invalides. Naturally, this hulking behemoth hits hard, but what really separates him from his peers is how he takes hits. Which is to say that he is able to barrel right through them. That's right, this is one Titan you aren't going to be able to stagger.

But though you may not be able to sit this Titan down, that doesn't mean you won't have opportunities to dish out some big damage. We'll show you what to look for with his attacks, and when to strike. As they say, the bigger they are, the harder they fall.

The Treasurer Of Les Invalides' Attacks 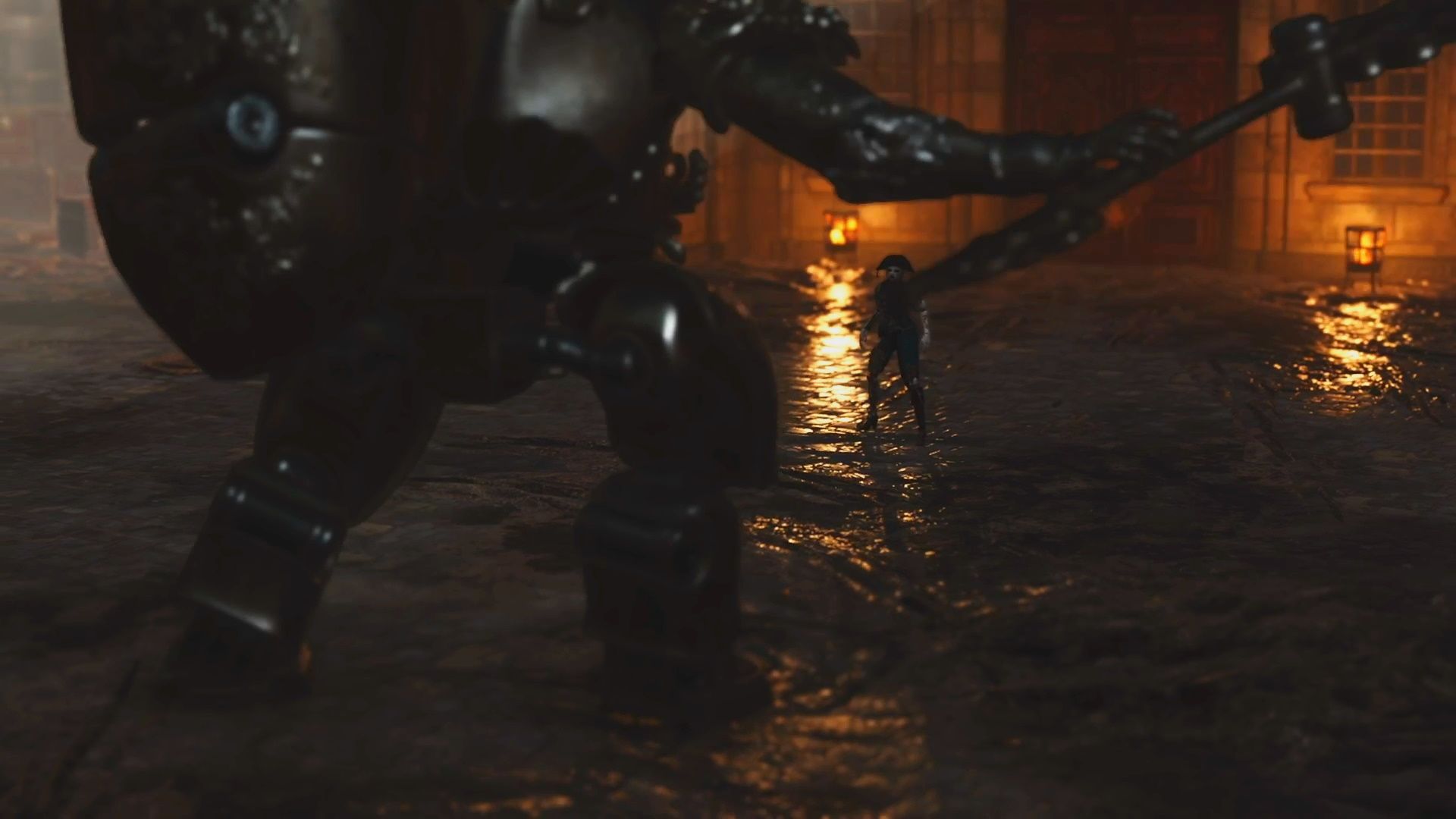 The Treasurer Of Les Invalides stands out in a few key ways. Firstly, they are enormous, and their attacks have a large range. They also have a whole range of moves that are imbued with electricity. However, the most notable element of the Treasurer is that they do not stagger when hit by heavy attacks. So, while you have been able to interrupt most bosses with a fully charged attack, you will have to respect the Treasurer's attacks. Thankfully, there are still plenty of opportunities to deal damage to this Titan, and we'll identify them all—move by move—down below. 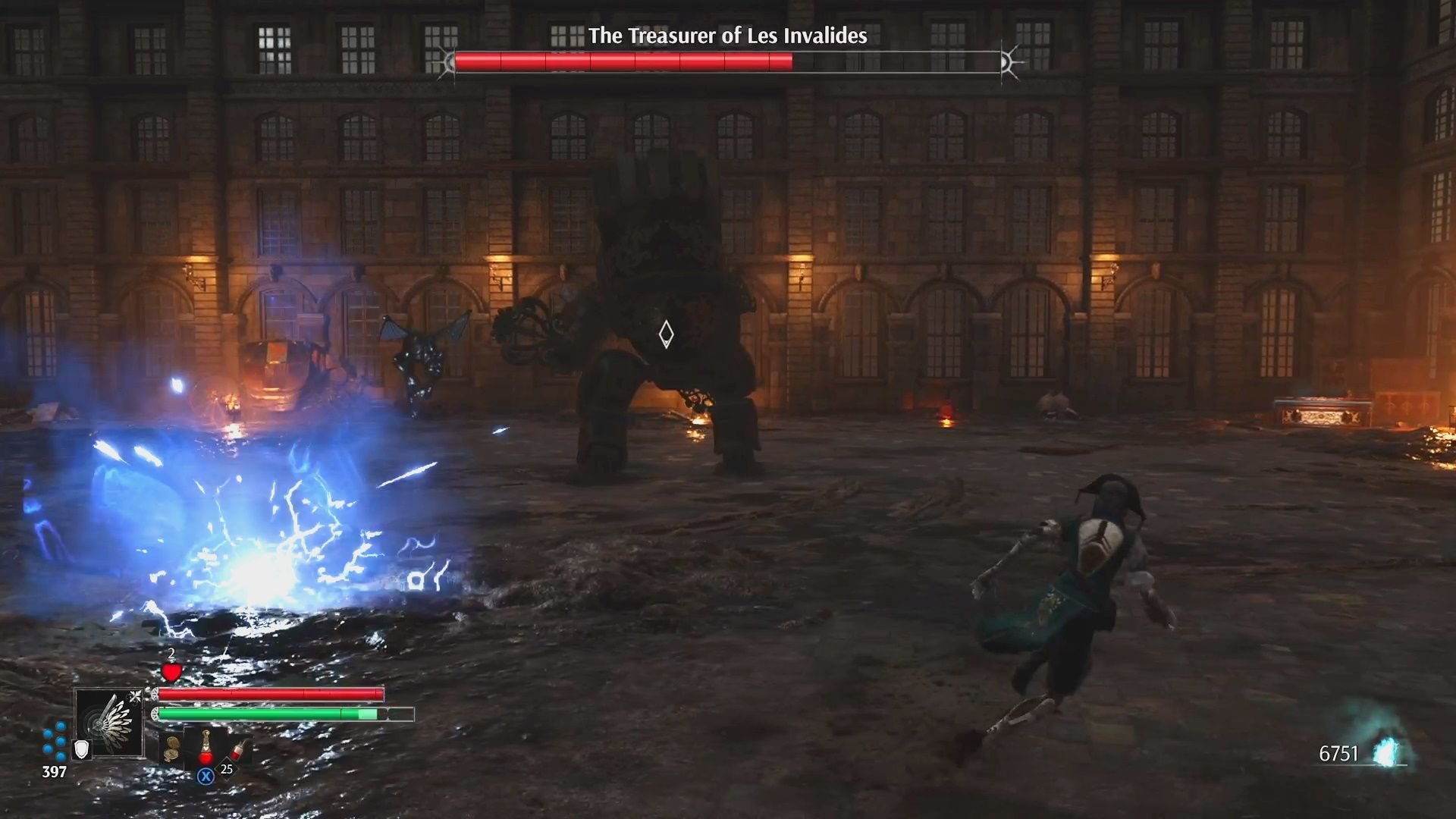 This move sees the Treasurer put their key into their chest and then summon three gargoyles. For all intents and purposes, the gargoyles are projectiles, not enemies. So, avoid them and they will explode. During the part where the Treasurer is turning the key, get a few hits in, but make sure that you are ready to dash away the second those gargoyles pop out.

If a gargoyle does hit you, they will do a relatively small amount of damage, but they apply a huge amount of the electricity effect. 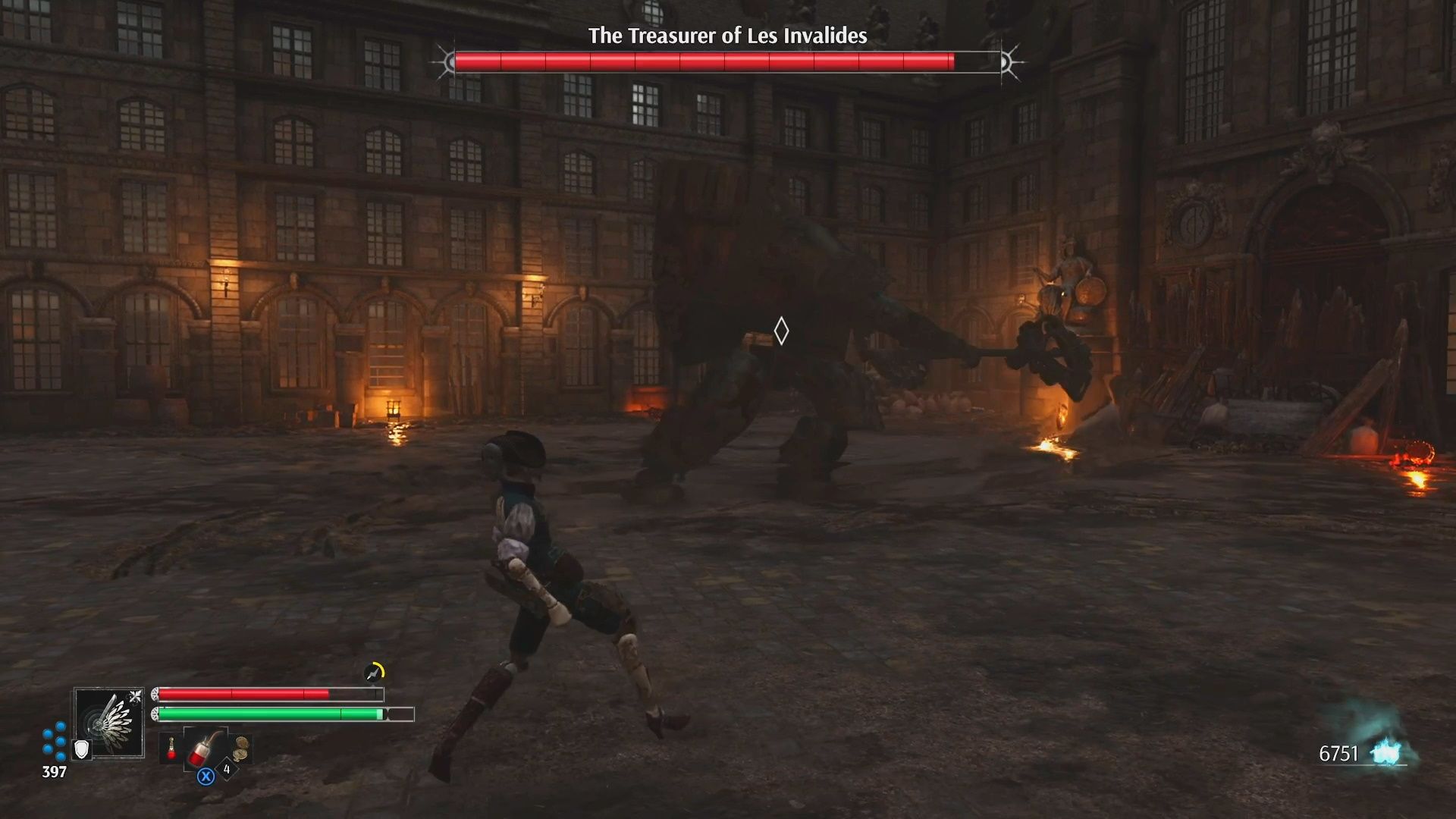 This is a relatively slow horizontal swipe. The Treasurer will extend their key out to the side before they swipe at you with this one, so when you see them do that you are going to want to dash past him and get a back attack in. 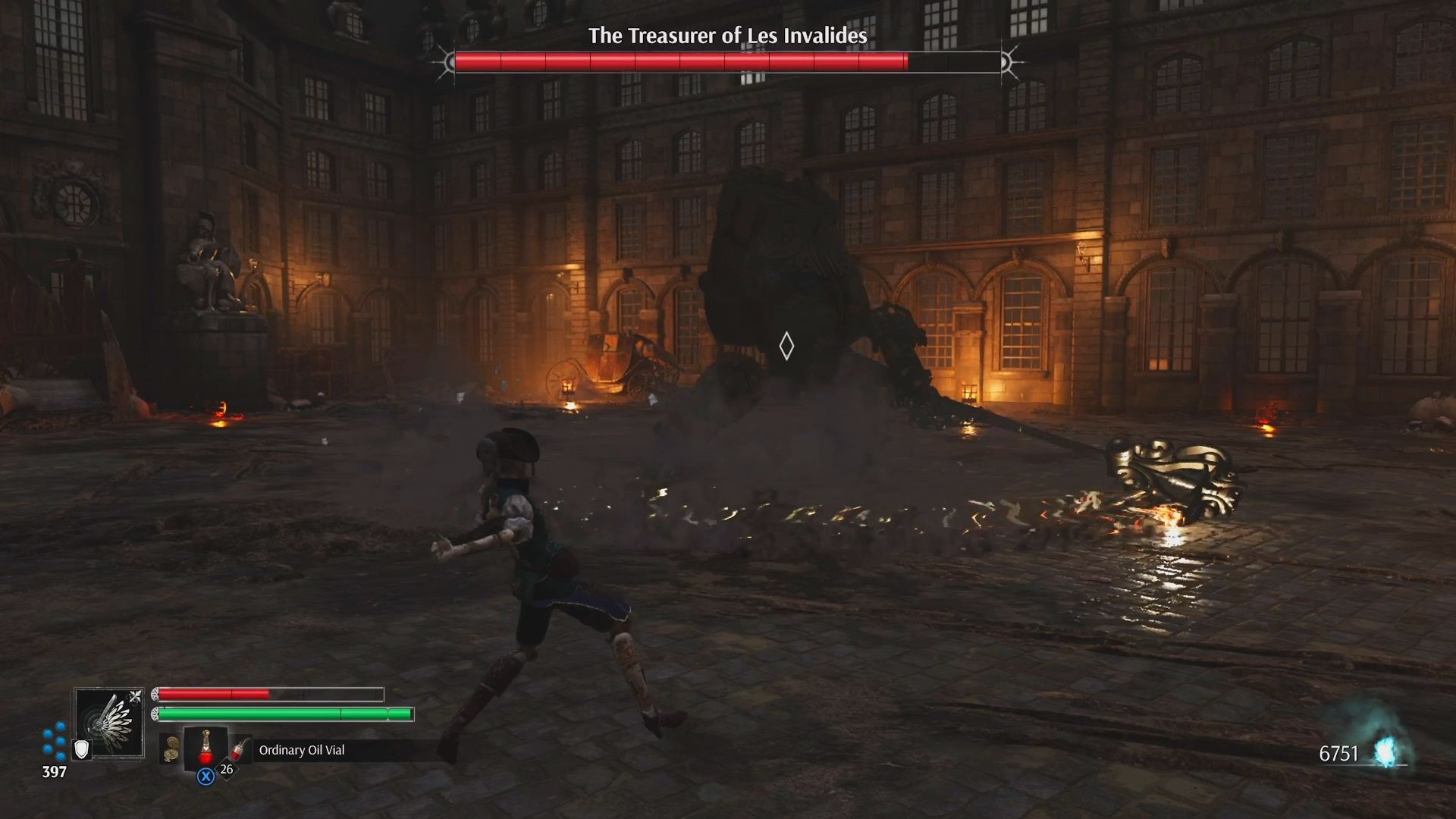 That's right, the Treasurer has a second-swiping horizontal attack. This one is also pretty slow, but it has a much larger range and even reaches decently far behind him. You know this attack is about to happen when you see him wind up with a giant two-handed swing. You can dash past him for the back attack, but be cautious, if you are a touch too far to the left you will get clipped by the end of his swing. 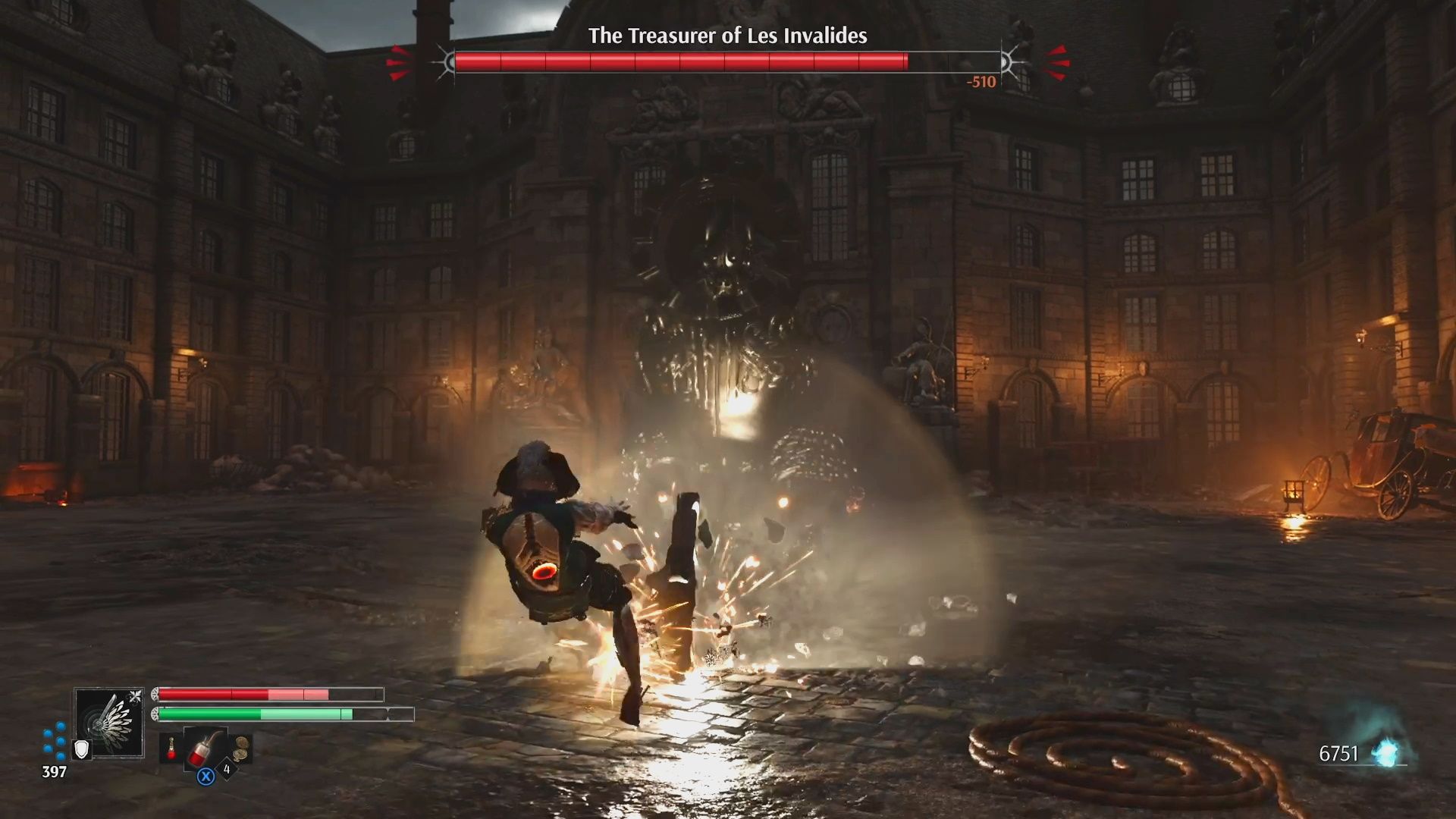 For this attack, the Treasurer will raise their key above their head and then slam it down. While this move does have a pretty notable tell, as the Treasurer takes a solid second to get that key above his head before he brings it down, it can absolutely catch you off guard. Especially since the move does track to some degree. That being said, you can dash to the side, and his recovery is long enough that you can tag him with a charged attack. 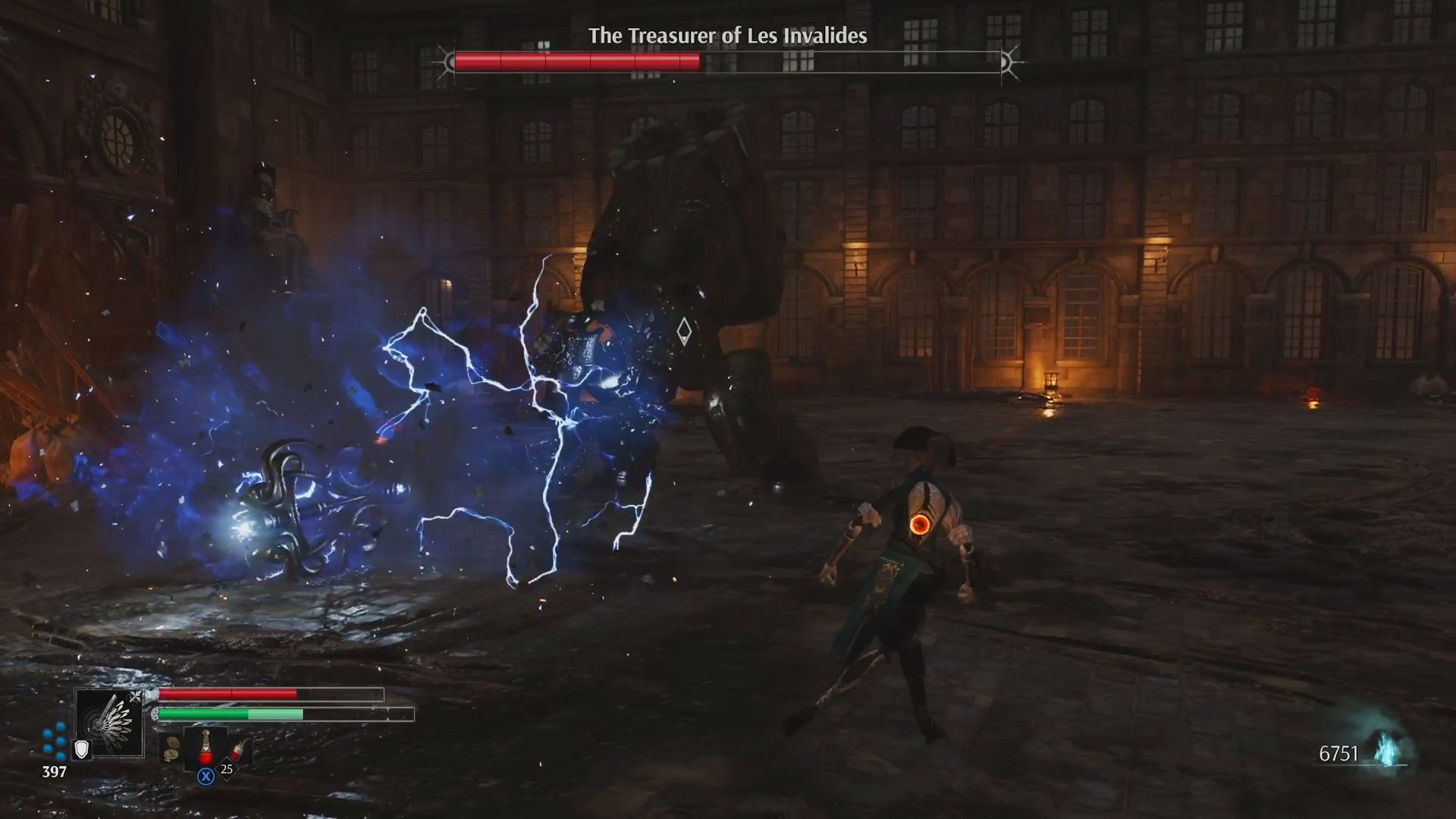 Once the Treasurer imbues himself with lightning, this attack will also send a blast of lightning forward. So, make sure you are dodging behind him or strafing to the side. 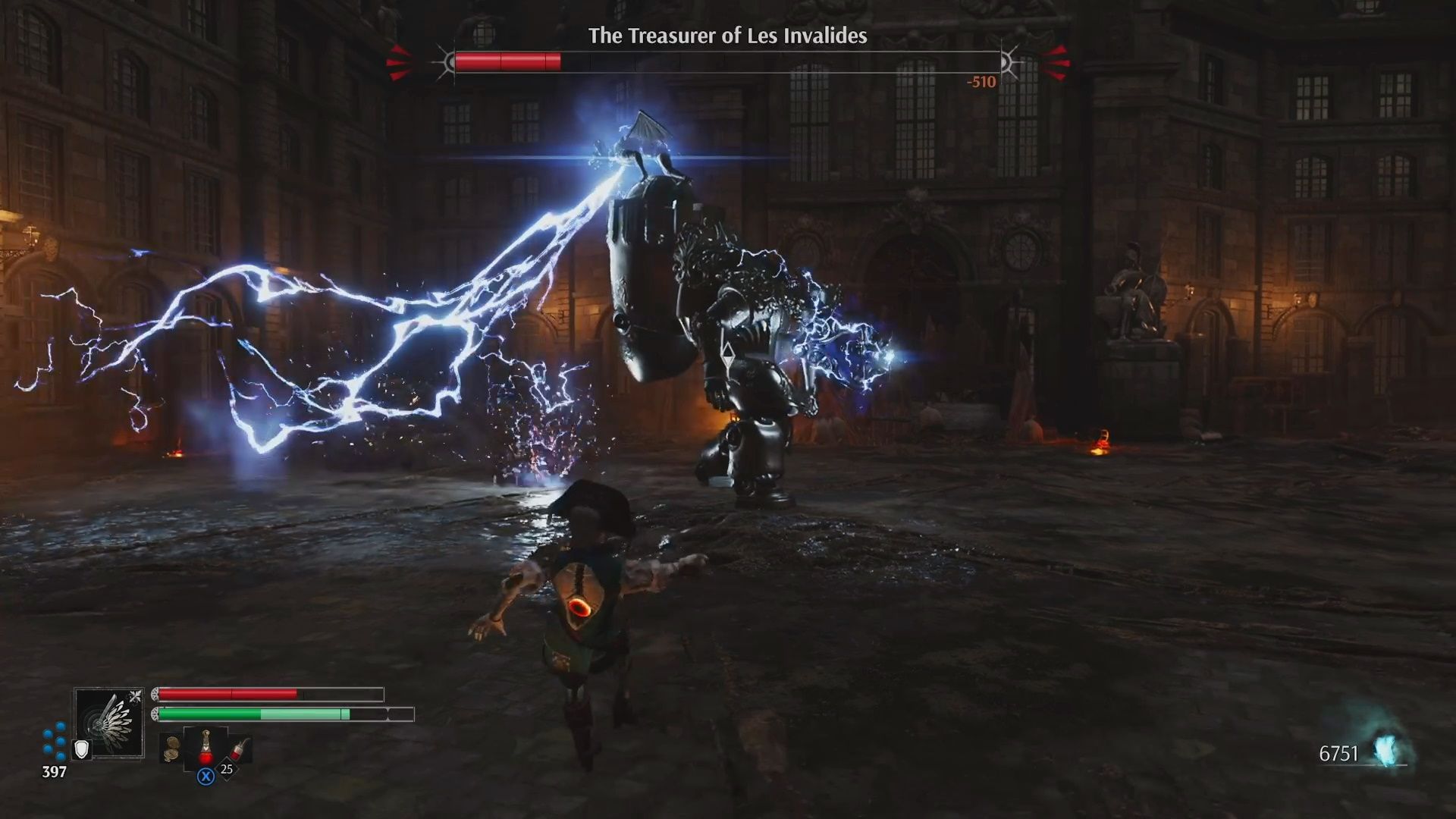 Once the Treasurer gets to his final form, he will summon a gargoyle who will fire a bolt of lightning and rotate while on the back of the treasurer. This move is actually pretty slow. So, just dash in the opposite direction, and you will be able to get away from it pretty easily. 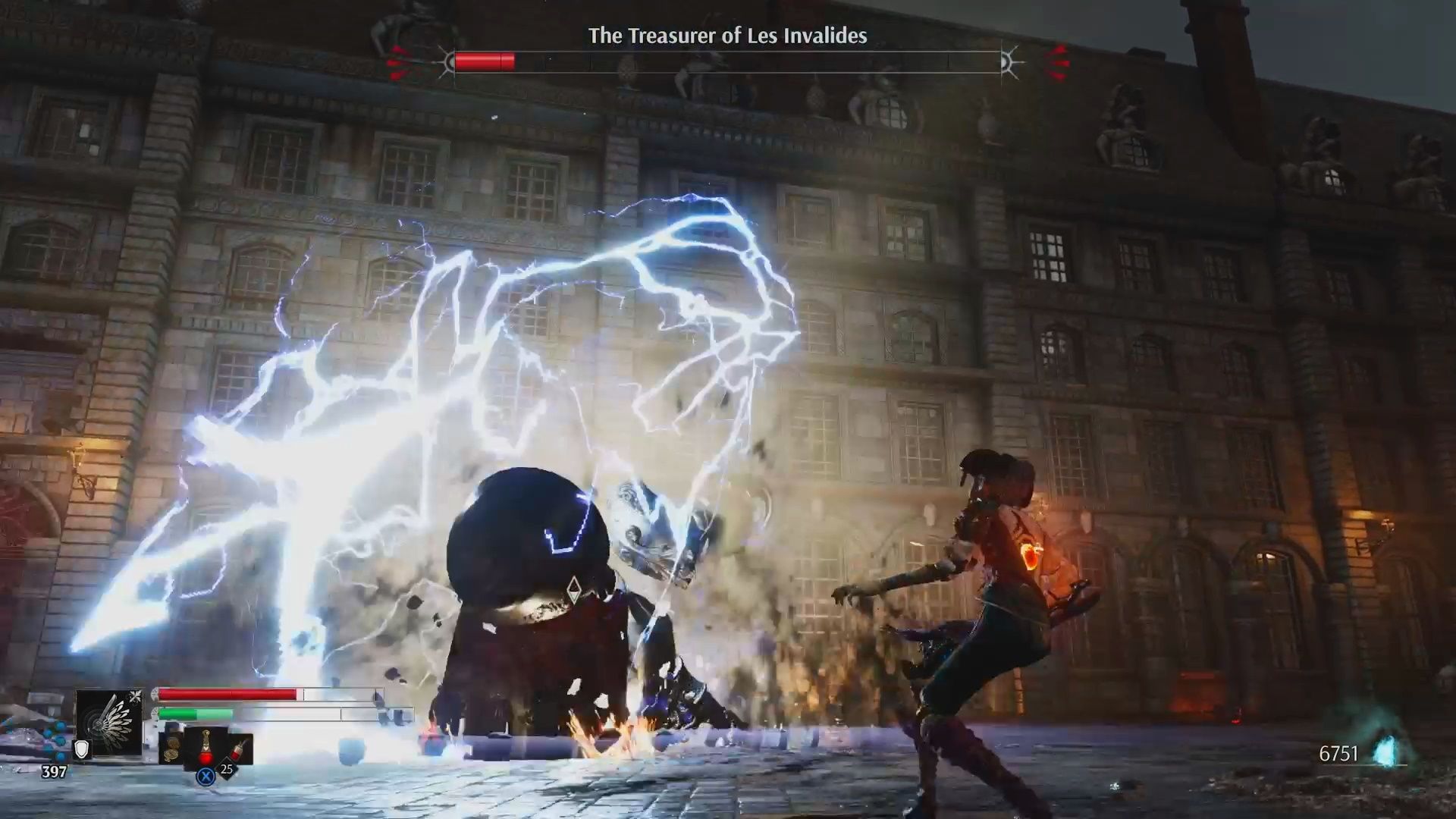 This is another final phase attack. Once you see fire coming out of the back of the Treasurer, they are about to take off. And what comes up, must come down. You are given a pretty decent amount of time to get away. He is also left completely vulnerable after he lands. Which, of course, is the perfect opportunity to finish him off. 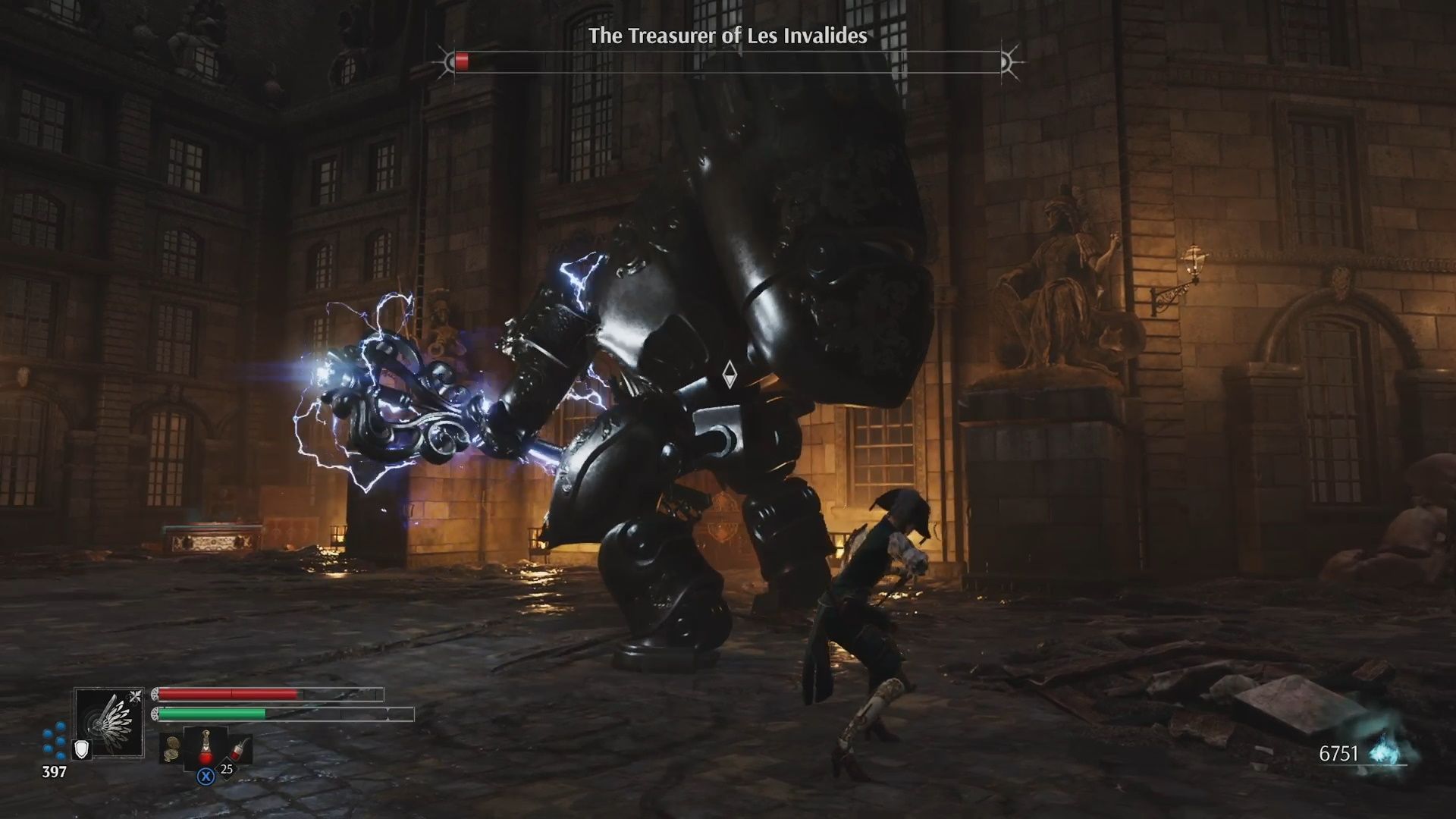 When it comes to equipment, the heavy-hitting weapons lose their biggest advantage, as the Treasurer can't be staggered with charged attacks. So, the lighter weapons are better suited to taking this big boy down. Though, if we are being honest here, the fact that the Treasurer is so slow, and all his moves are so heavily telegraphed, means that you will be fine using nearly any weapon against him.

As a side note, if you are looking to enter this battle in the best shape possible, it isn't a terrible idea to bring some resistance vials for lighting. The Treasurer has a bunch of lightning-based attacks, so that will help you effectively eliminate that aspect of this battle. 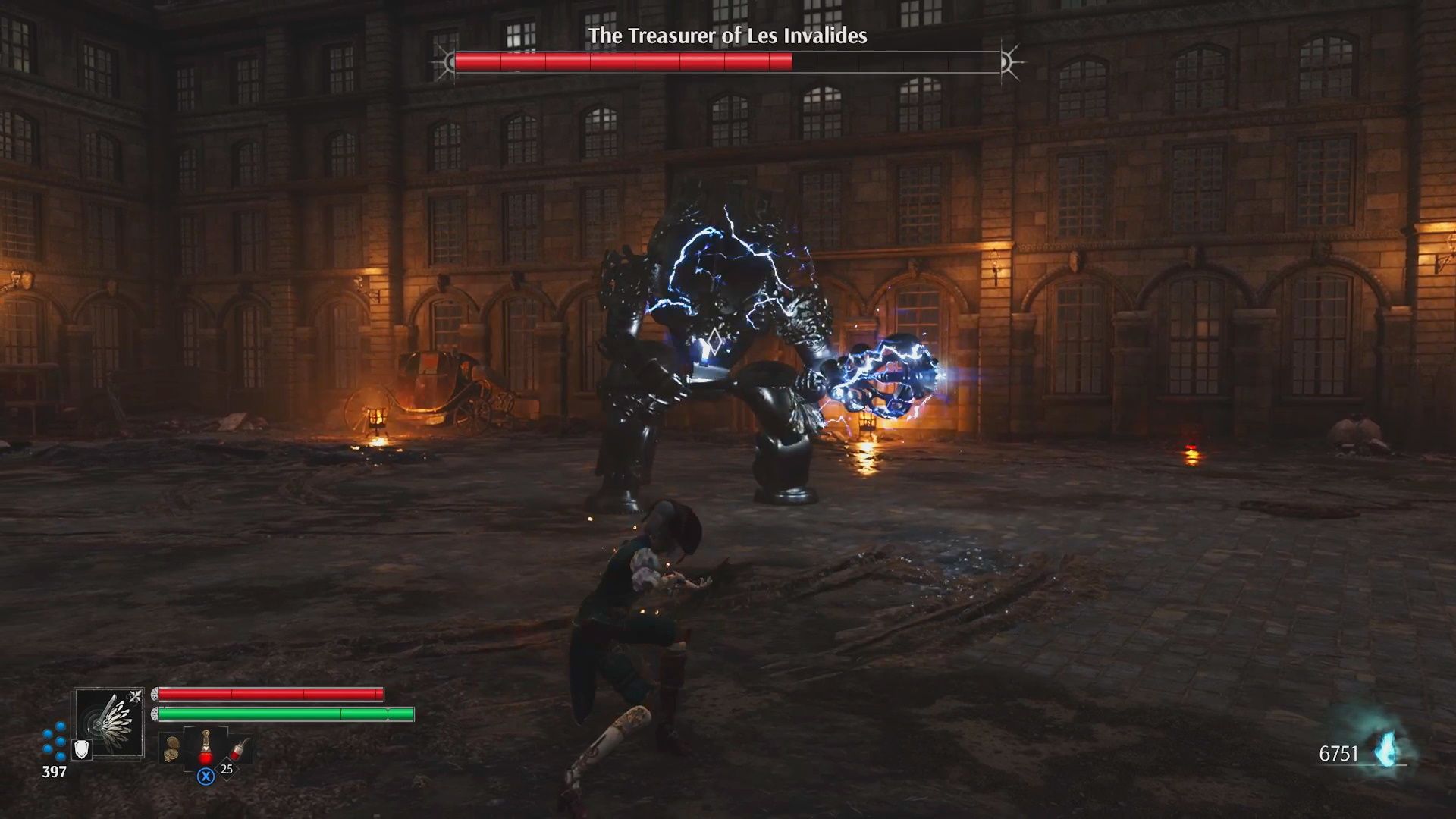 Before we even get started, the first thing you need to know about The Treasurer Of Les Invalides is that he does not stagger. The only time we have seen a boss like this before was with the Unstable Statuary Ram. So, as we alluded to in the equipment section, you aren't going to be able to string charged attacks together by putting the Treasurer on their butt multiple times.

While the Treasurer may be able to move right through your attack with barely a wince, their attacks are so clearly telegraphed that this shouldn't be too much of an issue. If he raises his key above his head, he is going to perform a vertical attack, if he brings the key to his side, the attack is going to be a swiping horizontal attack. If you can, get behind him and attack his back. Otherwise, back dash for swiping attacks, and side dash for vertical attacks. 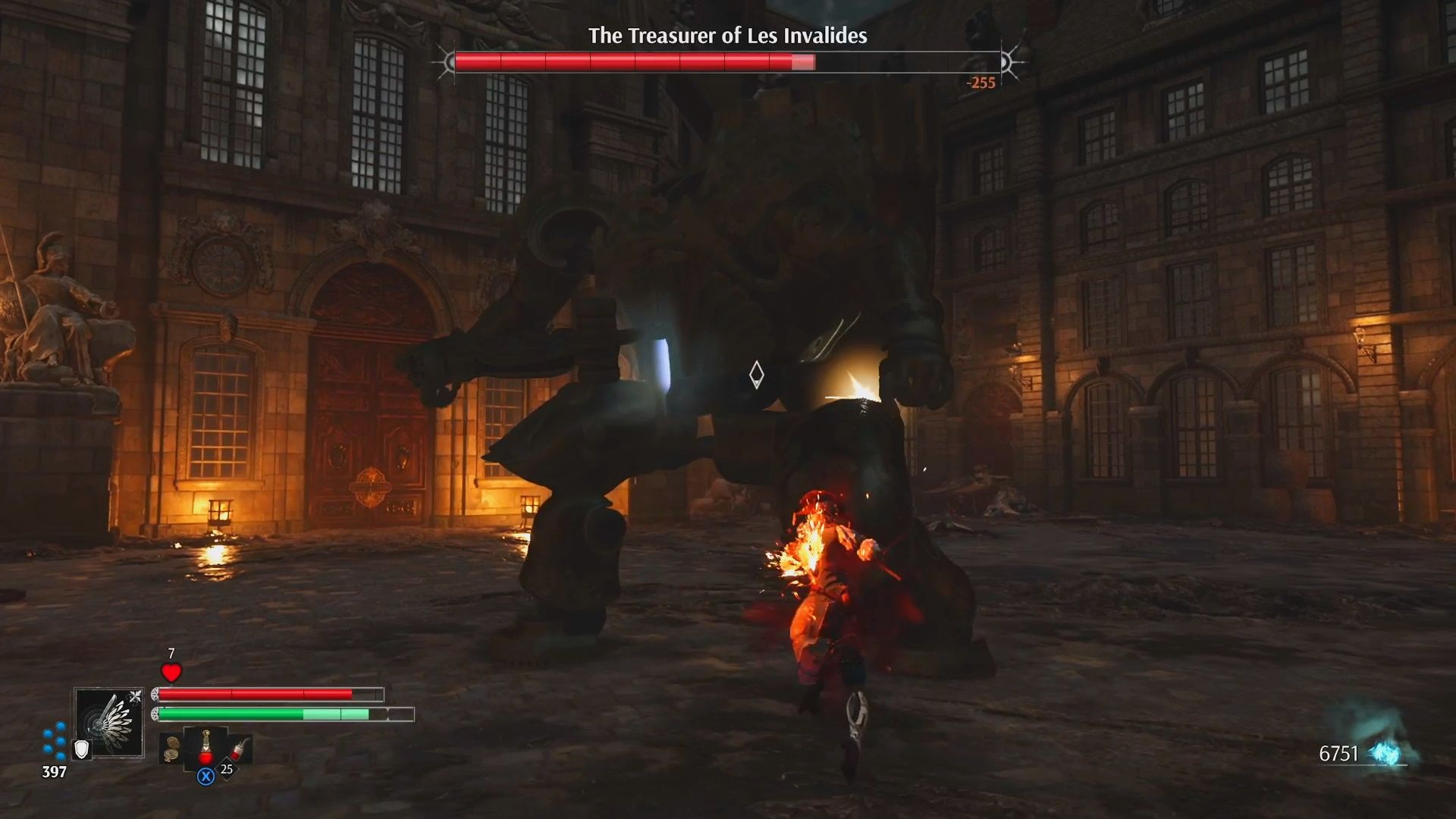 Another key moment to attack is when the Treasurer is turning the key in their chest. You can do a lot of damage here. The amount of time he is locked into this animation seems to be pretty universal across all his moves. Once he has turned the key, it is time to dash away. 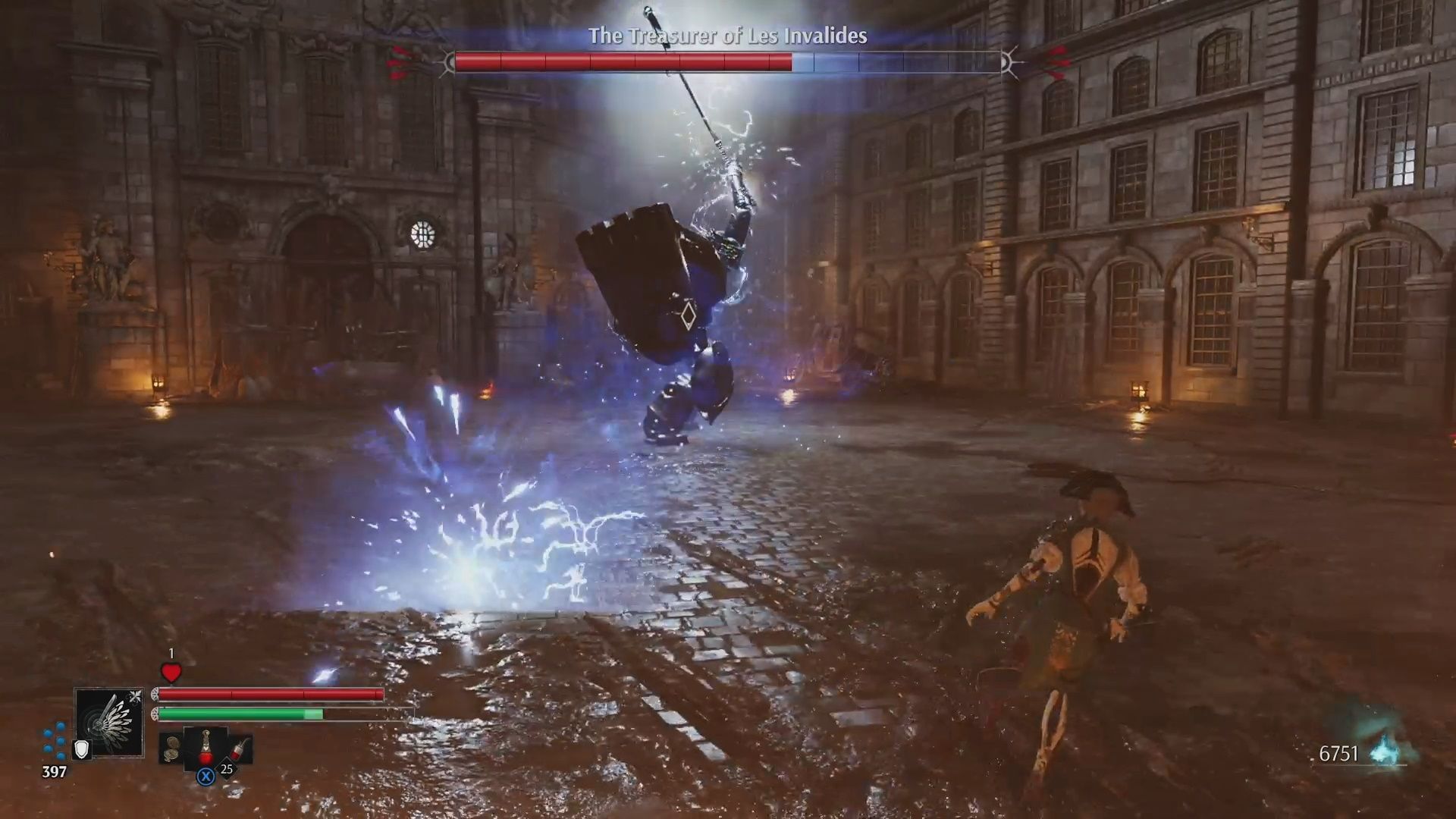 Once you have taken the Treasurer down to half of their health, they will call down a bolt of lightning, which will imbue their giant, vertical key swing with electricity. Now the move isn't just a powerful attack, but essentially a projectile. He likes to use it a lot in his second phase as well. So, just dash to the side, and then let a charged attack rip while he recovers. He will also use his rotating lightning attack. This is a prime opportunity to do some damage. Just stay close to him, land big attacks, and dash away from the lightning as need be. 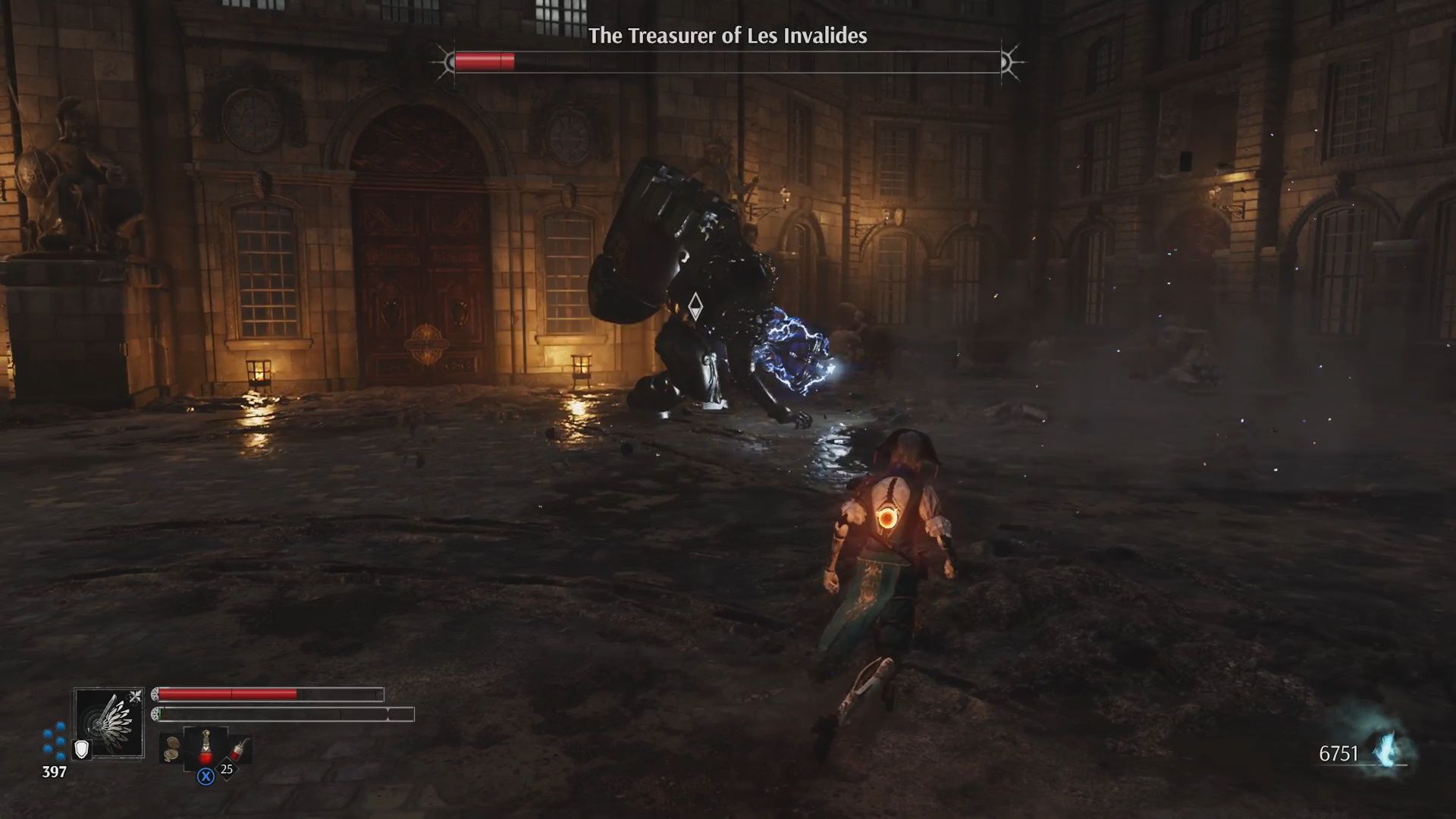 Once you have the Treasurer down to about a quarter of their health, he will start to rocket up into the sky, and come crashing down. The startup for this attack includes a key turn, and once he lands he will be left vulnerable. So, just make sure to dash away when the rockets come out, then dash back in once he is slouched over on the ground. It won't take long to finish him off from here.