Ares Island, the second world of Sonic Frontiers, introduces new Challenges scattered throughout its deserts, canyons, and plateaus. Combined with familiar puzzles you'll recognize from Kronos Island, these Challenges will keep you guessing as you explore the new environment.

We tracked down and solved all twenty-eight of the Challenges on Ares Island. This guide contains all their locations, rewards, and tips for completing them. Once you've solved all of them, you'll be able to fast-travel to all the island's Portals – from there, finishing Ares Island and defeating Wyvern should be a snap! 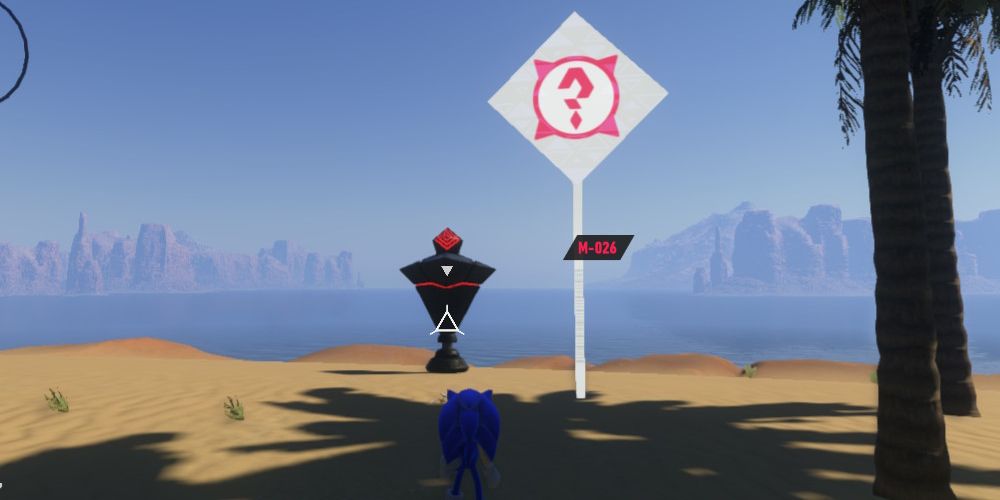 Attack the red punching bag to begin the challenge. You need to deal fifty damage within ten seconds, which you can easily do by simply hammering the attack button. 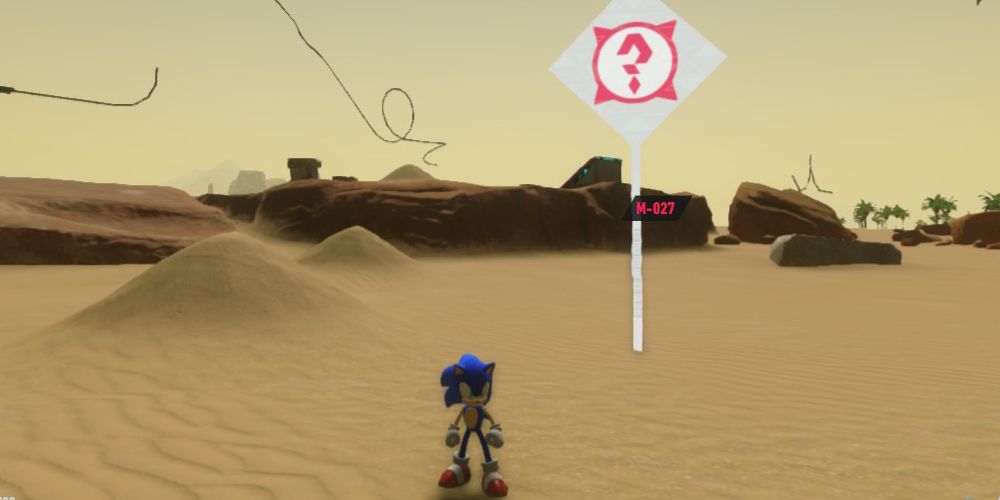 Clear away the small piles of sand nearby using Cyloop, then press the buttons underneath. The third one is on a rocky outcropping next to the Challenge Marker, so don’t forget to check up there! 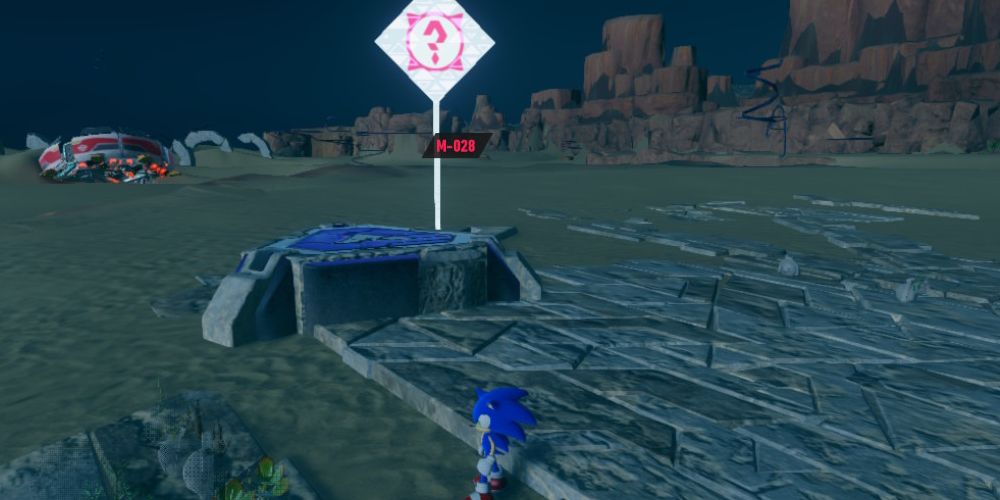 Stand on the triangular pedestal to start the Challenge. Once the timer starts, hold both Dodge buttons to prepare a parry and wait for a yellow projectile to hit you. Sonic will parry the shot and complete the challenge. 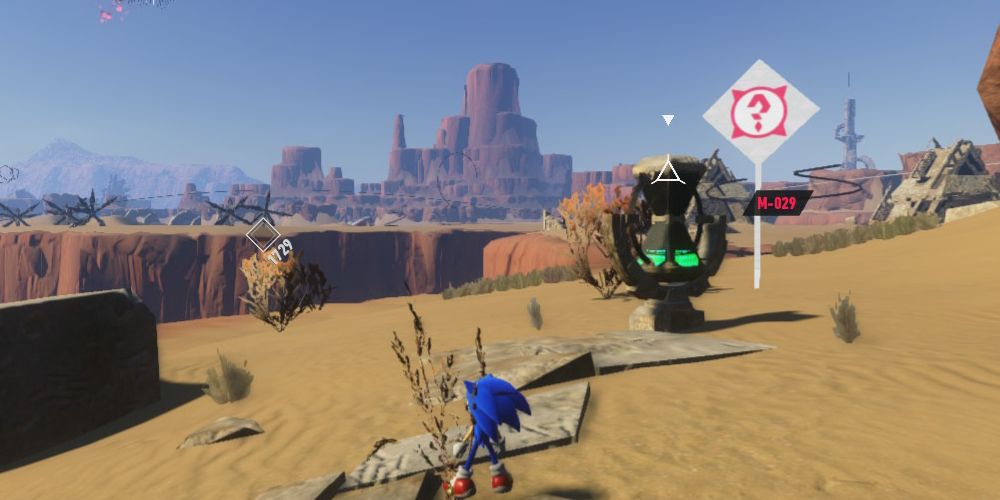 Hit the hourglass then race to the top of the nearby plateau. Beware of the grind rails on the way up, as they have boosters at the end that will shoot you off the plateau; jump off before you hit them! 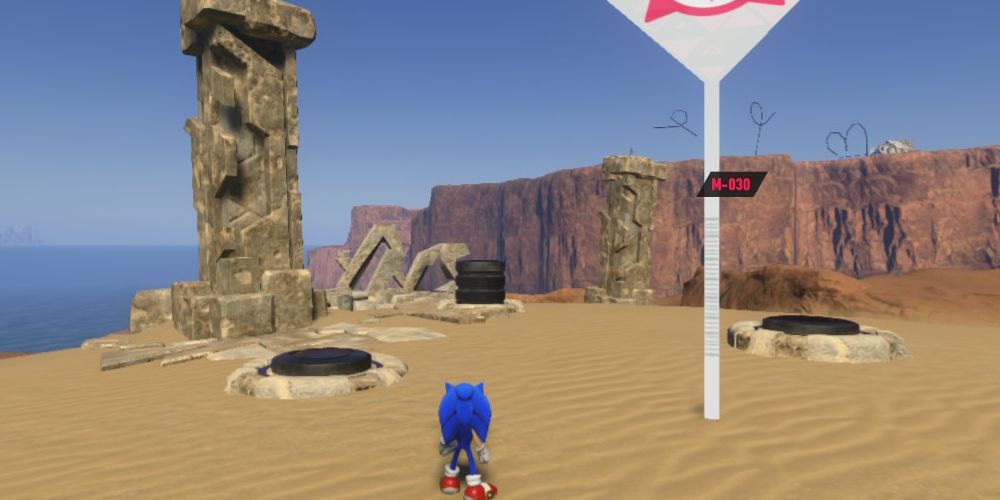 Step on the two regular buttons to activate them. The third button requires more force; use Stomp repeatedly on top of it until it lights up. It should take three attacks. 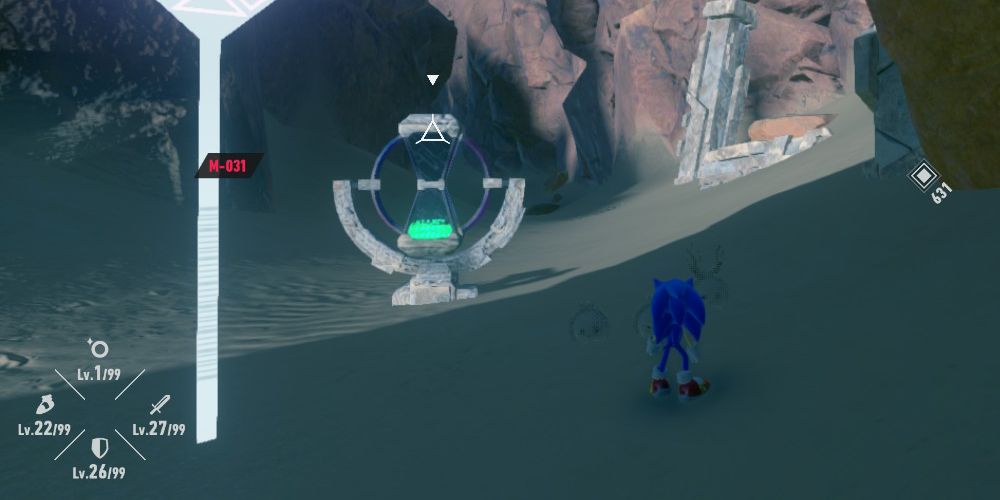 Use Homing Attack on the hourglass to start the timer, then run along the canyon floor hitting all the targets as you go. You’ll need to strike a balance between boosting for speed and slowing down for accuracy. 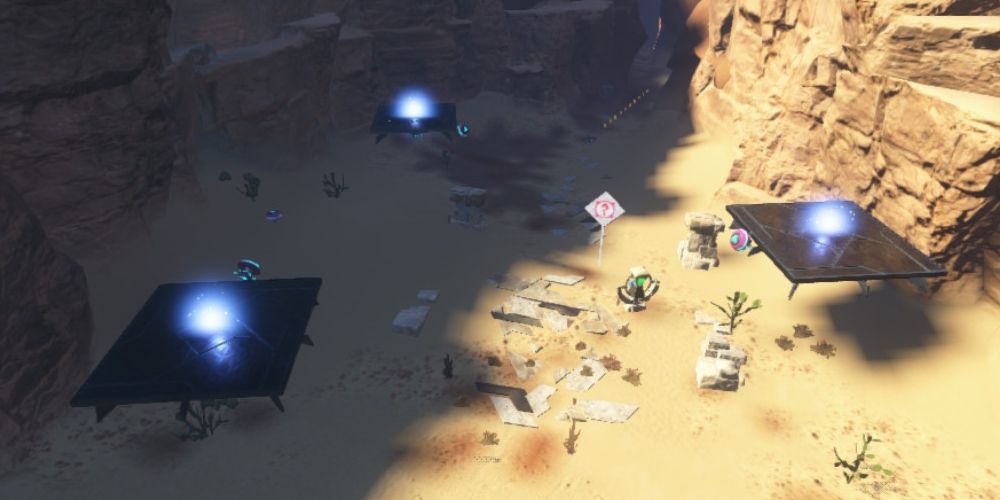 Attack the hourglass to make three platforms appear. Use Homing Attack to reach the springboard attached to the nearest one, then use Cyloop to activate the glowing orb when you land. Use the springboard to reach the next platform, then do the same thing once more. When all three orbs have been activated within thirty seconds, the Challenge is completed. 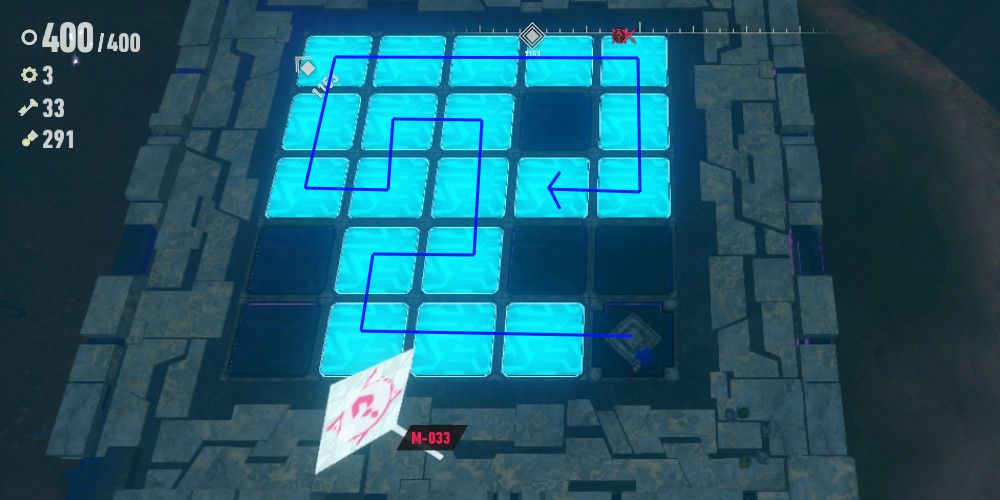 Follow the diagram above to step on the lit tiles once each without stepping off. 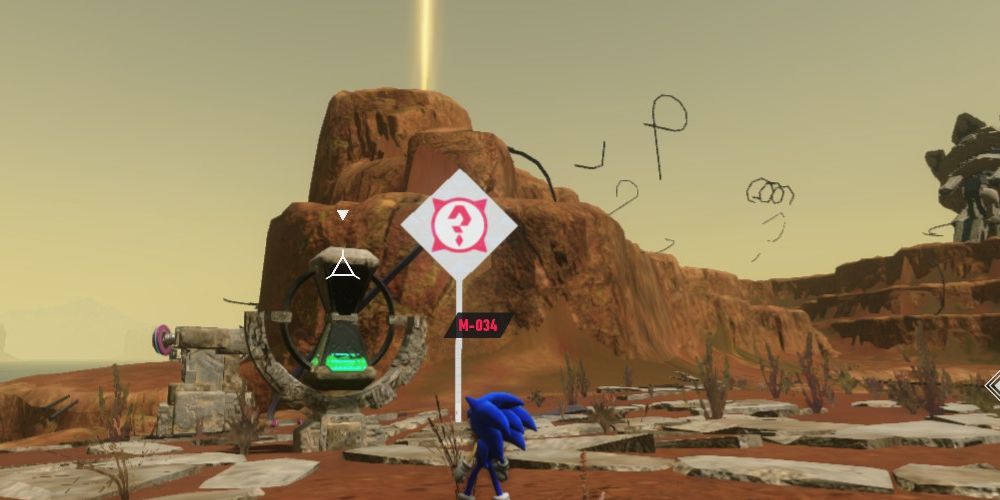 Hit the hourglass with a Homing Attack to start the Challenge. Use the spring in front of you to get a fast start, and use every booster, rail, and platform you see to follow the path to the top of the plateau. There’s enough time that you can afford to make mistakes, but you’ll be in much better shape if you take your time and don’t overshoot. 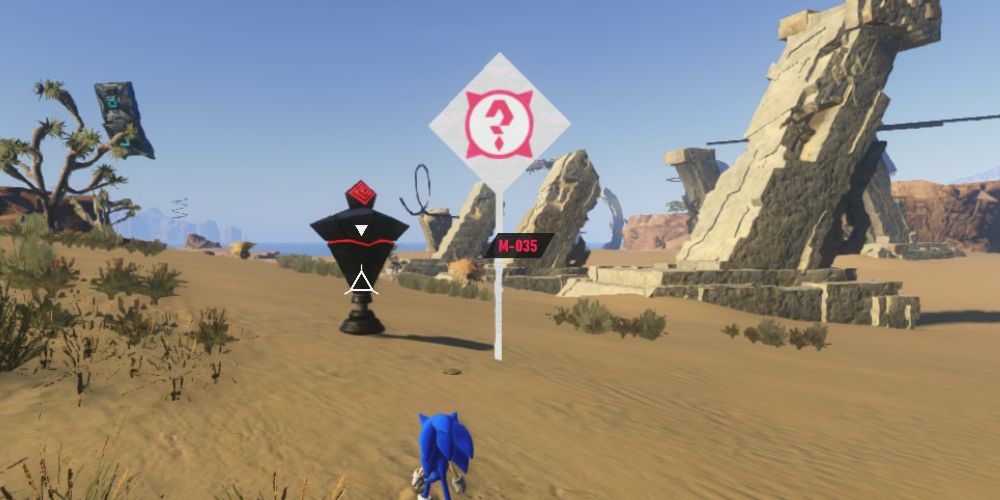 Hit the punching bag for a total of one hundred damage within the time limit. A Stomp at the very end of the timer should put you well over the necessary threshold. 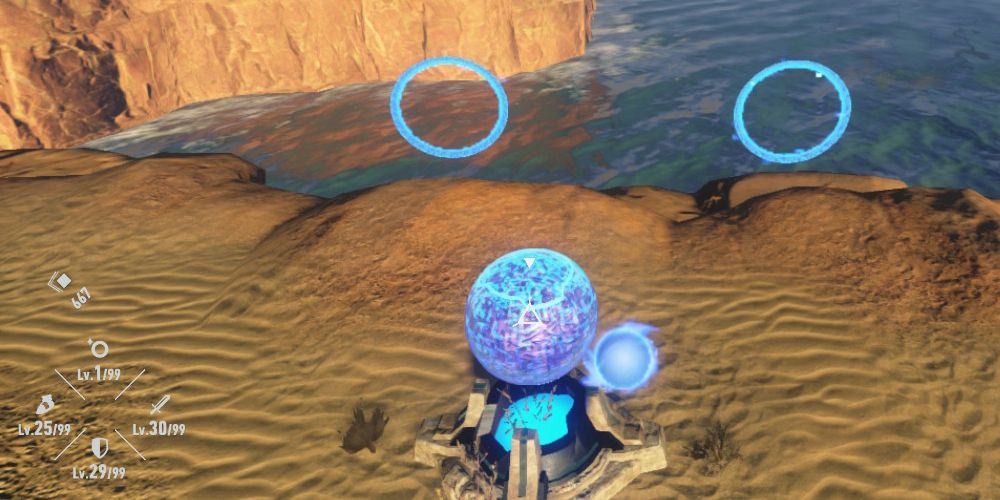 Use Cyloop to activate the pedestal near the cliffside. When the blue ball appears, use Homing Attack to hit it through one of the hoops off the cliff. When you’ve gotten the ball through both hoops, the Challenge is completed. 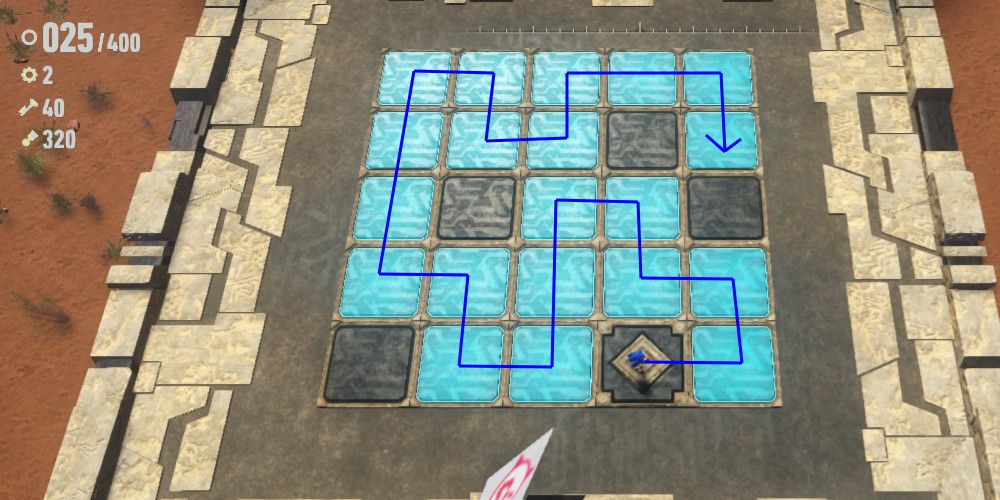 Walk on the grid so that you only step on each lit panel once. Follow the diagram above for a winning path. 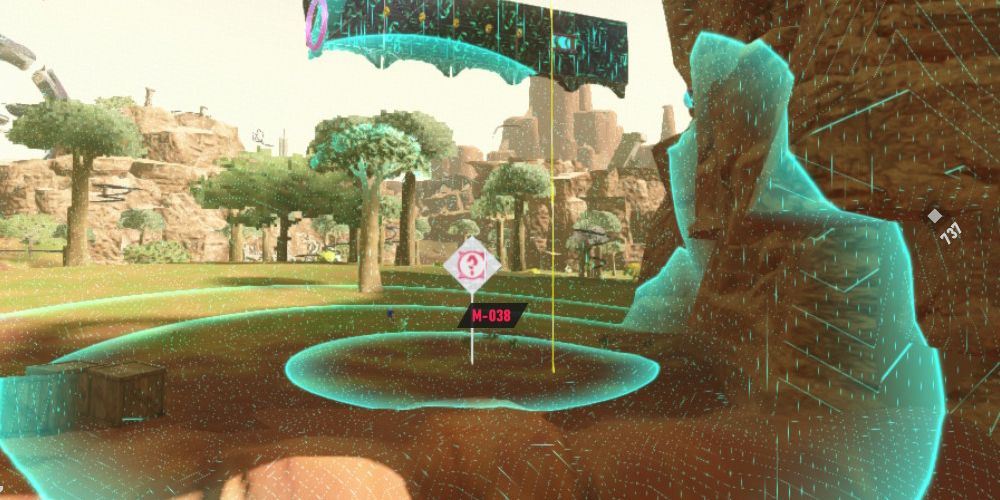 Look for a glowing orb moving around the area. Approach it and hold the attack button while you’re within arm’s reach of it. If you stay near it long enough for the attack to fully charge, you’ll catch the orb and solve the Challenge. 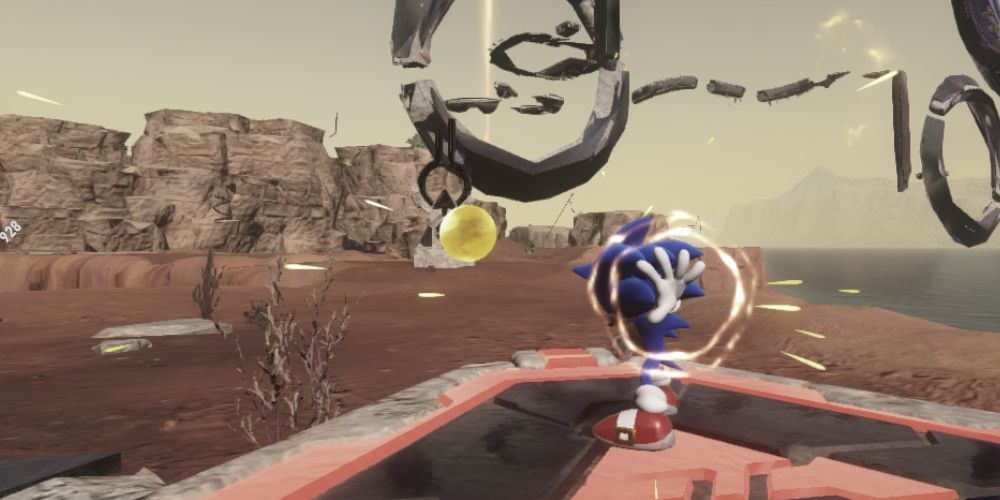 Stand on the triangular pedestal to start the Challenge. A cannon will fire projectiles at you: parry by holding both dodge buttons simultaneously. When you’ve parried three shots, you’ll receive your reward.

After parrying any attack, you need to release the buttons and press them again to set up a new parry. 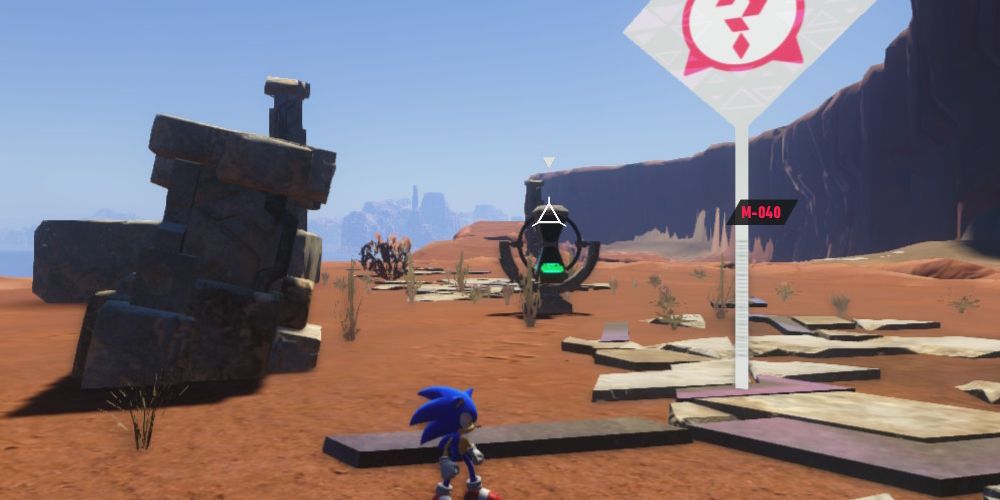 Hit the Hourglass to start the timer, then run through all the blue targets along the course in front of you. Avoid Boosting, as this can cause you to overshoot and send you over the edge of the cliffs. Even without Boosts, you can finish the Challenge with a good thirty seconds left over. 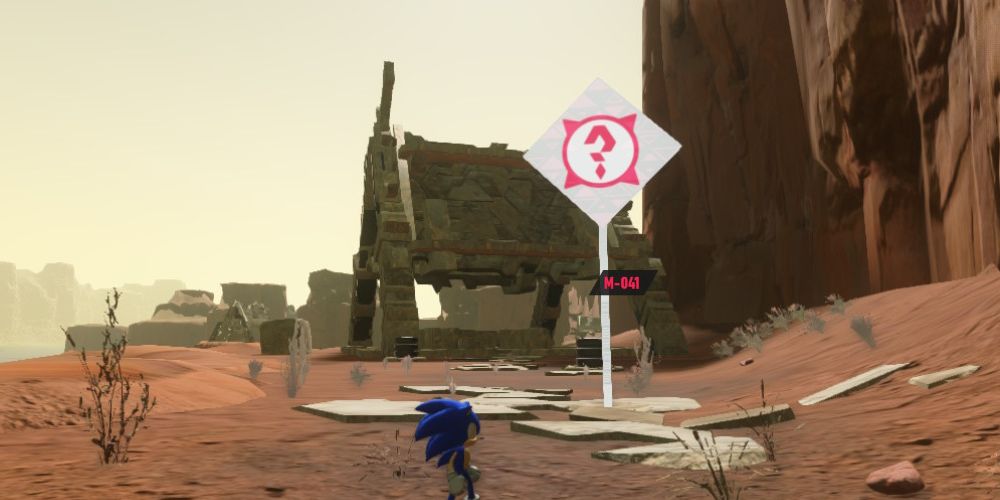 Stomp on each of the buttons near the ruined house three times; when all three are lit up, you’ll receive your reward. 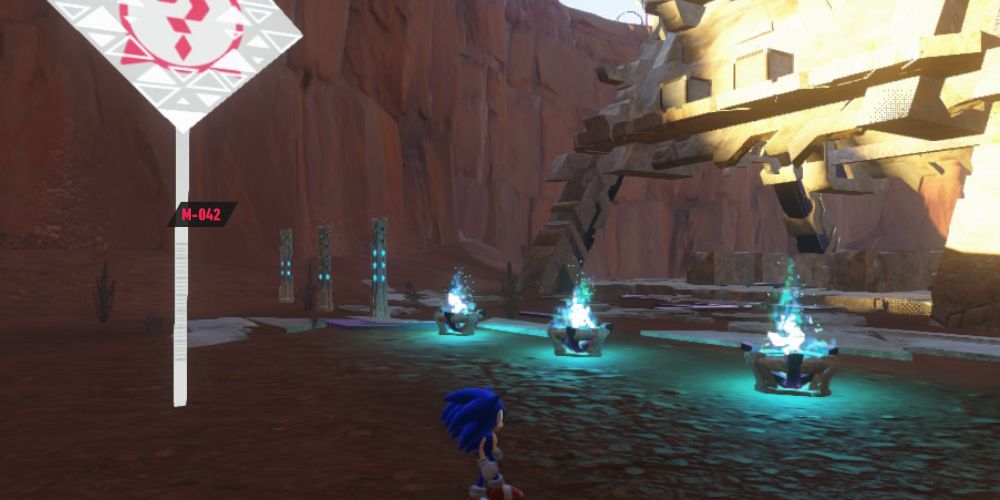 Note the lights on the pillars next to the torches. Use Cyloop to extinguish the torches in the order indicated by the number of lights on each pillar. In the image above, the center pillar has one light, the left has two, and the right has three, indicating that the torches should be extinguished in that order. 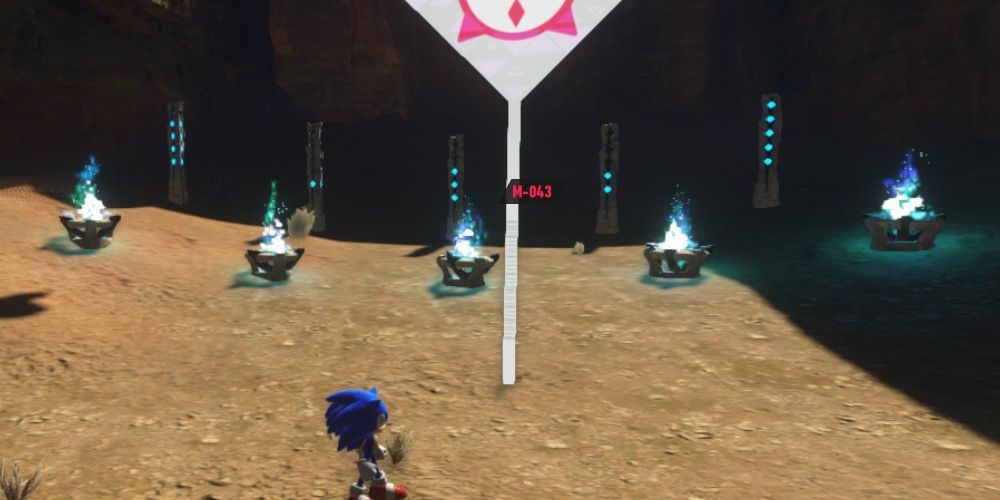 This Challenge is identical to M-042, except that it has more torches. Extinguish them with Cyloop in the order indicated by the nearby pillars. 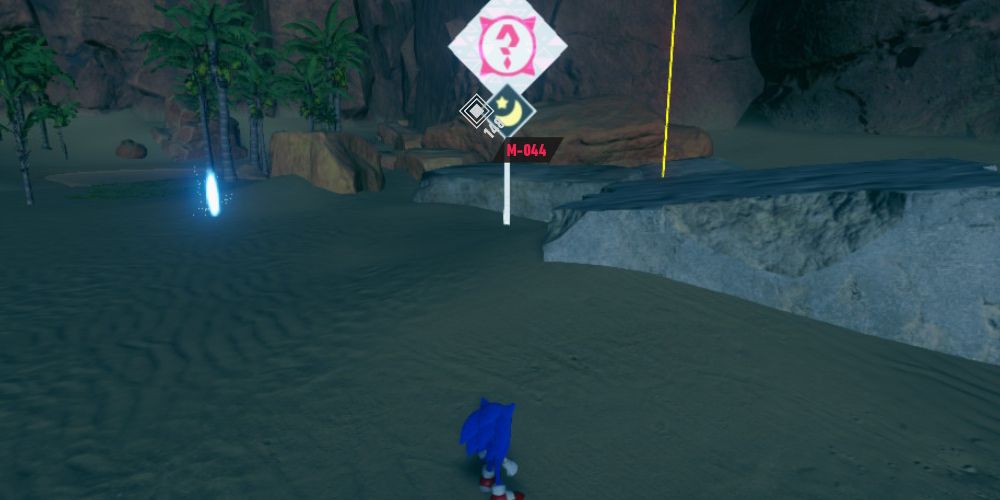 Use Cyloop to activate all the glowing lights in the oasis. There are five in total, and most appear near the water around Hermit Koco. They only appear one at a time, so after activating one stand still and rotate the camera until you see the next one.

As an added bonus, there’s a Vault Key buried nearby – look for a treasure icon! 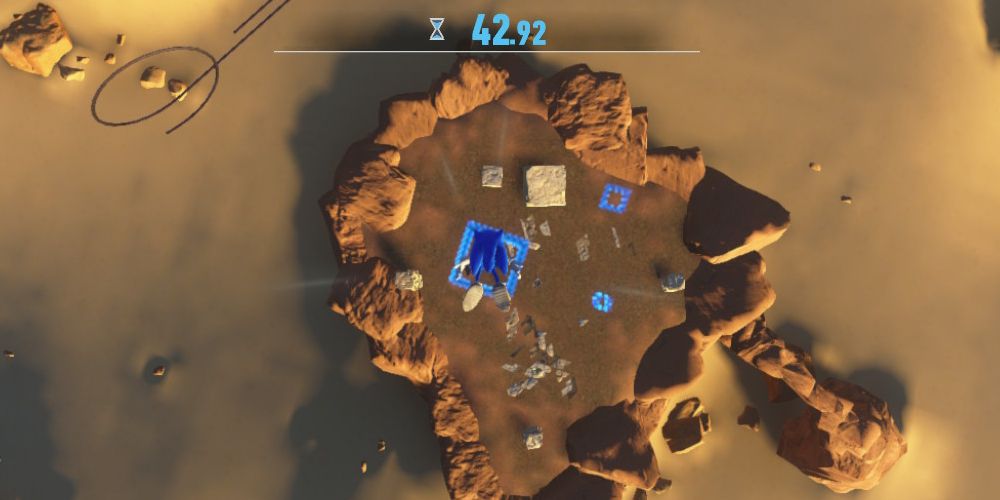 Hit the hourglass to begin the Challenge, then use Homing Attack on the nearby flower to launch into the air. On the way down, hit all the square targets to finish the Challenge. 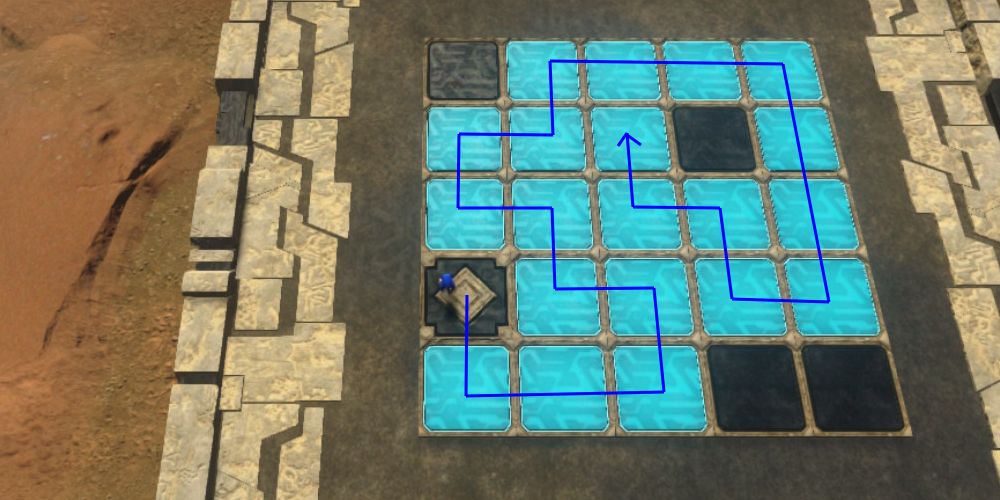 Step on the tiles following the diagram above so that you hit each lit tile exactly once. 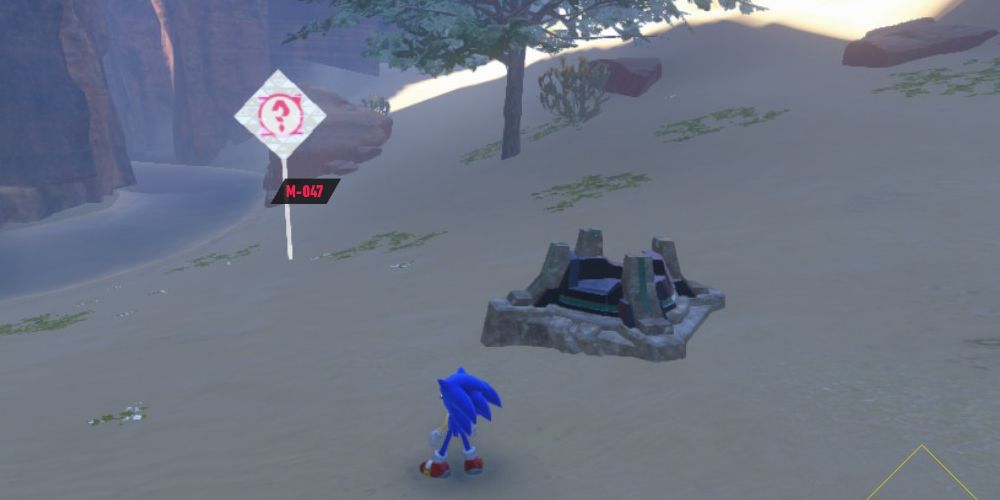 Use Cyloop to activate the pedestal, then use Homing Attack to knock the ball through each of the hoops that appear. The higher hoop requires that Sonic hit the ball from below to get extra altitude, so don’t jump before using Homing Attack when trying to hit it. If you still can’t get the angle right, try moving closer to the ball before attacking. 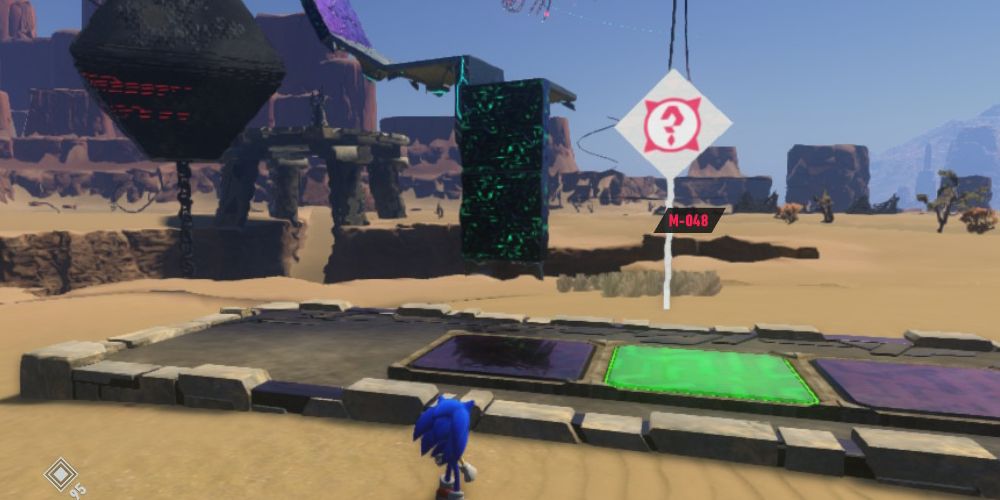 Stand on the green tile to begin, then dodge left and right as necessary to hit each tile as it lights up. The Challenge will complete after nine correct inputs. 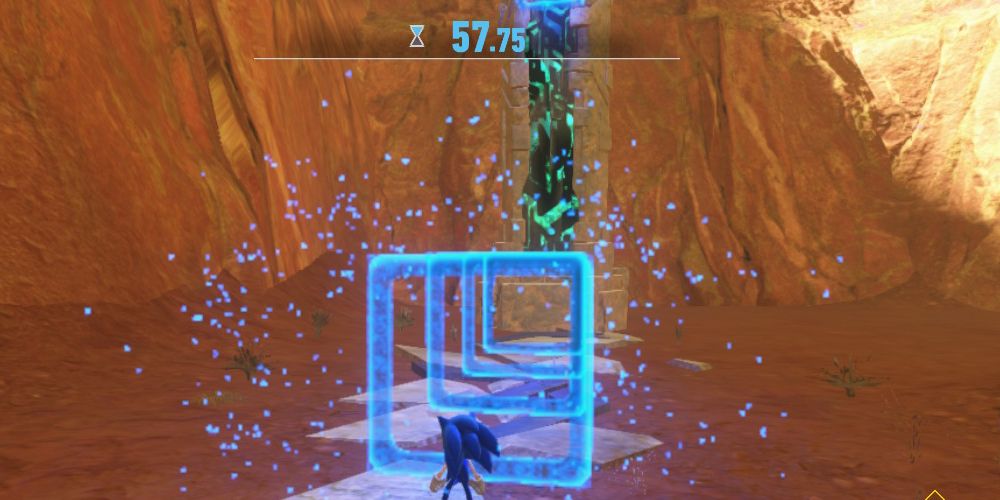 Attack the hourglass to start the timer. Follow the targets to the pile of rubble, then use Cyloop to repair the pile. Run up the pillar that’s built to hit the remaining targets. 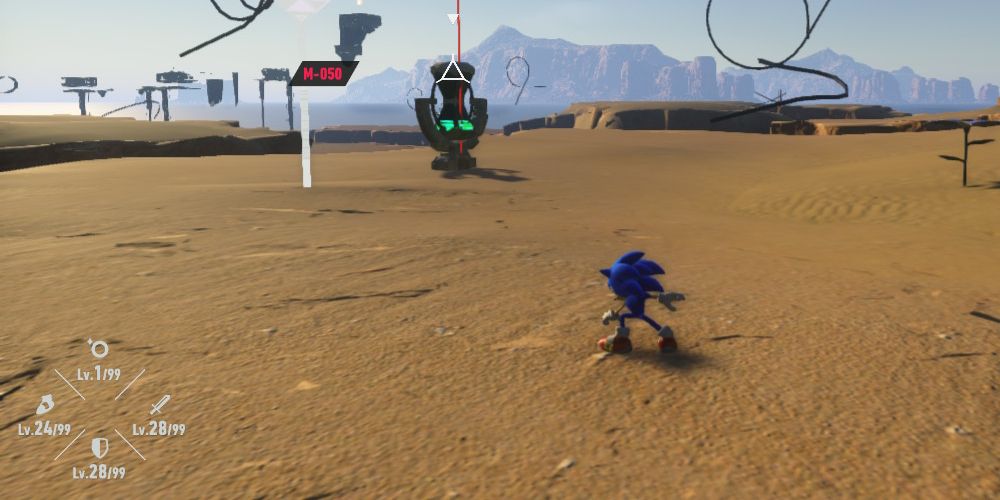 Hit the hourglass with a Homing Attack to start the timer, then do the same to the nearby flower to fly into the air. Hit all three targets on the way back down to complete the Challenge. 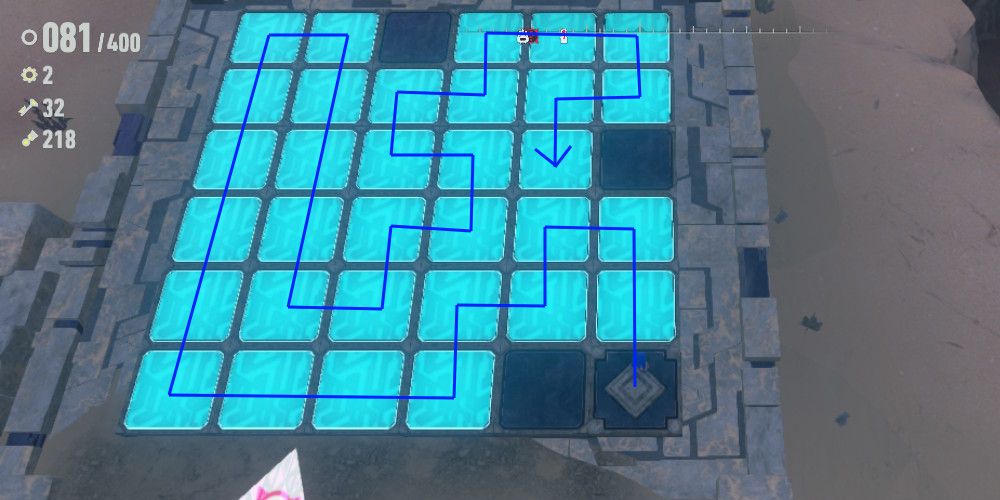 Walk on the lit tiles according to the diagram above to touch them all once without stepping on a dark tile. 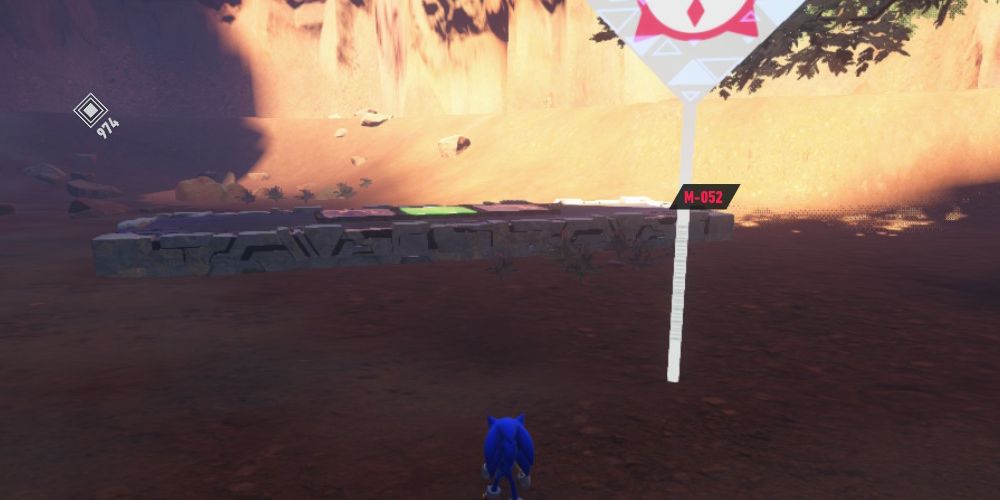 Stand on the green tile to begin the Challenge. Dodge left and right to hit the tiles as they light up. You’ll complete the challenge after twelve correct inputs. 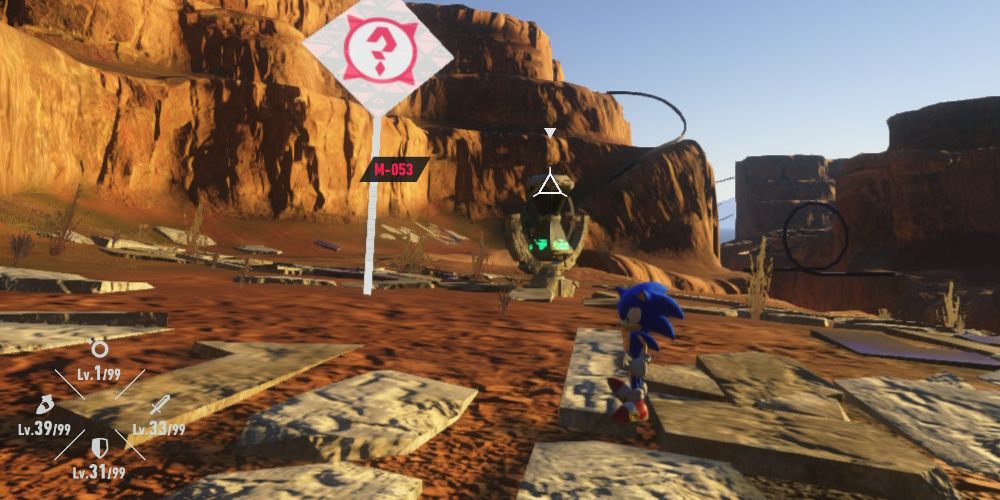 Use the spring at the bottom of the cliff to get started. Follow the boosters and rails, and they’ll take you straight to the goal at the top of the cliff! 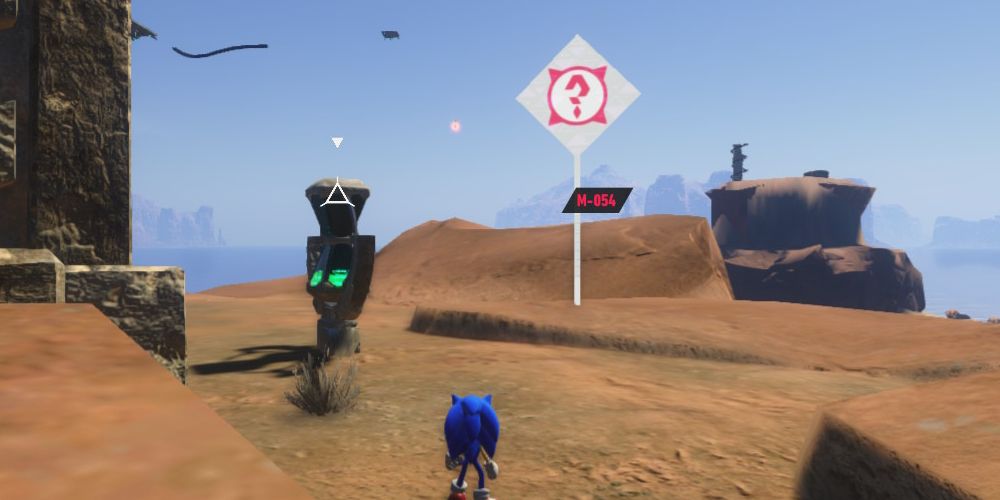 Start the Challenge by attacking the hourglass, then run toward the springboard that it points you to. Follow the course, hitting every target along the way, to complete the Challenge.