Sniper Elite 5 includes nine missions in its main storyline, each filled with stealth-packed action that'll keep you playing for hours. There are usually multiple routes you can take and optional objectives to complete in each mission.

The Spy Academy mission isn't the longest one in Sniper Elite 5, but it still has some interesting twists and set pieces. As such, here's a walkthrough for both the mandatory and optional objectives you'll have to complete in this mission.

How To Start The Spy Academy Mission 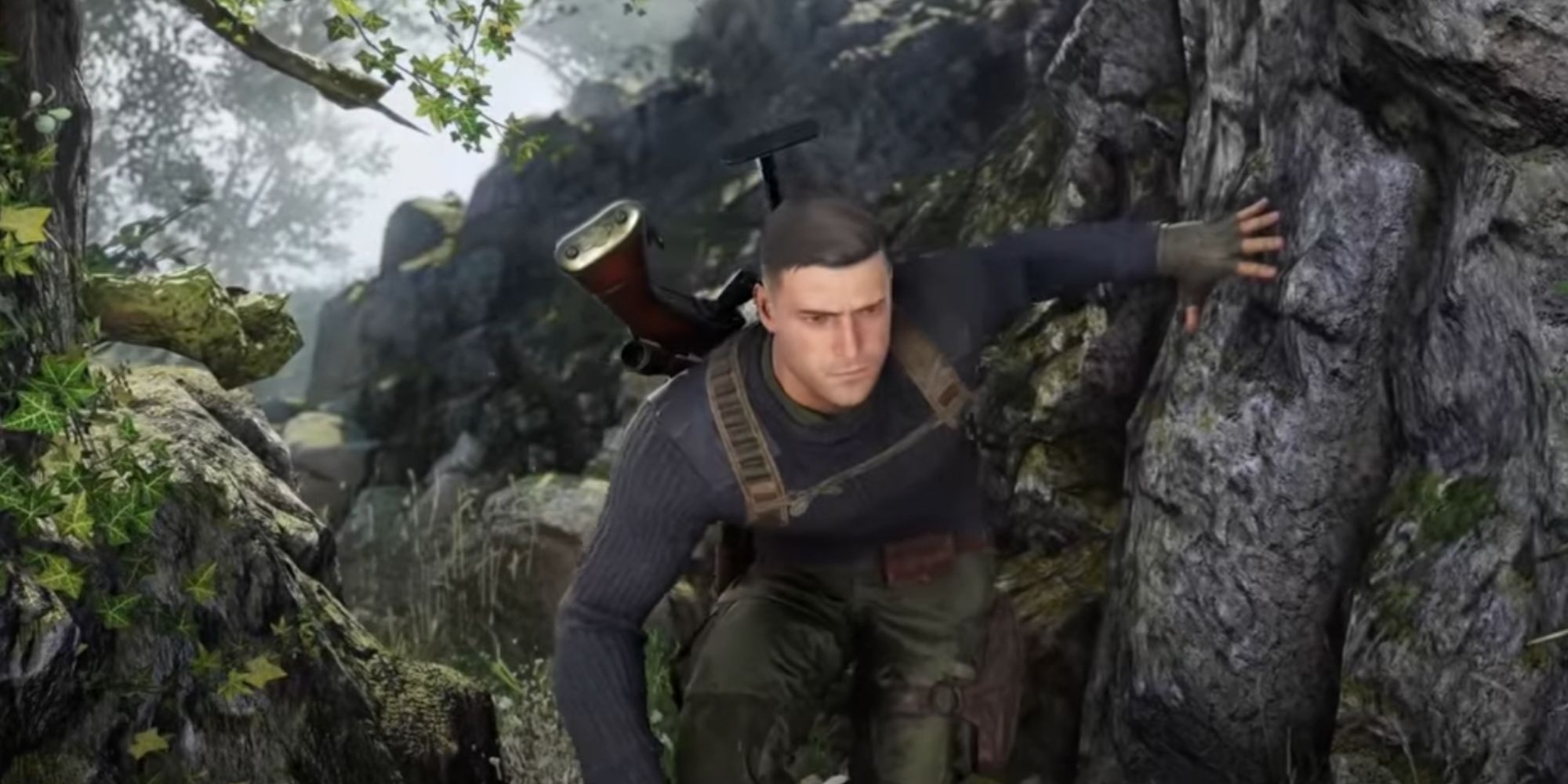 After launching Sniper Elite 5, select the Campaign option on the main menu. Here you'll have a few options, including choosing your mission, which difficulty to play on, and whether or not you want to play with the Axis Invasion feature. ​​​​​​

Axis Invasion allows other players to invade your mission while it's ongoing, then they can then try to kill you to win. If you'd rather not fight with enemy players, then make sure turn off Axis Invasion.

After customizing all of your settings, you can start the mission at the bottom of your screen, and after a short cutscene, you'll spawn onto the map. 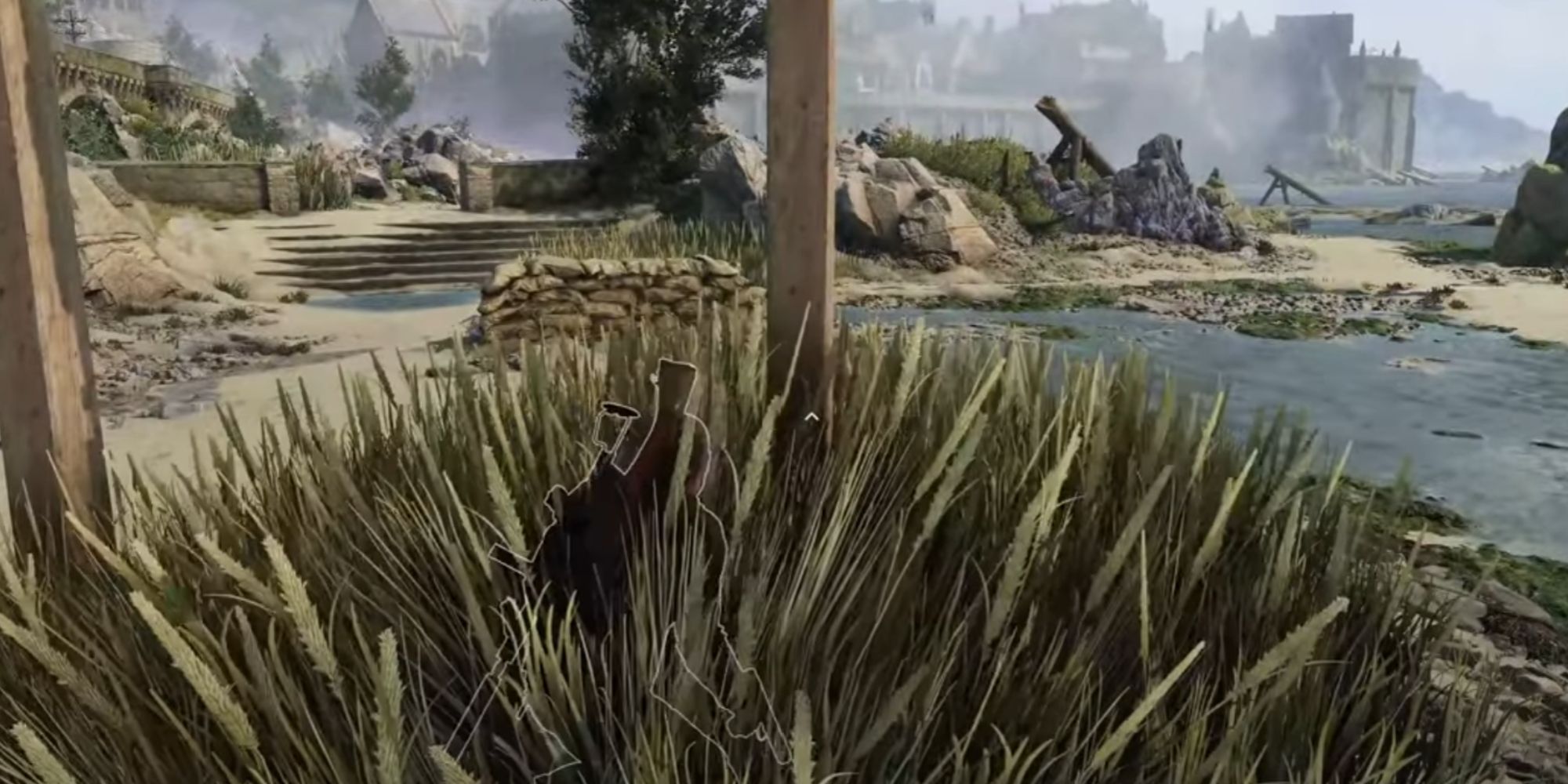 You'll spawn into the mission on the left side of a bridge, which conveniently has a beach underneath it that you can use to get past without the soldiers detecting you. Before doing anything or moving down to the beach, you should equip your rifle and get a few long-distance kills on the beach, since you'll be so far away that the soldiers won't detect you.

After killing every soldier possible from your position, use the zipline on the left-hand side of the bridge to quickly travel down toward the beach without having to walk. Upon setting foot on the beach, you'll notice that there's grass in small patches nearby, so you can use that to hide.

There are also a handful of snipers surveing the beach from castle surroundings. So, keep an eye out for their glint, and take them out before they spot you.

You'll encounter two soldiers after ziplining; however, whether or not they're still alive is dependent on whether you killed them with your rifle earlier. If they are there, then you can use melee stealth attacks or a grenade to try to take them out at the same time.

Travel to the next patch of grass, and there's another soldier walking around the area. Since this enemy is alone, you can simply sneak up behind him using a melee attack and continue moving further towards the island. You can choose to walk under the bridge and continue your journey on the right side of the beach if you would prefer, but it's easier to stick to the left side of the beach due to how many soldiers are on each side.

Once you reach the final patch of grass near the island, there's one soldier in the area. Depending on where he is at the time, you may be able to sneak past this enemy. If not, use a bottle or whistle to get him to investigate you inside the grass, then use a melee attack. 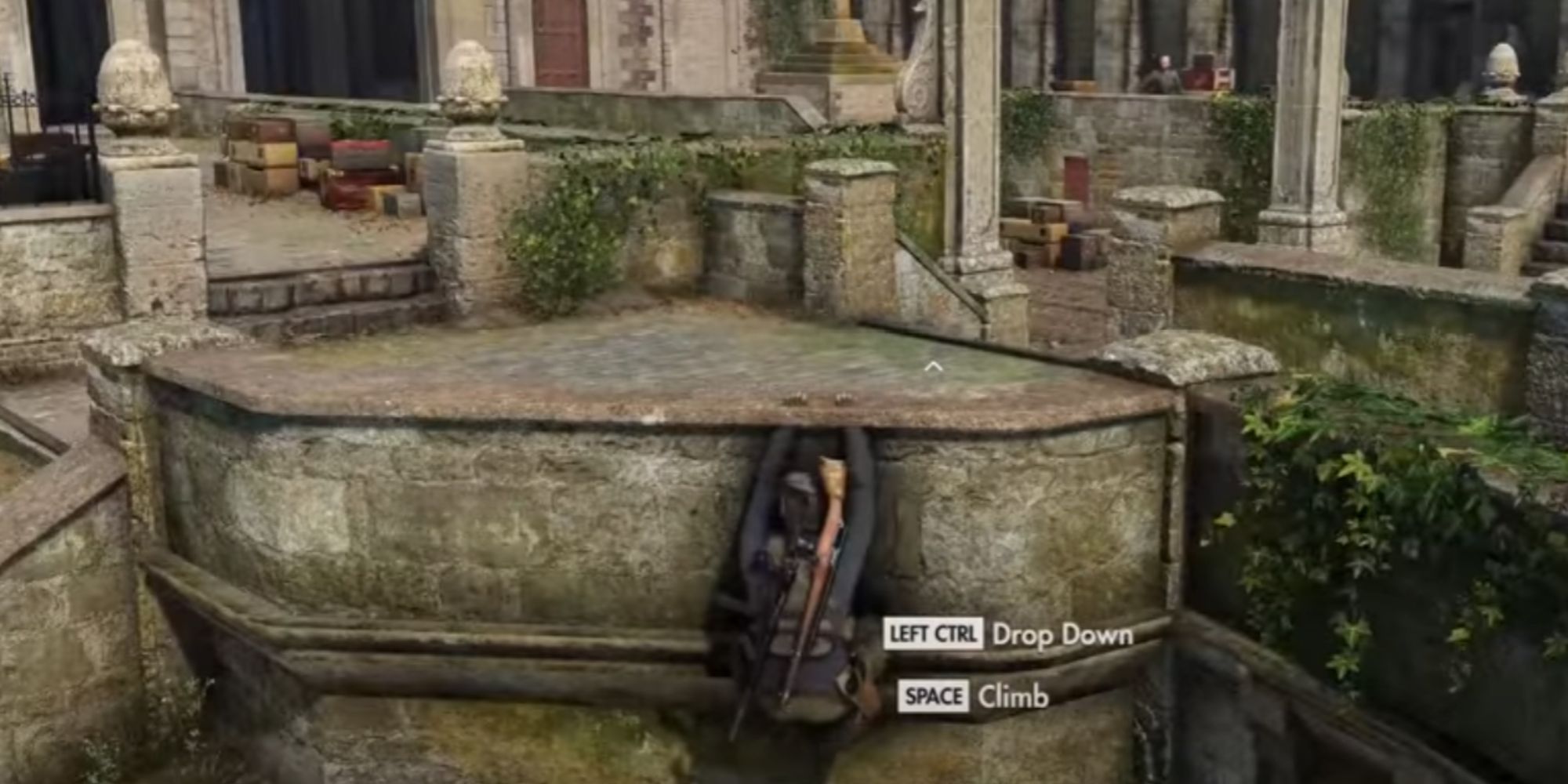 There's a small ledge and staircase on the left side of the beach that you can climb up, but there may be a soldier patrolling in front of it if you didn't kill him earlier using your rifle. You'll see a patch of grass on the right side of the staircase, which you can use to hide from him.

Throw a bottle onto the opposite side of the ledge, the soldier will walk towards it, turning his back long enough for you to climb up or defeat him with a melee attack. Once you climb up, there's a soldier patrolling on the left-hand side of the staircase. Wait until he walks to the left, then use a melee attack to kill or incapacitate him. 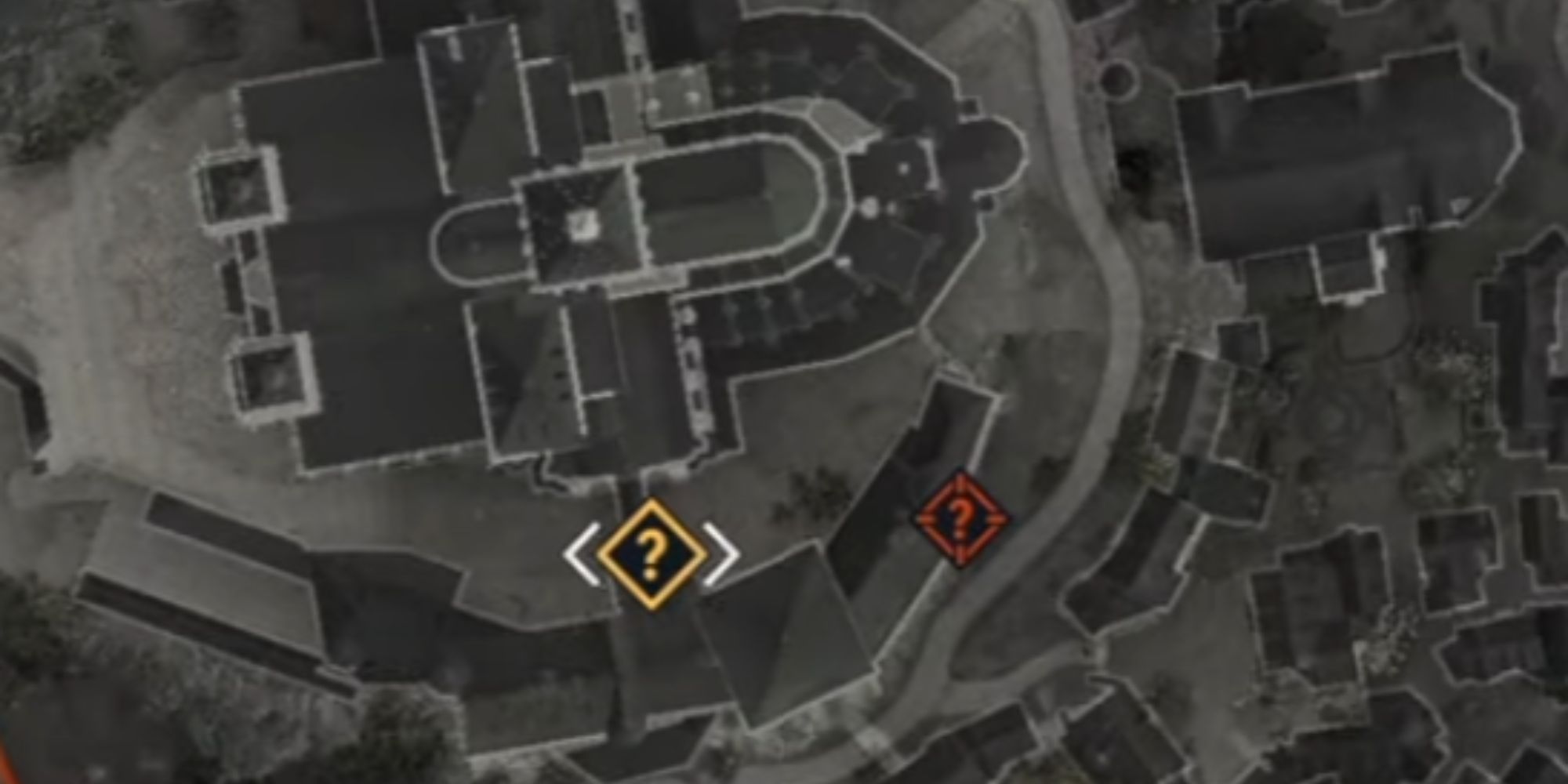 There are many soldiers patrolling the island in every direction, so you need to stay alert at all times to complete your mission. Your goal is to travel to the location above, which is where the meeting is taking place. From the ledge that you just entered from, travel toward the large doorway to your left.

There's a soldier on the platform right of the doorway, but you can sneak past him if you wait until he's not looking in your direction. 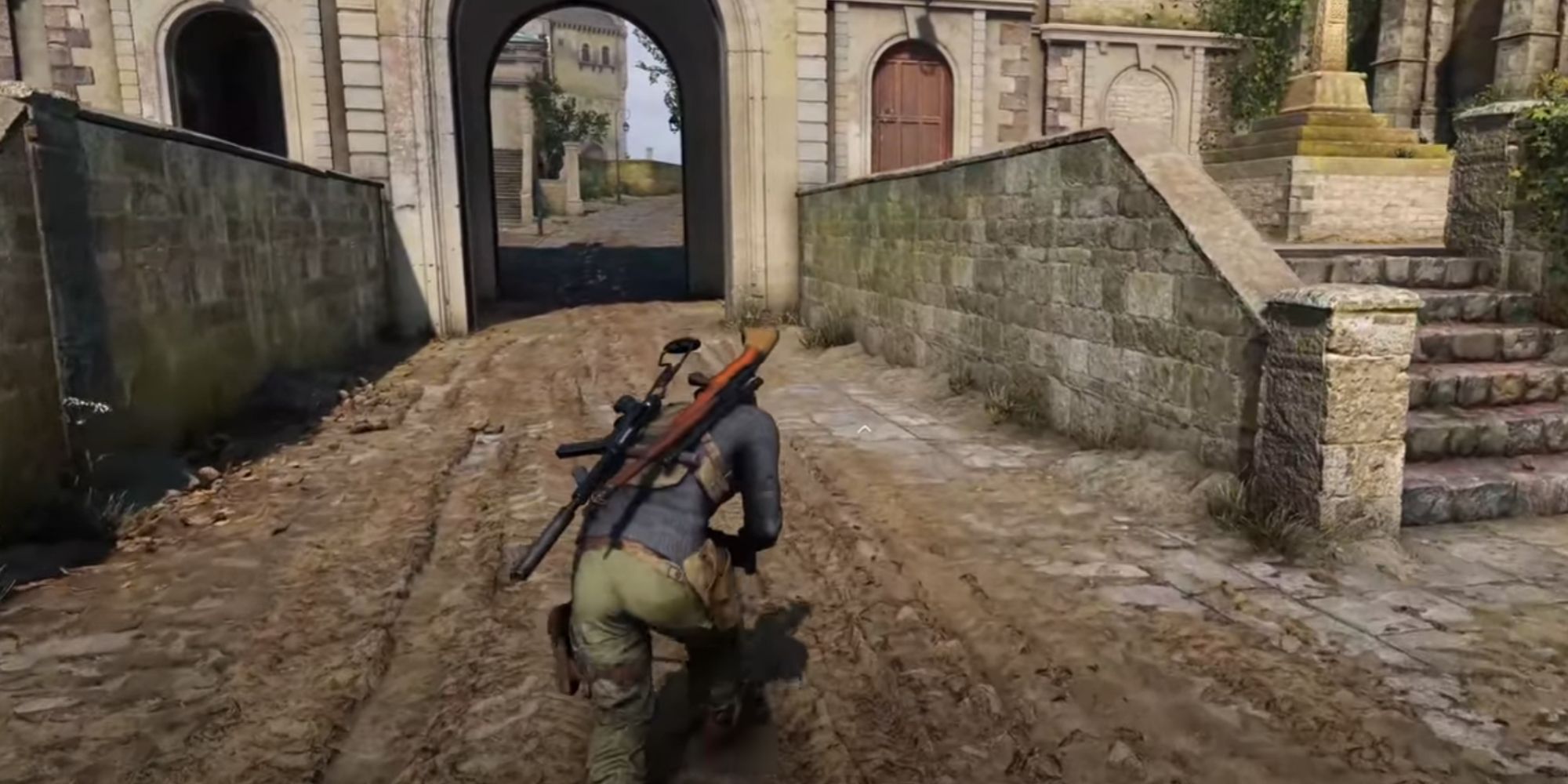 Head straight through this doorway, and you'll come across the road on the other side. Although it requires caution and stealth, a good course of action from this point onward is to take a right and stick next to the road. Continue traveling north, upwards in the city towards the church, hiding in a road-side building or behind an object whenever a soldier or vehicle walks past you on the road. 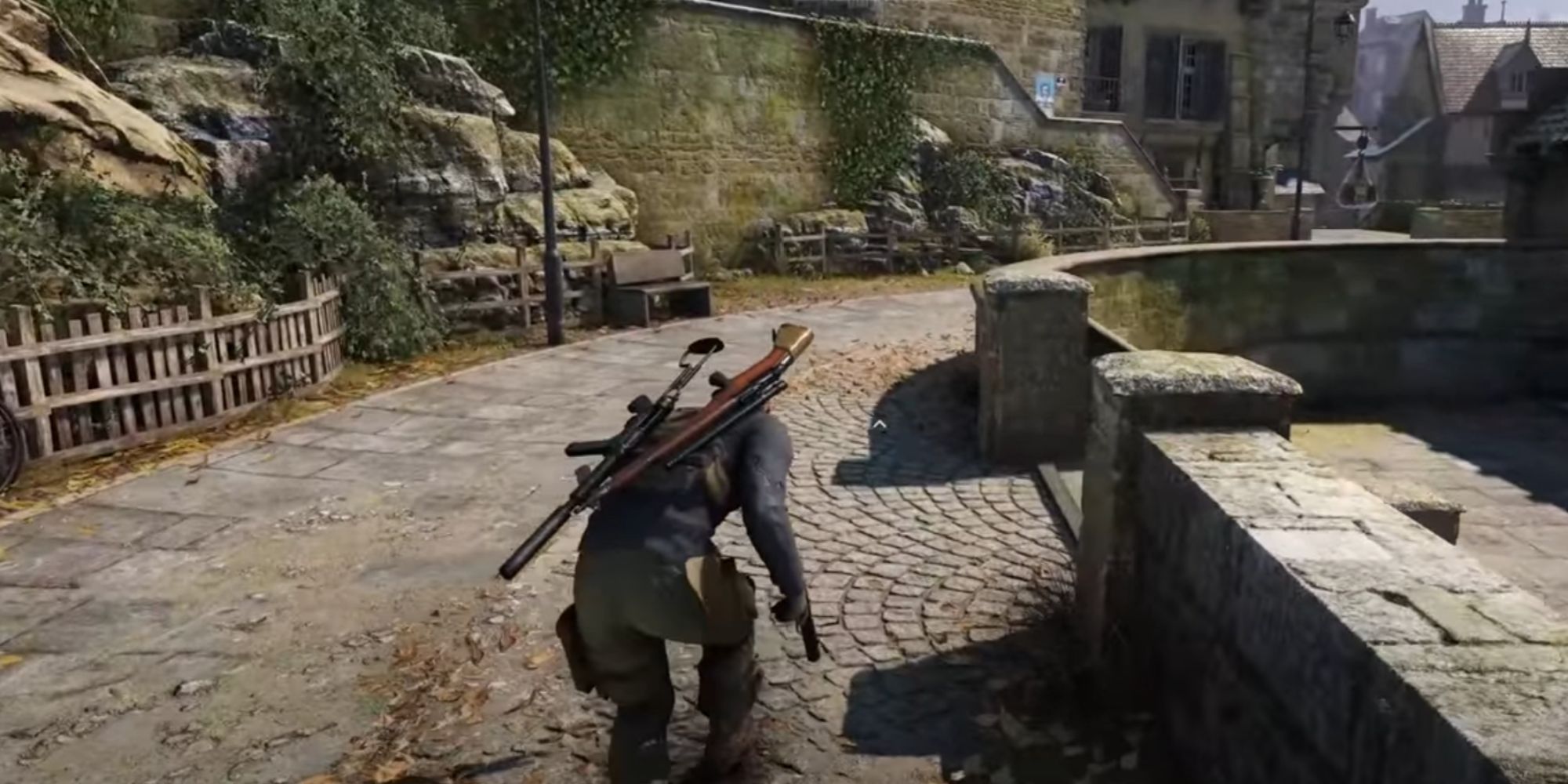 Many of the buildings in Spy Academy have interiors, so you can enter and exit them quickly if a car comes your way. Additionally, there are barricades and other objects you can use to hide all over the island, so following the main road upwards is easy if you're cautious of your surroundings. 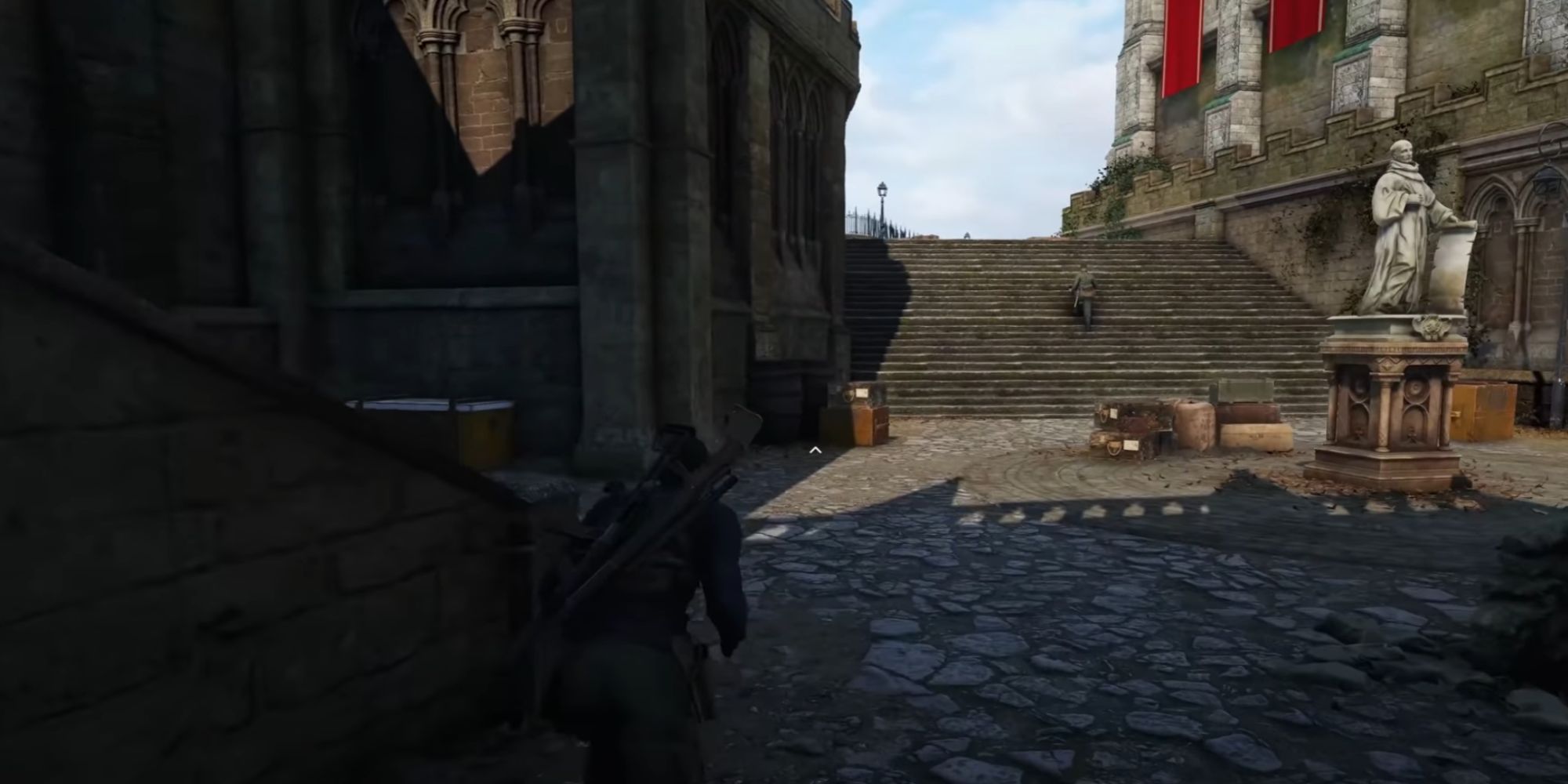 Once you reach the church's exterior, you'll find soldiers walking around each side of it. Head inside using the large entrance on the northern side and hide behind cover. You'll encounter soldiers patrolling on the north side of the church as well, so the best course of action is to use a silenced rifle to kill them from the road before reaching the doorway.

There are initially four soldiers on the church's bottom floor, as you can see in the image below. They're each patrolling the area, but one of them is usually near the eastern side. You can choose to sneak past or defeat them. 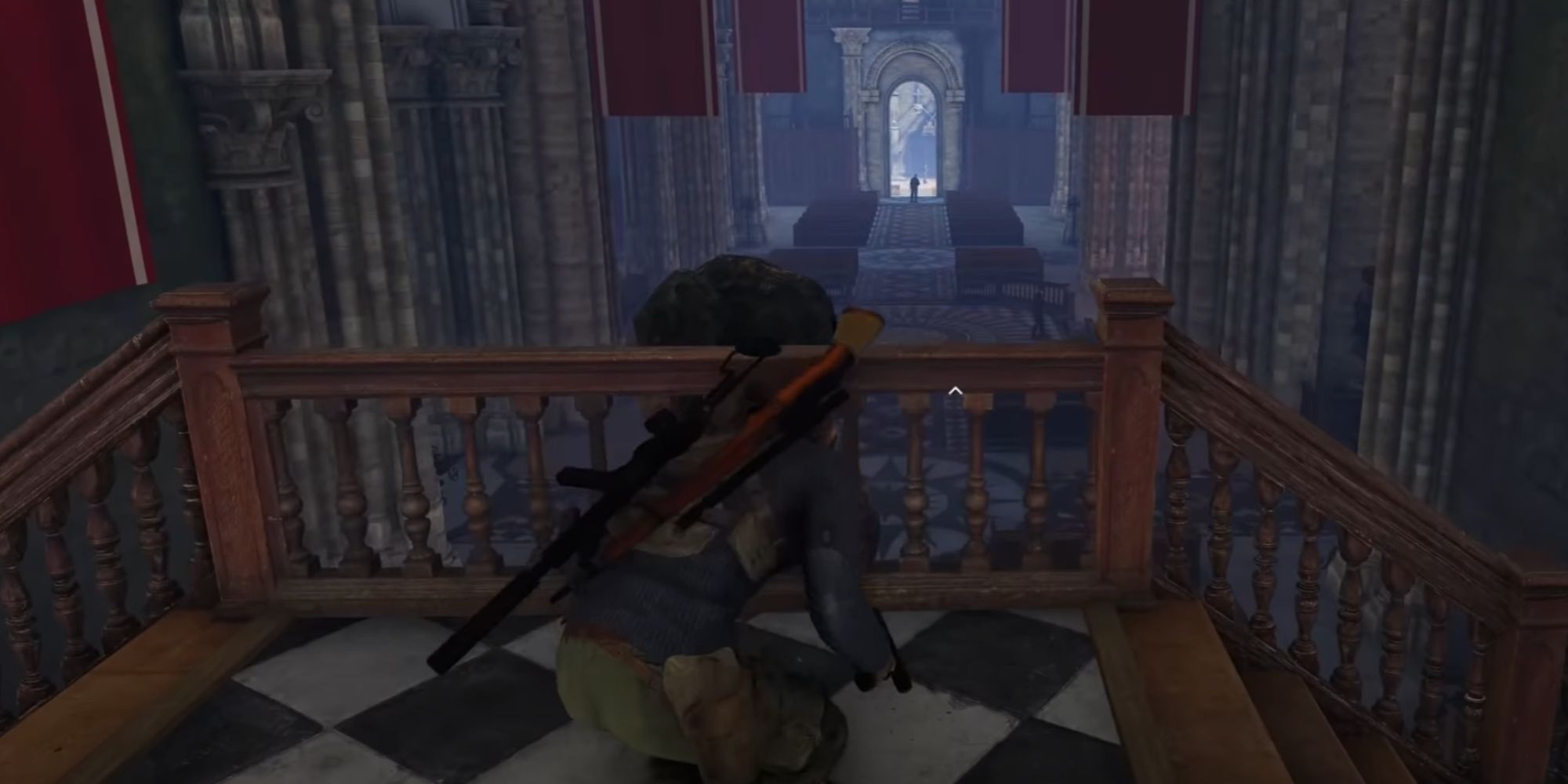 Either way, turn left from the middle and find the stairs on the eastern side of the church. For caution, you should defeat the the soldier on the eastern side if you're taking this path. There's another soldier you need to defeat upon climbing the first set of stairs. 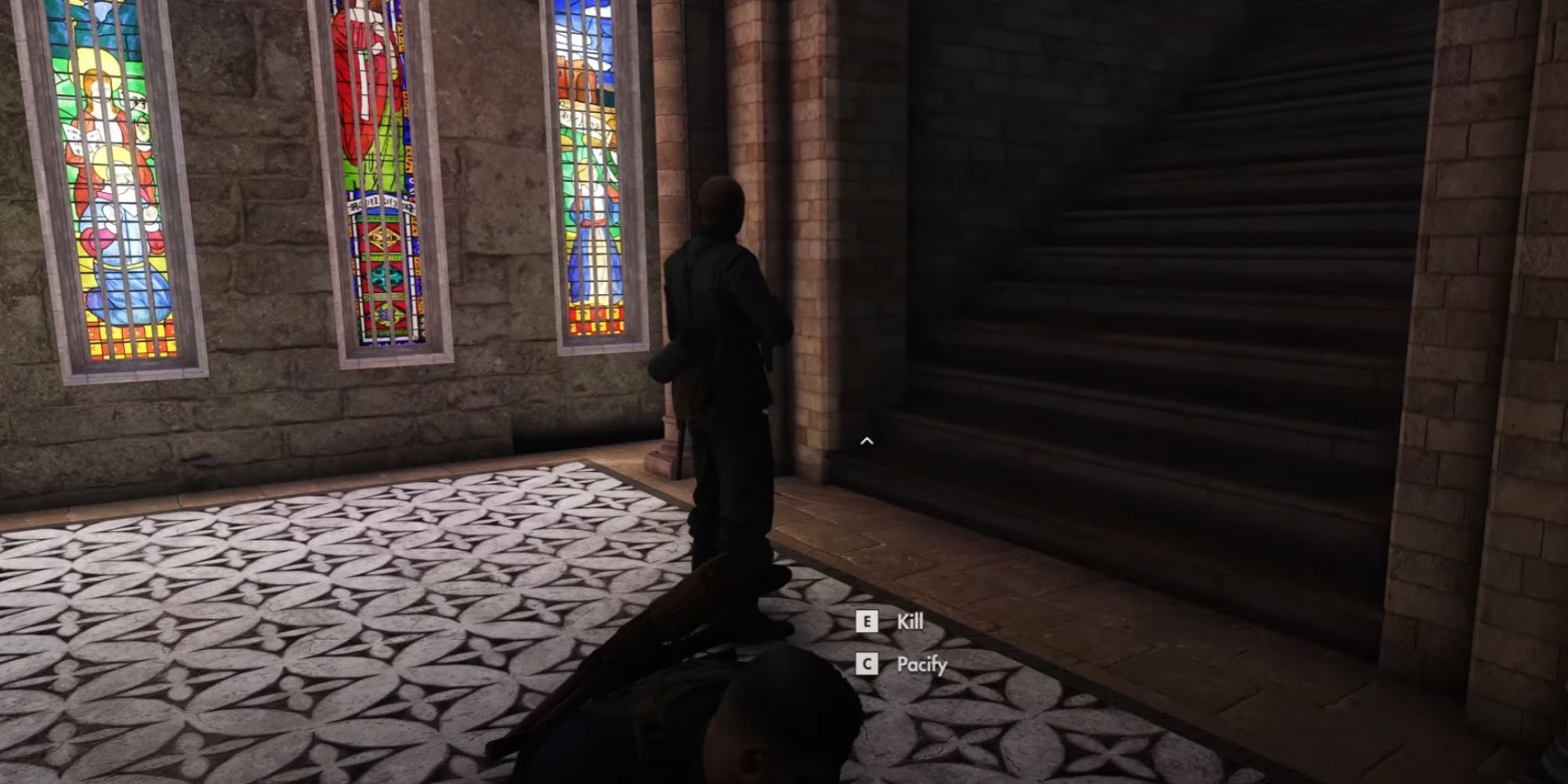 Take a right at the top of the staircase and travel through the doorway until you see a second staircase. Travel up the second staircase, then defeat another patrolling soldier using a melee attack or silenced weapon. You'll now come across a room with two entrances on the left and right side, as well as a ladder in the middle. This is the meeting room's entrance. 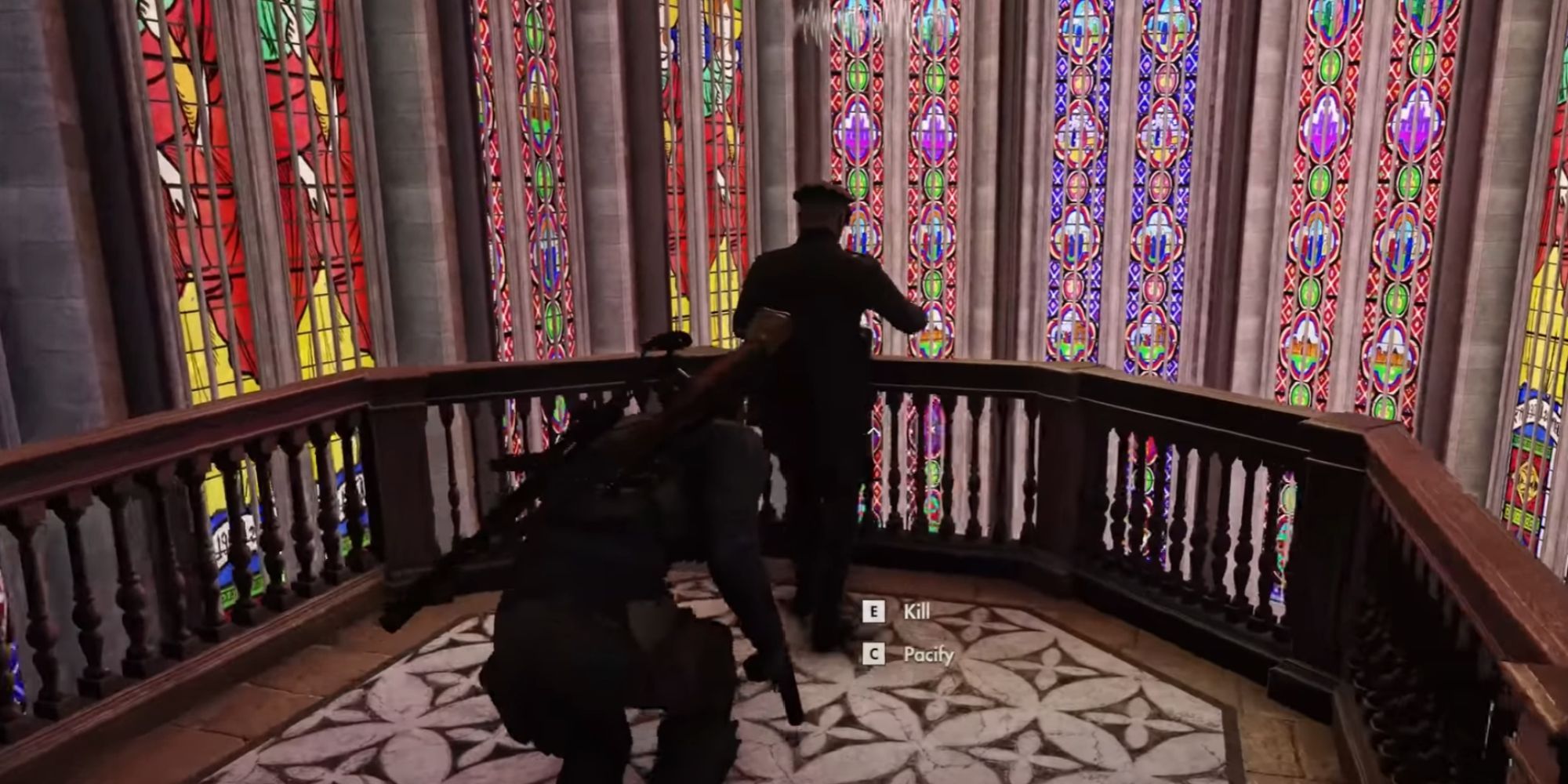 You need to kill or incapacitate the officer who patrols the room with the ladder. He often leans against the church's railing, like you see in the picture below, offering an opportunity to take him out. Upon searching the officer's body, you'll collect the Meeting Room Key and can now open the door. 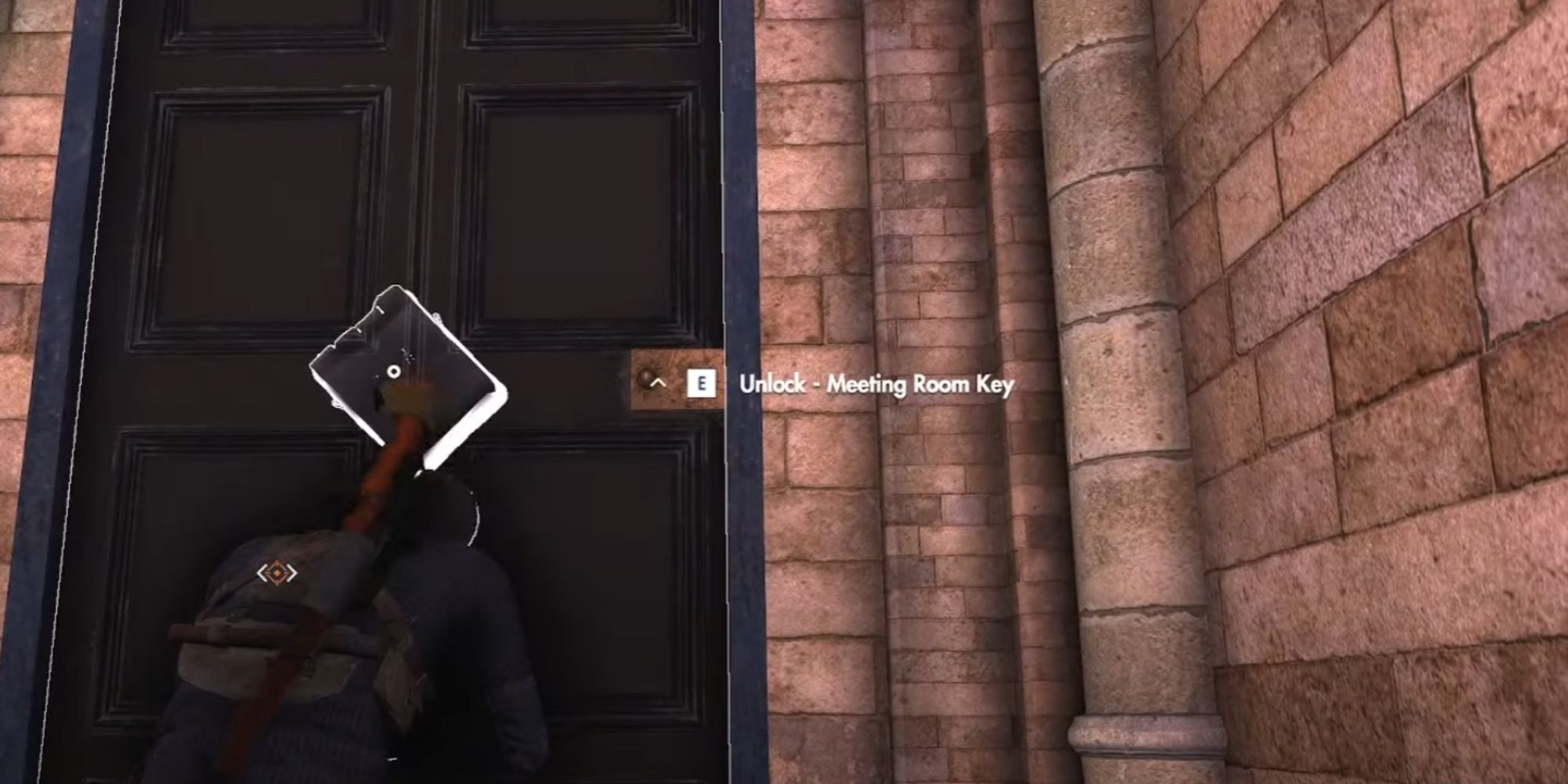 If you use the ladder, then you can wait until the officers leave the room and retrieve the necessary items afterward. If you choose to open the door during the meeting, you'll need to kill everyone inside.

You'll also unlock the optional objective to kill the spy instructor if you listen to the conversation, so it's easier to let the officers talk if you want to complete every objective in the Spy Academy mission. Once everyone is dead, or they've all left the room, walk inside and collect the Dossier on the long table. Now that you have the Dossier, you can exit the church via the zipline straight through the meeting room's northeastern door. Then, ride a second zipline on the northern ledge of this platform to reach the ground.

You can exfiltrate or complete any remaining optional objectives. Don't leave this area if you want to kill Fabian Richter. 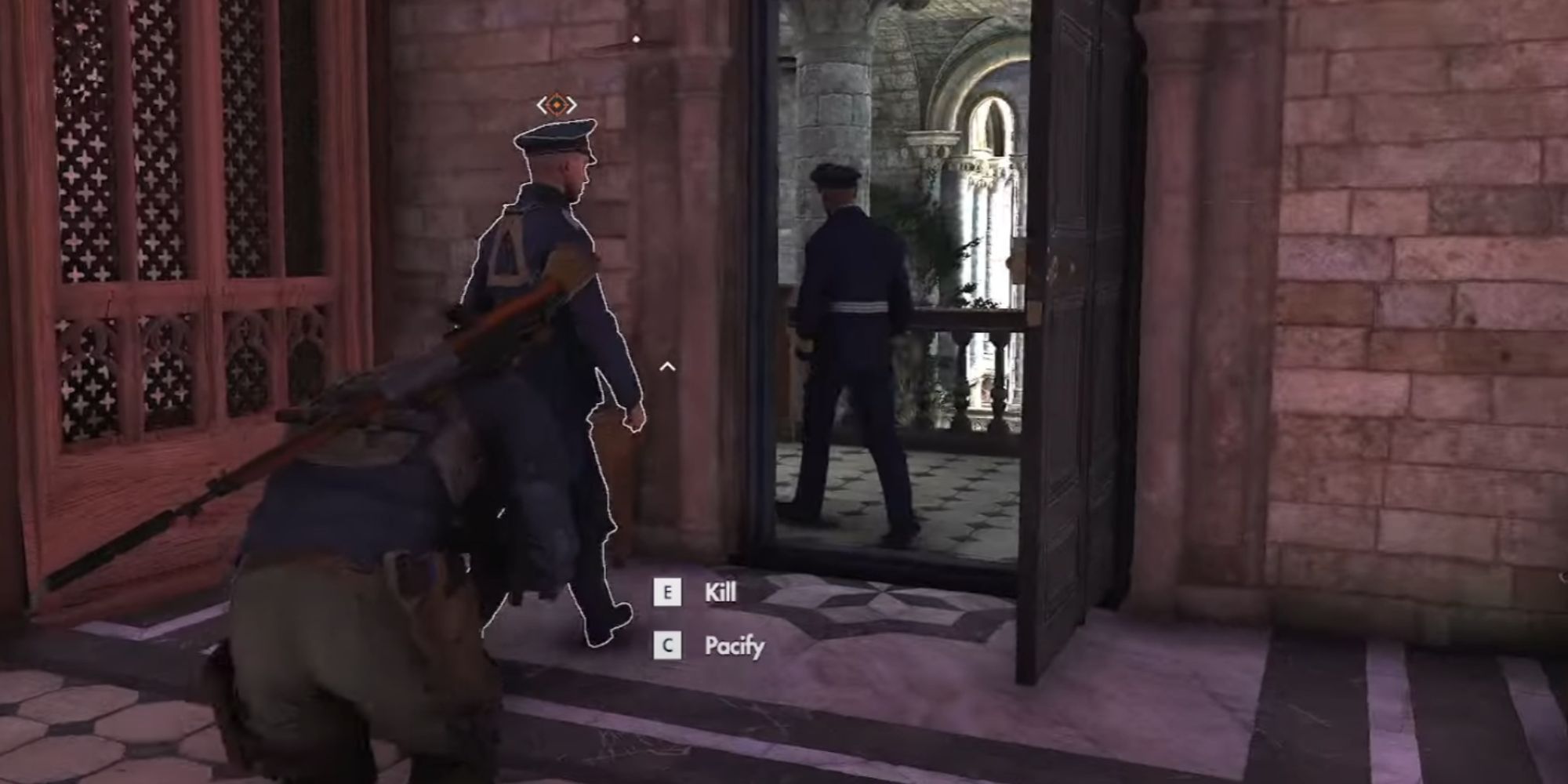 Fabian Richter is inside the meeting room next to the officers, so this Kill List objective is very easy to complete. You can kill him before the meeting is over if you wish.

However, you can also wait for him to leave the meeting, upon its conclusion, then follow him from the meeting room's northern door and use a melee attack to kill him after he separates from his fellow officers. There's a soldier patrolling nearby outside the northern door, so defeat him prior to the meeting's end.

Whistling to separate Fabian from the other enemies is also a viable plan. If you kill Richter with a melee attack without any witnesses, then you'll also complete the extra objective. 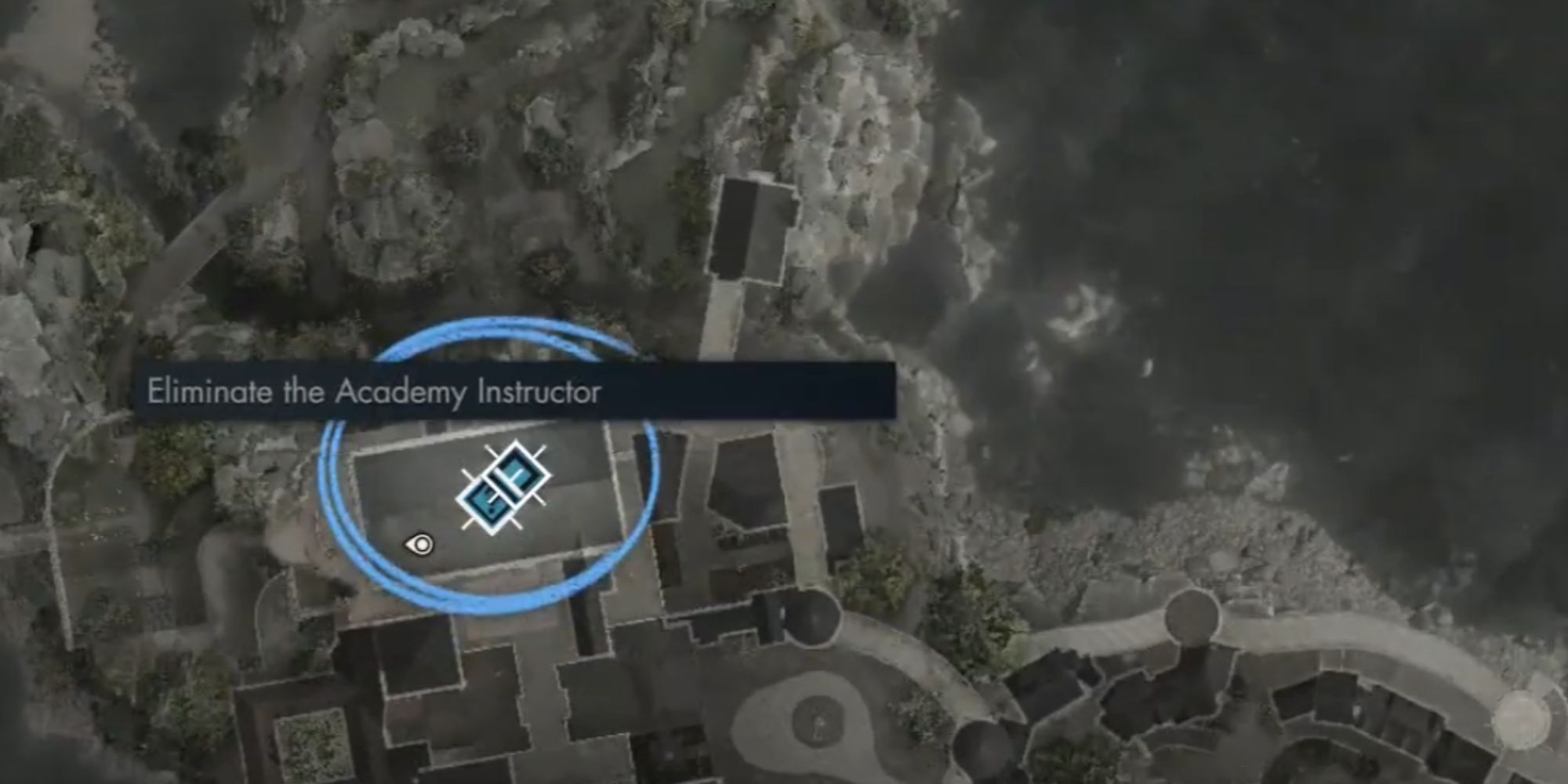 You should tackle this objective last because it's near the exfiltration point. Travel north until you come across the building on the map above, then you'll find a building with four enemies. One of them is a teacher training new spies, while the others are his students. You can enter through a doorway on the southern side of the building, as it's already open. 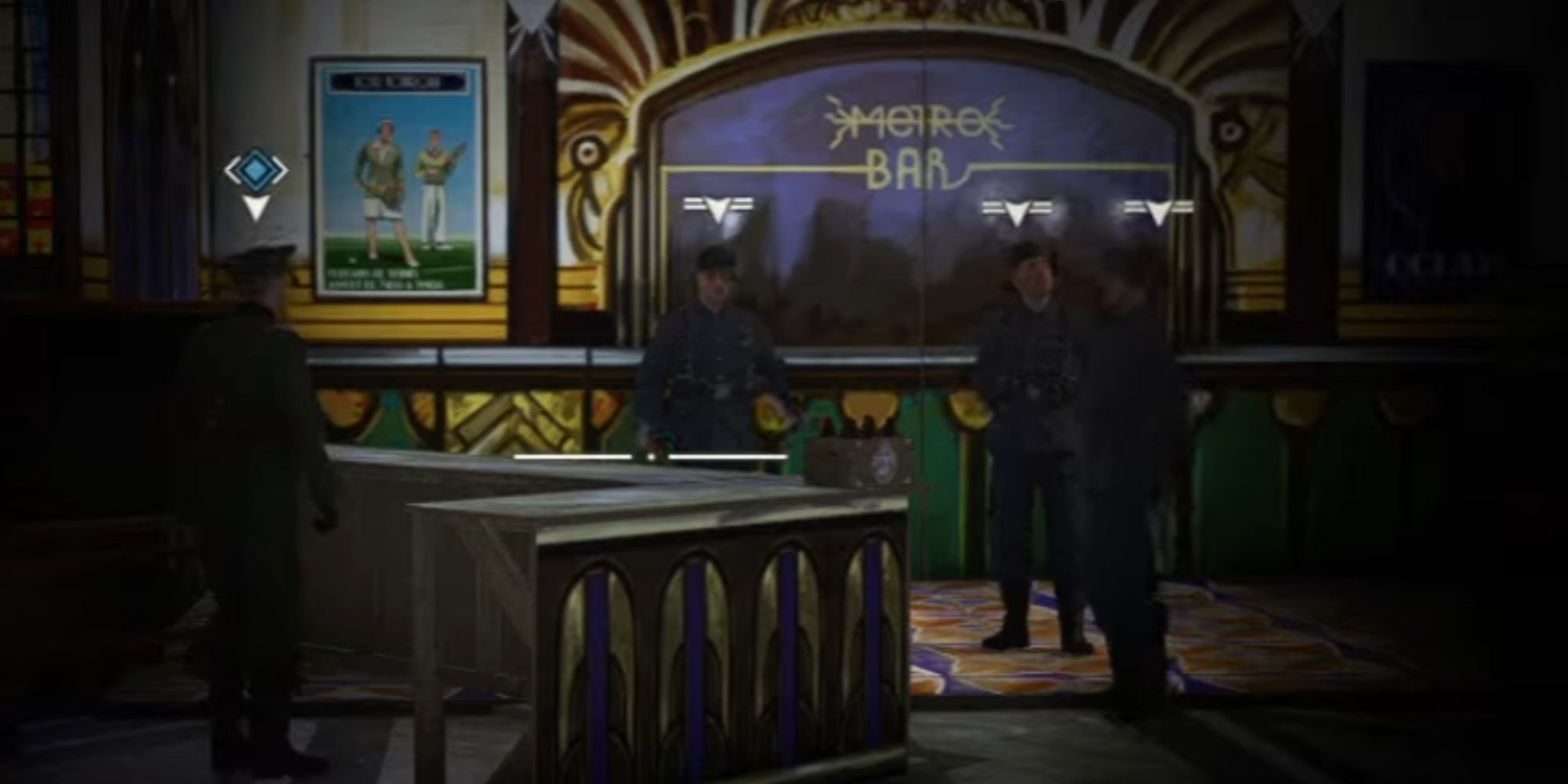 The four of them are close enough to each other that you can use a grenade to kill all of them at once. However, if you want to take a stealth-based approach, then wait until the conversation between them is over, and the instructor with the quest marker walks to the left. 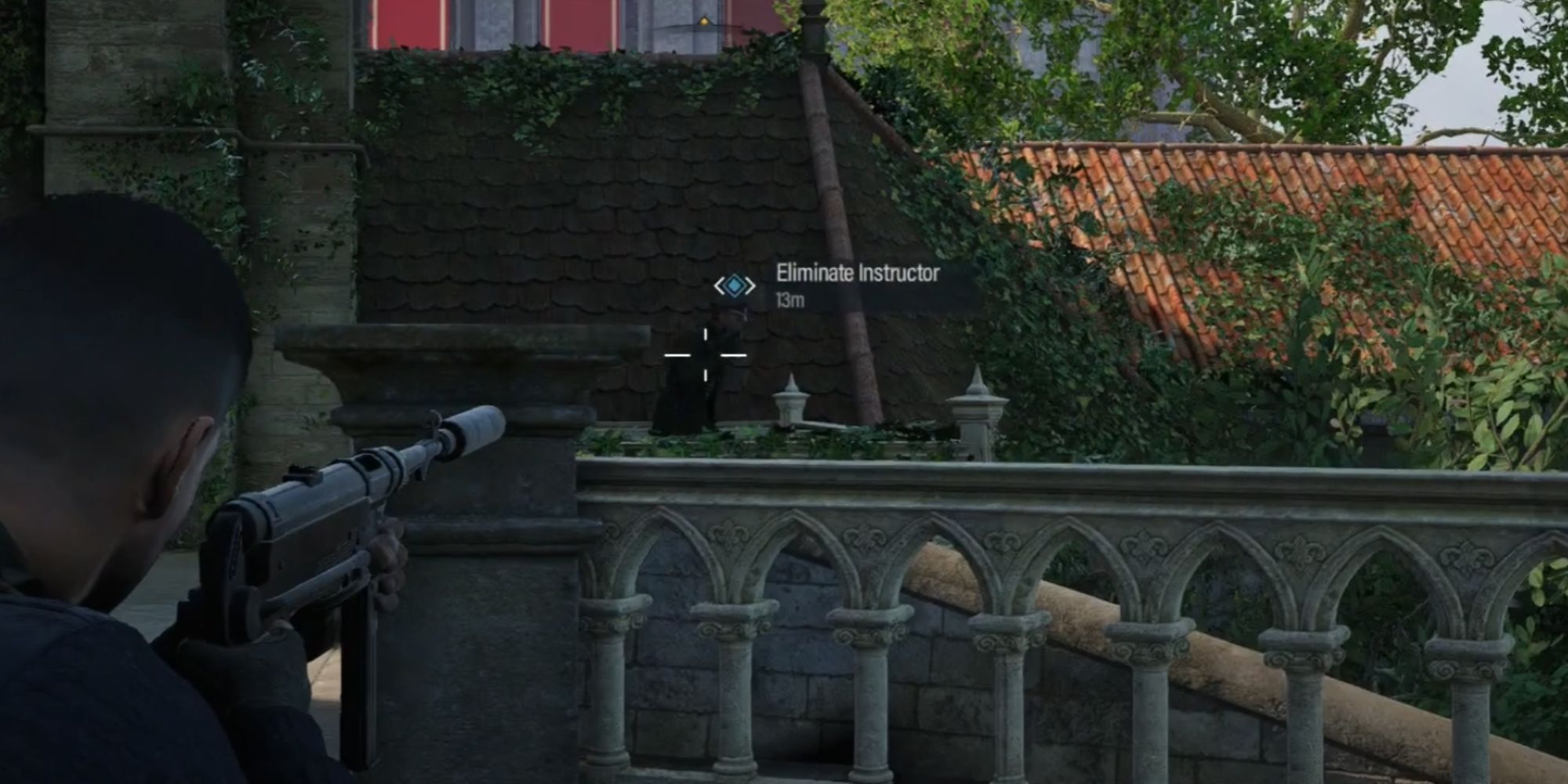 The other spies won't follow the instructor, so you can sneak up to him and kill him using a melee attack. You only need to kill the instructor to complete this objective, so it's up to you how you want to handle it. 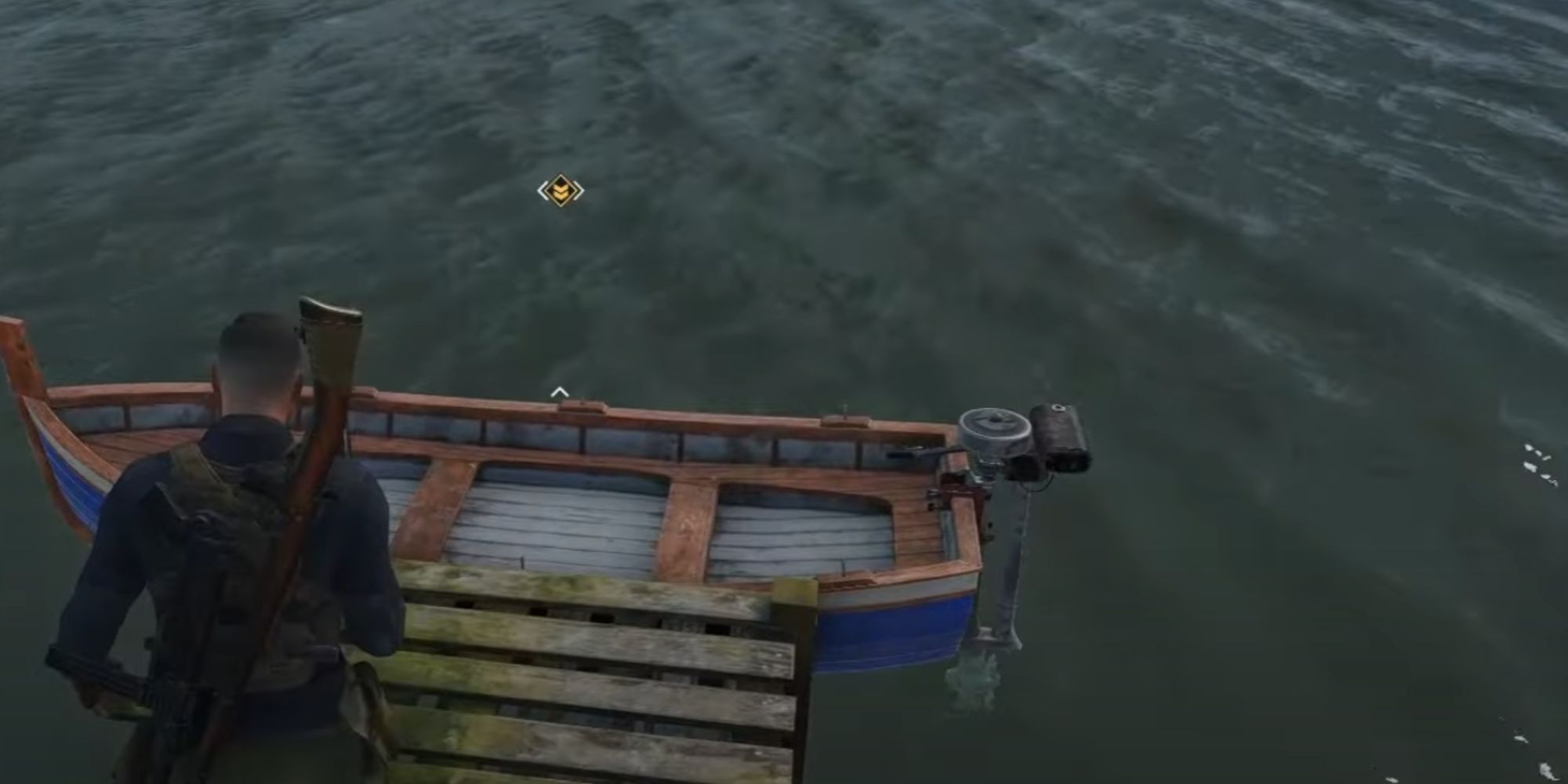 You can now finish the Spy Academy mission by traveling to the exfiltration quest marker on your map, which is on the northern part of the island. From the church's front entrance that you used earlier, you need to take a right to find a road that will lead you directly toward the exfiltration point. If you just killed the spy instructor, then travel north of your current location. Keep following this path north, and eventually, you'll see the exfiltration point. ​​​​​​

You can run past any soldiers you encounter as well, but this method only works on lower difficulties, as attracting the attention of too many soldiers on harder difficulties will usually result in a quick death.