Skyrim: How To Join Each Main Faction

Skyrim is a game loaded with content, which is one of the reasons the game has endured as long a life span as it has. On top of all the different things to do, you can join several different factions within the expansive Elder Scrolls title.

Joining a faction not only gives you a new questline to undertake, but also comes with a variety of bonuses that usually include having a free place to stay, store your different items, and earning some gold, as well as obtaining some powerful weapons and armor. These are the main factions in the game you can join. 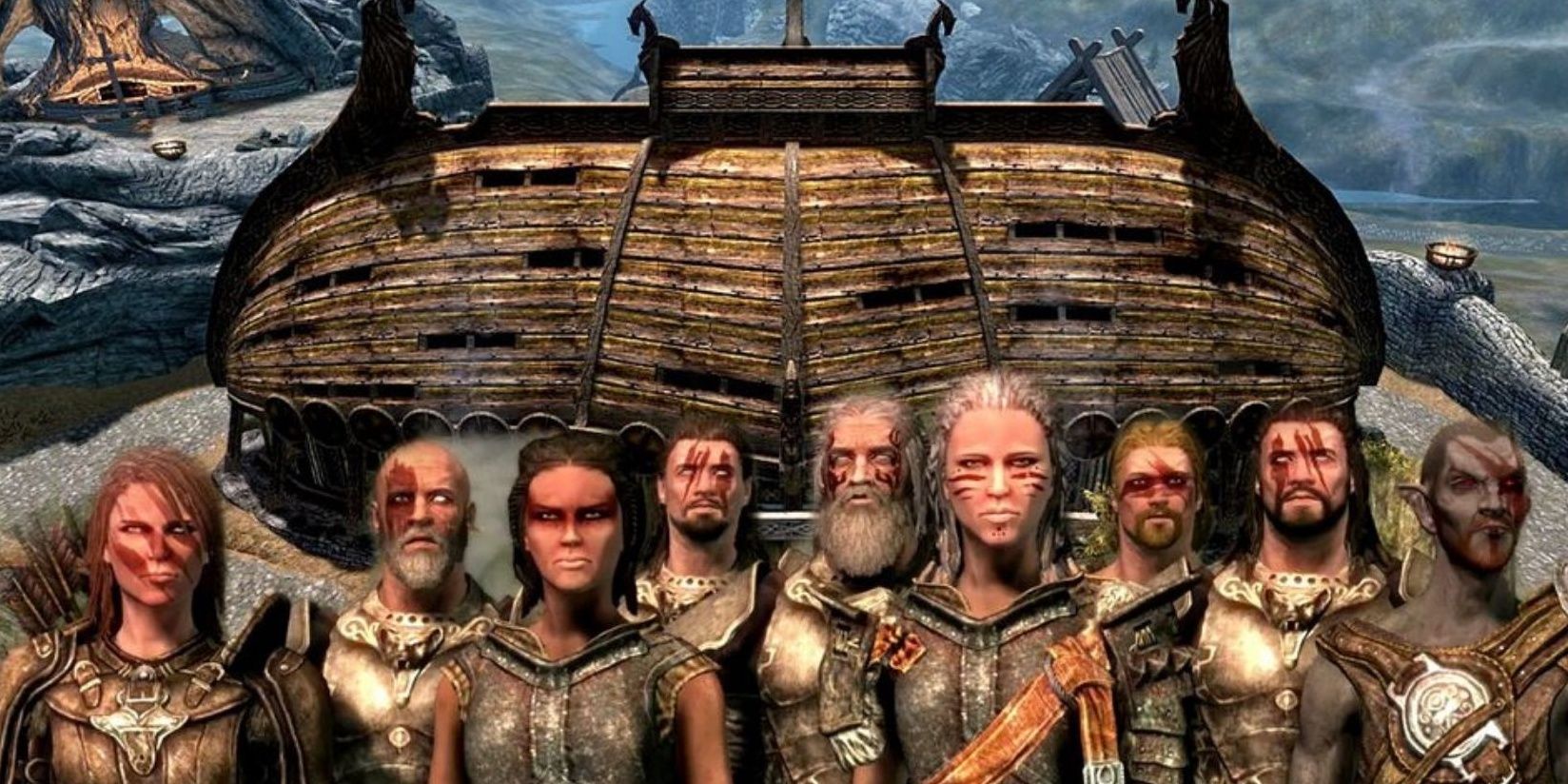 The first faction you're likely to find yourself joining is The Companions, an ancient order of warriors who have been around since the Nord Yssgramor led the first humans into Tamriel.

On the way to Whiterun, the first city you're likely to visit in Skyrim, you will find a group of three warriors fighting a giant. You can join in on the fray but watch hitting the others as accidentally hitting them will turn them hostile towards you.

Afterward, one of the warriors, Aela the Huntress, will talk to you and tell you briefly about the Companions. She'll tell you that if you want to join, you must talk to Kodlak Whitemane in Jorrvaskr, a building in Whiterun.

Jorrvaskr is located right before the steps leading to Dragonsreach. Once inside, you must turn right to find a set of stairs leading to the basement, where Kodlak can be found talking to Vilkas, another Companion. After introducing yourself, Kodlak will ask you some questions and tell you to head out into the courtyard so Vilkas can test you in battle.

After hitting Vilkas a few times and then doing some errands, another Companion named Farkas will show you to the dorms, thus making you officially a member of this faction. 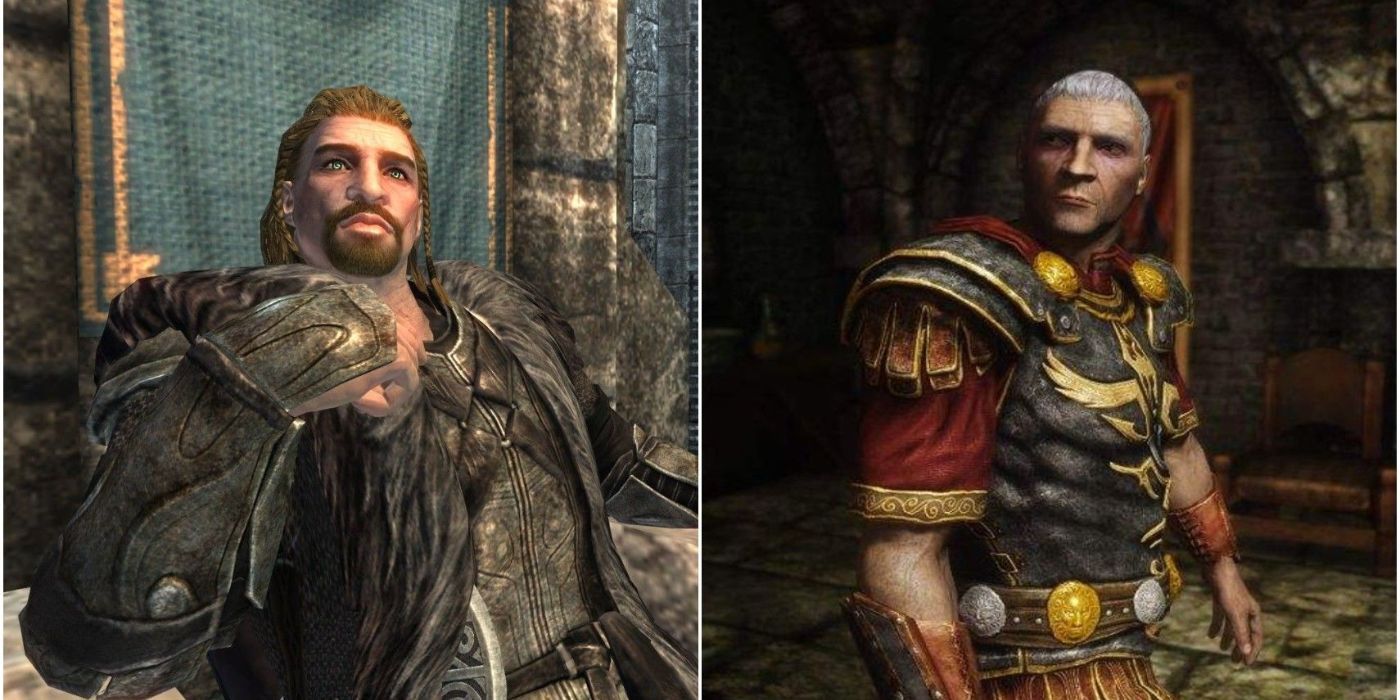 From the onset of the game, you are shown the Skyrim Civil War that is being waged between the Imperial Legion and Stormcloak rebellion. You will initially be able to join either faction based on who you escaped Helgen with, escape with Hadvar to join the Empire, or escape with Ralof to join the Stormcloaks. That being said, before you begin the faction quests you can also join the opposite side to your initial decision, by speaking with either Stormcloak or Legion soldiers while they're on patrol or in their respective camps.

Once you decide which side you want to join, you must go to different places in Skyrim to begin the respective questlines. Note that joining one side will negate the ability to join the other since there is no option for peace in this conflict.

The College Of Winterhold 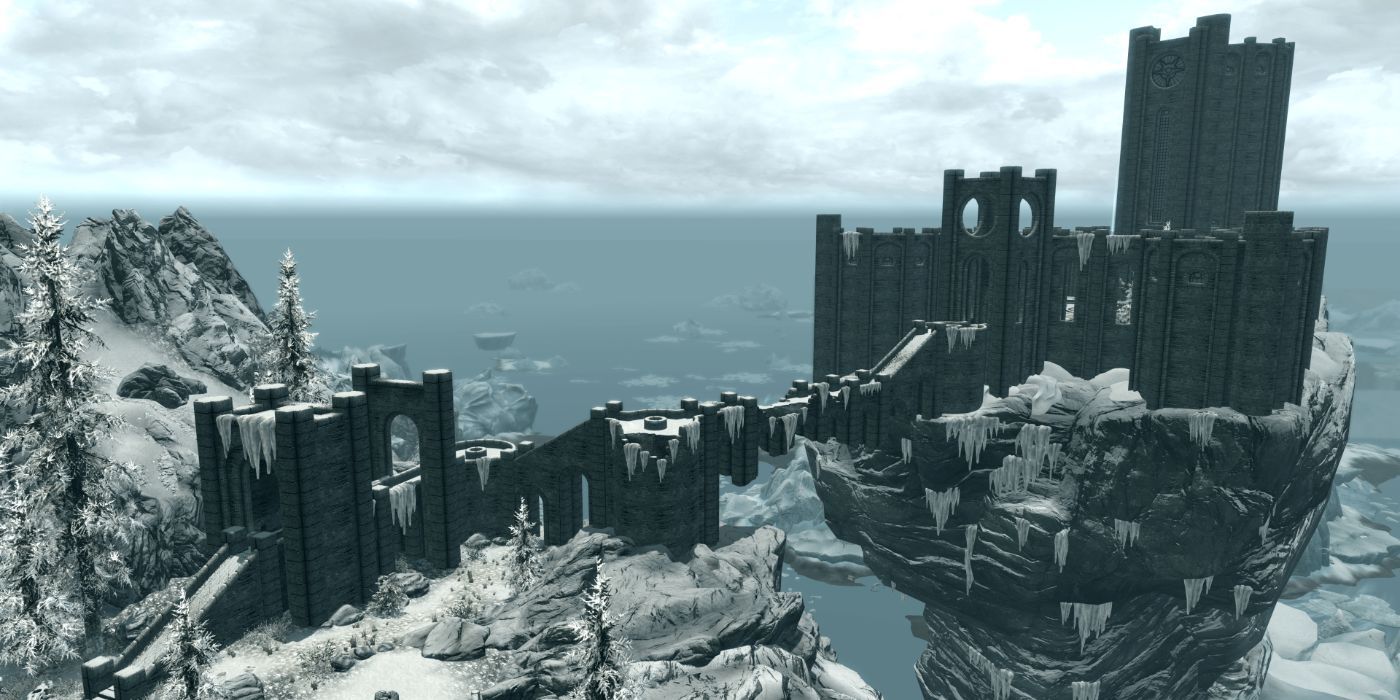 For those looking to focus on mage builds, joining this main faction will be a must. The College of Winterhold serves as a haven for those in Skyrim with an interest in the different arts of magic, and since you have to visit the College during the main quest, it'll be best to join it as soon as the game takes you there.

The college, as its name suggests, is located in Winterhold. Head to the gate where you will be stopped by the gatekeeper, Faralda. Tell her you want to join the college and she'll ask you to cast a random spell that may vary from between the following options:

Once you cast it, Faralda will then escort you to the main courtyard and tell you to get a tour from Mirabelle Ervine, who you will find arguing with a Thalmor agent. Partake in the tour with Mirabelle until you are shown your room in the Hall of Attainment, thus becoming an official member of the College of Winterhold. 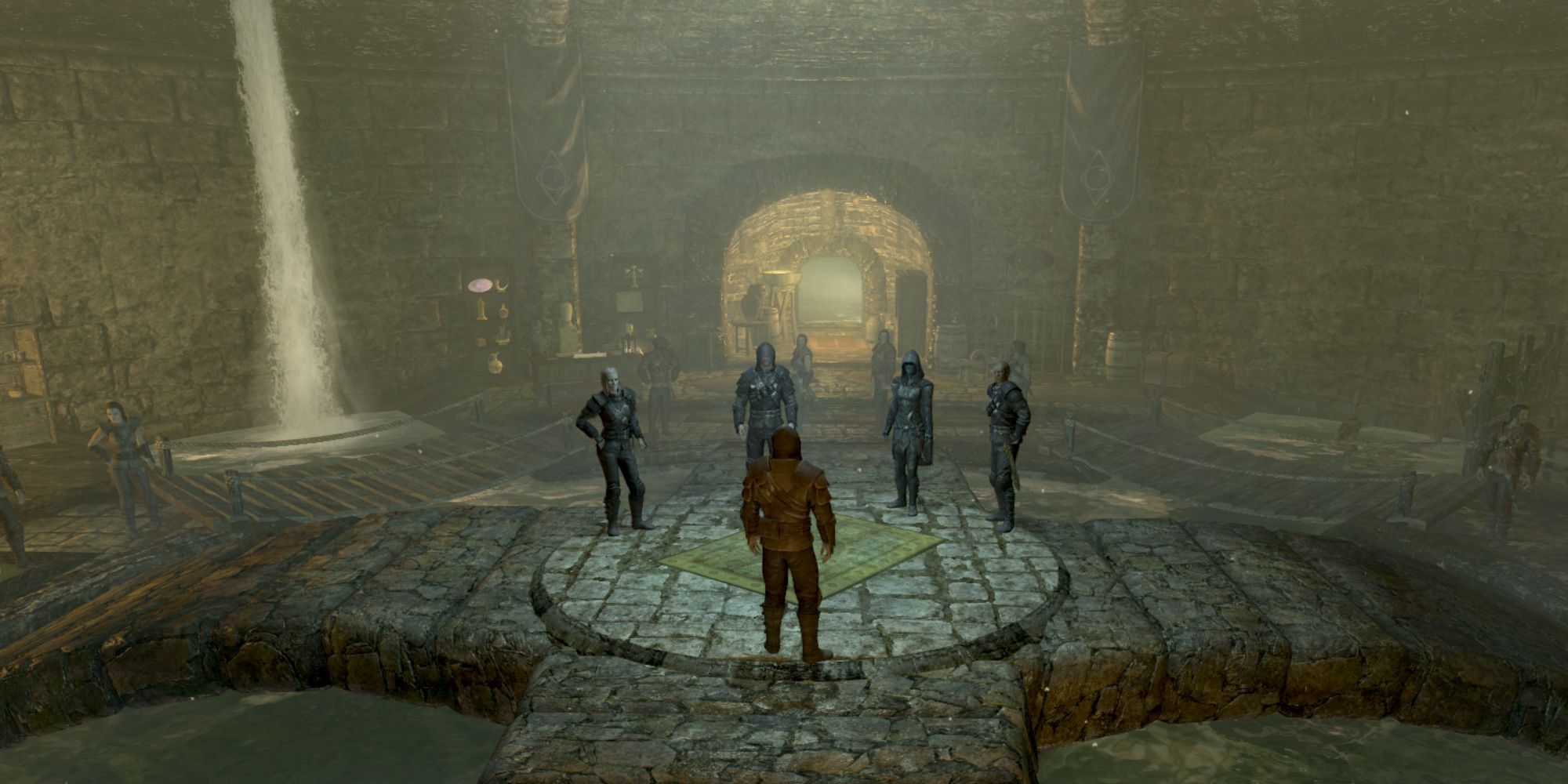 One of the few returning factions from Oblivion is the Thieves Guild who are based out of Riften. The Thieves Guild takes pride in stealing and selling various items through fences.

Once you enter the Riften marketplace you will be approached by Brynjolf, who will note how you have earned your gold. He will then have a task for you, which involves stealing a ring off of an Argonian merchant named Madesi and then planting it on Brand-Shei to frame him for the theft. Brynjolf will get everyone's attention, giving you the chance to steal it from underneath Madesi's stand and plant it on Brand-Shei through Pickpocketing.

After you're done, Brynjolf will be impressed and tell you to meet him at the Ragged Flagon in Riften's Ratway. There are some enemies inside of the Ratway, but they won't cause too much trouble. Once you arrive at the Flagon speak to Brynjolf again, and he will take you to meet Mercer Frey, the leader of the Thieves Guild, to be inducted into it. 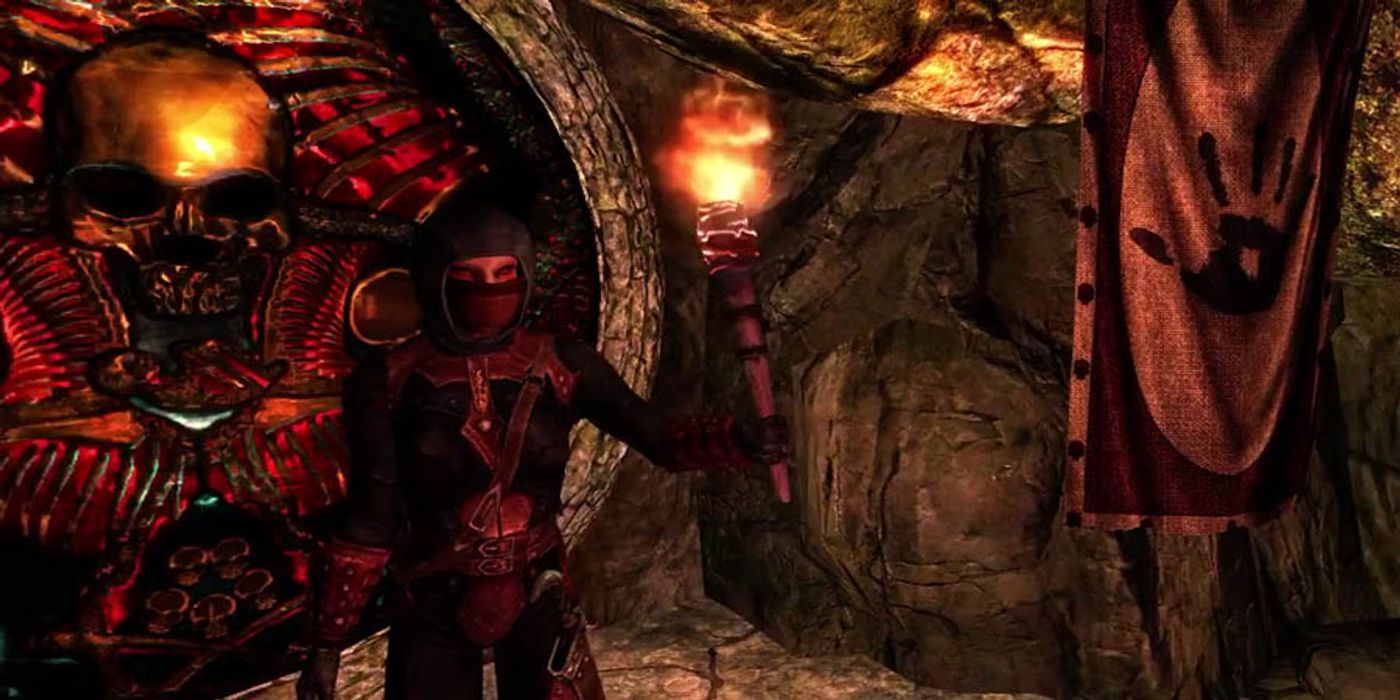 A group of assassins that are as equally respected as they are feared, the Dark Brotherhood is known for pulling off assassination contracts and sneaking away without anyone knowing what happened.

Before you can join the group, you must visit the Aretino Residence in Windhelm. Head inside to find an orphaned boy named Aventus Aretino, performing the Black Sacrament to summon the Dark Brotherhood. He will mistake you for a member of the Dark Brotherhood and ask you to kill Grelod the Kind, a very cruel woman in charge of Honorhall Orphanage in Riften, where she torments the kids. Travel to the orphanage and just murder Grelod, since sneaking or any kind of strategy won't be necessary and you won't be reported to the authorities. Head back to Aventus for your reward. Alternatively, you can also kill Grelod before speaking to Aventus, to finish the quest a bit quicker.

Either way, wait a few in-game days and then head to a settlement to receive a message from the courier. Open the mysterious note to find a handprint with the words "We Know" written on it. Now sleep in any bed and you will wake up in a mysterious cabin with the Dark Brotherhood's leader, Astrid, waking you up.

She'll be impressed with what you did but at the end of the day, you took a Dark Brotherhood contract away from them. Astrid will instruct you to kill one of three anonymous targets to make up for that contract, after which she will propose you join her little family. She'll give you the location of the Dark Brotherhood Sanctuary, located just outside of the city of Falkreath.

You will find a door that certainly won't give you spooky vibes and it will ask for a password, which is "Silence, my brother". You will find Astrid inside, welcoming you to the Dark Brotherhood. 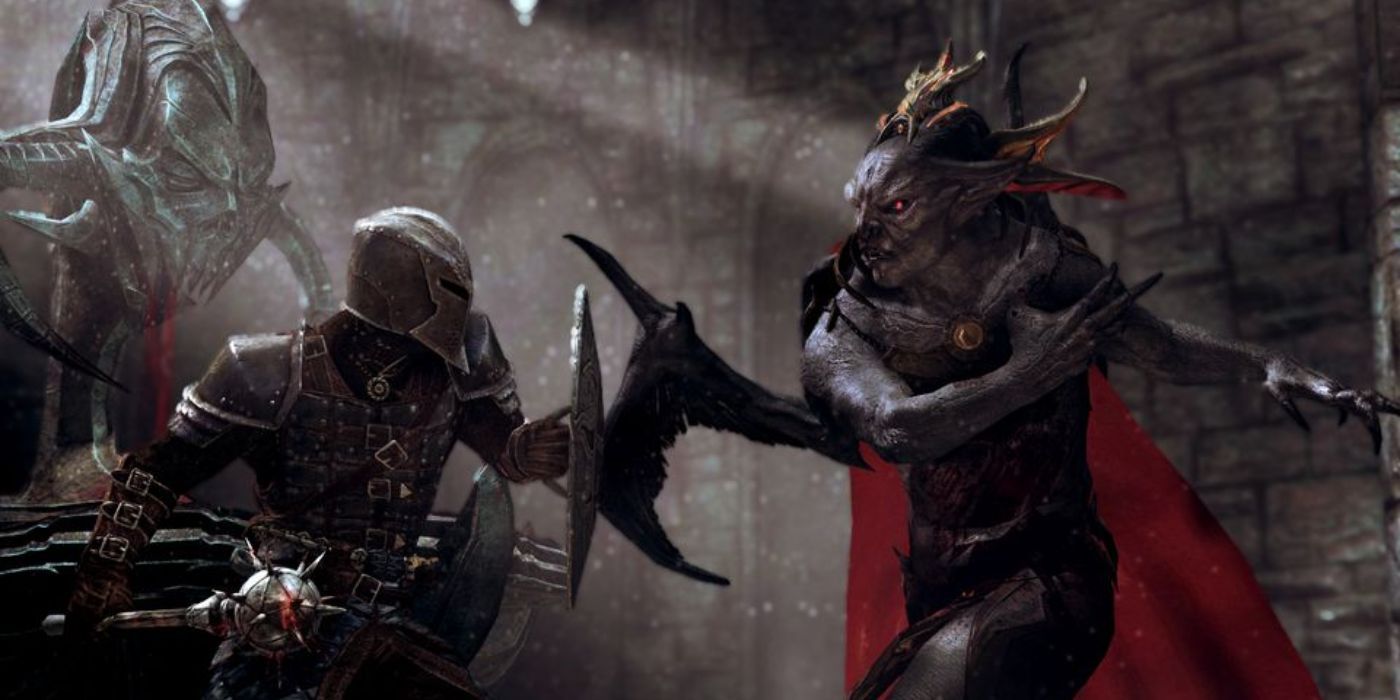 Exclusive to the Dawnguard DLC is the vampire hunter group of the same name who are trying to eradicate any vampires in Skyrim. At the same time, the Volkihar Vampires are trying to find a way to eliminate the "tyranny of the sun" so they can roam as they see fit. Joining either faction begins the same way.

First, you will hear rumors that the Dawnguard are recruiting members, and doing so will mark Fort Dawnguard on the map, at the east of Riften. Make your way into the keep to see an argument between Isran, the leader of the Dawnguard, and vigilant Tolan. To show your worth to them, he will send you to Dimhollow Crypt to find out what the vampires want to find there. Keep going through the cavern until you see a crypt with a vampire woman named Serana, hidden inside a coffin with an Elder Scroll in hand.

Now you have to head to Castle Volkihar with Serana where you will meet her father, Lord Harkon. As a reward for saving both his daughter and the Elder Scroll, he will reward you with the chance to become a vampire lord like him. This choice will affect which faction in the Dawnguard questline you can join.