Sea Of Thieves: How Captaincy Works

Season 7 of Sea Of Thieves is finally here and with it comes the ability to buy your own ship and become a captain. But having a personal boat isn't just something you can do to feel like a rich, fancy pirate person. Captaincy also grants you some new perks that will make plundering easier and more convenient.

So how exactly does Captaincy work in Sea Of Thieves? Well, let's take a look at how you become a captain and what perks you'll get when you spend gold on a brand new ship.

How To Buy A Ship 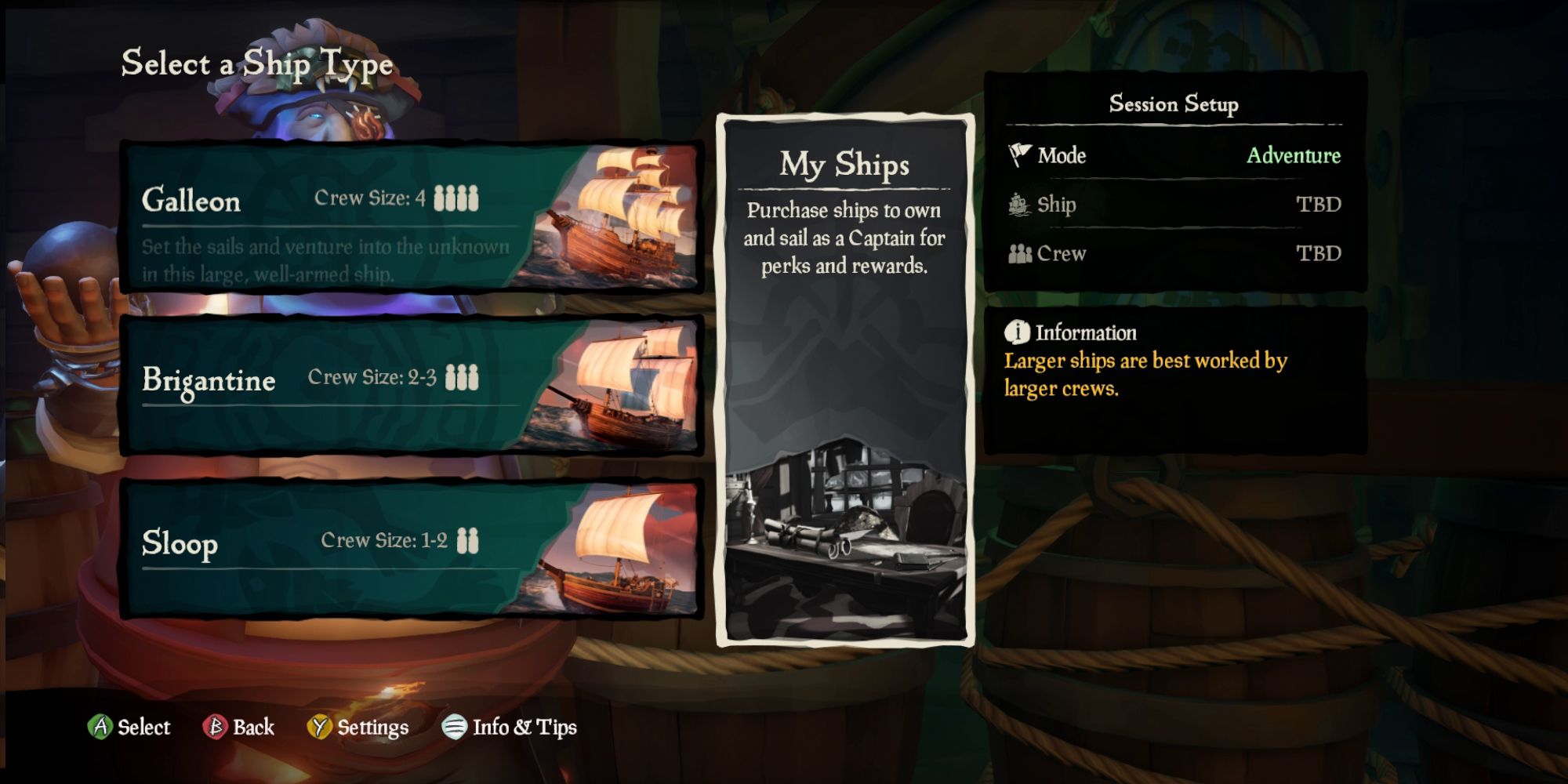 To become a captain you first need to own a ship. To buy your own pirate vessel, you need to navigate to the menu where you choose the type of ship you want to set sail with. A new menu where you can buy ships and access ships that you own will be squeezed next to those choices. Select that, then there will be a screen that says "Purchase Ship." Click on that, and you'll be given the option to buy a Sloop, a Brigantine, or a Galleon.

Buying a ship will cost you some of your gold. Each type of vessel is priced differently. A Sloop costs 250,000 gold, a Brigantine costs 375,000 gold, and a Galleon will set you back 500,000 gold. You can own one of each of the different ship types. 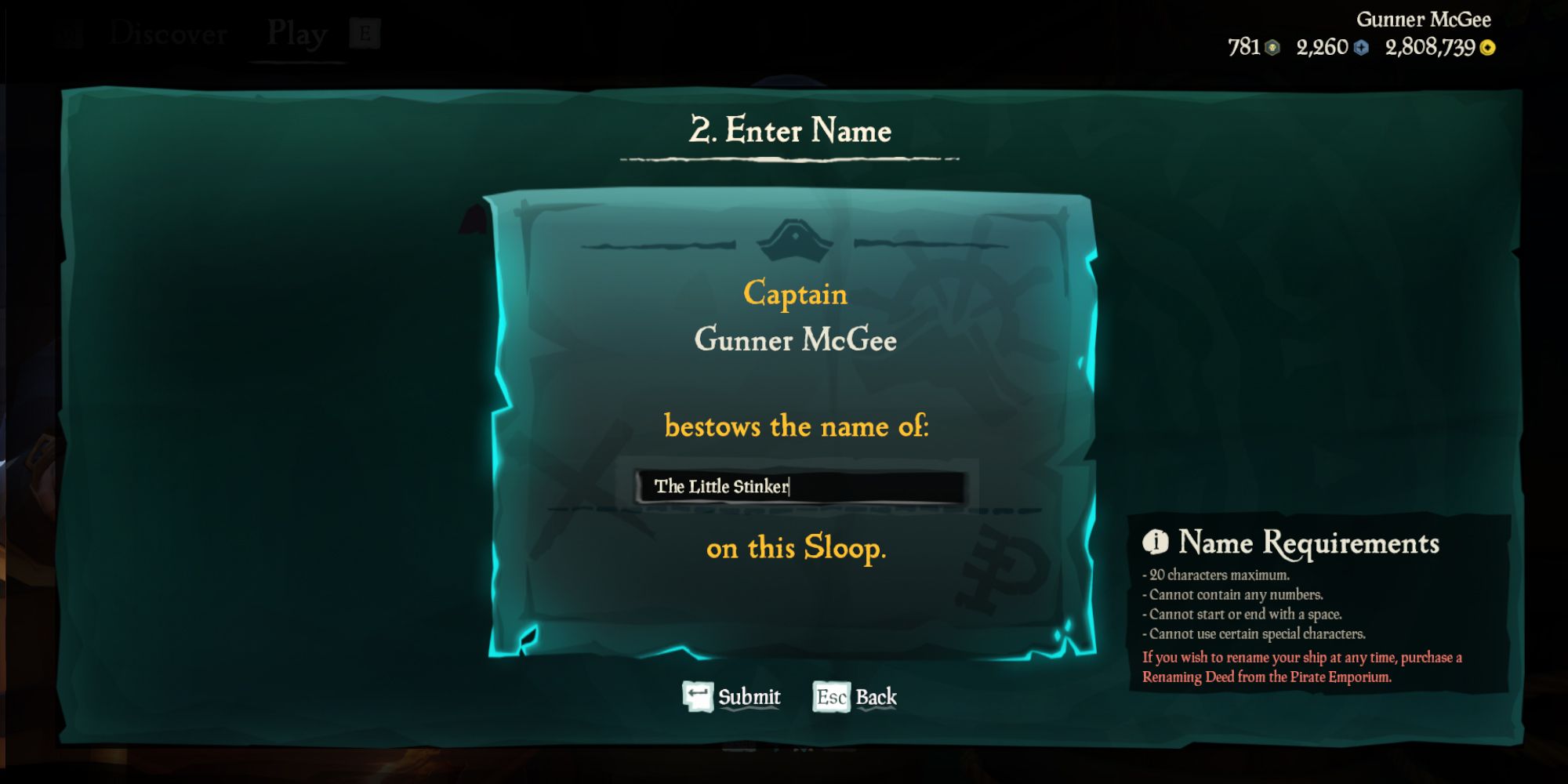 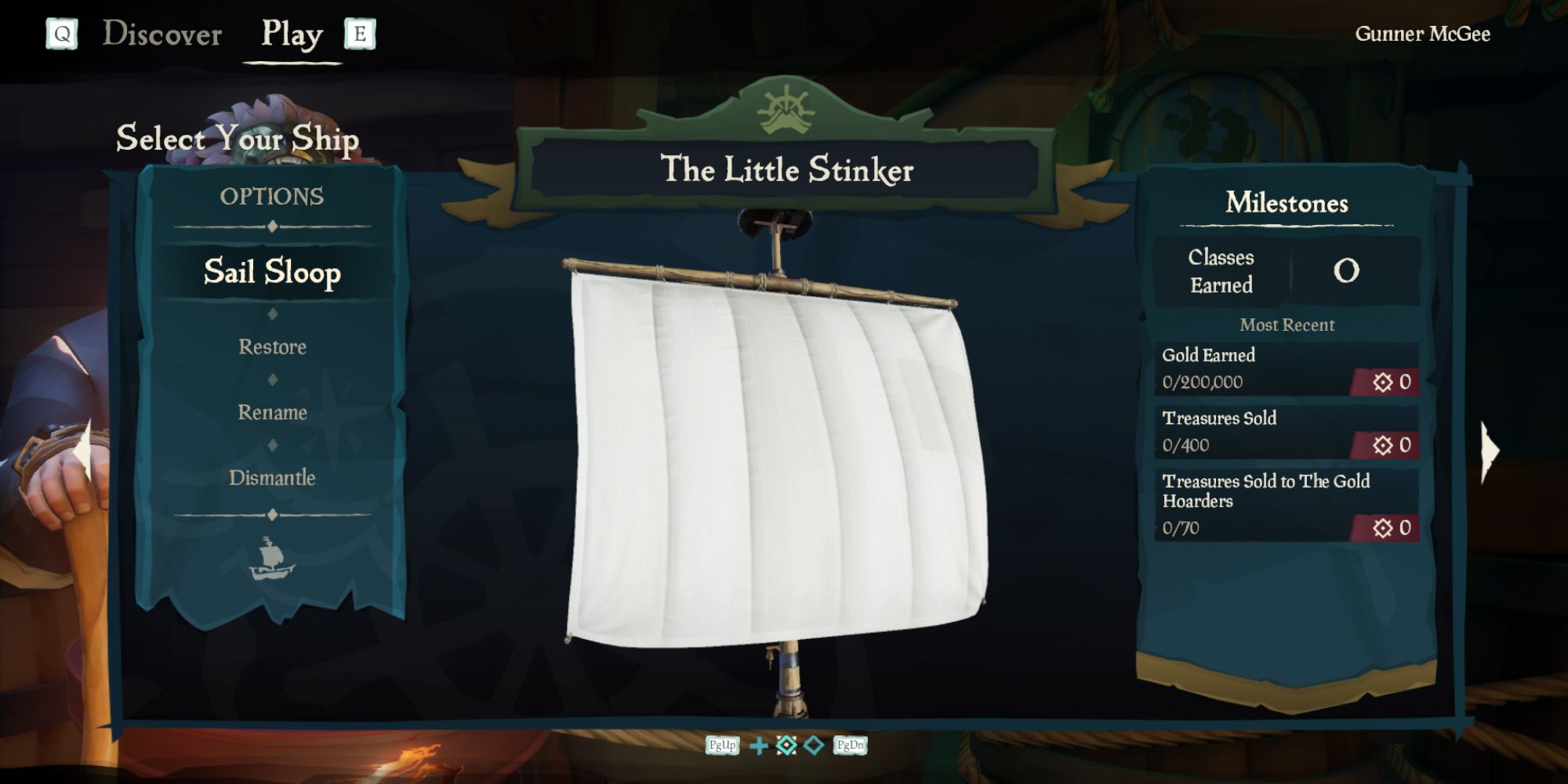 After you've bought your boat, you'll be given the chance to name it. As you might have suspected given that Sea Of Thieves is seen as a family game despite its teen rating, you can't put any swears or otherwise offensive terms in your ship's name. The worst word you'll be allowed to use will probably be something like "booty." Your ship's name also can't use any numbers, periods, or certain special characters, and it can't exceed 20 characters.

When you've finished typing in your ship's name, you'll be taken to one last screen where you'll confirm the purchase of your ship. Accept that, and as long as your ship's name is deemed suitable, you'll now officially be a captain.

Once you've bought a ship, you'll be brought to a new sub-menu that will give you information and stats about your new vessel. From here, you can restore the state of your ship back to pristine condition if it's taken damage during a prior voyage, rename the ship if you have a Renaming Deed, or dismantle the ship if you longer want it.

Keep in mind that dismantling a ship will cause you to lose all captain's voyages and milestone progress tied to it.

Aside from being able to name your ship, being a captain in Sea Of Thieves comes with some pretty nice perks that make pirating a whole lot easier. During your first voyage with your newly purchased boat, The Pirate Lord will arrive and go through the advantages you'll now have as a Captain. However, he drones on for quite a while, so let's just sum up what you can now do. 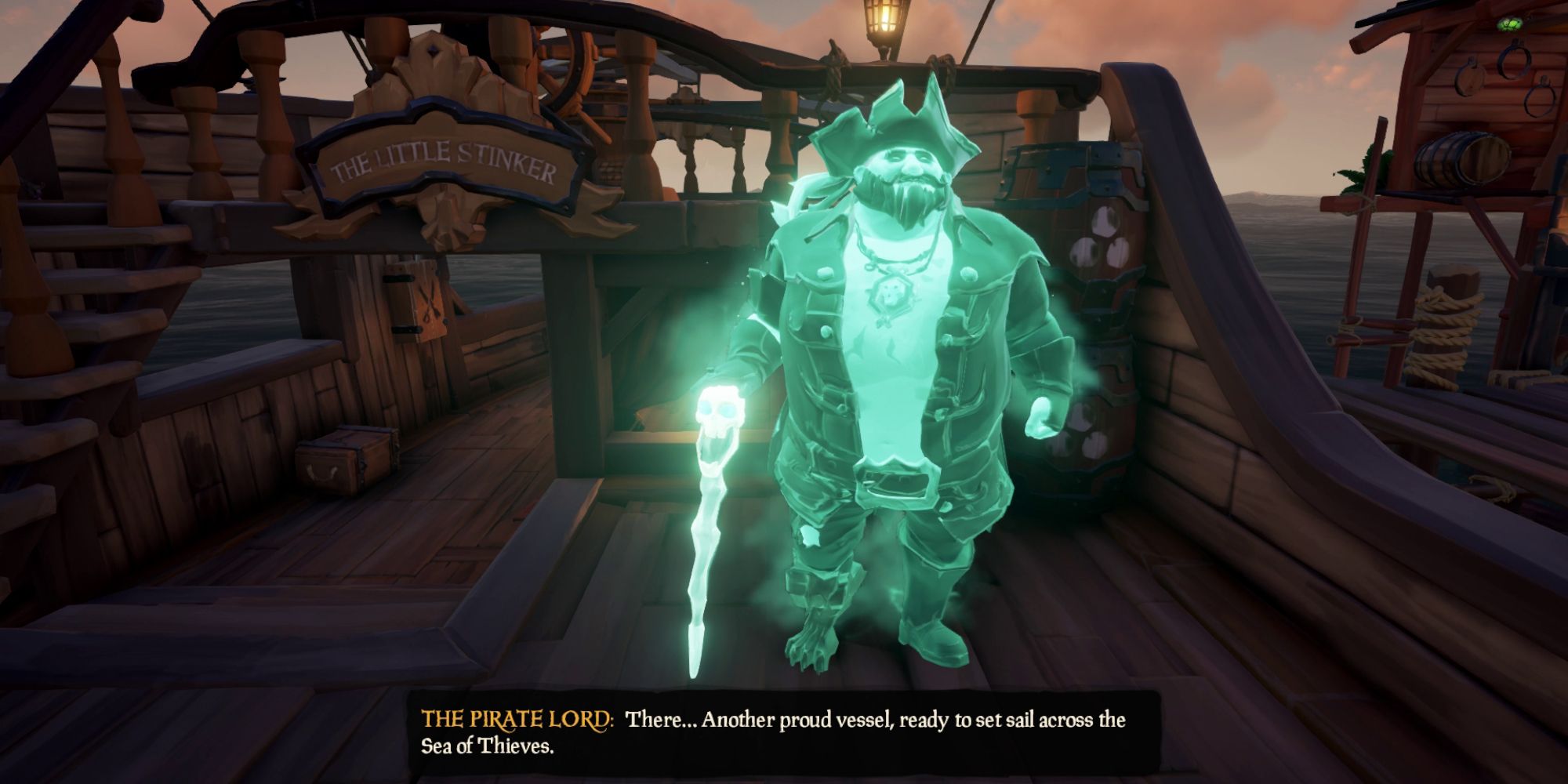 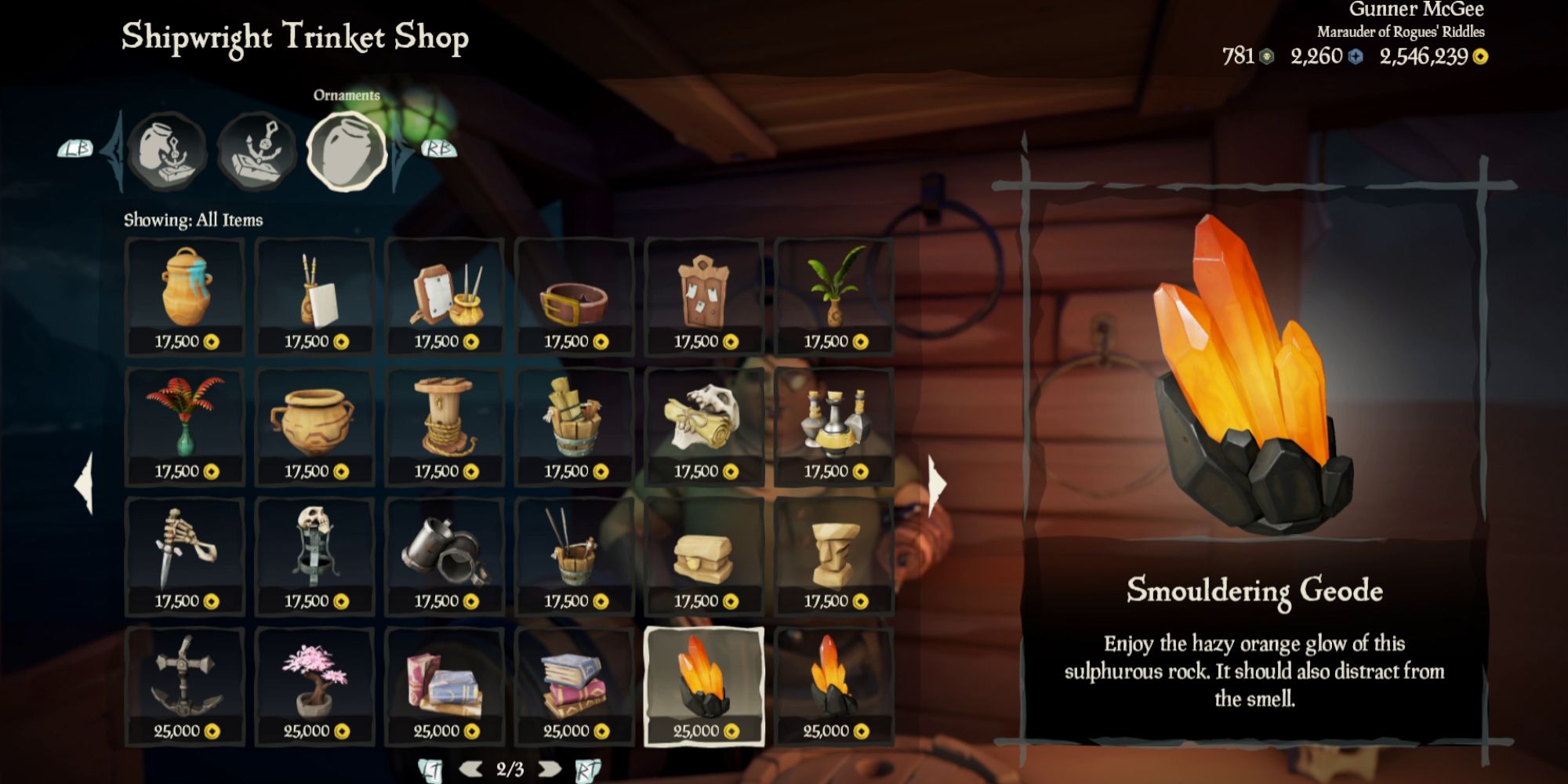 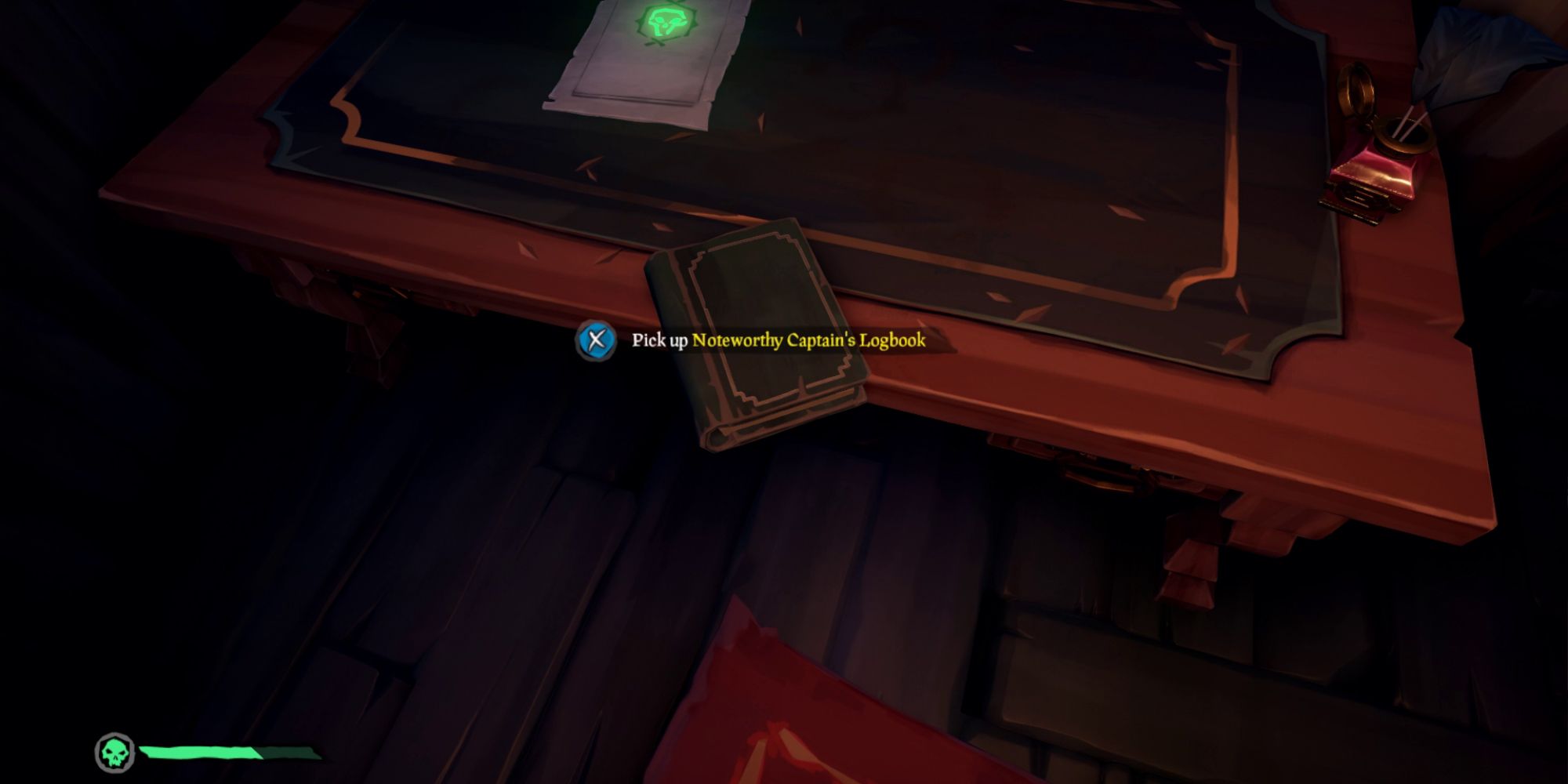 First of all, owning a ship opens up new cosmetic options for both the inside and outside of your ship. Your boat will now proudly bear its new name on a ship crest. You can customize this by unlocking or purchasing various styles of crests. You can place trinkets and decorations around the ship to spruce it up. Some of these can be purchased right away, while others will have to be unlocked by reaching classes and achieving milestones with your ship. You'll even be able to change up the furniture in the ship such as the bed, curtains, or captain's chair.

Speaking of cosmetics, you can now save specific cosmetic loadouts to your ship for a small amount of gold. This will make it so you no longer have to go through the ship customization chest at an outpost to apply each cosmetic one at a time. Instead, you can have your ship looking exactly how you want it from the moment you load in.

You can now keep track of what you've accomplished on your ship via your ship's logbook. This will show you various stats such as how many voyages you've completed, how much gold you've earned, who has been in your crew, how long it's been since your ship last sunk, and other important information related to your pirate career. Like other aspects of your ship, the logbook can also be customized.

Be careful with this logbook as it can be valuable to other pirate crews. If your boat is sunk, then the enemy ship that took you out can steal your logbook and sell it to the Reaper's Bones for a hefty reward. The value of a logbook will depend on how long it's been since your vessel last sunk.

What The Shipwright Will Do For You 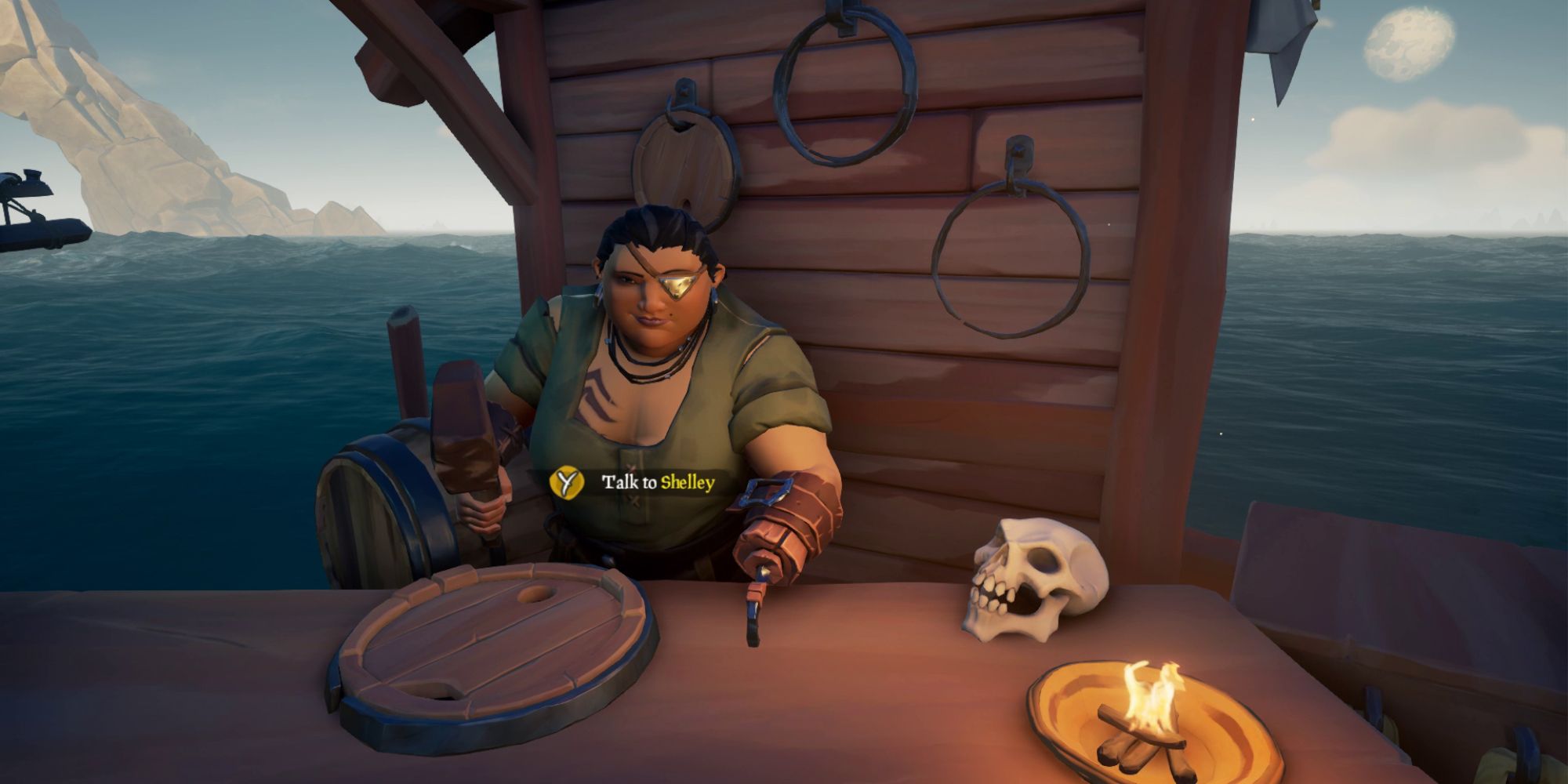 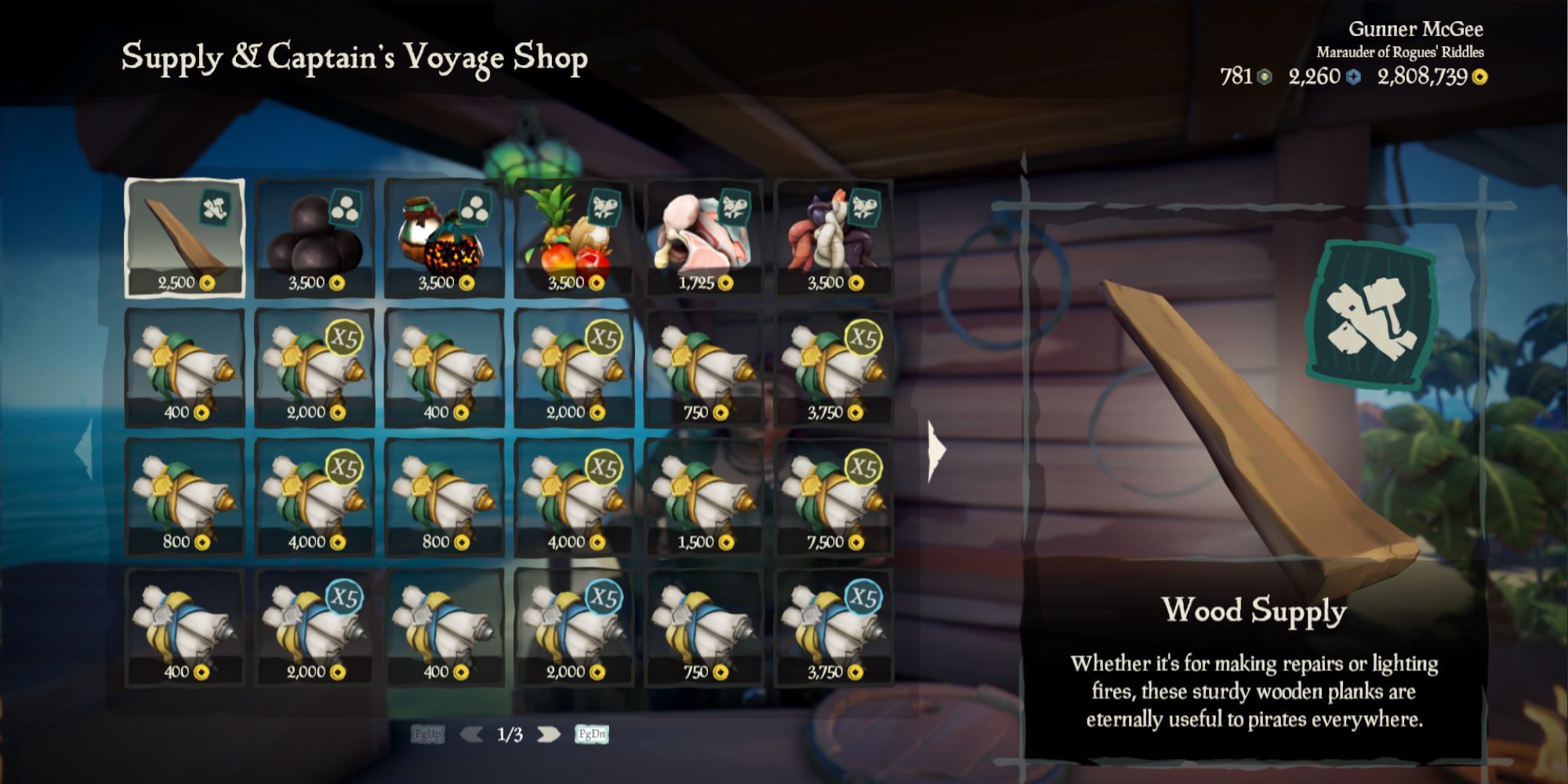 The Shipwrights used to just be the people you'd go to so you could get a new coat of paint for your ship and its parts. Now they'll have new functions made available specifically for captains.

In addition to selling you the new ship cosmetics mentioned in the previous section, you can now purchase supplies from Shipwrights. This means you can buy bundles of fruit, meat, cannonballs, special cannonballs, wood, and bait. Once bought, they'll be loaded into the supply barrels on your ship. It's a nice option to have since it means that you no longer have to buy a storage crate and run around the outpost stealing supplies out of every barrel you can find.

The Shipwright will also sell you voyages only meant for Captains. They'll have voyages from the Gold Hoarders, Order Of Souls, and Merchant's Alliance trading companies. You'll be able to buy different levels of voyages depending on your rank with each of these companies, and you can choose to buy a single voyage or a bundle of 5 voyages.

There will also be special voyages, such as mercenary voyages – which will be a mix of different voyages for each company – voyages for Ashen treasure, Athena's Fortune voyages, and voyages that are reserved for players who have achieved the Pirate Legend status. You'll find these voyages on the shelf in the captain's quarters of your ship, and you and your crew can then vote to pursue them by using the captain's table. 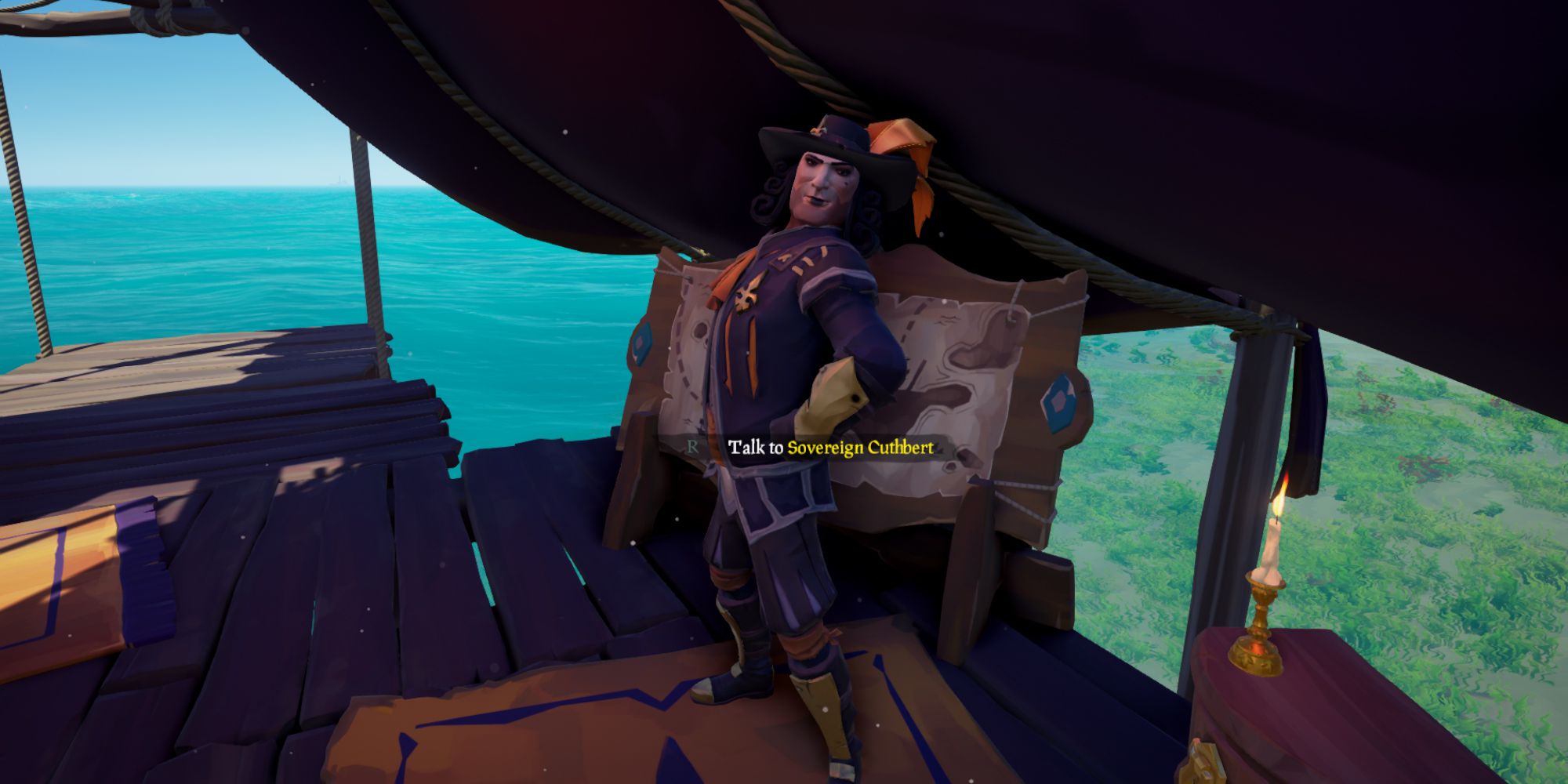 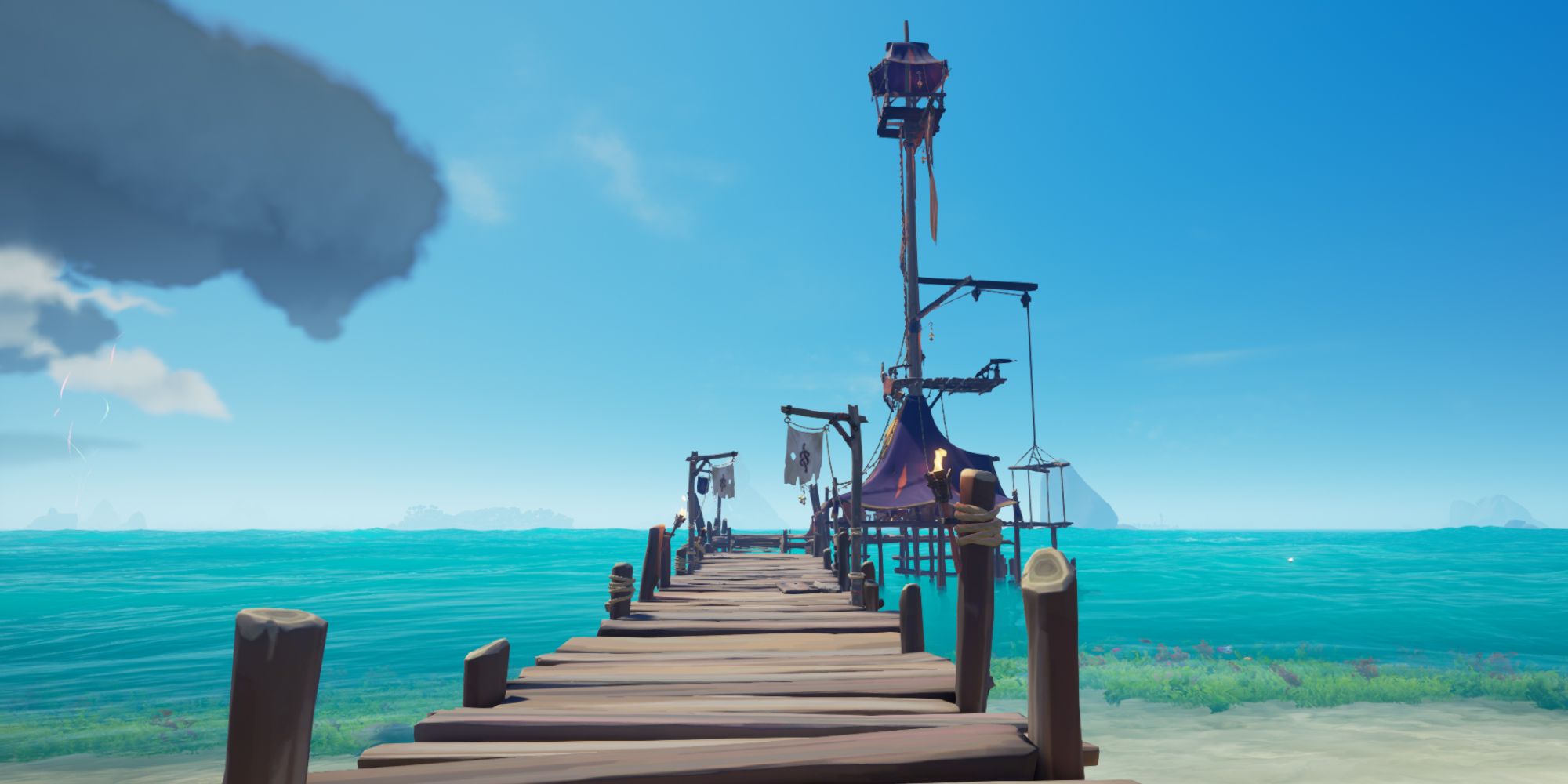 The last major perk of being a Captain involves a new group of NPCs known as The Sovereigns. These snooty aristocrats will be stationed at each of the seven main outposts across the sea. You'll be able to spot them by looking for their tent that has something that looks like a giant ship mast sticking out from a dock on the outpost.

So what do these Sovereigns do? Well they make offloading your treasure much easier. Before you would have to take each of the specific treasures to their respective trading companies (chests go to Gold Hoarders, skulls go to Order Of Souls, etc.) But with the Sovereigns, you can take any old piece of loot to them, and you'll receive whatever amount of gold and reputation that you would have received by selling it to a company. This significantly speeds up the process of turning in your ill-gotten goods at an outpost. There's even a harpoon on the Sovereign stations, which you can use to quickly pull your loot off the ship.

However, The Sovereigns will only take loot from captained ships. So if your boat doesn't have a captain, these guys will want nothing to do with you. They also don't deal with anything related to The Reaper's Bones, so you can't give them any stolen emissary flags or ship logbooks.