Cross over the bridge over the shallow river and head into the house ahead, through the open door. Once inside, turn around and use the prompt to barricade the door with the shelf with yellow tape stuck to its side. Examine the crackling radio and it will turn off, and then grab the Handgun Ammo from near the window close by.

Once you’ve done that, head upstairs and get the Handgun Ammo and Chem Fluid. Get ready for a fight. 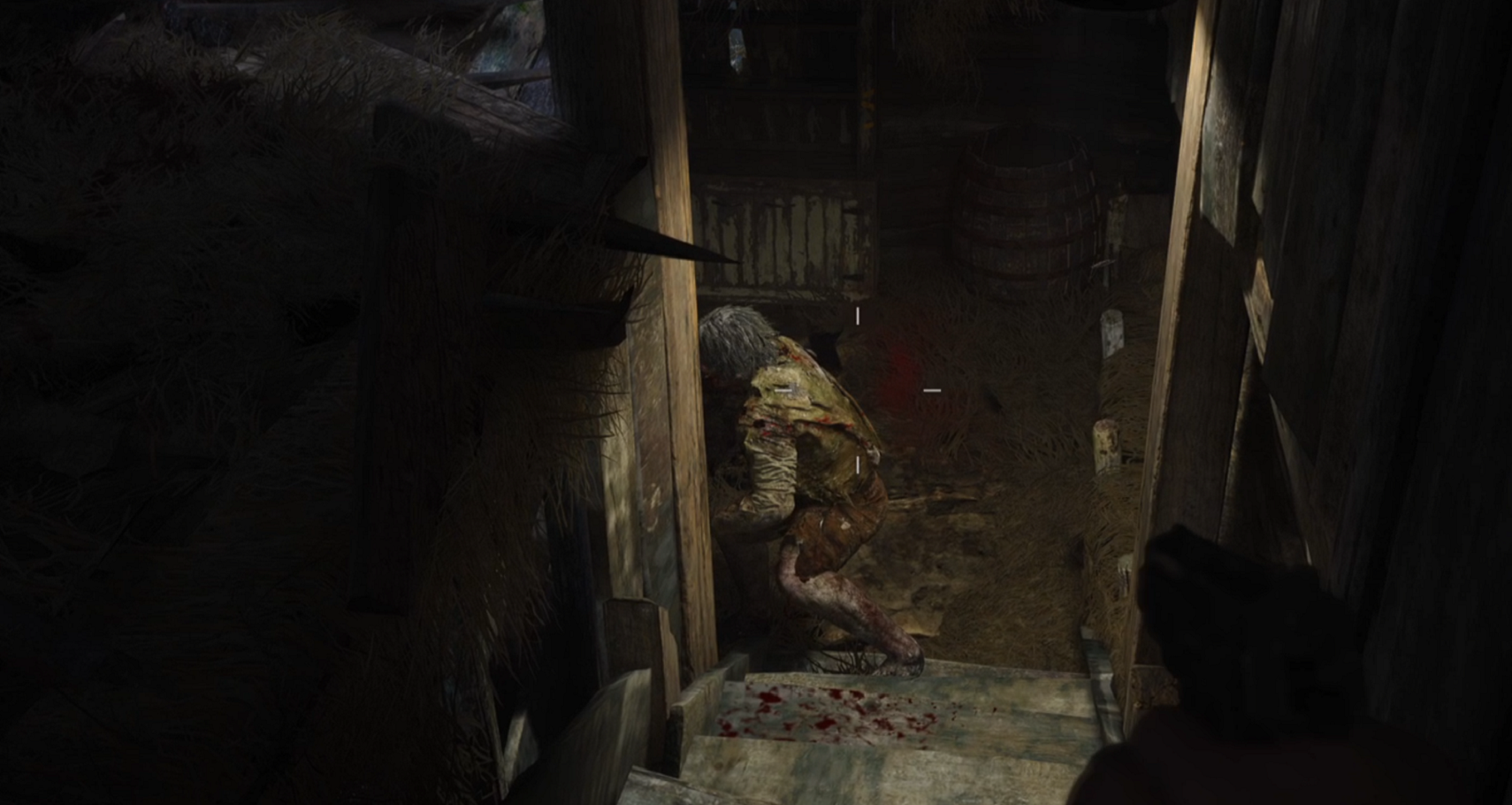 Make your way downstairs and keep an eye on the windows – if an enemy appears, shoot it in the head. Be careful, though – another werewolf will likely appear inside the building from the stairs. Again, it’s close quarters so make use of guard to stop it from grabbing you and don’t be afraid to run past it to make space before firing. You can bait the werewolf that’s inside to follow you to the stairs, giving you enough distance to get some clean shots in.

Eventually, the noise will die down, Ethan will say “is it over?” and the radio will crackle to life, signalling the end of your ordeal… for now. The radio message requests that survivors head to Louisa’s house near the fields. Move the shelf that you blocked the door with and head outside.

Once outside, take an immediate left and follow the trail around. Don’t worry about the werewolves on the roof, they won’t attack you for now. Slash the box open and grab the Herb. Now one of the werewolves might have dropped down and could be stalking you on ground level – he will attack if you get close. Fire at him and you’ll anger them all, but you don’t have much of a choice. You can’t hope to win a straight fight, so you need to run and keep enemies back with bullets where possible. 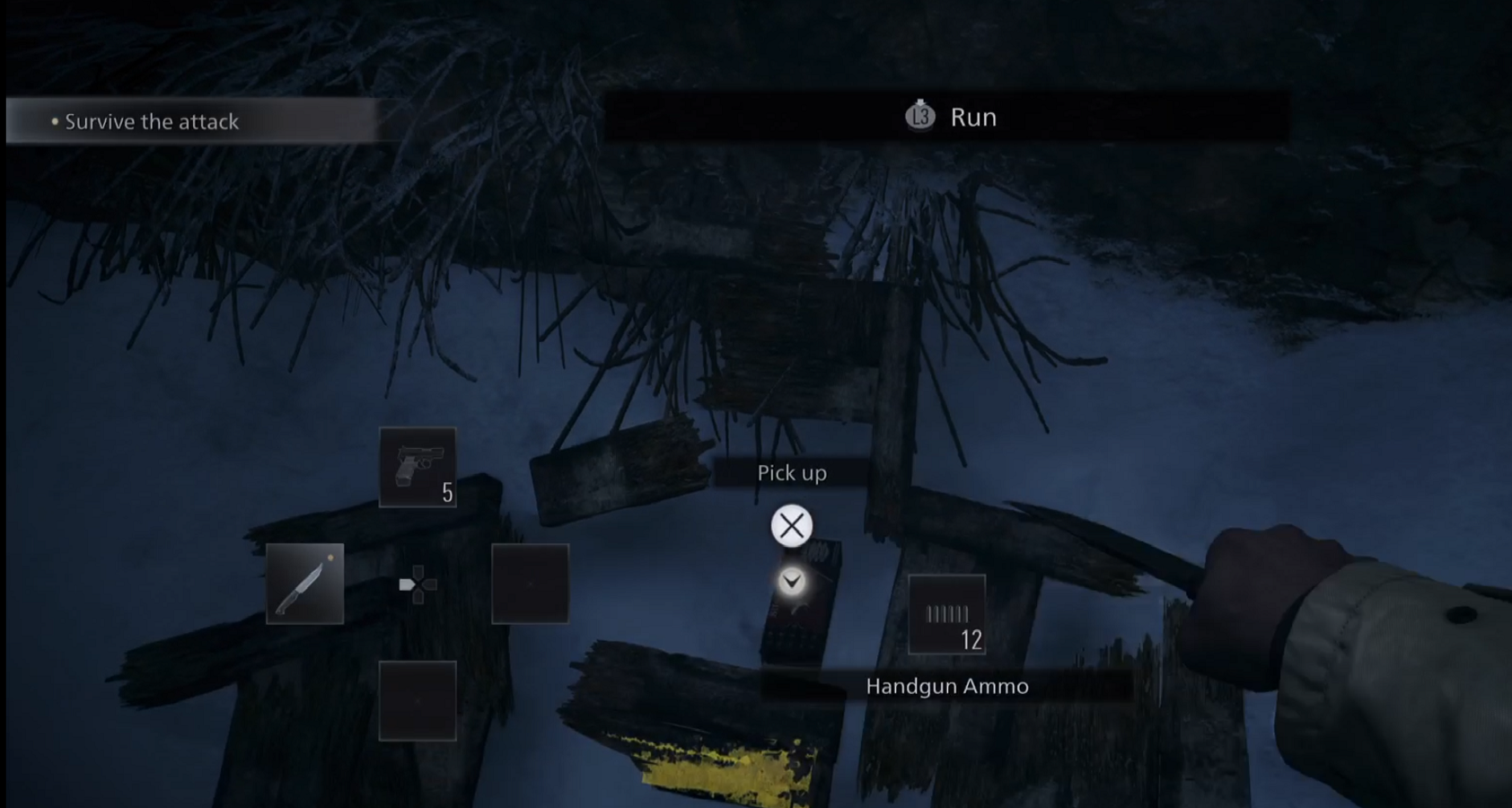 Run around the other side of the building next to you, rather than taking the stairs. There’s a box around the back with 12 Handgun Ammo, which you will need. That’s a dead-end, so turn around and head back the way you came, but take the stairs on your immediate left. Run around the left of the house until you’re around the back, then head down the slope and take another left, running to the dead-end next to the red barrel. Let an enemy or two get close and then shoot the barrel for a couple of easy kills. Pick up whatever they drop and run back up the slope and into the house – there’s another breakable box in here with Handgun Ammo inside. 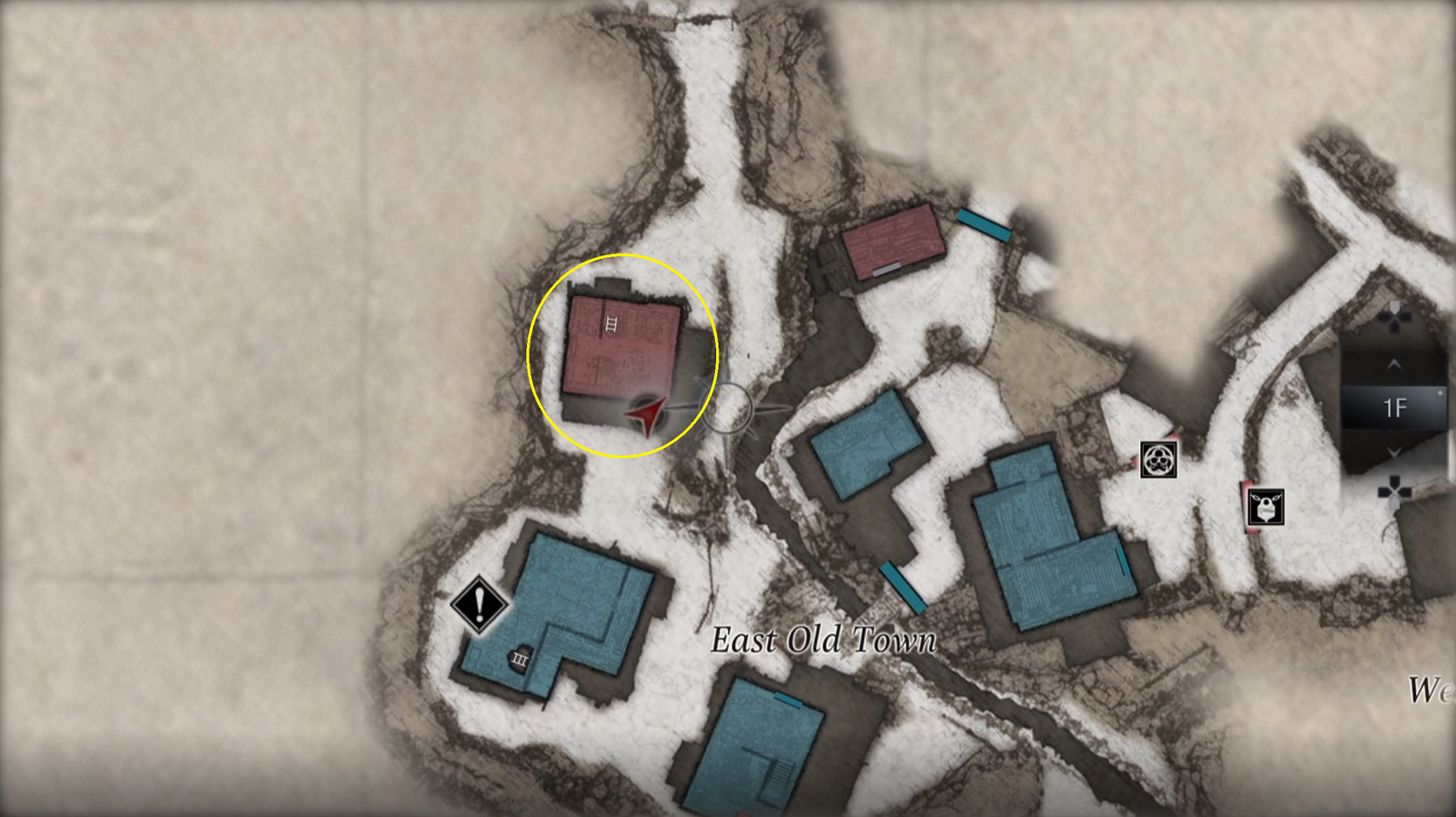 Head up the ladder next to the box, run straight ahead, and drop off the roof. Smash the box open for some more Handgun Ammo. Run down the slope and follow it around, keeping the fence on your left, and loop back around to where you saw the werewolves on the roof. Head up the stairs onto the wooden porch and follow it around until you can enter the building. Barricade the door with the bookcase next to the doorway. In here you’ll find some Gunpowder – a crafting material needed to make ammo – some Handgun Ammo, an Herb, and the M1897 Shotgun. Head through the next room and grab the Handgun Ammo and Gunpowder. 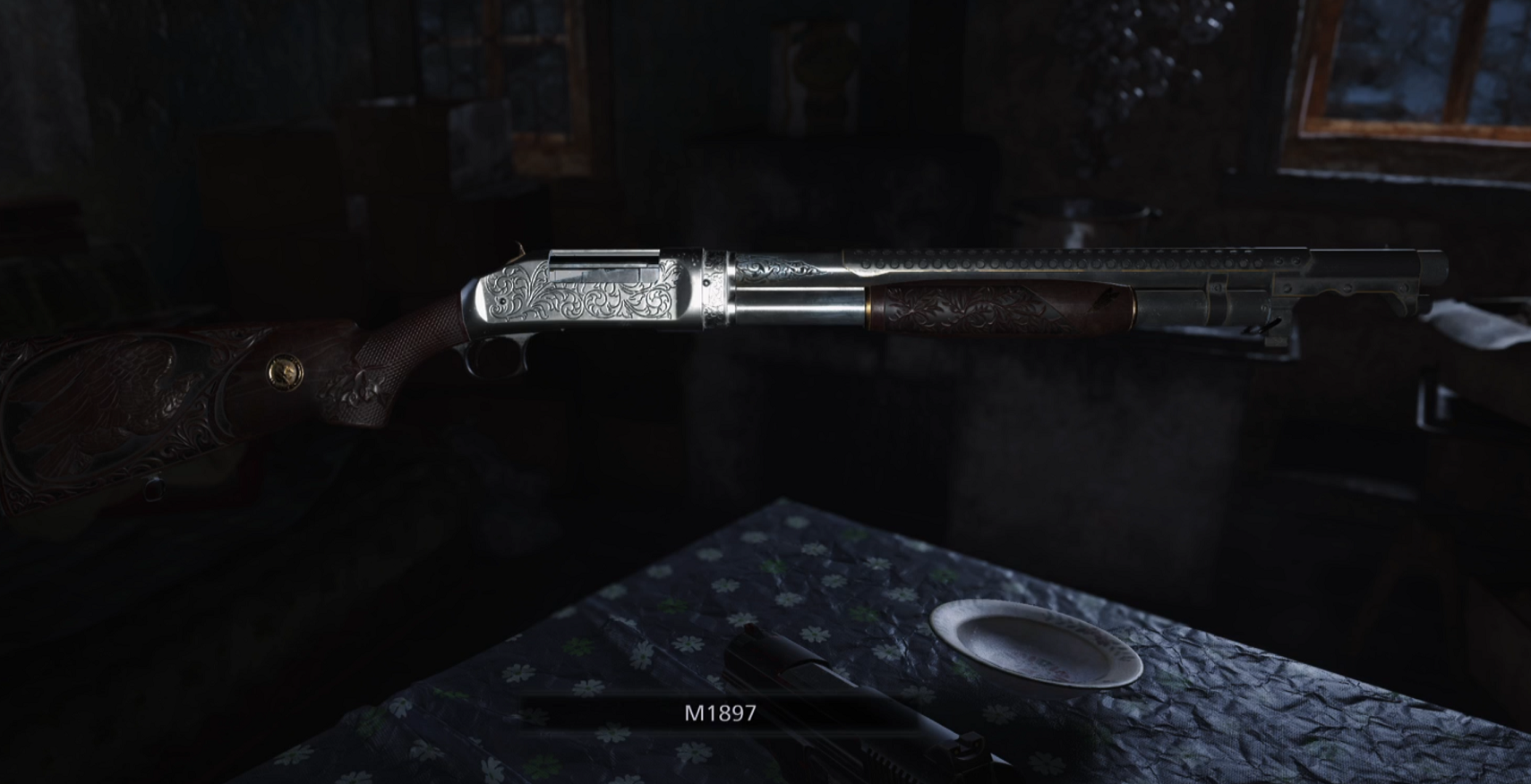 Go down the ladder and collect the Rusted Scrap – another key component for crafting ammo – and follow the tunnel around before crouching out of the exit. Stand your ground against the horde and you’ll eventually be grabbed from behind, triggering a cutscene. When that’s finished, a crone beckons you through the previously locked gate near the red barrel. Before you follow her through, make sure you’ve picked up any loot dropped by enemies you killed in the fight. Once you’re ready, head through the gate. 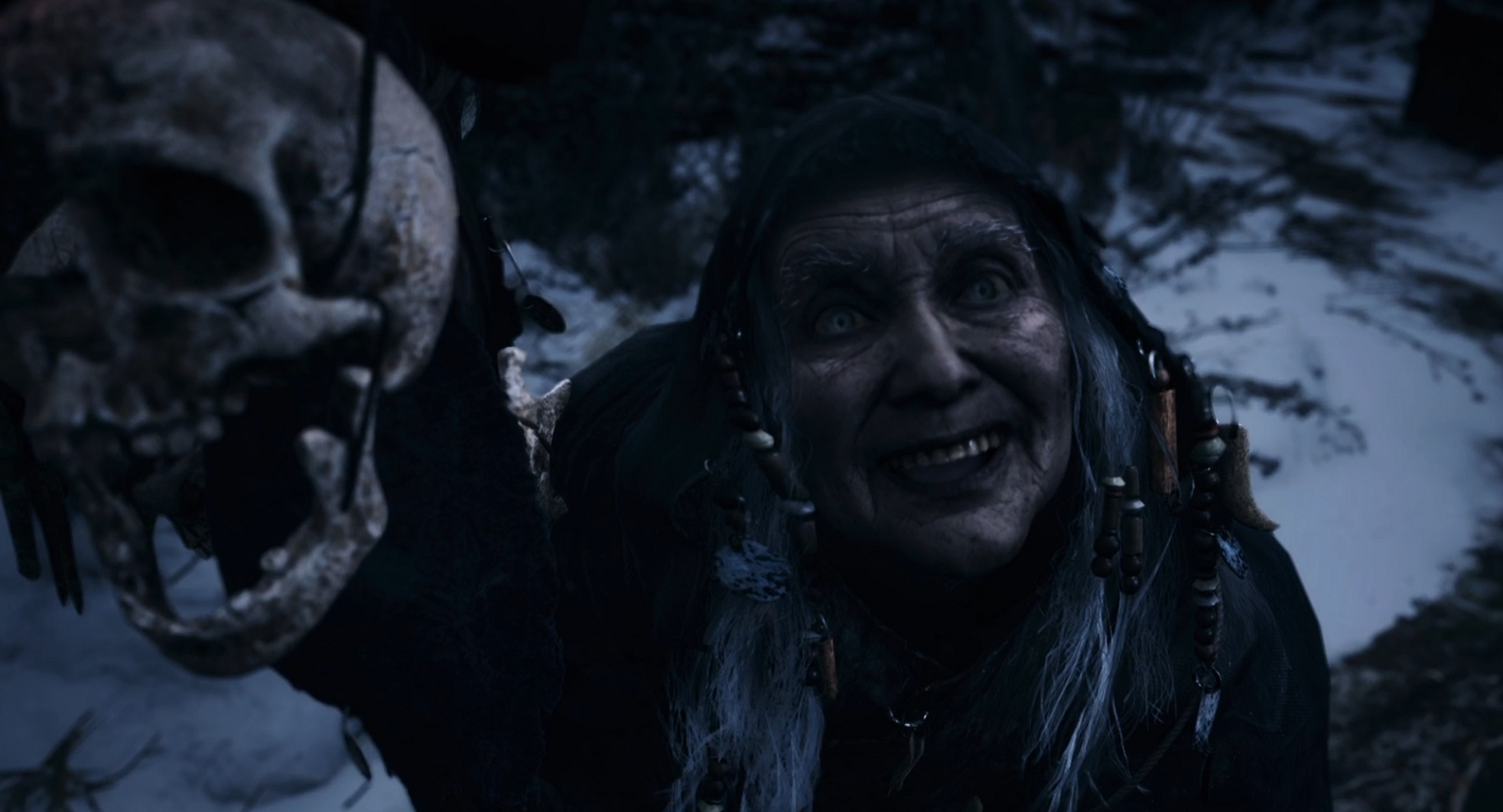 Head inside the church-like building on your left for a note to read and some Chem Fluid to pocket. There’s also a locked drawer in the back room so make sure you interact with it to mark it on your map. Head out of the building and take a left, heading towards the statue of the maiden. There’s something glistening on her shield – shoot it to get a valuable item you can sell to the merchant. To the right of the statue, there’s a tractor with some Rusted Scrap. Once you’ve grabbed that, head back to the graveyard and take the path on the right. Shoot the crow on the tombstone for some Lei to spend and shoot or knife the Goat of Warding on the shrine nearby – yes, the nodding, wooden goat. In the far corner of the graveyard, you can find an Herb next to one of the tombstones.

Walk past the door with the mural on it and head through the iron gates nearby, to the large building on the East side of the graveyard. Inside you’ll find the Maiden Crest, a note, and a typewriter to save your progress. Head outside the other door and down into the field straight ahead. You’ll hear werewolves snarling almost immediately and you might catch a glimpse of them running through the thickets of the field. There’s some Gunpowder to collect on your right, and there’s some more Gunpowder in a box in a small clearing in the field. Head back to the field entrance and walk down the path with the wagon on it, keeping the fence to the field and snarling beasts on your right. On your left, there’s a small fence you can hop over. Enter the building here for some Rusted Scrap and Shotgun Ammo.

Now, I’m sorry to be the one to tell you this, but you have to go through the field. The best way to approach it is to shoot one of the flour bags to cause some confusion and obscure their vision before legging it across. Once on the other side, you can clearly see them and take their heads off with your shotgun. Once they’re down, loot their corpses and have a quick run around the area for other items you missed. When you’ve done that, try the double gate and you’ll trigger a cutscene that shows people hiding in the shack nearby. Head to the shack and get ready to meet some residents. Eh? Eh?

Click the link below for Resident Evil 8 Walkthrough Part 3.