As of this writing, we're just weeks away from the arrival of Crown Zenith, which will herald an end to the long years of Sword & Shield coverage within the Pokemon TCG. Saying goodbye to the 'V' mechanic will be easier for some than others; surely, there is a contingency of fans who are tired of counting on VMAX and VSTAR to carry every game. But it's difficult to deny that The Pokemon Company has become quite creative about it.

Silver Tempest, the penultimate Sword & Shield set, is a prime example of that creativity in action. Check out the best Pokemon V you'll want to pull posthaste to take your matches to the next level. 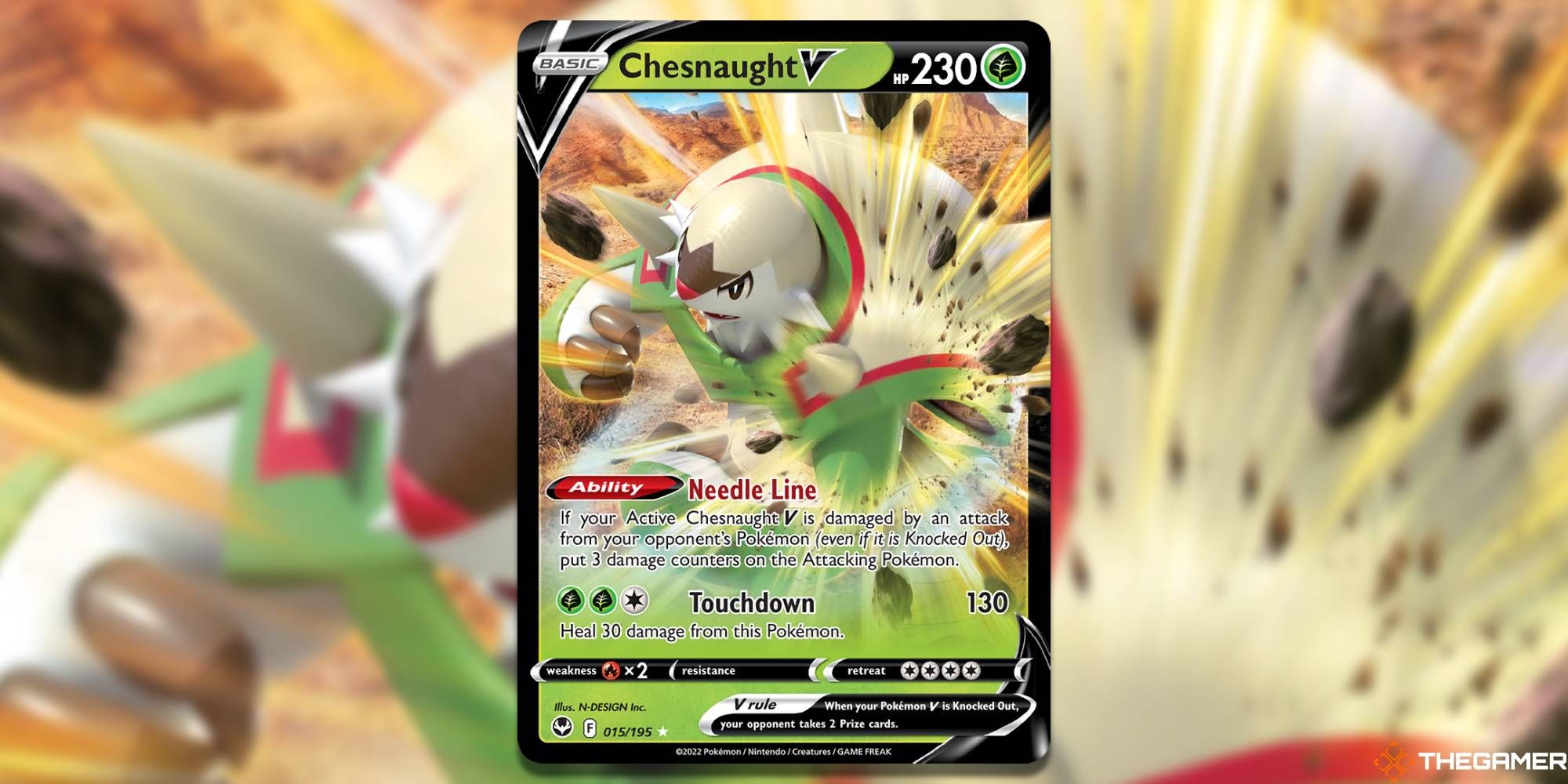 First, how nice is it to see a Chesnaught card again? Talk about a woefully underrepresented starter chain. But we digress. We like this fellow for his defensive pivoting prowess; two Grass Energy and a Colorless for 130 damage is pretty good for a Basic Pokemon (regular Pokemon V are Basic, after all). Being able to heal is the key here, since you can stock Chesnaught V with other stall mechanics and really make him a nuisance.

Needle Line is your classic Pokemon TCG take on in-game moves like Spikes; all told, this is just a downright decent new wall for the meta, and we're excited to see if it pops up in any competitive decks. 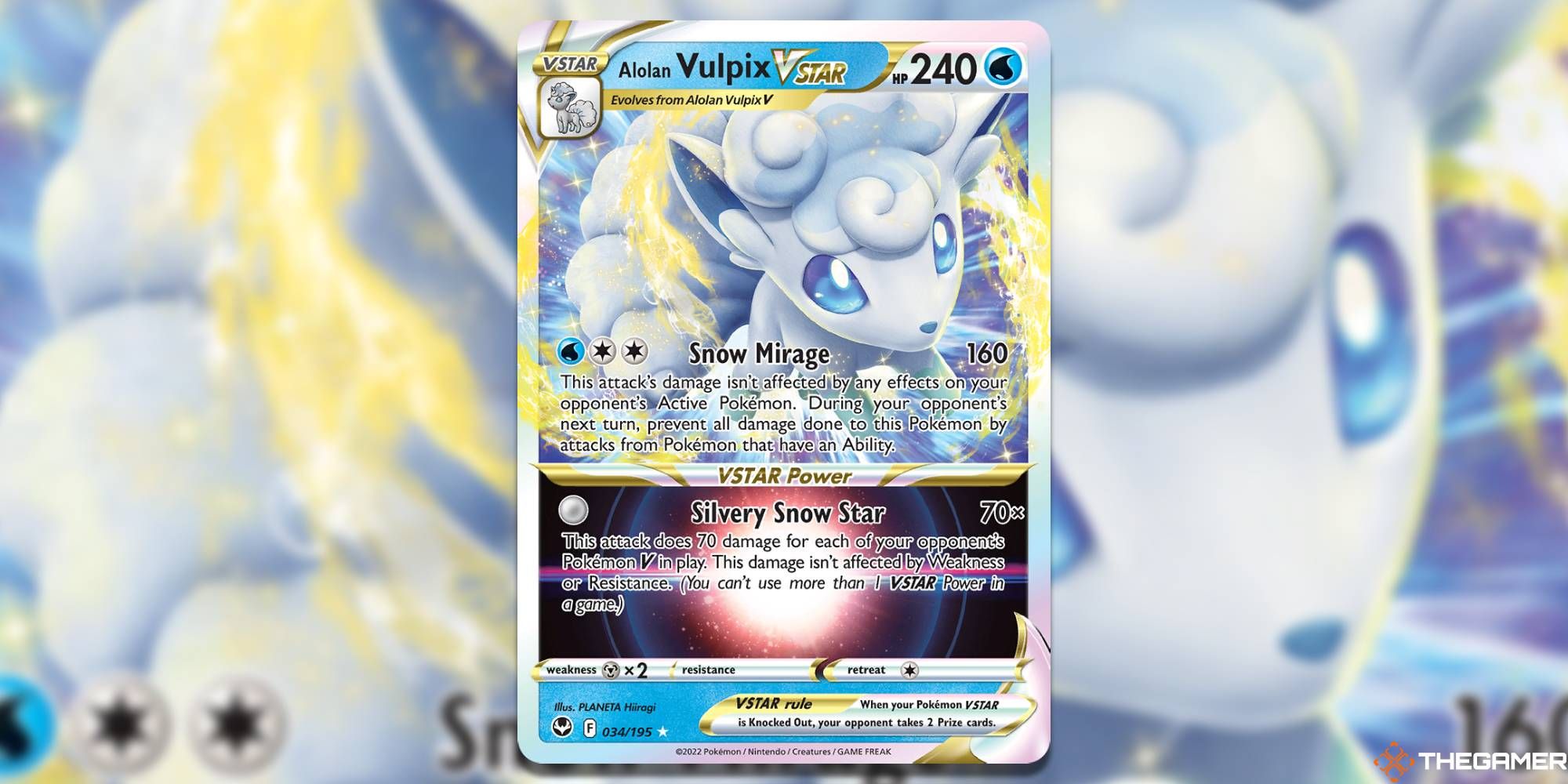 Look at this sweet baby. Alolan Vulpix VSTAR is more or less the star of Silver Tempest, showing up all over promotional packaging to remind the world, loud and proud, that it's an unevolved mascot of cuteness leading the charge for a change. Indeed, should Crown Zenith refrain from repeating the trick, Alolan Vulpix VSTAR will be the only unevolved Pokemon to achieve such lofty heights.

One cannot survive on cuteness alone, but Alolan Vulpix VSTAR sure does try. Its 240 HP is pretty low even for a VSTAR; after all, STARs tend to have lower hit points than their MAX counterparts. Snow Mirage is clearly a defensive ability, and Silvery Snow Star can rack up the damage. But we can't think of many instances in which you'd want to tap into this as your sole VSTAR power per game. 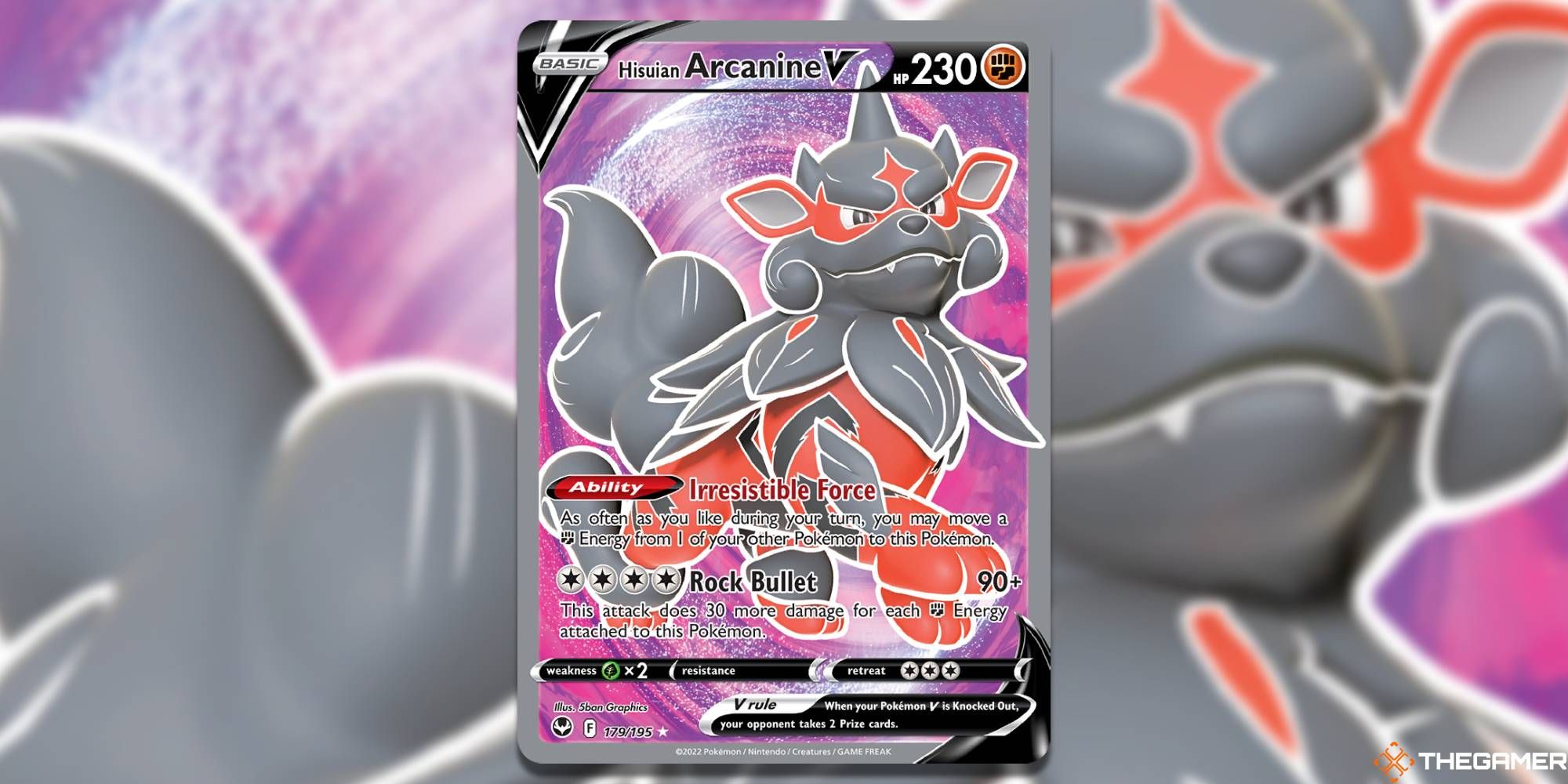 Feel free to disagree, but when we think of Fire-type Pokemon, the notion of moving heaps of Fire Energy between Pokemon feels like a fairly common mechanic. Of course, Hisuian Arcanine V is not a Fire Pokemon, but rather, a Fighting-type; still, there's something to be said for tradition. Hisuian Arcanine V, as far as we're concerned, feels fiery. Fitting, that.

Between the opportunity to 'feed' this Arcanine as many Fighting-type Energy cards as you can on a given turn, and 360 (!) damage if all four Colorless cost for Rock Bullet fit the bill (and room for even more with extras), Hisuian Arcanine V's bite is just as beastly as its bark. One big caveat to all this — it's also quite frail, thus limiting its powerful capabilities to specific setups. 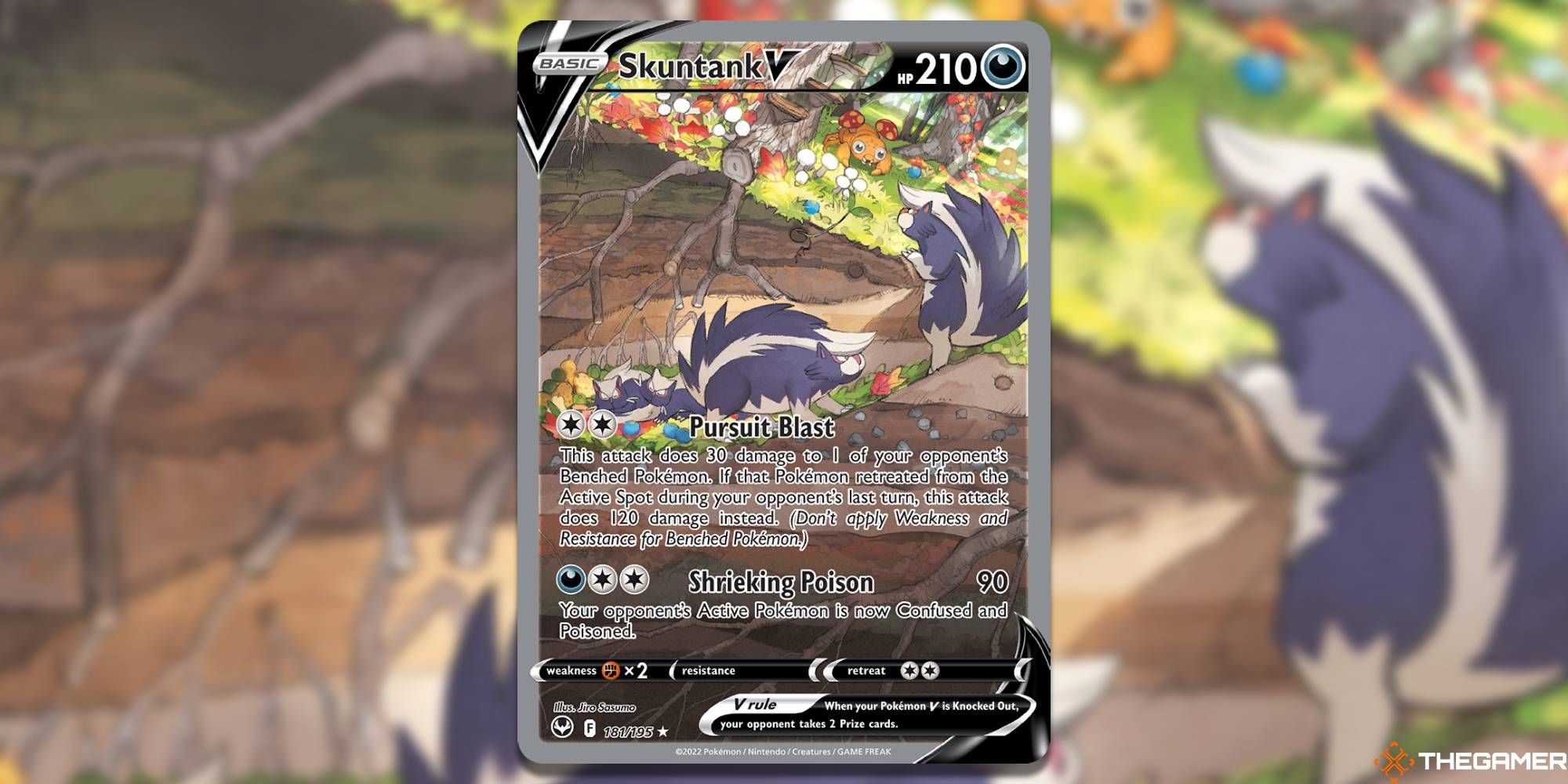 Skuntank V is already popping up in common play. Shrieking Poison comes at a fairly low Energy cost for inflicting Poison and Confusion, with an extra 90 damage to boot. But the real weapon here is Pursuit Blast. 30 damage for two Colorless is, on its own, so shrug-worthy that it feels like it belongs in the days of Jungle and Fossil; the fine print, however, can wreck certain strategies outright.

If the targeted Pokemon just retreated on your opponent's previous turn, that two Colorless hits for 120, and when you consider that this is happening across enemy lines, so to speak, deep into their bench? You can level the playing field even against such nuisances as the illustrious Mew VMAX if you've got enough Skuntank Vs to go around. 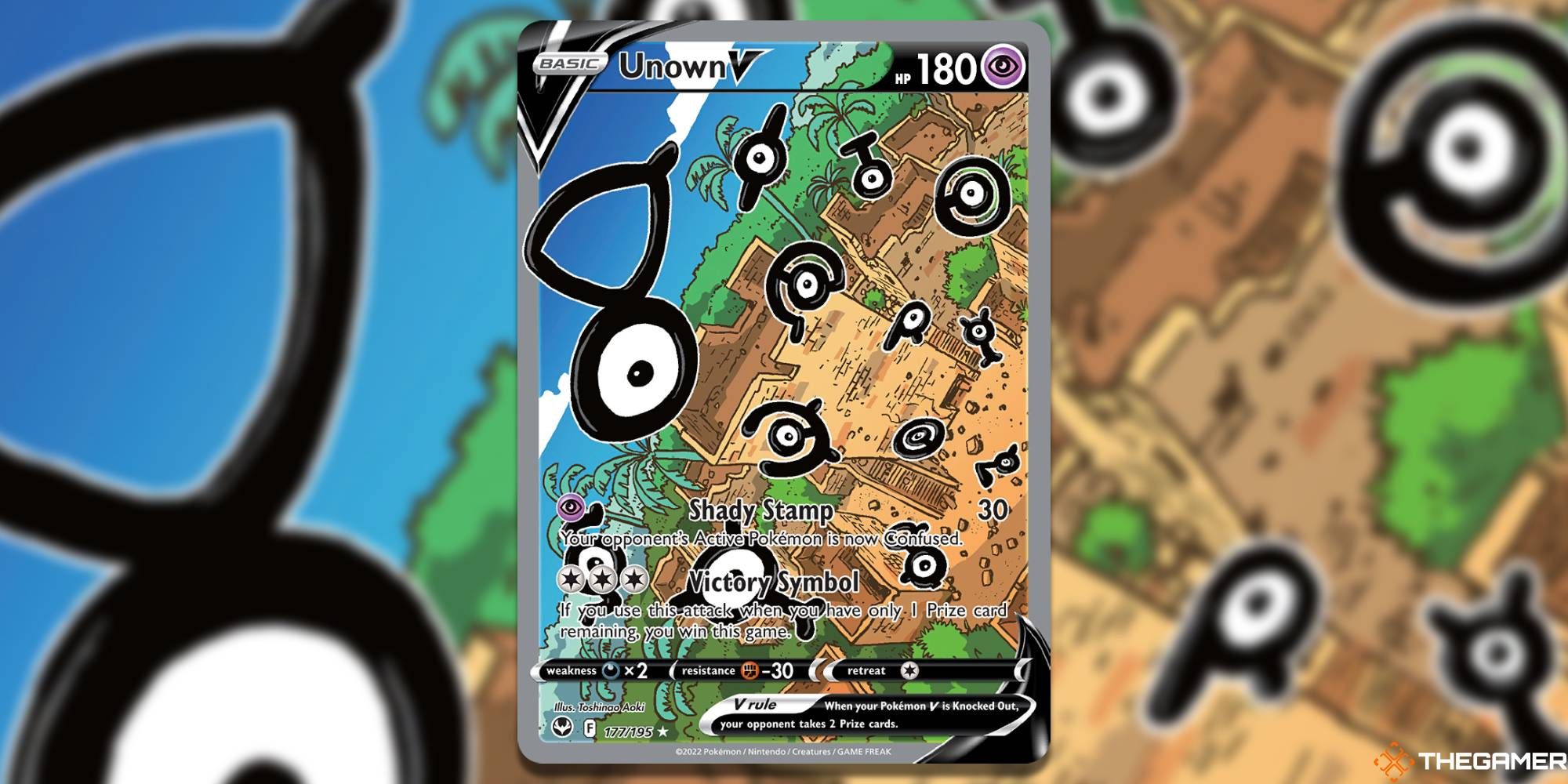 You may have noticed that there's a surprising number of Basic V-class Pokemon cards on our list. Indeed, Unown V continues the trend, and in this case, it might be better than its VSTAR evolution. Those words need all the italics they can get, because seriously, talk about weird. Perhaps competitions between big-name players will prove us wrong on that score, but out of the box, we do believe the pre-evolved version is the stronger of the two.

Unown V is highly situational, however. It's all about that Victory Symbol. Three Colorless Energy to outright win the game if you've only got one Prize Card left? Sneak one or two of these into pretty much any conceivable deck as a last ditch effort to incite a dramatic turnaround. It's like those trick decks that rely on the opponent dealing thousands of damage to charge up a counterattack, except without any of the effort. 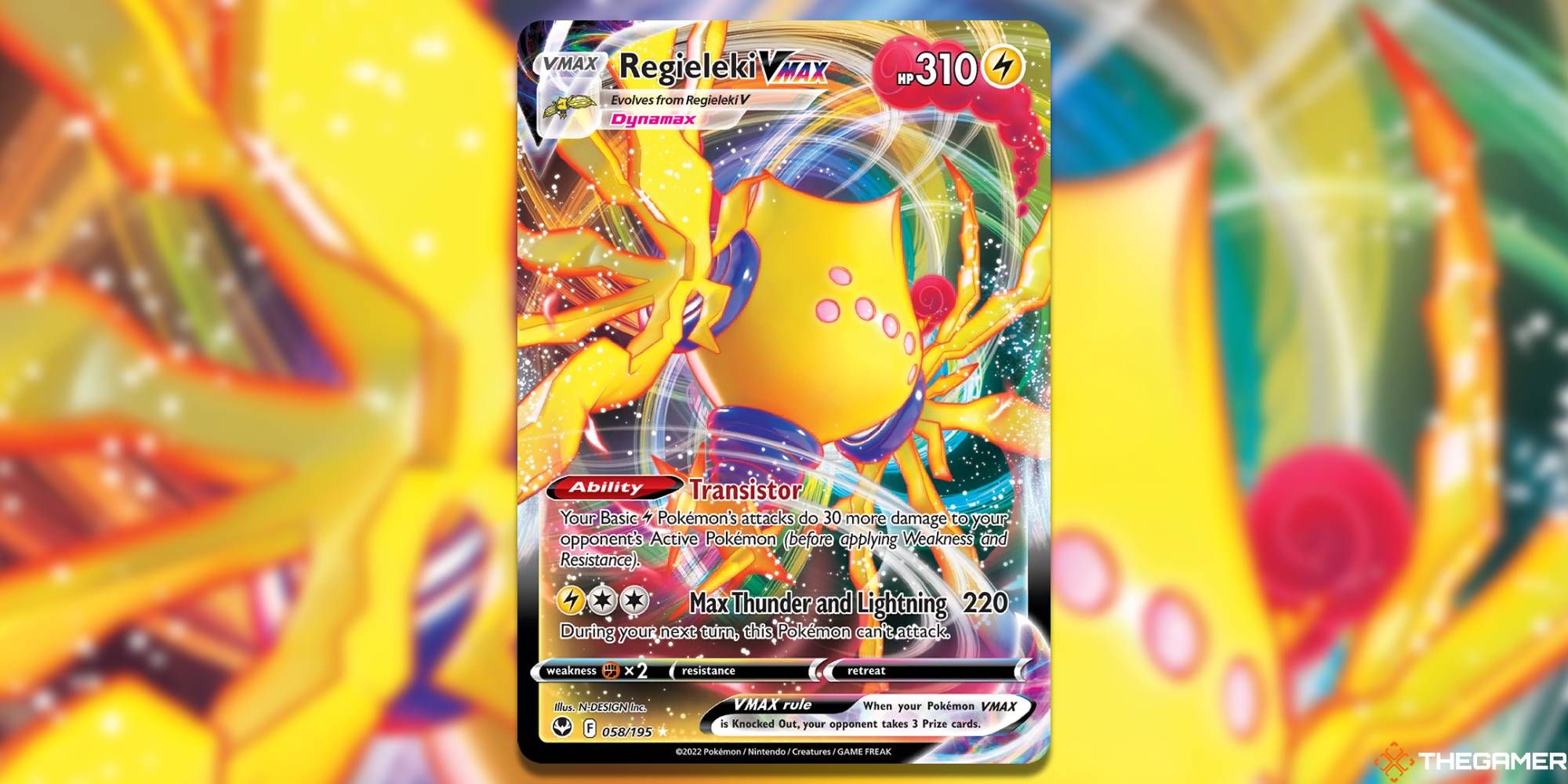 Max Thunder and Lightning's relatively low Energy cost for 220 damage is somewhat offset by the fact that Regieleki VMAX cannot attack the following turn. That said, this speedy devil has a zero for its retreat cost, meaning if it can survive your opponent's next blow (and with 310 HP, only Fighting-type Pokemon have a high chance of knocking it out), you can swap Regieleki VMAX with someone else just fine.

But Regieleki's more of a utility card, a team player, if you will. The Transistor ability's extra 30 damage for Basic Electric Pokemon might not sound like much, but it's about building momentum. Tools that raise attacks by another 30 or so further pair quite nicely here. And while you may be wondering just how many Basic Electric-types can possibly benefit from this in major matches, consider this: high-skill players have been using Regieleki VMAX to power up Vikavolt V all the way up to 280. Zap. 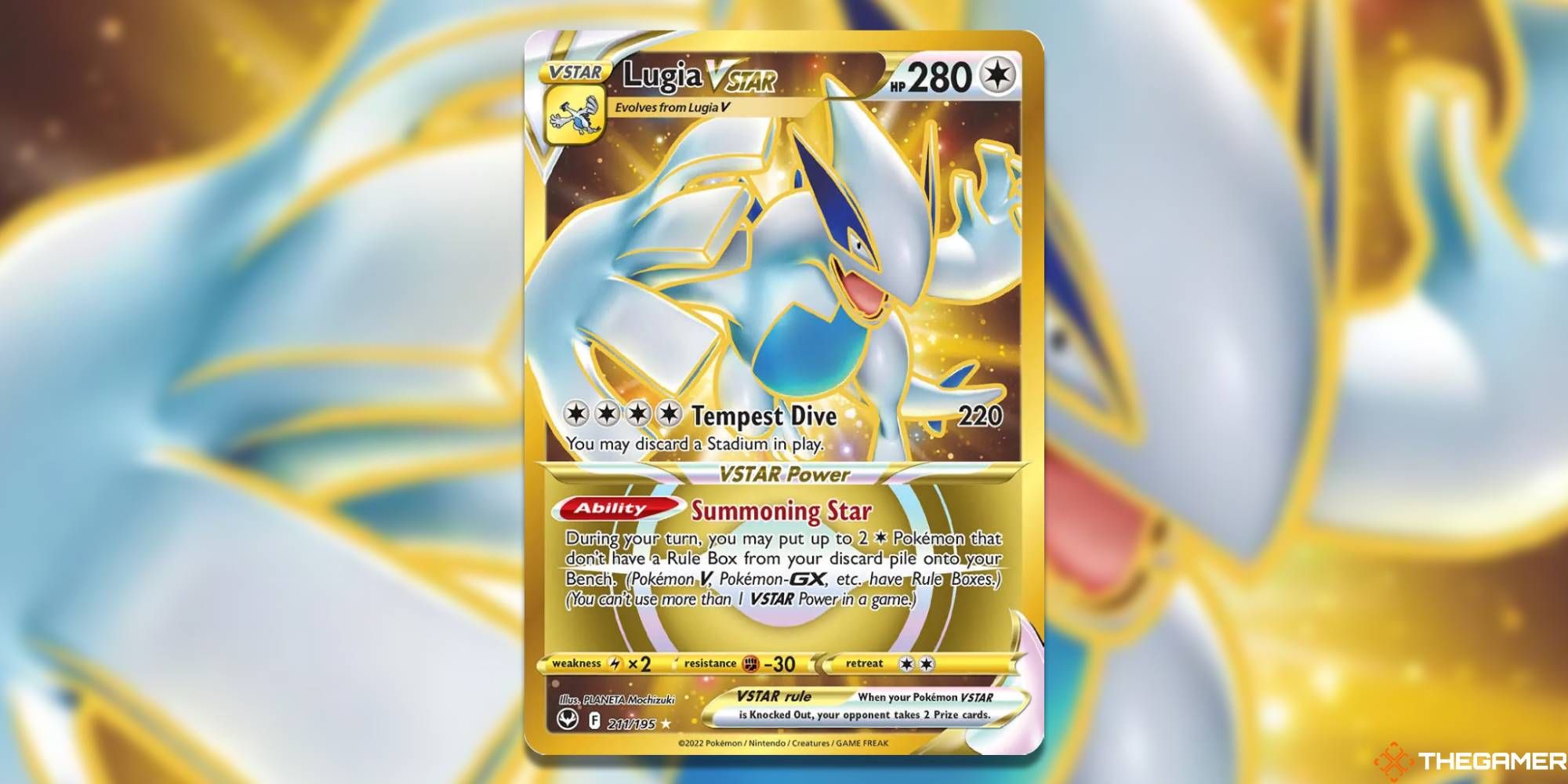 Honestly, was there any other choice for the top spot? Lugia VSTAR was the talk of the town pre-release. Next to Alolan Vulpix VSTAR, it's also the card that's been at the forefront of Silver Tempest's marketing campaign, and whereas Vulpix gets by on adorableness alone, Lugia brings the titular tempest in spades.

Lugia VSTAR's 220-damage, Stadium-destroying, Tempest Dive is pretty excellent, but on its own, it wouldn't give our Johto flier the chomps to change the game. Rather, it's all about Summoning Star; as VSTAR Powers go, this is in the uppermost echelon. Archeops is the breadwinner to take advantage of this; pulling them out of the discard pile, using their Primal Turbo ability, and giving your powerhouses Special Energy like the new V-Guard to reduce damage taken and Powerful Colorless to ramp up Tempest Dive — that's the name of the game here.

In fact, this means that Lugia VSTAR itself is the prime candidate to take advantage of the Archeops that it summons from the void. It's this synergy that often separates the very best Pokemon cards from the rest of the list, and as we close out the Sword & Shield era, Lugia VSTAR carries that tradition oh so proudly.