Outriders’ Inferno quest takes players to one of the most unique tilesets in the game. Players will have to traverse a snowy mountain and a deadly volcano to deal with a deadly second boss with multiple phases.

This mission has a rather tough boss fight and not many chests to loot. If you’re struggling to kill enemies at this stage, it’s recommended that you either lower your World Tier or farm the previous story mission before you proceed. Co-op also isn’t a bad idea if you can get a group together. Get ready to fight a ton of lava-infused spiders. 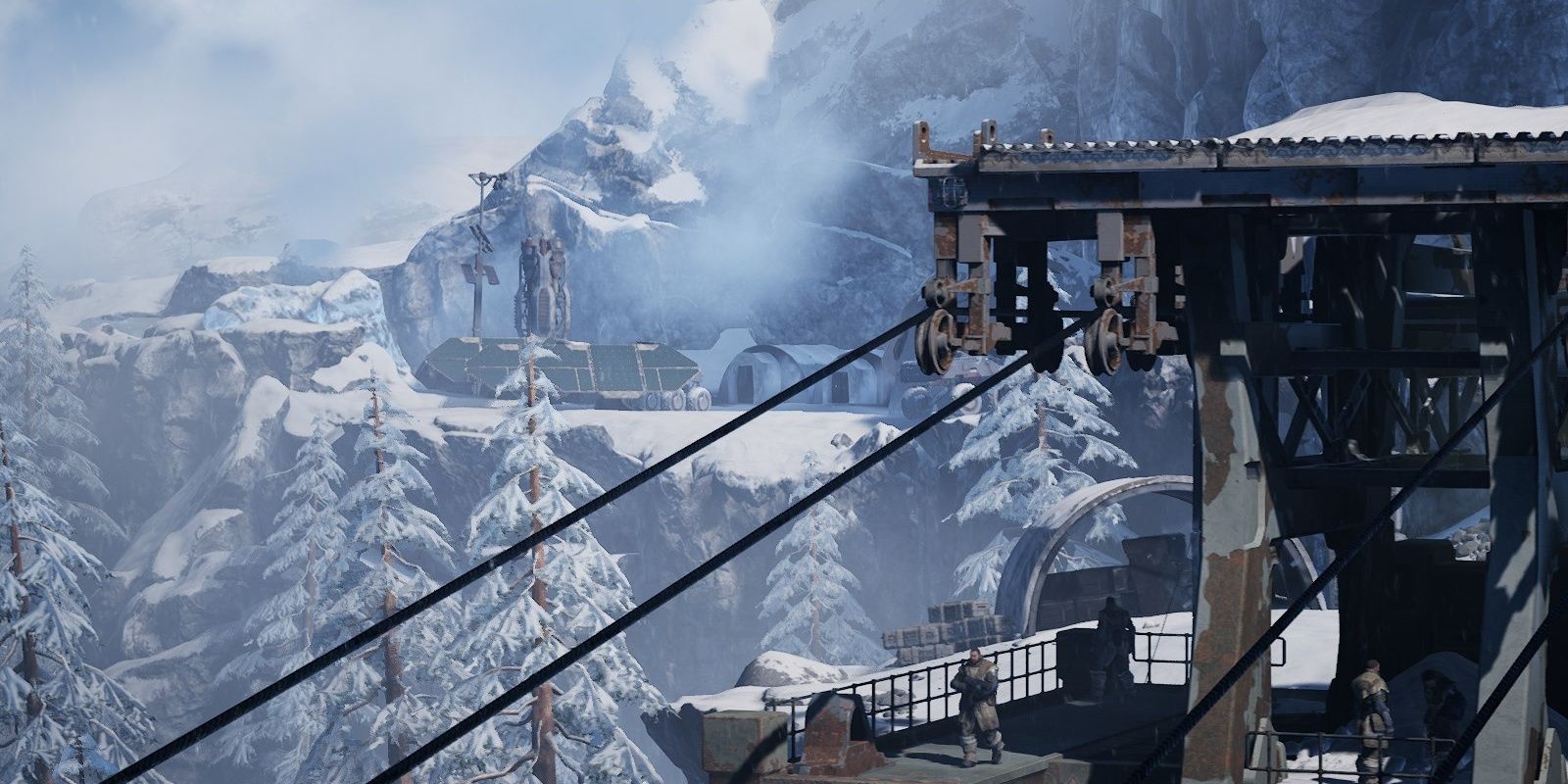 Before you can reach the radio tower at the top of the mountain, you’ll need to assist the locals with handling a problem with the nearby volcano. Speak to Captain Dunham to start the first quest step, then make your way out of the hub town into the mountain. 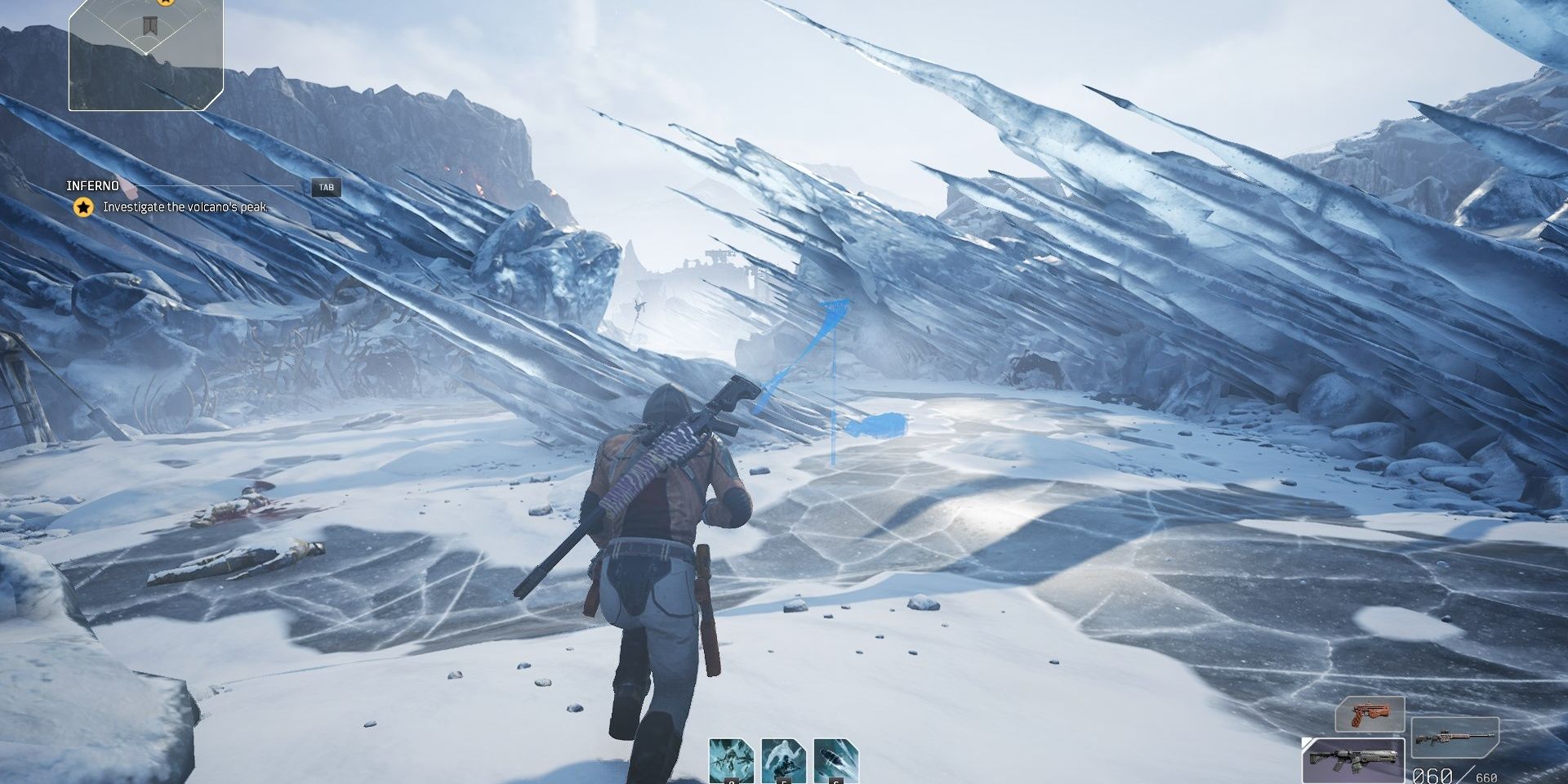 No enemies will ambush you at the start of the trail, so feel free to do some sightseeing. Partway through the path, you’ll be able to plant a flag and restock your ammo. Continue along the path to find the first group of enemies. 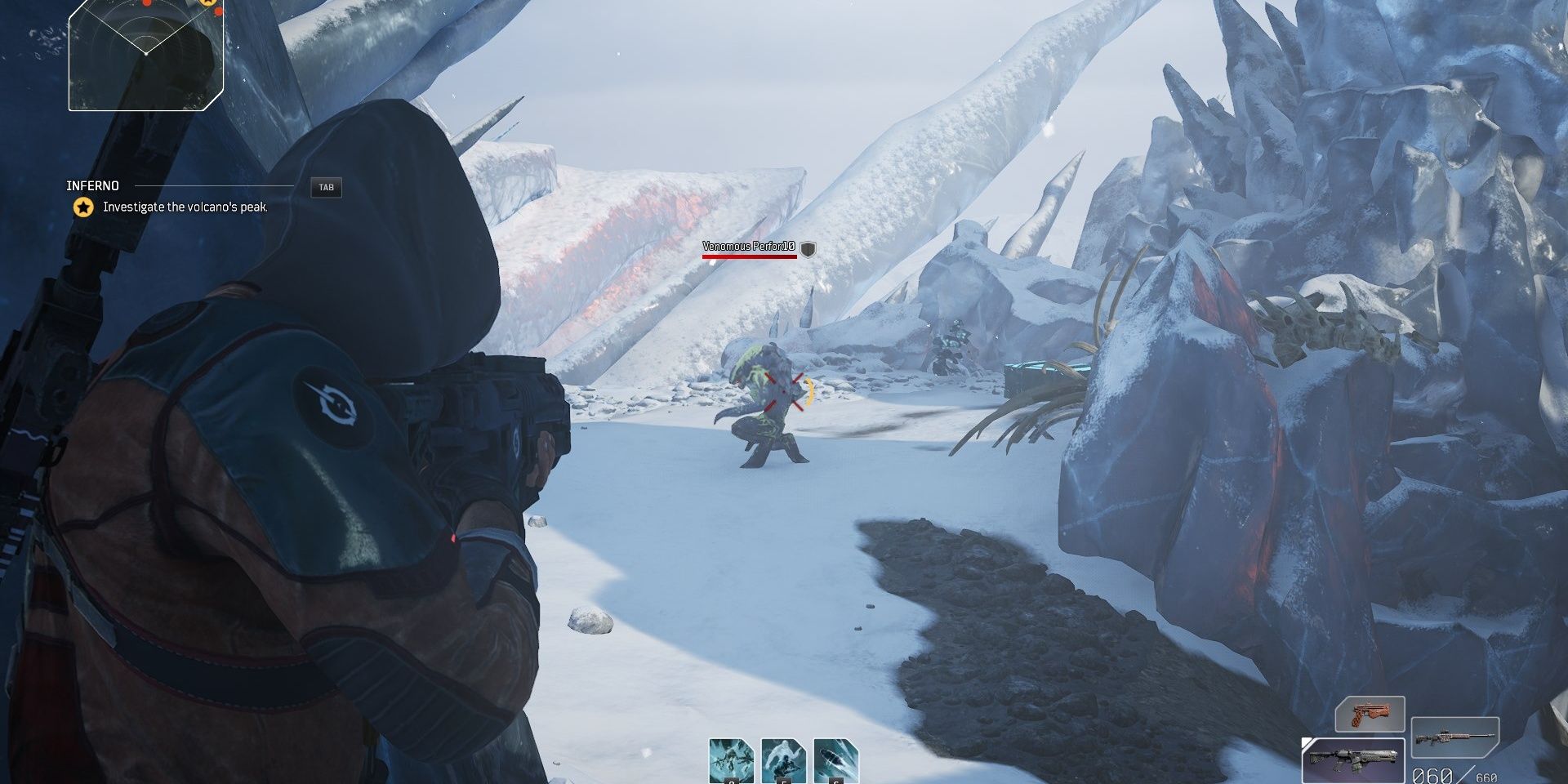 A Venomous Perforo is the first enemy you’ll find, guarding a chest beside the path. Take out the Perforo, grab the loot from the chest, then take out the waves of spawning Perforos directly ahead. 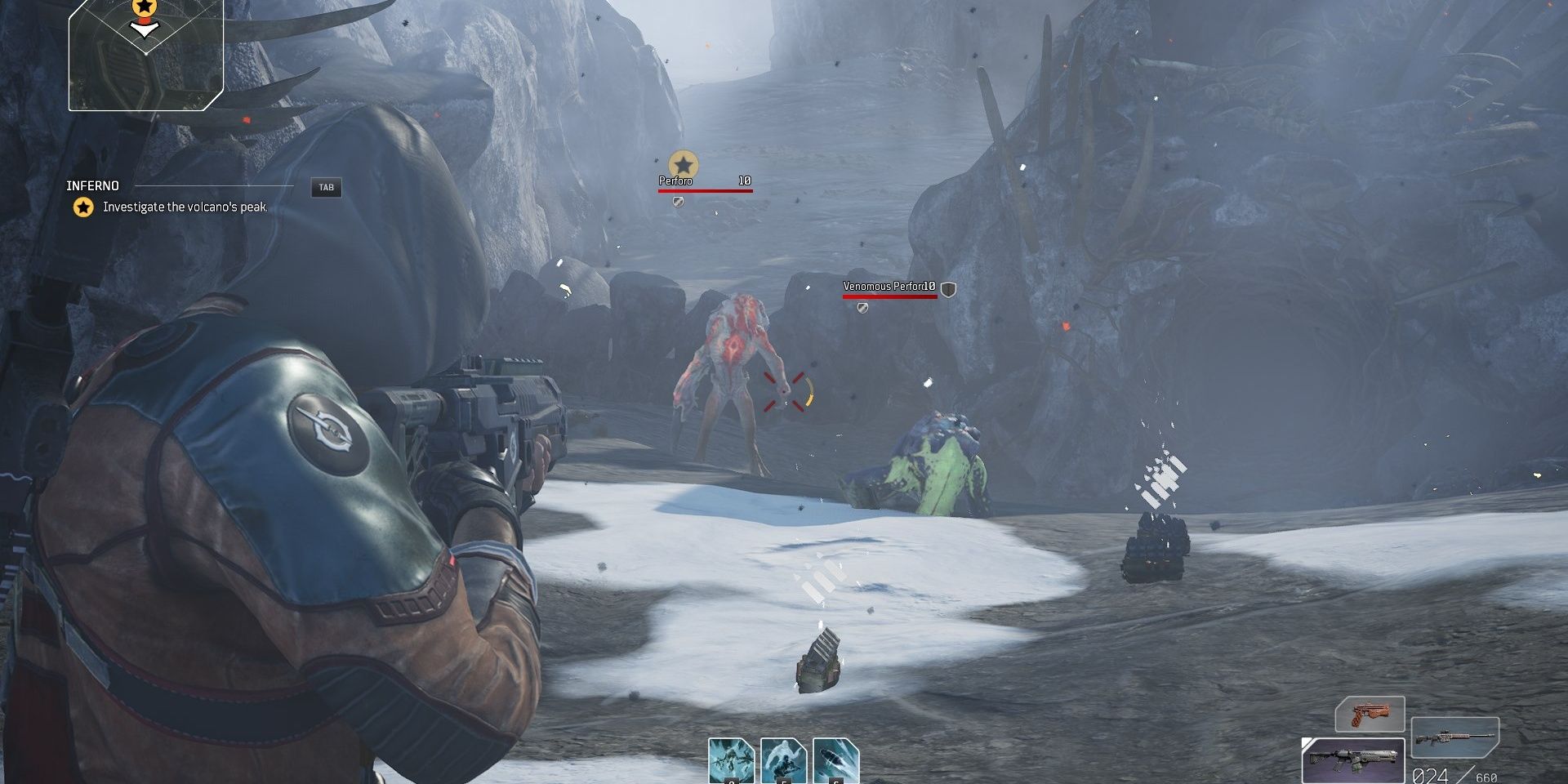 These Perforos will keep spawning out of the ground for quite a few waves. Any AoE abilities or weapon mods do wonders here. With all of the enemies dead, destroy the pile of rubble to proceed. 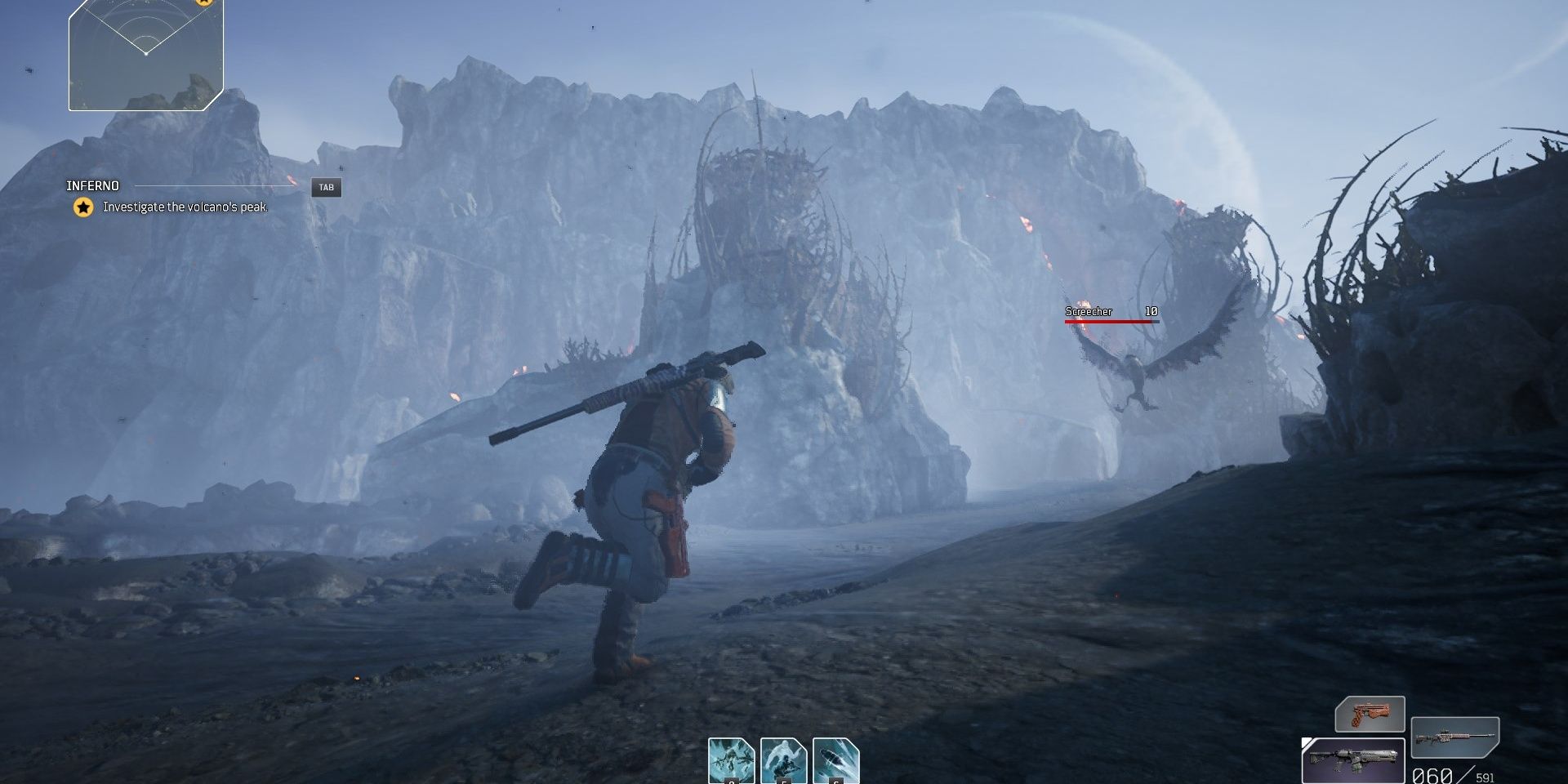 Up ahead are two Screechers, the first aerial enemy you’ll face in Outriders. These enemies will hover mid-air and attack you with a fan of projectiles. You can either kill these enemies by sniping them from afar or playing at close range. If you stick under a Screecher, they’ll dive bomb you after a few seconds, giving you a chance to unload a shotgun or SMG into them while they’re grounded.

Alternatively, removing a third of their health in a short timeframe will force them to land. Whatever strategy you use, be mindful of their wide AoE attacks and aggressive dives. Kill both of the Screechers, then push further into the volcano. 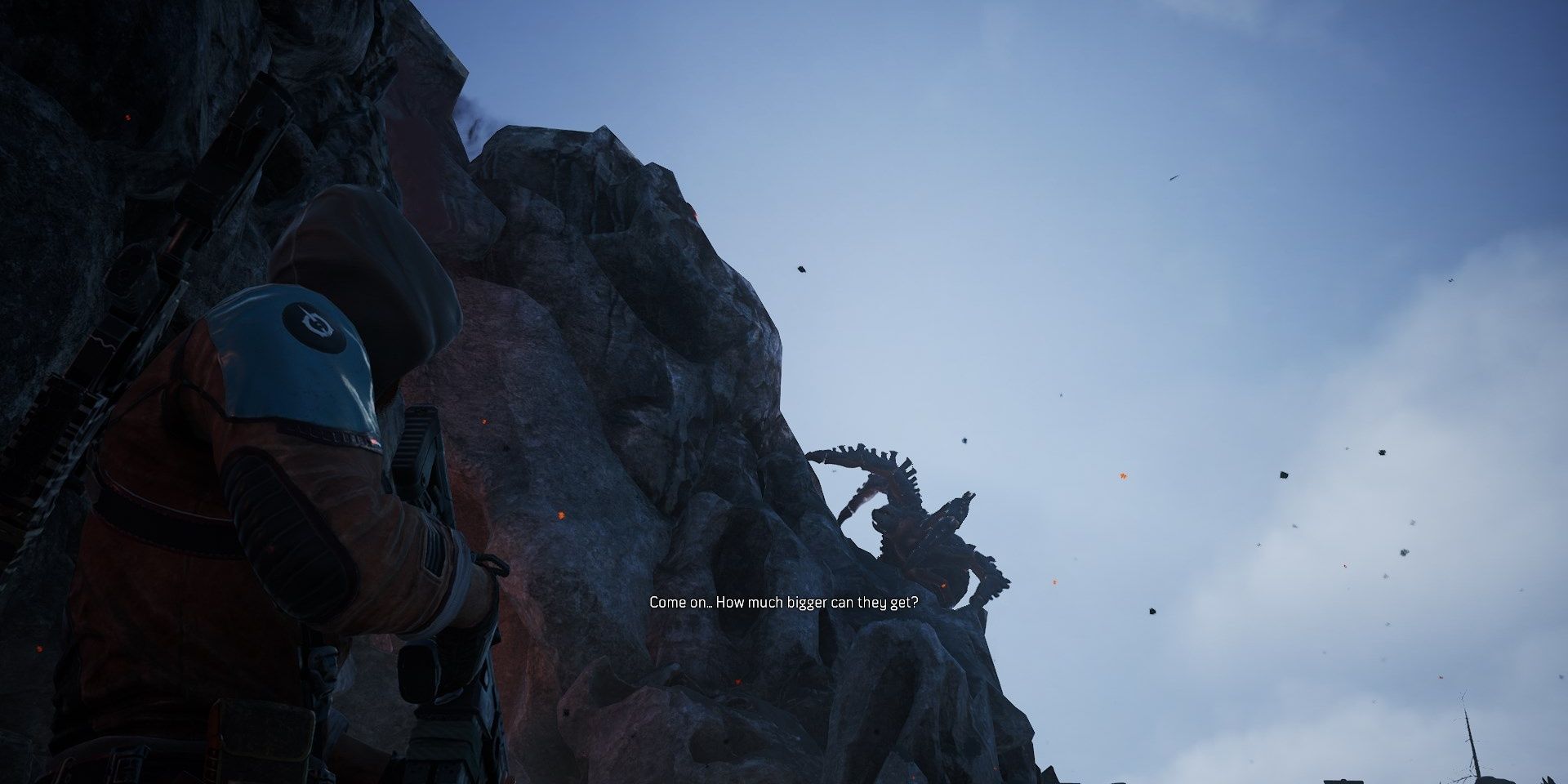 It seems you found the issue with the volcano. A massive lava spider can be seen climbing up the side of the volcano. Follow the path to catch up with the spider. 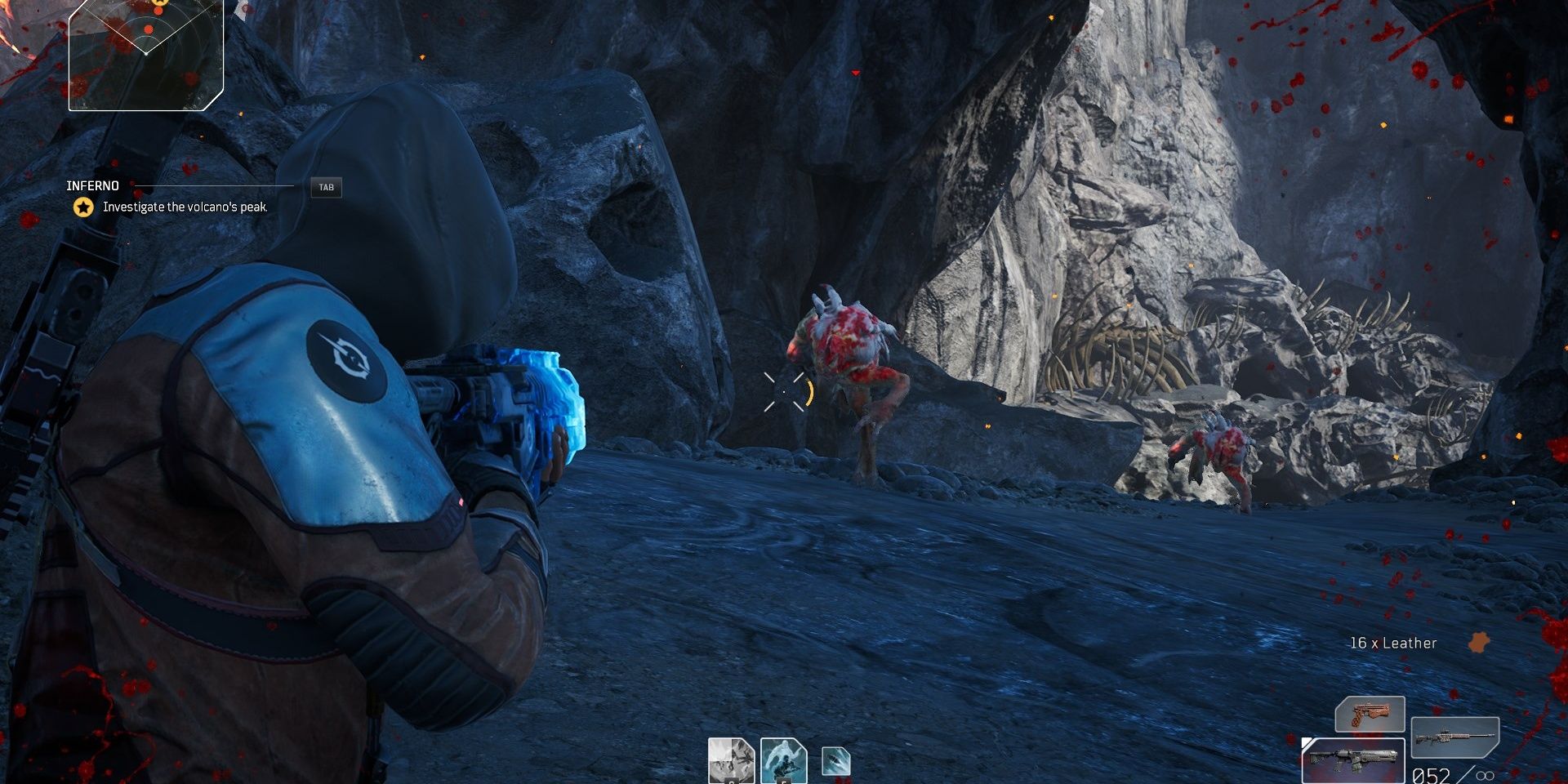 A short trek up the path will reveal even more Perforo enemies. Besides an Alpha Perforo, these enemies are fodder and aren’t a real threat. Use the techniques from the last mission to defeat the Alpha, using melees to prevent staggers and rolling whenever it starts to leap.

After you kill the Alpha Perforo, head left to find a chest near an overlook. 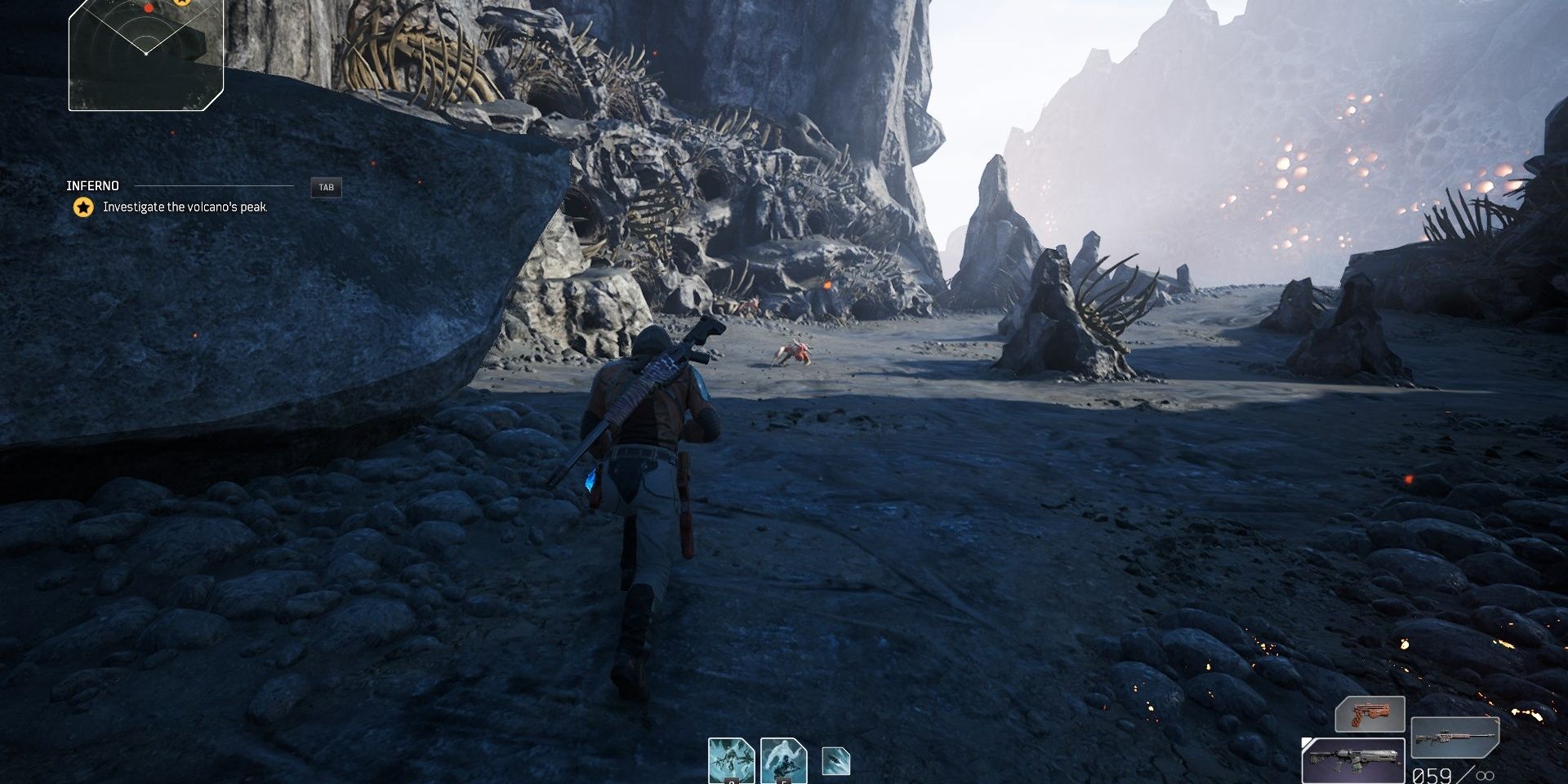 Perforo enemies will spawn out of a small nesting ground. You can spawn kill them while they’re crawling out of their nesting hole. The first few waves consist of fodder Perforo enemies, nothing that a few bullets can’t deal with. An Alpha will spawn during the final wave, so be prepared to take it out with your abilities and high-damage weapons. When you’ve dealt with the Beasts, break the pile of rubble and press on. 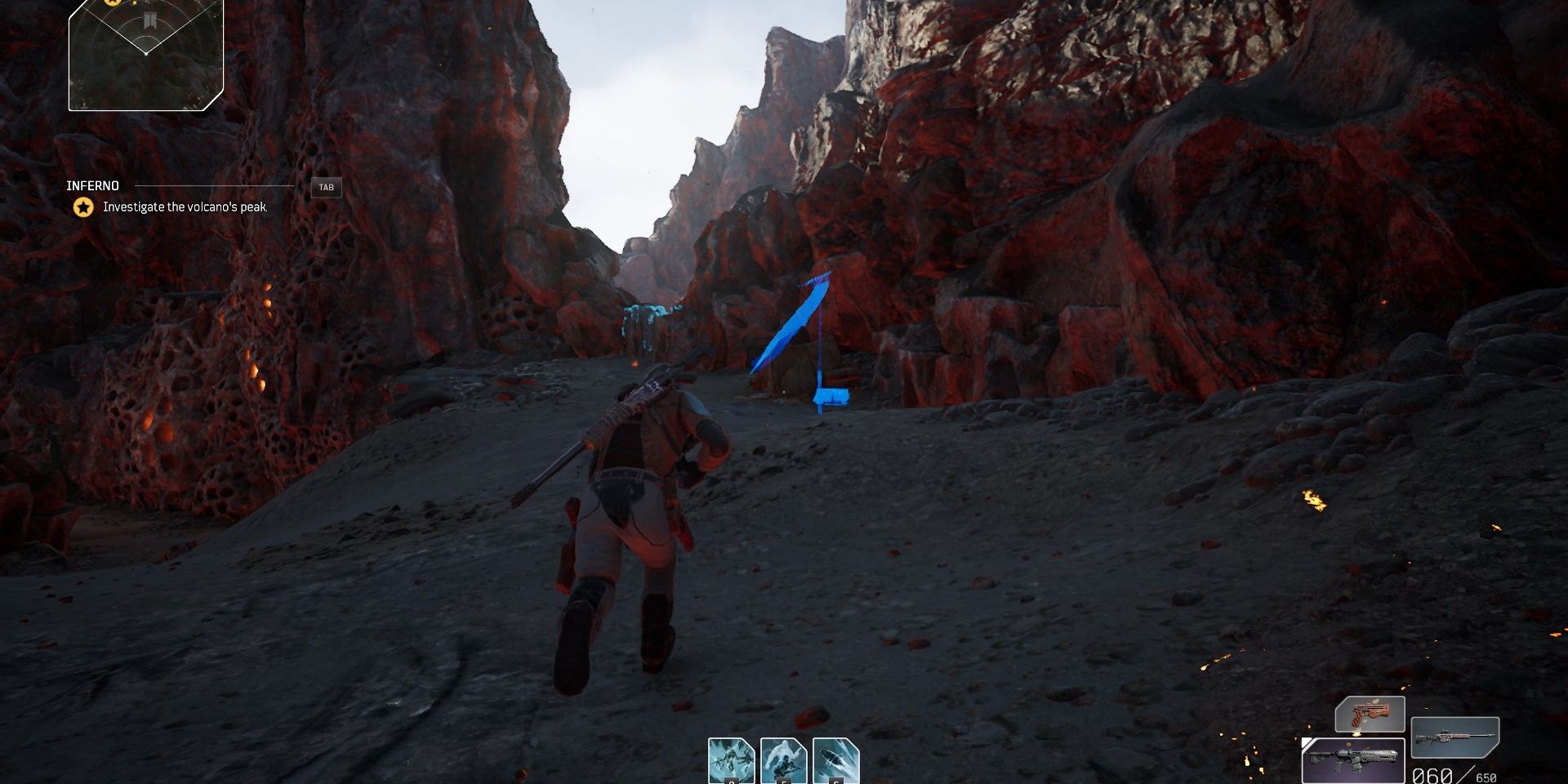 Up ahead is a hologram you can plant a flag into. Stock up on ammo, then head left of the flag to reach the boss. 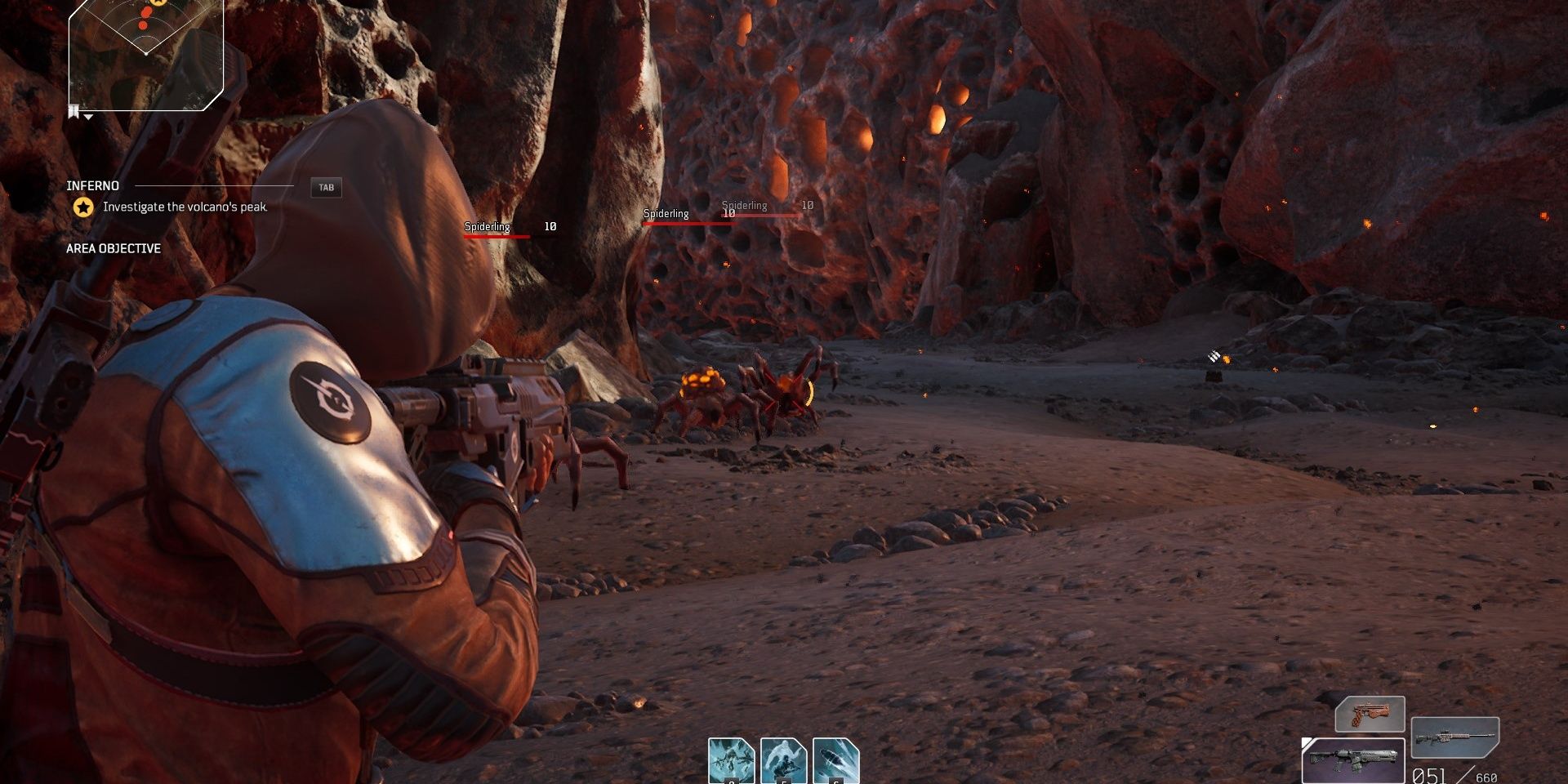 The lava spider will make a quick appearance, scurrying into the volcano. In its wake will be a wave of Hatchlings that explode if they get close to you. They also explode when they die, meaning a few well-placed shots can detonate a whole group of them. 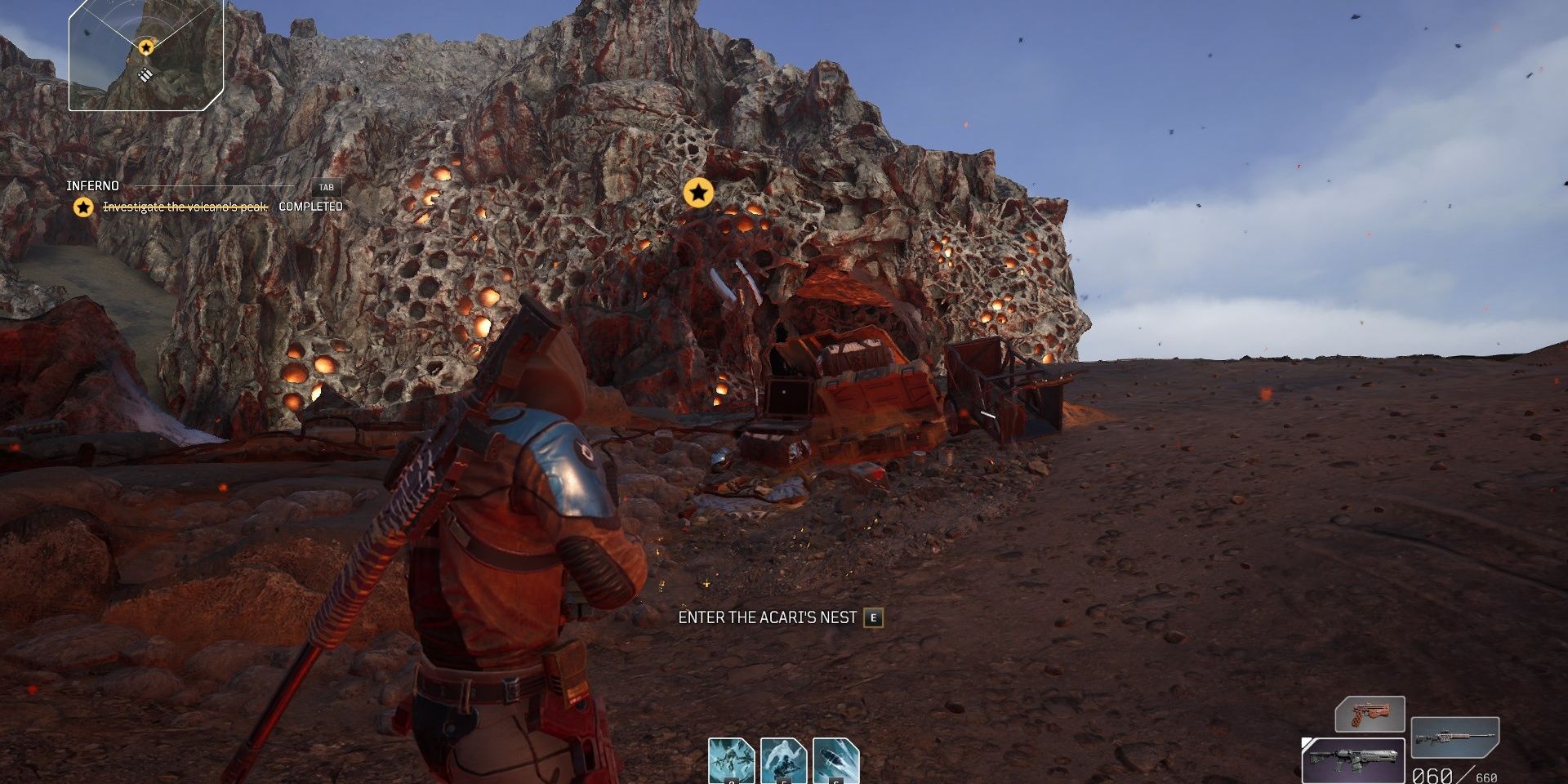 Follow the path the spider was taking to find its nest. Interact with the scouting equipment when you’re ready to fight the spider. 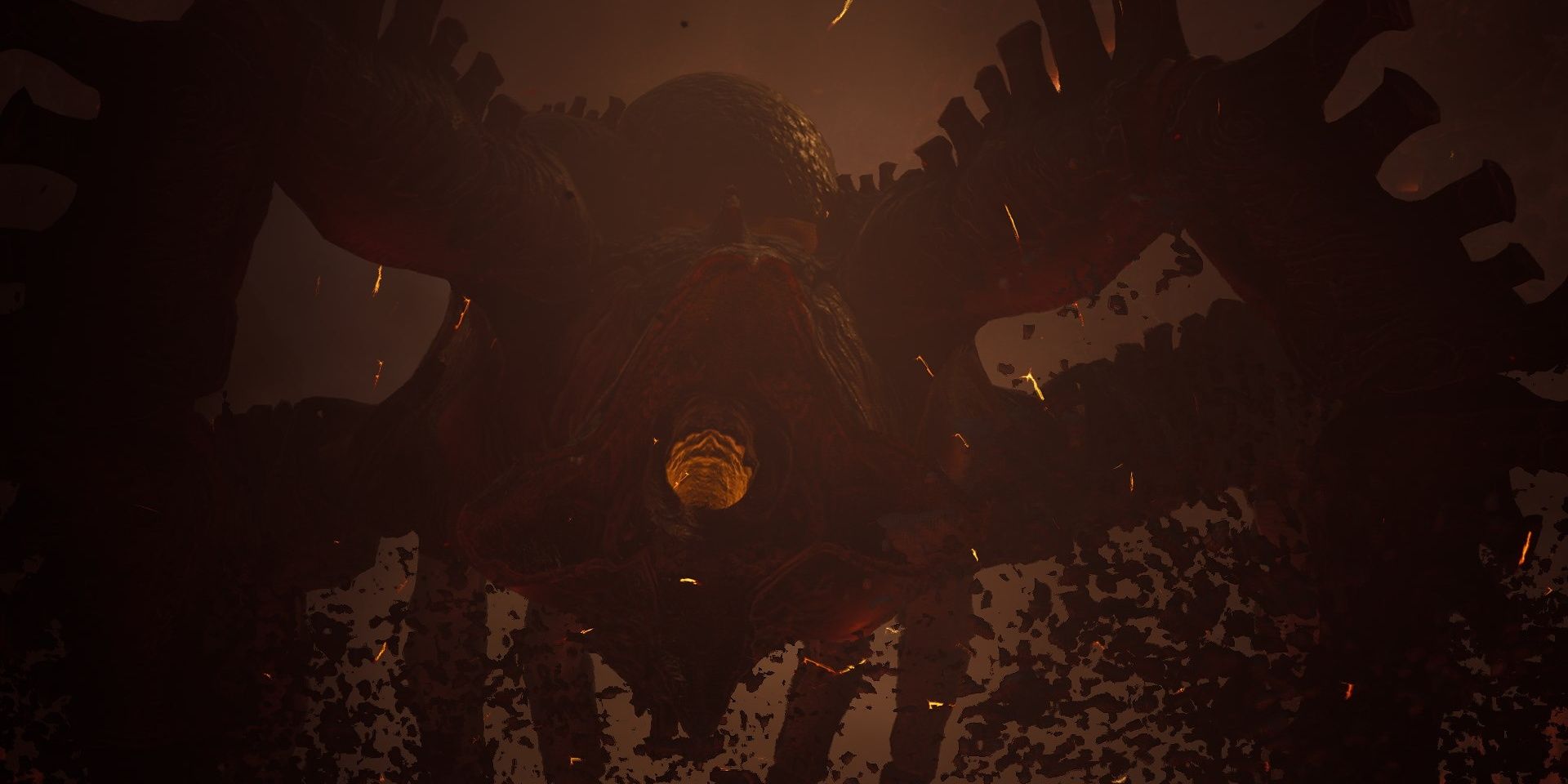 Defeating the Molten Acari is a three-step process. This boss fight has three phases that each behave somewhat differently. The core fight is the same: shoot the spider until it’s dead, but there are a surprising number of mechanics tied to this fight that can mop the floor with you if you aren’t ready. 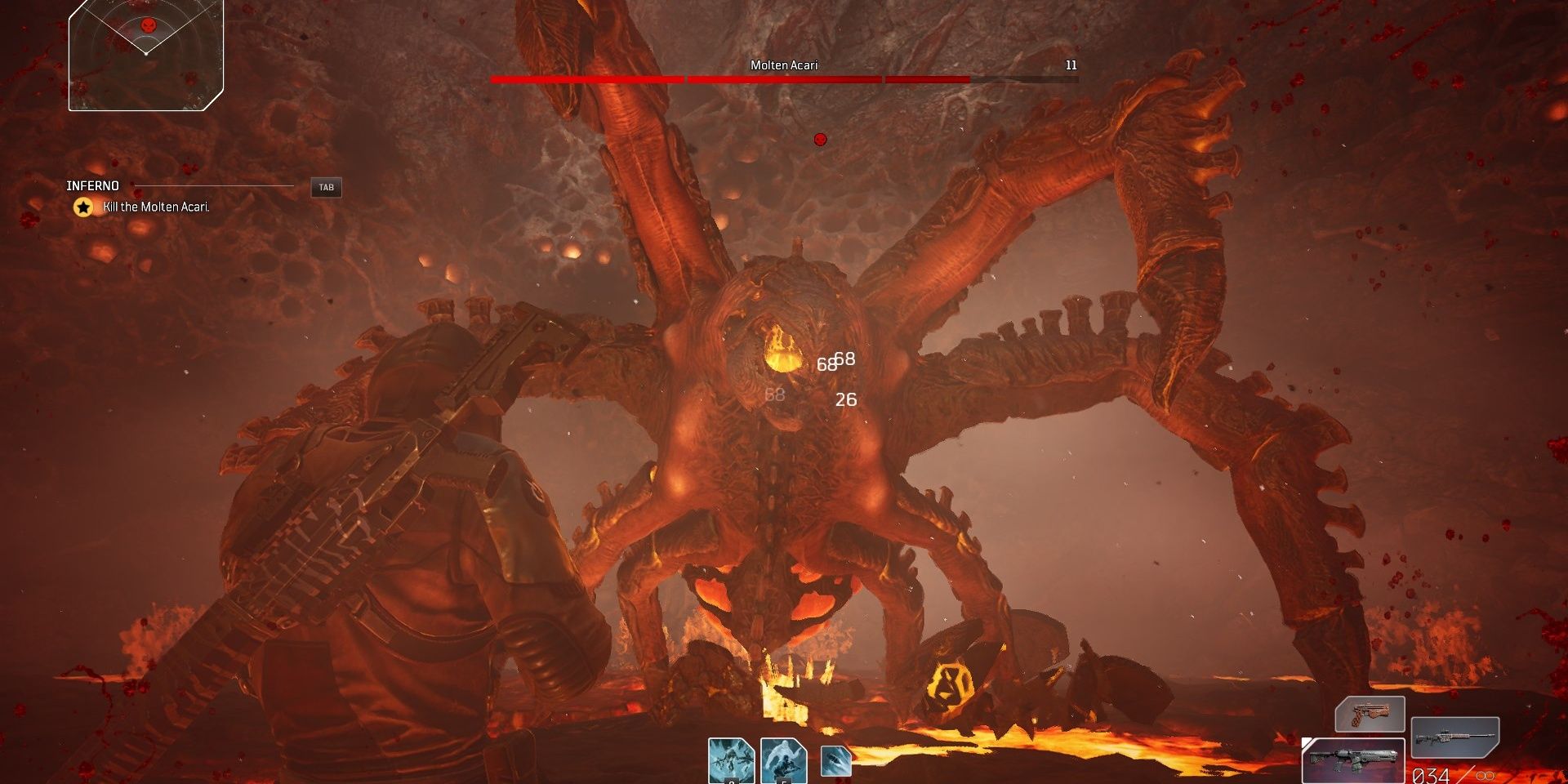 The Molten Acari will attack you head-on during this phase with no help. This is a strict one-on-one fight that involves dodging telegraphed AoE attacks. You’ll need to keep an eye out for the following attacks:

Beyond that, just be sure you don’t wander into the lava on the outskirts of the arena. Most of these attacks don’t give much time for a reaction, so be ready to dodge at a moment’s notice. 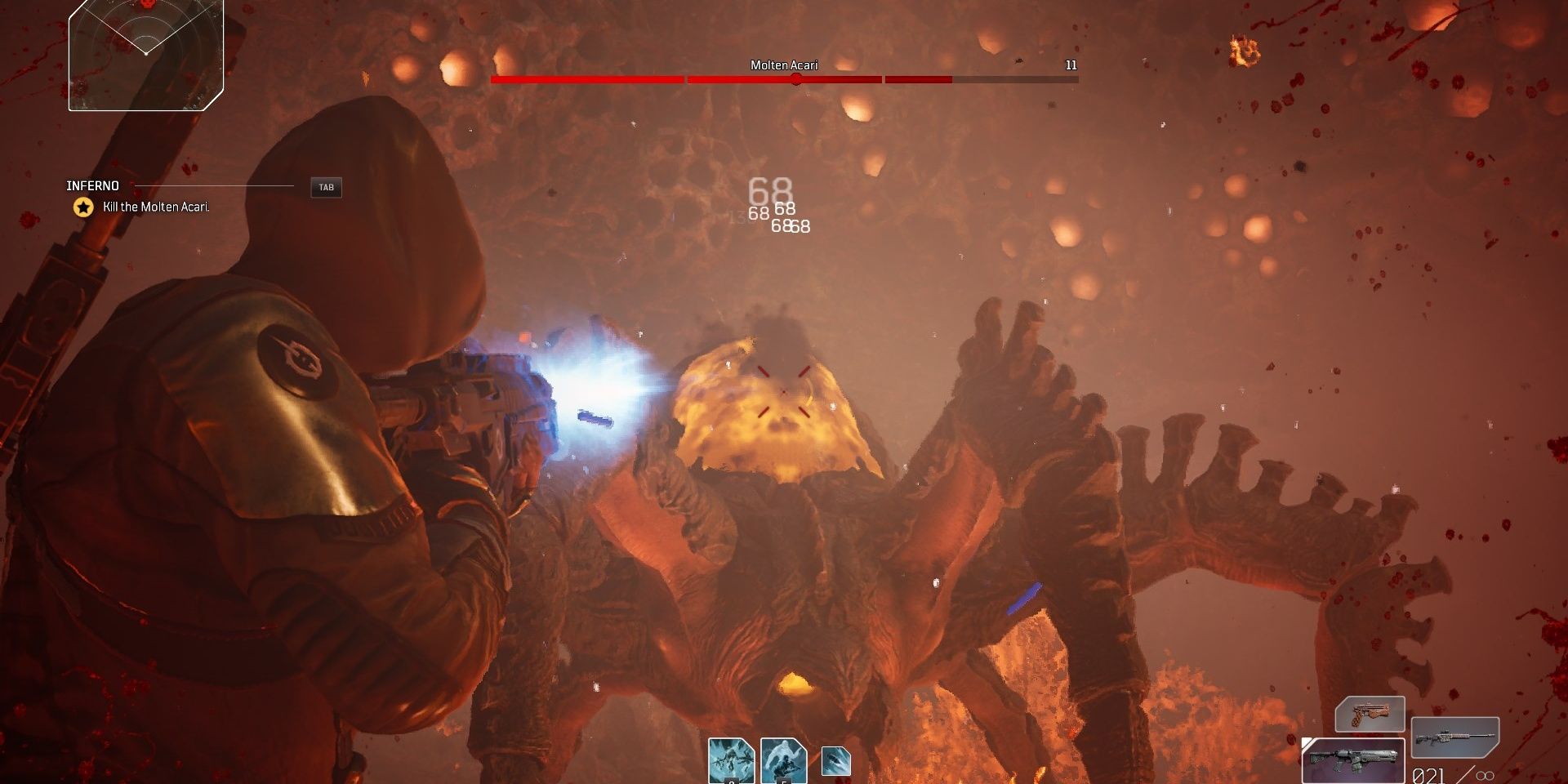 To weaken the spider, shoot at its upper abdomen when it’s facing towards you (the egg-shaped part of its body). A few bullets will reveal a molten core that takes significantly more damage from your weapons. Focus on shooting the spider here whenever you can. 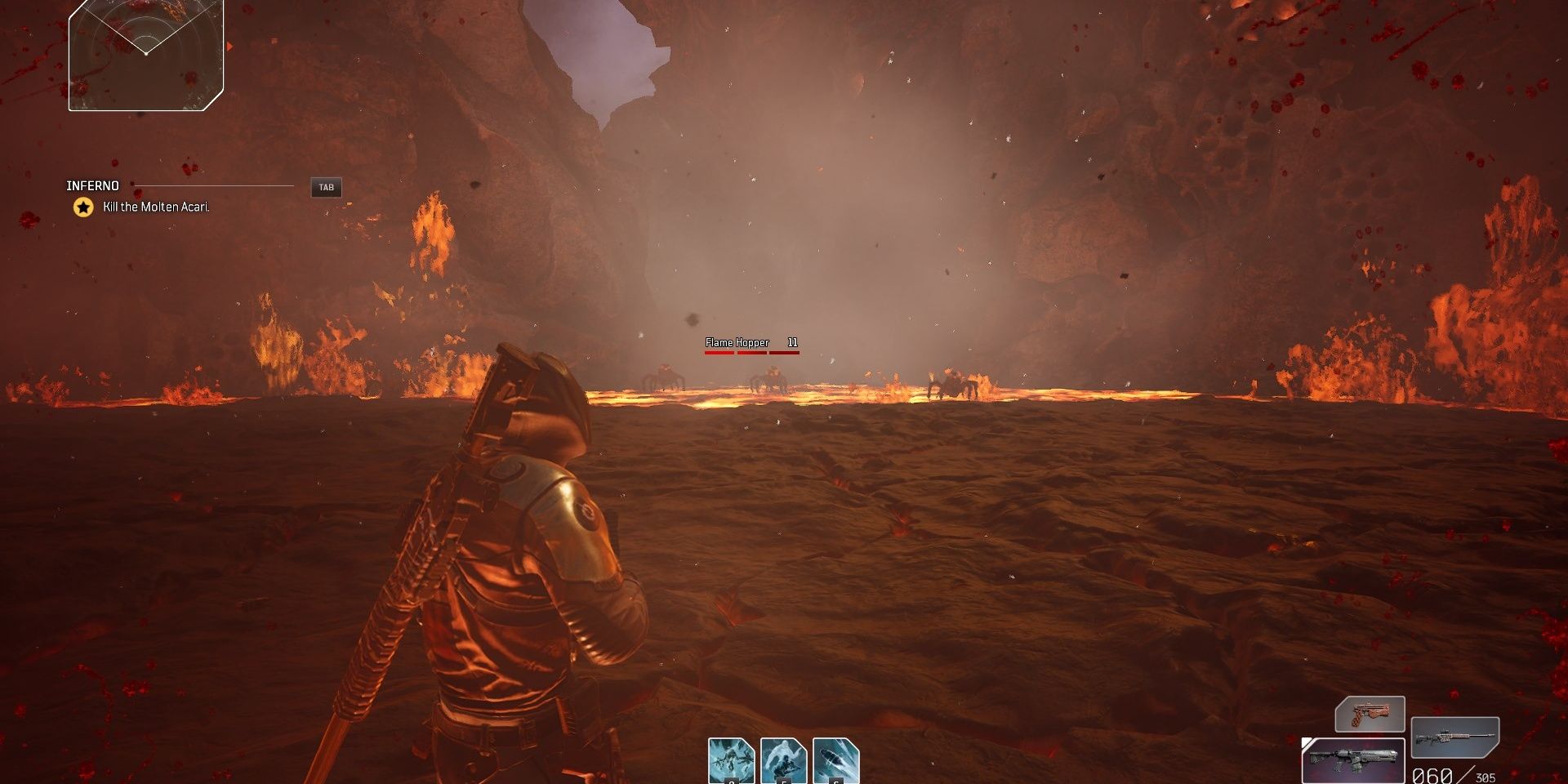 When you take out the first third of its HP, the spider will run into the lava at the end of the arena. Fire Warrior spiders will rise in the Acari’s place, acting as tougher Hatchlings. Use this as an opportunity to get your health back. 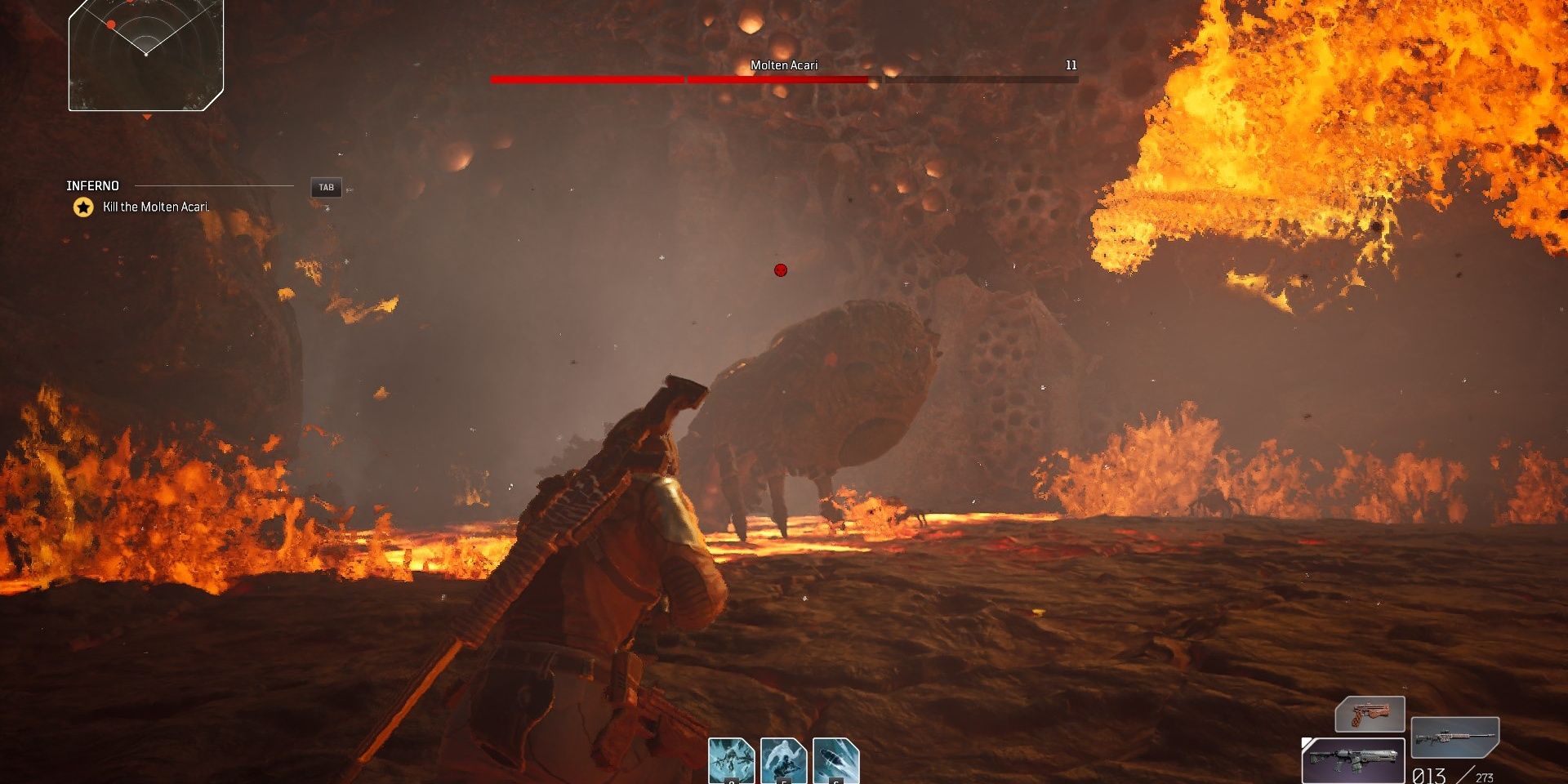 Defeating the Fire Warriors will cause the Molten Acari to rise, this time taking a more supportive role. Instead of charging you head-on, it’ll instead release streams of fire in a wide cone across the arena. You’ll want to either stay away from the boss or dodge through the stream of fire when it gets near you. Fire Warriors will spawn throughout this phase, so use them as mobile health packs whenever you take damage. 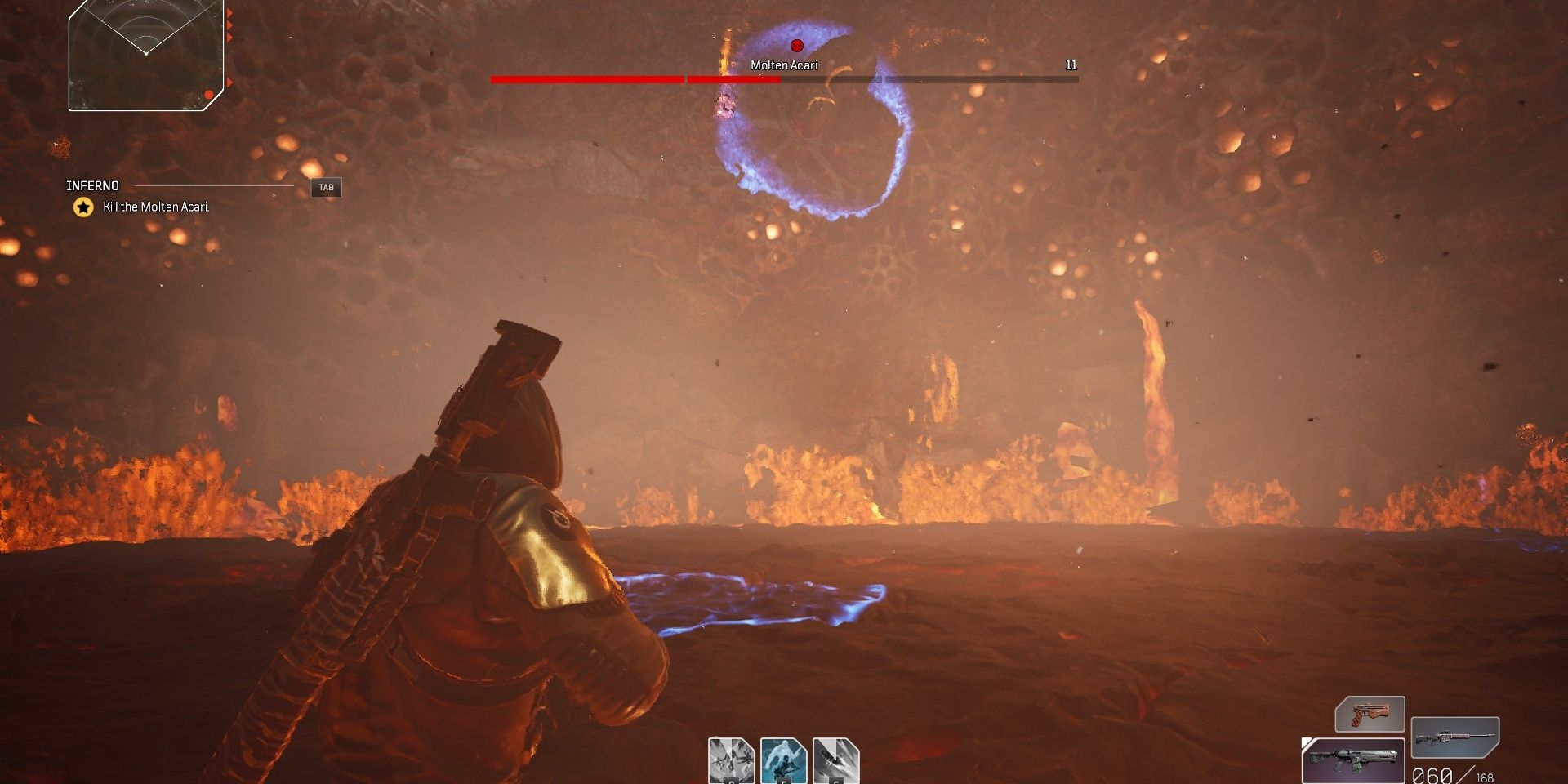 Damaging the spider boss will cause it to run up the walls of the volcano, firing molten projectiles onto the ground. Use whatever weapons you have to damage the boss during this part. If you’re low on ammo, kill the Fire Warriors. Reveal the spider’s weakpoint whenever you can to maximize your damage output. 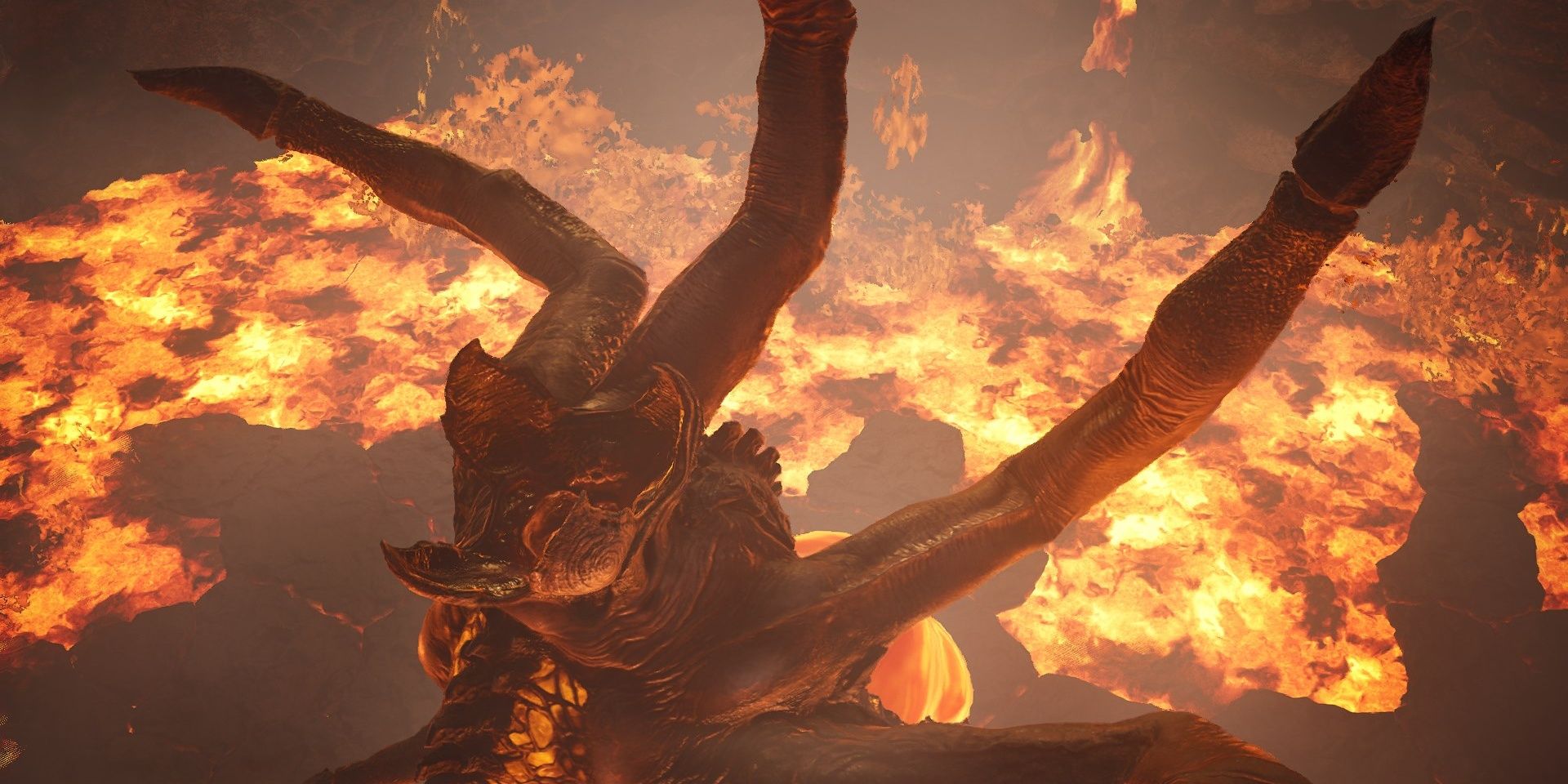 In a desperate attempt to kill you, the spider dives into the lava once more and morphs into… a magma worm? Don’t question the logic. 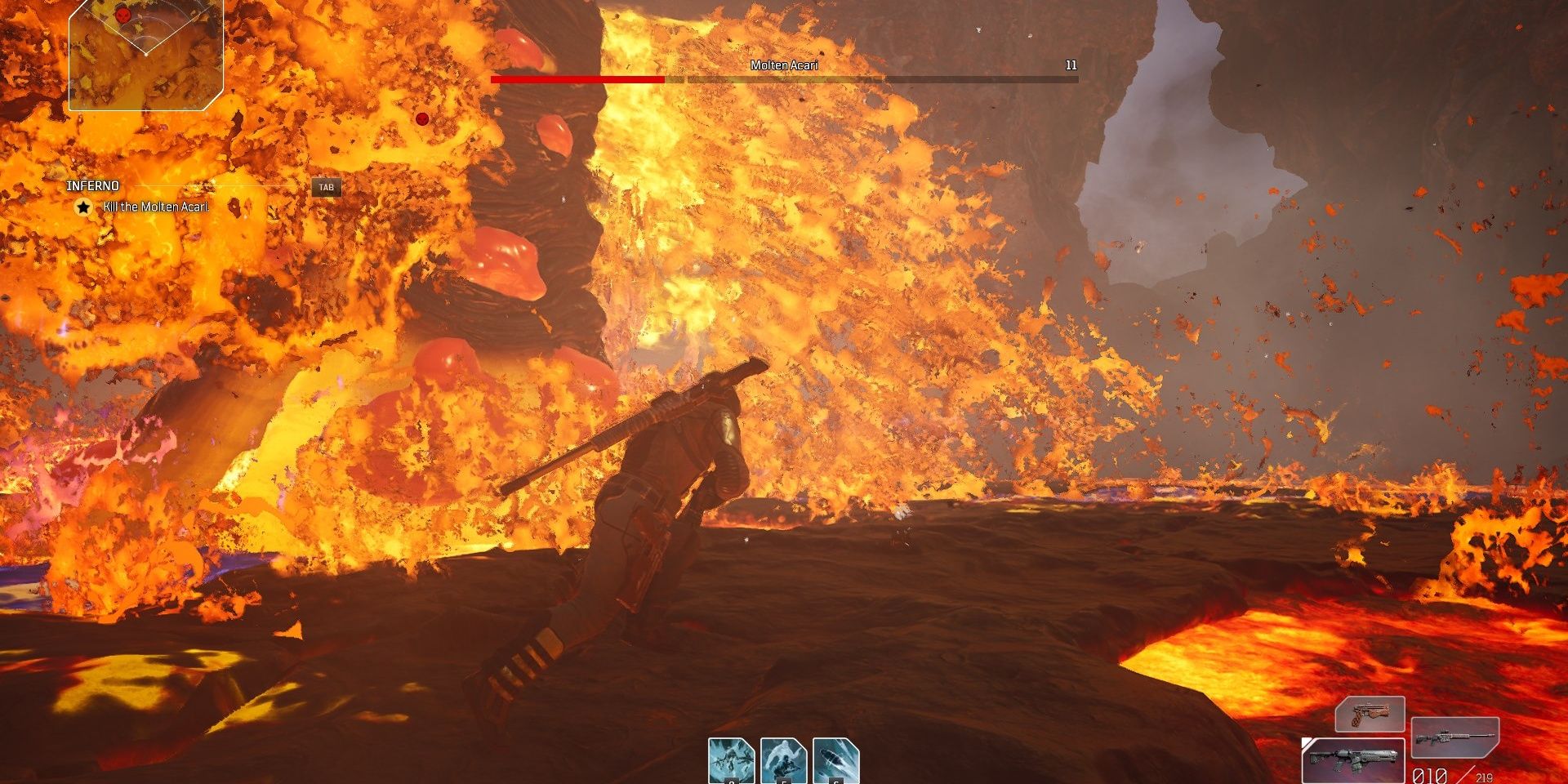 Similar to the second phase, the boss takes a more supportive role in this phase. Four sections of the boss will spew streams of flame every so often, forcing you to move and shoot with a quarter of the arena space. It’ll also fire projectiles that’ll cover the ground in AoE telegraphs. It’s best to sprint out of the way when this happens.

Fire Warriors also spawn during this phase to apply further pressure, although they serve more as health packs for when you mess up.

Use your weapons and abilities to damage the Molten Acari. It doesn’t have a weakpoint during this stage, so damaging any part of its body will work. 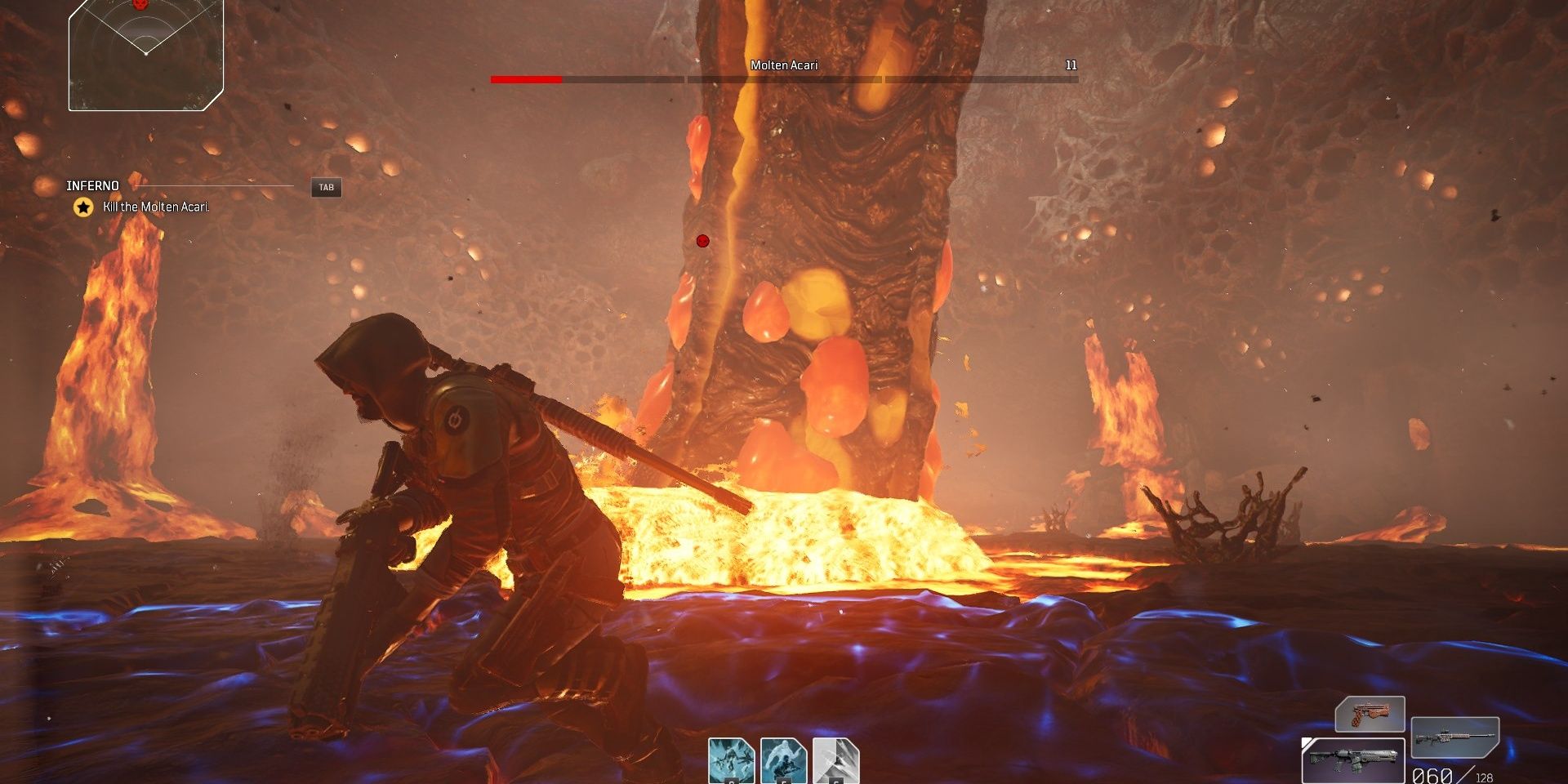 Additionally, the boss can sometimes slam its head into the ground, dealing heavy damage if you’re caught in the AoE. Try to roll out of the way when this happens. Lava can also spew into the arena from time to time, forcing you to reposition on the fly.

Overall, this phase is best beaten by dealing as much damage to the boss as possible. The longer it stays alive, the more AoE attacks you’ll need to juggle. Fortunately, the boss takes more damage in this phase than the first two. Unload your abilities and weapons into this boss to take it down.

Report Back To Captain Dunham 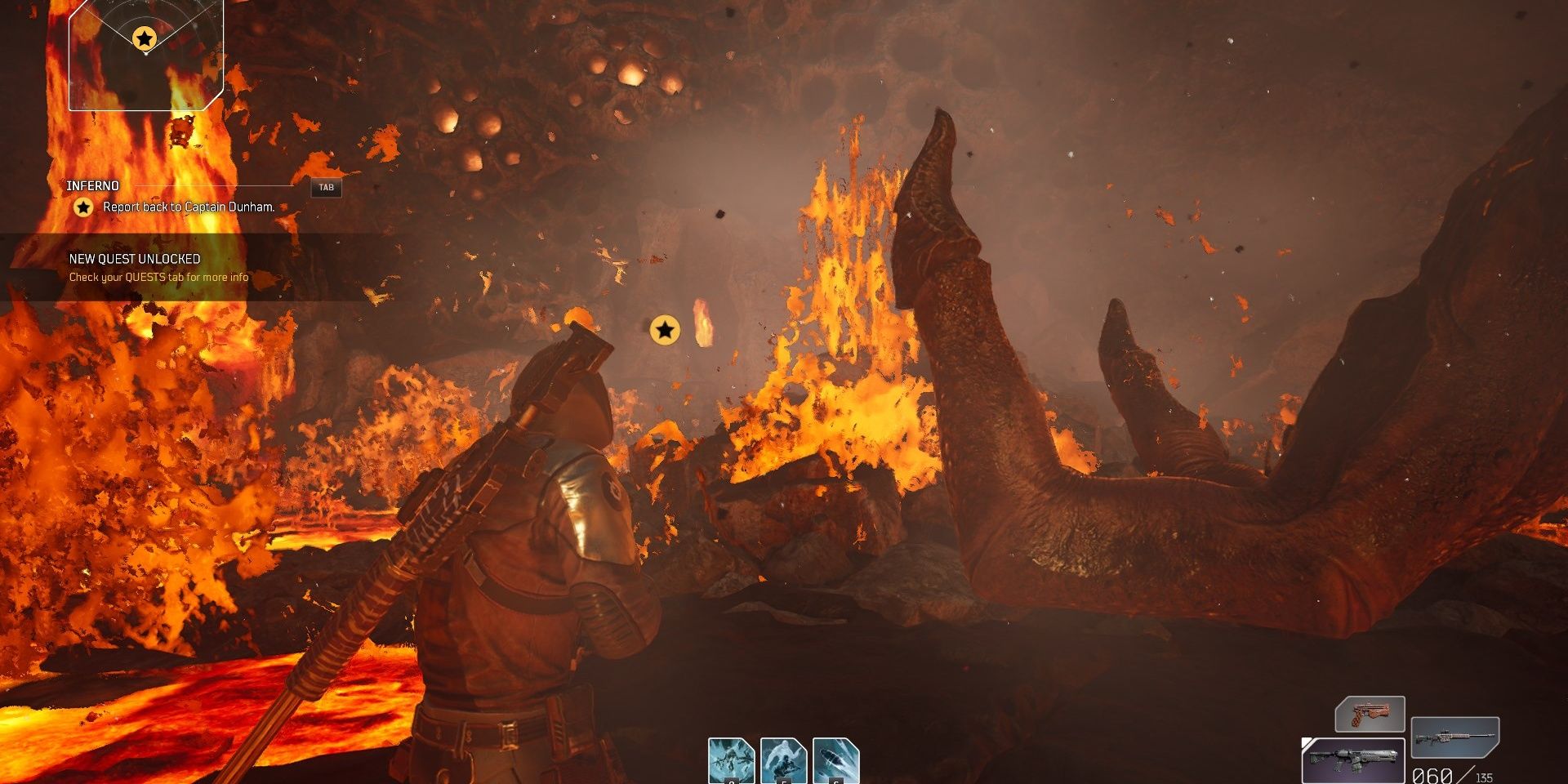 Before you leave the volcano, be sure you loot the Acari’s corpse. It drops some high-quality gear and a solid amount of Titanium on higher World Tiers. Run to the head of the Acari’s corpse when you’re ready to leave. 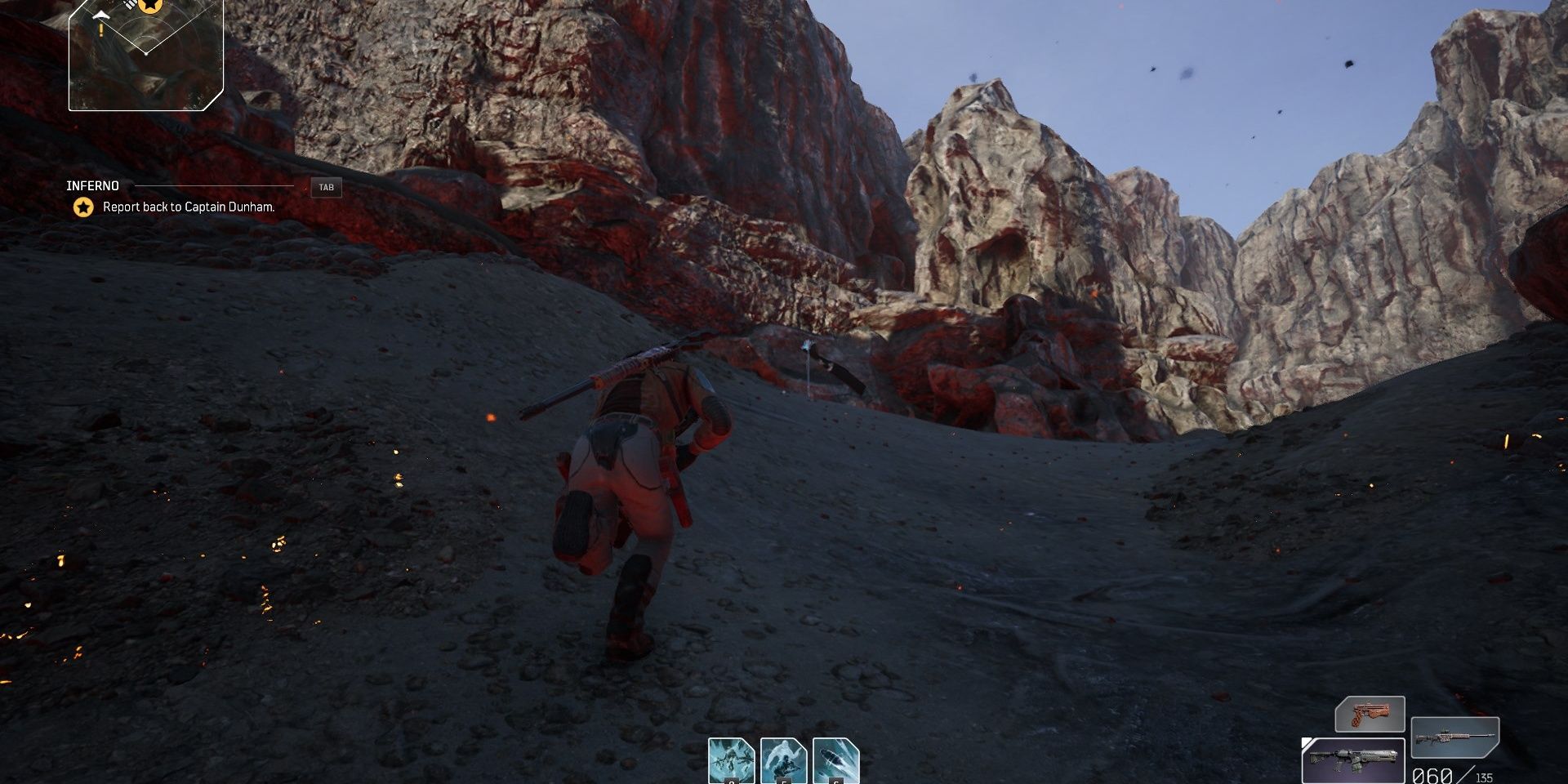 You’ll be teleported right next to the last fast travel flag you planted. Use the flag to travel to the camp. 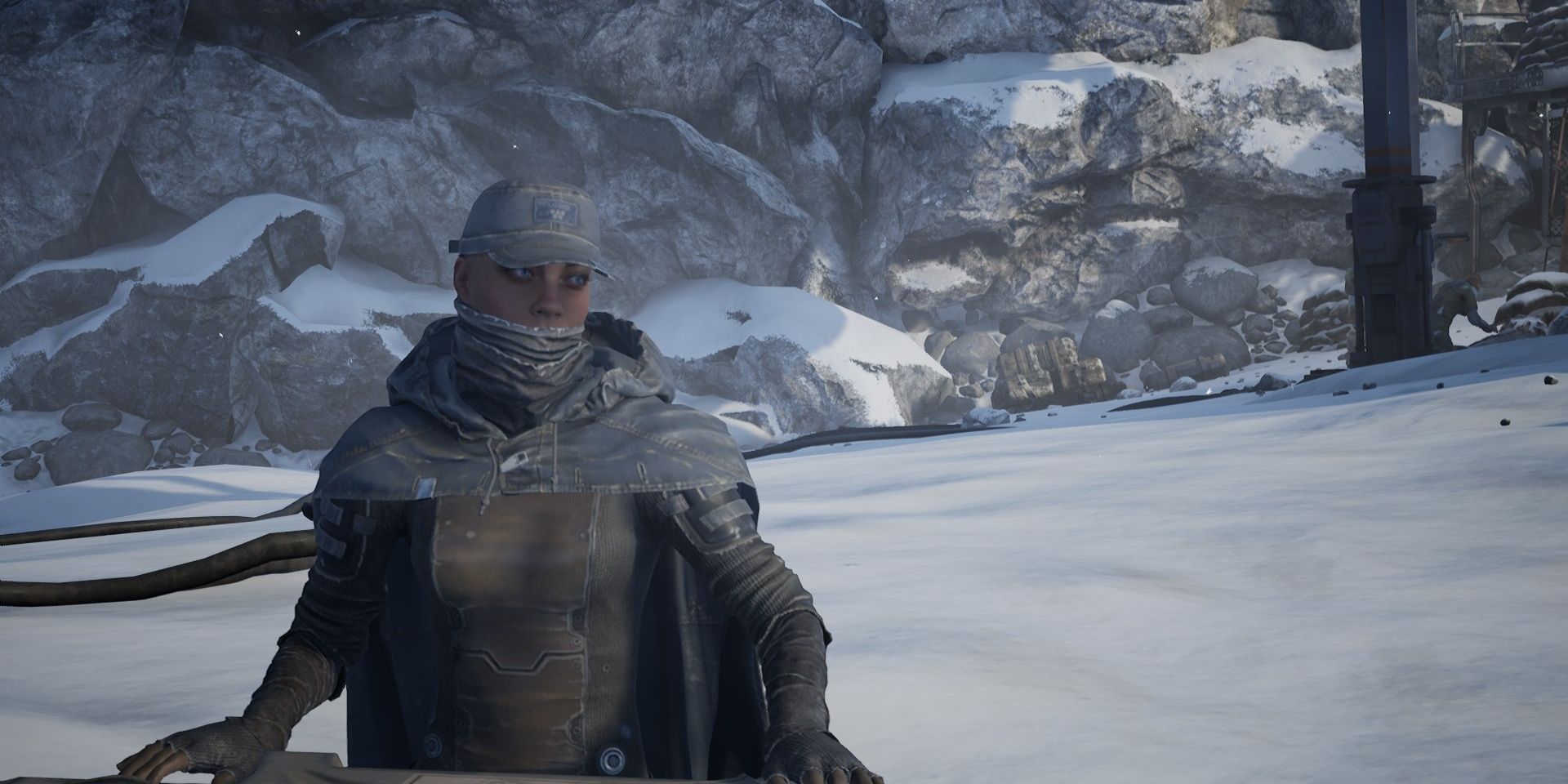 At camp, speak to Captain Dunham to let her know that the volcano problem has been dealt with. You might have just slain a massive molten spider, but it isn’t enough to let you use the cable car to the radio tower. Insurgents have dug themselves into the tower, making it unsafe for Dr. Zahedi. You’ll need to head to the tower and take the Insurgents out, something you’ll do in the next quest: Frequency.