Octopath Traveler: How To Unlock The Post-Game Dungeon

You just finished Octopath Traveler, and want to know if there is more post-game content. Well, you’re in luck! After completing all 8 main stories you will have the opportunity to unlock and beat an additional dungeon. This guide is meant for those who have completed the main story, so there will be spoilers.

Before we go into how to unlock the dungeon, let’s talk about the Gods. There are four secret classes in Octopath Traveler that can be unlocked by defeating a God at their respective shrine. These aren’t necessary to beat the game, but the classes are pretty good. The Shrines are like mini-dungeons, but they are not the post-game dungeon. 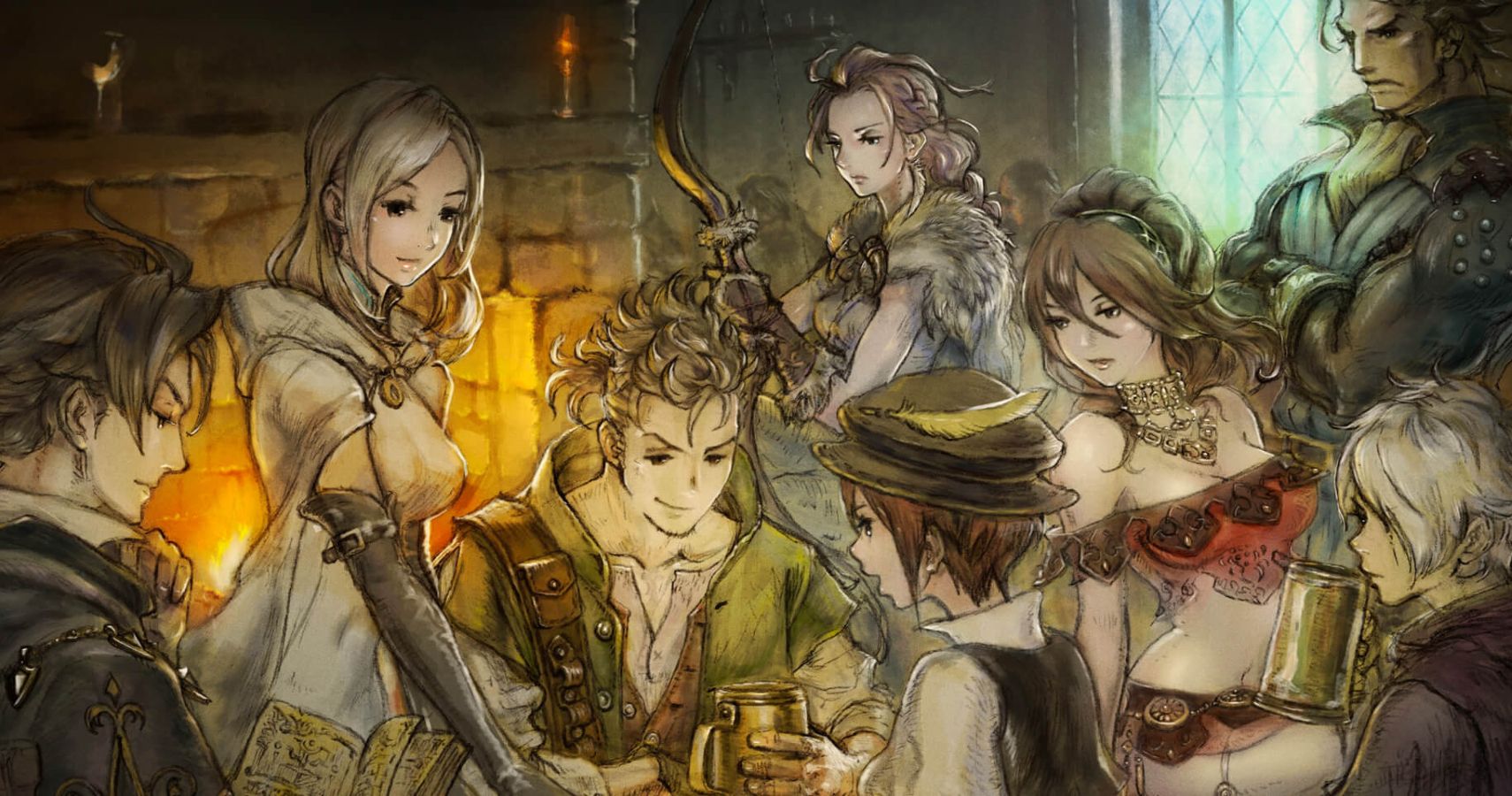 Although it’s fairly obvious, you need to beat the story for all 8 characters. Completing the stories is fairly straightforward, but the path to the post-game dungeon will not unlock unless you do this. 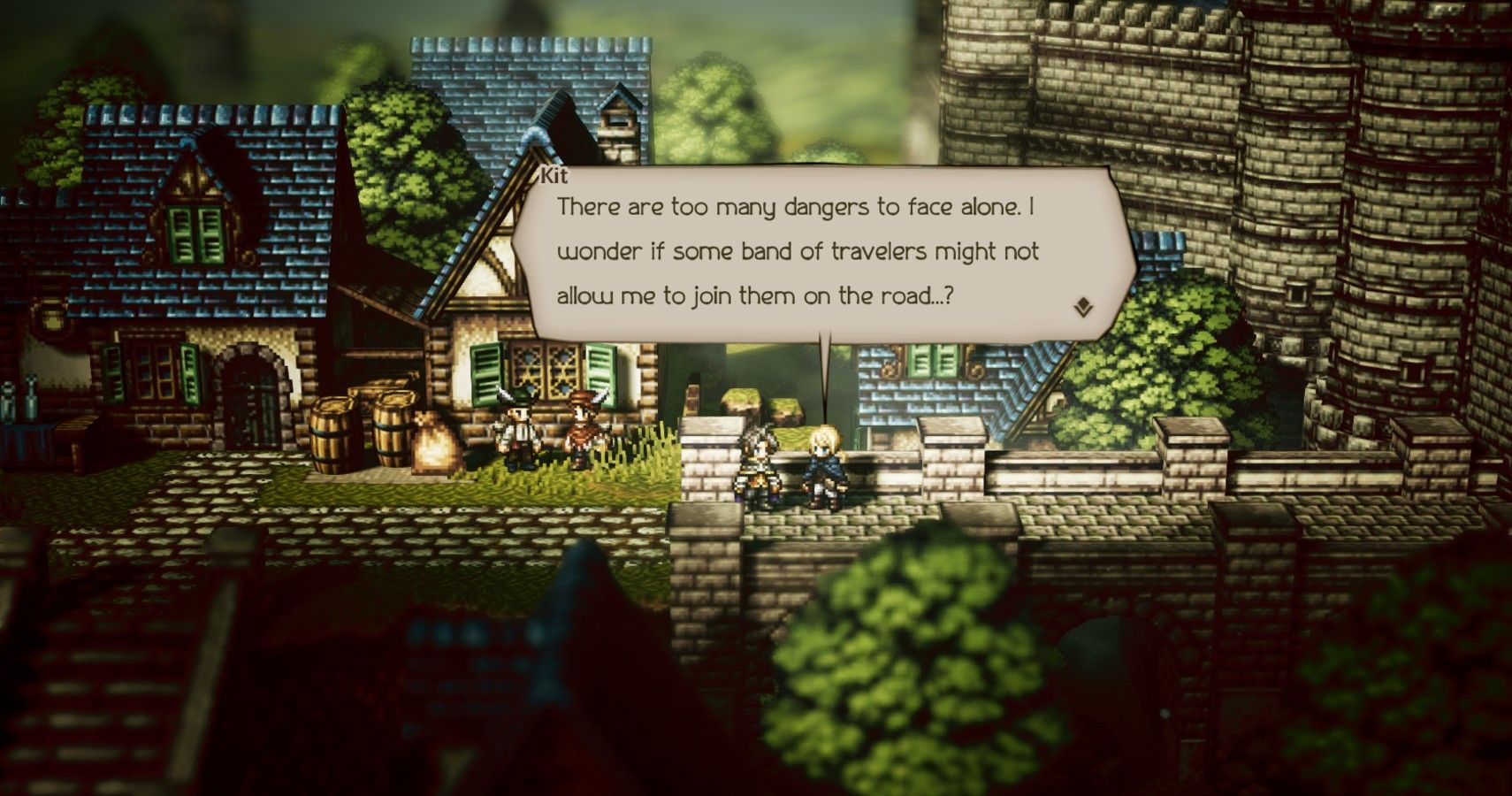 In addition to beating the main story, you will also need to complete 4 additional side-quests. Let’s quickly go through the side-quests, and where to find them.

This is the very first side-quest for the entire game, and fairly easy to complete. Kit will appear outside of the town for whichever traveler you chose first. All you have to do is give him a Healing Grape and the quest is complete.

In Search of Father (parts I and II)

Daughter of the Dark God (part I and II)

For part one, you will head to Ravus Manor in Bolderfall and defeat Alphas. After defeating him, speak to Lyblac on the bridge to the west of Saintsbridge. The second part of this quest will require you to Inquire/Scrutinize Alphas about his poem, and then return to the Saintsbridge Cathedral and speak to Flora.

Alphas and the Impresario

Head over to the Impresario on the West S’warkii Trail and help defeat the Azure-eyed Tiger. 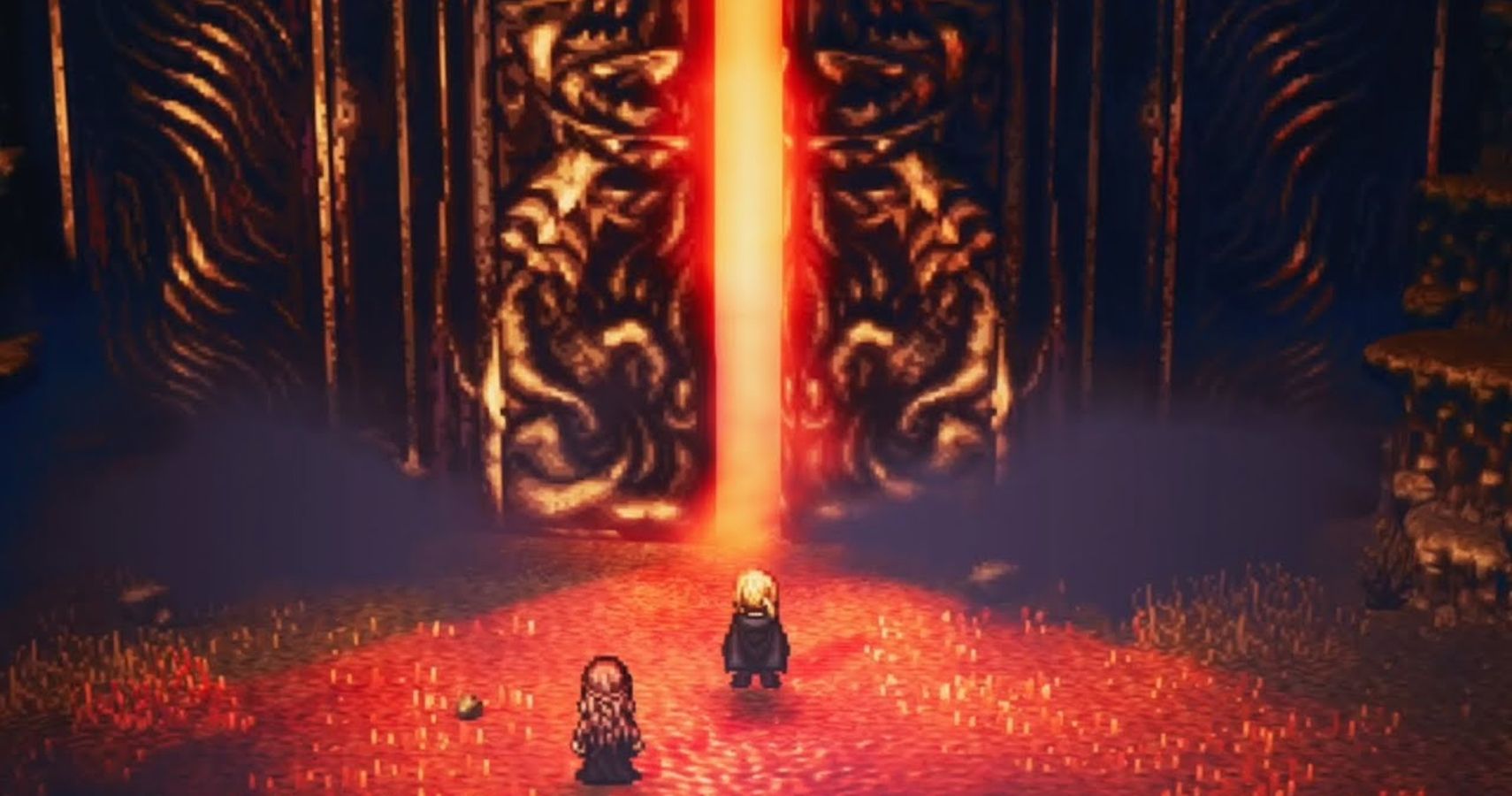 After completing the above side-quests, you will unlock At Journey’s End. After defeating the Azure-eyed Tiger, speak to the Impresario again, and you will unlock access to the Ruins of Hornburg, where the post-game dungeon is. You will be able to fast travel here, where Kit and Alphas will be waiting.

From here, follow Kit and Alphas through The Gate of Finis. Inside you will defeat a series of bosses, leading up to the final boss, Galdera. 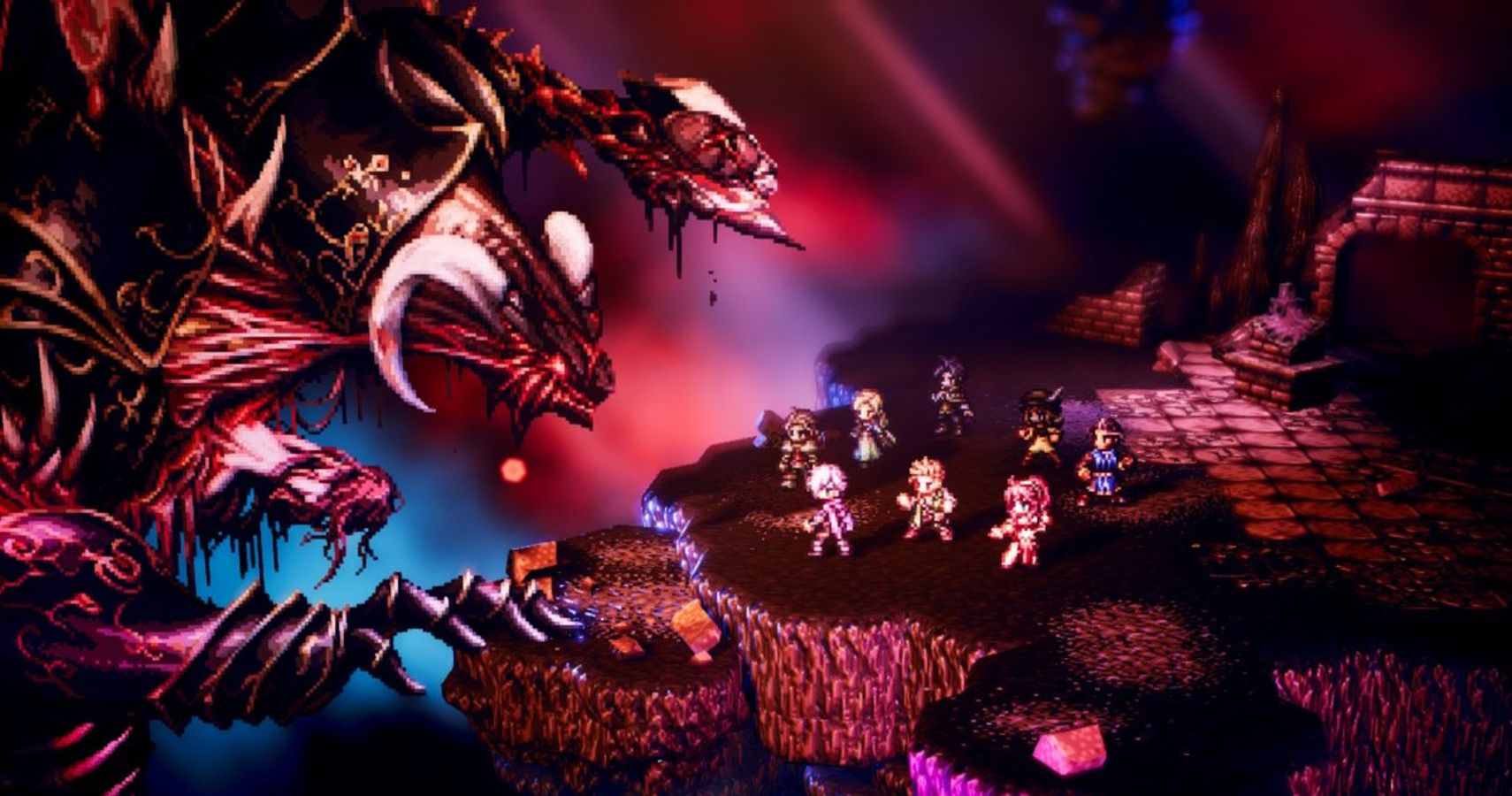 The post-game dungeon is hard. There is no way around the difficulty, as you must defeat eight bosses before reaching Galdera, one of the Gods that created Orsterra. The bosses are basically shadow versions of previous bosses for each traveler’s story.

Try to have all of your party members above level 60. You will not be able to leave The Gate of Finis once you are inside, and there are no save points. Because of this, you should only enter if you are completely prepared.  If you die to Galdera, you will have to battle all eight bosses again. However, if you are finding the bosses difficult, you are not ready to defeat Galdera.

You can get through the game using only four characters. But for this final dungeon, you will need to use every party member. Make sure that they are powerful enough to battle Galdera. Bring plenty of healing items and make sure your party has good equipment. 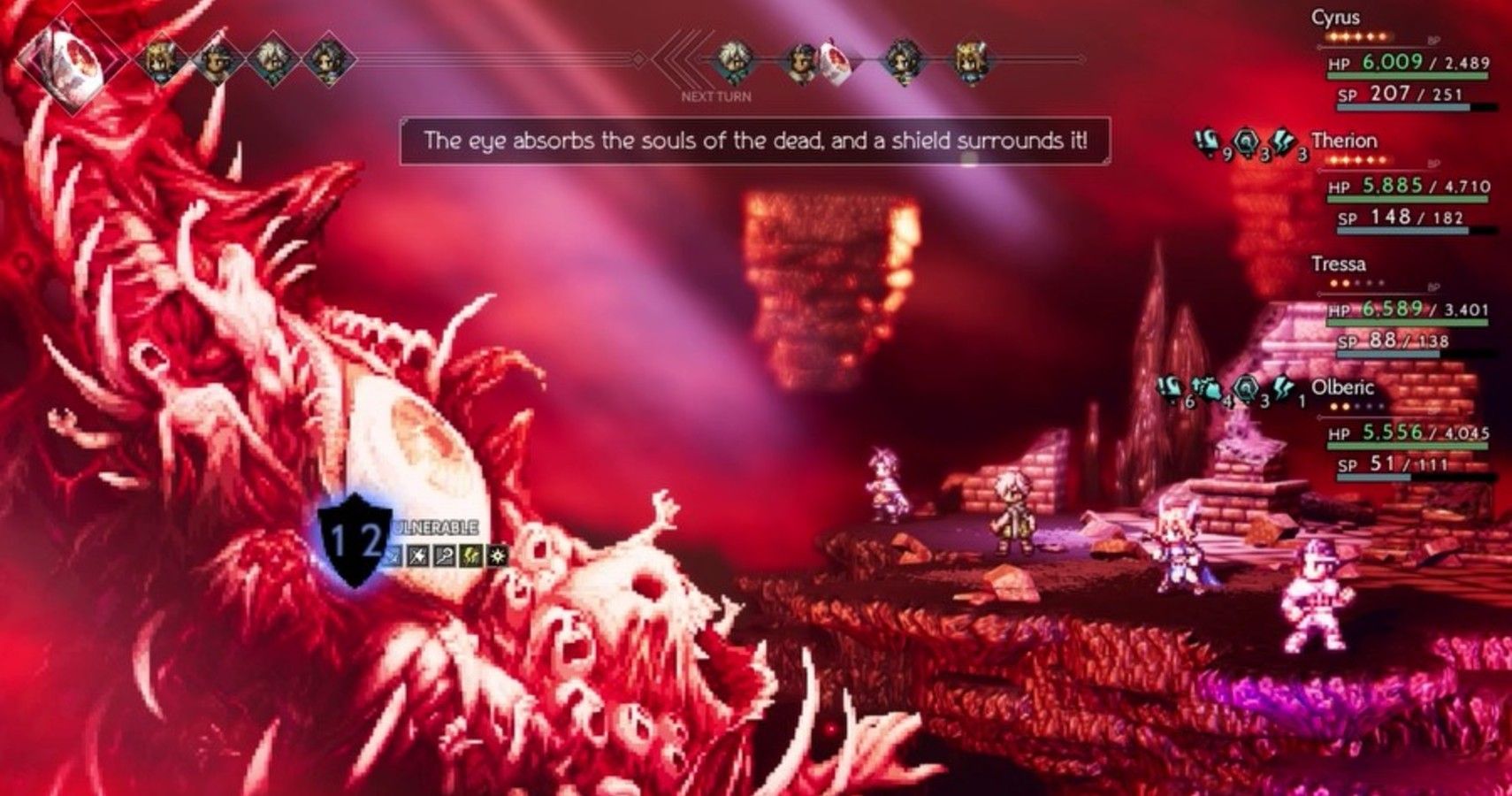 Galdera has two phases and a hefty amount of HP. For the first phase, prioritize dealing heavy elemental damage. Galdera will summon three souls that respawn if they aren’t defeated within a turn of each other. You will need to focus on killing these souls so you can deal damage to Galdera.

When the second phase begins, prioritize elemental defense. Immediately after the battle begins, Galdera will cast Veil of Darkness, which basically makes him invincible as long as his extremities are alive. You should focus on killing these quickly, so you can begin to do damage to Galdera. The second phase Galdera has less HP. However, it will taker longer to defeat him.

if you’re still having trouble defeating Galdera, consult the fandom wiki or other walkthroughs for a more detailed breakdown of the fight.

Once you have defeated Galdera, you have finished the final dungeon. All eight travelers will appear on the screen, standing in a circle shape, respective to their regions in Orsterra. The positions of the travelers will also spell out ‘octopath.’ This is the true final boss of Octopath Traveler. After completion, you have now beaten the game.