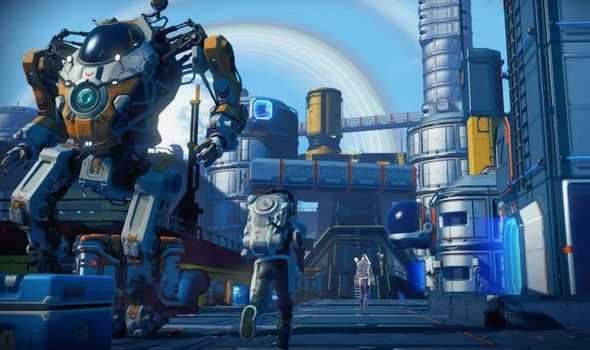 No Man’s Sky has been officially announced for the PS5 and Xbox Series X next-gen consoles.

According to developer Hello Games, the mammoth space exploration game will be playable on next-gen consoles at launch.

It’s all possible with the newly released 3.10 update, which adds next-gen support, enhanced visuals, and 32 person multiplayer. The full list of 3.10 patch notes can be seen further down the page.

Best of all, the next-gen update is completely free, which means existing players can transfer their games over to PS5 and Xbox Series X at no cost.

The PS5 version of No Man’s Sky will feature haptic controls, as well as 4K/60 frames-per-second gameplay, cross-gen multiplayer and improved audio.

“Planet surfaces are even more detailed, with thousands more rocks, alien grasses, and exotic flora on screen at any time.

• Save games can be transferred from previous console generations to their next-generation equivalent.

• PSVR owners can continue to experience No Man’s Sky in Virtual Reality on PlayStation 5 via the backward compatibility functionality.

• PlayStation 5 users can use the Activities feature to track and manage their Journey Milestones.

• PlayStation 5 users now experience feedback directly through the triggers of their pad.

• Rendering quality has been significantly increased for next-generation consoles.

• Base complexity rendering limits have been removed for next-generation consoles.

• For next-generation consoles and PCs running on “Ultra” settings, the distance at which detailed grass, plants, rocks, and other objects are shown has increased.

• For next-generation consoles and PCs running on “Ultra” settings, the density of terrain details such as foliage, fungi, and rocks has been increased.

• Texture and geometric detail on a large number of objects such as foliage, fungi, and rocks have been significantly increased.

• Improved the visual effect of grass being pushed aside when walking through it.

• Fixed an issue that caused the water horizon to appear bumpy.

• Fixed an issue that could occasionally cause the grass to fail to render.

• Fixed an issue that caused butterfly bellies to be unintentionally always white.

• Fixed an issue that caused planetary lighting to change after opening and closing Photo Mode.

• Fixed an issue that could cause foliage to disappear when moving the camera in Photo Mode.

• Refreshed the set of community images on the Mode Select screen.

• Updated the style of the hazard protection icons on the HUD.

• Updated the style of the icons displayed by mission notifications and markers.

• Fixed a number of rendering-related crashes on PS4.

• Fixed an issue that could cause very large saves to fail to load on PC.

• Optimized terrain generation on Xbox One.

• Introduced a significant number of performance optimizations for all platforms.

• Improved the feel of space combat. Target locking has been improved, and enemy ships are now more visible with cleaner UI.

• The camera shake caused by gassy hazardous flora has been reduced.

• The camera shake when shooting nearby objects has been reduced.

• Hover text has been added to banner emblems in the Appearance Customizer.

• On PS4 and Xbox One, when adding a No Man’s Sky friend who is playing on on the same platform, players are now also presented with the option to add them as a PSN or Xbox friend.

• Fixed a rare blocker where some players on older saves would be unable to progress in the Atlas Path.

• Fixed some rare cases where multiplayer sessions could fail to resume correctly after suspending the game on Xbox One.

• Fixed an issue that could cause a blank Galactic Map when joining a multiplayer game while the host was mid-warp.

• Fixed an issue where NPC pilots landing on planets could disappear for some players in a multiplayer game.

• Fixed an issue that could cause players to load into the wrong system when joining a multiplayer game while the host was on the other side of a portal.

• Fixed an issue that could prevent players from redeeming the pre-order bonus if it was installed while the game was running in the background.

• Improved the alignment of the camera when interacting with damaged containers.

• Fixed an issue that could cause ships docking in a Space Station to have an incorrect collision.

• Improved the collision of doors on bases, making them easier to walk through.

• Fixed an issue that prevented base decals from being deletable after placement.

• Fixed an issue that could cause multiple mission notifications to display simultaneously and overlap.

• Fixed a rare case where the tutorial notifications would constantly flicker when starting a new game.

• Fixed a rare issue that could cause inactive missions to progress when using the Multi-Tool Scanner.

• Fixed a number of incorrect text responses in NPC interactions.