While Neon White has never been bashful about introducing potent new tools into the game, the eighth mission gives you a soul card that absolutely trumps every weapon that came before it: the rocket launcher. It feels like the assault rifle's discard ability was a pair of training wheels just prepping you for this moment. With the rocket launcher, your standard shot is able to propel you across the stage in a similar manner to the assault rifle's discard bombs. Long live the rocket jump!

Naturally, given how potent the rocket launcher is, and how versatile it makes your mobility, the game opens up in a way that it simply hadn't been open before. We will be pointing you in the direction of the major shortcuts outlined by the game's hint system. However, we wouldn't be surprised if people broke these levels wide open using the rocket launcher. It is a potent traversal tool indeed. 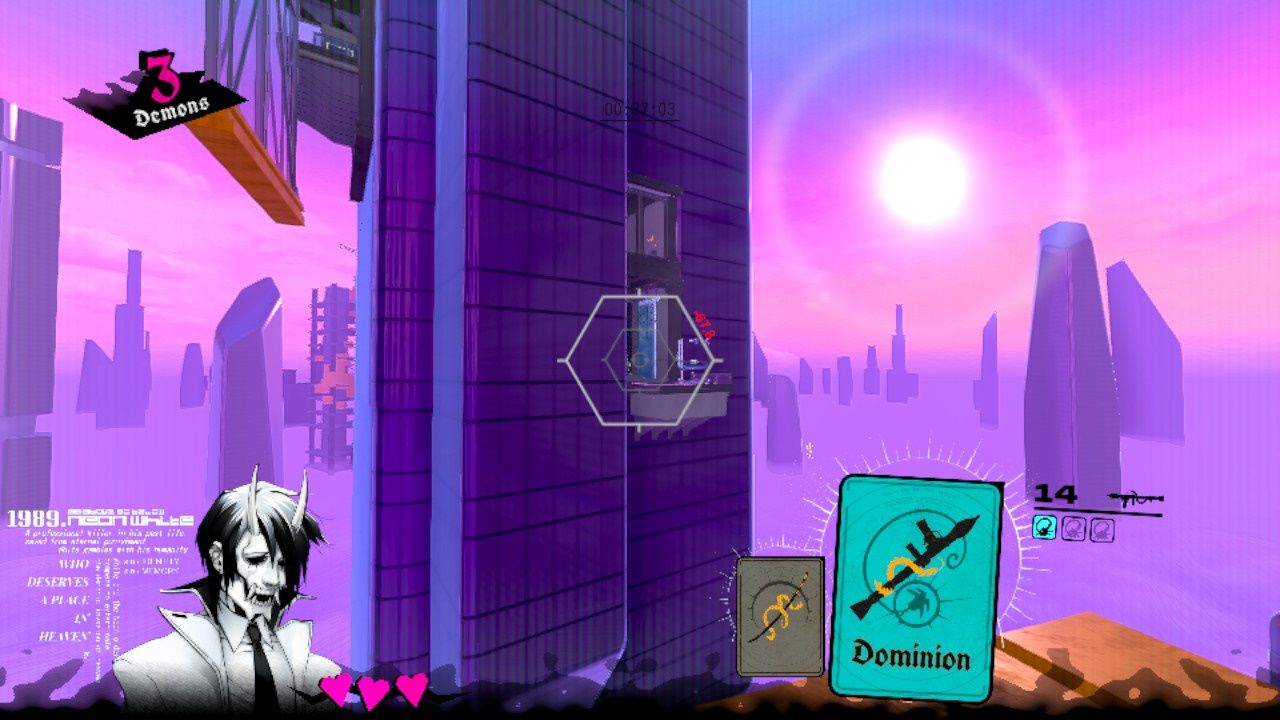 The primary thing to be aware of in this stage is that there are only six enemies. The three ammo demons at the very beginning, and the three demons clustered together at the very end of the stage. So, all you need to do is take out the first three demons, then, if you look to your right, you will see the exit. Fire a rocket into that room to take out the final three enemies. Then Jump toward the exit and use the rocket launcher's discard ability to cross the gap. This is a ginormous skip and essentially cuts off half of the stage. It is huge. 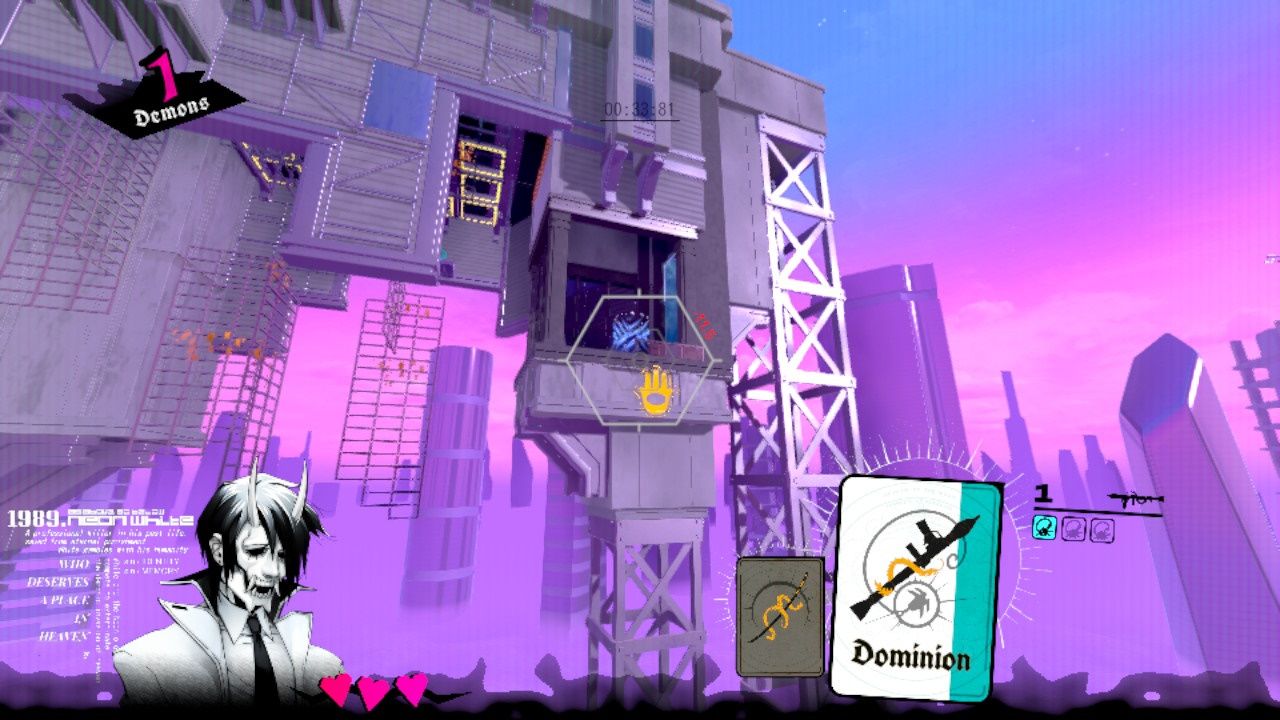 This level has a pretty simple shortcut. Continue the stage as you normally would, ziplining from glass panel to glass panel. Once you encounter the stage's sole demon, which is a balloon demon, zipline to it. Then, after bouncing off of it, look to your right. What you will see is the stage's exit. Zipline over to it and you will finish this level with tons of time to spare. 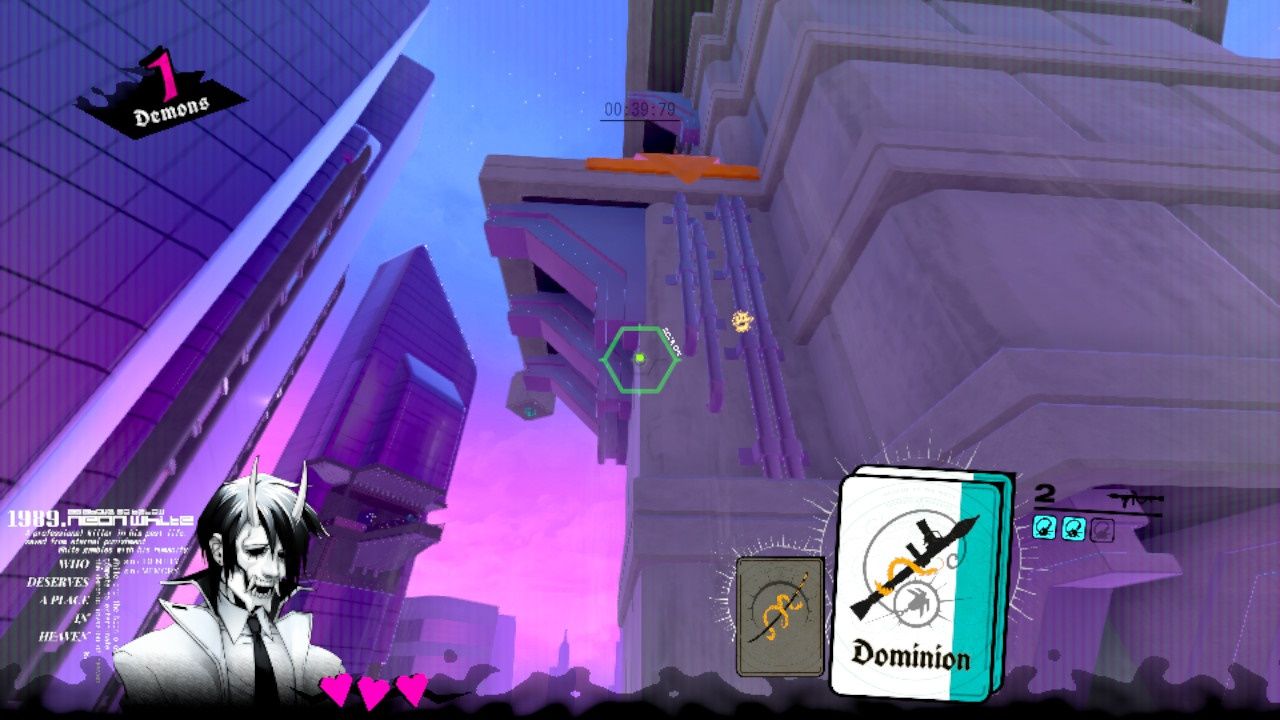 Continue this stage as you normally would. At a certain point, there will be two groups of demon heads sitting on red platforms. Shoot both platforms to take them out. Now, the building that is to the right of the first demonic head-infested platform you encountered (and destroyed) will act as this stage's big shortcut. 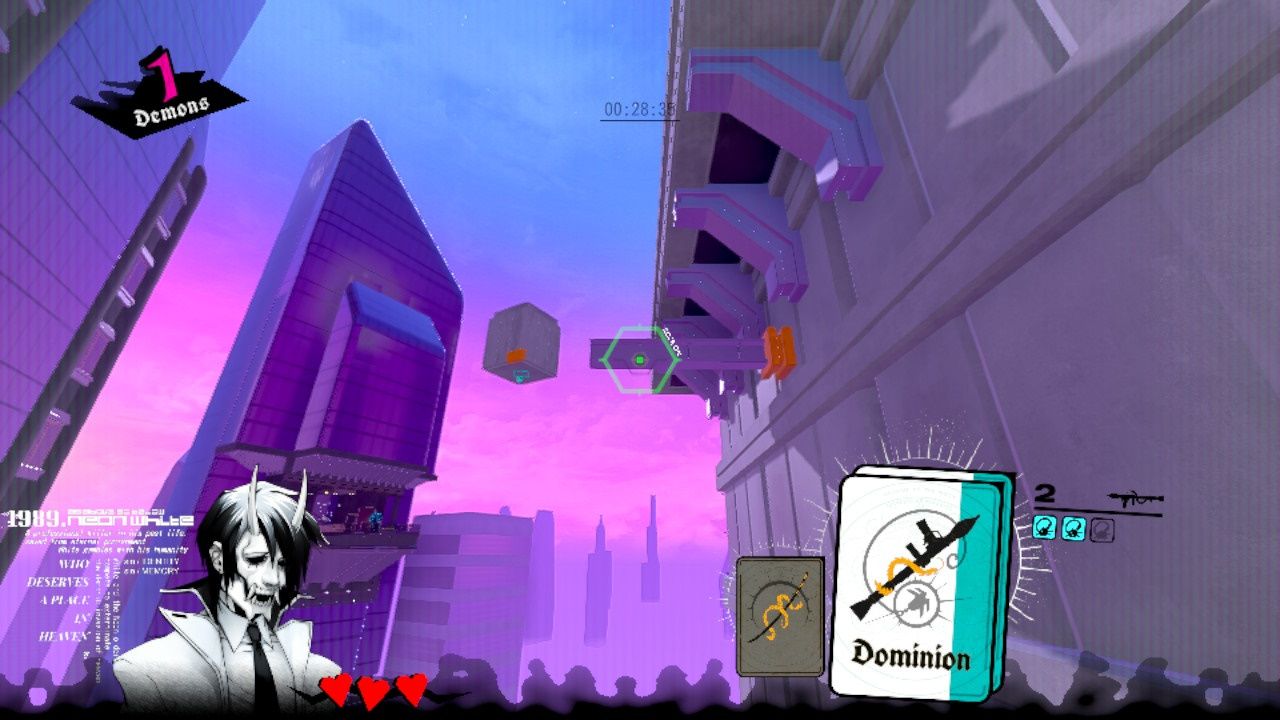 Rocket jump up this building until your reach a section you can walk on. From here, you are going to want to zipline to the beam in the nearish distance, and then to the grapple point on the underside of a floating cube. You will now be at the stage's end. Shoot the demon, zipline to the exit, and claim your platinum medal. 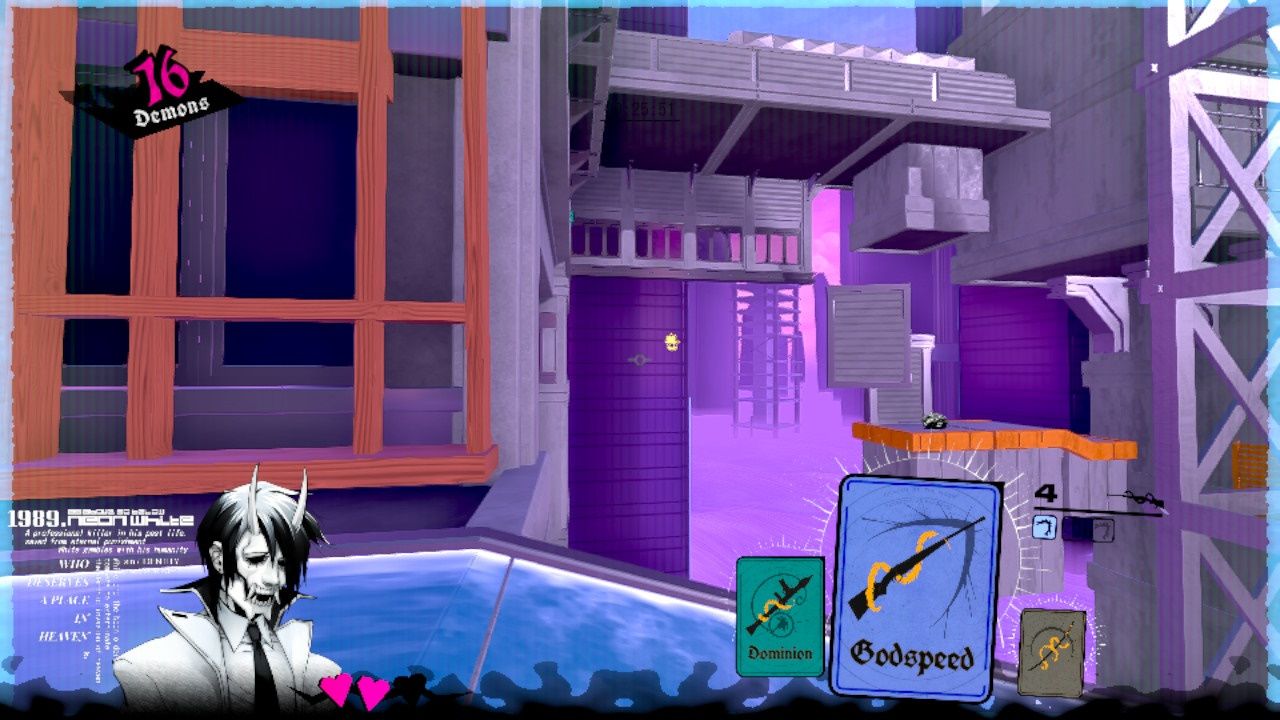 After you slam down onto the demons in the canal and take out the blue demon in the section that follows it, there will be a long stretch of canals that hook around to the left. 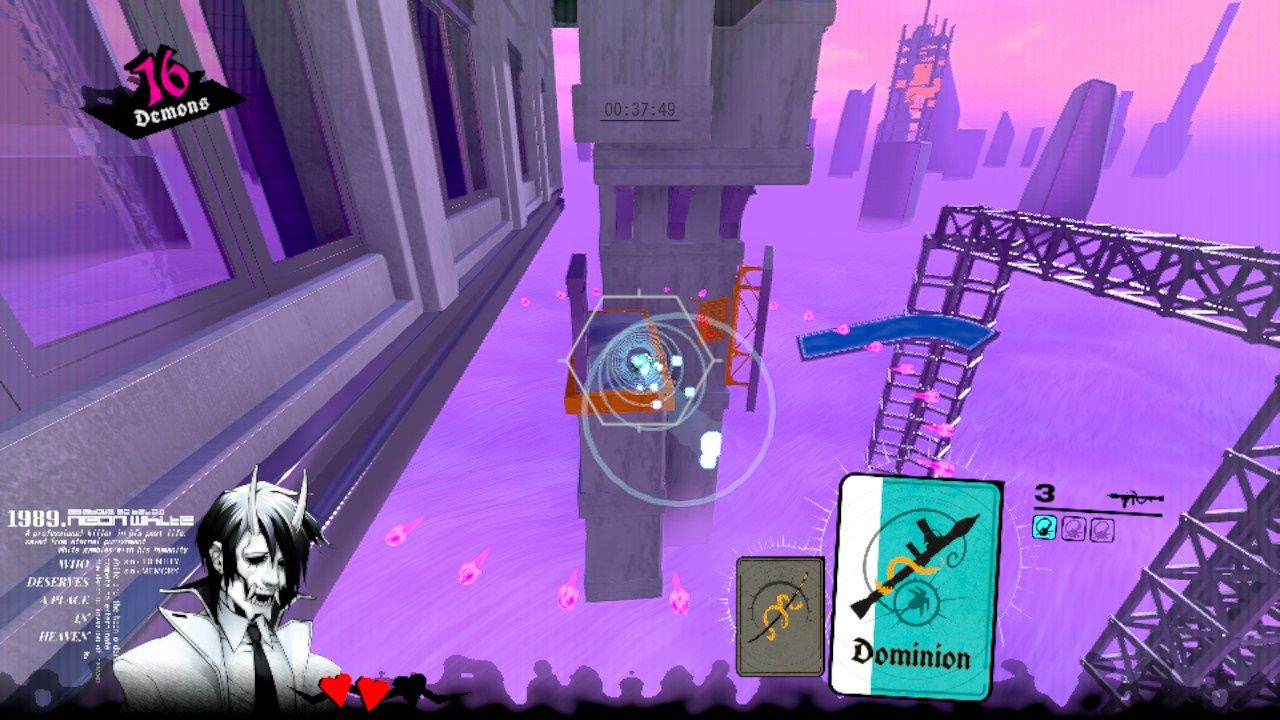 However, instead of following those winding canals, when you enter that area with the canal that hooks to the left, you are simply going to jump to the left, use the discard ability on the sniper rifle, and zipline to the pane of glass in the back corner. Now, before you continue with the stage, make sure to shoot a rocket at the lone demon off in the distance. This is another fairly sizable skip and will help you claim a superior time. 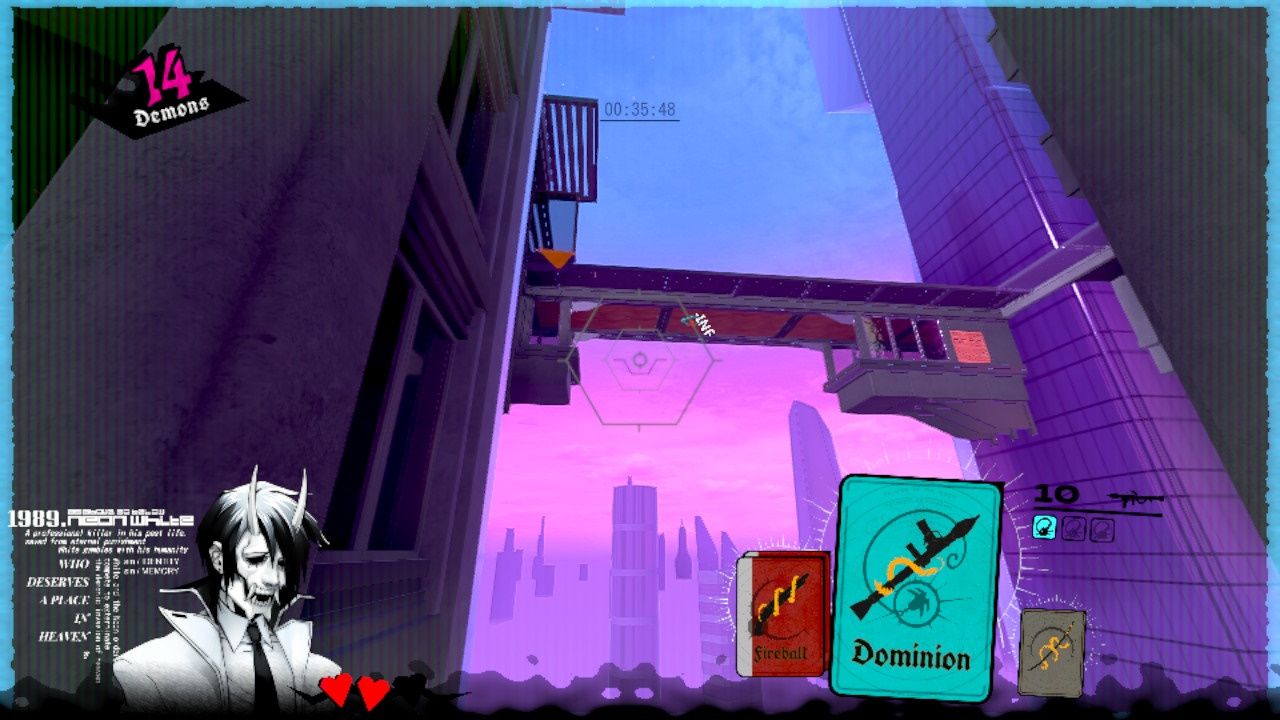 Proceed as you normally would, actively switching between your rocket launcher and shotgun to traverse the stage. However, make sure to actively only use the rocket launcher's zipline when it is absolutely necessary (these moments are unambiguous). Eventually, you will reach a section of this stage where you will follow a canal that hooks around an apartment's balcony.

This will lead to a set of red doors for you to blast through. Ignore those doors. Instead, look to your left. You will see the bridge that leads into the building on the left side of the screen. Jump towards the bridge, discard a shotgun to dash close, then zipline to the lip of the bridge. From here on out, carry on with the rest of the stage as you normally would. Master this shortcut and you will get that platinum. 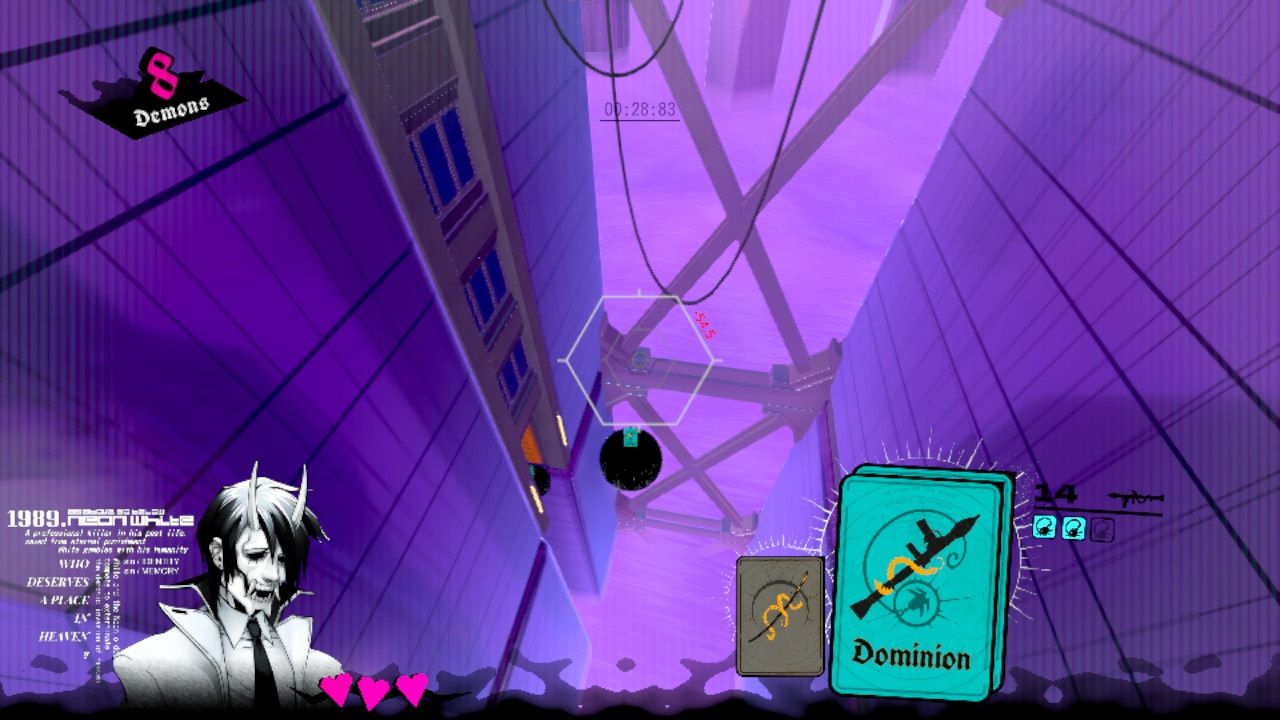 There will be a section where you would typically grapple down toward a series of balloon demons. Then, you would rocket jump your way back up. Pretty inefficient. Instead, you are going to want to grapple down and under into this section until you are in view of all the demons, then you are going to fire rockets at the balloon demons below you, and finally, scale the building using rocket jumps. 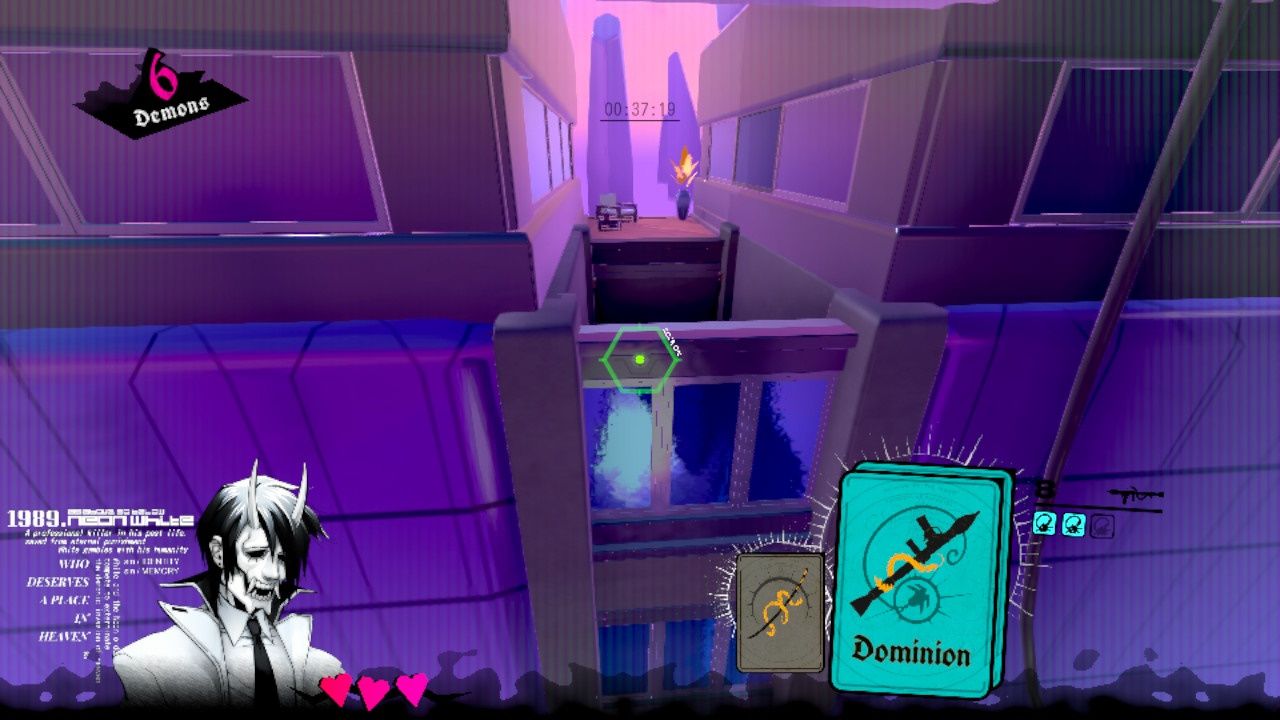 Make sure you are centered with the balloon demons, as the gap up is only in the center section. This skip is more substantial the sharper your shooting is. 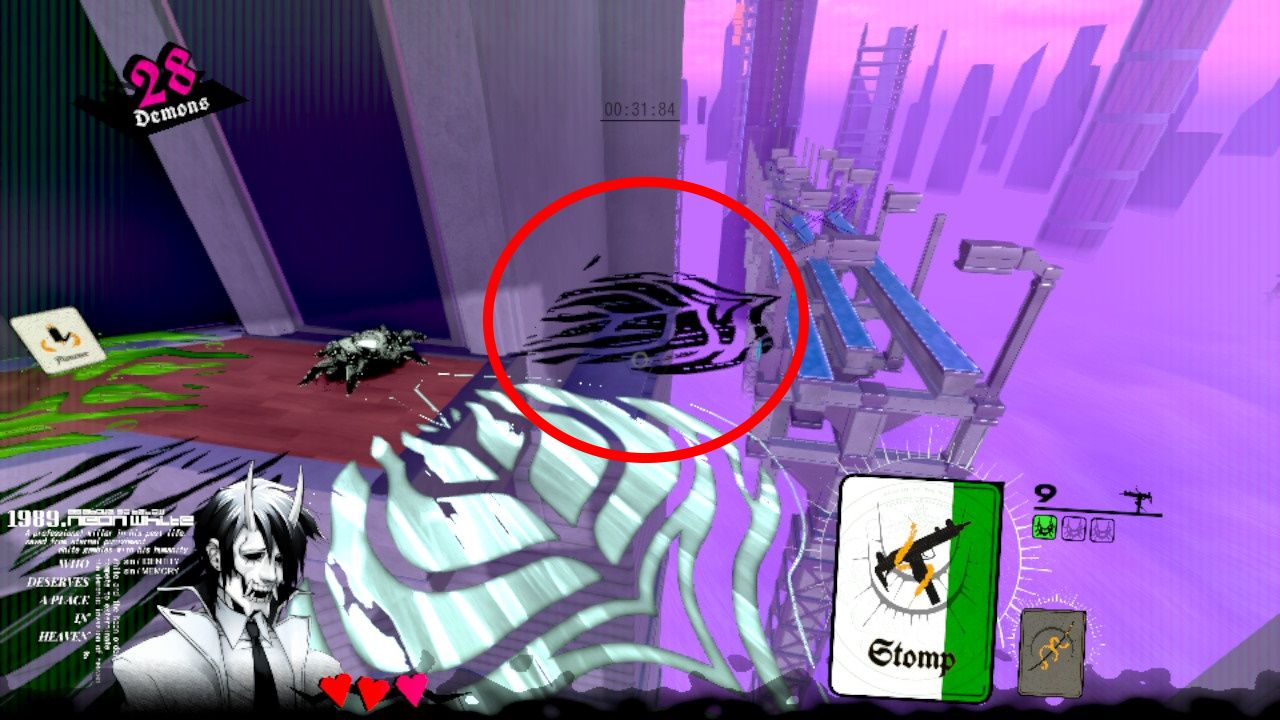 There is a section of this stage where you will encounter those landmine demons. However, with the second landmine demon, you are going to want to land on the section pointing to the right (opposite the green section). Make sure to angle yourself in the direction of the canals (as this can be a tightish jump). This shortcut will lop off a reasonable section of the stage and have you onto the next stretch of canals. This is a quick and easy shortcut that will instantly improve your clear times effortlessly. 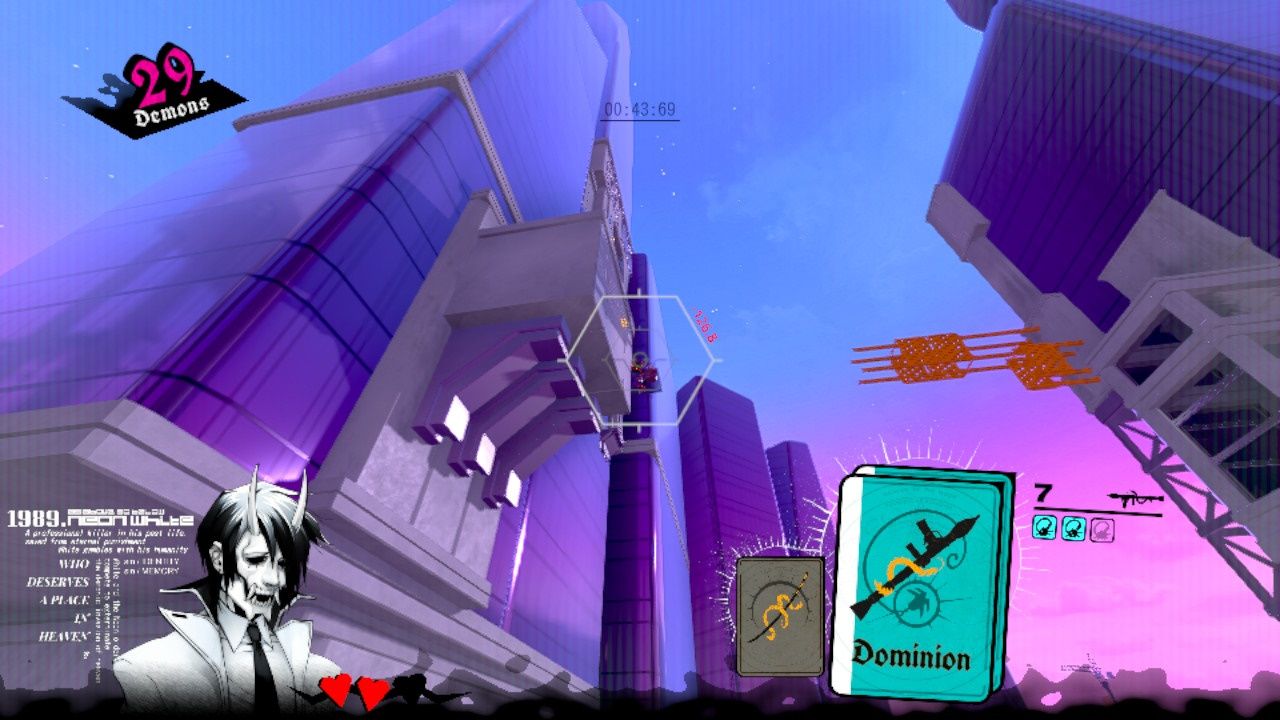 At the end of this stage you will encounter one of those yellow demons. Typically, you would zipline over to the distant building, blow up some red barrels, and then float down into the room with the exit. However, for the shortcut, we are going to just scale the building on the left with our rocket launcher's discard ability.

Once you reach the yellow demon, you can fire a zipline at the structure on your left, and then zipline your way to the cluster of red barrels just below the stage's exit. It is easier to hit the zipline if you use the momentum you get when launching into this area. Just make sure you shoot the yellow demon at some point as you are ziplining around. You can even do it from the exit. 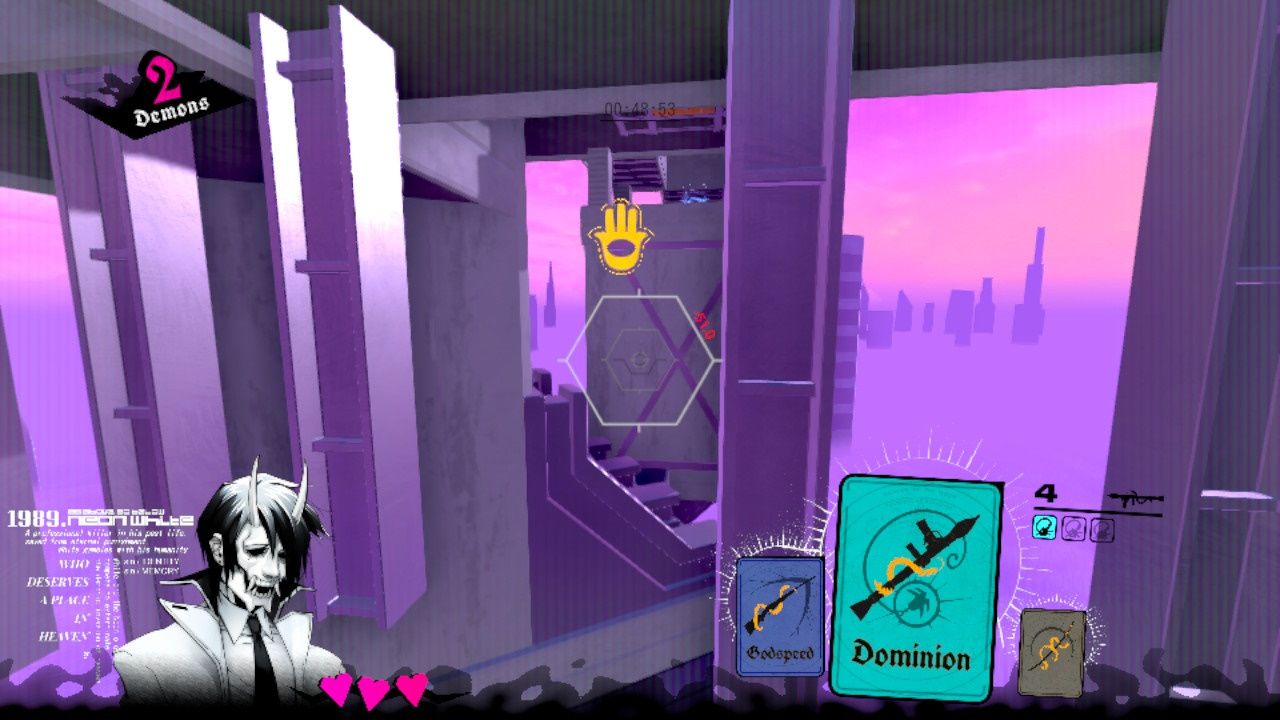 Complete the stage as you normally would. Once you reach the final section of the stage with the balloon demons, you would typically scale up them, then zipline your way further up, breaking through a number of glass walls before you eventually slam down onto the level's exit. However, for the shortcut, once we are finished with those balloon demons, we are going to dash under that area and zipline our way to the level's exit. This is another massive time saver. 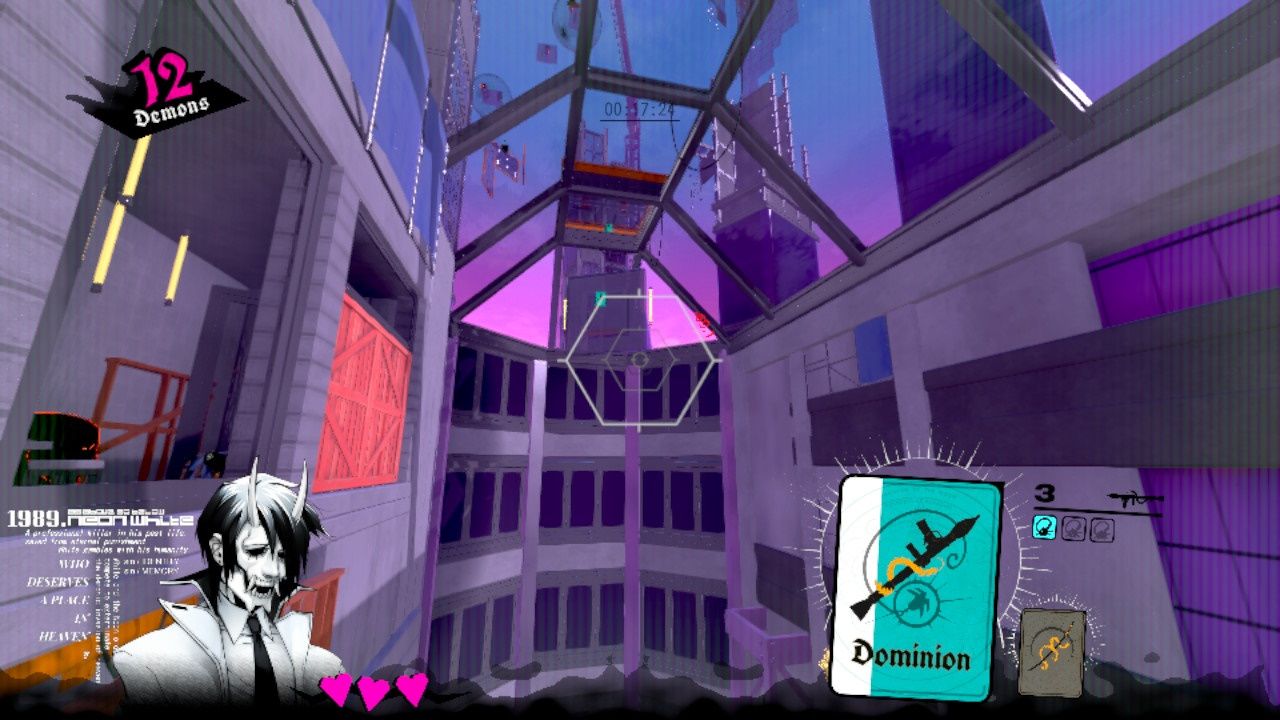 This shortcut is right at the beginning of the stage. Instead of following the balloon demons into that tight hallway with the mimic and blowing through the red door, you are going to bounce off of the final balloon demon, shoot the red door from the outside, and zipline up to the grapple point above. This shortcut skips that hallway section altogether. 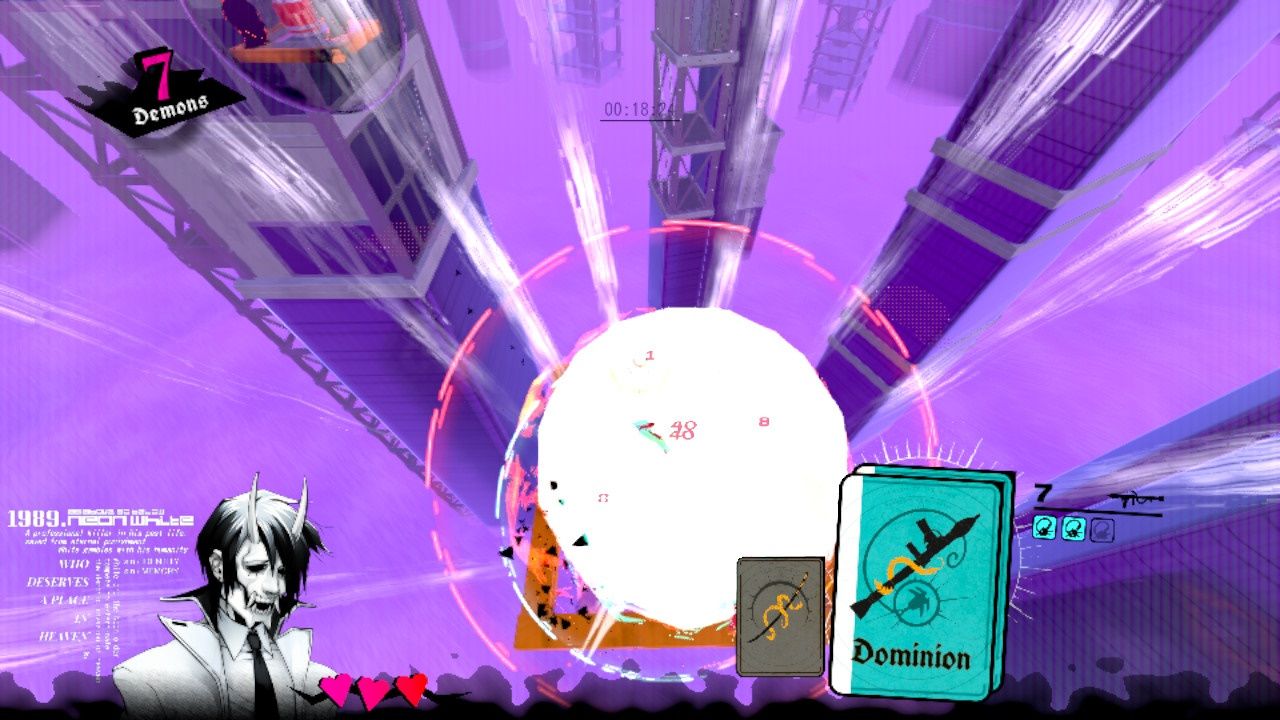 This breezy little shortcut will shave a couple of seconds off of your time, which isn't exactly huge. So, that means that it won't be doing the heavy lifting for this stage. At the end of the day, you are going to need to refine your runs to get this platinum.