With Neon White's final stages, we are given the tremendously powerful Book of Life. This opens up your traversal options in a shocking manner. It may even be a little overwhelming at first. And, naturally, with this incredibly potent new tool, the game is granted the ability to cleverly hide more gifts.

Some of these gifts are genuinely very sneaky. Most of them really aren't about split-second reactions or finger dexterity. Instead, they are about discovery and careful inventory management. But worry not, we have done all the hard work for you and will show you the way to each and every gift these stages have to offer! 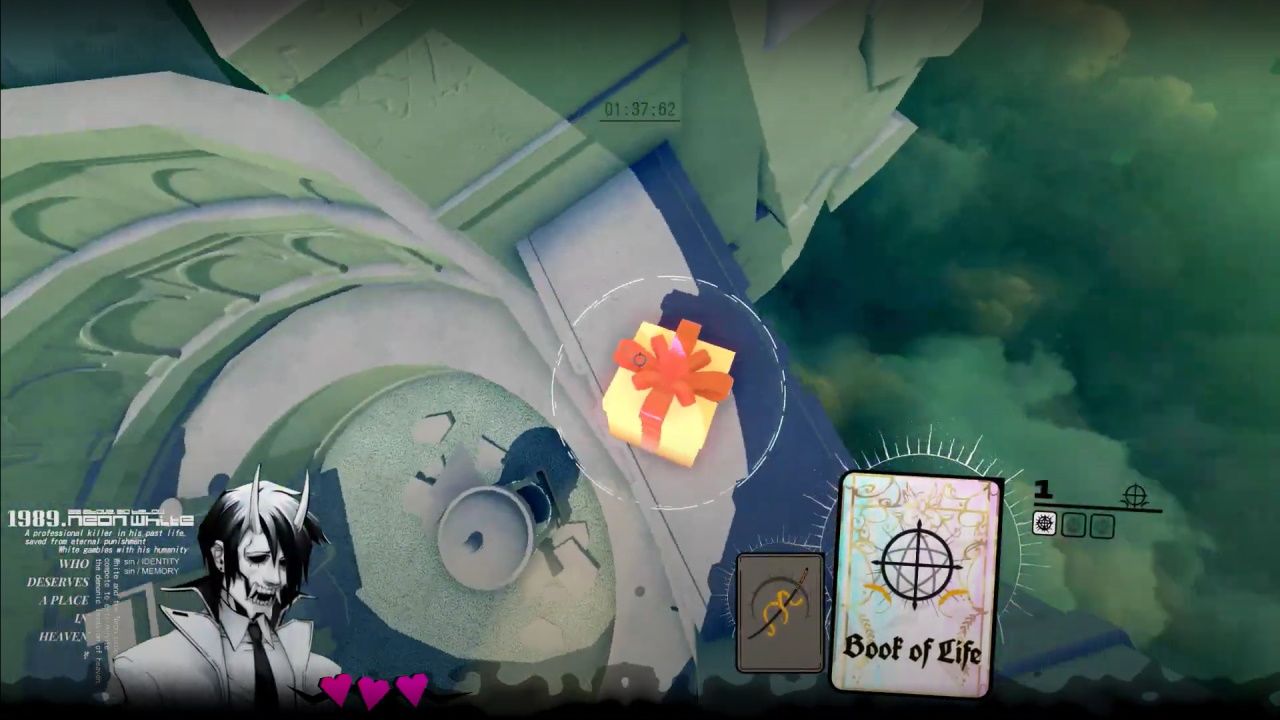 Complete the level as you normally would. When you get to the circular room at the end, with demons encircling you, you will be able to see the gift in a window high above the pavilion. Use the Book of Life card to blast through the demon who is in standing in front of the open window. Then, just teleport from balloon demon to balloon demon on your way up to this stage’s gift. You will now be the proud owner of a box of Cigars. 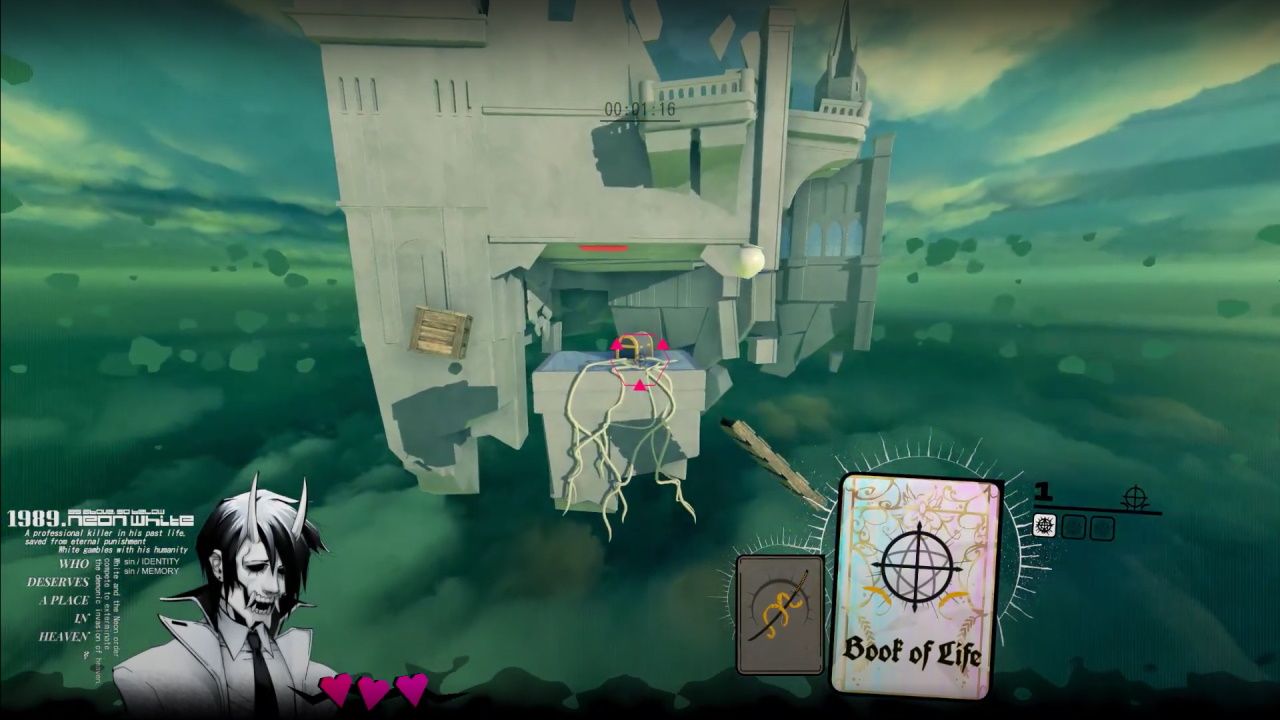 This is a pretty easy one. This gift is right at the beginning of the stage, on top of the building in front of you and to your right. All you need to do is teleport to the chest, which will give you the shotgun and ricochet you off it, now use the shotgun’s discard ability to dash up to the ledge above. The present is right here. Grab the bottle of Perfume and you are done. 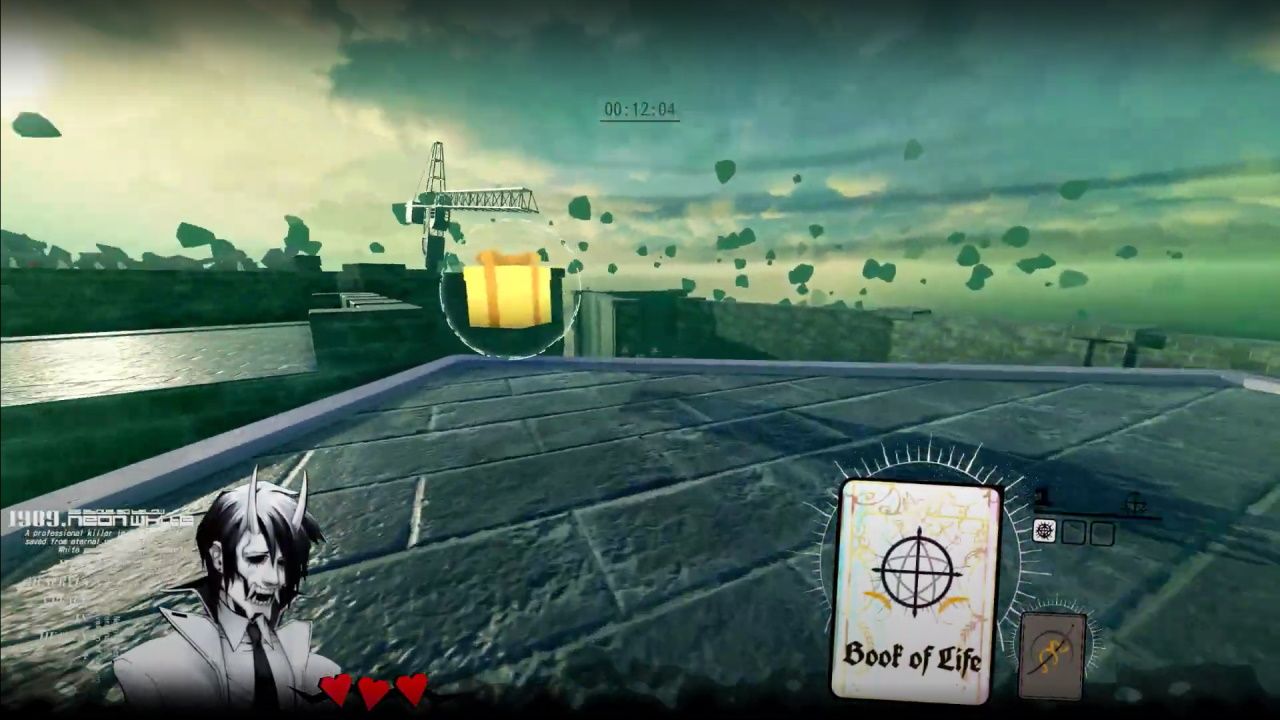 Play through the level, teleporting from demon to demon, sailing past the canals. However, make sure you hold onto the handgun. That means you need to switch it out after you take care of the yellow demon. Just use the Book of Life card to teleport to the landmine demon. 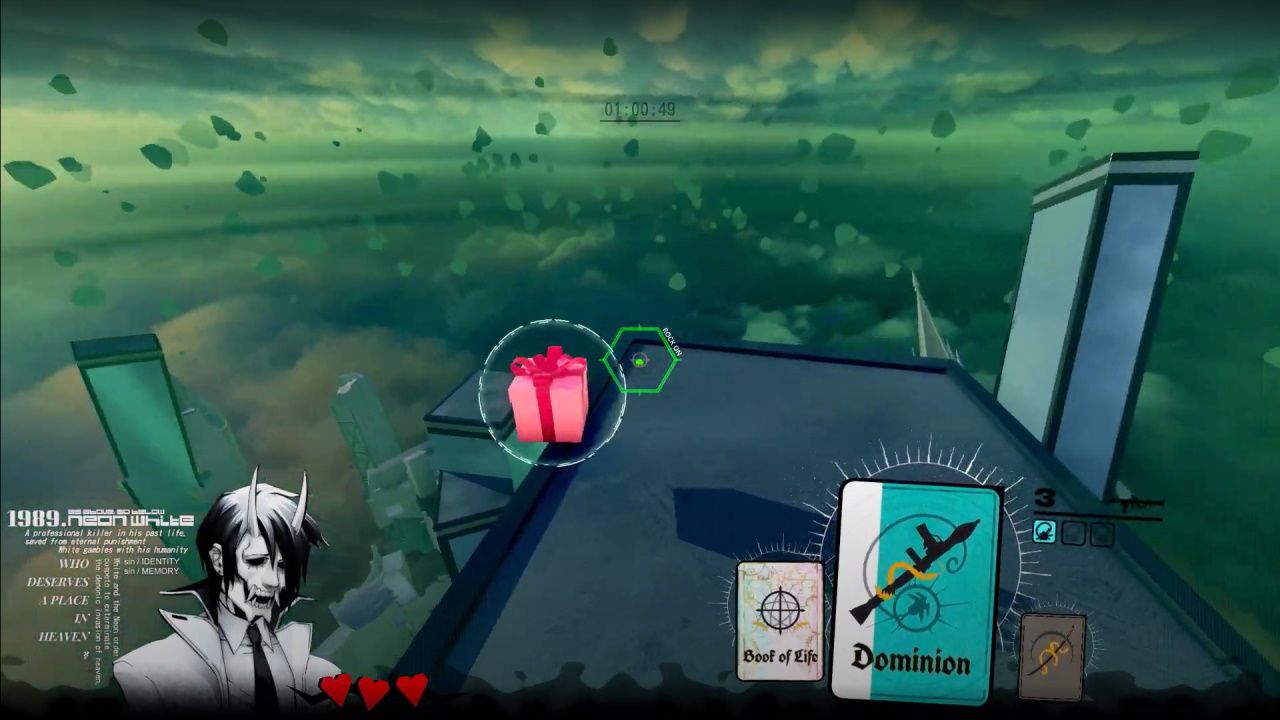 Play through the stage as you normally would until you get to the section with the treasure chest. Don’t use the rocket launcher’s zipline ability. Instead, jump toward the tower, and then rocket jump up it to get to the next treasure chest.

You want to do this in three rockets so that you can have two rocket launchers left over. Now, open the chest with your Book of Life card. All you have to do now is to use your rockets to scale the building. When you are down to a single rocket, discard your two remaining rocket launchers to zipline up the rest of the distance. You will be rewarded with Perfume. 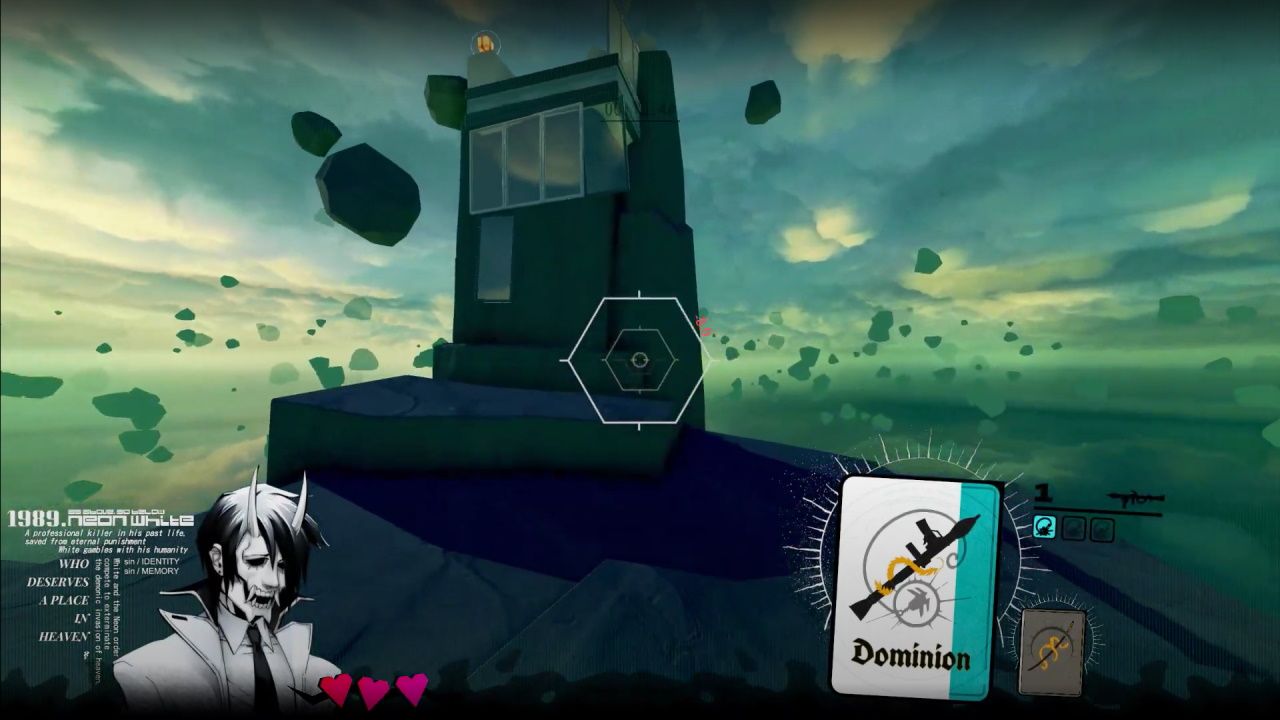 Once you have done this, turn around. You will see the present on a floating island in the distance. Just jump your way over to that island by discarding the handguns. You will be rewarded with the Cigars. 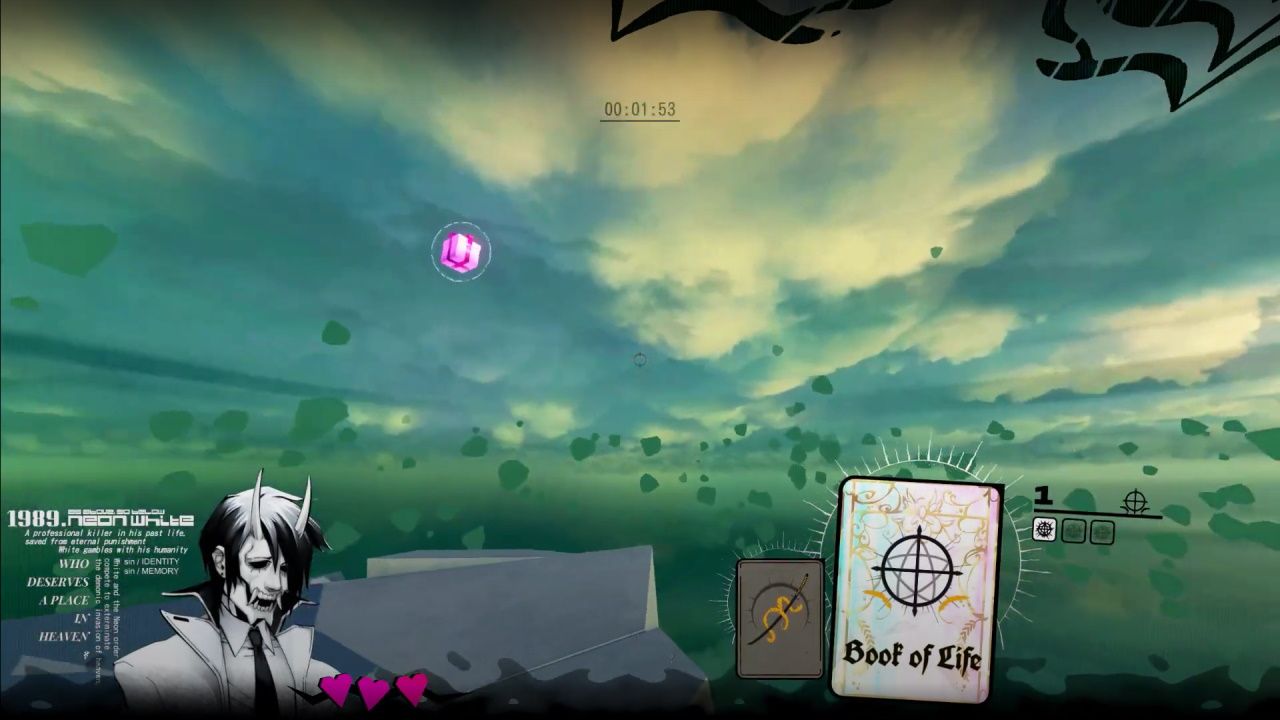 Yet another super sneaky present! This stage's gift is directly behind you. At the beginning of the stage, when you see the landmine demon on the ceiling, jump toward it, then spin 180 degrees midair, so that you are facing where you started. At this point, the tendril opposite to the green tendril should be highlighted. Now, use the Book of Life card to teleport into the center of the landmine demon. This will send you flying straight into the gift. You will grab the Tattletail Toy as a matter of course. 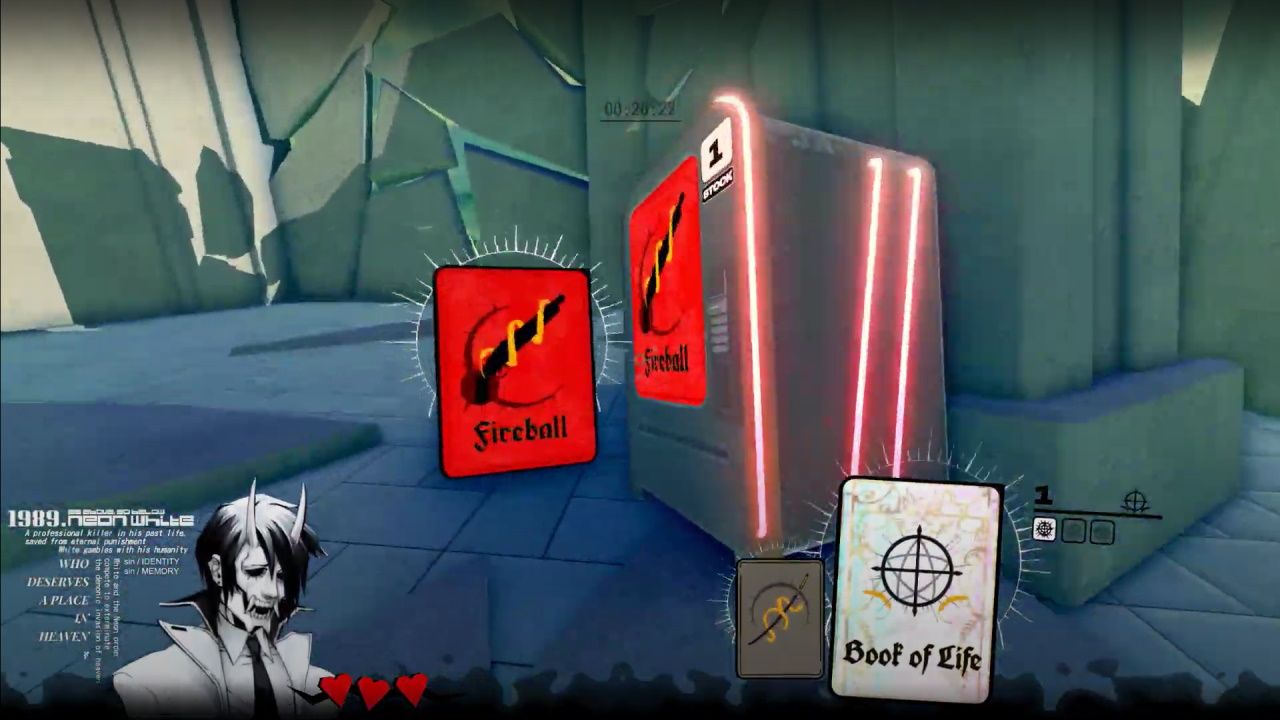 Play through the stage normally until you come to a place where there is a blue demon and a shotgun vending machine. Use the Book of Life card to kill the demon. Now, make sure you fully exhaust the vending machine. From here, you are going to want to platform along the rubble that lines this room. You will then be able to hop over the wall at the top and take out the final tripwire demon attached to the giant red door. 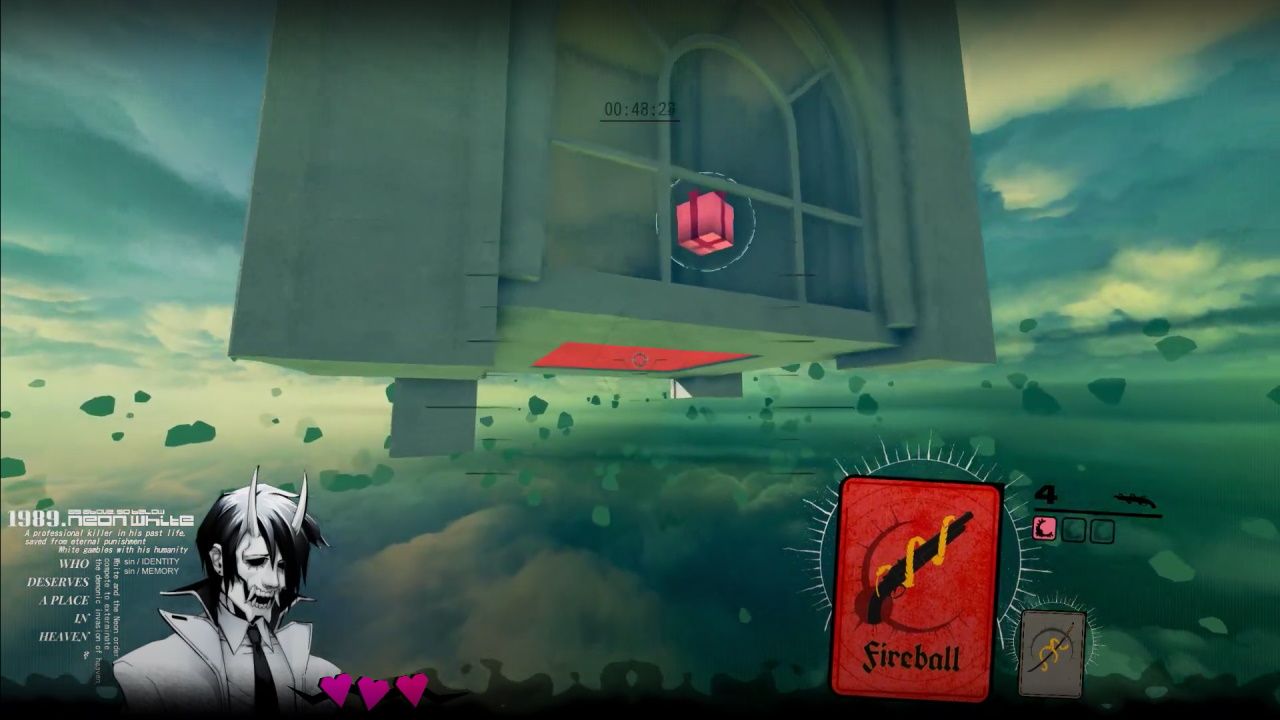 Now that the door has been cleared, you can use the Book of Life to teleport to the demon standing where the door had been. In the next area, you will see the gift sitting in a room that has one of those red trapdoors. Just fireball your way through it and you will grab the Perfume. 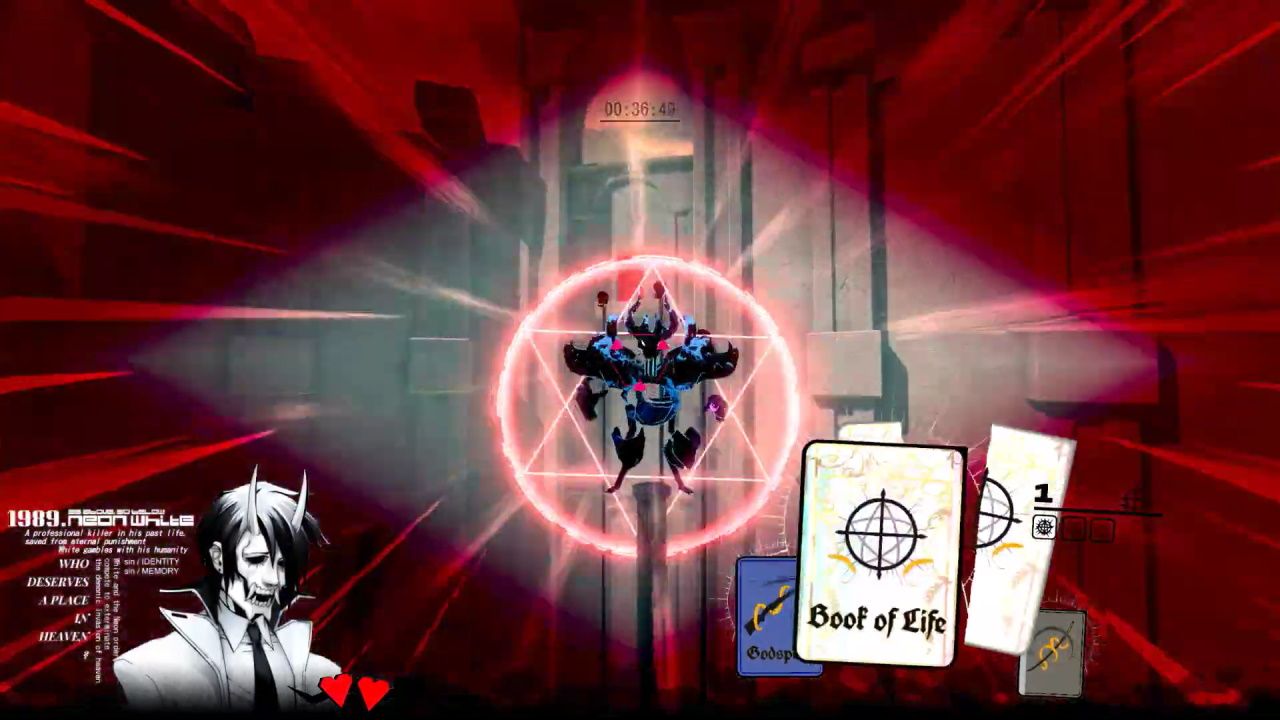 Play through this stage normally until you come to a barred red door. Blow through the door, and you will find yourself high up, in an open courtyard of sorts. There are a bunch of those dreaded demonic heads resting on pillars alongside two blue demons. Those blue demons are what we are after! 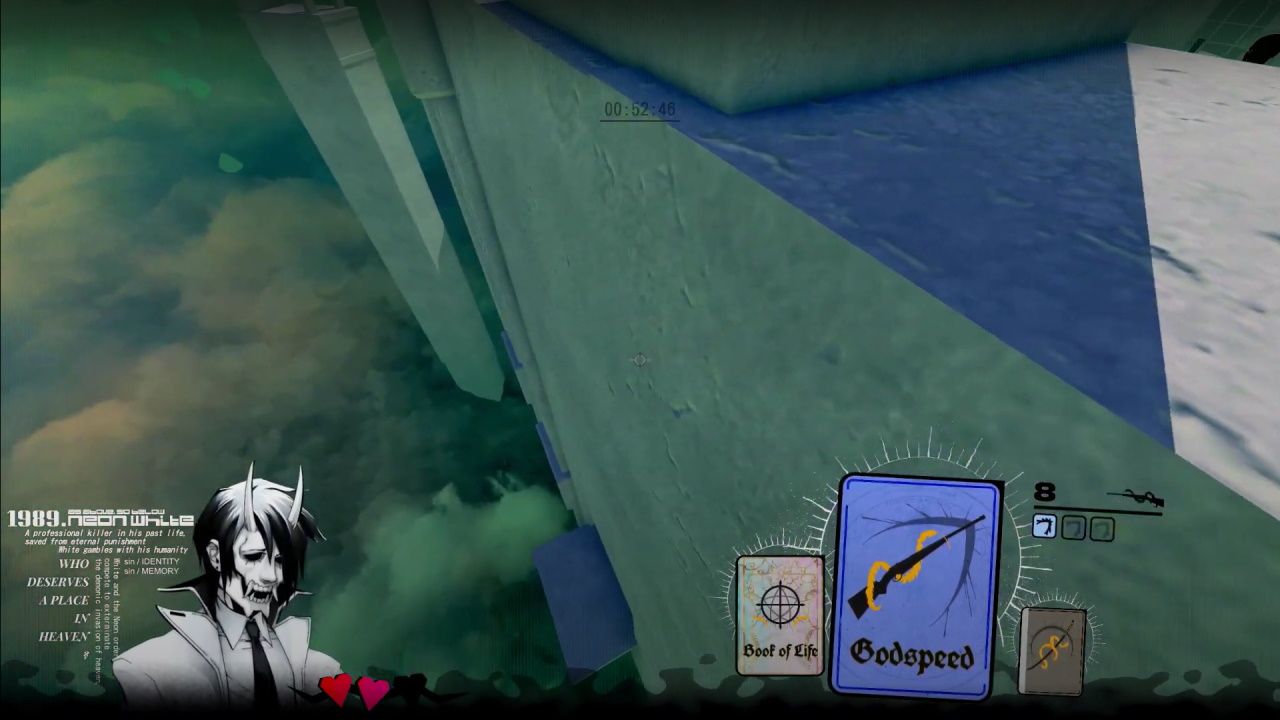 Use the Book of Life card to take out you from demonic head to blue demon, to demonic head, to blue demon. Make sure you are swapping out your cards when you take out the blue demons, as you don't want to accidentally discard one of those rifles! 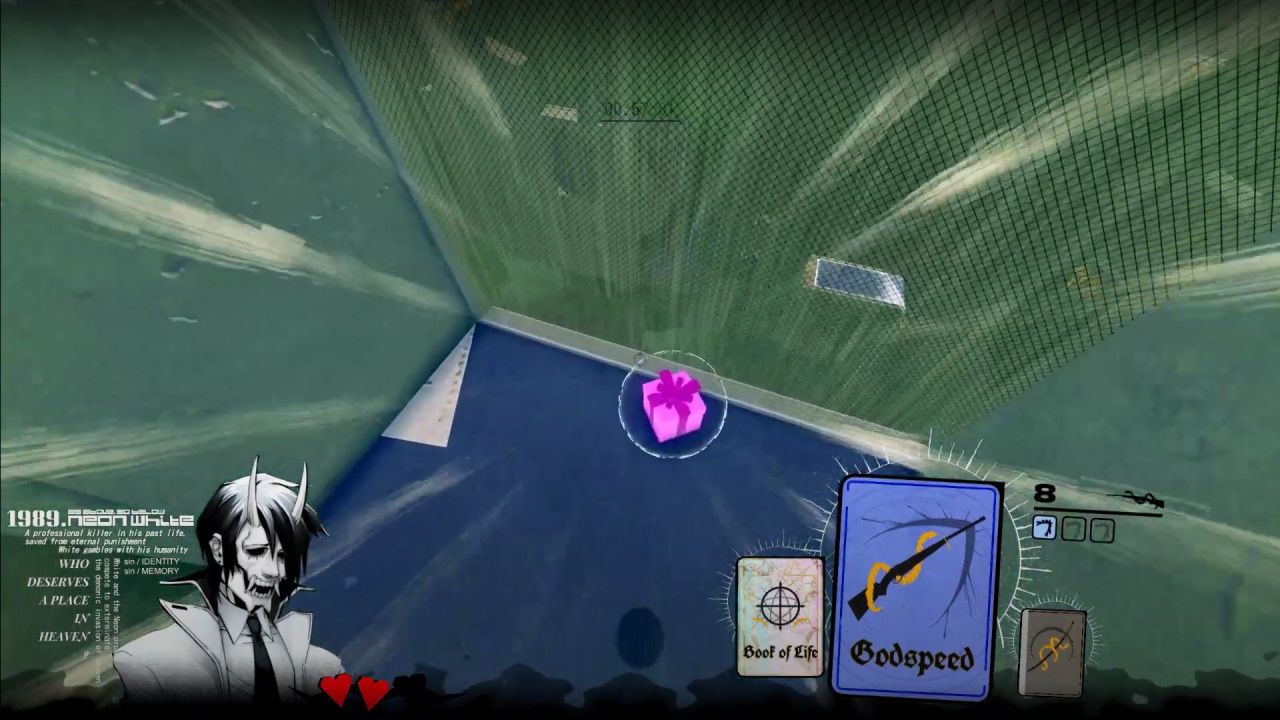 Now, once you have both sniper rifles, turn to your right and discard both cards to get to the wall with the arches. Move to the right on the outside ledge until you see a section of the ledge jutting out farther down. Jump down to the ledge to get the present. For all your trouble, you will obtain another Tattletail Toy. 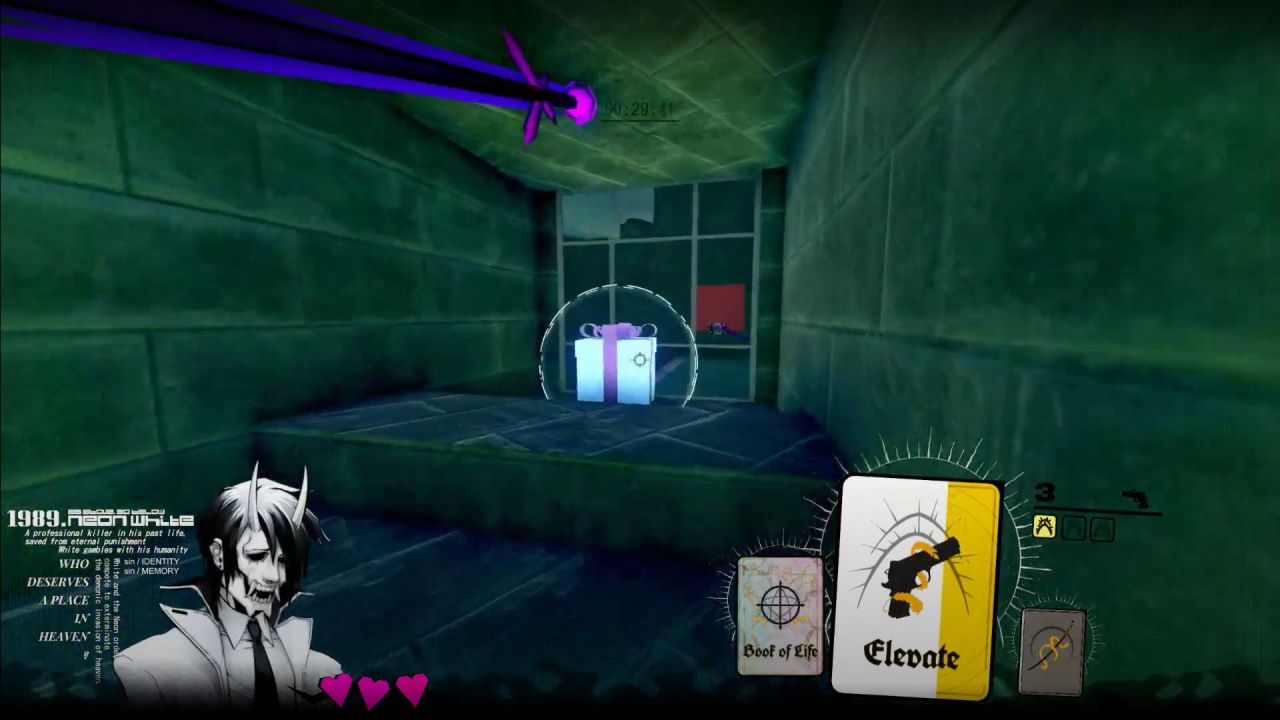 Very early in this stage, you will encounter a series of three red doors. For the first sequence of red doors, you want to take the one on the left. Now, the middle door in the next sequence holds the present. However, it also has a bunch of tripwire demons behind it.

You are going to want to head around behind this room and shoot all the tripwire demons from the window. Now, take out the tripwire demon and just waltz in to claim your prize. You will be rewarded with the Lucky Cat Statue. 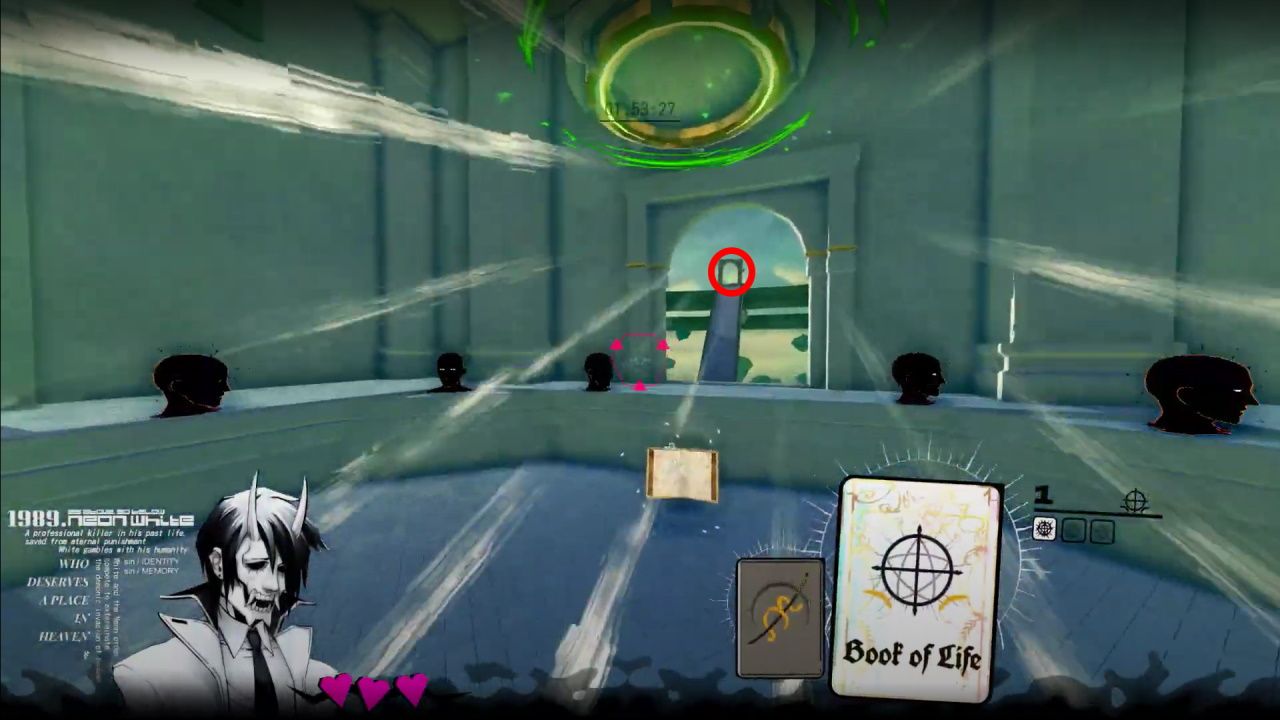 Despite being solidly on the long side, Marathon's gift is actually reasonably simple to get your hands on. Just play through the level until you get to the endpoint. Once you are in the room that has a semicircle of demon heads around it, take out the heads on the left side and go through the open window and along the path to that familiar green hand. 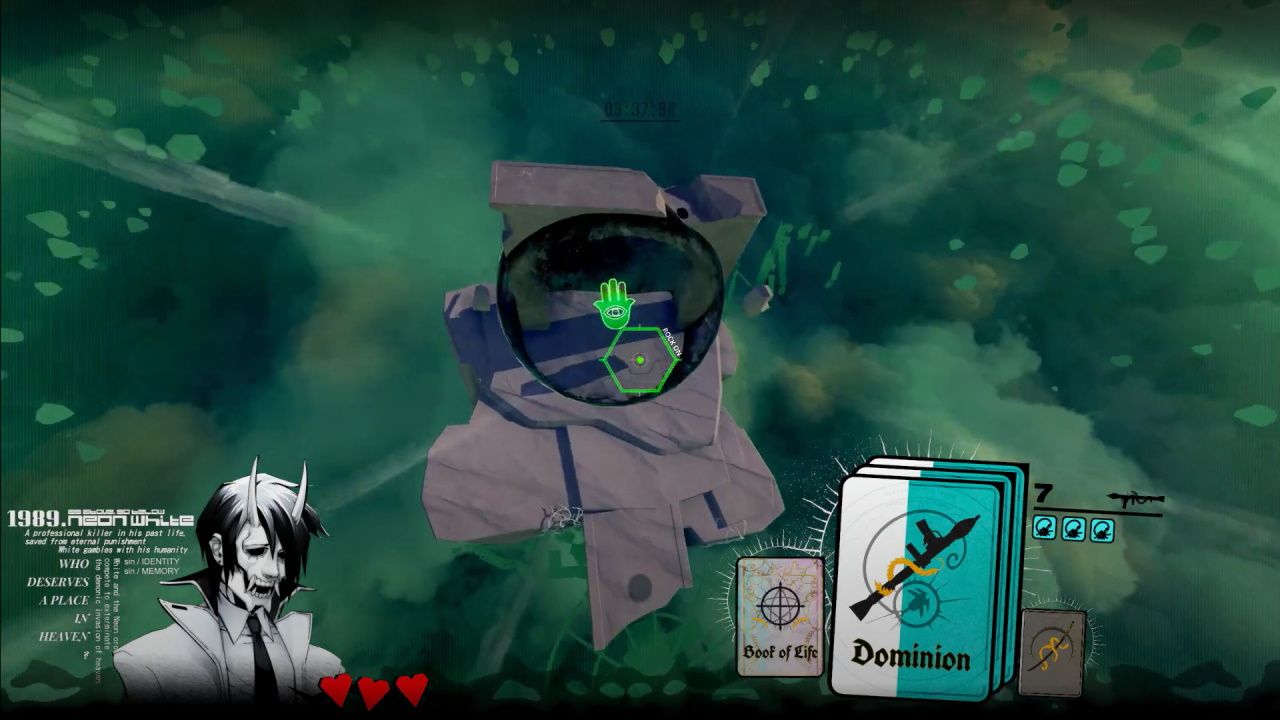 After getting the green hand, continue platforming up and around the building using balloon demons, exploding barrels, and every weapon you have encountered in the game. Eventually, you will get to a ledge that has a ton of rocket launcher cards on it. Pick up the cards and use them to scale the tower in front of you. After you reach the top, use the two balloon demons to get over to another green hand. Now, chase the ghost until you grab hold of the Strange Coin. That is it. That's all of 'em!