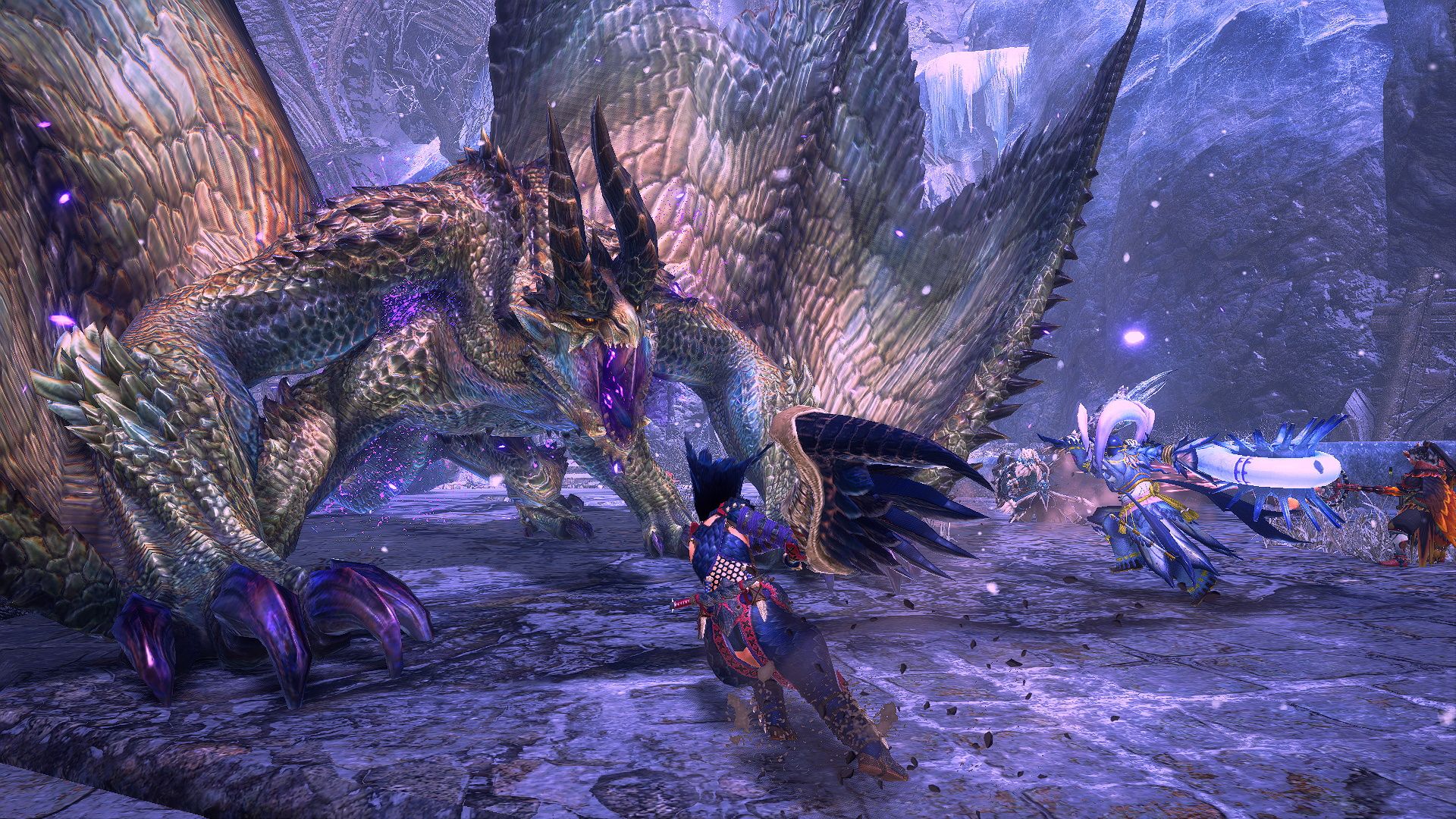 The Nintendo Switch (and PC) exclusive Monster Hunter gets its first big paid-for expansion and a spooky new Halloween theme.

It’s four years now since Monster Hunter: World finally made the franchise a hit in the West and given it had it its last major content update some time ago we’ll probably hear about a sequel relatively soon. Capcom will likely want to take their time though, as the subsequent success of Monster Hunter Rise, for Switch and PC, suggests they’ve finally discovered the secret formula for attracting a mainstream audience. Something which is well in evidence with this new expansion.

Sunbreak is the equivalent to World’s Iceborne and while it does need the original game to play its scale is such that it feels like it would’ve been easy to turn into a standalone release. As it is though you need to have progressed surprisingly far into Rise (the 7-star quest Serpent Goddess of Thunder) to even access the new content, so this is absolutely not the place to start for new players.

The story continues on directly from the parent game and, inevitability, revolves around the appearance of a new monster. This leads to the arrival of a knight from the kingdom of Elgado, which in turn ends up with you travelling to her homeland to help with a different monster. Or to summarise: there are monsters and you hunt them.

Considered by many to be the best in the series, Rise had such a huge volume of content – together with fun new gimmicks like a grappling hook, animal mounts, and Tower Defense style mini-games – that it was able to appeal to both veterans of the series and those that have never played it before.

As implied, that’s certainly not the pitch for Sunbreak, which is aimed squarely at those that have played Rise before, and played it a lot. The new town hub of Elgado looks like something out of medieval Europe, rather than Japan, but functionally it works exactly the same, as you pick up quests from a town noticeboard, some of which move on the story and some of which you do purely for the thrill of the hunt and the bounty of loot.

Monster Hunter is not a role-playing game, in that you never level-up, but its gameplay loop does revolve around constantly discovering and upgrading new weapons and armour, which use resources primarily obtained from downed monsters. Often a new armour set or weapon will require you to defeat the same creature multiple times, especially if you’re after rare loot drops, but all of this is taken at your own pace and rarely required by any of the missions themselves.

You dictate the direction and nature of your adventure, with the game featuring a number of large open world wildernesses, teeming with life of various levels of aggressiveness, and filled with secrets and unexpected vantage points. Rise was already one of the best looking games on the Switch, especially for a third party title, and Sunbreak does nothing to upset that status with its two new areas.

The first is an impressively dense jungle and the second is centred around a huge castle – that almost looks like something out of Elden Ring, with its poison swamps and snowy mountains. The jungle one is a remake of an island from Monster Hunter 2, which might seem a little disappointing, but unlike the original this one isn’t split up into separate areas, and while it’s relatively small it does contrast nicely with the sprawling castle area.

Sunbreak introduces a wide range of new monsters, from some that are just minor tweaks on those already in Rise to returning creatures from previous games and brand new ones just for this expansion. Traditionally, the lower level monsters tend to be more dinosaur-like, while the boss style enemies are usually dragons, but here the triumvirate of big bads including a rock monkey called Garangolm, the werewolf inspired Lunagaron, and the vampiric Malezeno.

As you might gather, there’s a distinct Halloween theme to Sunbreak, with Elgado featuring lots of impressive looking gothic architecture, and while this doesn’t seem the best time of year to be going with such a setting it does add a welcome degree of cohesion to the overall package.

As usually happens with Monster Hunter expansions, Sunbreak also introduces the new Master Rank tier of hunts, focusing on more difficult versions of monsters from the parent game. This addition is nowhere near as lazy as it might sound, as most of the monsters have been tweaked with new moves and reactions, and there’s lots of new armour and weapon upgrades tied to them.

One notable change is the sidelining of rampage missions, which is surprising given how much promotion they got in the original, but this is no doubt a reaction to their mix reputation amongst fans. Rampages were at least a new idea though and while Sunbreak is very good if you simply want more of the same, unlike Rise it doesn’t really introduce any new concepts of its own.

The closest is the new follower quests, which involve a computer-controlled hunter tagging along with you. They exhibit some surprisingly good artificial intelligence, from setting traps to switching weapons, and it’s only disappointing that they can’t be selected as bots to fill in for normal multiplayer quests. They do turn up in a more limited number of other missions though and seem destined to be a major part of Monster Hunter in the future.

Also new is the ability to switch between two different loadouts, including completely different weapons, whenever you want, without going back to camp. That’s a very welcome addition, as is the ability to manually set the abilities of your cat-like Palico companions – rather than just trying to find the perfect randomised one to suit your needs.

These are small additions though, that are not enough to headline a paid-for expansion, even if this one is very generously priced given the amount of content. It’s just a shame that none of the new monster hunts have much of a twist to them, despite the unusual designs, and with no new modes or game-changing weapons this is a notably less ambitious expansion than Iceborne. In terms of quality and quantity it’s just as good as ever but it doesn’t manage to rise above its peers.

In Short: Not the most ambitious Monster Hunter expansion there’s ever been but it’s still able to introduce a host of new creatures and features to the always engaging formula.

Pros: The two new areas are good and so are all the new monsters and the, slightly unseasonal, Halloween theme. Followers and follower quests are a good addition and there’s a mountain of other new content.

Cons: Unlike Rise itself there are few new ideas and Sunbreak is formulaic even just within the history of Monster Hunter expansions.